I have been following events in relation to Hurricane Matthew, across Florida as a large urban population with no experience of severe hurricanes comes to grips with the reality of hurricane season in the Sunshine State. I should say this whole Matthew drama has been bizarre right from the Caribbean where 17 people have died, and looks to continue in that vein as the storm moves north and changes its path all over the place.  We in Key West are outside the danger zone even though we expect steady winds of a mere 20 miles per hour today with heavy rain for accompaniment. So my observations come from a comfortable spot where life continues as normal. Weird but true- so far- life is uninterrupted in the Lower Keys. 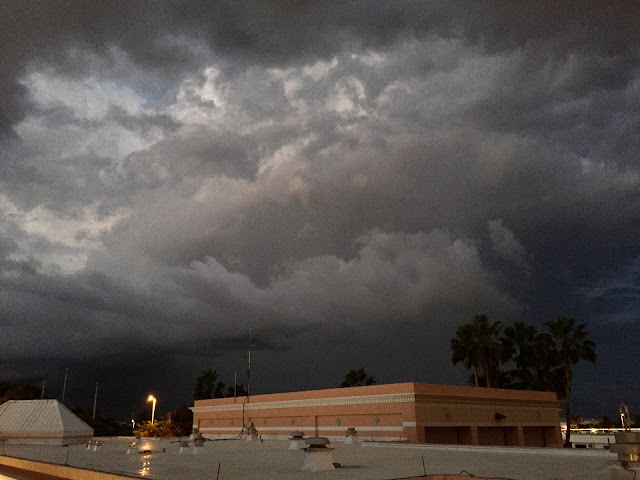 It's been a long time since a major storm hit Florida and this is a state where people come and go, and from what I've heard grocery shelves are emptying and fights are breaking out at gas stations. It was nice knowing what to know what to do on Monday before the herd got spooked when we bought extra water and filled our vehicle's gas tanks as a precaution. We keep dehydrated food in the house for just these emergencies and so all that is left is to sit back and carry on carrying on. I have to say I am tired of hurricanes, and you'd think after a ten year break I'd have had time to get my resistance level back up to face more storms. But I'm not ready. It's not a matter of being afraid it's just a matter of being annoyed at the interruption of my daily routines. In the face of all the catastrophic destruction wrought by this storm my preoccupations seems embarrassingly banal. But that is the truth of this situation; you feel glad to be spared and embarrassed by your relief. 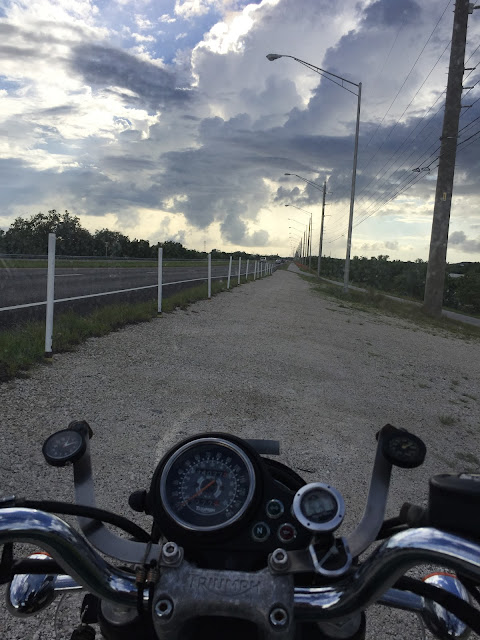 I'm better off than some people because I have been through this before, many times. This hurricane thing has knocked Monroe County's school superintendent for a loop, and its quite funny to watch. This poor guy has made it known he's applied for work to get the hell out of Monroe County and now he's stuck with dealing with half a storm, and it's clear he has no clue. He's the guy at Publix buying potato chips and red wine while forgetting batteries and  drinking water. The problem is that only half the Keys are currently under a tropical storm watch so the superintendent, in violation of normal practice and tried and tested tradition, decided to only close the schools actually affected by the weather. The unintended consequence of this bizarre decision is to throw the school calendar into chaos.  The school district is used to weather related closures, all schools are, not just for hurricanes but for blizzards forest fires or flooding, whatever your local natural disaster may be. So now some of the schools will use make up days at the end of the year and some won't which is causing the entire district to scratch their collective head figuring out how to manage this administrative cock up. All he had to do was close all schools for a day or two and add a day or two to the end of the school year exactly as anticipated. Which makes one really really glad the school board hired this unhappy man to lead the schools. I hope he makes another school district somewhere else very happy very soon. 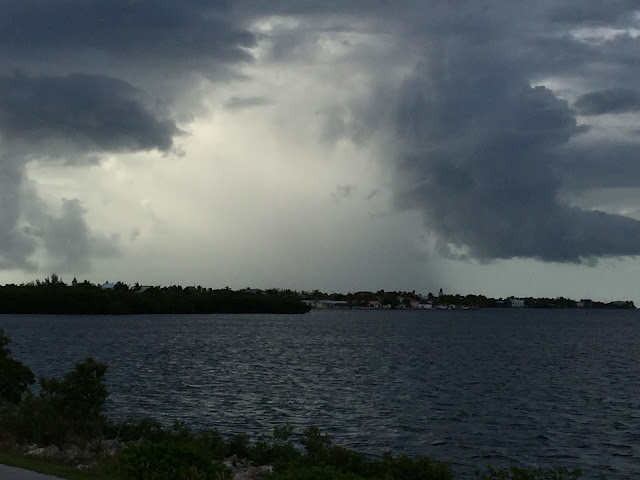 When you tell people you live in Florida they get a rather negative stereotype in their heads of a retirement community of querulous old people driving badly and complaining about the cost of everything. Florida has tried to change this image of itself and has attracted some younger people tired of snow but a state terrified of raising taxes apparently cannot sustain world class educational opportunities and can't attract top flight business innovators judging by results so far. It's a shame because if you do find a place to live that you like and a job to sustain you, life in Florida is pretty sweet. Life in the Florida Keys is something else entirely, sweet yes, but a world apart from mainland Florida and in a  crisis like a major hurricane the differences become apparent. This photo of Costco crowds came from the British Sun newspaper which is apparently quite interested in our discomfort: 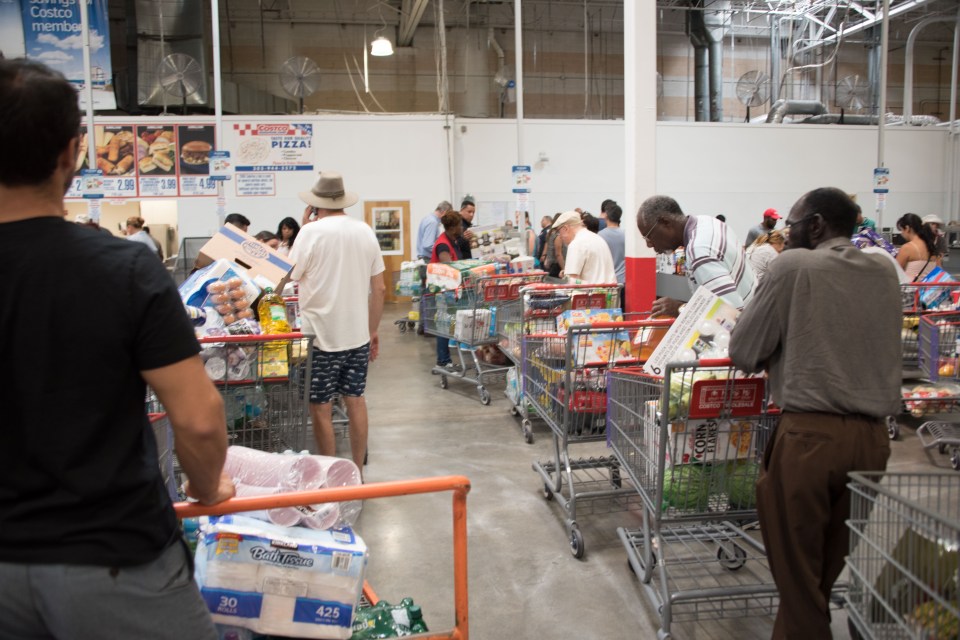 It may be partly owing to the smaller population in the Keys, 75,000 permanent residents, it may be that in these islands one lives closer to nature, but my observation is that the art of survival even in this modern age is better honed in the Keys than on the mainland. When asked I say I live in the Florida Keys to differentiate myself from the mainland, the world gored mercilessly by Carl Hiassen in his novels lampooning Florida. I saw how people coped most recently with the disaster that was Hurricane Wilma which flooded Key West in a way similar to New Orleans yet we saw no looting no violence no sudden expiration of neighborliness. I figured that if I had to live through a natural disaster this place was as good as any. And now that the rest of Florida all the way up the East Coast and around Lake Okeechobee faces a truly testing time we shall see how it goes for them. Perhaps they will exceed my rather low expectations. 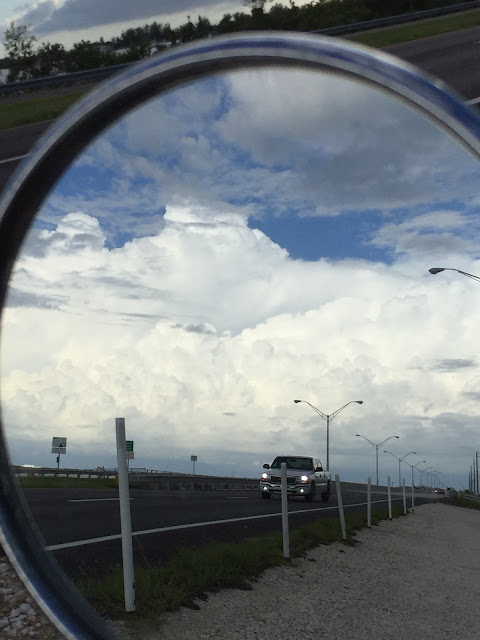 Feeling lucky to be outside the projected path of Hurricane Matthew is a temporary state of mind. If the storm wrecks Miami we lose our source of electricity and water as well as road access. If Matthew curls around as is projected for next week and comes back at Florida (!) out of the Atlantic for a second go, the Lower Keys could get raked. There are more weather systems building in the Atlantic, thus next time could be our turn; who knows...So it's never too early to stock up with supplies, too early to figure out your plan such that if the time comes you can act with confidence and come what may know you did your best.
Posted by Conchscooter at 12:00 AM 4 comments: Links to this post