I have been reading stories of boredom and indifference among people who ride motorcycles and who blog about it. Me? I have one main road to ride and it's flat and it's frequently slow and yet, jumping on my three year old Bonneville still gives me a thrill every damned time. 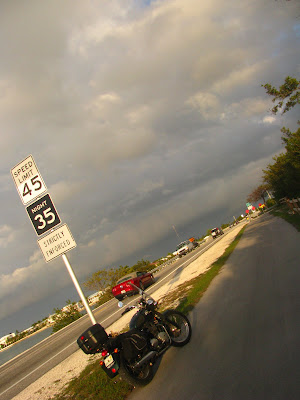 A cloudy uncertain day gave way to evening sun; my chores were done, Cheyenne was well walked and snoring, there was no reason not to fire up the Triumph and go a for a ride, just for the hell of it. Yup, riding a motorcycle is still a cheap thrill for me. 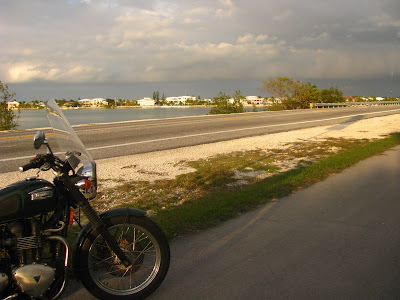 Bobskoot in Canada likes to make fun of me for not having a tachometer on my cheap Bonneville. It was known, before it was phased out, as a standard Bonneville; unlike the more expensive T100 which is still offered there is no chrome, no instrument to measure engine revs and it has a one tone paint job. I threw some luggage and a windshield on it, failed to add any chrome and chose not to modify the engine to increase the standard 65 horsepower produced by the modest air cooled 865cc twin and got riding. Bobskoot is no longer satisfied by his entirely adequate Suzuki 650, farkled and super equipped, and is looking with lust in his heart at a Yamaha Super Tenere that will cost him $17,000 (Canadian) plus delivery charges etc...etc...to reignite his middle aged love affair with motorcycling. http://wetcoastscootin.blogspot.com/ And yes he will get a tachometer and shaft drive and heated hand grips. In the US the base price for the "adventure tourer" by Yamaha is around $14,000 but here too you have to add a bunch of delivery charges. My Bonneville cost $6,000 but I had to add two grand more to get it out of the Fort Lauderdale dealership. 48,000 trouble free miles later here I am still as happy as a pig in a poke with my cheap ride on my straight highway in my corner of Flatistan. Bob's post about dreaming of a new bike got me thinking. 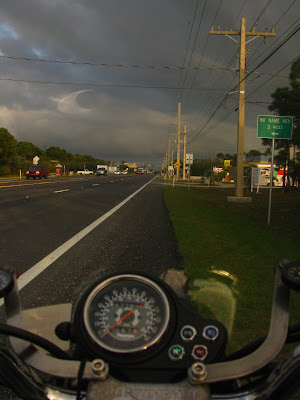 In the Florida Keys the major mechanical enemy is the salt laden environment which attacks any piece of metal with airborne corrosion. You'd think the second worst enemy would be boredom- yet somehow I still love my ride to work, I revel in the fact before I took off on my spontaneous evening ride to nowhere I was lying on my deck, sunbathing with a book on the last day of January. Then I decided the other way to take advantage of the mild weather was to ride in it. So I did. 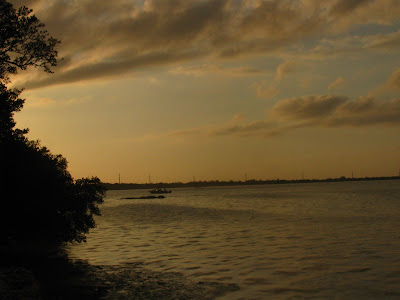 Snow? Ice? Mountain passes? Twisting curved roads? What are they? 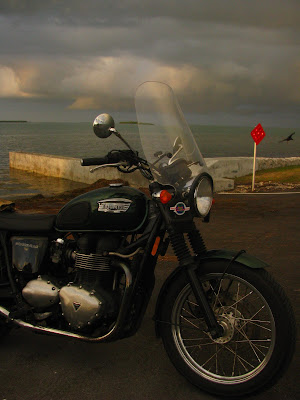 My wife is bound and determined to save up enough to get us to Italy this summer, where my buddy Giovanni wants to take a motorcycle trip to the Alps, through Italy, France and Montecarlo. I wonder how we will pull such an ambitious vacation off in the year of living on the edge of international economic meltdown, but it's a nice dream, to imagine a few weeks in summer of riding twisting mountain roads with my last best childhood friend. Meanwhile I drift along, skirting tropical downpours watching the drizzle build up on my windshield as I ride. Rain is no problem in the Florida Keys, as I carry lightweight waterproofs and temperatures rarely get into the hypothermia range. Rain is just a little challenge to spice up the ride. 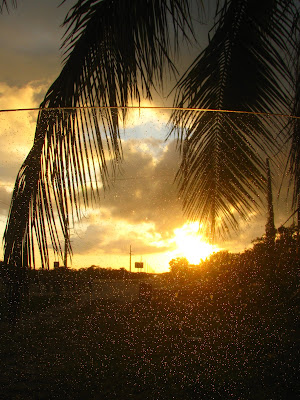 Look at this view! How could you ever get bored with this? 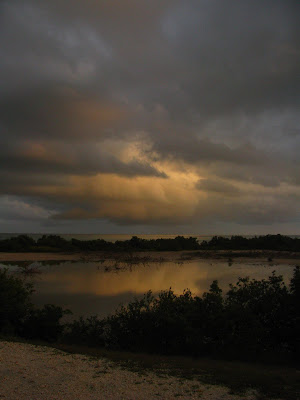 I know the Overseas Highway is flat and straight, as is much of the riding for 600 miles (1000 kms) north of here, and the winter traffic is crowded and slow, but still, I cannot help but get that cheap thrill from simply going for a ride. 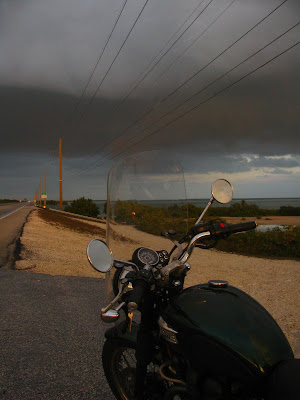 Even when it's time to commute on the same familiar 26 miles into Key West I pull out onto the Highway wondering what the ride will bring. Some evenings I am feeling in a hurry for no reason and I spend the ride looking for a gap to pass the bored texting driving drones; other evenings I am feeling lazy and slow and I drift along at the speed limit or less counting the leaves on the passing mangroves, pulling aside to let faster traffic pass me by. Some days it rains, some it's windy, some it's sunny and some it's a bit of all three. 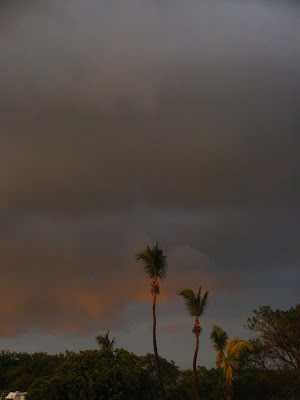 I think it's the curse of our age, a curse we are going to have to remedy somehow as money and credit dry up, that of needing fresh stimulation to retain the freshness of the experience. It's no wonder our Lords and Masters on Wall Street call us consumers, because that is all they want us to do, consume. And now, at least here south of the 49th parallel, most of us have lost the ability to consume thoughtlessly and wildly. Now we have to remember to feel and taste and enjoy with what we have, not with what we crave. Not hard to do in the Fabulous Florida Keys. 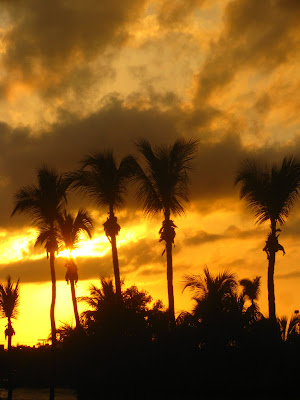 I said to my wife I wanted to "upgrade to a Triumph Sprint GT," a new sport tourer with 130 horsepower, heated grips, a sporting ride for the 21st century at a modest $13,000. She looked at me real old fashioned and I burst out laughing. She continues to get cheap thrills from riding her 150cc Vespa around town; we are not by nature "upgraders." She's not alone; I spotted this red one in the trailer park on Ohio Key but I'll bet it has far fewer miles than hers. We owe nothing on our rides and basic third party insurance only (we pay for our own damage) is $80 a year for both machines. 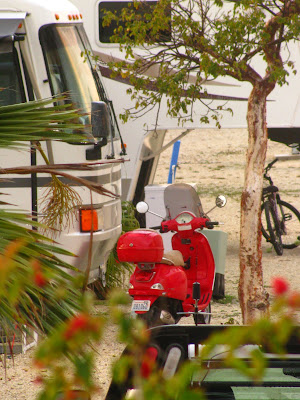 On the motorcycle forums I read not much about the pleasure of the ride and much more about the need to modify. In the Bonneville I have found the perfect companion, not too fast, not as economical as a 250cc, so I do tend to think of my 500 pound parallel twin as a bit of a luxury at a modest 45 miles per gallon of regular gas but it looks right to me, as a motorcycle should look and it does everything I ask, which is to start and run and stop without complaint. Day after day, because my need to ride never grows less. 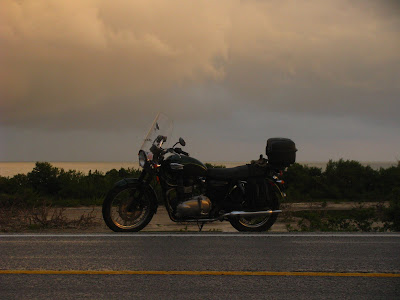 I am grateful that my Ford Fusion is there, a reliable comfortable car to do the dog carrying duty, and the Miami shopping duty and the cross country family vacation duty, but when I am alone and commuting or traveling for pleasure it's the Bonneville that does what I need to do. I had been planning an Everglades ride this past Monday but I felt under the weather and my sage wife told me I should postpone it until I felt myself again. In a couple of weeks perhaps I'll take a day to sit in the saddle and roam the South Florida wilderness. This week I barely got beyond Long Beach Road on Big Pine... 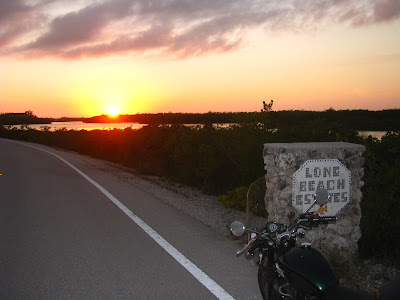 I have a couple of Iron Butt rides under my belt, including my raid to Binghamton, New York, in 35 hours last freezing cold October. My Bonneville and I cruised the Catskills immediately after I finished the timed ride, enjoying hills and curves and twisties. Then I finally got to see the famed Hudson River, riding it's banks on my trusty Bonneville. What a bike, it does it all for me. Some people need to own lots of bikes, one to tour, one to ride fast, one for the dirt, one for around town. My Bonneville is an even bigger bargain when you consider that like it's forebears it does everything adequately. I would ride to California tomorrow if I had the time (and it were summer, let's face it). 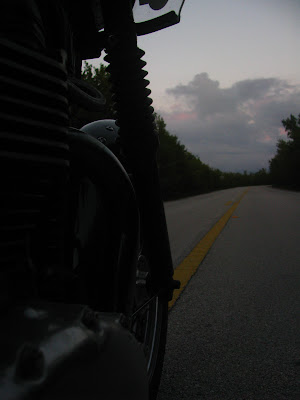 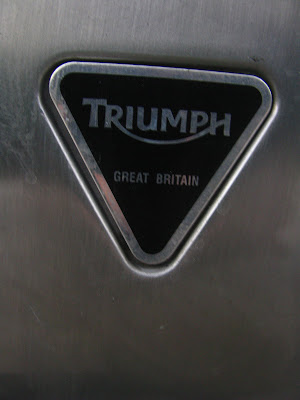 Some people think there isn't much to see in the lower Florida Keys and they may be right. I managed to put thirty miles on my bike with no effort in the hour before darkness and I scrapped a planned tour of No Name Key and north Big Pine because we simply ran out of daylight and I wanted to go home and cuddle my dog. 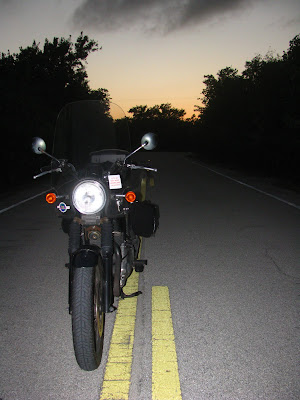 I always manage to see banal things that fascinate me on my tours of the Lower Keys. Imagine owning enough coconut palms and sea grapes to fill this many trash cans with debris. A fortune invested in trash cans alone...never mind paying someone's effort to fill them. 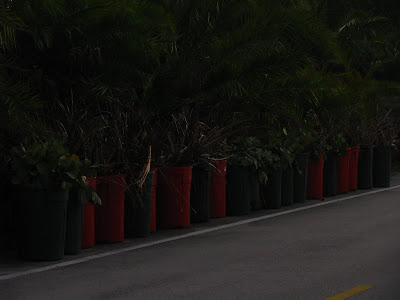 I met an experienced Iron Butt rider once, a man who routinely rides the continent in eleven days covering 11,000 miles on the Iron Butt Rally on his supremely well equipped Honda Goldwing. He told me of renting a scooter in Key West once and not managing to put 60 miles on it in the week he rented it. I can put sixty miles in a day on a scooter, and I have, just from the need to feed my curiosity. You need a large imagination to live well, a sense of humor helps, and curiosity they say keeps you young at heart. 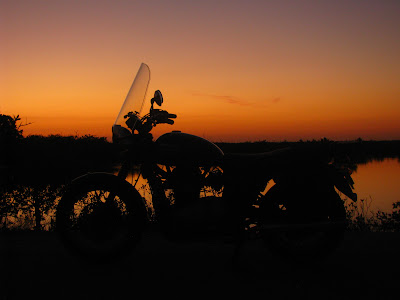 Back home the sunset was once again doing it's thing. I poured a glass of wine, dragged out my book and gave Cheyenne a rawhide. She crunched, I read and all was well with the world on my deck. 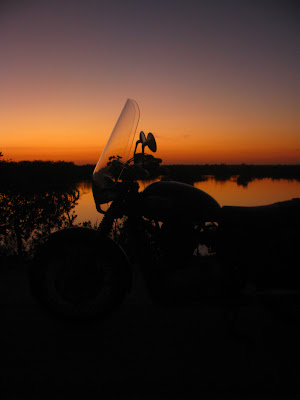 Consume away folks, this is all I need, a carburetted, rusty, well worn Bonneville and a road, any old road will do, to ride it on. Hell this bike even copes quite nicely with gravel, a useful trait as money is running out for public spirited endeavors such as street repairs and highway paving. 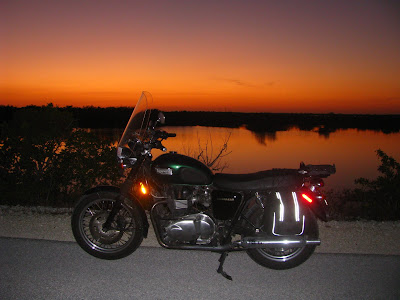 And here I am, home sweet home, hidden by trees, off street parking under the house, the promise of more sunshine tomorrow. 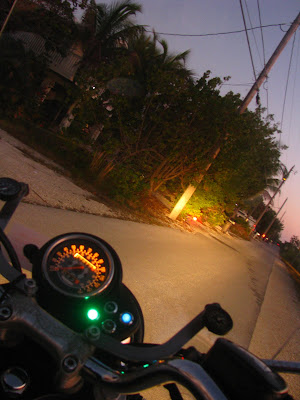 My mother bought me a Vespa 50 forty years ago, in the summer of 1970 or thereabouts and motorcycles have made the long drudgery of daily driving an adventure to be enjoyed ever since. No cell phones, no music, no satellite positioning whether I want to be found or not. Not safe, not pigeon holed, not doing as I am told as an obedient consumer. Not high visibility, not drunk, not stoned, not texting. The ride is the reward for me. Keep your 2011 models, your "upgrades" and your monthly payments. A lot of talk I hear about freedom these days has got nothing on simply riding my Bonneville. Long may it last.