On Duval Street two days ago and I saw a banner at Teaser's selling spots cheap for early purchasers,  $170 for a place on the balcony overlooking the Grand Parade Saturday night 26th October. We are starting to get in gear. 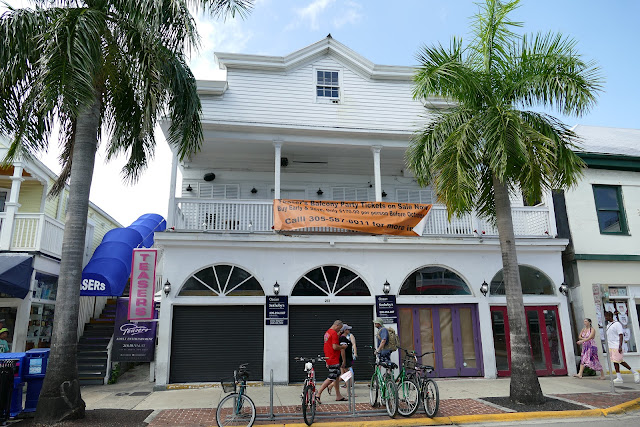 It is fashionable to hate Fantasy Fest and over a few years of deterioration there was much to dislike about a week in Key West where bad taste and nudity was the highlight of a week long public bacchanalia. A couple of years ago a new company took over running the festival and based on last year's clean up the emphasis seems to be turning to more costumes and less body parts. 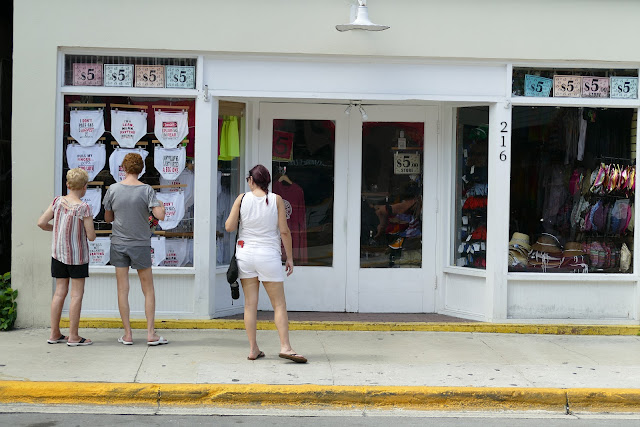 In a town proudly displaying tasteless clothing slogans on the main street, ogled avidly by some passers-by and less by others, it's not really feasible to expect Fantasy Fest to become completely tame. Despite the drawbacks I enjoy the week. I like the fact that we have a holiday all our own and though the est of the country, and indeed the world, has to keep grinding along we don't, for one short week. We can get to that "...after Fantasy Fest." 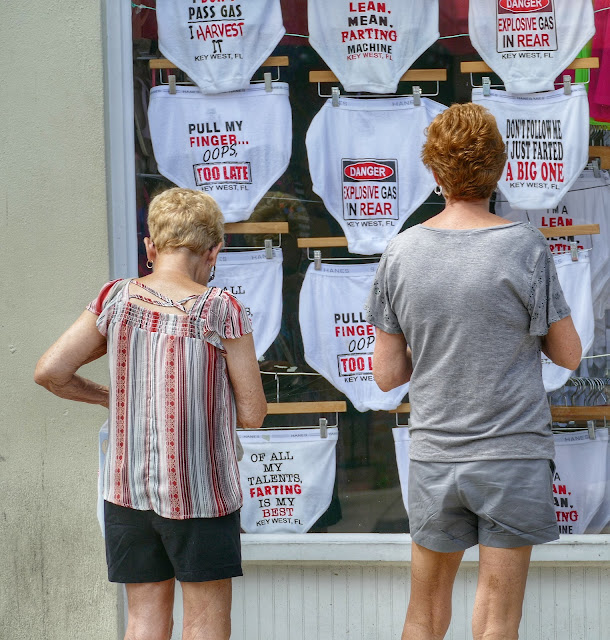 Meanwhile life goes on in Key West. Beer deliveries to Ricks is not something that should surprise. 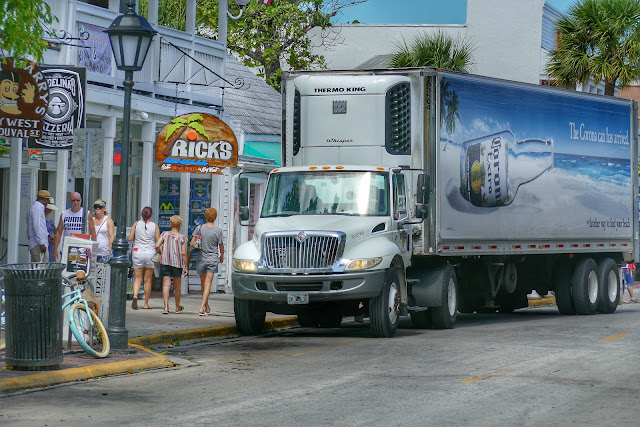 I was surprised to see President Trump hanging with his overseas buddy on Duval Street. 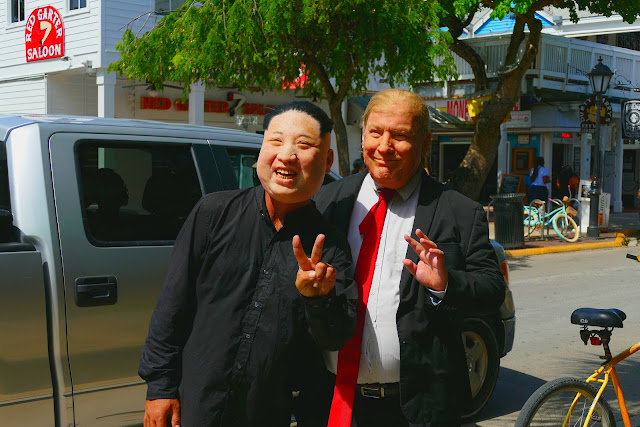 Parasols seems rather quaint, if colorful but they are for sale in one of the sunniest cities in the United States. I cannot imagine standing on the street all day making nice to anyone and everyone who may or may not look like a potential sale. Here they are across from Sloppy Joe's day after day. 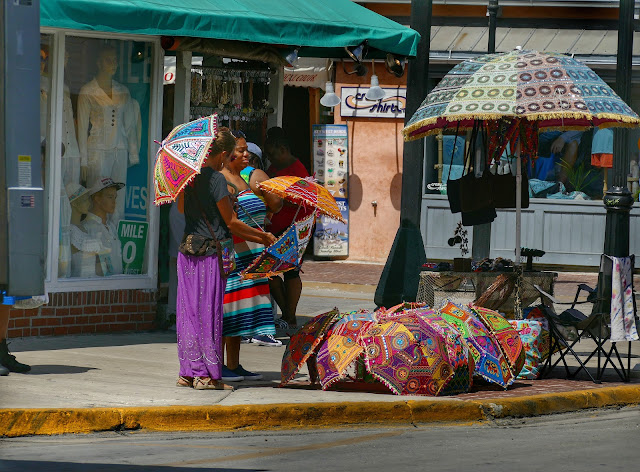 On the subject of sun exposure I saw a bunch of advertising for IV sales. Apparently having a  drink of water when you are thirsty isn't enough. Nowadays there is the option of rejuvenating with intravenous fluids. In a country where people cheerfully put heir families and neighbors at risk by ignoring vaccinations you'd think nonsense like this would be a hard if not impossible sell. As usual I am unable to underestimate the native intelligence of people faced with snake oil. 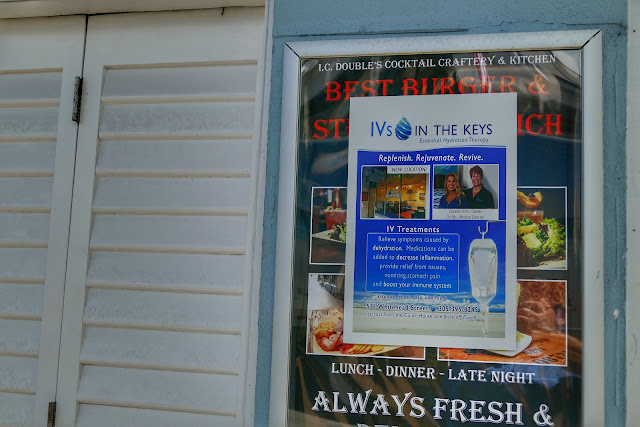 Motorcycles make men of boys (and cripples of men sometimes as we have found out) but sometimes the center stand defeats the best efforts of the uninitiated manly men. Foot on stand, hands exactly where he has them and a smooth backward motion. I've been doing it for  half a century so I suppose my thoughts on the subject of motorcycle center stands are not needed. 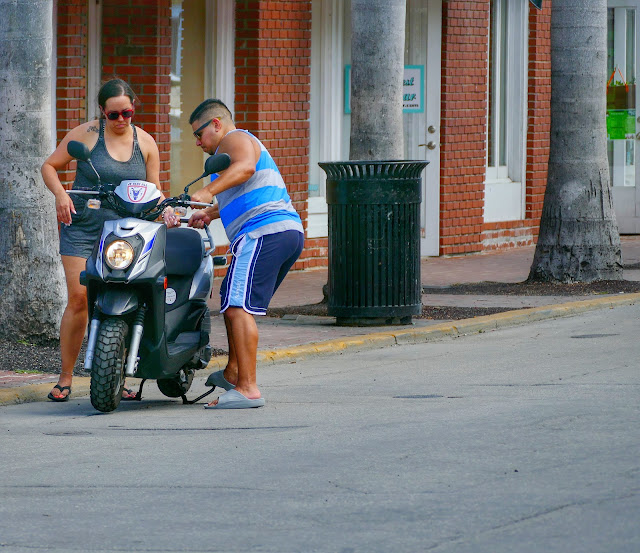 Unloading and delivering parcels isn't easy work during most months of the year. Of course my idea of hell is doing such work in a snow, but I'm pretty sure  a nice cold front wouldn't hurt about now, even though brisk north winds had been keeping humidity at bay in a taste of Fall not usual around here.. 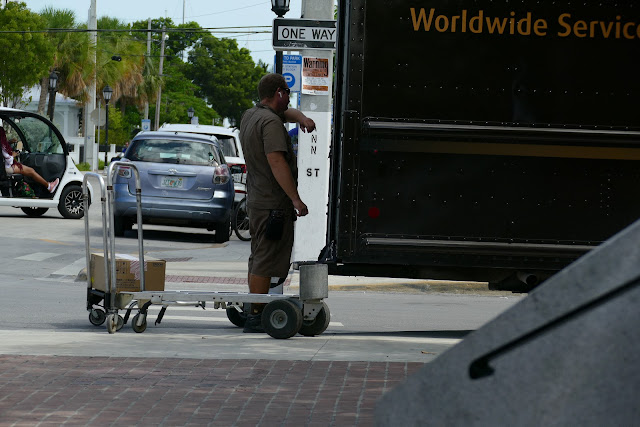 The wind has been delightful making my early morning walks with Rusty fresh and positively cool, but that is at four in the morning in my neighborhood. Large straw hats downtown have been at a disadvantage, as stylish as they may look. 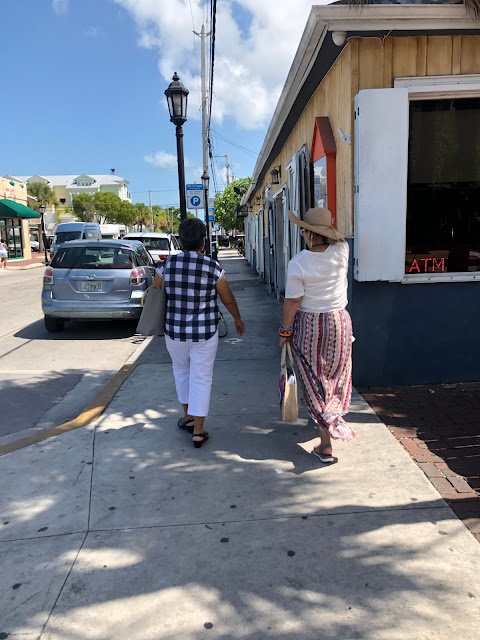 For some reason I saw  ton of heavily loaded trolleys on the streets, as this town seems unusually full. A friend of mine who cooks in a restaurant told me he is working six days a week at a time of yea he expects low volume to send him on vacation. With a baby on his plate, so to speak, he isn't complaining about the work, just surprised. 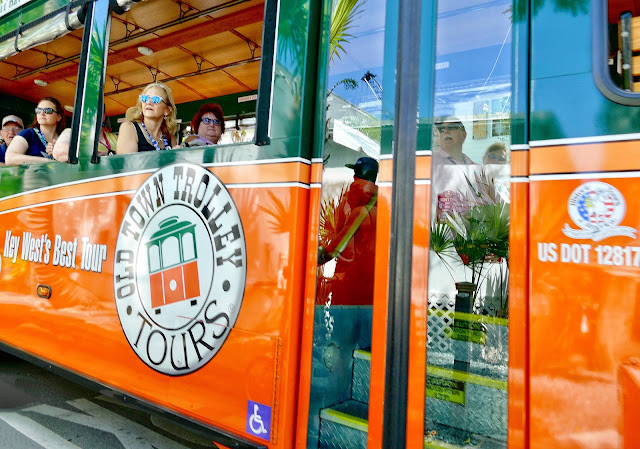 Kermit was out and about getting in on the action. I have come to love Kermit's Key Lime hand lotion. I have dry skin on my hands sometimes and his lotion is perfect. I stole my wife's bottle when my hands were hurting they were so chapped and it was so soothing I appropriated it from her bathroom and when I confessed what I had purloined she told me she hated the smell (strange woman!). I made it mine and even bought another one when that bottle ran out.  My soft smooth hands smell of Key Lime. Yum. 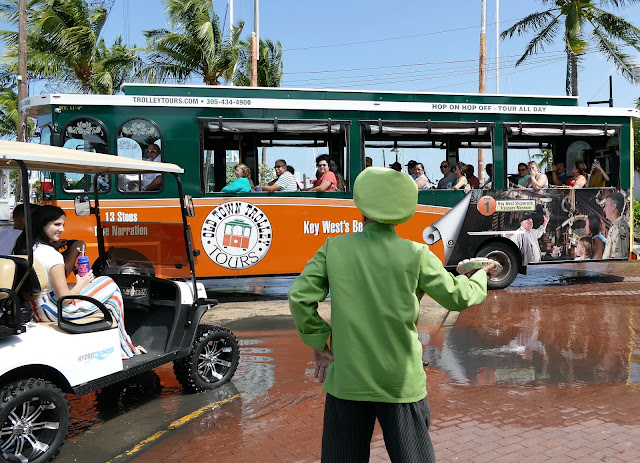 I think I'm losing my mind. I got the distinct impression Vladimir Ilyich Lenin was visiting Key West on a bicycle. The flat cap gave it away. I mean, if Trump was on Duval why shouldn't Lenin be on Lazy Way Lane? I last saw him in Red Square in 1981 and he's looking a lot fitter than the waxy sheen he had in that mausoleum outside the Kremlin. No photos were allowed so I have no proof. 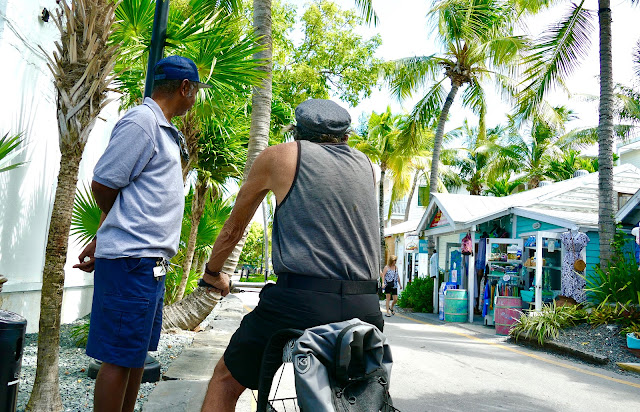 Another bizarre day in Key Weird.
Posted by Conchscooter at 12:00 AM No comments: