I have been debating dropping my disc account at Netflix, because my wife has an Amazon Prime account so we get Amazon's free TV and movie service in addition to streaming Netflix. But I am having trouble dumping the compact disc delivery service as they have tons of stuff there and old movies are my pleasure at the moment. Afternoons when my wife is at work I exercise in front of the screen as I don't enjoy exercise and watching Bogart or Peck or Heston strutting about makes the medicine of weights and  stuff go down much more easily. I learned to enjoy old movies in my young adulthood in Santa Cruz California. 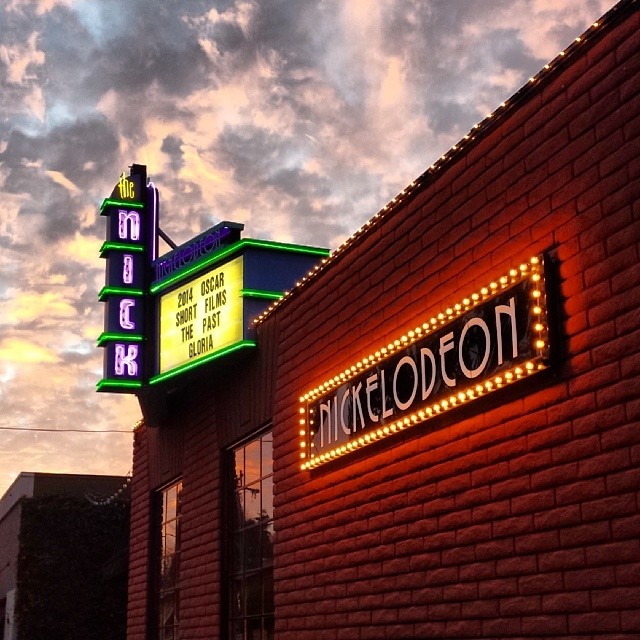 The Nickelodeon Theater was the mainstay of the University crowd when I lived there in the 80s and today the independent theater has grown to three outlets across Santa Cruz County. I was moved to reminisce about my young movie habits when I learned that "The Nick" has been sold to a southern California chain which promises to change nothing. 45 years of local ownership was a long run...And in those days the Nick as it was known had bought another little theater called the Sash Mill. I have hunted everywhere for a picture of the theater but I have none and neither does the Web apparently. I think the year of it's closure came well before the Internet so all I have left of the Sash Mill is memories. Nowadays it's a bunch of shops. Lots of University towns around the US had these repertory theaters changing films every couple of days, re-playing lots of them as we were barely learning about video tapes in those days which seemed miraculous but it took a while for Truffaut and Fellini to find their way into video stores. Besides we valued the full screen dark theater experience. It was at the Sash Mill I got my movie education and it was glorious. 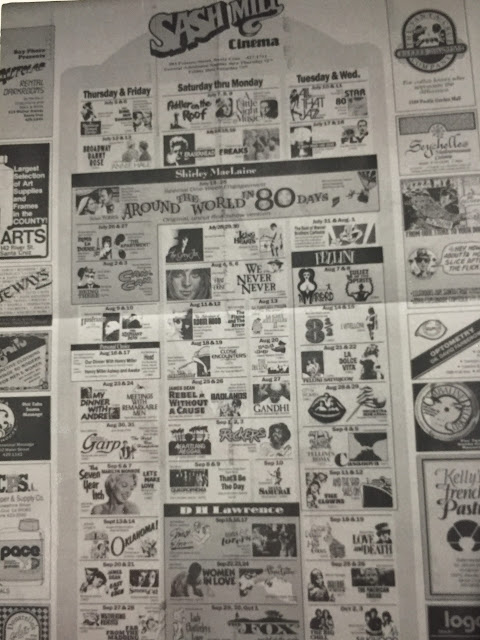 The Sash Mill was as eclectic as its audience, though by the time I got there in 1982, enthralled by the silver screen, things had settled down a bit more than Marshall Motz remembers in the memoir titled The Cosmic Lady Was Right I had learned to enjoy movies at my English boarding school which had weekly showings of alternative movies (some slight nudity!) and black and white films too, but in Santa Cruz I got to see them all, as much as I wanted. My buddy Bill got me in for free often times, and sometimes as he ran the Sash Mill we would take beer and pizza and give ourselves late night shows watching films with just the two of us in the auditorium, or perhaps a couple of other friends. I got to see all the classics, Thin Man, Katherine Hepburn, Carey Grant, comedies, adventures, thrillers and film noire. It was an education. 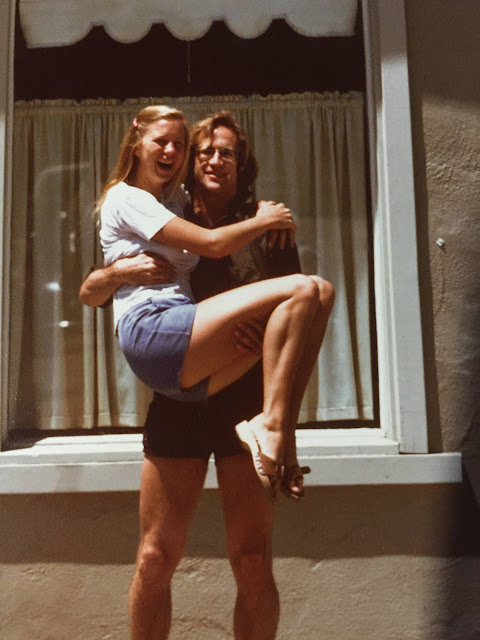 Winters in Northern California I hated. And I still do, with lots of rain and temperatures down to the forties or worse. Lots of people thought I was crazy as they had emigrated from the Upper Mid West where winters meant snow and darkness for months on end. I found this picture of The Nick on a wet winter's night on the Web, and seeing the shiny slick sidewalk reminds me of those frigid nights taking refuge from the confines of my boat cabin where I lived by watching a  movie, or two.

Eventually Bill got me a job as a janitor and suddenly all the movie houses of Santa Cruz county were available to me for free. I had no TV on my boat, nor did I want it but now I could see anything anywhere anytime and I did. It was a great time, and i didn't limit myself to movies like Erendira, a gloomy Spanish film about loneliness and despair as only Garcia Marquez could write it. I cleaned the Nickelodeon which had four screening theaters, but my first love was the Sash Mill where the old movies went to be seen and enhjoyed by a younger generation. 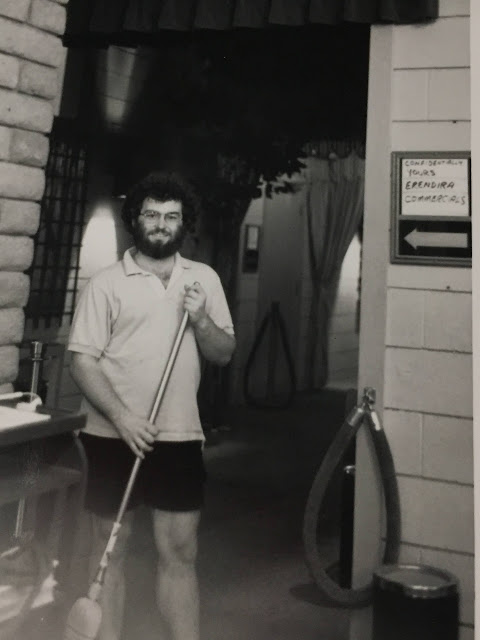 I moved up in the world of theater janitoring and became a relief projectionist though I did not get into the union before running projectors became part time work thanks to automation. I found a segment of a book Aphrodite in Jeans which describes in some detail how to operate the old fashioned projector booths, a job I graduated to as relief projectionist at the independent Capitola Theater a few miles up the coast. I went through the same shenanigans switching projectors and so forth with the same satisfaction. Here's a picture of me in the mid 80's showing probably the Jewel of the Nile which came out in 1985 and which I saw half a hundred times: 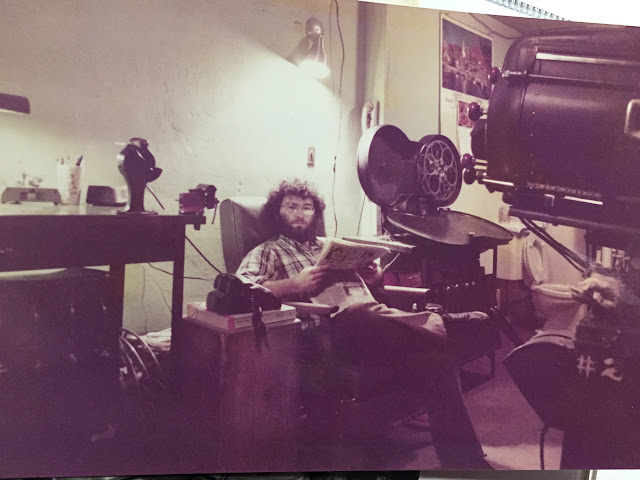 I enjoyed the Capitola Theater where the booth was lined with steel to prevent the original nitrite films in the 1930s from burning down the theater when they frequently caught fire. The booth had a door onto the flat roof and in between 18 minute reel changes I could go out and stand on the roof and look at the fog descending on the chilly waters of the Pacific Ocean and I could hear the crash of the surf on the beach, even over the traffic and party sounds of the small seaside town. But it wasn't the Sash Mill where I learned about movies. and which I miss to this day as I exercise and watch my Netflix discs, for which I am grateful -but they aren't the same.