We are closing in on the end of my daily publication of this blog after four and a half years and while Chuck and I work to put the finishing touches on our new shared website http://TheKeyWestLocal.com I am reprinting old essays as a way of reminding us where we have been and what perhaps i will enjoy photographing again in the once a day format of the new site. This blog has been great fun, and with the five essays a day format I have boosted the readership enough to allow me to think of better ways to present Key West online. Content will always be foremost because I want to see fresh material every day twice a day and sharing that task with Chuck will be a delight i am sure. I look back in some amazement at my output over the years. All by myself... 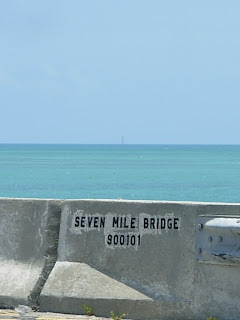 When the original seven mile bridge was under construction at the beginning of the 20th century it was viewed by many as an engineering feat on the same order of amazement as the "Eighth Wonder of the World" which at that time was the construction of the Panama Canal, less beautiful perhaps than the Hanging Gardens of Babylon but decidedly more useful in the Industrial Age. The original bridge seen here from the new bridge, shows off the cement columns built around 1910 and still as solid as ever. 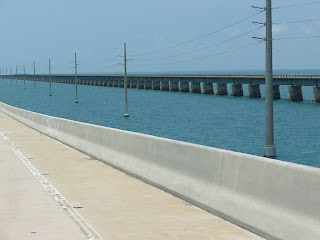 The original was built for the railway of course and posed a head scratcher to the engineers standing on Knight's Key in Marathon wondering how they were going to get the rails over the gap. They did it the Panama Canal way, building waterproof holes in the water with wooden casements and filling them with cement, giving them that characteristic rounded look: 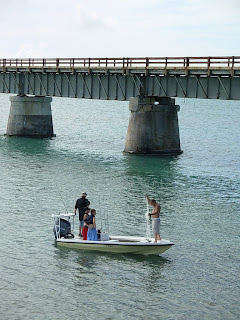 The new bridge was built in 1982 and opened to traffic much to the relief of the claustrophobic drivers of the Lower Keys. The new bridge is little more than a normal two lane highway when you drive on it: 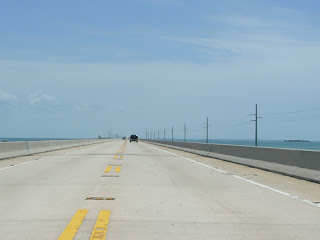 Of course its a bit wet on either side and the scenery is quite spectacular: 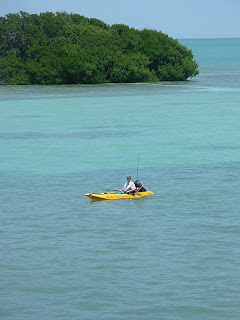 The old bridge was quite narrow as can be seen today as it is still open at each end for pedestrians for use as a fishing bridge. This is the section of old bridge at the southern/western end, towards Big Pine Key and it's has been gussied up with cement barriers and trash cans: 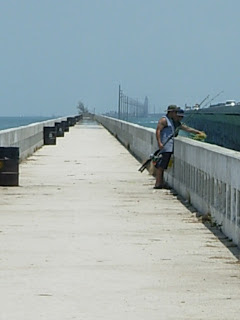 The northern/eastern end of the old bridge, the Marathon end, is still in use as a roadway for the trolley to Pigeon Key. That's an excursion I wrote about elsewhere and i snagged a couple of pictures for this essay.

Imagine driving this road and meeting a truck three miles out. I was told (though I don't remember when I rode the bridge in 1981) that when two trucks met they occasionally had to stop and squirm past each other, folding their mirrors and backing and forthing to get by. Some people really did get freaked out driving this narrow bridge for seven long miles (nowadays it has barriers in the roadway to separate the trolley from pedestrians and cyclists coming from the Marathon end): 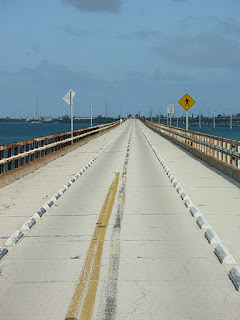 When the railroad was converted to a highway by the state of Florida in 1938 (thanks Works Progress Administration!) the state laid metal sheets across the rail bed, asphalted it and welded the rails as barriers, which are still there. Pigeon Key was a half way spot where rail workers were originally housed and is now a private park open to the public: 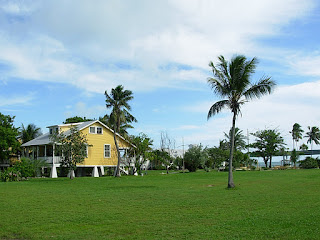 The new bridge has a 70-foot hump three miles out from Marathon, which allows tall boats to go from the Gulf of Mexico to the Straits of Florida through Moser Channel.

And the hump gives a nice view towards Marathon to the east/north (the road actually goes east but its labelled as "northbound"): Or west and south towards Big Pine Key, more or less: 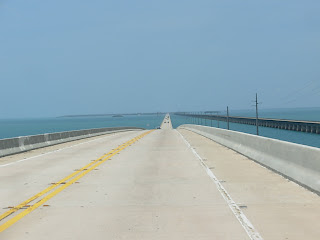 The top of the bridge is marked on the south side by the blue apparatus of the Florida Keys Acqueduct Authority ( the main water pipe to Key West runs alongside Highway One): 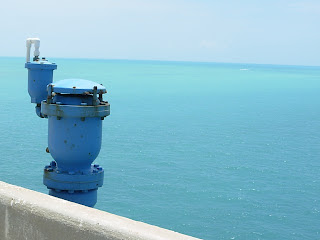 In the distance you can see the incredible shades of colors created by the shallows surrounding Moser Channel as it spills out into the Straits of Florida.

On the other side of the bridge, the north parapet, is a marker I doubt one in a hundred motorists notices (and why would they?): 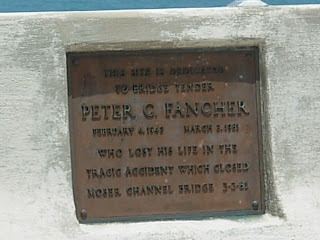 On March 2nd 1981 an aqueduct truck carrying a backhoe accidentally hit and detonated the propane bottle that supplied the bridge tender's quarters on the old lift bridge on the old span: 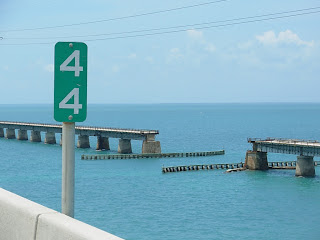 The 39 year old bridge tender died in the explosion and the Lower keys reverted to their island status for a period of several weeks. An old timer I talked to about the incident said it was a difficult time in Key West when everything had to be emergency airlifted or barged into the city. They fixed the bridge to take cars once again but the lifting portion never returned, as the new bridge was opened the next year to much fanfare. 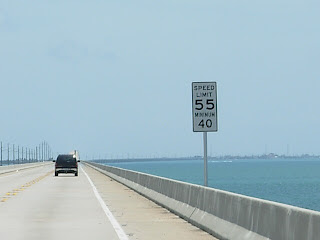 The speed limit is clearly marked though many people, visitors obviously, slow down to take in the views. Its perfectly legal to pass as long as you don't pass where the double yellow lines are solid. I have seen Highway Patrol cars pull a U-turn on the bridge to chase down and stop particularly egregious speeders. And speaking of views, they are quite spectacular, and I try not to get jaded or judgemental when out of state tags are crawling along at 40 miles per hour (The legal minimum for the bridge): 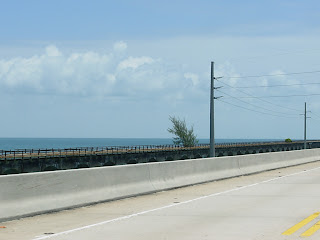 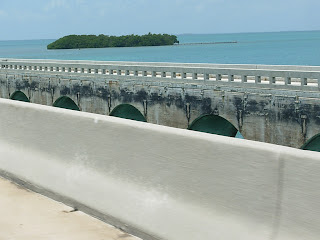 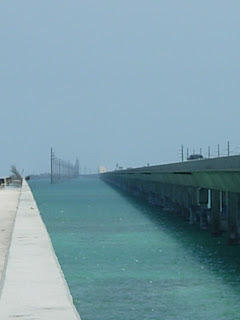 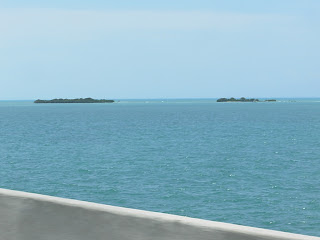 That last picture shows two small islands off the southern end of the bridge, lying on the south side. They are called spoil islands because they were created by Flagler's engineers who heaped up the "spoil" as the dredgings were called. In fact all along the highway you will find deep water up close to the roadway where channels were cut so the dirt could be used to buttress the causeway.

I've gone out to the Money Keys and they aren't much: 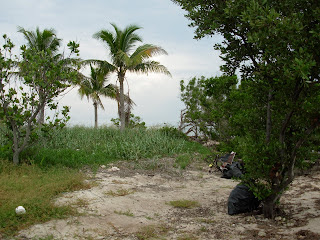 Perhaps it was a lack of mosquito repellent, or the hazy nature of the day, but I found the island to be rather gloomy and unappealing. Though the view of the bridges was rather nice: 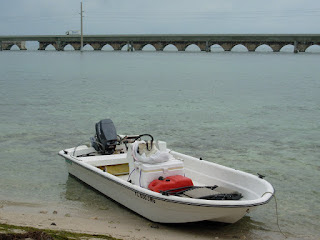 It's actually much easier and faster to get to the Seven Mile Bridge from my house by Triumph Bonneville than by bouncing 14-foot center console. The islands were the spoil material dug out of the ground by Flagler's workers when they built the foundations for the cement pillars of the original bridge. 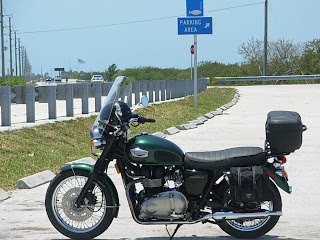 In fact I had been considering an essay on the bridge for some time, but to do it the way I wanted to wasn't possible during the winter (I tried a couple of times), but traffic was always just too heavy. This time of year there are fewer cars on the Highway so what I did was I waited at the southern end of the bridge for cars to go by and when I saw no vehicles approaching I chased the back of the line onto the bridge (the black SUV in the pictures above), so that by the time I got to the hump I could stop and take the pictures while stationary. I don't recommend stopping as vehicles barrel down on you surprisingly fast and you have NOWHERE to go. Caveat photographer.