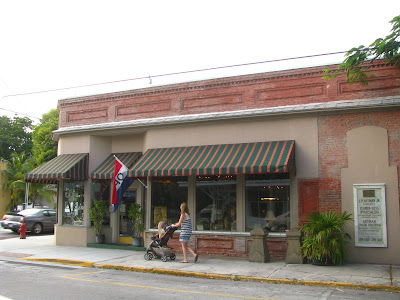 I like the middle of Old Town for dog walks and frequently find myself when perambulating Cheyenne gravitating toward the area of Fleming-Southard-Elizabeth and sometimes Simonton Street. The corner of Fleming and Simonton has four businesses that represent some of the most eclectic architecture in downtown Key West- including brick! 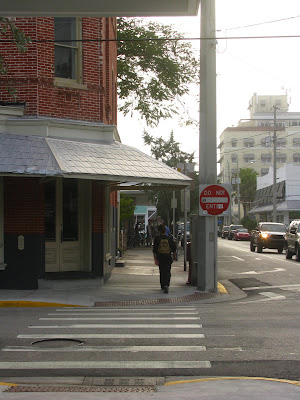 Brick has been a secondary construction material in Key West's history I suspect owing to expense. Bricks are heavy and made good ballast in sailing ships but must have been costly cargo. Most homes are made of timber, and we are told much of that came from wrecks. Below we see China Garden West, one of three restaurants in the chain (one at Sears and one in Big Pine), also a landmark here: 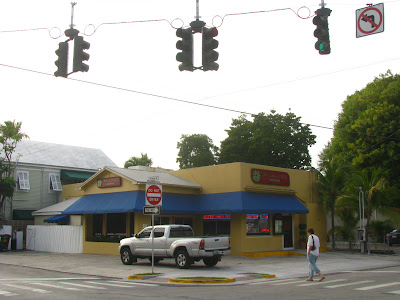 The fourth corner is the Cafe Marquesa, classic wood construction and pretty enough but on this occasion I wanted to walk north on Simonton and see what has changed. This strange overhang inspires me to take a picture every time I pass. 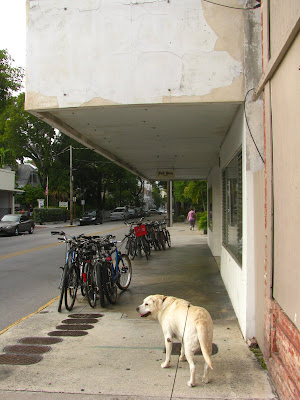 Cheyenne is fond of poking her nose in as we stroll past businesses. her reception here was chilly- we pressed on. 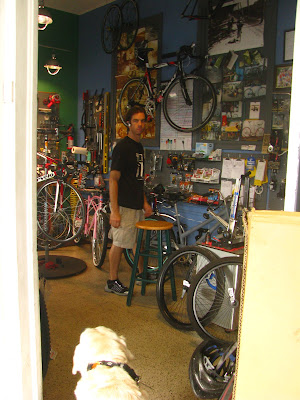 There are lots of bike shops in town (I go to the one on Big Pine nearer to my home plus he likes dogs). Across the street the Dean Lopez funeral home was quiet. I always thought being an undertaker would be a cool job, but I don't have the gravitas and reserved good manners that are essential to the job. No one wants an undertaker with an ironic sense of the ridiculous at a funeral, or worse, at a viewing. 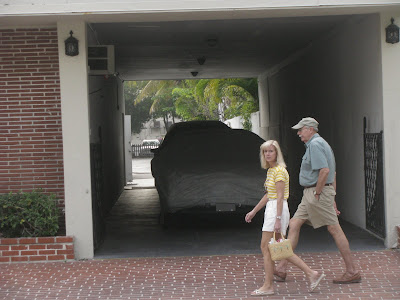 Parts of Simonton near Eaton Street are covered by huge trees that cast dark shadows across the street. It's almost like a forest in there. 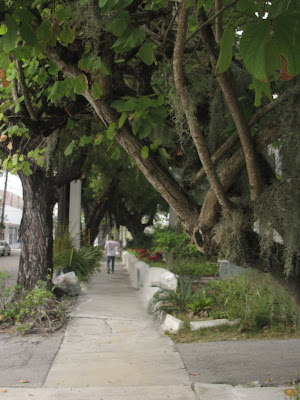 John Simonton bought Key West from Juan Salas who got the rocky little lump from the Spanish crown. Simonton took his $2000 investment and in 1819 divided the island up into four parts, one for himself, one for John Fleeming (later called Fleming), one for John Whitehead and one final portion for Pardon Greene. There was another claimant to the land one John Geddes of Charleston who bought the island a second time from Salas, but that claim was denied by the US Admiralty and so the fifth man by the name of John involved in this saga of purchase and re-purchase of this small chunk of rock exited the scene. 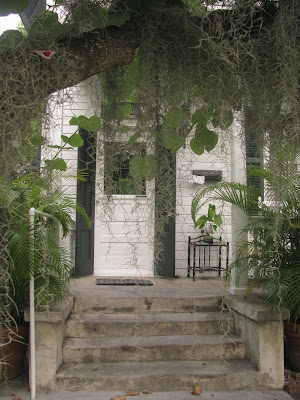 Walking these streets one has to wonder what it was really like living in Key West back in the 1830's. My guess is it was probably a lot less unusual than it is today. Back then everyone lived a life of not much travel, they stayed close to home much more than we do, and the constraints of island living probably were not as restrictive as they sometimes appear today. 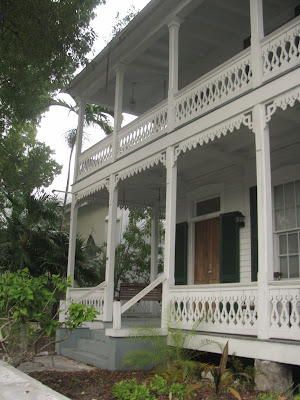 The climate has always been mild and the heat of summer must have slowed the pace of life down not a little. On the other hand Key West was a major stopping point on the sea lanes between the Gulf Coast (Appalachicola, New Orleans, Mobile and Galveston in particular) and necessities and luxuries flowed through the town for those that could buy them. This street-side trash can filled with garden "waste" is a reminder of how fecund Key West is. 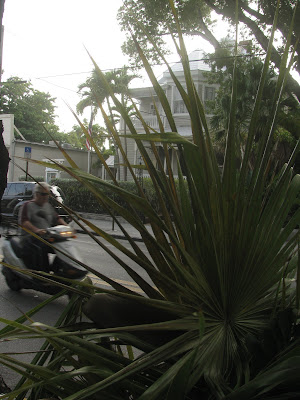 They say Key West has more churches per capita than any other town in North America and who I am to argue with that. Catholicism has been a loud voice in the island affairs over the centuries, naturally, considering the Spanish influence. Key West also boasts Florida's oldest Jewish congregation which brings my wife some pride. However if she were observant she would not be allowed to attend as she married me, a man who looks like a Jew (and wishes he were a Jew) but is in point of fact-not. There's always a catch. The Judaism my wife has taught me has some quite entrancing aspects especially compared to the dour tenets of my youthful Catholicism, but I am too indolent and unmotivated to convert. So I limit myself to enjoying the architecture of these great buildings. The interior of this Methodist Church is equally lovely. Unfortunately the last time I was inside it was for a funeral. 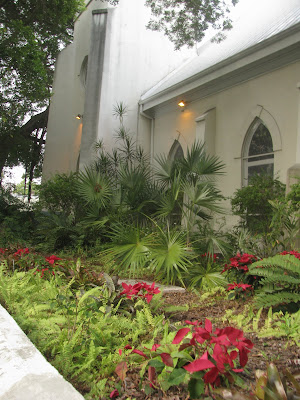 Eaton Street is just around the corner in the picture below. The street is named, weirdly enough for yet another John, and this one was a politicians from Tennessee. He got the street named for him thanks to the fact that he became Secretary of the Navy about the time (1830-ish) they were casting around for a name for the street. Key West was a busy harbor after all and a Secretary of the Navy was no small thing. 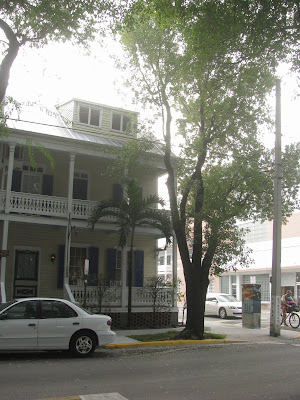 The art deco pink and white building houses the Scottish Rite of the Freemasons, and as I am about as enthusiastic about hopping around on one foot while wearing an apron, as I am about getting on my knees in church, I couldn't possibly say what goes on in there. The good news is that this is also home to Voltaire Books a delightful, clean well lighted place for books. If you can stand to be treated cheerfully by intelligent employees you will do a lot better here than the gruesome dour troglodyte who operates Island Books, the other independent book store. . 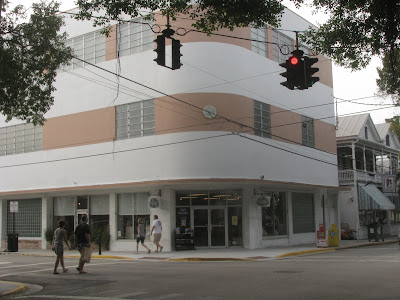 I have no children and thus am frequently baffled by the demands of child rearing. I actually didn't notice the little tyke on the bike until after I had photographed the eclectic assemblage. However one has to wonder why a helmet is good for the kid and superfluous for it's bread winner. 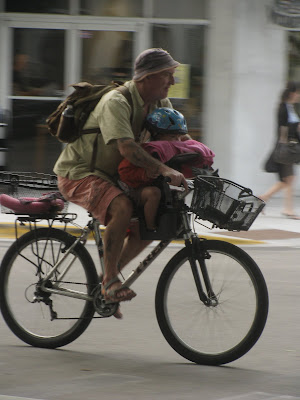 We passed Eaton Street and kept stumping along. The artist that operated this place, The Sign Of Sandford died a while back. I was surprised it appeared to be in full operation. 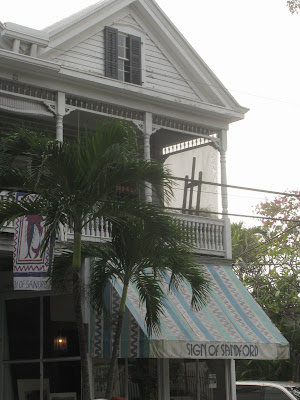 I wonder what it was like to live here a hundred and fifty years ago. No air conditioning but no stereos either. 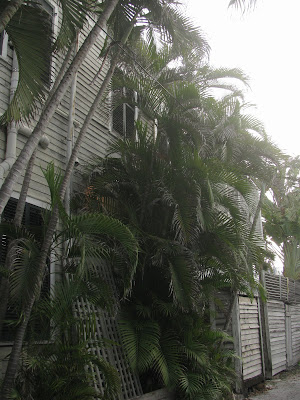 Cheyenne led me down the alley to Monroe Glass and Mirror, a cool little yard mostly out of sight, except for a rather large sign at the entrance. Further in I found this entrancing sign. 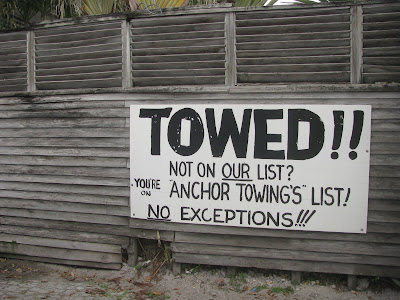 Private property tows are the subject of some debate at the moment in the city. For instance if you park in somebody's privately owned lot, be it a business or something like an apartment complex parking lot you are subject to being towed for illegal parking. The tow companies hold these contracts and patrol them all night long. When they find a violator they call the police, we check the vehicle to make sure it's not stolen and off it goes. The fees for the tow vary and are immensely costly, usually I think between one and two hundred dollars though I have nothing to do with that end of the operation. 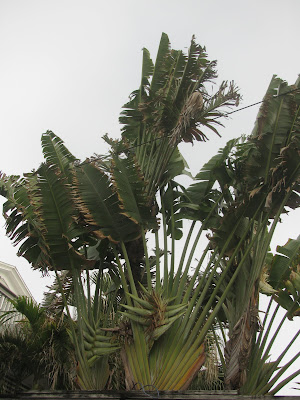 The city commission is thinking about changing some of the rules and requiring someone from the business to call the tows in, rather than having the trucks just float by and pick off the parked cars. The fees have come under scrutiny not least because they vary widely and no one seems to know exactly what they are. There are all sorts of storage charges and added fees it is all terribly confusing. 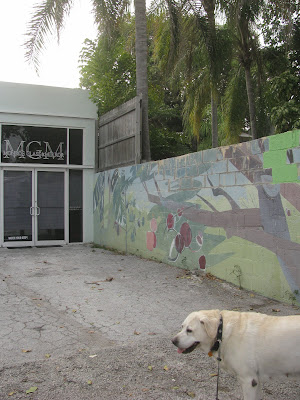 I stood there in the yard admiring this simple yet lovely mural thinking how lucky I am to be able to wander around snow free and with time enough to enjoy the company of my dog. 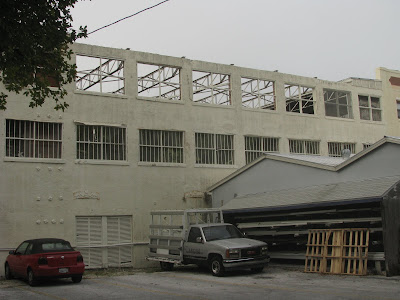 This is the rear of Casa Antigua, the pile opposite the Federal Building on Simonton. It's claim to fame is that Ernest Hemingway lived here for a while before he got his own home in town. I rather like the self contained nature of the house and interior garden. Rather like one of those Islamic gardens of Granda of yore.
Posted by Conchscooter at 12:01 AM 7 comments: Links to this post