I was not expecting much under a clear blue sky because usually it takes  some clouds to produce  some drama. And yet it  was a perfect morning standing on the road waiting for the sun to come up. Rusty was off running and chasing his tail. We were both happy. 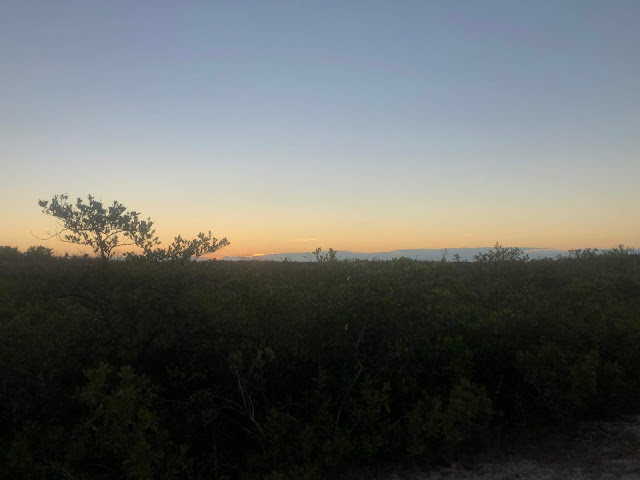 It was cold too a few degrees below 70 with a light breeze, such that when I left the apartment complex in the dark I had turned the car heater on to  clear the chill and discovered to my surprise it worked perfectly and offered not the least hint of cat fur singeing which is what usually happens when you don't use a heater for a long while. It's normal in the Keys where heat is rarely needed for dust to settle on heater coils so when you turn them on they burn the dust and make a gruesome smell. 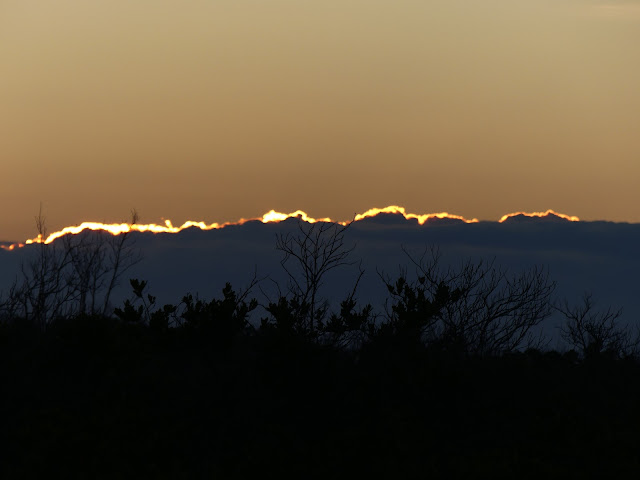 I wasn't alone in my travels when I looked up and heard the swishing sound of pelicans traveling overhead. 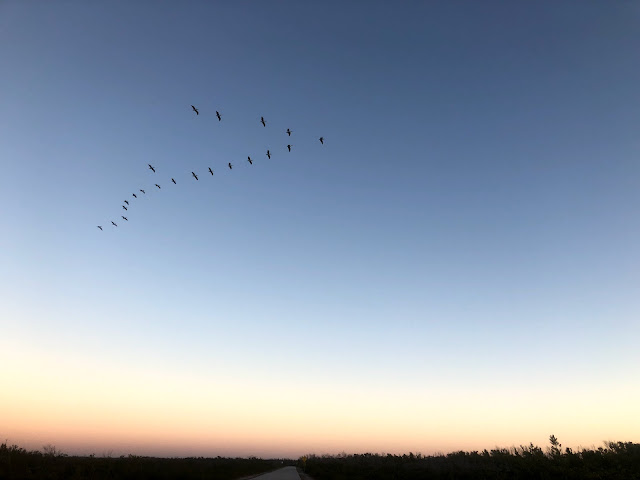 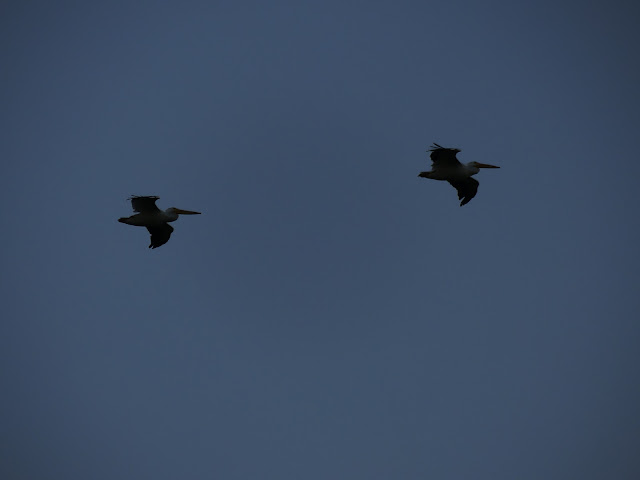 Finally the sun put in an appearance and started to do me the courtesy of warming me up. 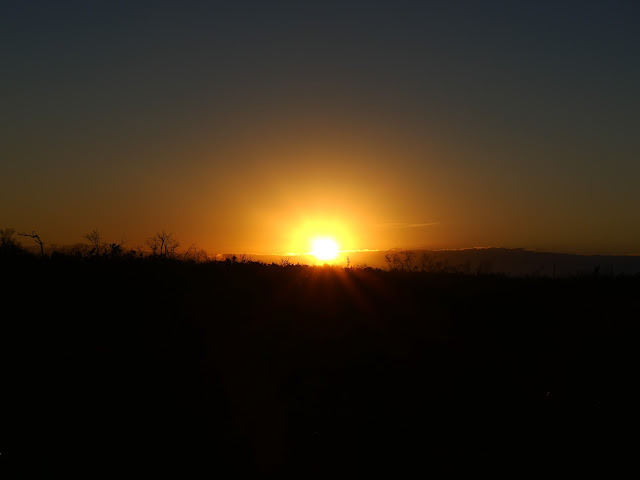 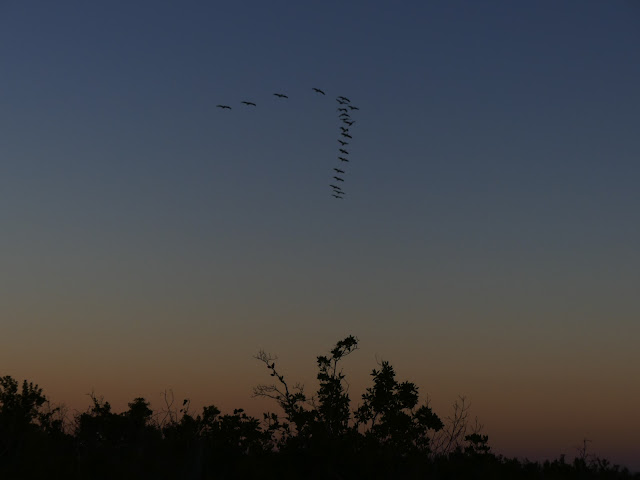 The morning glow was reflected on some of the mangrove leaves along the roadway. I was feeling at peace and happy to be there. I have discovered since I left rehab that my life changing experience has not changed the people around me and with that realization came the understanding that I can't make changes beyond my very narrow sphere of influence. 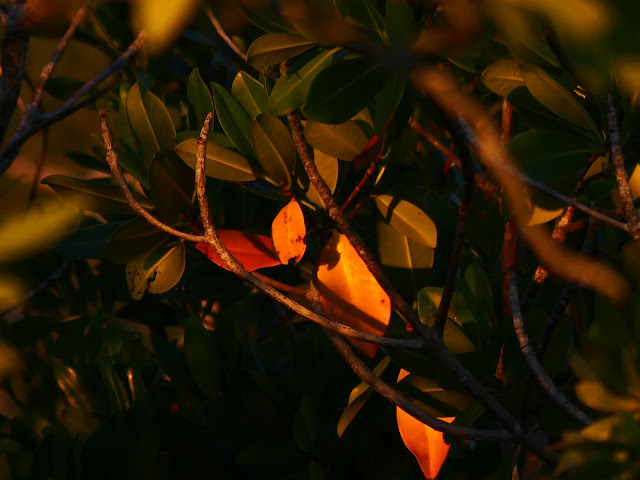 I had a conversation to that effect with a detective at work. Detectives are odd people in that they move through the world looking like civilians but they deal close up with the worst of human behavior. And unlike uniformed officers they also deal with the impact of that behavior, talking to family members, consoling and pulling their investigation through the most intimate details of people's lives. Consequently when I talked to a detective I met on my way to my office she actually understood me when I said I had seen some positive aspects to my recent hospitalization. 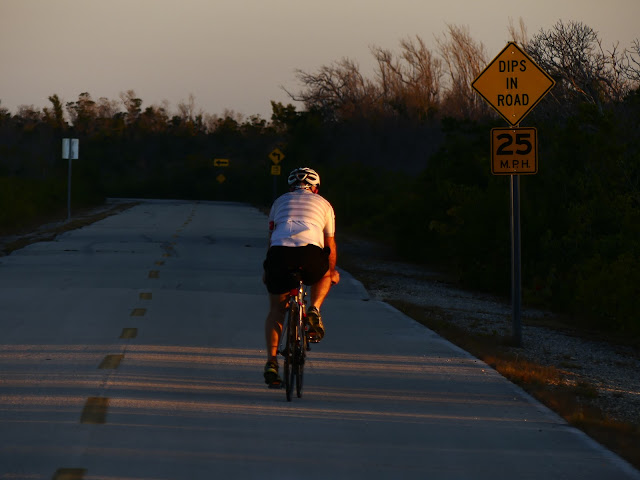 The mental clarity I gained came at a high price but unlike other people who write me off as crazy when I say the experience wasn't all bad the detective understood my point. I know now I where I want to live and how I want to live as hard as that may be to achieve every day. I know my time is limited and I am reminded every day of what I want to discard from my life and what I want to retain. Even in my own negative experiences when I am feeling annoyed I can see past the momentary in ways I couldn't before the accident. I can measure the extent and nature of my irritation before I allow myself to be overwhelmed. I wonder how I will cope when I have another big test to face, a problem of greater magnitude than a mere irritation but I hope I shall have the inner strength to cope.Right now if you tell me I have a messed up work schedule or my glasses are broken I shrug and move on. Not worth getting upset about. I used to let things like that bother me. 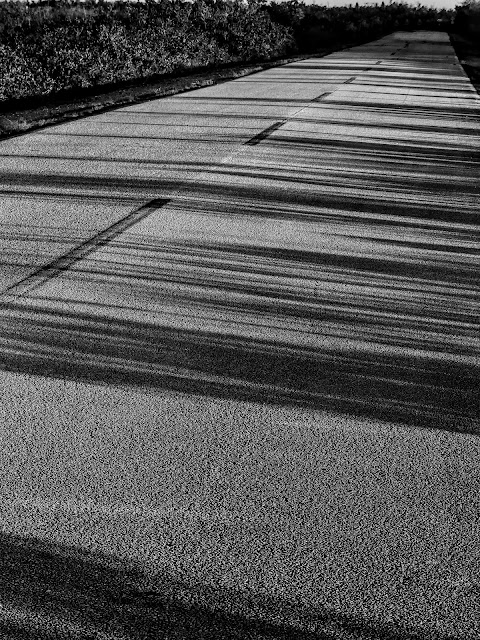 The difficulty comes in relations with others. Other people haven't had their clocks re-set for them like I have. I fear I come across as insincere sometimes because I now have a tendency to make light of everything and I have to guard against that. What seems inconsequential to me is a matter of grave disturbance to my neighbor. I watched a young motorcyclist forced to swerve to avoid a car that moved into his lane, obviously not noticing the motorcycle. It was a mistake not a deliberate act of cruelty and perhaps the  driver should have seen him but the rider twisted in his saddle shaking his fist at the car driver for several city blocks until the car turned off. Then the motorcyclist finally turned back to his own direction of travel and promptly deliberately ran a red light. I laughed glad at least he didn't get knocked down. I don't think he would have thanked me had I reached him later and pointed out the irony of his dangerous behavior. I know a man I'd like to befriend. I think he has lived an interesting life and now he has settled in Key West I see him around town from time to time. His girlfriend is garrulous and assertive and difficult to take in large doses, but like so many successful relationships the combination of personalities seems to work well. I think I grate on her nerves and so I cannot make a new friend as it seems I have to go through her to him. Too bad. I of course have made a promise to myself not to be around people who grate on my nerves! And her boyfriend is  part of a package deal. My wife has no interest at all in dealing with her. So I slowly learn to tread lightly and think before I speak and not to take stuff personally. Every day is a test. 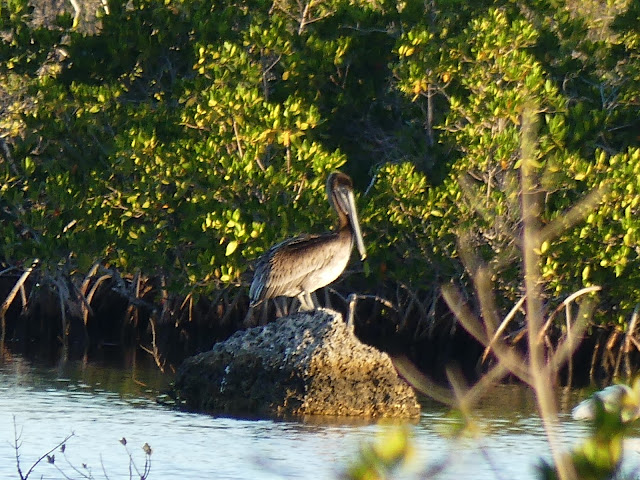 Those thoughts went through my mind while I was reveling in the solitude of my slow walk, pushing the walker up the road, my big camera around my neck and not a human in sight. I felt rather as though I should not permit myself such pleasure in my solitude, as though enjoying so much being alone was a betrayal of my attempts to be more social and more open as I reinsert myself into the world. 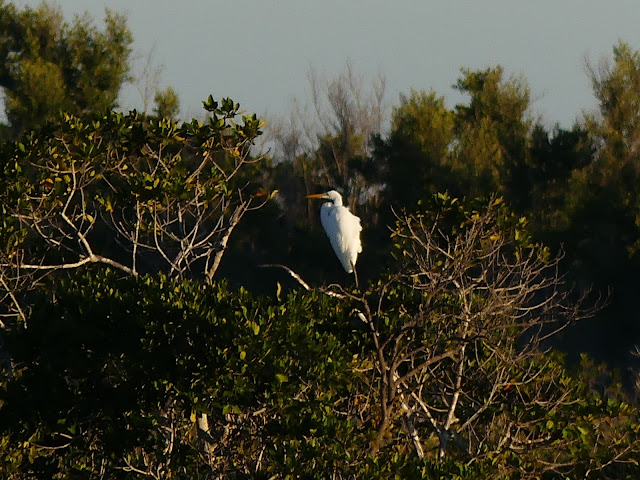 I found myself surrounded by Nature and it felt good. I had to answer to no one and please no one, not even my dog who was off enjoying his own space. In the distance I could hear the flat roar from over the water of  un-silenced commercial fishing boats, but closer to me there was nothing. 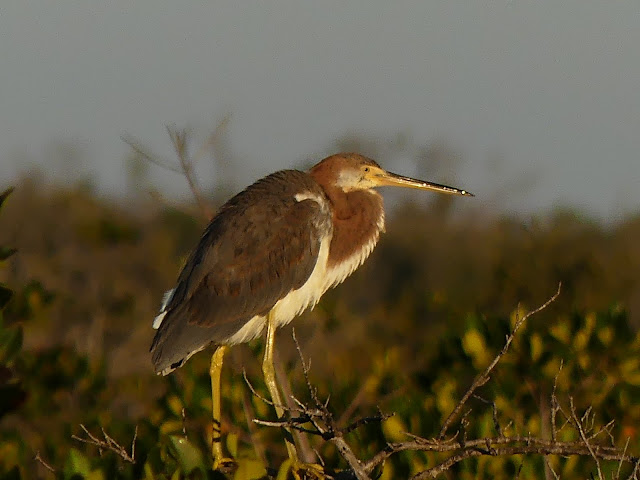 I snatched pictures out of the sky, discarding the worst and hoping the remainder would express my solitary idle pleasure. You can't make people bend to your view of the world and telling strangers to make the most of every minute is a terrible insult when you don't know what path they are walking in the first place.

As I write this my friend Webb, the inveterate circumnavigator is poised to take off on a sailing journey to try to complete his sixth, and possibly last trip around the globe.  He describes going sailing as entering the monastery of the sea, a place where he has no communication with people sometimes for weeks at a time. It's where he is most comfortable and he makes no bones about it. He enjoys land, he has been married several times and is married now, but he lives to sail and to explore the boundaries of human experience. Part of my own rehab is finding, at this late stage in my life the boundaries between my solitary restored self and the part of me that I want to push like a reluctant barge into the flow of human companionship and conversation. 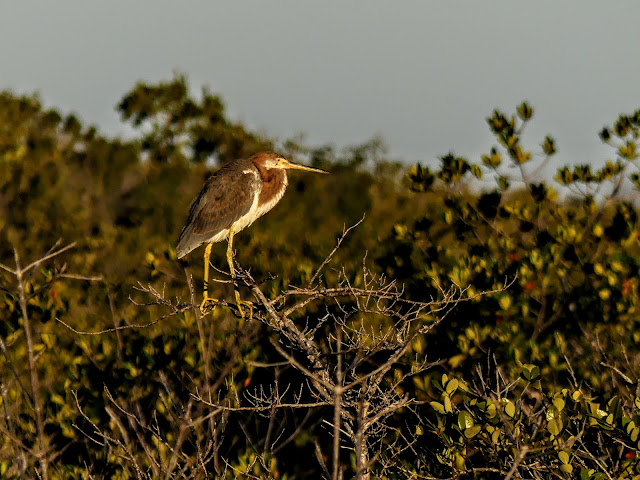 These seem heavy thoughts when written down but in giving up hope of making a new friend I felt like I had taken another step along the path, finding my way one rejection at a time. That's right I tell myself, removing clutter from your life is a fad right now on Netflix but I'm pretty good at getting rid of stuff. The intangibles are harder to sort out, measuring an appropriate amount of solitude, whether or not to agree to a social event is much more complicated for me.Perhaps the first thing I should do is stop navel gazing and just get on with it, whatever it is. 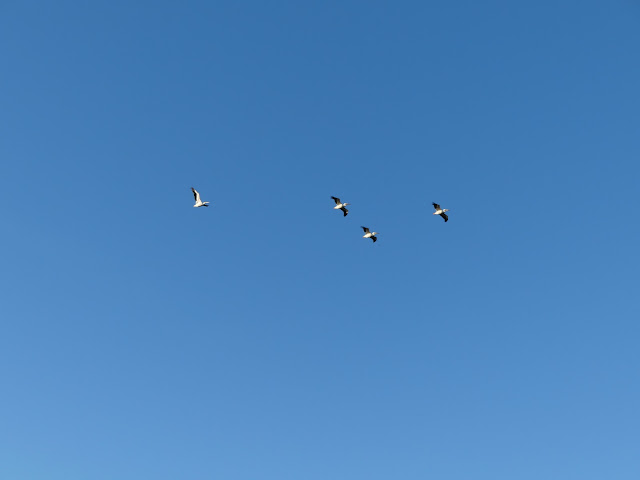 It was a good day out in the boonies. One short whistle and my little brown bundle of joy burst out of the puddle and came trotting right alongside me. I have learned to trust my own judgement at least a little when it comes to figuring out people but the easy way is to see what Rusty thinks of people we come across. He is never wrong and if he avoids you, I will too. 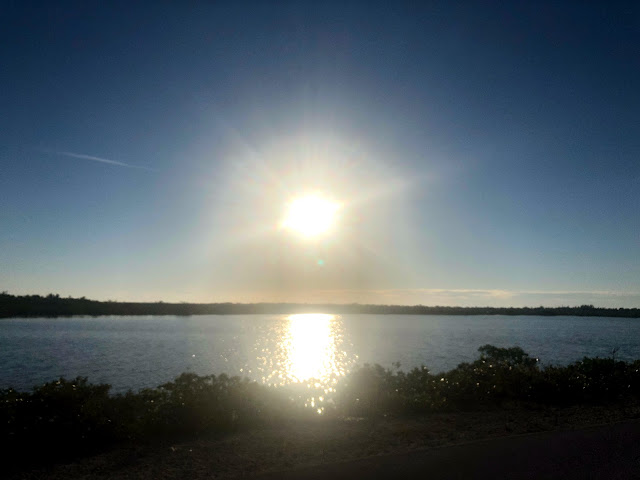 That's what I should do, use Rusty as  people barometer, clumsy but accurate!
Posted by Conchscooter at 12:00 AM 6 comments: