I am working hard to learn to work during daylight hours. A 911 Dispatch center operates 24 hours of course so for every shift of three dispatchers working during the day there are three of us working nights. For the past five or six years I've worked the six pm to six am shift. Now at the behest of the Captain I'm doing the reverse, and I'm here to tell you it ain't easy. When the Police Department parking lot looks like this my circadian clock tells me I should be abed. 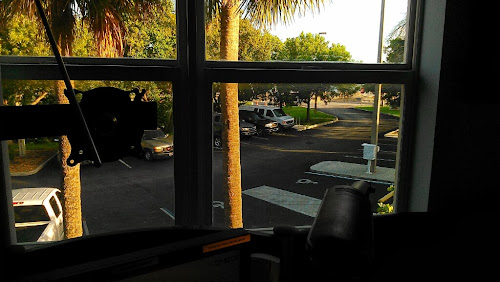 I have to admit I am a bit rusty on daytime procedures which differ quite a bit from night shift where administrative calls are few and drunks fights and car crashes dominate the nightly call volume. Frankly I enjoy trying to unravel the nighttime alcohol fueled lunacy over transferring calls to the vital daytime administrative functions of a unit of city administration, which is one of the functions of a municipal police department. But when the Captain wants us to stretch ourselves and improve our cross-shift efficiency, the only effective answer is to do as you are told and smile while doing it. 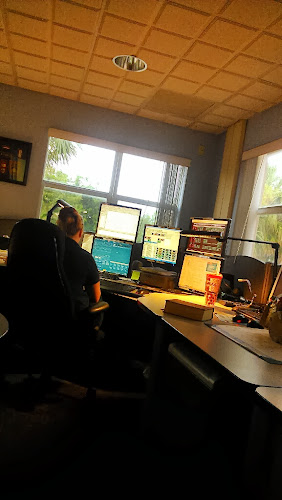 In point of fact I am learning to enjoy the...learning process! And there are some discreet advantages to working day shift. I'm sleeping a deeper sleep, partly because I come home exhausted, and have to walk Cheyenne who deeply resents my day time absence and lets me know it until we start our evening walk together. Then I eat dinner and pass out ready to rise to my alarm clock (ugh!) at 4:45 am. I also happen to find myself in town in the middle of the day free to roam for an hour during my lunch break. "Get tickets to the Tropic's special event tonight!" my wife ordered me by text. "Go to the bank and get cash!" was another daytime order. Working day shift leaves me vulnerable to the demands of shared domesticity. 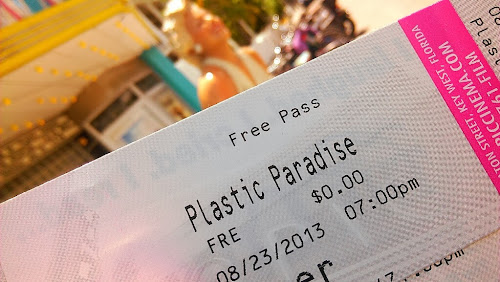 The other fun part of day shift's lunch breaks is being able to wander around and take a few pictures as I go. I get to see Key West for a while and enjoy sharing the city with the week day, day time visitors. 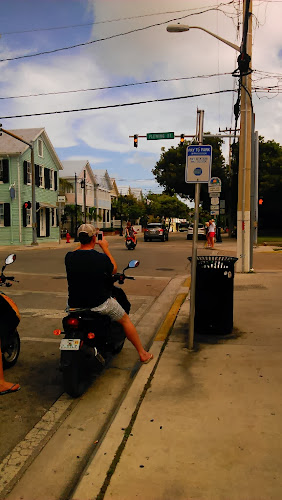 This picture below tells the August story in Key West, a lonely Southernmost Point, in a tourist town where families are back in school and winter escape artists have yet to think about abandoning their northern snow fields. 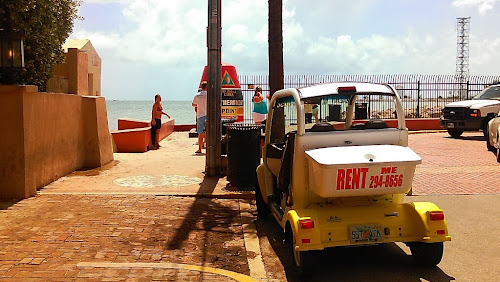 A post office chicken was out walking her two chicks, one half hidden behind her in this picture as she turned to fend me and my phone camera off her precious charges. Summer or no summer she just wanted to be left alone. So I did just that. 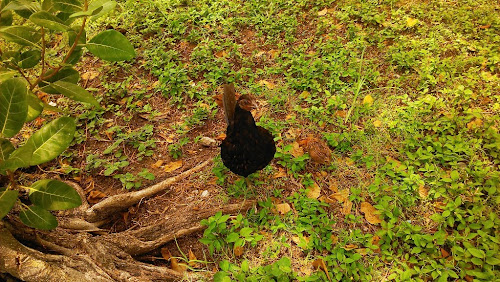 We went, my wife and I to see the world première of an hour long documentary, Plastic Paradise | WLRN coming soon to a PBS station near you, offered for free last Friday night to anyone in Key West ready to show up and celebrate the revival of Tiki "culture" in the US. I am not a Tiki aficionado by any means but it was an interesting movie...
at 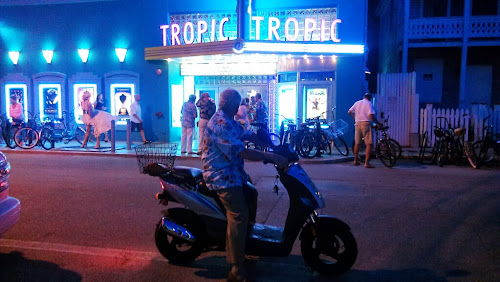 WLRN (91.3 FM and TV channel 17) has been making a push into the Keys for some time now, and recently replaced a rather feeble pair of translators with a "local station" for Key West and Marathon at 91.5 FM, even though WKWM does nothing more than rebroadcast WLRN's NPR and modest local, Miami based, programming. The TV station personnel were glad to "raise their profile" in Key West which they describe as a desirable destination yet not within reach for them except at special events. You'd think they could drive three whole hours to pay this outpost on the dark side if the moon a visit from time to time if they felt like it. You'd be amazed how many South Florida residents have heard of the Keys but never bothered to visit. such lack of curiosity floors me. 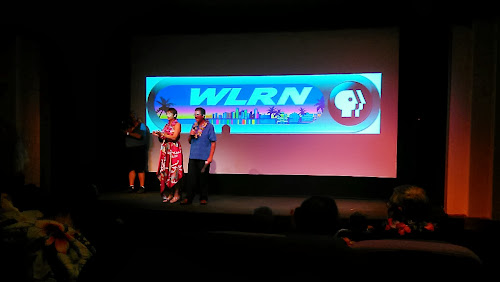 I enjoyed finding out about Polynesian themed restaurants and the people who flee daily drudgery by wearing Hawaiian shirts, eating bland Chinese food (by their own account!) while drinking large complicated rum based drinks out of bizarre shaped glasses. As one person remarked, if they had real Polynesian culture to offer no one would have been interested, except of course for me...nerd that I am. I have never eaten the bland, authentically Polynesian starch called poi and I'd like to before I die. 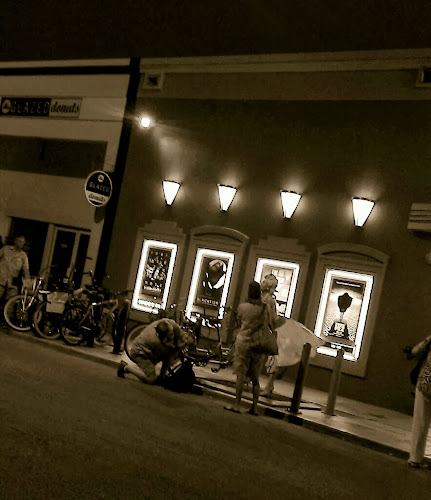 My wife got hung up talking with women in the bathroom so I moseyed out and stared at the sky through my camera lense. I also watched people inspecting Marilyn Monroe's big white bloomers courtesy of Seward Johnson. It was warm and enveloping and I enjoyed the darkness tinged with blue of the just missed sunset. 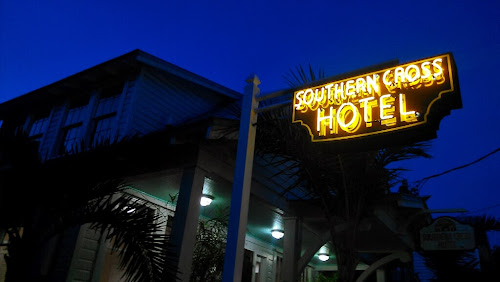 As we walked back to our parking spot nearby we passed this flag, a new symbol of opposition to harbor channel dredging plans, except in this case it was upside down which meant I'm not sure what - distress perhaps? 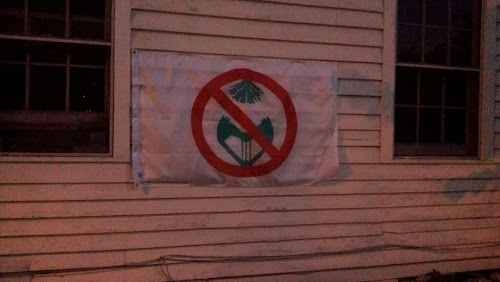 Saturday morning dawned bright and sunny, what else? And I was off duty until my short evening shift Tuesday. It's what I call my short week when I work two days out of the week, opposite my long week when I work six. Cheyenne takes advantage to encourage me to walk her often. Saturday we went to the Bat Tower at Sugarloaf Lodge. Key West Diary: Sugarloaf Bat Tower. Nowadays it sports a growing osprey nest on the roof, as the tower continues its inexorable decay. No one cares apparently. 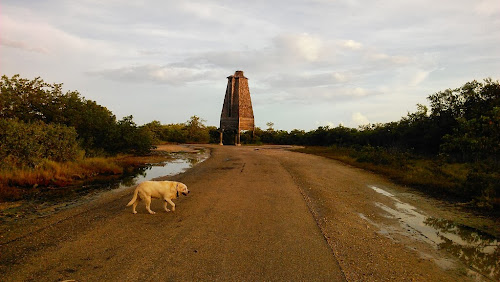 It was the start of a good weekend at home, at dinner with friends, in between going out walking with she who must be obeyed. 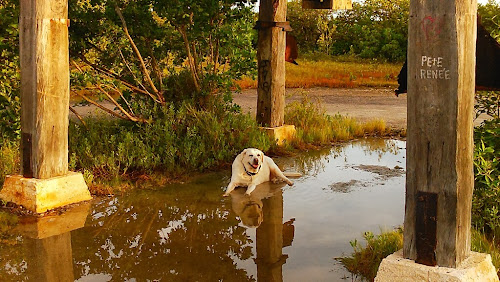 She expects nothing less.