From the archives, in this case September 2009, a report on a  trip I took on my much loved Triumph Bonneville 865, drowned last September by Hurricane Irma.

This is the southernmost road across Florida, Highway 41, also known as Tamiami Trail. 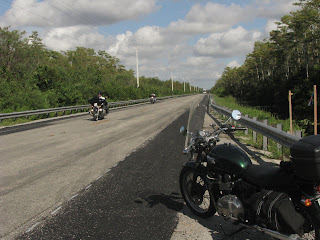 For some people the name inspires romantic visions of some native culture, though actually all it means is Tampa to Miami Trail. Oh well. It remains my favorite way to cross the state and plans to enlarge it have fallen away as the economy imploded. The views are typical of the Everglades either side of the two lane highway: 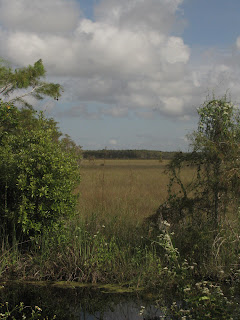 A wealthy land baron on Florida's west coast, by the inspired name of Barron Gift Collier got busy in 1923 building paved roads in southwest Florida, in the area known today as...Collier county. He also decided to connect Tampa to Miami, a job as you can see in this picture from the Pompano Beach Historical society, that had nothing to recommend it: 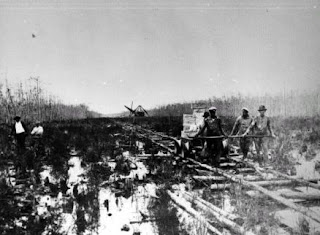 I think of these poor, nameless sods every time I ride the trail and wonder how they coped in the muck of the middle of Florida. It must have been ghastly even for our ancestors who were, we are told, much tougher than us. It's about 60 miles from the Krome Avenue intersection to Carnestown (a solitary gas station) at the intersection of Highway 29 which heads north towards Lake Okeechobee. And it all looks pretty much like this, wet prairie and clumps of cypress trees: 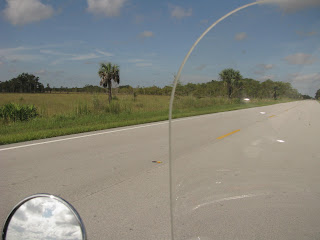 It isn't what Hollywood depicts the Everglades to be: a foggy, Spanish moss infested jungle with huge ferns and crazy old hermits living in huts and eating human flesh. The Everglades is a swamp filled with sunshine and heat and teeming with life. And yes there are alligators though I did not get to see one this trip. I will return to Loop Road to take some pictures of them, I'm sure this winter. Meanwhile I took off north on Highway 29 for twenty miles to the intersection of the other east-west road crossing through the Everglades: 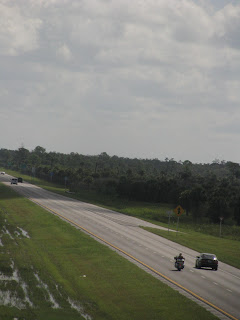 There is an intersection here which will get you onto Alligator Alley for free, avoiding the $2.50 toll that is charged upon entry at each end of the cross-Everglades section of the highway. Alligator Alley is part of I-75 from Fort Lauderdale to Naples. 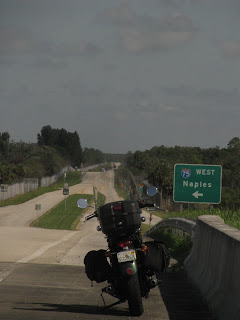 Beyond the Bonneville lies Florida Highway 29 that runs another 20 miles north to Immokalee (pro: im-mock-a-lee with the emphasis on mock), a lilting name for a not particularly scenic town that makes it's living from agriculture and tomatoes in particular. 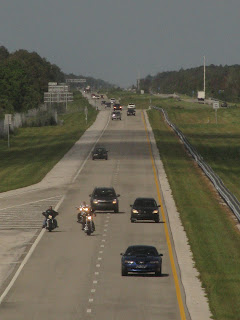 Some people prefer Alligator Alley to Tamiami Trail because it feels less closed in and the views are somewhat more expansive. Still, hill country this is not.


I had decided on this trip that as far as I was able I would ride the back roads and a glance at Google maps for south Florida shows a spider web of very straight lines across miles and miles of open countryside. 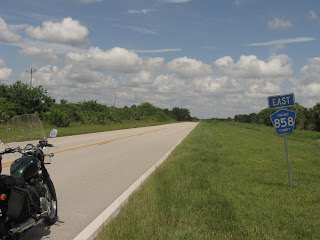 I was relieved to get off Highway 29 as I found it to be littered with law enforcement including a rather sneaky Dodge SUV parked on the shoulder with radar. 60 miles an hour suddenly seemed a very reasonable speed on the dead straight road. I ducked off onto these agricultural roads as soon as I decently could. 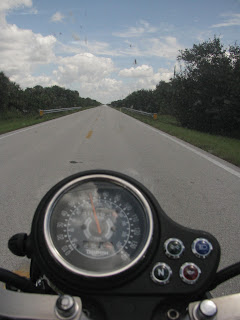 I have long harbored a fantasy that one day God would dump a huge pile of granite in South Florida, just south of Lake Okeechobee, and humans would build three roads up it and down it. Two narrow winding ones for motorcycles and one wide one through the pine forests for cars filled with car-sick prone families. And then, when I got the urge to leave the Keys for a day I could ride up and down twisting mountains roads to my heart's content. Instead the heat of a burning hot 100 degree (38C) September day produces mirages on the highway which appears to submerge beneath flooding Everglades waters: 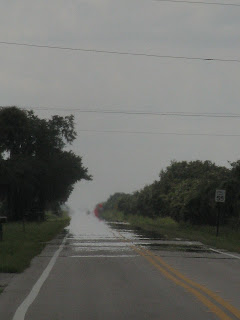 I wondered what, if anything, might be left of the Devil's Garden and as far as I can tell it's a creek of some sort. 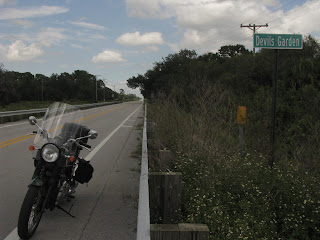 Apparently the Devil's Garden was a slough in the Everglades with lots of hammocks (dry areas of land) of cypress trees that was complicated to navigate and thus seemed devilish to the early explorers. Now it looks like this: 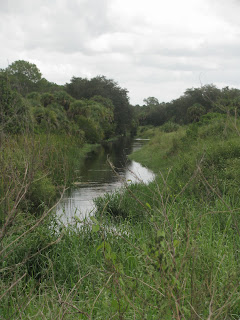 And it is to be found at this junction. Which is where two dead straight roads join: 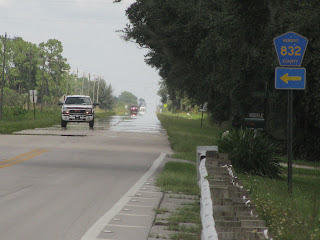 I find these views amazing, perhaps because I have spent too much of my life admiring mountain ranges and open ocean. 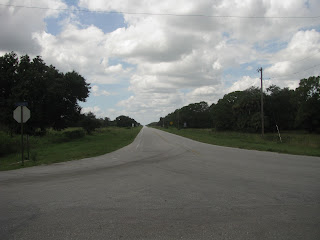 This is not a spot where I would like to live even though there are spreading oak trees in the vicinity to break up the monotony of cypress trees and grass: 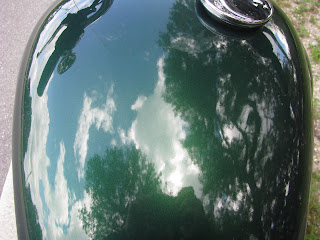 Devil's Garden is not a flourishing center of commerce or industry as far as I could tell: 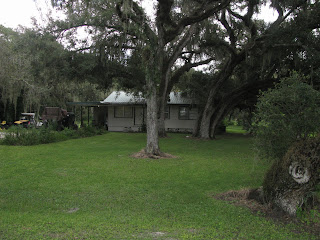 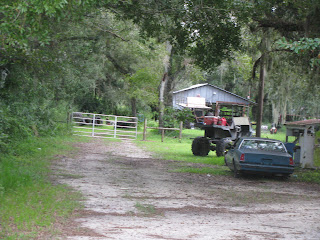 So I kept on riding, heading for my target for the day, the Clewiston Inn on the south shore of Lake Okeechobee, where I found a well air conditioned dining room brimming with (unsweetened) ice tea, filled with ice cubes, which I sucked down like a desert traveler deprived of water, while I checked the day's news in the Key West Citizen, published three hundred miles to the south and none the worse for having traveled here in my saddlebag: 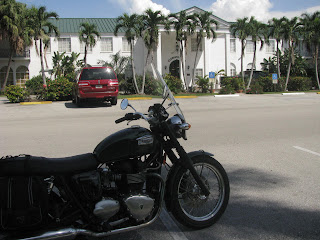 Pot roast, macaroni and cheese and fried okra set me up for the ride home, across more prairies, more wide open spaces, more silence that closed in whenever I stopped and turned off the engine. I also came across this phenomenon which one doesn't see in the Keys: 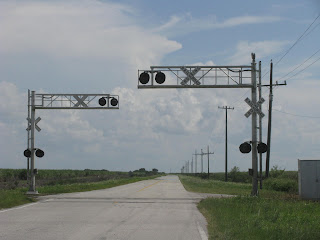 And somehow, while I was riding at speeds more than twice as fast as the posted 45 mph (70km/h) limit I spotted a black lump in the road. I stopped and went back to give him a lift to the safety of the grass at the side. 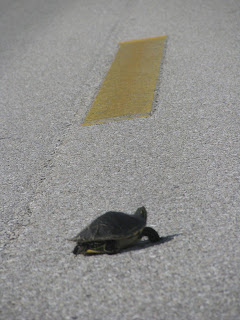 He stretched his neck and his feet in an effort to get away from my invasive hand. He didn't seem to much enjoy his first ever flight, which lasted all of ten seconds and ended when I gently landed him in safety twenty feet away. I got back on the Bonneville as a large truck came by, filling the empty space where the tortoise had been, and I promptly hit a pot hole with my front wheel jarring my tongue and compressing my spine for a moment. 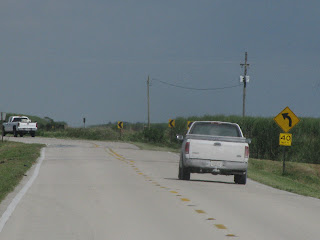 The Everglades are special we are told, but for someone riding a motorcycle one needs to have a particular outlook to enjoy these roads. At least, having read this you can't say I didn't warn you.
Posted by Conchscooter at 12:00 AM No comments: