They say the Key West cemetery has close to 80,000 people buried in it. One is allowed to visit by car or no foot or by bicycle but scooters and motorcycles are banned thanks to the bad behavior of a few. 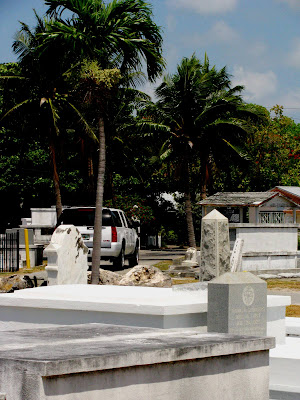 There are the famous grave headstones of the witty and dead but so many of these vaults are simple and reverent memories of actual family members, it's hard to choose which to photograph. this one below reminded me of the Italian style where I grew up with a photo included on the headstone. 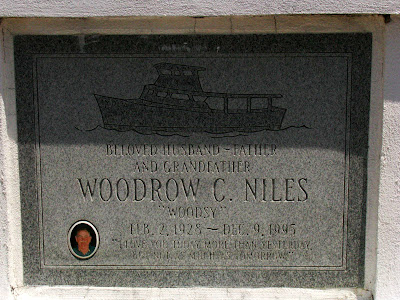 The etching of the boat was quite beautiful,and made a powerful statement. Perhaps i should be planning my headstone but my instructions are clear for my wife: cremation and scattering at sea. From the primal muck and back to it in the end. 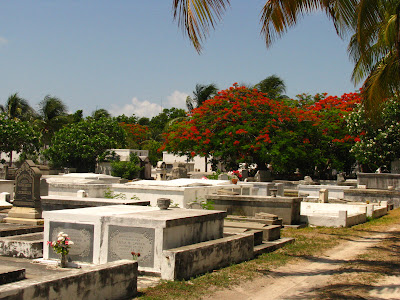 Mind you, when you see this sort of scenery it makes you think that perhaps eternity surrounded by flowers and sunshine might not be so bad. The other great Key West tradition is the roof over the grave which I find charming. 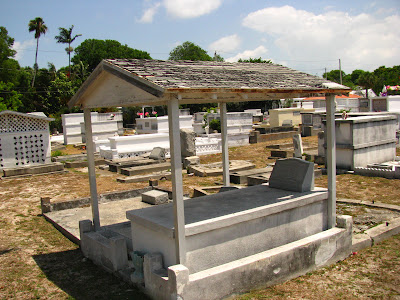 Work is underway to spruce up the cemetery but I find it a fine place to walk and think and enjoy some peace and quiet among the dead. that many people fear cemeteries seems profoundly odd to me. 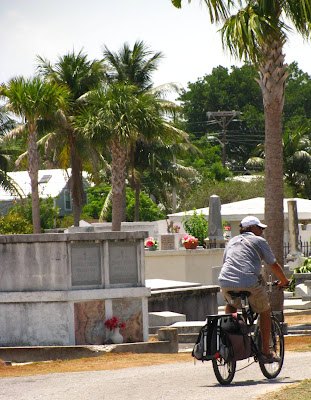 We are lucky we have 19 acres of peace and quiet in the middle of the city available for us to be reminded so eloquently of the city's past.

If in your walks along the shore of a particular Key you come across a small inoffensive dinghy lashed to a rock or a root you might be in the presence of the elusive back country liveaboard. 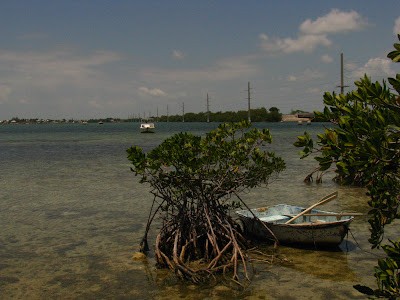 The back country liveaboard is a reclusive mammal, sidling on the fringes of society, though frequently not discernible as that different to the unsuspecting eye. A dog walk on the shore may reveal boats at anchor on the horizon but that doesn't necessarily mean human liveaboards are in the vicinity. 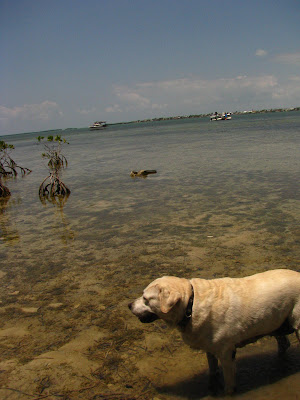 Frequently mistaken for bums or moochers liveaboards are a hardy self reliant species, so much so they usually avoid regimented life ashore and revel in the hardships of life afloat that less sturdy creatures feel they cannot do without. However poverty is frequently one component of life afloat and as such the craft used as homes frequently lack style and amenity. 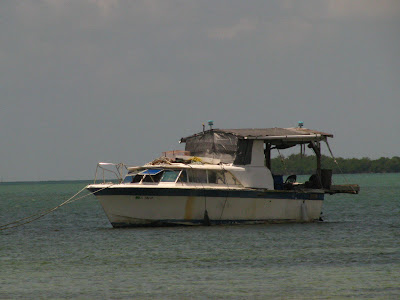 The thing is, the inshore waters of the Florida Keys are not terribly rough as a general rule, the temperatures are mild year round and the occasional hurricane can be ignored until the very last minute. If one's home is wrecked the loss need not be insurmountable as more such craft are to be found all over the place, some would say unfortunately. 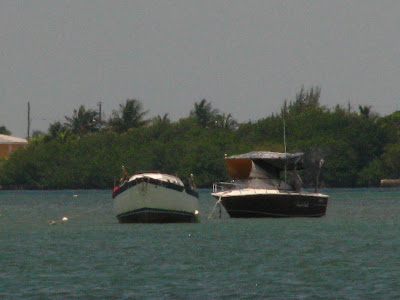 It's important to note that a person who lives on a boat at anchor, on an official mooring or in a marina may very well not be an actual mariner. The act of living afloat does not of itself confer the ability to move the vessel from one place to another, and in fact a vessel used as a home normally becomes a stagnant hole in the water as immobile as a mangrove. 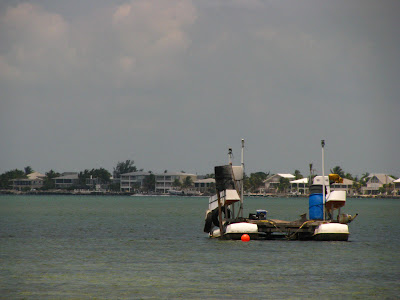 And it is not completely surprising to find that many of these vessel actually lack any form of propulsion, such that if they do need to move they are unable. Admiral Lord Nelson is said to have remarked that "men and ships rot in port," advocating an active life under sail for both. 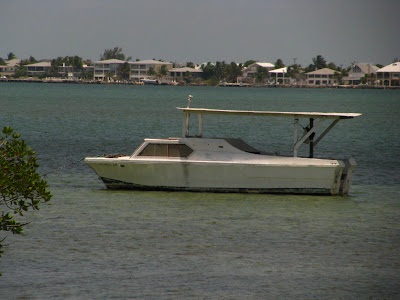 It became a problem too that boats left at anchor in this bay broke loose and sailboats, pushed into the overhead wires at the head of Newfound Harbor had a tendency to short out electrical current between Big Pine and Key West, the mast's tapping plunging the Lower keys into momentary darkness. So much so they have banned sailboats from anchoring in this area. 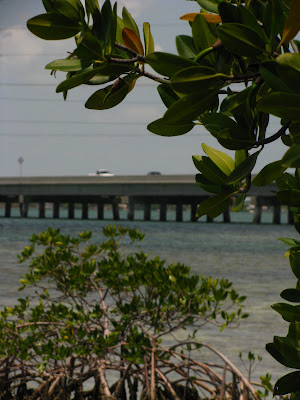 I suppose any one who has not joined the tribe for any length of time might think it romantic to live thus, that view may be tempered the next time a storm blows through with wind and rain and visibility next to nothing and waves smashing the beach and that would be the time one has to row ashore and get in the car or on the bicycle to get to work.

Posted by Conchscooter at 5:01 PM 5 comments:

It is an anomaly in my brain I'm sure but I find Key West signs to be absolutely fascinating. This lurid notice has been posted for a few weeks now at the two entrances to the cemetery and if it's intent isn't clear you aren't paying attention. 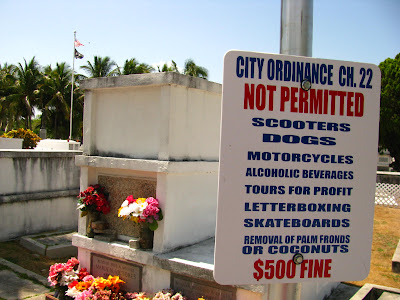 There was a brouhaha recently when the back gate on Frances Street was closed unilaterally by the Sexton who got upset with people being disrespectful in his domain. That action reminded everyone that not everywhere in Key West is for sale or for profit and after some harried negotiations the city prevailed to have the back gate open for pedestrians and cyclists and the through route is open once again. But the signs are there, a thinly veiled reminder that not respecting Key west's dead will bring retribution. I found this principled stand by the Sexton rather refreshing in a world gone mad for commerce. 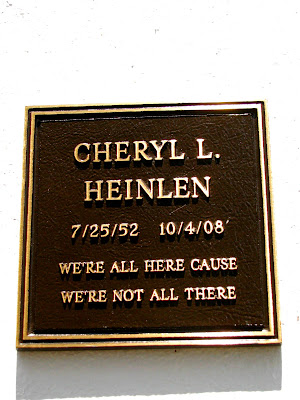 This memorial plaque prominently displayed at the entrance gate took me aback. I knew Cheryl and it is rather a shock to realise that I am at last of an age to find reminders of my own mortality at the cemetery. She lived next door to me when I lived at anchor off Rat Key north of Key West. This elderly picture is from the early 90's if I recall correctly. She lived with birds dogs and briefly with a hedgehog on her boat. And now she is in the cemetery. 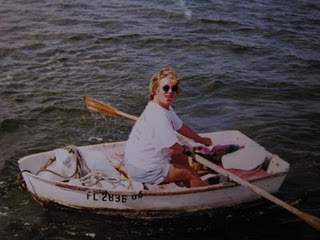 This next sign expresses perfectly the frustration and the very neighborly reason for the pleasantly worded plea. 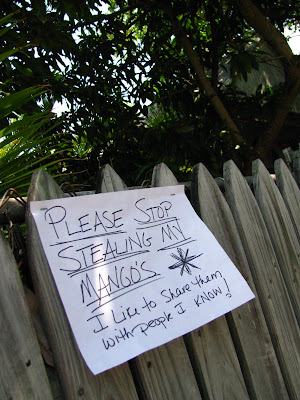 Stealing fruit from a tree is theft and clearly the owner of these magnificent trees has a perfectly good use for the abundant harvest. I rode past the sign and had to circle the block (Olivia Street is one way) to capture this perfectly worded note. 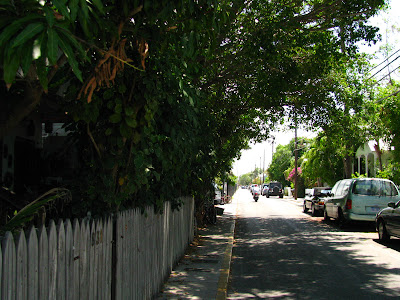 Go Conchs indeed. Conchs (the aitch is silent as my colleague Karl is fond of saying) do like their local sports and the high school Conchs (say "konk") are closely followed. 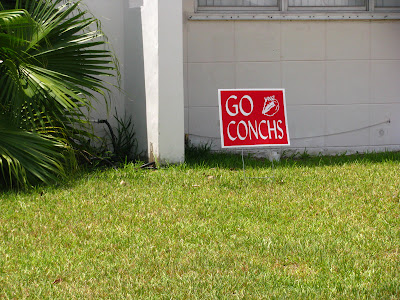 I have watched the actual mollusks walking painfully slowly across the floor of the sandbanks of the Bahamas and encouraging a conch to "go" has a nicely absurd ring to it. but around here it's deadly serious business on the playing field.
Posted by Conchscooter at 11:01 AM 4 comments: 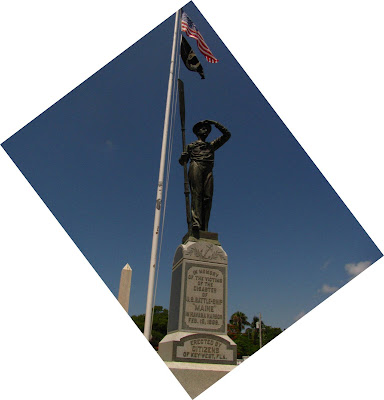 There is a splendid monument to the USS Maine in the key west cemetery and as just about every visitor who ever was in the city has photographed i figured it was about time I came back and pondered the story of the sinking of the Maine. 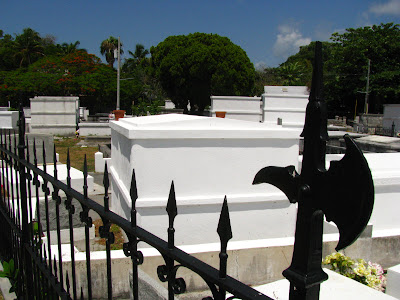 The cemetery holding the sailors from the Maine, and a few others, was built in Key West where the survivors and the dead were brought after the Maine blew up in Havana Harbor in 1898. At the time the explosion on the Maine 274 sailors lost their lives and 89 survived including the Captain Charles Sigsbee whose cabin was aft out of reach of the explosion. There is a Navy Base in key West off North Roosevelt named Sigsbee. 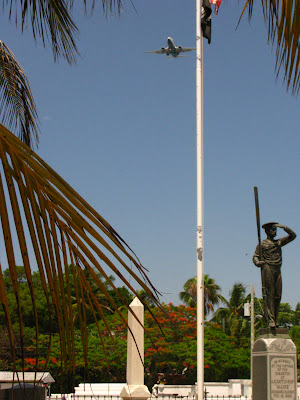 The explosion was blamed on a Spanish mine as Spain was putting down the latest Cuban rebellion with whom the US sympathized, though modern investigators suspect a fire in the coal bunker may have blown up the ammunition in the battleship the night of the 15th of February as the crew slept. In any event the destruction of the ship was used as an excuse, a Gulf of Tonkin excuse or a WMD excuse in modern terms, to enter the war and win the Philippines, Puerto Rico and Guam as trophies of the war for the US. 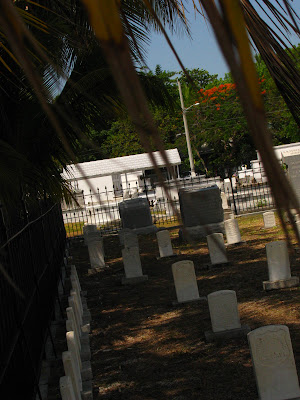 It was the prompt entry of the US into the war that created grounds for speculation that the US may have blown up the Maine as a reason to go to war with Spain, in the manner some people say President Roosevelt deliberately allowed Japan to attack Pearl Harbor to get the US into World War Two. I think both opinions are pernicious slanders but there again i believe Al Quaeda it was that bombed the Twin Towers. These conspiracy theories are nothing new. 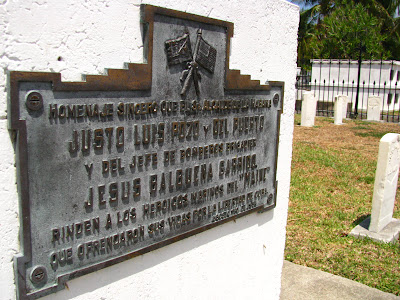 As it was Key West played a significant role in the aftermath of the explosion, with the bodies recovered from the wreck buried in the plot at the cemetery where they added the plaque above to the honor of the Mayor of Havana who did his bit apparently. 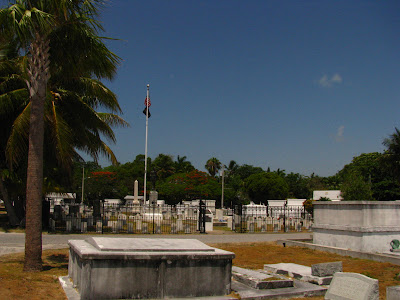 The court of inquiry was also held in Key West and now that the the war has faded into distant history and is all but forgotten- what piece of history isn't? unfortunately- this small piece of fenced land is about all that remains of the USS Maine and it's story.
Posted by Conchscooter at 5:01 AM No comments:

The sky was totally weird Monday, gray thick and overcast. This is a picture of the sun not the moon. My wife announced she was bagging going swimming as the ocean was going to cold after a day of total overcast shadow. 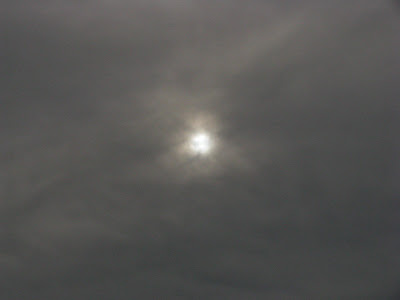 Colors were flat and so was the ocean even the relatively deep waters of Spanish Channel north of Bahia Honda. These waters are forty feet deep in places, I've sailed them, and that's deep for the Keys, but there was no wave action at all to speak of. 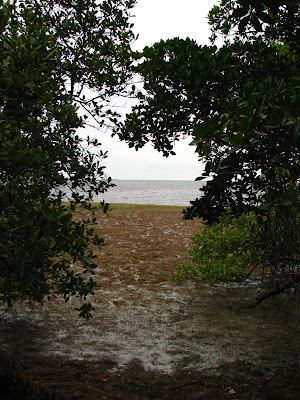 Everything was gray and flat. 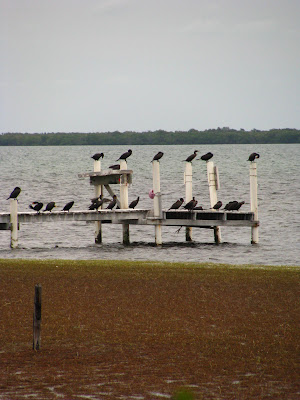 This sort of weather gives me sinusitis, a dull headache between my eyes and I associate that with foggy summer days in Northern California or any old day in Seattle. To be socked in with clouds in the Keys is a crime. 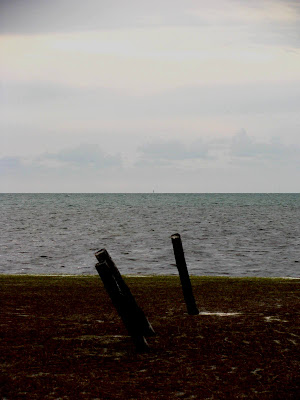 It was hot and muggy and felt like rain though rain never materialized in the Lower Keys. It only lasted a day, all foul weather is short lived around here happily, but while it was looming overhead it was still 90 degrees here on earth and Cheyenne was panting. 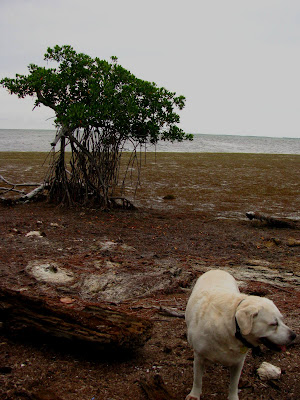 One gets horribly spoiled living at 24 degrees North latitude. One comes to expect sunshine every day, bright colors and warm waters. One stamps one's foot like a child when one does not get it. The tantrum will pass.
Posted by Conchscooter at 12:01 AM No comments: