I am gifted with a  peculiarly puerile sense of humor which, combined with my fine sense of irony tends to make it possible for me to enjoy social distancing and quarantine as gifts from the gods. My wife enjoys some British television but after a quarter of a century I know pretty much that the television and more particularly the radio shows that I listen to on BBC Sounds do nothing for her so when I am driving alone I find my meditation in laughter, private and personal. Which is by way of saying I still find Monty Python not only nostalgic but funny. So when I decided I was no longer going to ride a motorcycle I found myself thinking about the parrot sketch. I am an ex-motorcyclist. 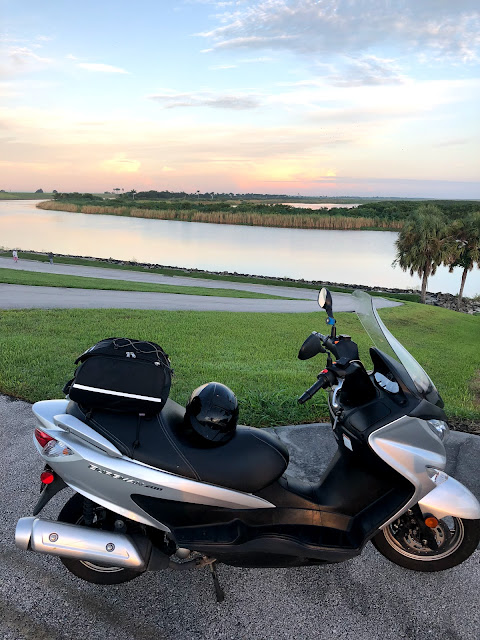 Less than two weeks after I took the photograph above on the levee at Lake Okeechobee I was knocked off the scooter and we both ended up on HIghway somewhat wrecked. That was two years ago today, and I am now selling off the replacement for the machine above which was destroyed and I have no plans to ride in the near future. After half a century riding all over the world I should feel some nostalgia I suppose but oddly enough I have  a mind that not only enjoys puerile humor, but also looks forward and not ack, mostly. 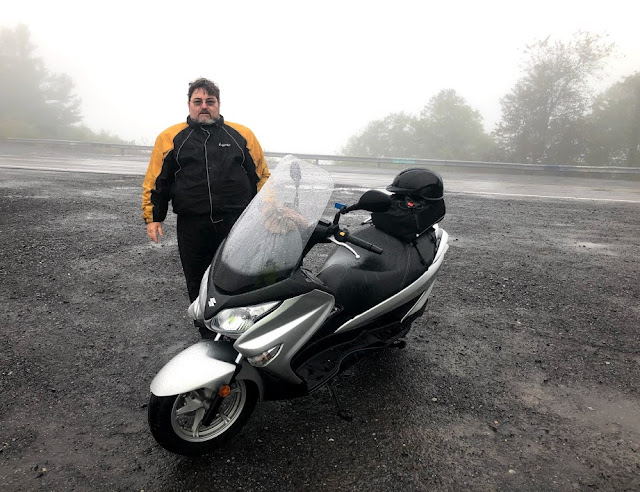 There are several reasons why I have chosen to stop riding. The easy explanation is that an accident requiring four operations, 80 stitches and three months in the hospital and a four thousand dollar copay for a half million dollar bill might be the cause but it goes deeper than that. I got lots of help from friends and employers, my wife half killed herself managing everything and my dog didn't get to see me for a month. I fear were I to fall off again no matter the cause or the fault I might be the object of some rather justified compassion fatigue. Furthermore I don't miss the frequent maintenance schedule of a motorcycle which seems to be a constant round of tire changes, oil changes and assorted fiddly touch up and repair jobs. My van has an oil change schedule of once every ten thousand miles. 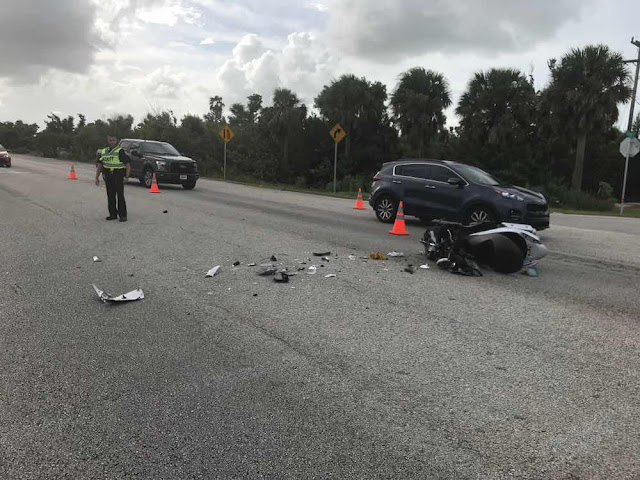 The joy of riding has left me. The Keys are not a motorcycling paradise anyway but traffic has worsened considerably now the Highway is wide open again and every day I witness what can only be described as bad driving. Racing tailgating and reckless passing are objects of curiosity when you are in a  car and can pull onto the shoulder with ease but I don't want to be hit again by a distracted driver. Broken bones hurt quite a lot, quite aside from the acute disruption to daily life, and having lived though an extended stay in the hospital I have no completed that life experience and came away with lots of valuable lessons. No need to go for a repeat. Of course the irony will be manifest if I find myself crushed in my car... I have always been a traveler and I remain one. This blog hardly reflects that side of my personality as I started this page in the middle of the longest stationary period of my life. However now the pensions are earned and old age is upon me the idea is to get up and go. This time I will go in a big bad van, a vehicle even the distracted notice...but more importantly I can travel with wife and dog and the comforts of home. This has developed a great deal of appeal to me as the van will allow for extended travel with no need to go home, I hope, to recharge my batteries. The ability to travel like that is the big appeal of not riding. 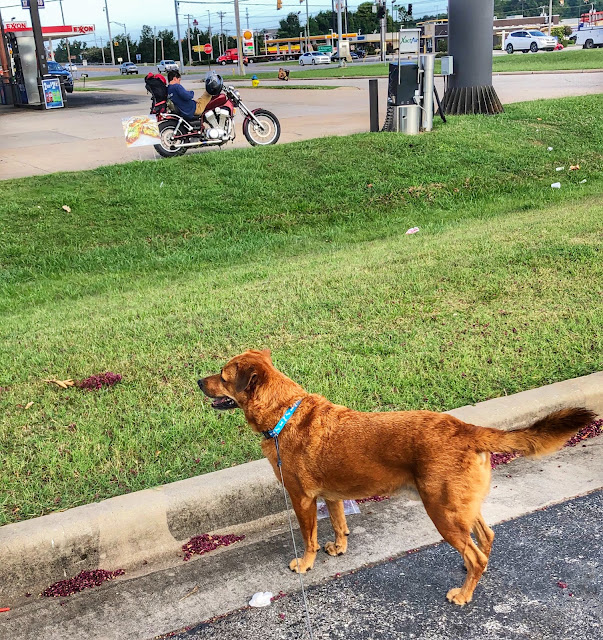 I could see a time in the future when I might ride again, given the physical ability to stay safely upright on two wheels. Were I to live in a region of interesting riding roads with not much traffic it could happen. How I might find myself in a such a place I can't imagine. I expect Key West and salt water to be in my retirement future but my life has rarely been a linear progression from one sensible thing to another. No need to start rationalizing that now. 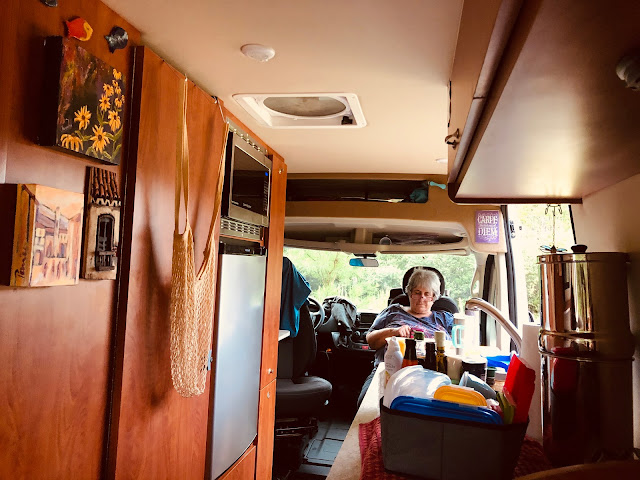 Perhaps, independent of the accident it's a matter of aging. The need for speed, such as it is with a 200cc scooter... may be replaced by a  more reflective way of travel. I know that I am very much looking forward to time being on my side, not having deadlines, not getting cold as I drive, not having to be somewhere because I am retired and my relationship to time has become a bit more elastic. To travel with my home is a way I hope to expand my horizons, not limit them to a very small space. And the interior of the van is very small indeed. Some people have larger clothes closets. A paradox then which I find intriguing especially as I enjoy traveling slowly in the tank that is the Golden Van. Yes I enjoy drifting along and pulling over to let others by. A marked change. My wife has noticed this tendency and she is happy so it must be good. 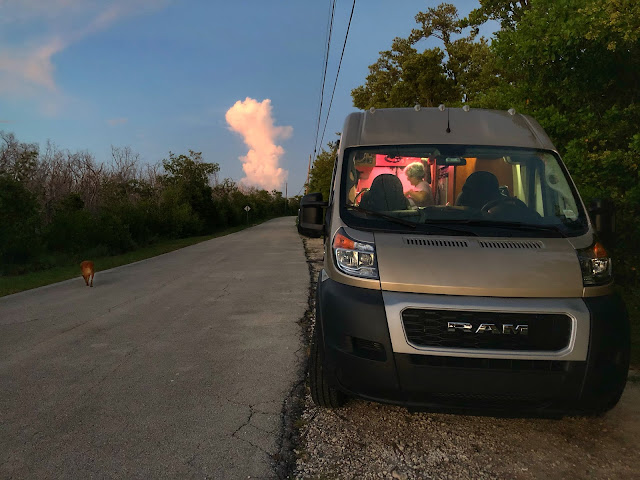 Retirement in Key West continuing to live where I live is possible financially speaking but I am not clear how or why I would do that. Instead of a van we could have a boat and go sailing overnight to various mangrove outcrops and so forth which would leave Rusty unhappy and me unsatisfied. I don't fish and I don't hang out in bars and I don't get an energy boost from managing committees or handling personalities and volunteers and that other classic busy work of retirement. There is a reason communities get a boost from retired people with valuable skills volunteering their knowledge but I ma not by temperament or training one of them. As much as I like Key West I have nothing to offer this place and I have still this persistent desire to see different places. I can't do it by motorcycle anymore. So I am an ex-motorcyclist. That chapter is closed for now. It is odd to acknowledge it.