My wife and I were debating how long we lived in Ft Myers and we came to the conclusion it was about 9 months out of our lives that we will never get back. I have actually lived there twice and neither period was the happiest in my life. It's an odd thing because Ft Myers on paper should make an excellent place to settle down. I laughed when I saw this billboard- Go Green! as everyone climbs on the bandwagon- with waterfront condos in the building behind it going for a mere $69,000 dollars... 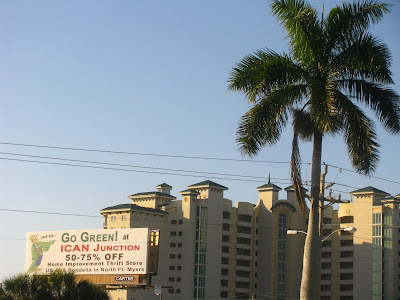 Southwest Florida is the inexpensive part of sub tropical Florida. There is no zoning to speak of, land speculation has been rampant which is why this is currently one of the epicenters of foreclosure chaos in the United States. And where land and homes are cheap, everything else is inexpensive too, not forgetting that Florida has no personal income tax and a relatively low rate of sales tax, around 7.5 percent depending on the county. We stopped for coffee at a Dunkin Donut next to a Valero gas station and I saw this place mat which tickled my funny bone- a desperado on a motorsickle promoting "All American" gasoline. Image, everything is image. 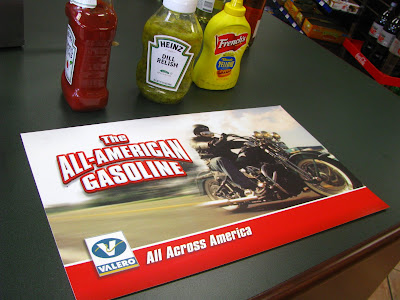 Historically Southwest Florida was the retirement place in the sun for union auto workers from the Upper Midwest. I-75 runs straight here from Michigan as though a conduit for people of modest means to enjoy old age away from blizzards. During the boom years this area attracted younger people and families looking for an inexpensive place in the sun and businesses were attracted to the relatively low cost of land. The airport is big and has connections all across the country, Naples to the south is the wealthy opposite number to Fort Myers, a city that attracts millionaires and has, like Ft Myers grown out of all recognition from its more humble origins as a small Florida backwater. 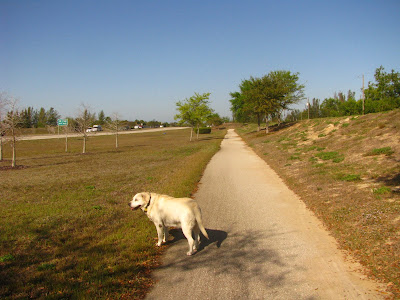 These towns have everything you could want from corporate chain store America. Household furniture, batteries, fast food, medium fast food and steak houses, cars trucks and motorcycles, everything that is for sale is to be found here and if you have to drive more than three miles between Publix supermarkets you should be surprised. The greater Ft Myers area, originally a US military fort on the southern Indian frontier, is now a spider's web of four lane highways masquerading as streets. Ft Myers is twenty miles up the winding Caloosahatchee River, a half hour by speeding car from the endless sandy beaches of Ft Myers Beach, the kinds of beaches visitors seek and do not find in the rocky Florida Keys. 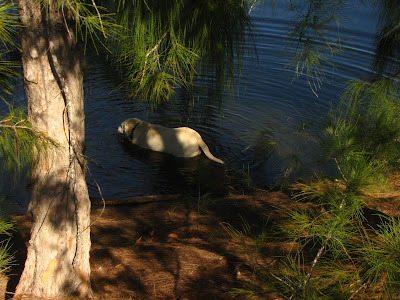 My wife and I found it impossible to live here. Politically Naples is the epicenter of tea bagger knee jerk Republicanism, and Ft Myers isn't far behind. This is the town that flies billboards proclaiming the ten commandments and anti abortion messages, cars carry the pro choice tags approved by the state despite a court case arguing their implicit government endorsement of a religious message and so on. Stuff I don't have to put up with in the Lower Keys. My wife the Jew encountered overt anti- Semitism when she started her teaching career here and to be gay and a teacher is simply not allowed ( a state law totally ignored in Monroe County). My wife's personal trainer and her husband retired here and our main mission was to spend a morning with Sandy and get some new exercises to take back to Ramrod Key with us. 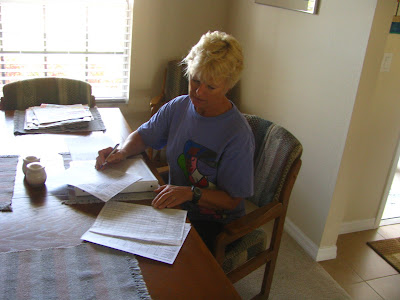 Sandy is my wife's favorite trainer not least because she understands and makes allowances for my wife's arthritis. For me she gives me exercises that wear me out in short order and will keep me busy until our next meeting in a few more months. Cheyenne hung in the car for a while and when I let her out she sat at the door acting like she missed me. Good dog. 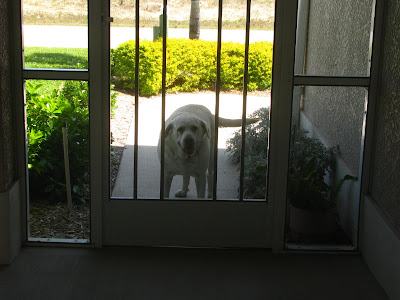 One thing I notice when I am on the mainland is how much space there is. we drove past open lots, miles of grassland and endless forests, but in the cities themselves there are miles of unused spaces. Places to park cars and simply let them rot away. 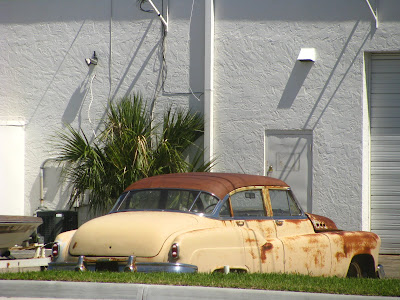 One thing I can't stand about living in Ft Myers is the way I speak and it's effect on my daily transactions. I have a rather peculiar mid Atlantic accent after 30 years residence and when I open my mouth anywhere in Southwest Florida heads swivel all across the supermarket. My wife made endless fun of me when we checked in to the hotel. I said nothing at all, filled out the paperwork and when we were safely outside the office I turned to her and said, "See, she didn't ask me where I'm from!" Triumph. "Because you didn't say anything!" she teased me, she who knew what was going on and answered all the check in questions. In Key West, known to many as Key Weird I don't stick out. In Ft Myers I am an alien from another planet and it gets tiresome. 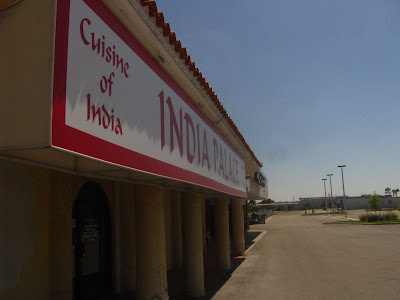 That there is a sizable Indian community in Ft Myers shouldn't come as much of a surprise, but we do like to take advantage of the Indian cuisine that is available. 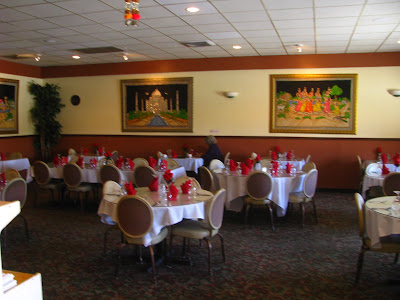 It's these kinds of restaurants that remind one of some of the limitations of life at the end of the Highway. Indian food is one of my wife's favorite ethnic cuisines, and the shortage of that and reliable Mexican food in the California style is her major complaint when eating out in Key West. the fact that we don't have it at home means we get extra pleasure from it when on the road... 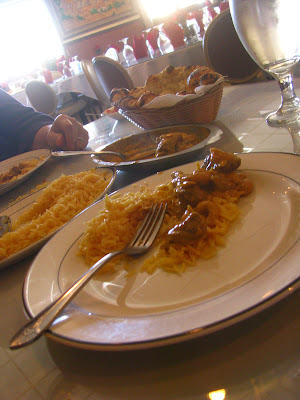 Garlic naan and lamb and fragrant basmati rice which we shared with a selection of appetizers made lunch a memorable meal. We used to eat here a lot when we lived in Ft Myers and we are always glad to see this place is open when we return. 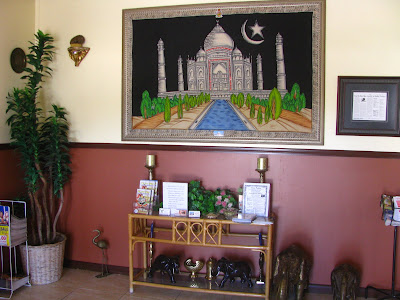 Distances between Ft Myers and Cape Coral seem endless, miles of four lane streets running hither and yon, which when we are on vacation doesn't matter too much at all, but every junction is a Le Mans style start when the light goes green. There is another phenomenon I have noticed in Ft Myers that I call the "west coast creep." Vehicles leave excessive distance between them when they stop at lights and then nudge forward a few feet at a time until they are tail gating each other waiting for the light to change. On a motorcycle that kind of behavior is massively irritating as you have to paddle forward or engage first gear and disengage to keep up with the creeping cars... Vehicles with Ft Myers tags do it also in key West I have noticed. 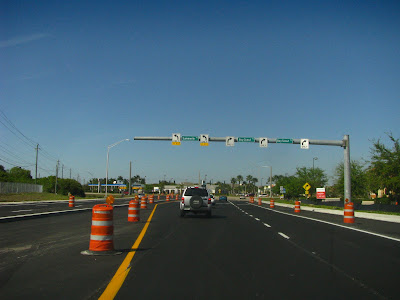 Cape Coral on the western side of the river (or north depending on your perspective) is a vast city scattered across open fields in a planned community that never quite materialized as planned. The result is houses scattered far and wide in open fields connected by miles of long straight streets. Very odd indeed. 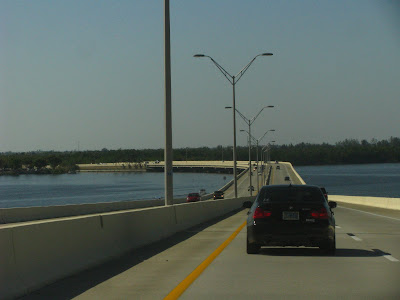 Ft Myers, not Orlando, not Miami, and certainly not Key West. 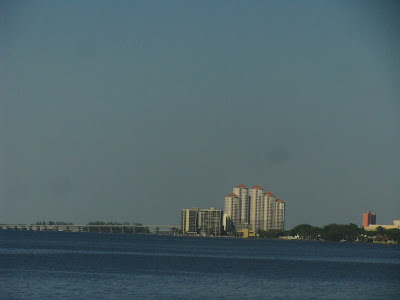 If you have a yen to go shopping or to eat Indian food this is the spot. Or even to find and inexpensive spot to sit out winter and enjoy the world's best beaches, this is it.

Posted by Conchscooter at 12:01 AM 9 comments: Links to this post