It pains me to admit it but I did abandon this loving trusting animal for a few hours while my wife and I went to have fun in the surreal world of Salvador Dali. 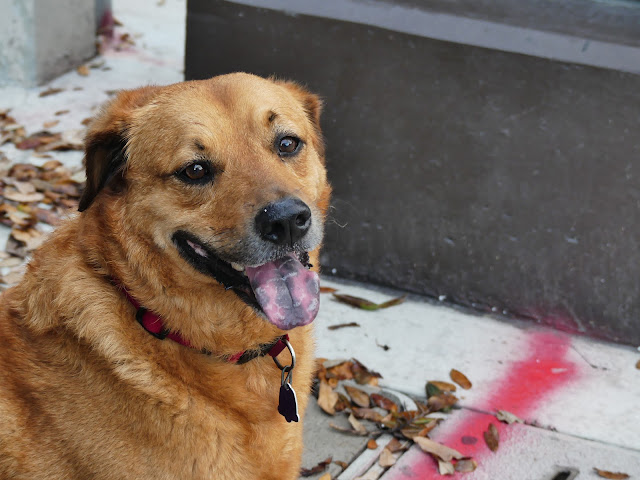 Apparently the two young people who take care of him for a few hours (Dog Sitting Nationwide) walked his little legs off and sent us tons of pictures while they had fun together. I reluctantly decided to feel less bad for the little tyke especially as Rusty passed out when we got back to our room. 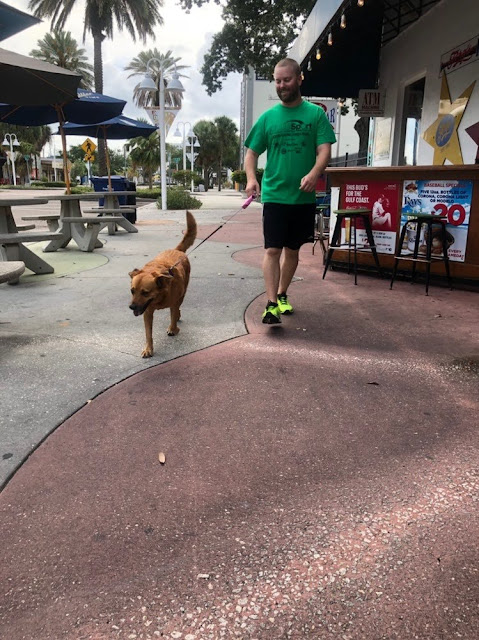 Meanwhile back in adult land I finally got to the Dali Museum again, after our last planned excursion was denied by my Catastrophe the Friday evening before. We had planned a trip to St Petersburg last September 1st however I unfortunately had to cancel owing to a prior engagement with my Maker, which I managed actually to dodge. However by the time I was out of hospital and somewhat mobile the exhibit we had wanted to see, Clyde Butcher pictures of Dali's home town in Catalonia, had already closed.  Bugger. 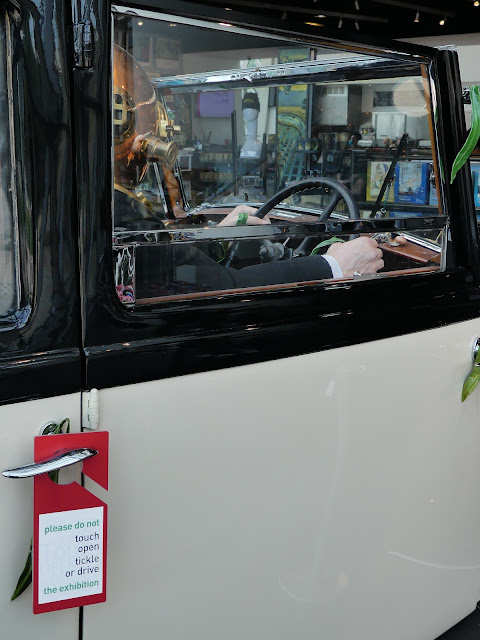 So here we were a few months late for that and a few days early for a new Dali and Goya  exhibit for which we plan a return in July. That will also be an opportunity for me to build up my strength and ability to take road trips. I used to think nothing of fourteen hour days in the car, which is useful when seeking escape velocity from the orbit of the Keys at the very bottom of the continent. This time around I slept on the way up and drove on the way back and I was exhausted by the time we got home. I need to work on that. 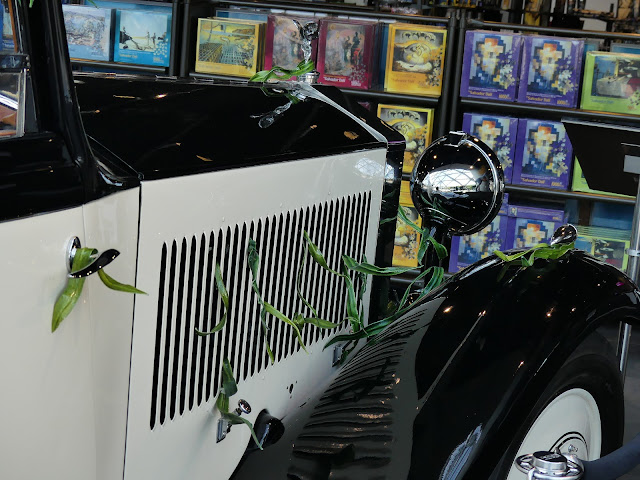 The Dali has an innovator at the helm and the list of exhibits  is fascinating and heps explore not only the artist but his influences and the influence has had on others. I remember particularly the Disney exhibit which taught me a lot about the beginnings of the Disney way of doing things, influenced even by Dali. Now they have created weird interactive screens with a representation of Dali speaking to the public standing before him. I found it eerie. 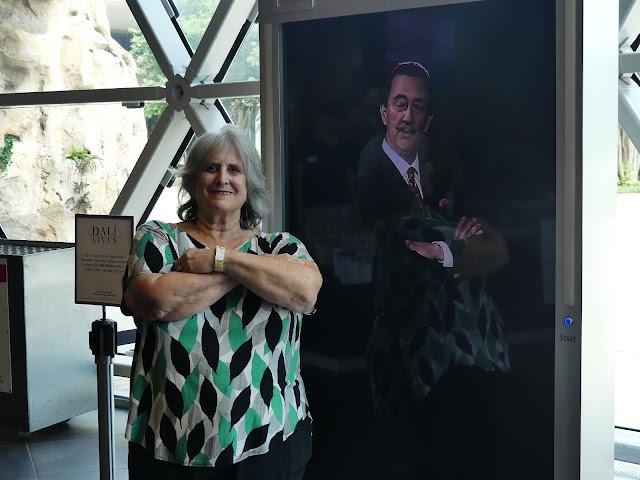 Anyway with no special exhibits to enjoy we used our membership's free admission to check out old favorites. In his early years Dali was quite the draftsman and I think it's those skills that make his later weird work so effective. I find this painting of a sunlit lane in Port Lligat very evocative. Perhaps thanks to my Italian childhood. 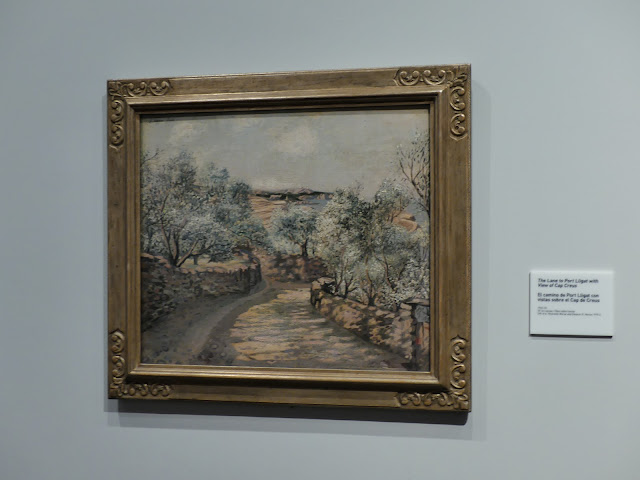 After the early years and getting thrown out of art school to spite his father and avoid becoming an engineer Dali went off into his surreal phase. He hung out with others of similar ilk until 1939 when they had a falling out and off he went to America during the war years. All this Dali Art ended up in St Petersburg thanks to a couple with enough money to buy and enough taste to recognize the value of the artwork. This is the largest collection of Dali art outside Spain. 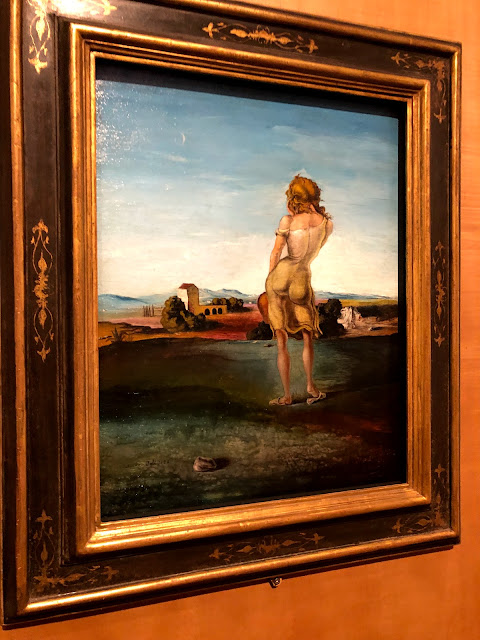 And he made sculptures too. I tried to identify the pieces by looking at them but most I had no idea. This was Don Quixote. So much for that. I got Perseus but a woman climbing a snail did not put me in mind of a woman climbing a staircase. I do not have a Dali mind, obviously. 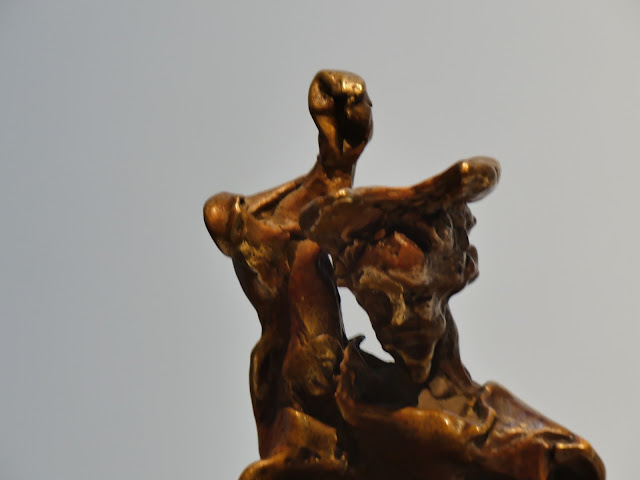 This is one of his wife Gala looking out of a window at a sunrise. 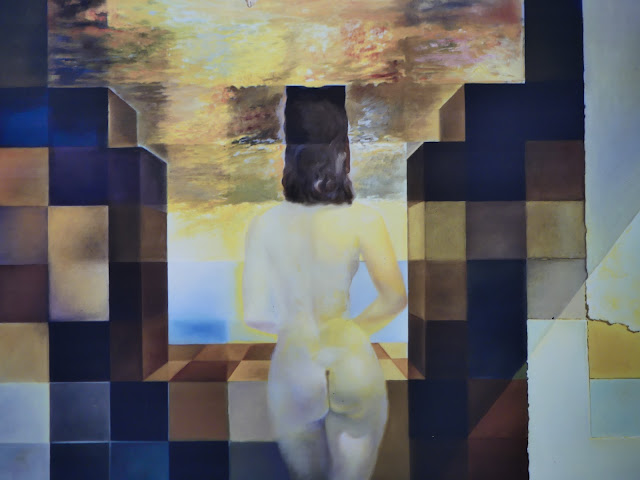 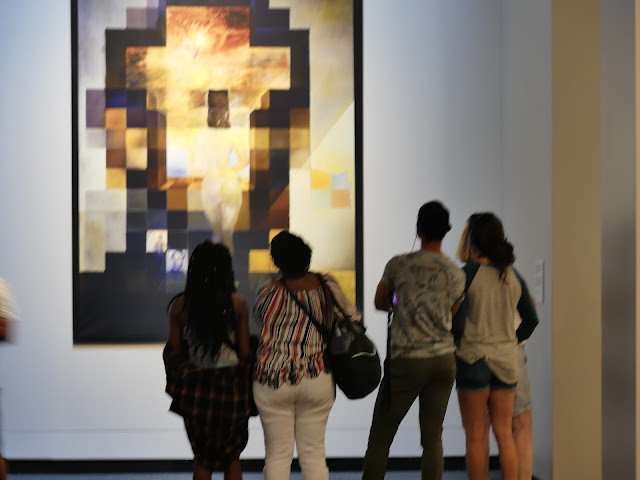 Fom seventy feet away it's the head of Abraham Lincoln. 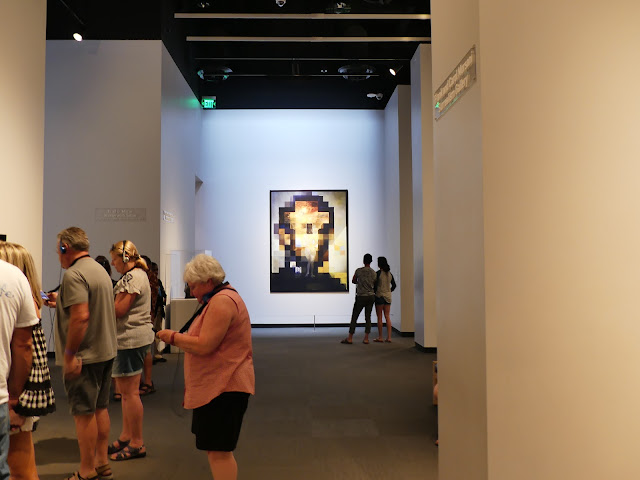 Or this lobster phone. How often have you wondered why the two aren't mixed up more often? Never, because you have no mind like Dali either. 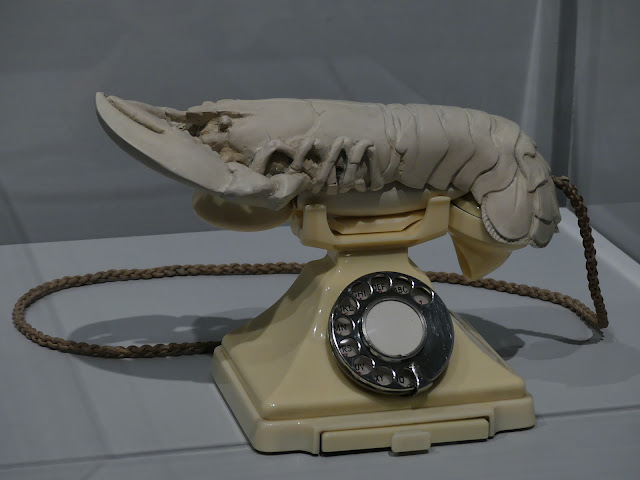 Some minor attempt at detail by the artist. In the middle of the picture there is an entire city represented. So there. 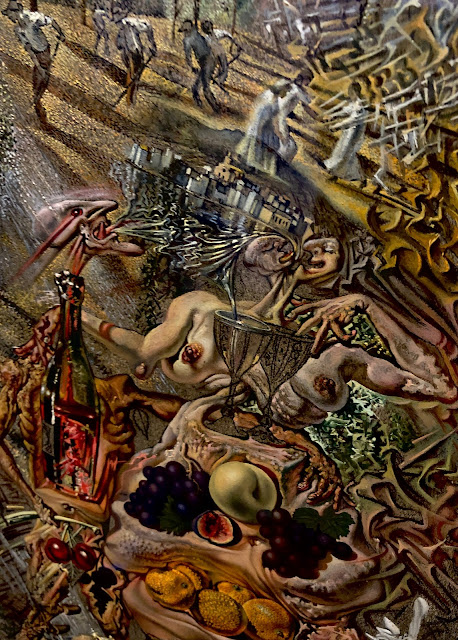 After a couple of hours it was time for fresh air and sunshine after first taking a peek through the hurricane proof windows and contemplating all the stuff just seen. 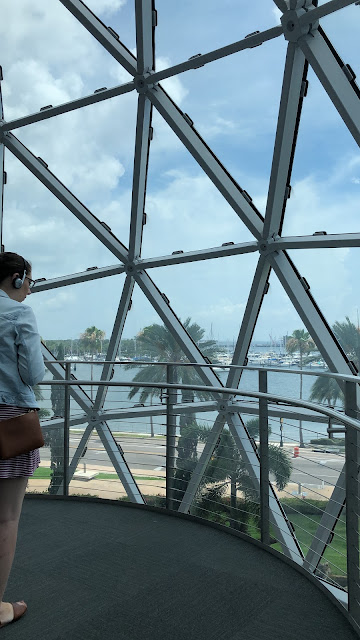 We, members of this august organization, had never wandered in the garden, so we did. 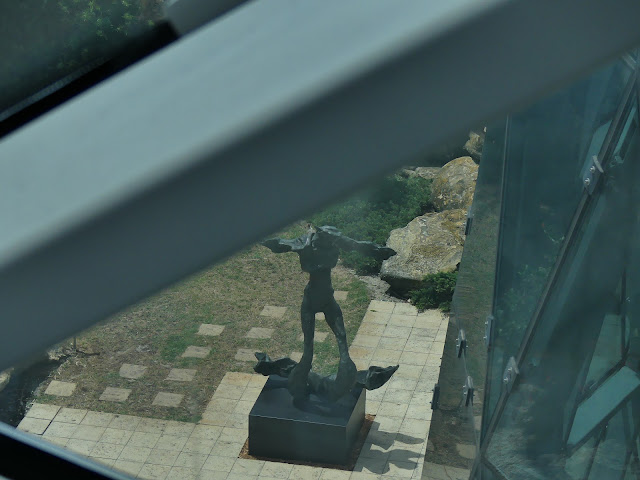 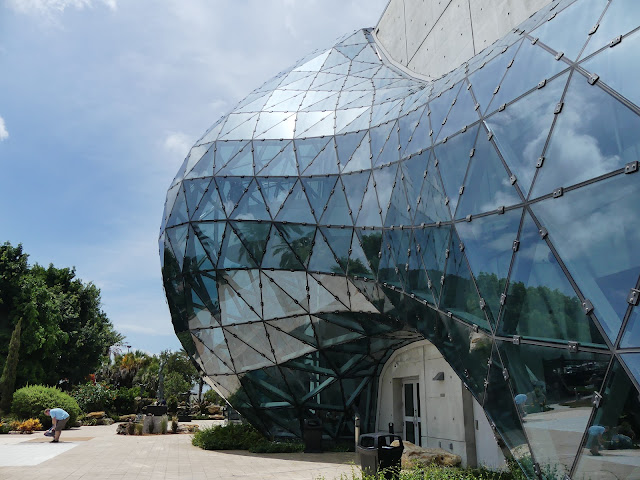 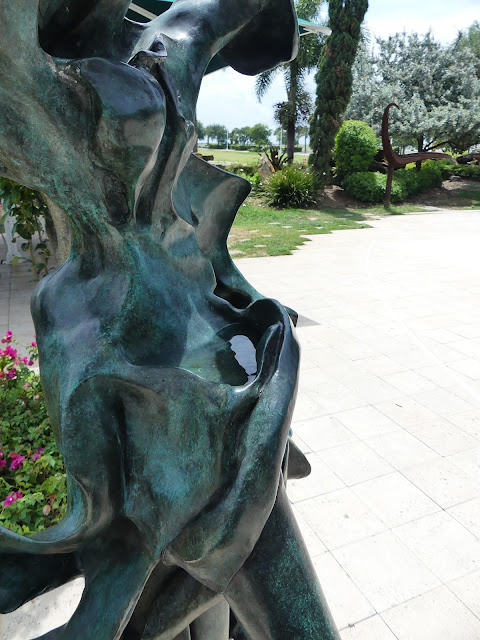 I saw a boat out sailing. It was small daysailer having fun i the marina but the funny part was the bigger sailboat behind them was coming in, under motor looking like a lot less fun. 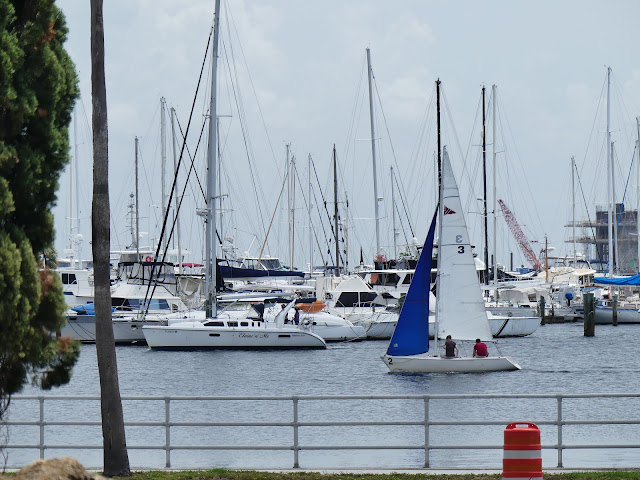 I like to take my cane-seat  in museums and though I had it with me I decided to try out Dali's molten artwork for a change. It was comfortable. Odd but comfortable for one. 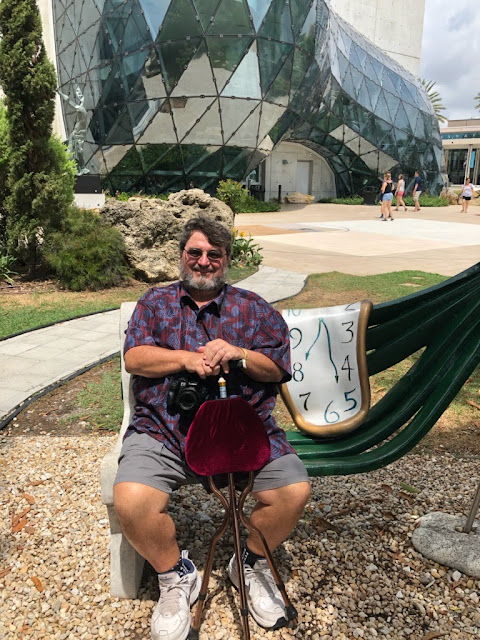 And there is also a mustache: 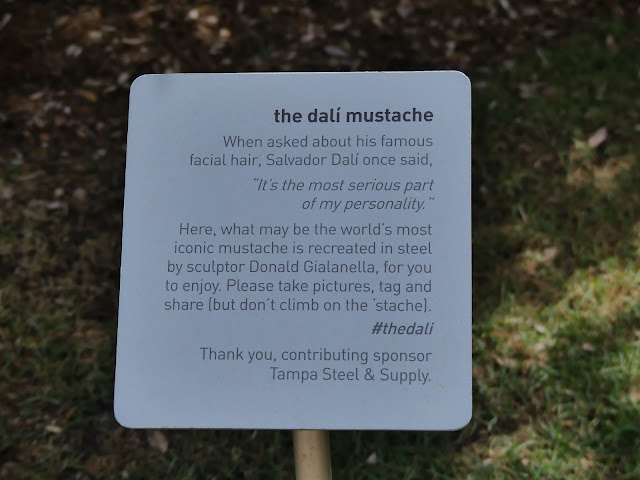 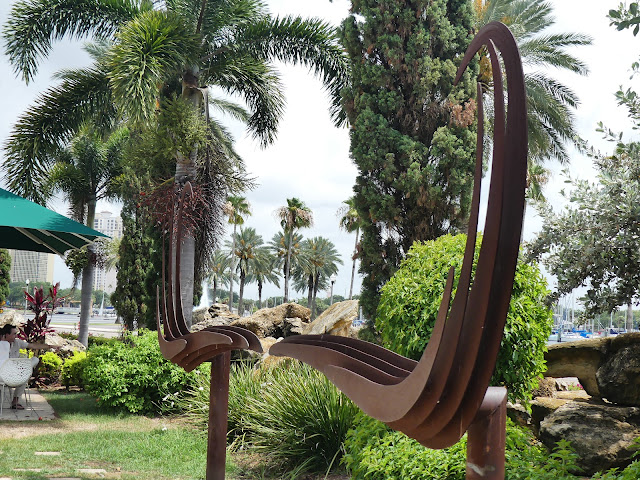 Before we picked up Rusty from his sitters we went for lunch on Fourth Street. 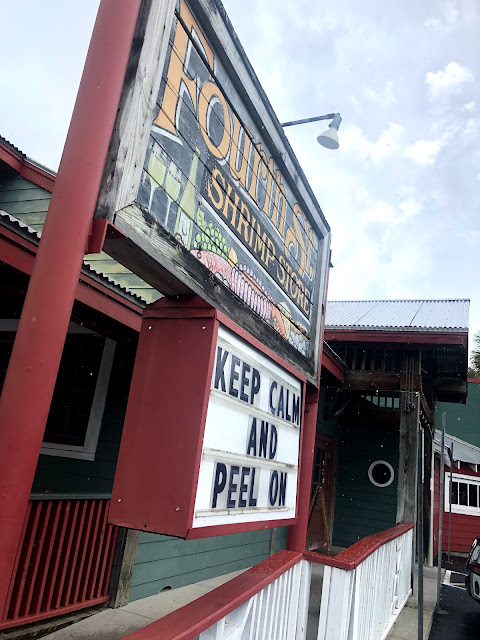 Crab cakes did look brilliant but they were just right, full of sweet crab. 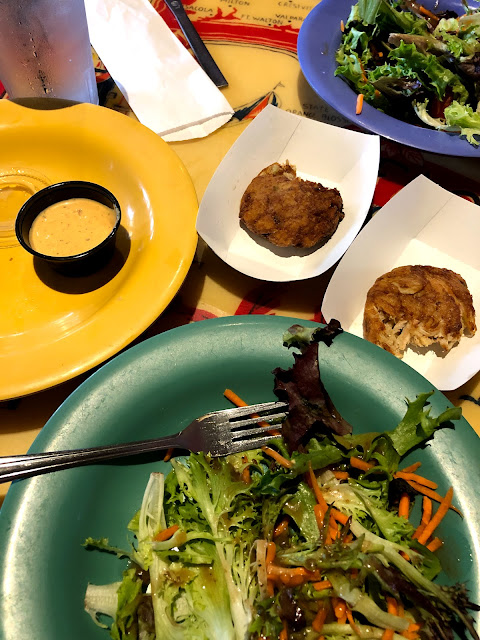 It was a delightfully old fashioned decor celebrating Florida on the table top: 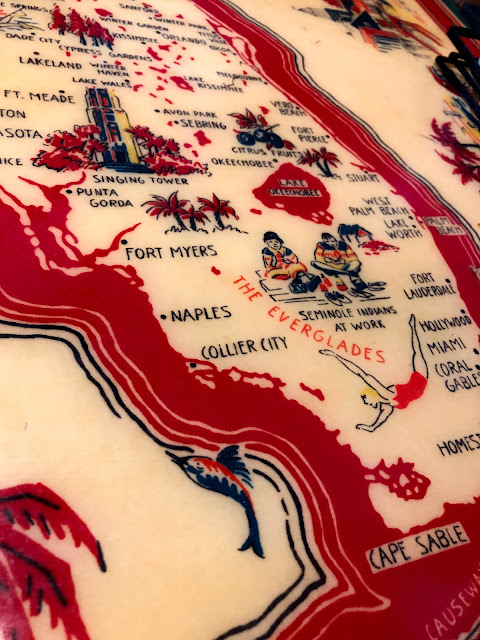 Fish tacos were full of fish, enough left over for dinner, so that was a bonus. 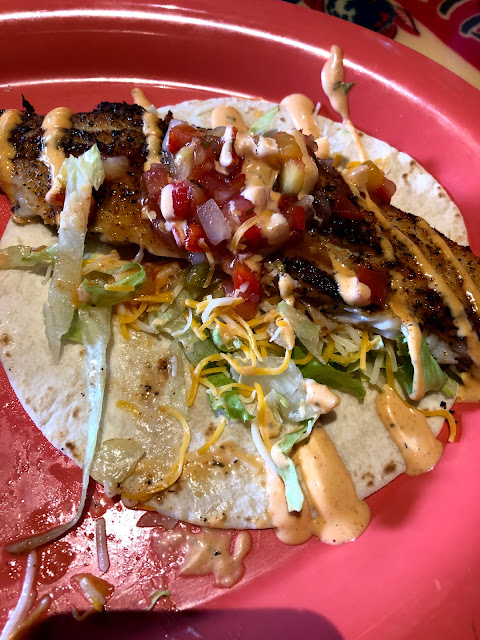 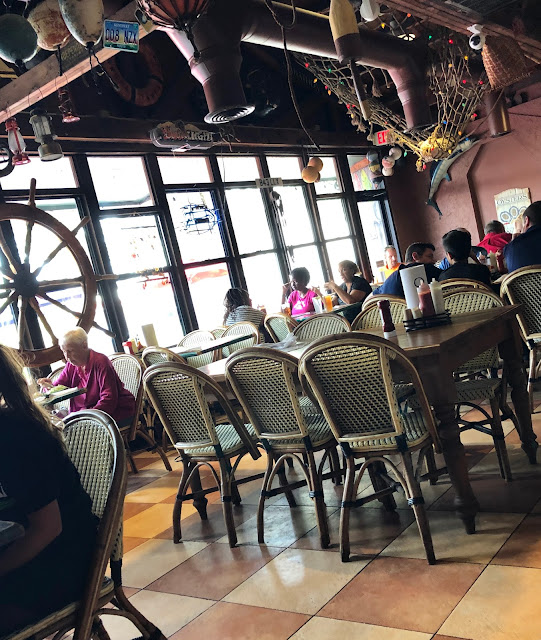 A quick stop at Publix which was connected  to the garage in the building which I actually thought was pretty cool in a  town where summers produce massive rains. 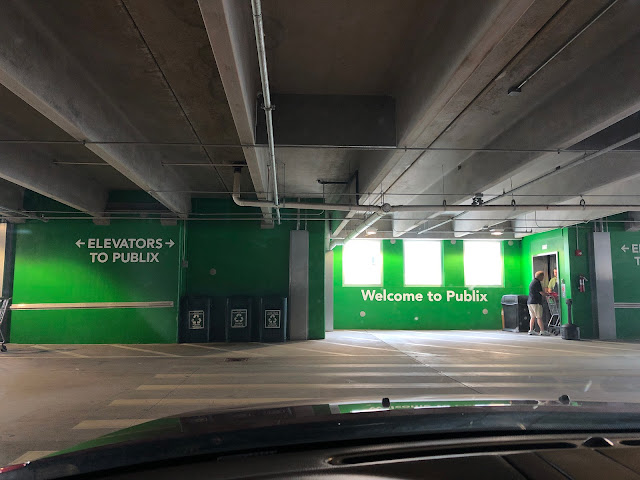 Another successful day in my second favorite Florida  city. 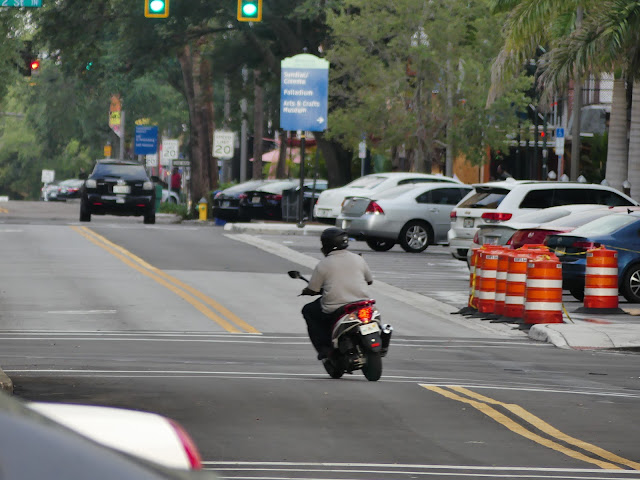