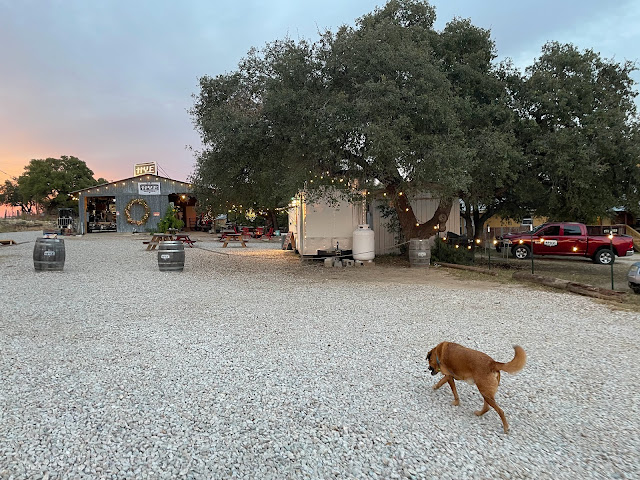 The Hye Cider Company is another Harvest Host discovered by Layne on their app. The parking area for the cider company is next to Highway 290, as Hye lies between Austin and Fredericksburg. However the highway is a level above the business so traffic noise is surprisingly muted. We arrived in the afternoon but after the requisite Rusty-walk we took to our bed and had a nap. You get to do that in retirement. 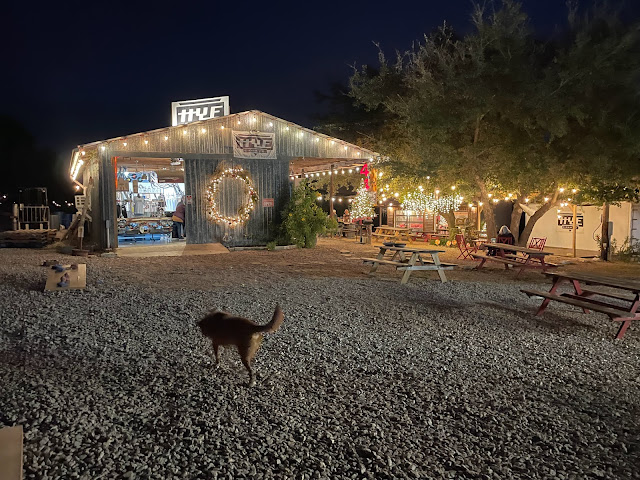 We walked across the lot at dusk and had a look at the ciders produced by this innovative company. Mandy the manager told us there are 148 wineries in Texas Hill Country but they are the sole cider makers. There are three in Austin but none others in the boonies. 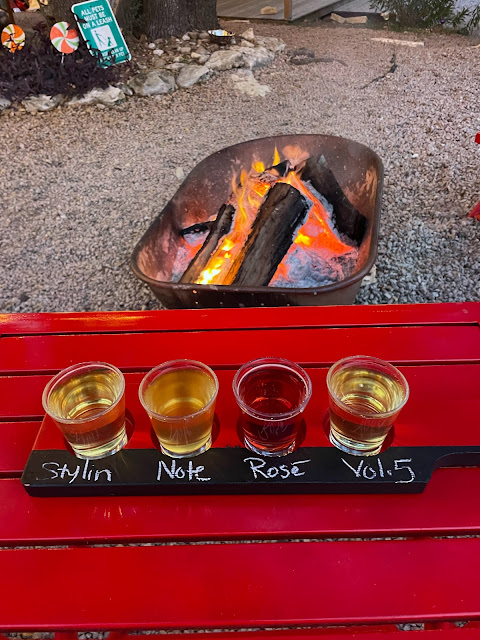 They make a range of ciders that are different to any I've tasted. There was one that showed 9.1% alcohol which were that an IPA beer I'd find horribly bitter and nasty, but in cider it just had a dry champagne taste. 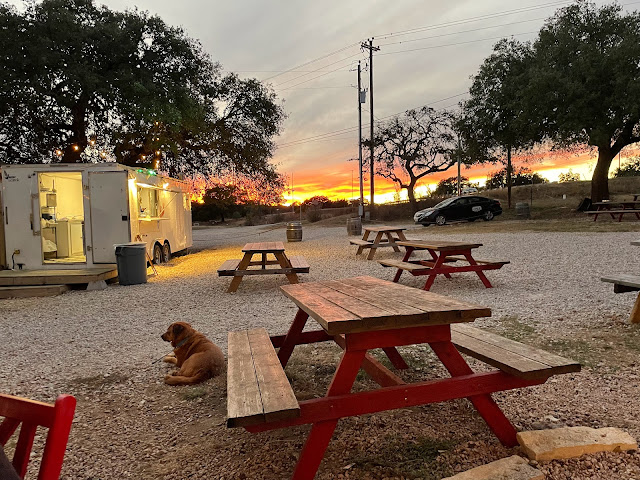 The rose was strong and fresh but the Volume Five had a strange Indian cardamon scent which didn't appeal much to either of us. They have eight different flavors on tap so there was more on offer than we could taste. We ordered a couple of glasses of the note to have with dinner, which came from the food truck in the background, above. 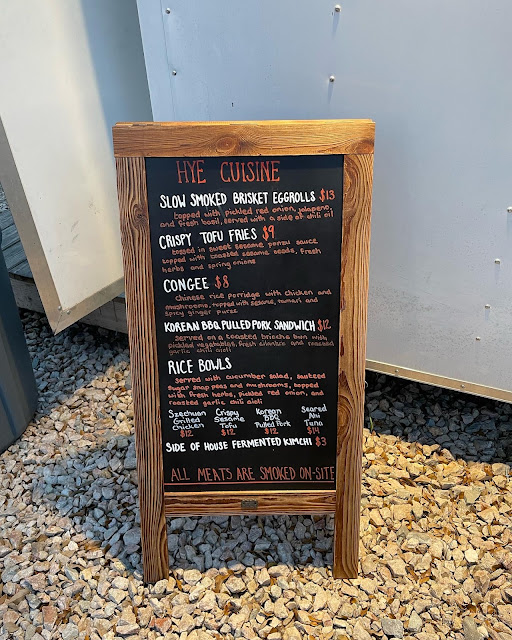 Travis and his wife Loren are both chefs but their tried to farm out the food truck to anyone interested but they couldn't find anyone reliable, even the successful operators who tried their hands. So in the end Travis the Texan barbecue chef and his wife Loren, classically trained in Italian cuisine tried their hand and they came up with some weird Asian fusion as described on the chalk board. The food was astonishingly good, peppery and full of flavor, we couldn't get enough... 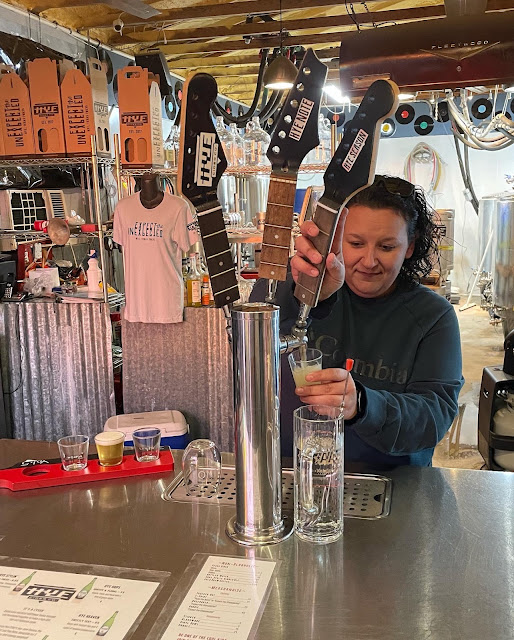 Above Mandy the manager at the draft tap. The staff was kept busy Saturday night with a forecast of 27 degrees overnight and the threat of freeze that would wreck their potted plants. 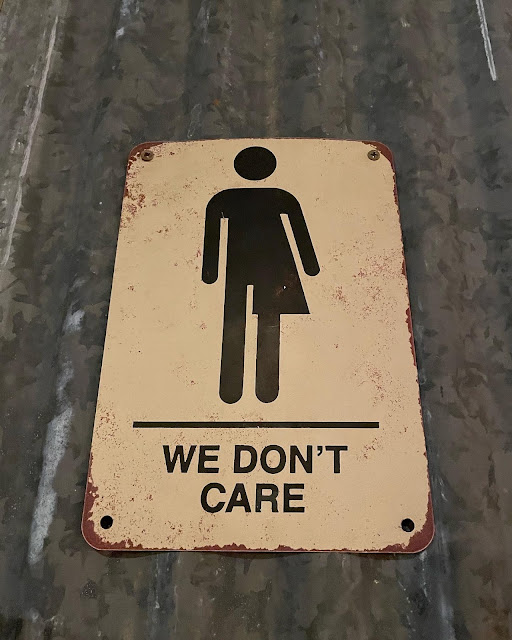 The cider company is obviously a labor of love and everyone seems to enjoy working there. We liked it a great deal and were happy to heat leftovers for lunch on Sunday afternoon as we drove toward Del Rio on the Mexican border. 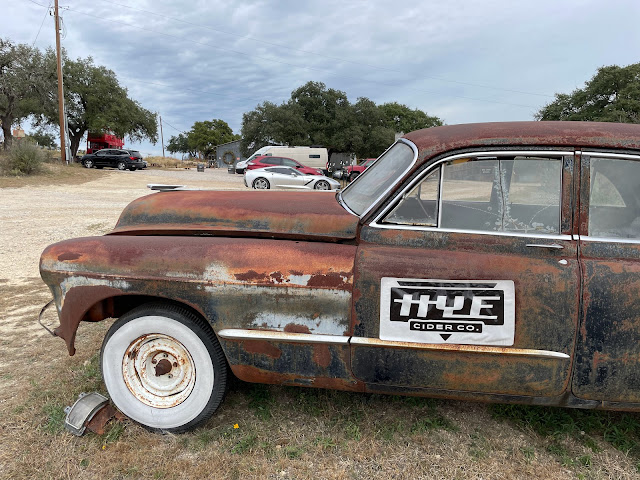 A Studebaker I believe, which was a nice coincidence after learning that day about Studebaker the car brand which started out in 1852 building Conestoga wagons in South Bend, Indiana, for the pioneers traveling to the west. We took Rusty for a walk up the road. The cider company has loose cats and chickens apparently though we saw. but one cat, and they want dogs on a leash. On the road we let him run as traffic was sparse and he hasn't forgotten how to sit on the shoulder while cars go by. A lesson taught slowly and painfully over the months on Blimp Road in Cudjoe Key many years ago. 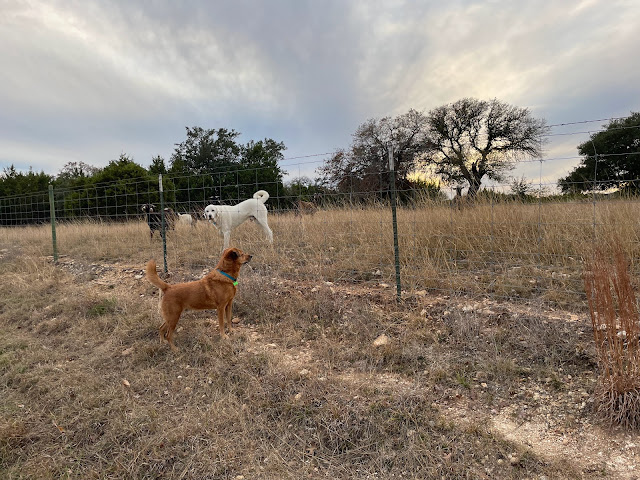 The well groomed white dog was hanging out with the goats and was delighted to see another dog. Rusty is doing much better with big dogs and he sniffed or a while through the fence. However when the white dog ran off up his side of the fence Rusty just stopped and stared and refused to play. 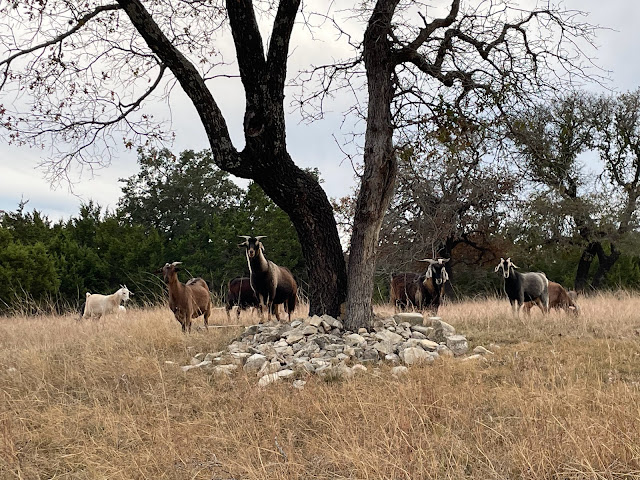 He was fascinated by the goats. 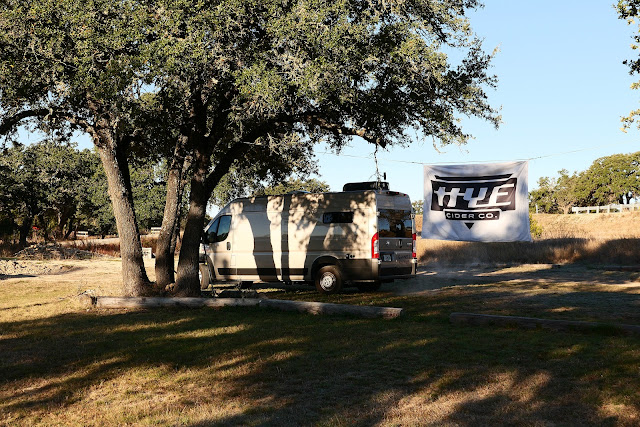 Our night in Hye was as predicted, freezing. We ran our portable electric heater while we streamed some TV and jumped into bed before the warmth wore off. I have to say that with our padded window liners in place our well insulated van isn't nearly so bad anymore on a freezing night. We got good practice driving to Chicago and we are handling low night temperatures better than ever. It was quite encouraging. 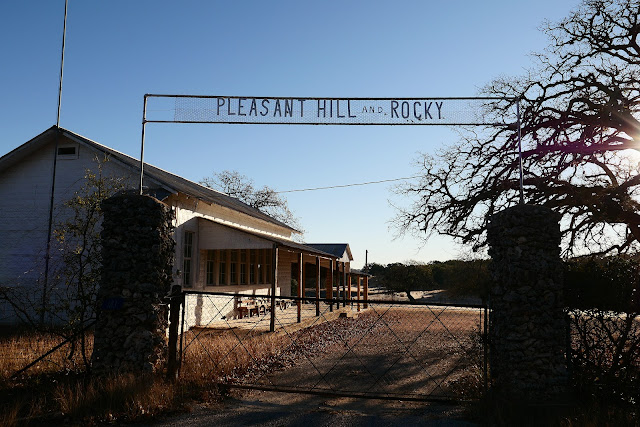 The front blew through and Sunday dawned clear and sunny but still cold, barely above freezing. Rusty yawned a bit as he lay next to me but I ignored him till 8:30 when I got up, turned on the engine to blow some heat into the van for Layne still under the covers. 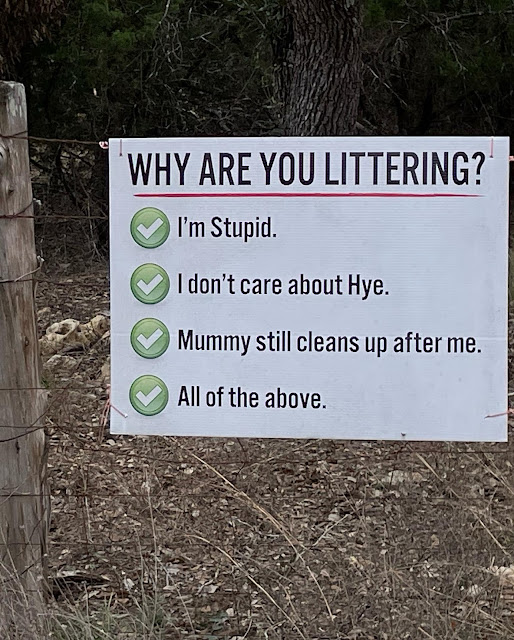 We walked back down the road to the goats but there were none in evidence. I had noticed the sign, above, which tickled my funny bone and by the time I got back sleepy head was up and boiling water for tea. Rusty sat and watched the world, his favorite occupation while I took down the window covers and Layne cleared the decks inside the van. 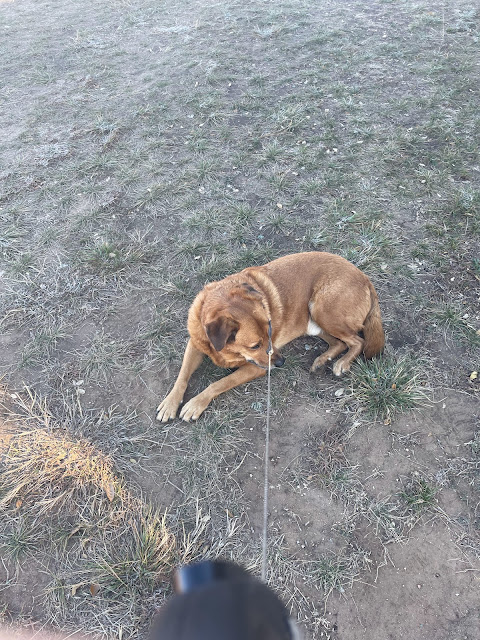 I did, by the way see some actual frost which I hope shows here: 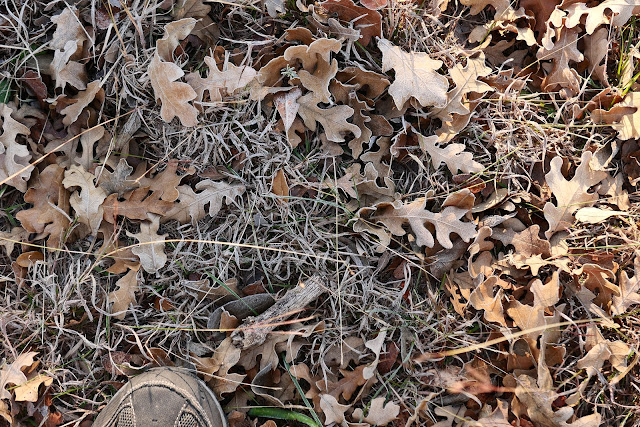 Next stop: The Lyndon Baines Johnson Ranch just up the road. What a busy pair of retirees we are! 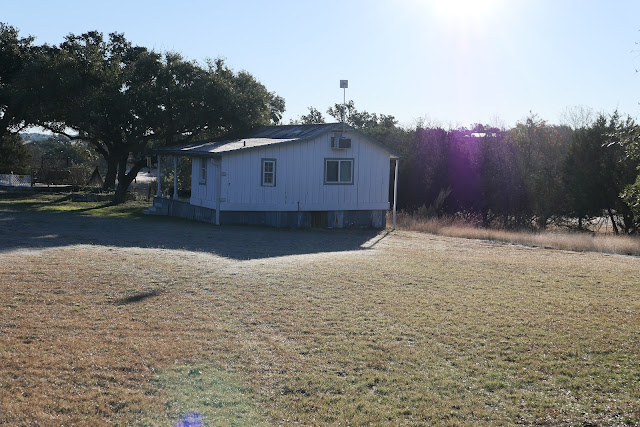 Posted by Conchscooter at 1:00 PM No comments: