All In The Family

Walk up to some random resident of Western North Carolina, high up in the Blue Ridge, and ask them where they moved from to retire in the mountains. Chances are many of them came to Murphy or Cherokee or Asheville from Florida to live in rural bliss away from the ocean and warm wet summers. I'll be honest and say straight out it's not my idea of living happily ever after but there's no accounting for taste. 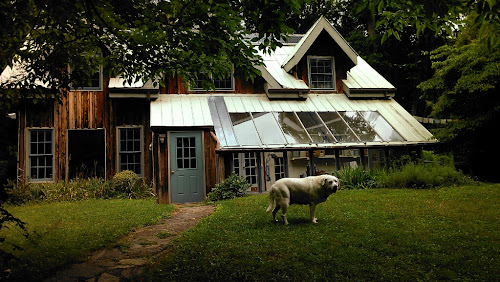 I do like hanging out at my wife's sister's place in the shadow of Mount Mitchell, the highest peak in the Eastern United States. The things I like are the trails through the woods, the long slow dusk that brings out the fireflies and the dew -that heavy wet dew! Bob and Judi came to Celo in 1978, joined the community and were awarded a plot of land to build their house in the woods. Judi became Geeta, a mother and as needed she took time off from job as a family physician to repair the kitchen fan. With less success than her doctoring. Fortunately. Her boys have their own kids, one in nearby Asheville, the other in California, she's retired with occasional stints filling in for local doctors she spends time in Kenya helping villagers to better health through her local Quaker meeting of Friends. 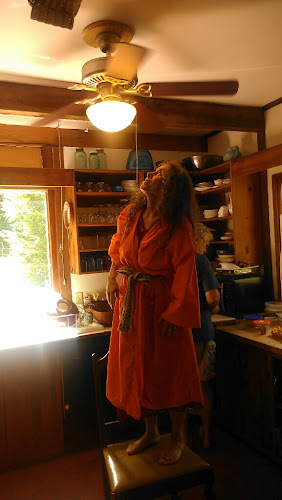 Bob retired from university teaching and loves living in the house he built forty years ago in the woods. The first time I struggled into the house twenty years ago after a long winding drive through the mountains alone with my then Labrador Emma in a quirky VW vanagon I was surprised to see the phone on the wall. It's still there and works quite well (except in rainstorms when the line crackles) but nowadays they have wifi, and if I stand next to the corner of the shed and hold my phone on the roof I can send texts by cellphone! Modern life! 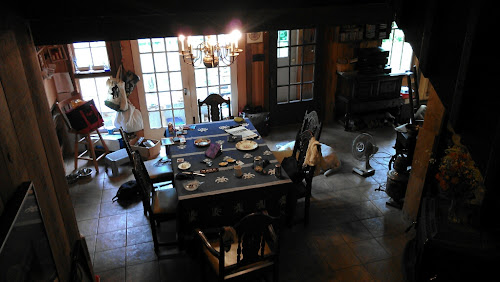 I like the way Bob enjoys his life outside the mainstream, it's not like Key West, but it's that odd modern mixture of hippy refusal to go mainstream mixed with the self sufficiency desire of a prepper. Celo is seductive, a tight knit family of a hundred people, solar panels, cows for milking, organic gardening, good for all. Well, not quite but these people who came here as educated drop outs have shown the locals a way of life that has changed the place here they live, attracting outsiders and their money to an economically depressed Appalachian world. Bob grows vegetables, picks berries and has figured out how to grow his own shiitakes, and we enjoyed the very fresh mushrooms, log to table in half an hour. Delicious. 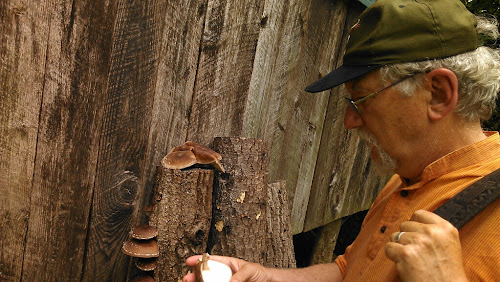 Celo is on the electrical grid and is flourishing with a second generation of inhabitants moving in. Homes are occupied, gardens are growing and people want to live here. I can see the attraction of a tight community in a world filled with uncertainty and social indifference. Celo is the happy place here strangers wave and smile as you drive by. Keys are unnecessary here and crime unknown. They do have electricty(!) and television...so beer chips and the World Cup Final, the new All American experience with a twist, was on the cards in Celo as much as anywhere. 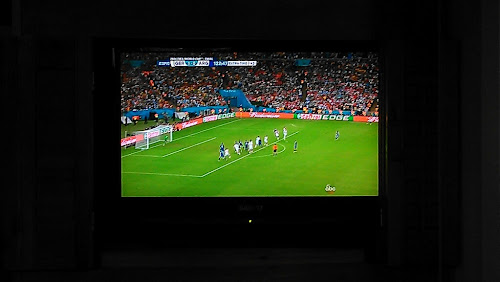 That Europe beat the Americans was a consolation prize to some of us - me, just to piss Bob off- but we had a good time in a friend's house. I wish I had taken a picture of it, the walls had a Tudor look to them, wood beams and white plaster, But Celo specializes in gorgeous hone made weird structures popping up in the woods like fairy tale toadstools. 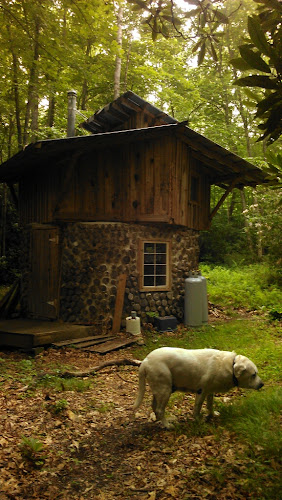 Who wouldn't want to learn music in a music shack at the Arthur Morgan School? Hogwarts has nothing on this: 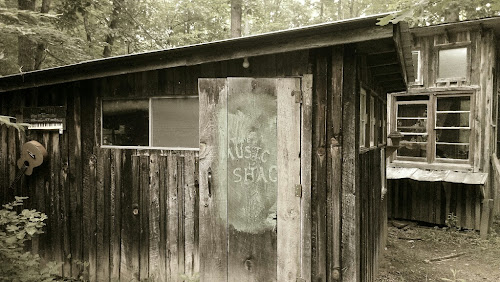 My dog loves wandering the trails in the community, criss crossed by bubbling brooks, decorated by flowering rhododendrons mixed in with smells that had her running back and forth like a puppy. Winter in July works for Cheyenne. 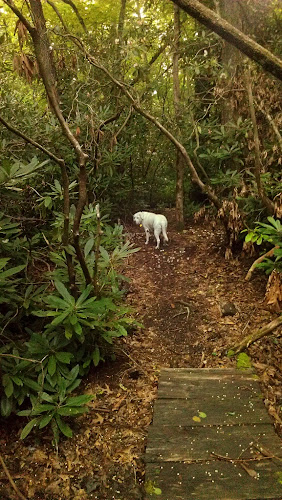 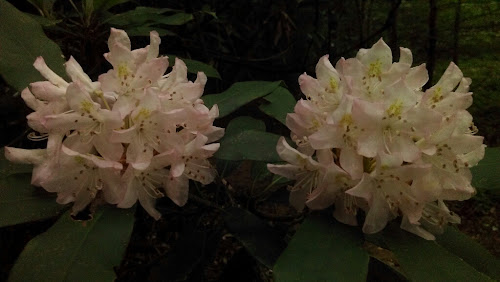 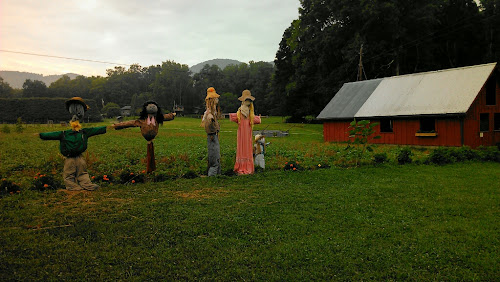 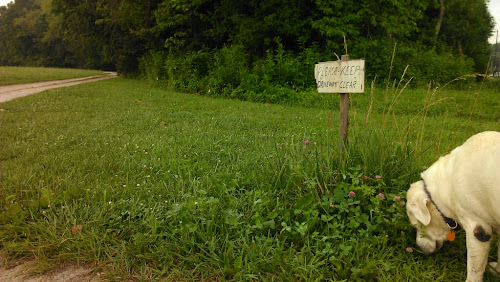 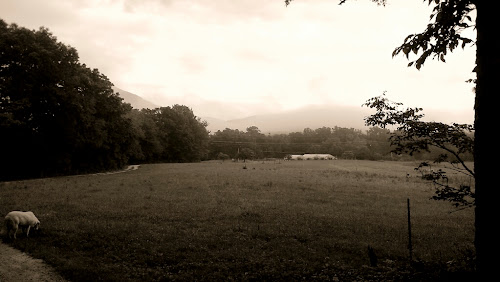 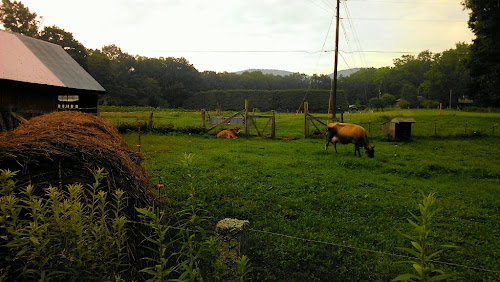 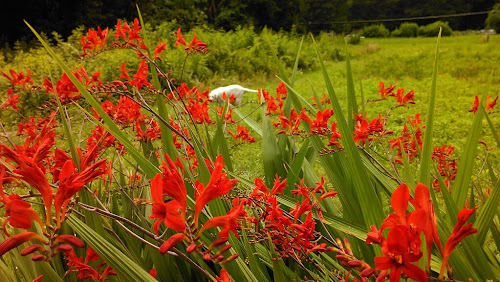 My wife learned that Nancy was volunteering to hold down the fort at the craft shop across the river, so we dropped by so the women could catch up. The craft shop is next to the food coop that serves the peculiar food needs of the community. There are a couple of normal gas stations and convenience stores up and down highway 80 which sell junk food as one does. Years ago when things were a bit more hardcore among the you gsters it was not unknown for guests to take a ride into Burnsville 15 minutes away to sneak a hamburger stop at a fast food joint. Sometimes you just have to be a carnivore. It's your nature. 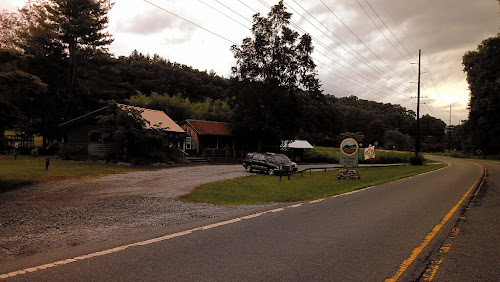 There are some pretty high quality artists living here. If you head north from the Blue Ridge Parkway on highway 80 this low key place doesn't shout it's presence but it has a collection of interesting souvenirs of this place. Sunday afternoon was quiet and Nancy the potter is also the volunteer bookkeeper. 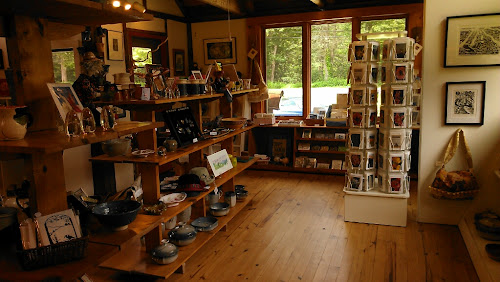 Check out her "bottom mugs" which some anonymous prudish person had carefully positioned to turn the pink buttocks inward, away from public view. My wife liberated one of the mugs which will now be mooning the Keys. 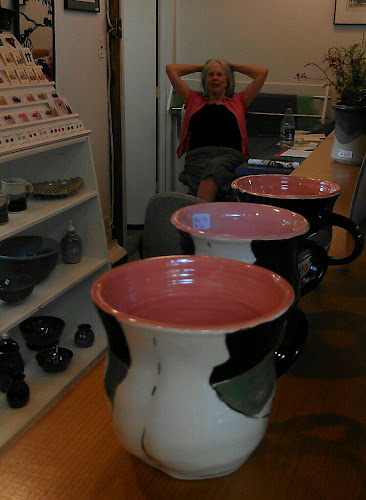 Cheyenne would have been a Labrador in a china shop. She sat happily on the deck watching the traffic rush by on highway 80. 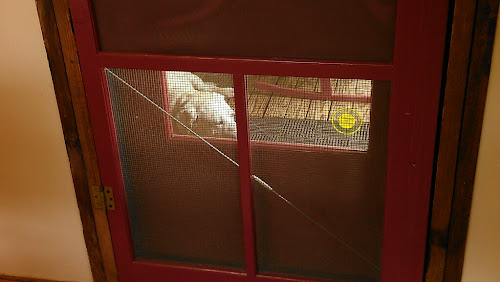 There was a small exhibit marking the 40 year history of the craft shop. The toilet is a delightful outhouse, to this day. Key West Diary: Outhouse Art my essay from 2010. 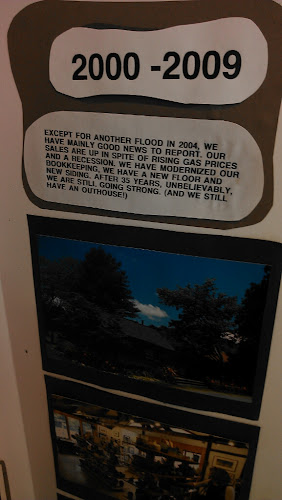 Nancy was the fourth adult from the right, the dark shadowy face framed by long dark hair. 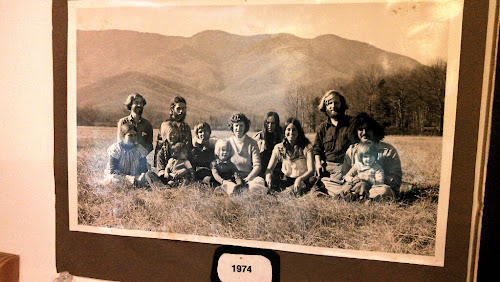 Here she is building the structure in 1974 now filled with arts and crafts: 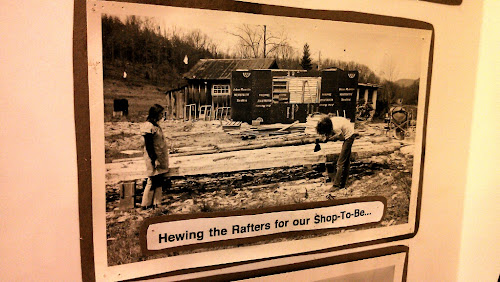 Summer is the time for outdoor gatherings. I find the constant socializing to be exhausting but it's part of the visit when you hang out in the community. Sometimes I have to beg off as I can't take it. This outing didn't start out well as Cheyenne made a spectacle of herself by borrowing a hot dog. They took it well but I couldn't very well explain that a disciplined dog works best around disciplined humans, not people who store cooked food at dog height. 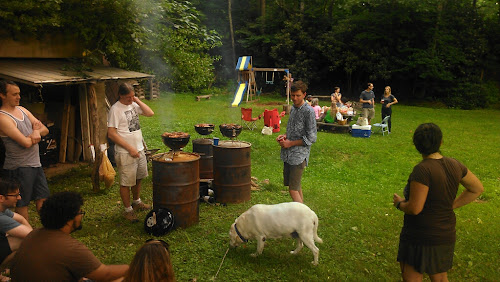 Bob and Geeta enjoying their status as the grand old couple. They used to hang with Methuselah on his rare visits to Celo way back when. 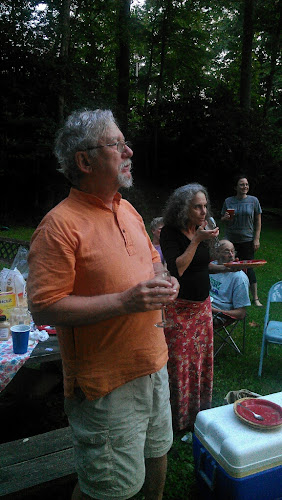 Birthday boy below celebrating 31 years and his best girl who has expressed interest in moving into Nancy's home thus promoting the generational connections so dear to the community that is Celo. Nancy was hauling ice cream for some reason. I was stuffed already with chicken, sausage, potato salad, zucchini, bean salad and I can't remember what. Garlic toast I think? 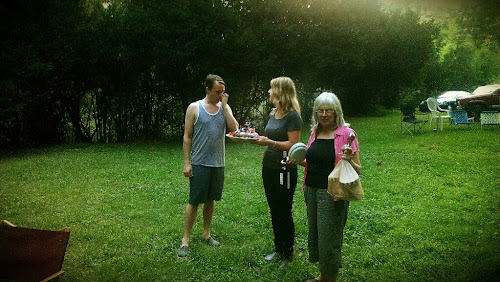 I don't know that it's right as I am but a mere occasional visitor to this place but I got a strange and unexpected feeling of nostalgia on this visit. I got a feeling of a changing of the guard, new, young, different people raising children here now. Bob sort of agreed though we never explored the notion as I might have liked to. In the big picture nothing has really changed, sure the clothes are different and the term "hippy" is more of a derogatory epithet, but Celo is still a place for couples to raise children. Mothers may no longer wear mumus and now jog in spandex with ear buds, but at heart they are just mothers, not aliens. Time has passed and the energy is that of a new generation. We baby boomers are skipping off center stage, and it's about time I suppose, but at Celo I do find myself missing the days I never knew! Such is the grasp of the place. I feel nostalgia for a time I know only from pictures and stories. Yeah, they sell a mean hot dog down the road too! I like stepping between worlds in a desperate effort to keep my feet on the ground, between the real world and Utopia. North Carolina looks pretty good for a non tropical place, but winters I can't stand.

Posted with Blogsy
Posted by Conchscooter at 12:01 PM 3 comments: