Here's a thought: it's been ten years since Wilma blew into town and flooded Key West just months after Katrina wrecked New Orleans. No one across the U.S. noticed Key West go under water as the Crescent City's drama made everyone question their survival rating. It was my second season dispatching, I was hired right before the awful 2004 summer season of constant hurricanes and a year later I was taking calls from people whose homes were collapsing and whose streets were flooding. But, unlike New Orleans Key West did not see a break down in social order. I remember bums collecting supplies floating out of Kmart and putting them up on ledges out of reach of the flood waters. People got stuck on their roofs, cars floated away, but no one drowned and vigilantes didn't strut around waving guns. It was no fun but it wasn't distopia. I felt good about Key West. From NOAA this image of North Roosevelt; Hurricane Wilma sucked: 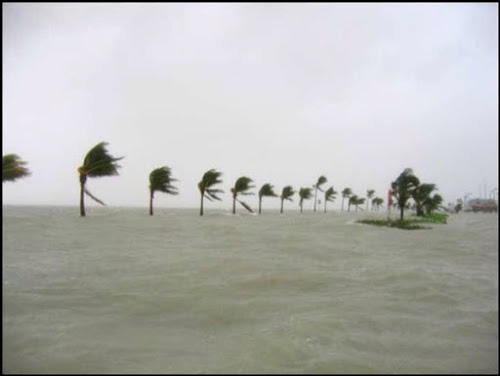 With Tropical Storm Danny churning around in the South Atlantic and predicted to become a Category Two storm before reaching the Caribbean this might be a good time to remember a great many people who live in the Keys have yet to enjoy their first hurricane experience. Key Haven wasn't spared by Wilma: 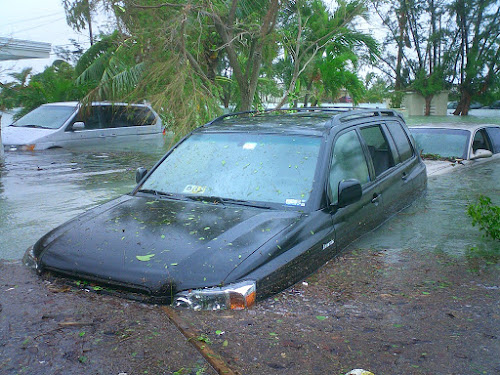 When the National Hurricane Center announced the Pacific El Niño promised us a lighter than usual season they did point out that "it only takes one." So could Tropical Storm Danny be the one? It's a bit early to say, let's face it. 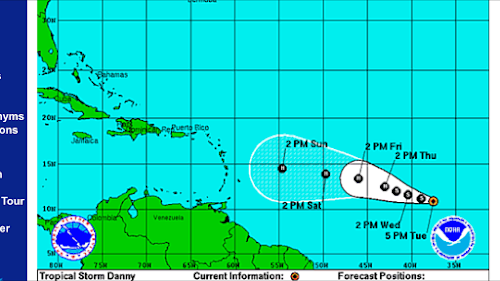 The difficulty when facing the potential approach of a storm is that everyone has an opinion and those with no experience can be led to worry or worse can be persuaded to behave with a bravado that usually evaporates when it's too late. I've sat out a dozen storms but my job requires me to stay and facing 130 mile-per-hour winds from inside the police station is one thing. My wife the teacher evacuates the minute they close the schools. She leaves with Cheyenne and a tank full of gas before last minute traffic clogs the overseas Highway. The question is: what to do and when? The old timers, real and pretend, like to pontificate and act all certain. Me? Not got a clue. Sometimes people like to measure wind speeds as though the approach of a mere Category One is nothing to worry about. Maybe, but wind speed changes on a whim. It's all very mathematical but the Saffir-Simpson scale is just an attempt to measure the nature of Nature.

The Saffir-Simpson Hurricane Wind Scale is a 1 to 5 rating based on a hurricane's sustained wind speed. This scale estimates potential property damage. Hurricanes reaching Category 3 and higher are considered major hurricanes because of their potential for significant loss of life and damage. Category 1 and 2 storms are still dangerous, however, and require preventative measures. In the western North Pacific, the term "super typhoon" is used for tropical cyclones with sustained winds exceeding 150 mph. 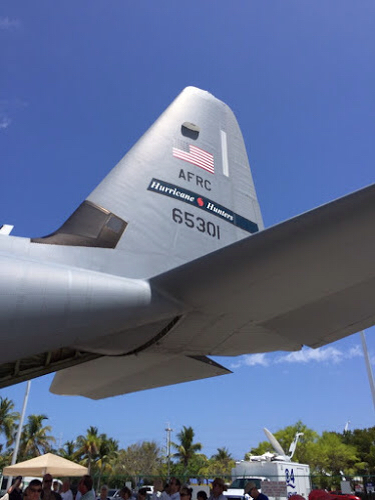 And you may care to check out The Hebert Box if you live in Florida! Good Luck!