A short walk through the fabled five villages of Italy's Ligurian Coast, in which we hike up hill and down dale for five long hours and earn a splendid lunch. Finally.

Let me say with no false modesty my wife are not alpinists we do exercise daily at home and though my wife has severely painful joints she hates yielding to her auto immune disease. So I was a little anxious when we were forced to the hill trail because the coast trail between Manarolo and Corniglia was closed. My suggestions of a train ride were brusquely swept aside so up we went.

At first we were on pavement, walking past the vast parking lots built to accommodate infernal combustion engines in this supposedly car-free land.

And soon enough we found the sole signpost to our first destination.

In Italy where signs are rare I ask directions all the time in defiance of my gender's noted proclivity for not so doing, and this day each local looked down at our unsuitable sandals and repeated the pericoloso mantra, about danger and stones and the narrow nature of the path. Oh well I said we have to earn our lunch to quizzical looks from the hardy sun burned locals. I felt we were fodder for winter stories about the foolishness of visitors.

At first the warnings seemed exaggerated with a steep trail of neatly fitted stone steps leading smoothly up hill through the olive groves neatly marked with blazes which we would find all the way except for a couple of uncertain spots where we cursed the Club Alpinistico Italiano's carelessness.

The sun was getting hotter and the climb seemed endless. My wife asked about the hammocks strung between trees and I told her my own horror stories of picking olives in freezing winter winds on ladders with baskets on Umbrian hillsides. Nowadays they drape nets under the trees and drop the olives into them, and they use machines to shake the fruit loose where they can, certainly not on these steep hillside wherevmanual labor is encouraged by Government subsidies to cover the unreasonable costs of vertical agriculture. The nets spend the idle summers rolled up like sausages.

As we trudged up the endless steps I wove fantasies in my head of a superb bar at the top equipped with waiters In starched white shirts with endless cups of espresso and superb views from a shady terrace table. The reality was rather different as we neared the top and met other groups of walkers.

It seism as eccentric as this sounds, does not believe in bars. There was nowhere to buy an espresso, never mind waiters in attached dickies on sunlit shady terraces. Well bugger me.

I staggered into the inconvenience store (alimentari) and bought the largest available bottle of water, where the Germans and Swedes bought thimble sized bottles and I remarked ruefully to the clerk it seemed I had the biggest thirst. We sat on the steps and watched the better organized parties stumble around looking lost in the warren of alleys.

I translated for them eventually as they trailed back and forth and the local said the wine tasting room they wanted was on the main road halfway down the hill. That was the last time for a while my wife and I felt better about our orienteering skills. We paused at the church (Madonna Della Salute) Our Lady of Good Health- ha!

And eventually tore ourselves away from the park benches. It was early in the season for the grapes that produce an unpronounceable heavy sweet white wine in the Fall.

And on these hillsides the locals use a weird monorail to harvest them. It is very steep out here.

We saw a couple of "trucks" parked for the off season.

Imagine riding these rails straight down the hills:

Hard to believe isn't it? They do have teeth on the underside for the drive wheels to grip...But that's a lot of faith in human engineering.

Most of the labor is still done on foot, hauling and spraying and picking and pruning...

For us pansy amateurs it was just a brisk walk in the sun.

- Posted using BlogPress from my iPad
Posted by Conchscooter at 4:02 PM No comments: Links to this post 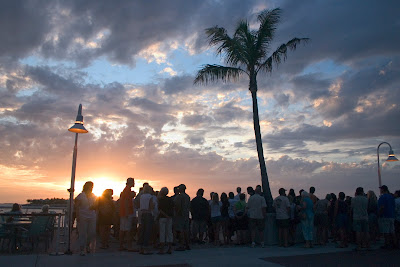 Sunset Adoration by GarytheTourist.
Posted by Conchscooter at 4:01 PM No comments: Links to this post 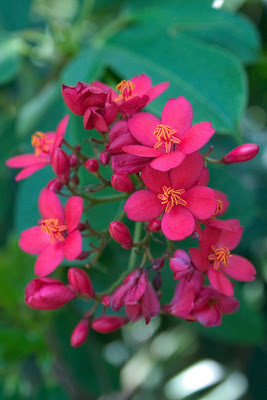 By GarytheTourist, loaning me his pictures to use this month while I'm on a vacation.
Conchscooter.
Posted by Conchscooter at 8:01 AM No comments: Links to this post

"We're lucky we picked a trail with only a light grade, according to the ratings of the C.A.I.- the Italian Alpine Club" I remarked to my wife as we stood high among the terraced vines of this super crowded tourist attraction in Liguria, overlooking the Mediterranean.

My wife was picking her way along a narrow trail winding along the edge of the terrace and with her head for heights she was concentrating more on where to put her hands and feet than on the inanities muttered by her husband.

With one day to spend in these fishing villages turned super expensive Eco resorts we were of course nowhere near the sea and instead were acting the preposterous middle aged mountain goats in unsuitable footwear among hordes of super keen Teutonic and Scandinavian alpinists.

All dressed to the nines, pack-equipped for the direst emergencies and very serious. The views even for us slow moving goofs were spectacular.

We had planned to spend two nights in the Big City of La Spezia (the spice) where we took a room and dumped our crap and parked the car and set off early the next day by train for the five little villages perched on supposedly inaccessible hillsides. They sell a ten Euro ($15) day pass for all trails and railway rides and we managed to buy all that and show up on platform one in time for the 7:55 to Riomaggiore.

Which claimed it was one minute overdue but arrived at our destination ten minutes late after transiting more tunnels than open rails. Being late wasn't a problem...the whole journey takes eight whole minutes.

And there we were in perfect loveliness.

It was an ideal sunny day for a gentle amble, the air was fresh and a strong sea breeze, which was to blow all day was dusting the first coastal trail of our planned series of waterfront walks with the smell of the sea in our nostrils. Some pleasant strolls, a splendid lunch and an easy train ride out was our plan which went horribly wrong as all my plans tend to do. It started out well, though.

The first town of the five in the land of five villages, Riomaggiore is the start of the most famous Path of Love, but the whole village was deserted at that ungodly hour except for a small dog that posed like a cat. Nothing matches up to appearances in the Cinque Terre (Five Lands).

The walk was easy along a paved trail with walls and handrails and lots of keen vacationing Italian joggers running and shattering the peace of the morning with their breathless inanities.

Lovers are supposed to lock in their love, an unlikely prospect in these divorce happy times with a padlock left behind to disfigure the countryside. Thousands oblige. I don't think the Pope encourages poofs to express their love publicly so they probably go to hell if their lock in their vices, such is our lack of fondness for our differently abled neighbors.

Less touristically inclined vandals leave graffiti everywhere, on walls of course but even on plants...

After twenty minutes on this dangerous trail (pericoloso the sign warned- they had no idea what was next on our agenda and neither had we) we arrived in
Manarolo.

A charming little village, our second favorite we decided at the end of the day, which was where I stood around gasping and nearly got run down.

A blue van like the one above appeared out of nowhere and careened to a stop making me feel like one of those moron visitors on Duval who cross the street into traffic against the red light. But...? I thought there was no road access to these lost villages? Think again cretin! Then we got our next surprise when we found out the coast trail to Corniglia was closed. We'll take the hill trail my wife said. Are you sure I asked dubiously. Which was the wrong thing to do as my wife crippled by rheumatoid arthritis never allows her illness to limit her life. Fuck off she said. So we did.

Up Hill. And that was the easy part.

-posted by Blog Press on my iPad. If you use an iPad you need Blog Press. It's fantastically simple for computer inert persons like myself.

Posted by Conchscooter at 3:59 AM No comments: Links to this post 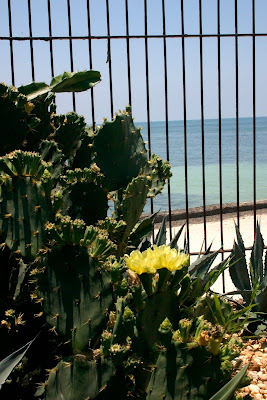 Key West Garden Club by GarytheTourist.
Posted by Conchscooter at 12:01 AM No comments: Links to this post