I went to bed early exhausted by my bizarre alarm clock driven lifestyle and then, as the Gods had chosen to use me as the butt for their own inscrutable joke, they woke me up at a decidedly ungodly hour. I had nowhere to go on a Sunday morning while it was still dark and there I was off work for the weekend, and totally irretrievably conscious so I did the only thing a man can do when lying awake at 3:48am staring at the black space where the ceiling should be, thinking about the inscrutable ways of Fate. I took my dog for a walk. 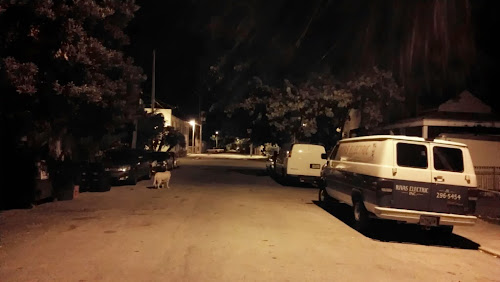 Cheyenne was utterly delighted, after she had shaken herself into full consciousness and was able to appreciate the fact that I was awake and not leaving her behind for once. Such joy could only be rewarded one way. 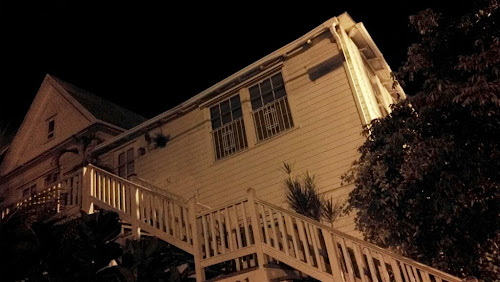 I took her to Key West, her favorite place to walk and I opened te car door and she hopped out and was lost to me. I put her collar on her, took the leash and my phone/camera and a couple of plastic bags and by the time all that was assembled she was breaking loose toward Truman Avenue. No scent was safe from her enquiring nose. 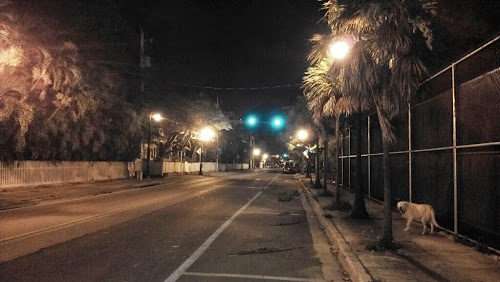 Let's face it, it was no great hardship to be out in Key West under a pitch black sky, warm air cooled by a gentle breeze that just won't stop blowing this perfect August. There was hardly anyone around now that the bars had closed, forced to close by the four am deadline imposed by the city. The drunks had gone home the workers hadn't got up and it was me and my dog and the odd unlit bicycle and occasional buzzy scooter on the streets. It was all terribly un-respectable being on the streets at that hour. 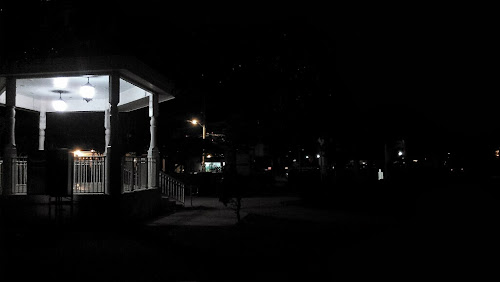 That being the case we got off the street and I trailed my Labrador into the urban jungle that is Bayview Park. And there I found a monument I hadn't previously noticed. Why? I don't know why I walked past it. Perhaps I had seen it before and not noticed it. Here it is, and I found it interesting because it was dedicated to those who served in Vietnam. And below was the name of one who died in Operation Desert Storm. The poignancy of all this struck home especially hard at a time when yet another overseas war is in the offing as our leaders have now decided that Syria is worth dying for. I didn't believe the Domino Theory then and I don't believe it now. I guess Halliburton is just feeling the pinch with all these Federal cut backs. So off to war we go. Every time. 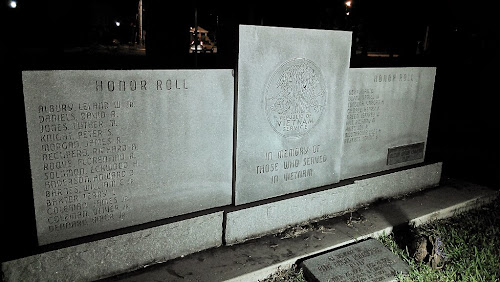 The joy of walking Key West is to be in a place where nothing is as one expects when walking an American city, crooked houses, narrow lanes and droopy foliage. And then we come across mainstream condos. Weird huh? Pelican Landing has always appealed to me in a funny way, perhaps as a reminder how most people live. I appreciate modern conveniences but I do find modern architecture to be soulless or at least driven to seek eccentricity as a motif for modern buildings. The condo blocks that line Garrison Bight along Eisenhower Drive do a good job of expressing nothing very much. They look out of place here but such structures, and much larger versions line all Florida's coasts. 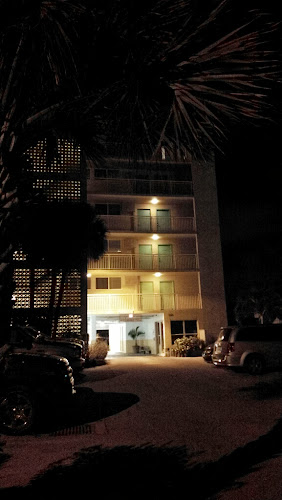 I always wanted to live in a condo but my wife warned me off them saying my personality wouldn't do well with an owner's association. She's probably right so the fact that they aren't right for me makes we wonder... The perversity of being human. 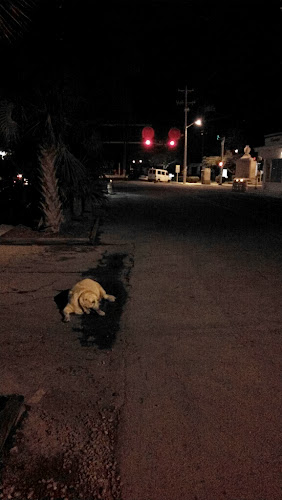 See, this is the Key West they think of: 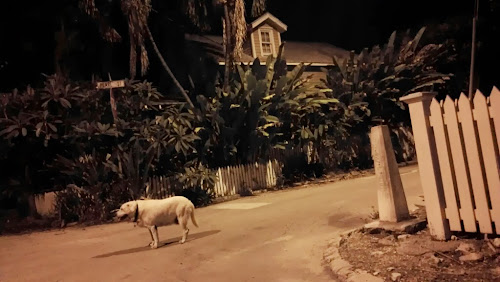 Or this, also nicely kept up: 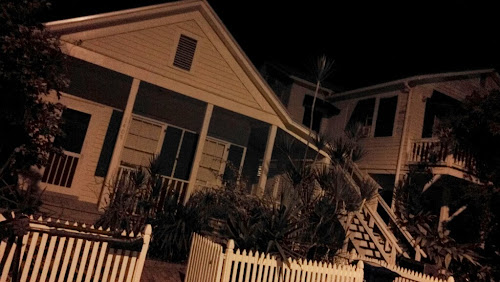 I see pictures but Cheyenne smells smells. It takes a lot out of her running around in the August heat. And it's not that hot at that hour. 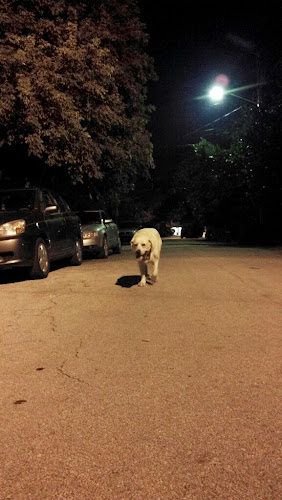 We were heading back to the car which we left on Olivia just off White Street and as we ambled along, side by side I heard the sound of a cat purring. Cheyenne heard nothing and kept stumping along. I couldn't believe the cat, it was loud! It was so loud I wondered if it was a piece of jammed machinery, an air conditioner compressor that couldn't compress... or something. I wondered what kind of cat it was, mostly they try to make no noise at all when Cheyenne hoves into view, not purring wildly like a steam engine. I had to investigate. I was a little tentative because I wasn't sure what the hell kind of cat I might have found behind the parked car. It turned out, to my astonishment it wasn't a cat at all. I don't usually shoot pictures with the flash but it was pitch black so I turned on the flash and fired away. This was what I got: 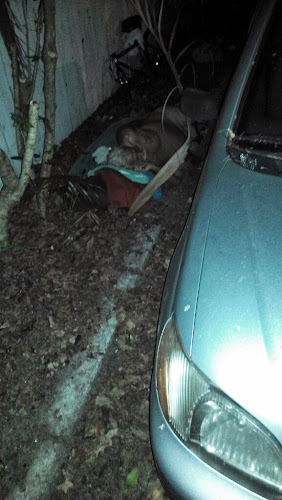 He never even stirred. It wasn't a great picture so I thought about moving in closer for a better view. However on reflection I figured getting a close up shot of a naked sadhu in all his penile glory probably wasn't to anyone's advantage. I left him to his noisy slumbers, gray head propped on his bag and a dried palm frond strategically covering his nether regions. To take our minds off the foregoing let's read a few uplifting bumper stickers. 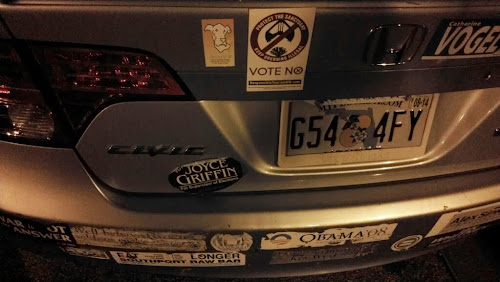 The next picture puts me in mind of the movie CrissCross (1992 film) - Wikipedia, the free encyclopedia, which if you've seen it you'll maybe know what I mean...

We left the city behind and drove as rapidly as was legal, home to breakfast and then bed for a nap. It was a good morning, perhaps the Gods knew what they were doing when they woke me up, in the dark and set me on the path of pleasing my dog.