I have long been an early riser, partly because of work and partly also because I enjoy being up early while the world sleeps but these days I am loathe to get out of bed at all. I took the photo below at ten in the morning on Friday, our last morning at the winery harvest host shortly after we got out of bed. 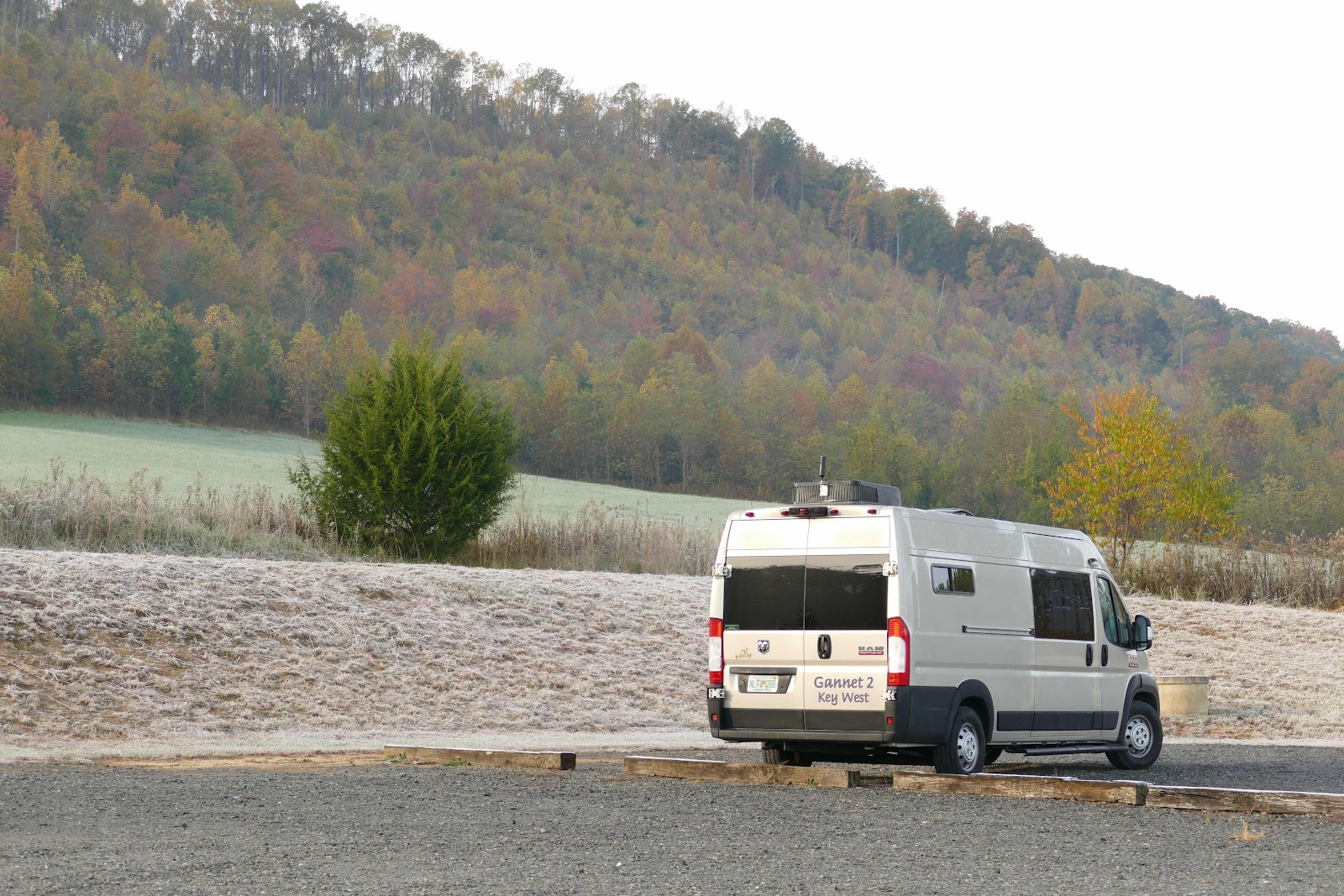 We ran the engine for fifteen minutes until the interior of the van was warm enough to feel like a sauna and then got dressed and I ventured out with the ever impatient hound. Our machinery said it was 28 degrees, four degrees below freezing and the coldest we had ever had the van in, so it was all new. 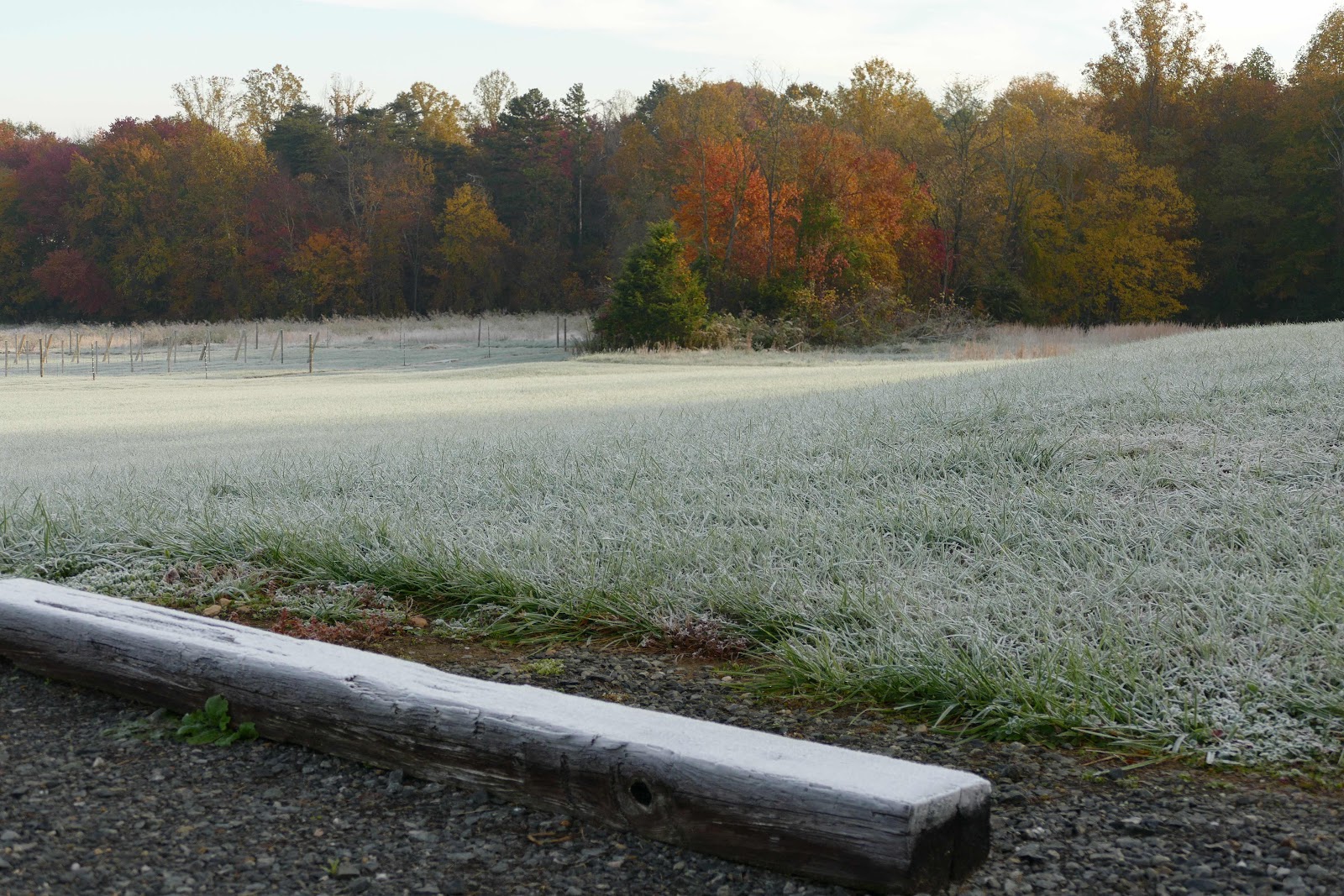 It was new for Rusty too, who seemed utterly unfazed by the temperature or the crispy white grass. I will say he is just like us and is utterly disinclined to get up early on these cold mornings. He stays curled up on a corner of our bed snoring happily and apparently not the least bit cold. I have tried to put a blanket over him and he gives me a pained look before shaking it off. I guess despite his south Florida upbringing he is a wild dog all the way, any climate anywhere. 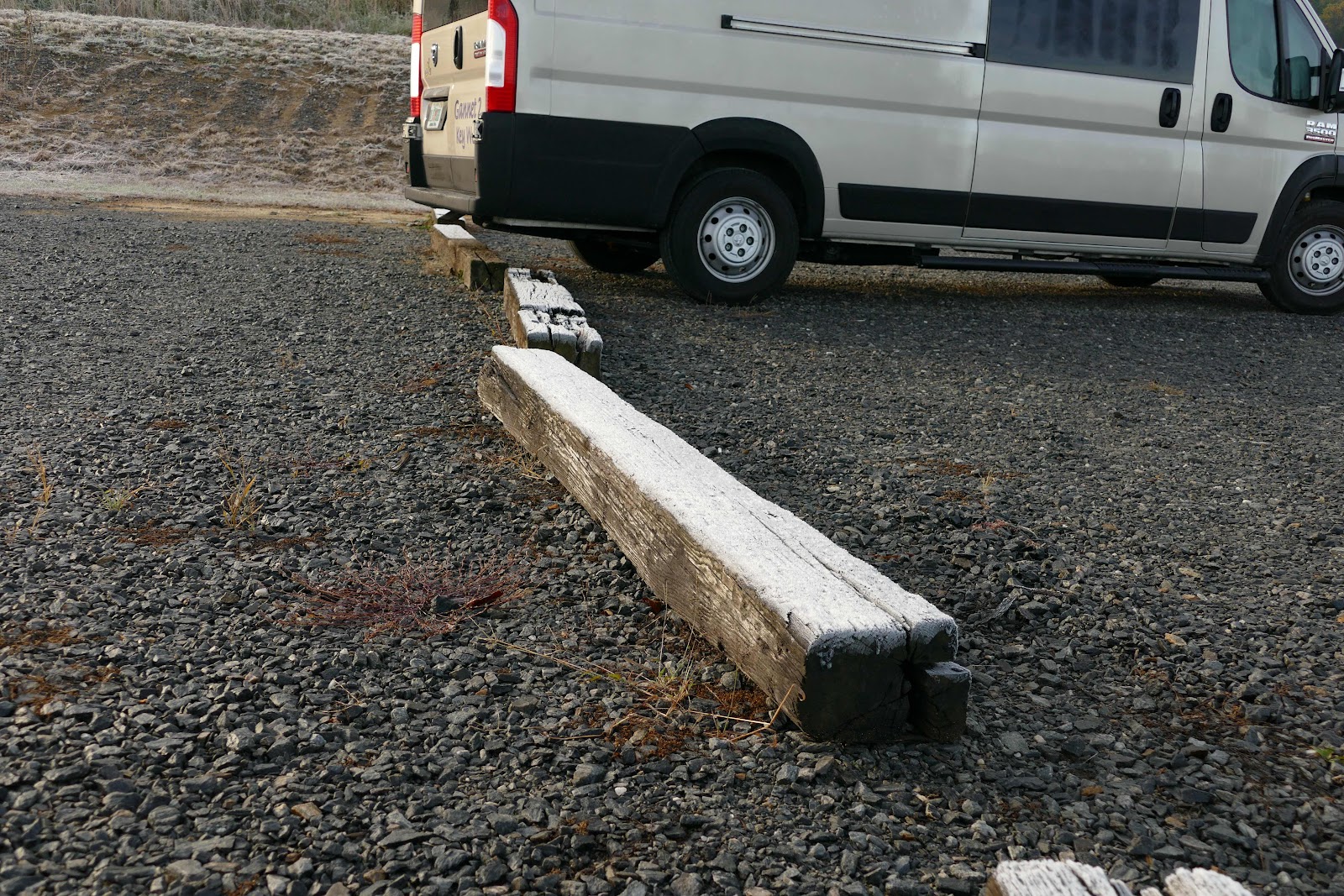 We walked for a while and I made some pictures because, let's face it, this is the new and different world I left the Keys to see and photograph. My dog walking through white stuff. 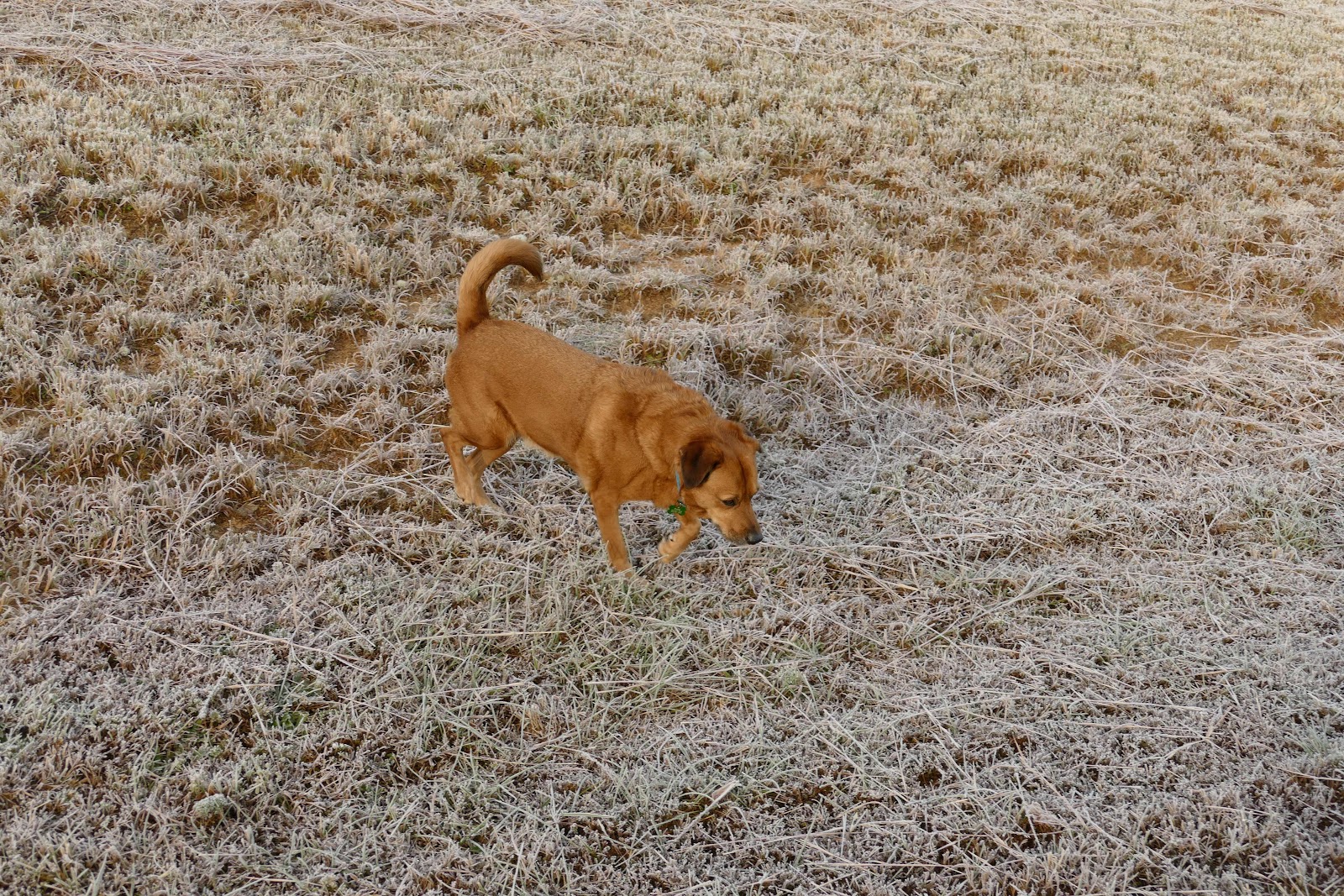 Just another morning hunt for interesting smells for the Carolina Dog in the family. Apparently this non breed of arcane American bloodline lives in the wilds of South Carolina and I have no idea how cold the wild packs of Carolina Dogs have to survive but my dog was quite happy to sit out on the gravel and watch the late morning develop. 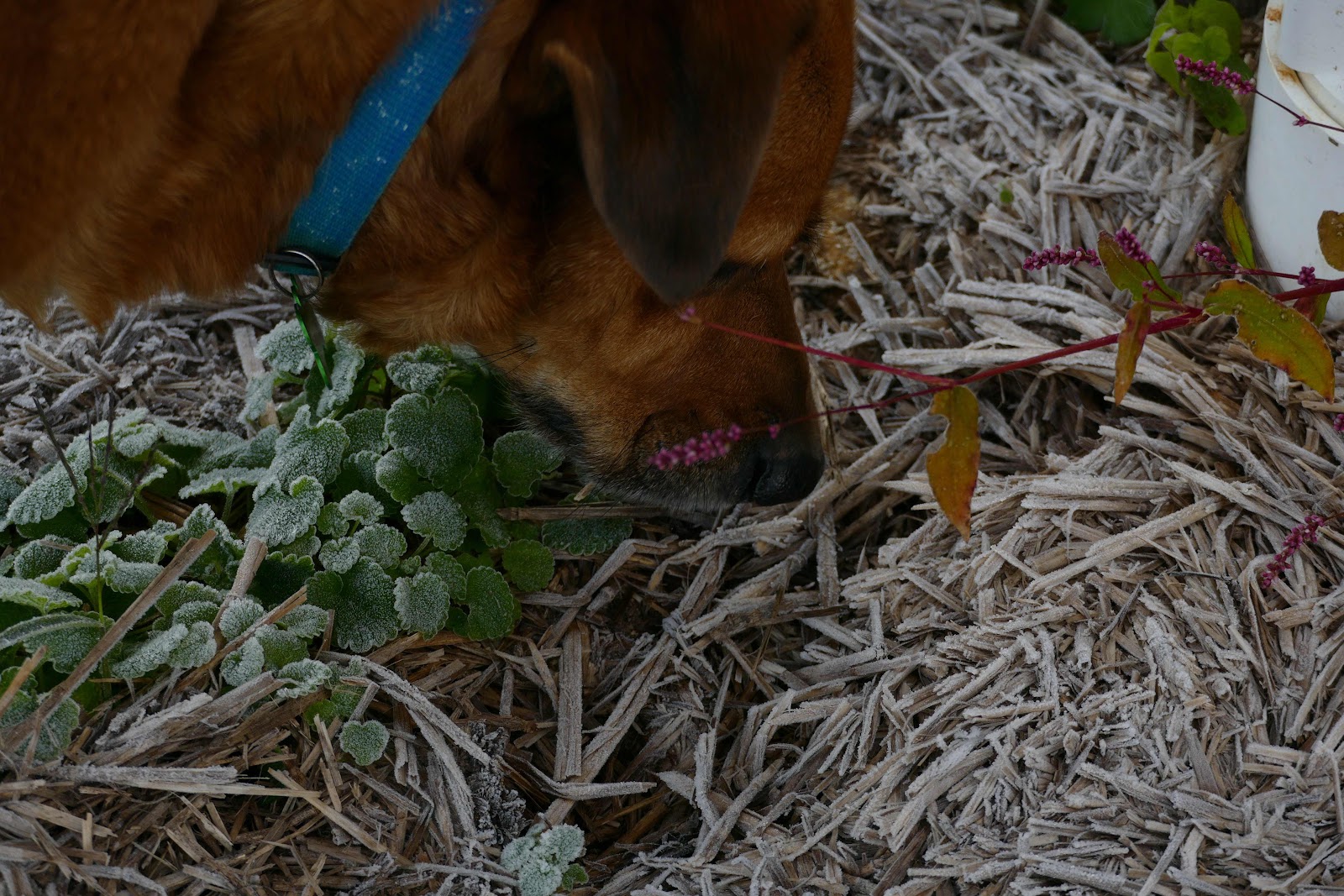 He looked at home in the woods above the winery but don't be fooled. He prowled around a short bit and decided he wasn't interested and preferred breakfast among humans. 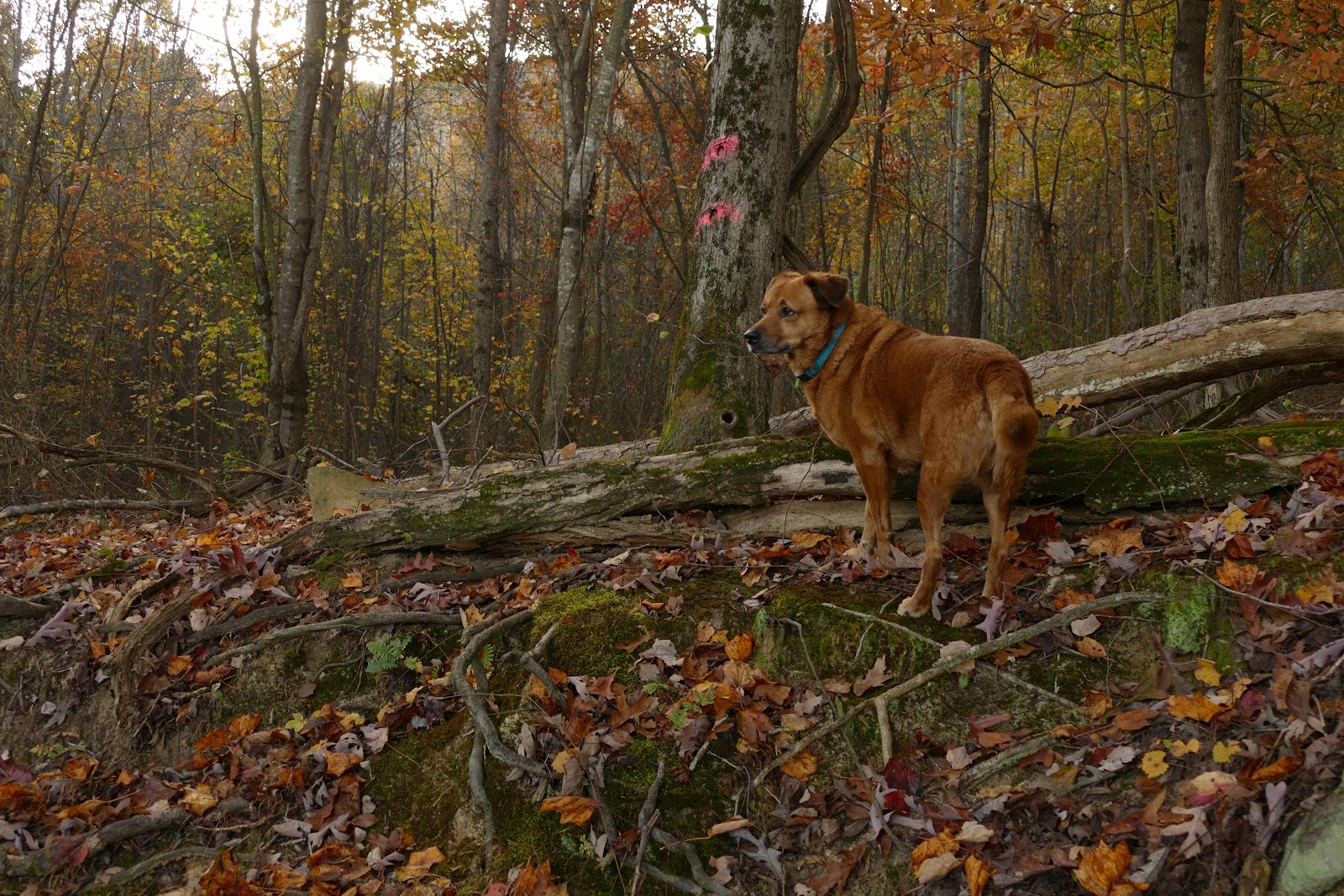 I had my tea, Layne had her chai, Rusty had his chicken strip and then we left the winery, Midnight Magdalena in Yadkin Valley. 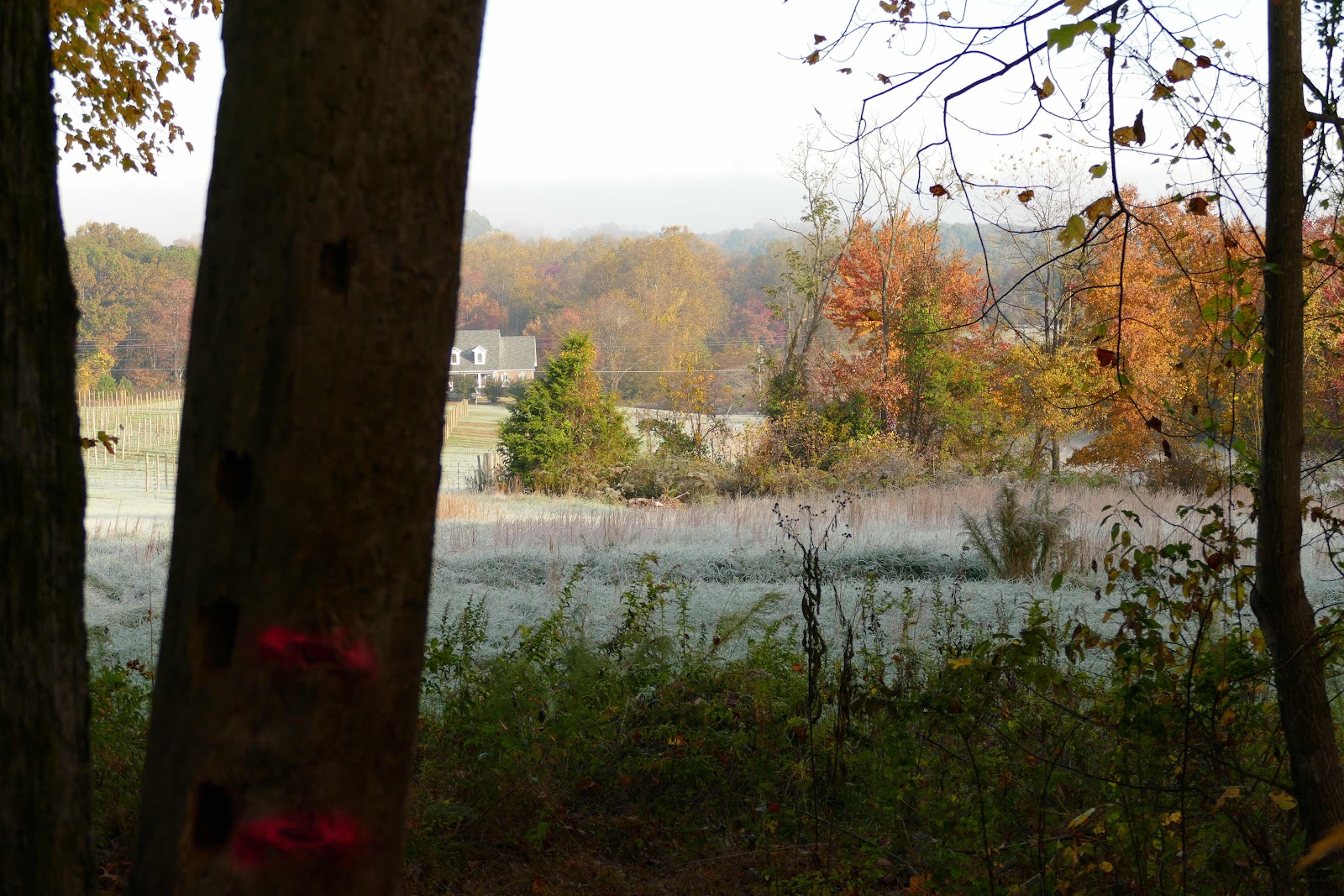 I drove Layne into Jonesville and dropped her off at her sister's Hampton Inn where she went to the gym. Rusty and I had other plans. 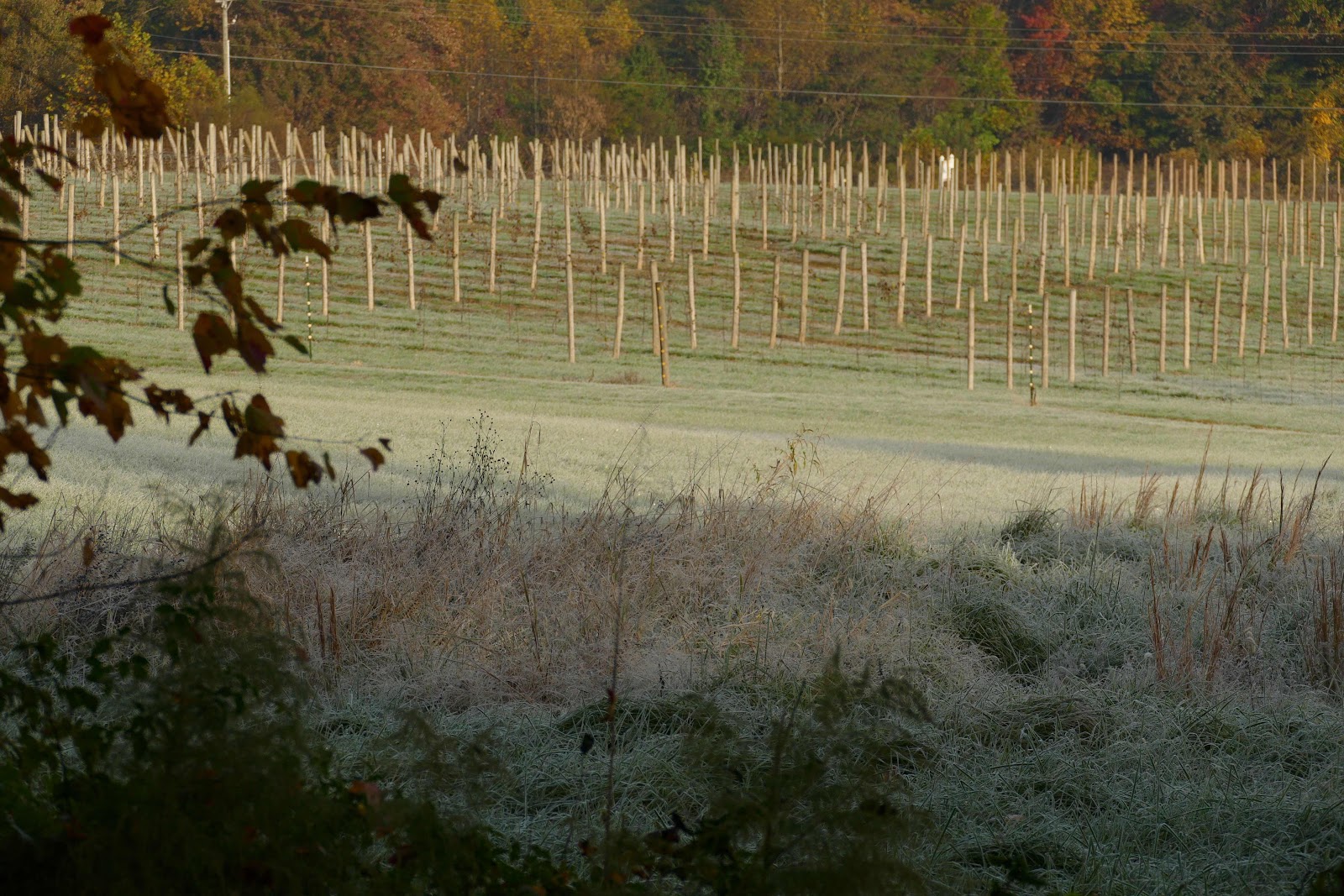 We went to Elkin, a pretty little town next door to Jonesville where I planned to walk Rusty through downtown but as I drove across the bridge toward the urban area I saw evocative mists rising off the waters and a sign pointing to a riverside park. Oh well, change of plans: let’s go there instead! 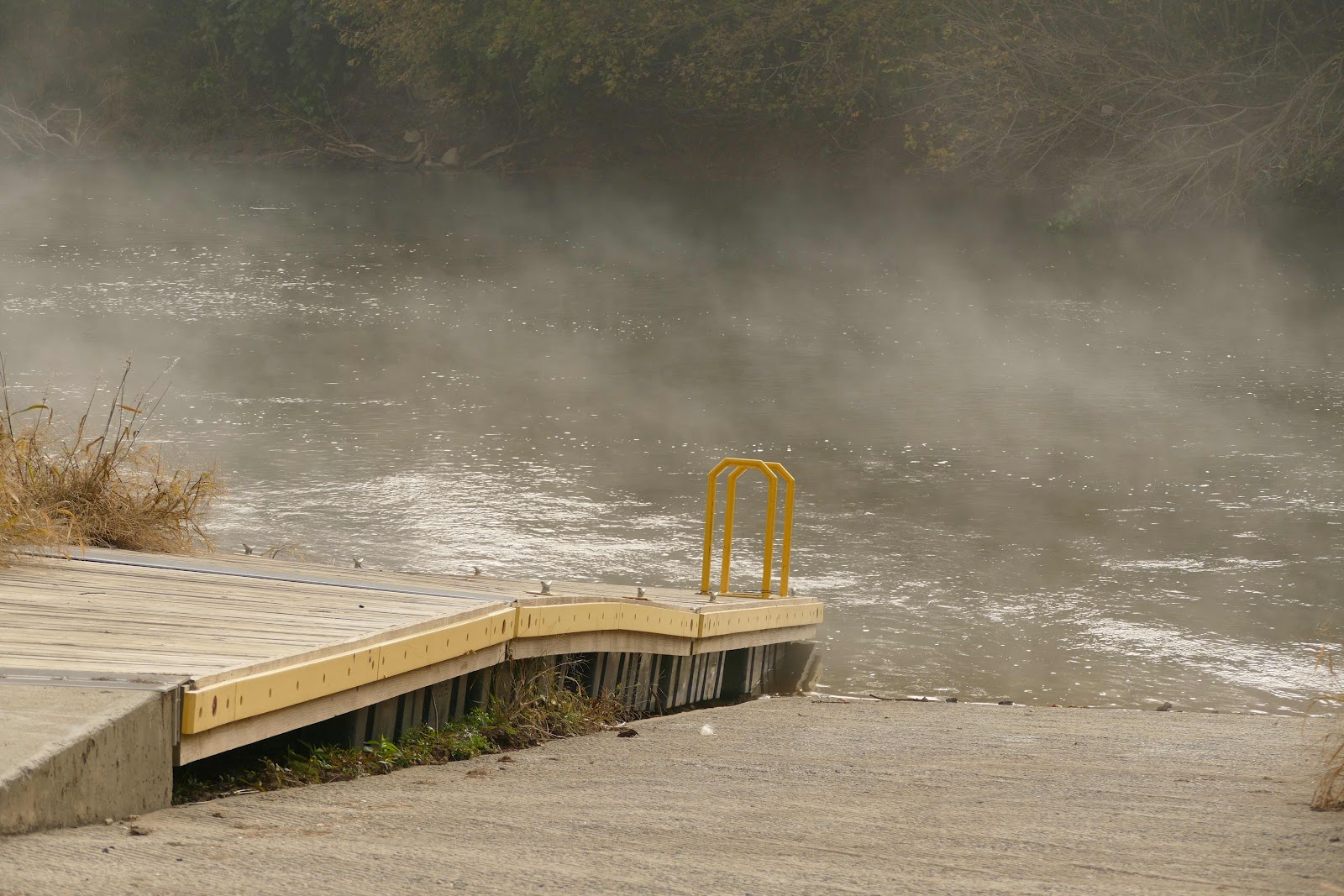 The park was of course empty at that hour on a weekday in the cold crisp winter sun. I am of the opinion that winter travel in the eastern states may be cold but public spaces sure are under populated, a compensation of sorts. the grassy area below is designated a tent camping area, one night only and as far as I could tell it's free. Pretty decent of the town, and the business district is but a five minute walk away. 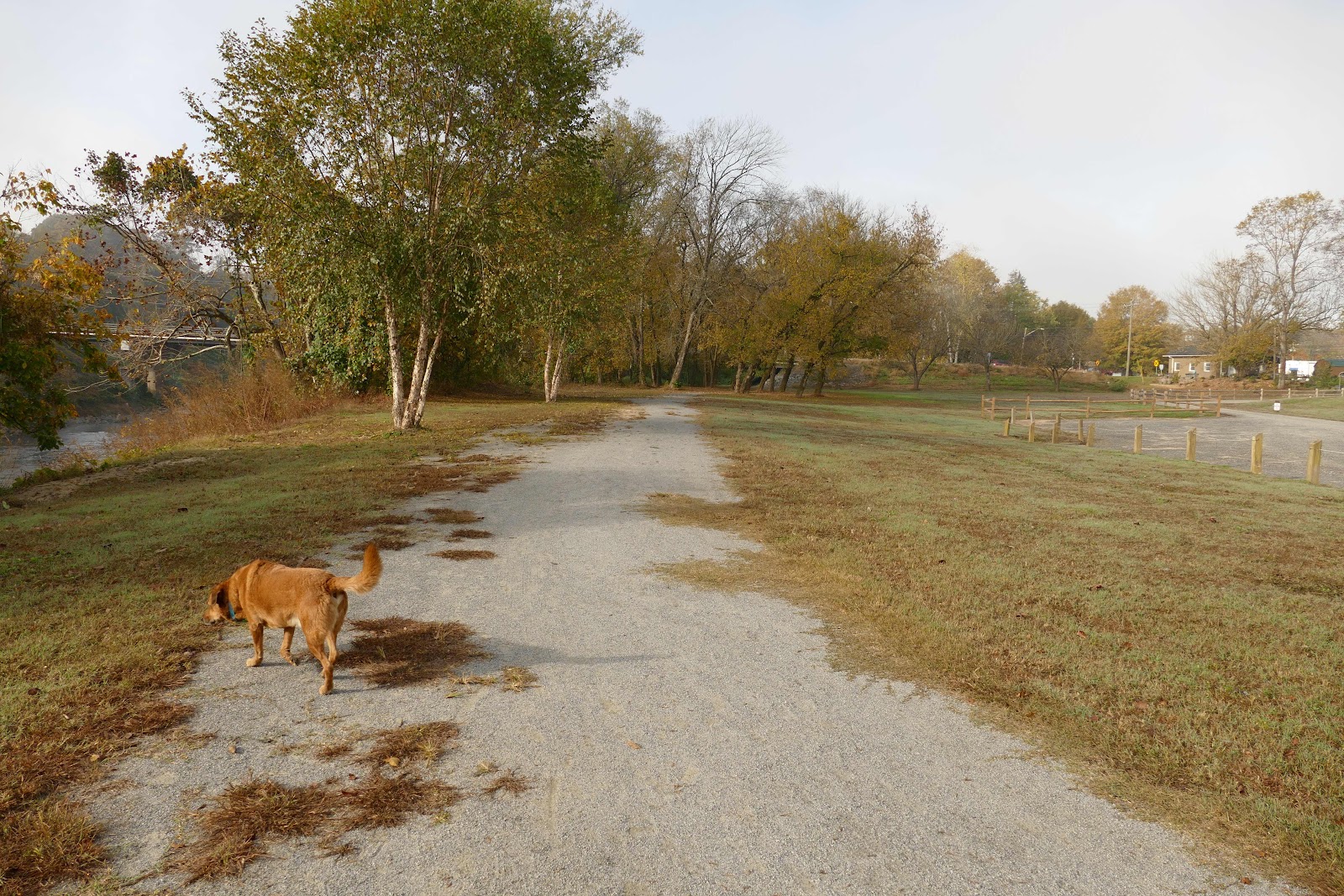 The Main Street was my original destination because we had visited it briefly the night before while getting dinner from Southern on Main, a restaurant with a deserved stellar reputation. However the park the next morning  kept us away from Main Street by daylight. 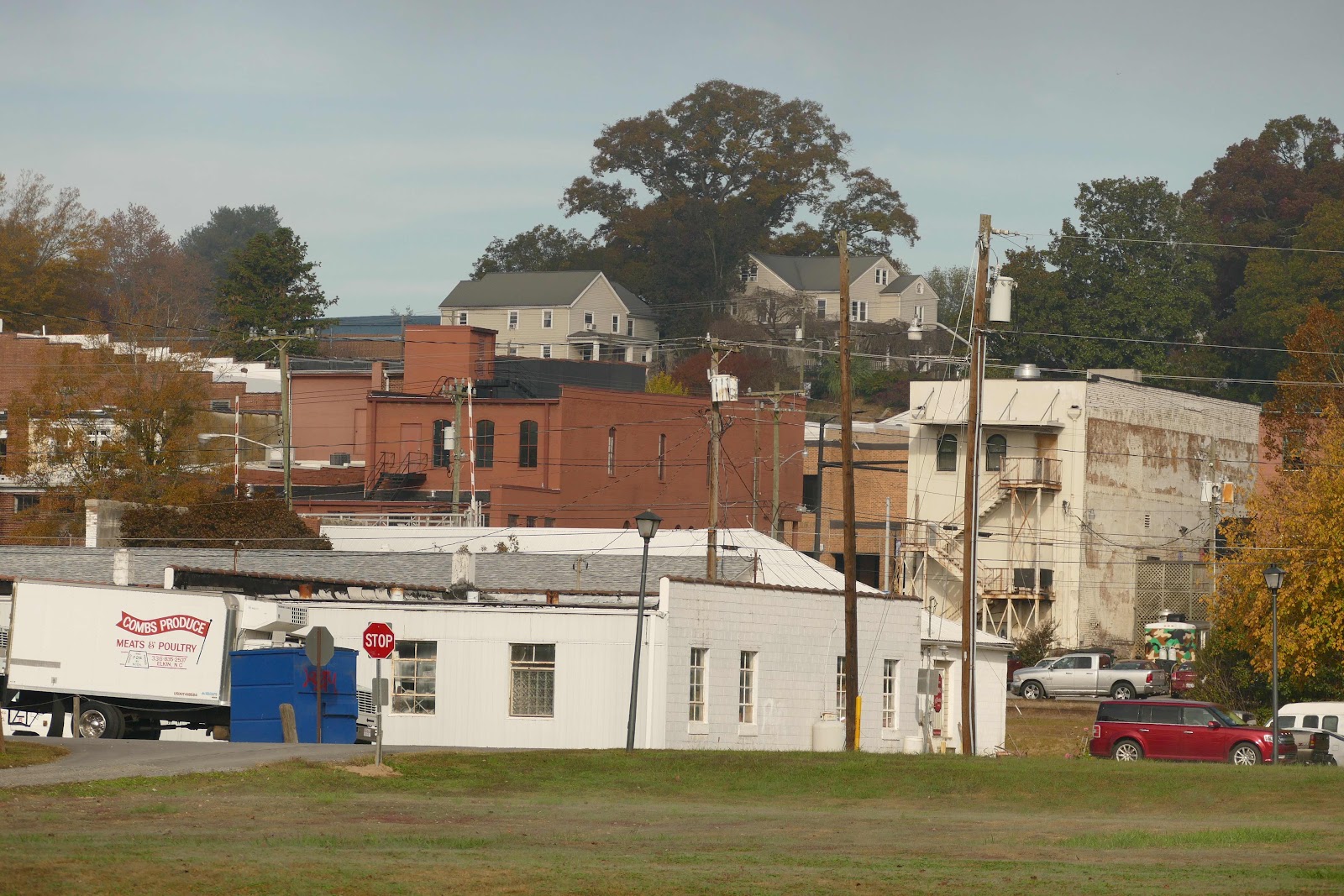 I drove with brother-in-law Bob in their Prius to get dinner which Layne and I were paying for in Elkin. I told Bob to get the food and handed him an American Express and just in case a Visa card, if they didn't take AmEx. They did and two large dinners cost just $33 which was amazing for someone from Key West. Beat that Square Grouper! 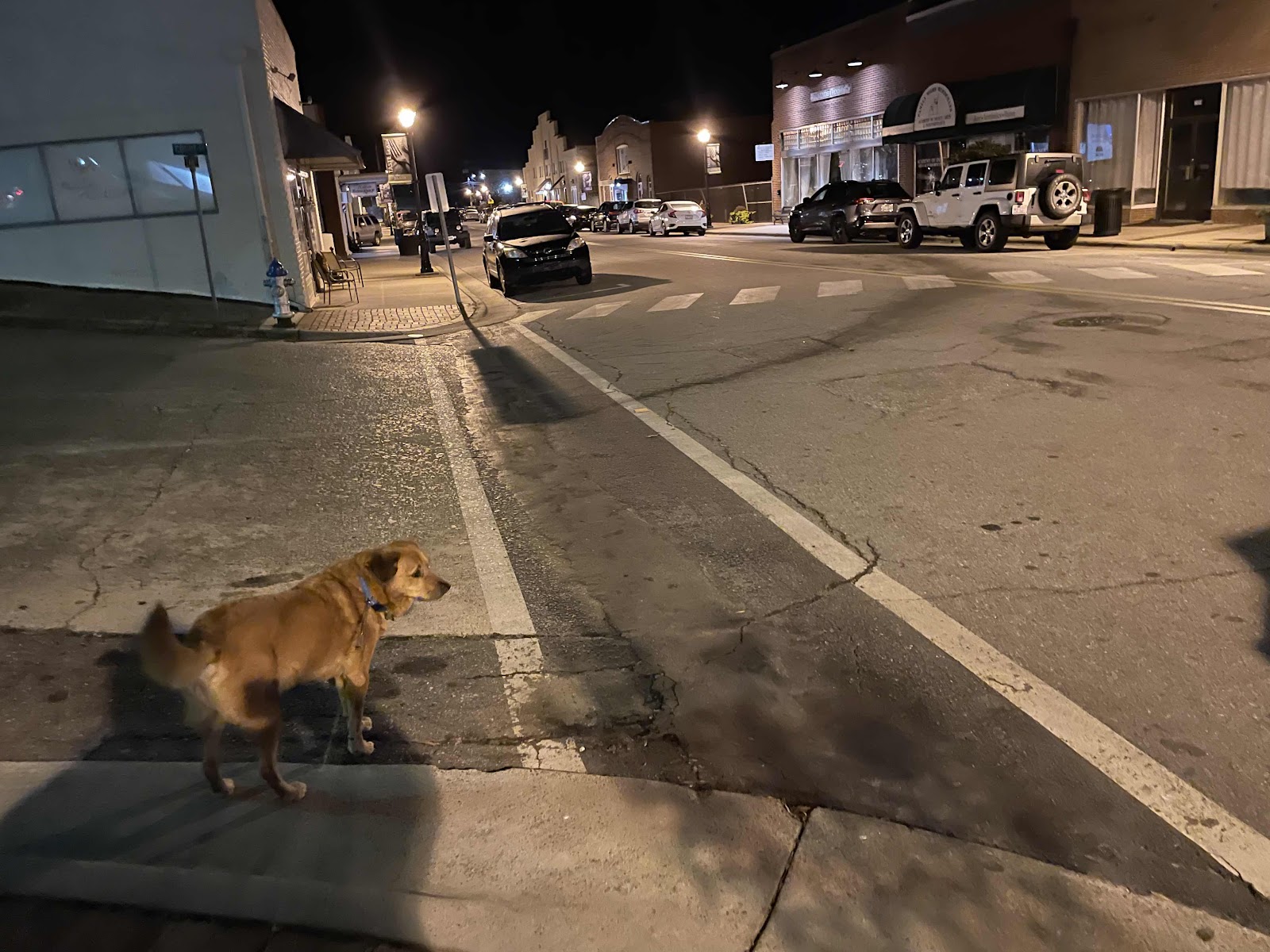 The problem I later discovered was that by removing two cards from the holder on the back of my phone when I used the phone as a camera the remaining two cards were so loose as to slip out onto the sidewalk roughly where Rusty is standing in the picture above...I didn't notice at the time. My First State Bank debit card and my driver license with my new mailing address were left lying on the ground nearly an hour I'd say. 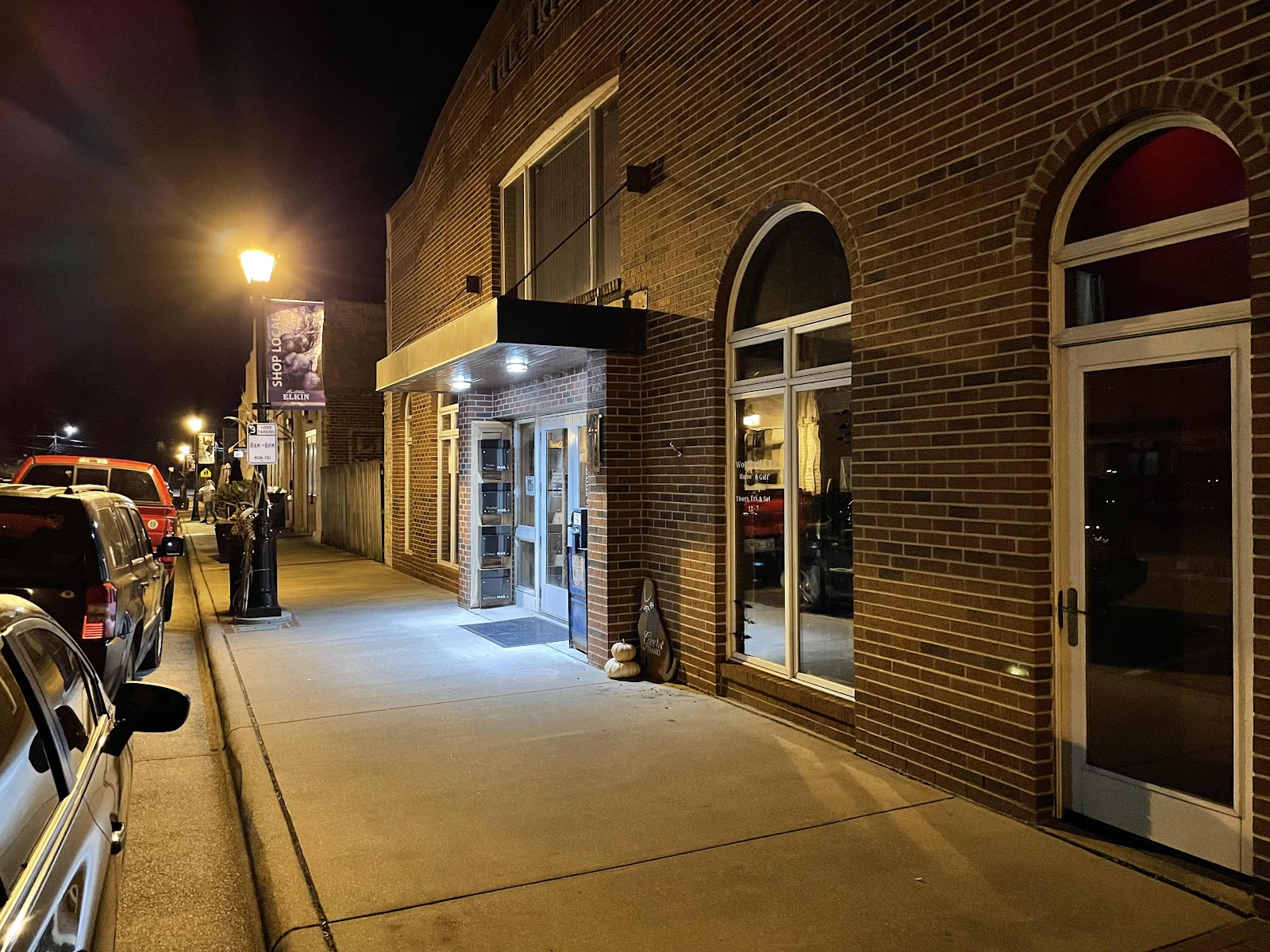 Anyway Rusty and I went on our merry unaware way and enjoyed this very pretty very quiet (Thank God!) town and I snapped a few quick frozen pictures. The old Tribune newspaper building above. 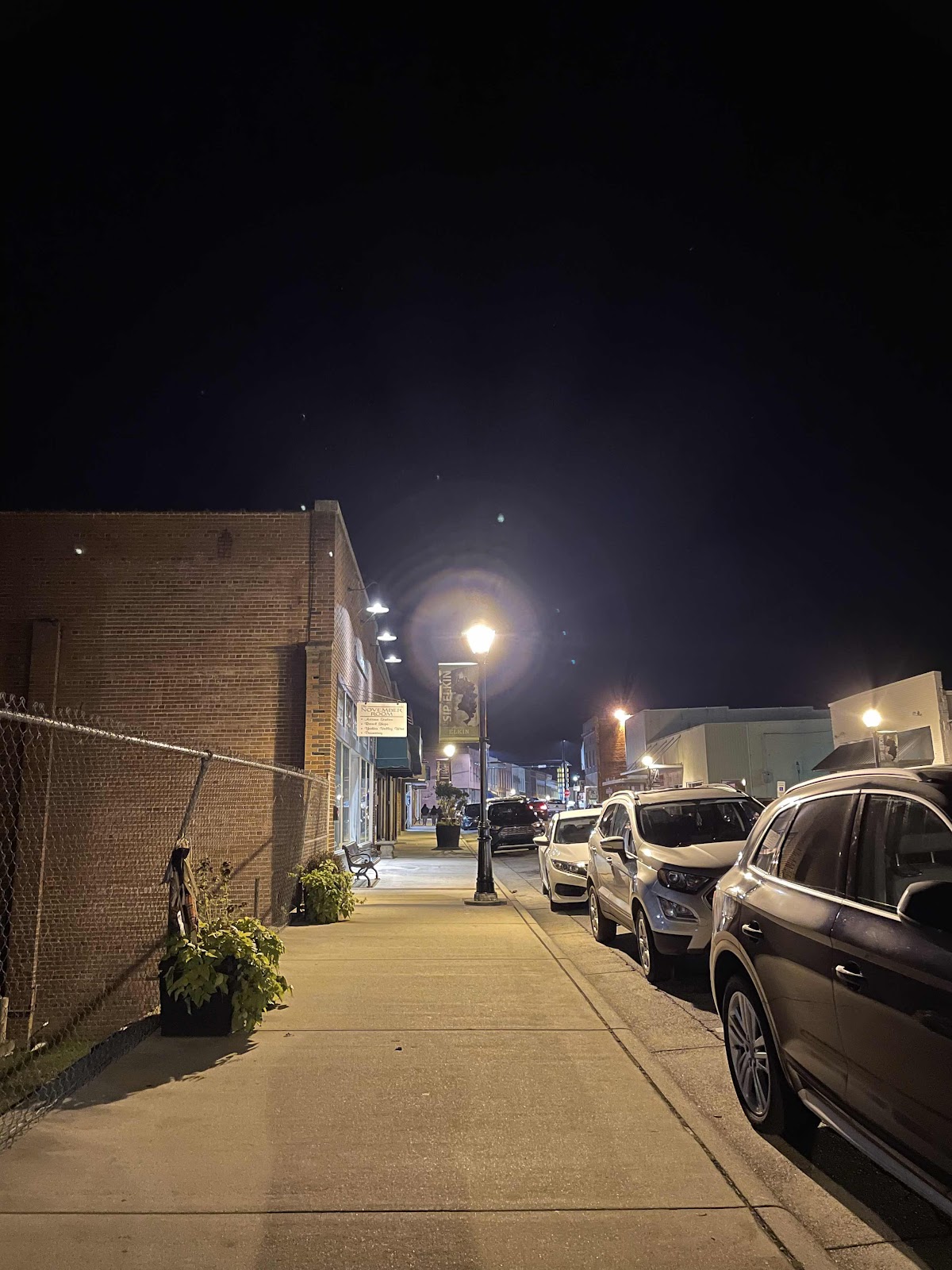 On we went enjoying the cool night air and left over Halloween decorations. 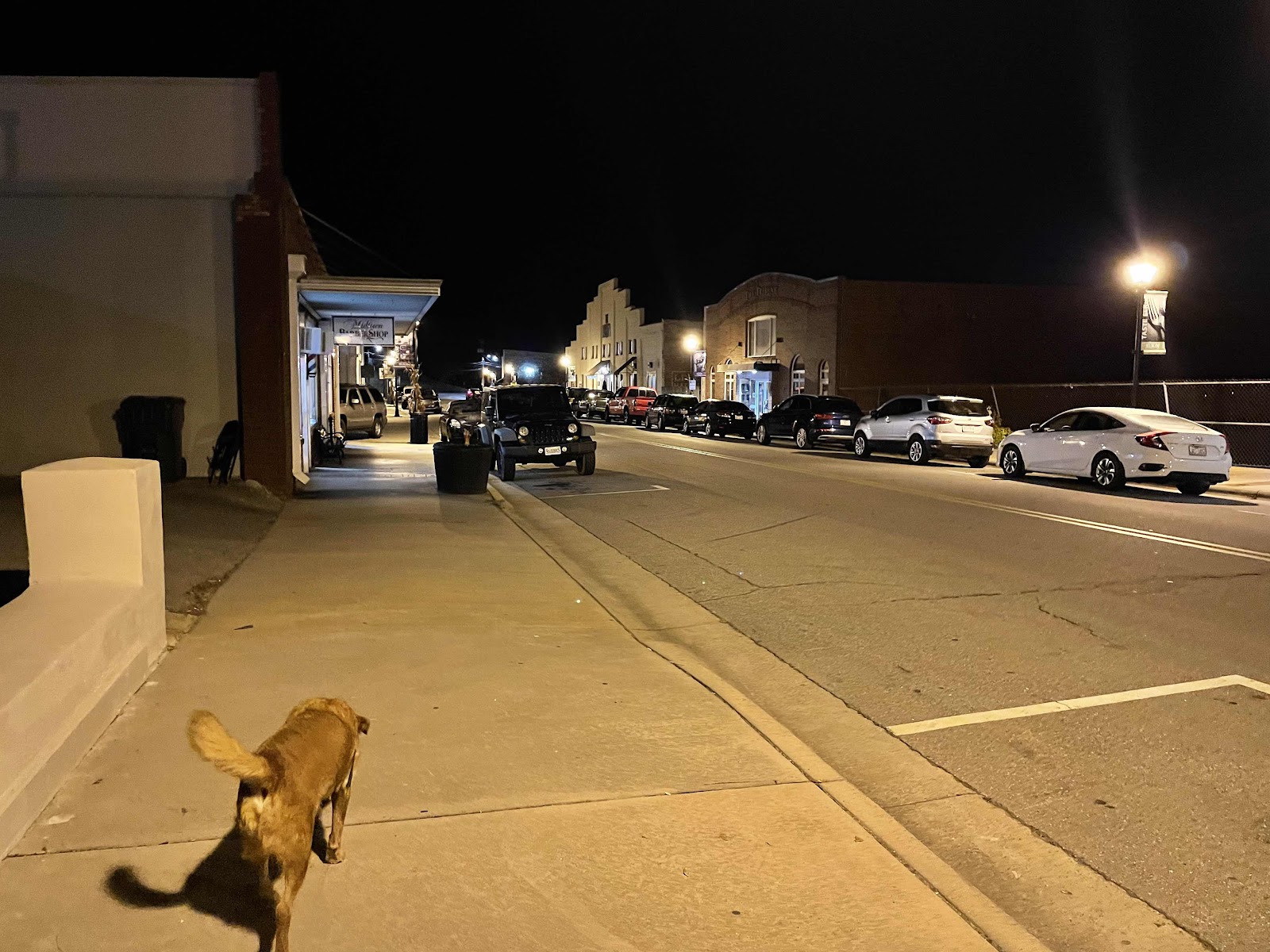 I like Elkin a great deal one way and another and of my photographs are a bit scattered I can only blame my frigid fingers for a less than decent job of capturing the old fashioned and beautifully kept downtown. 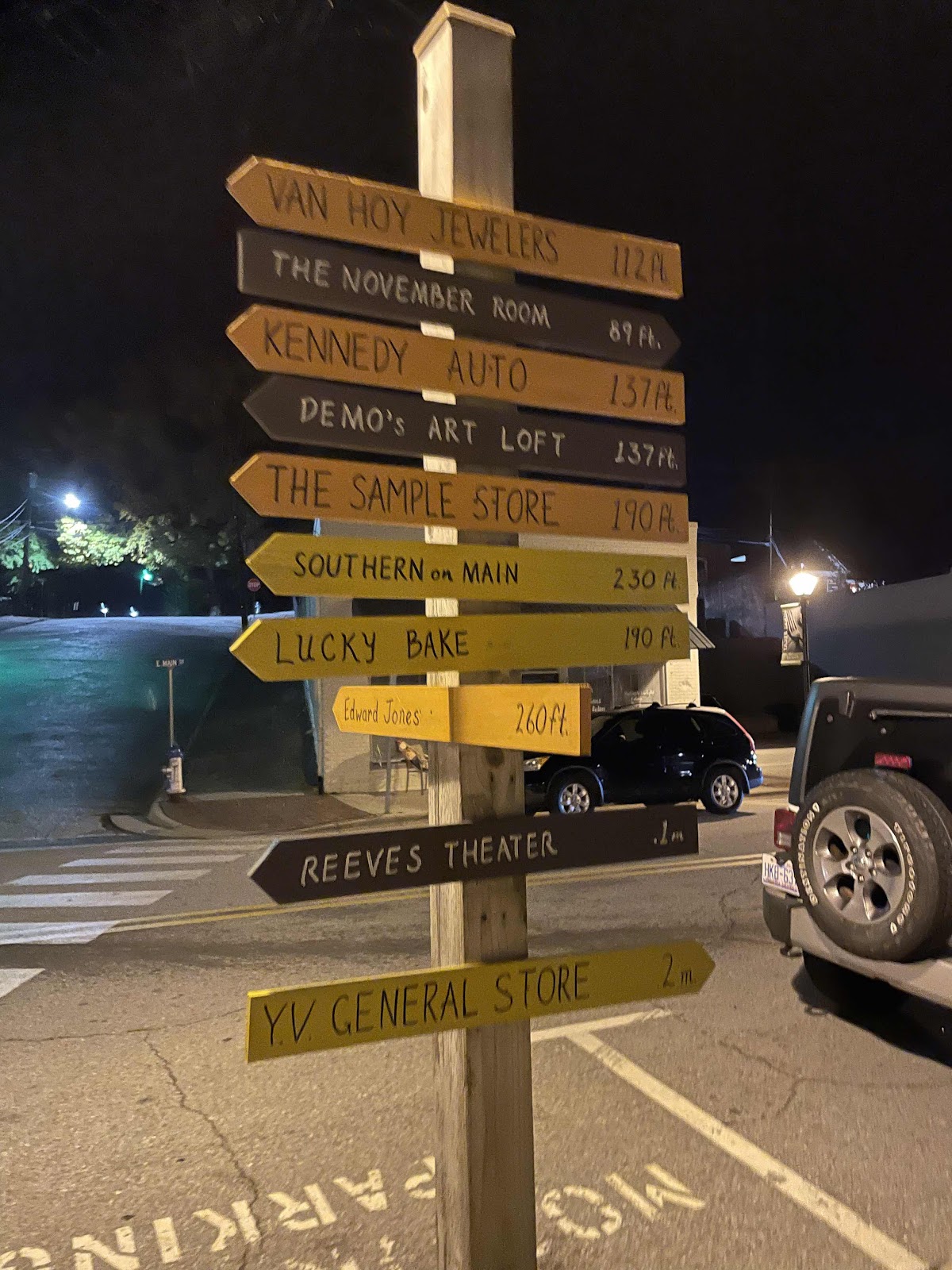 Small town America, I want to get my medications here not at a chain: 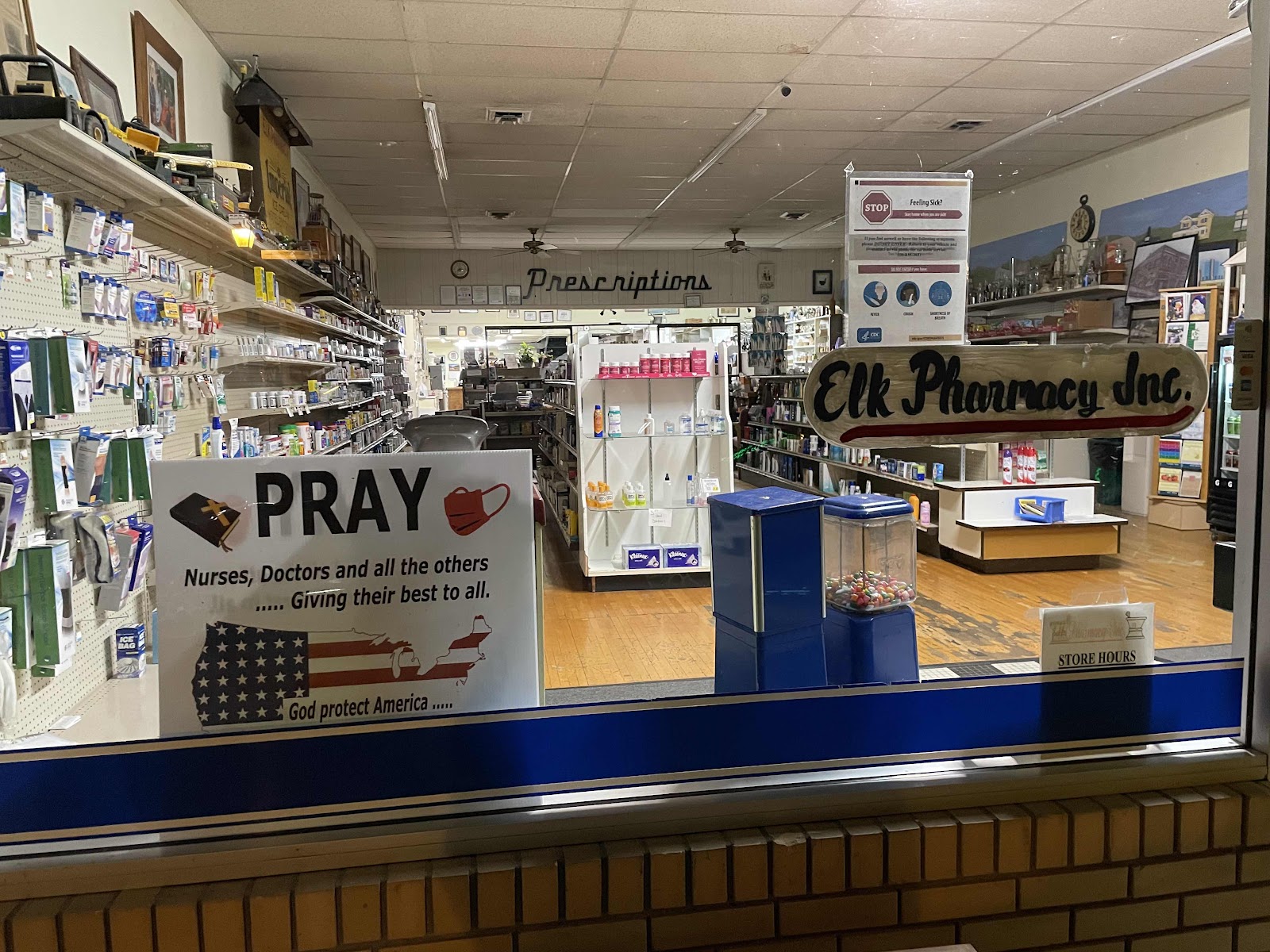 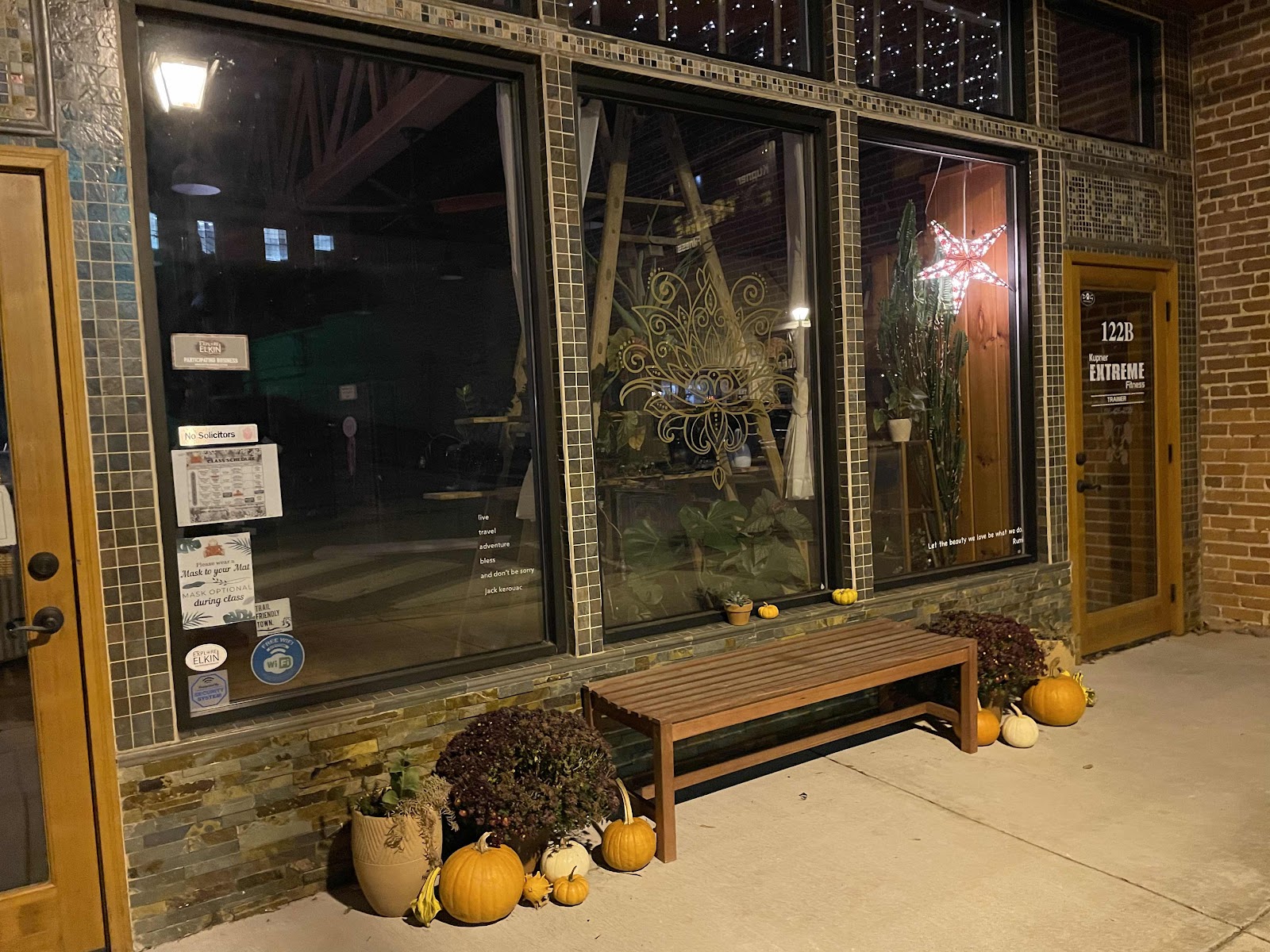 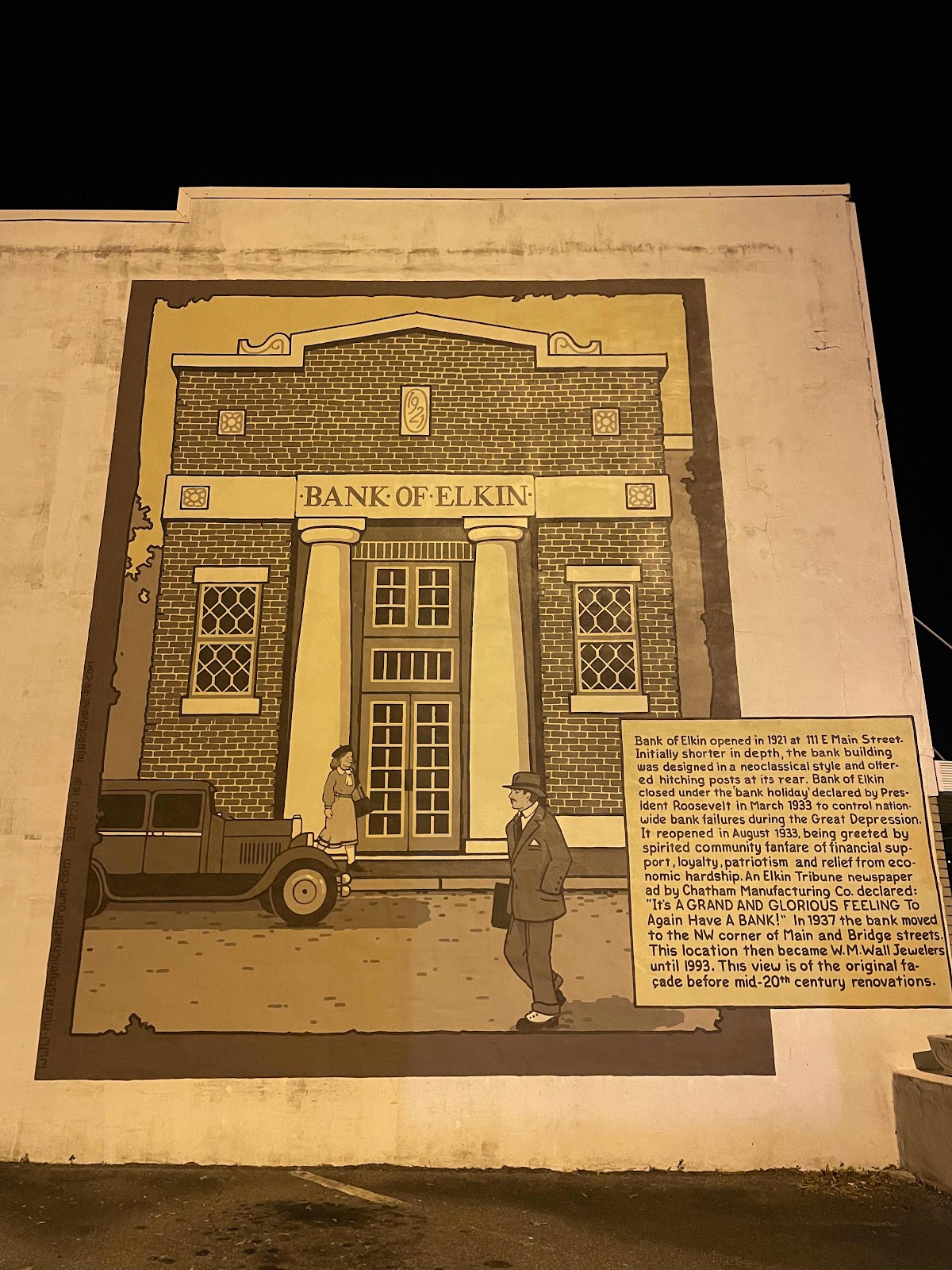 Bob the Bandit hauling away our crab bisque and fried trout and all the rest of it: 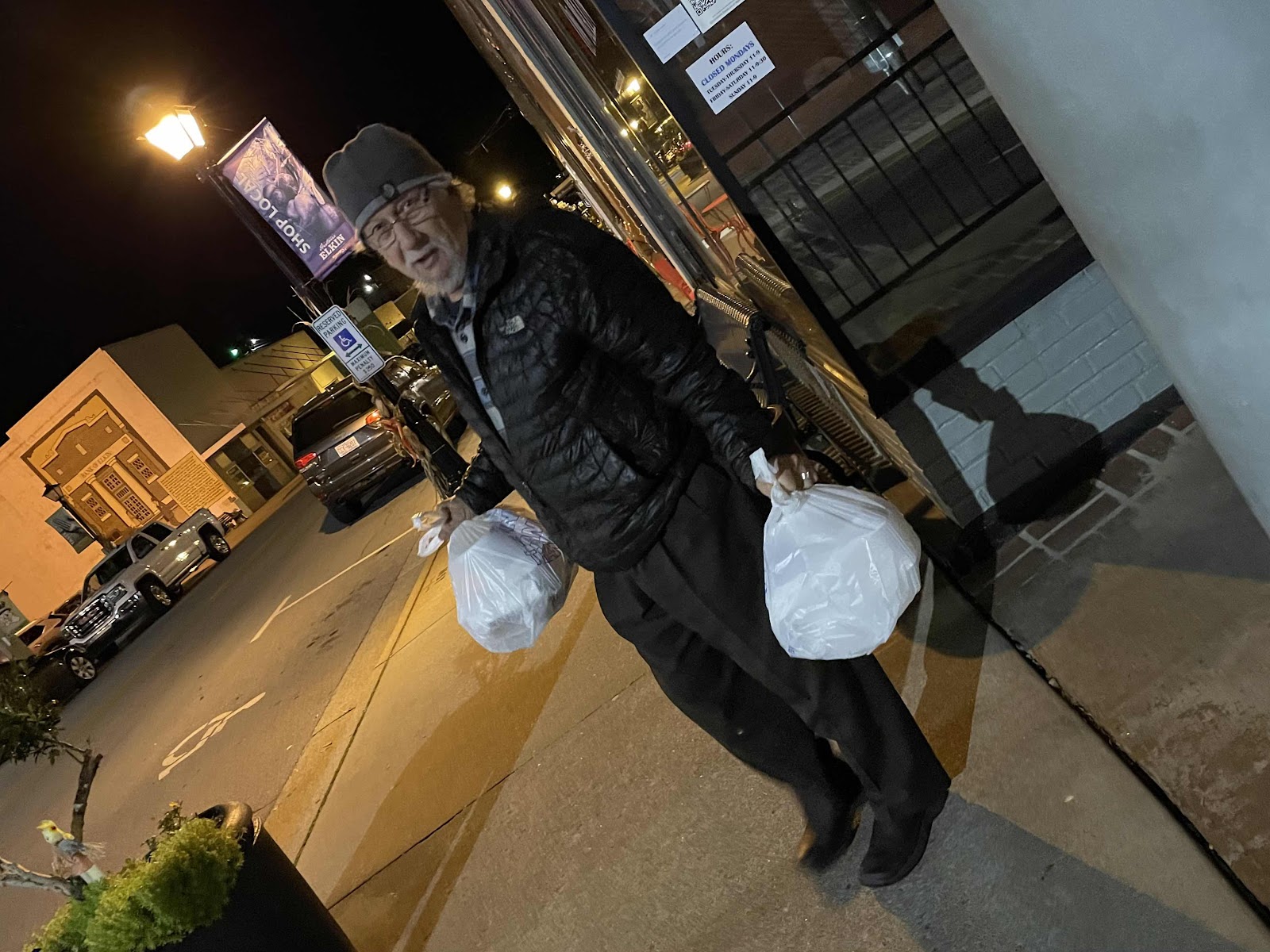 When we got back to the hotel and aid out the feast I put the cards back in my phone holder and of course the others were missing. I went downstairs to check the car and found nothing so impulsively I jumped in the Prius and gave myself a five second class in learning how to drive a hybrid. 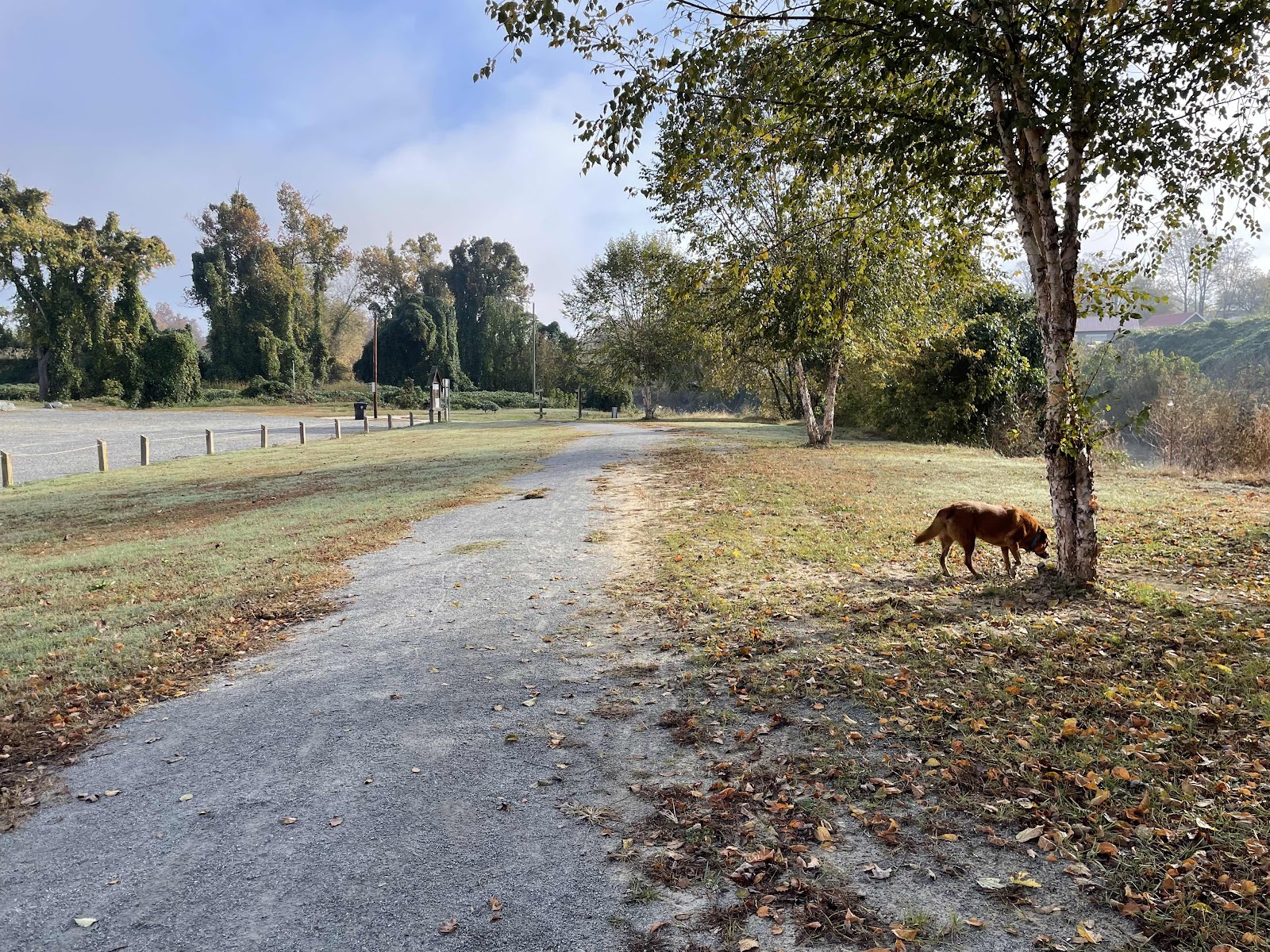 Starting it was confusing as pressing the button got no sound at all and then I realized the little live action drawing of a car driving over a hill was the message that we were live. The gear box was a weird little stump with some side action required to get the thing in gear and off we went. I object to being told how to drive by a machine as I've been doing it long enough for me to make my own mind up how I want to drive. This thing fires off statistics and beeping noises like nobody's business but it got me back to Elkin rapidly enough. The glint of plastic on sidewalk showed me where I was as lucky as I ever deserved to be and I got back in the yelping Toyota and sped back to my congealing yet excellent dinner. 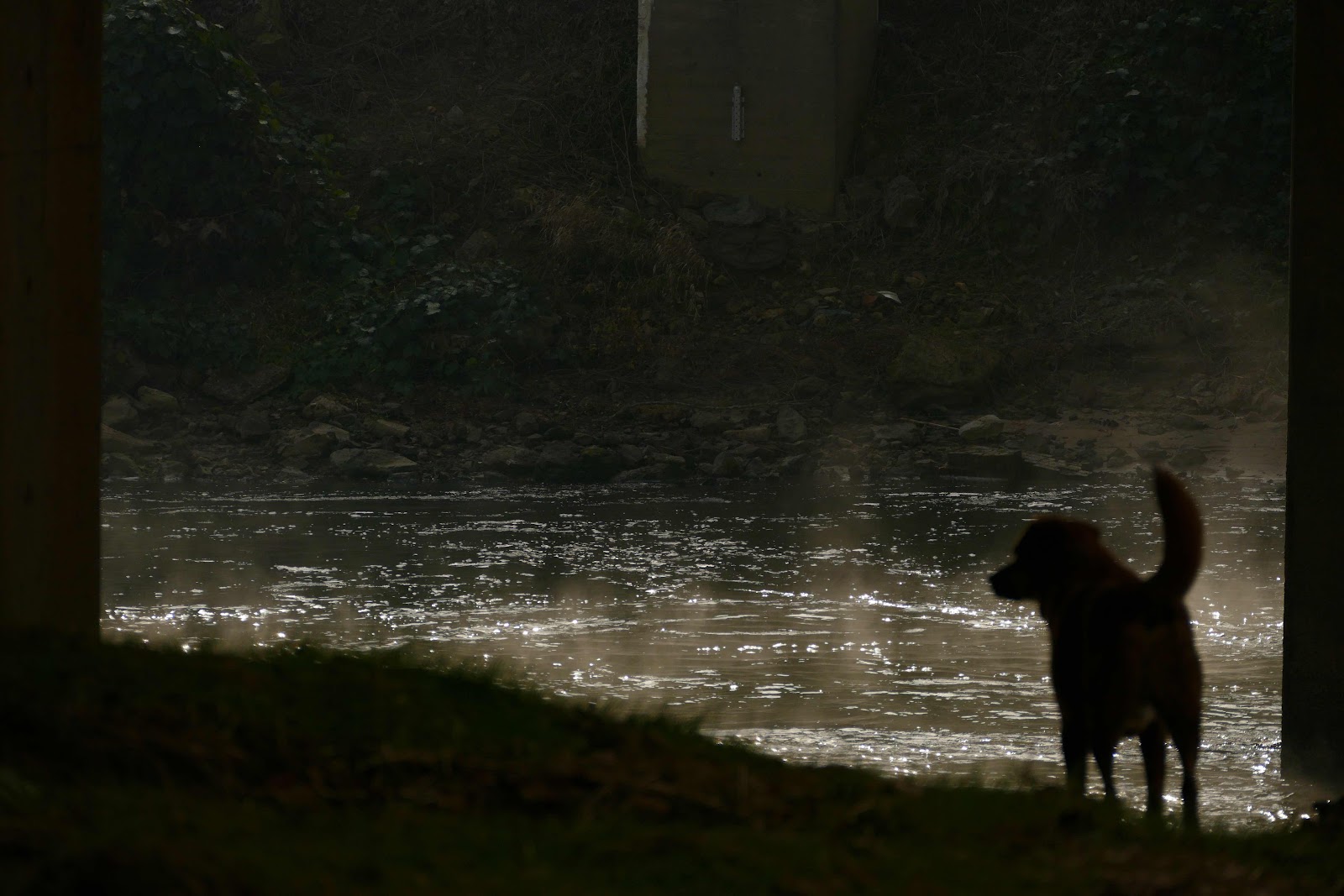 Back to the park where Rusty and I walked and wandered along the riverbank. I have a feeling if I took hormone pellets, whatever they are, something dire might take place but I'm not exactly sure what. The faces on the billboard were smiling though so perhaps I am overly cautious. 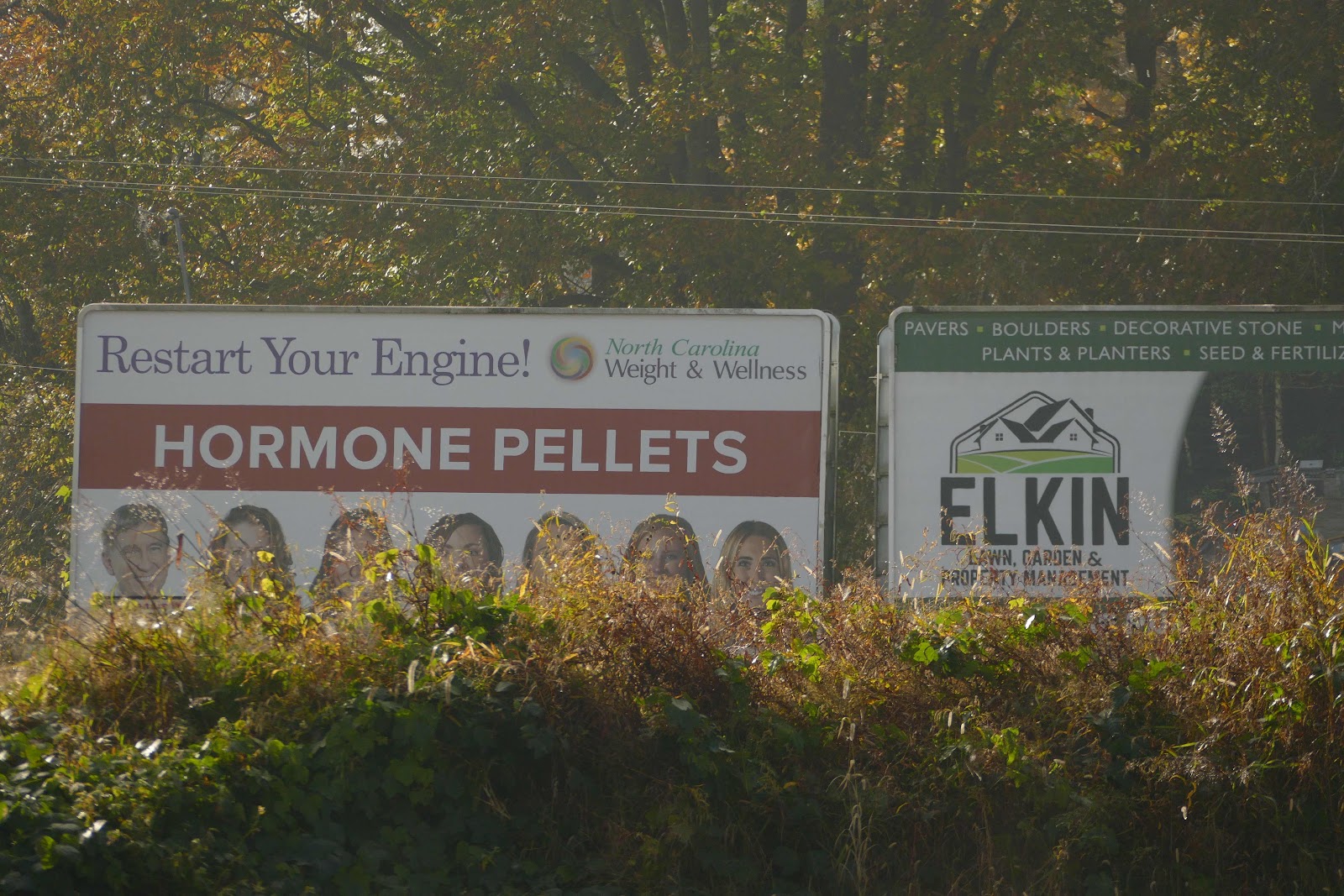 On the road with no deadlines I find these spots to be gifts. An hour spent here with my dog for company was as good a way to start a frosty day as any I can think of. 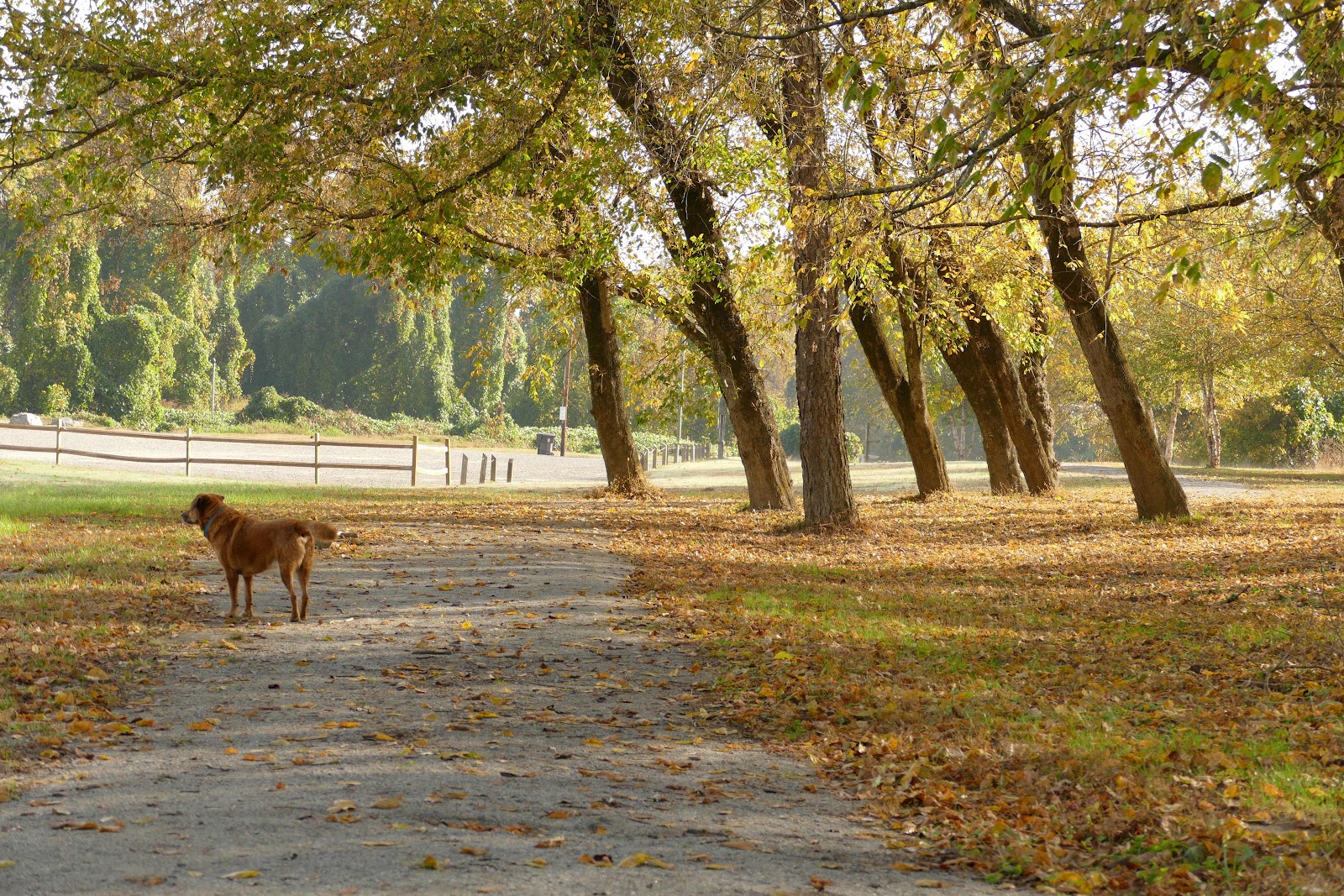 I had work to do so I wrote an entry for this page sitting at my van desk then I emptied my portable potty into the public toilet in the blue building. That was quick clean and easy as the toilet tank comes with a discreet bag carrier I carried over my shoulder. Then I emptied our tiny trash can, swept the van and was ready to be recalled to family duties. 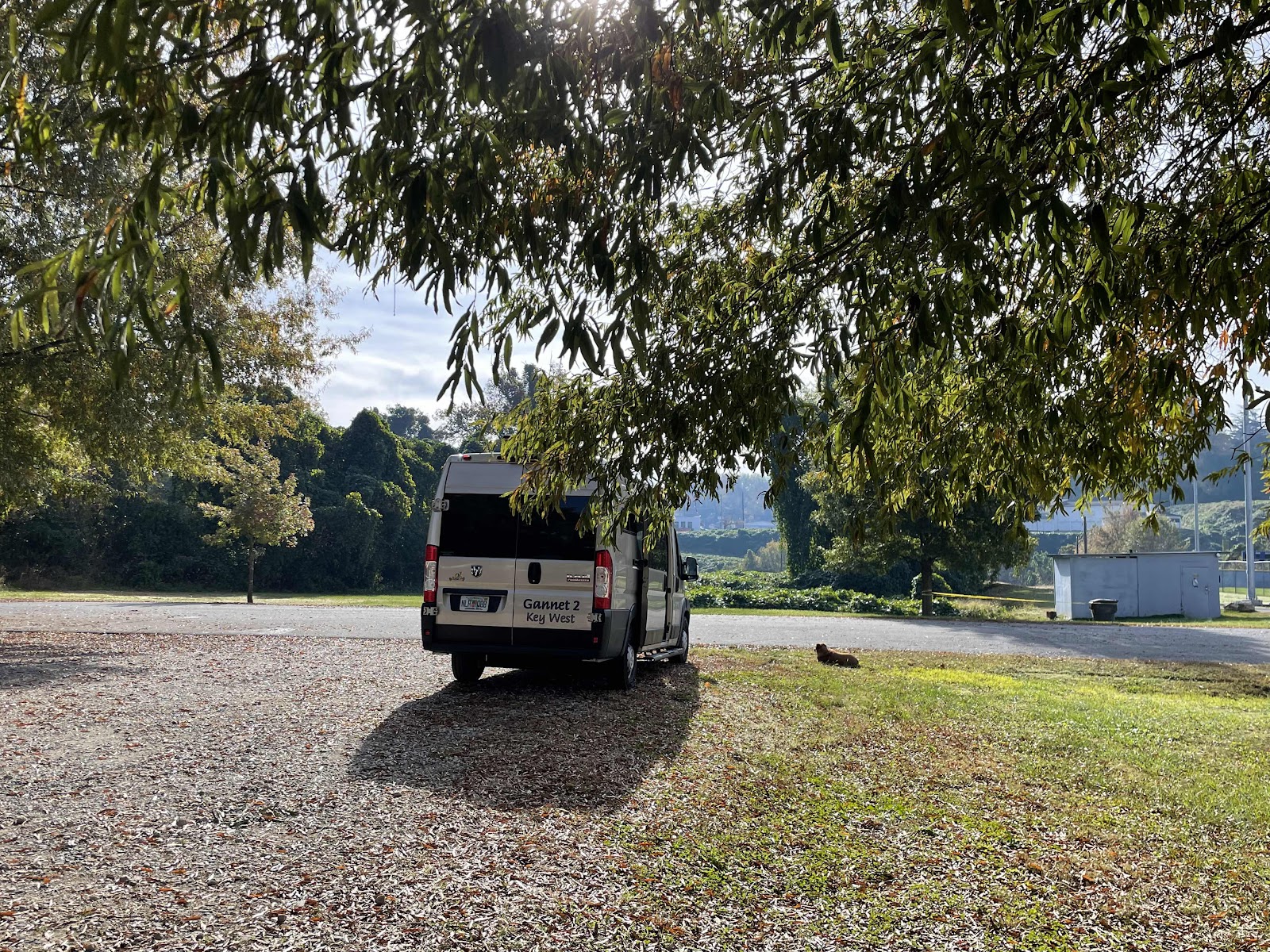 The call came too soon for Rusty or I and it was time to go make conversation eat cheese ands a little wine. We could have hung out all afternoon in this quiet unobtrusive spot. We made in a winery later: 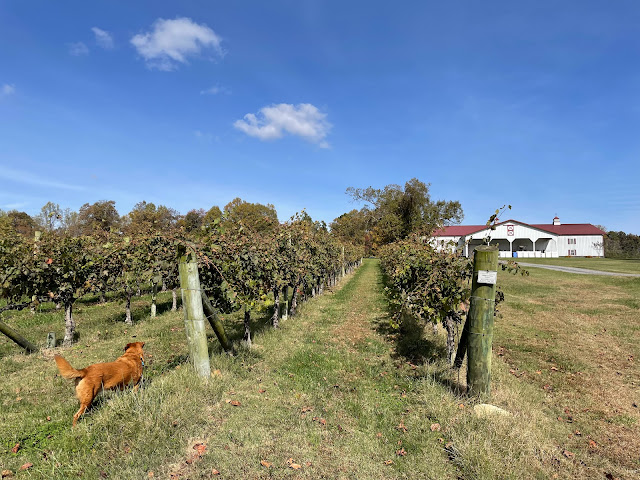