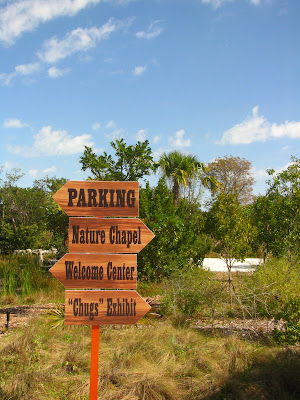 I stopped by the botanical garden on Stock island to see what I could make of the sculptures that are part of the annual winter exhibits in Key West and i didn't find much. I saw the sign to the chugs exhibit but apparently the Cuban rafts are not yet on display because Cheyenne and I dead ended into the golf course without seeing any of the so-called chugs. Perhaps at a later date, because I do find the boats used by Cuban emigres to cross the Gulf Stream to be quite fascinating. In our culture anything that is not ideally suited to the task is not even considered, whereas in Cuba under the embargo learning to make do is the skill they need. 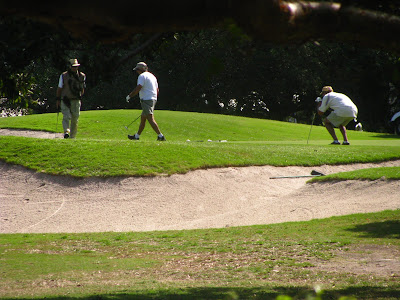 This dragonfly made from found items must be part of the permanent display as it has been around a while, and very charming it still is too. 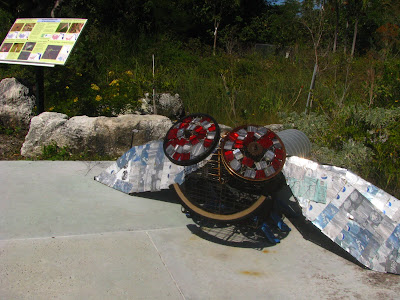 Cheyenne was getting ahead of herself as we patrolled the ponds at the back of the 15 acre garden. It's interesting to note that this place will soon celebrate it's 75th anniversary as it was built with funds set aside by FDR's stimulus programs in an effort to put people to work and get Key West out of it's Depression era bankruptcy. These days with our own 21st century Depression we prefer to tear everything down instead of even now trying to put our people to work to build lasting monuments. 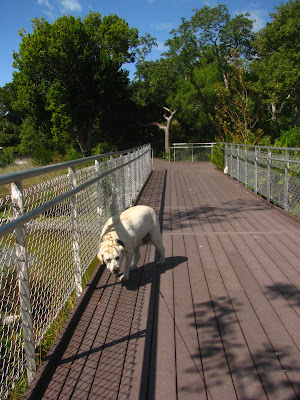 An energetic retiree from New York took this place in hand in the waning years of the financial boom and got grants and money to make things better. The original garden was 55 acres in size but nowadays thanks to development it is down to 15, well used acres. 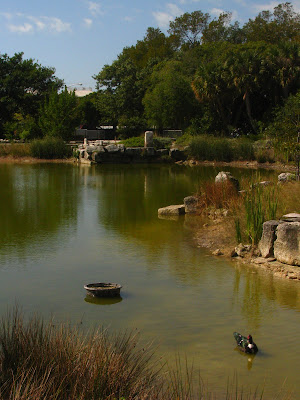 I guess these art works have been around for a few years too. 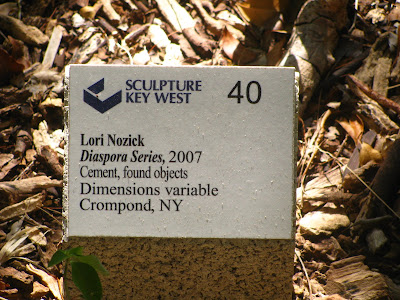 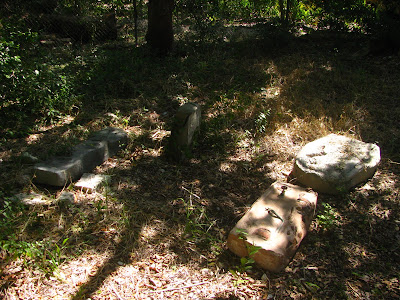 I also spotted the chair with a ball on it from a previous Sculpture Key west exhibit. I took the Pond Loop trail to check out the turtles which apparently are making a comeback. They got wiped out in the unsupervised years because I am told certain members of the community liked to make soup out of them. 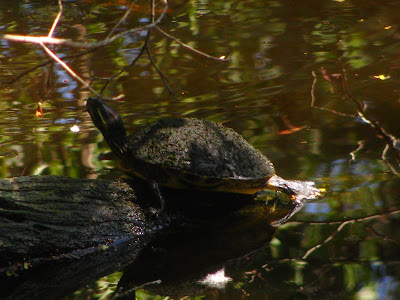 Cheyenne found their floating medium to be a delicious soup. 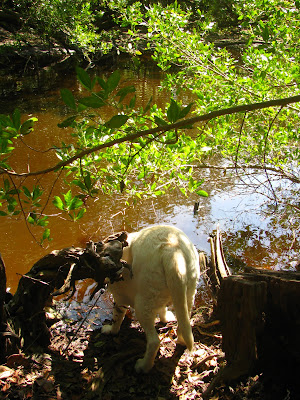 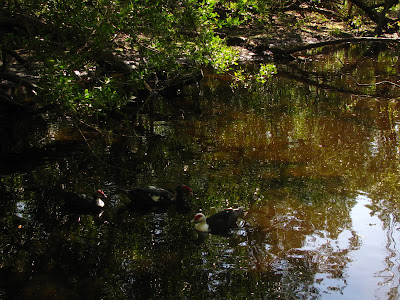 This is my favorite tree in the Botanical Garden. For some reason I love the shape of date palms and this one is called a Canary Island date palm. I used to come and sit under it as a break while pedaling home from work back to my sail boat at Sunset Marina. I liked to listen to the wind whistling through the trees on windy evenings, none more so than this one. 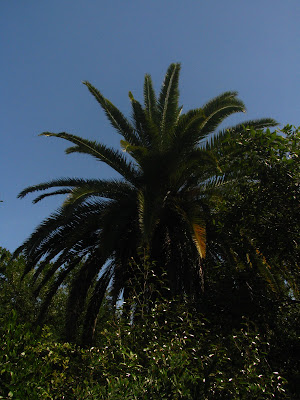 Back on the boardwalk trail we came across this: 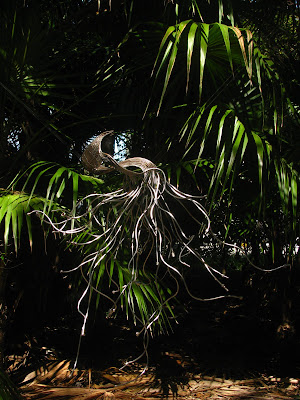 All the way from Maine this year. This next exhibit I liked a lot, in it's simplicity and it's apparent sense of humor. 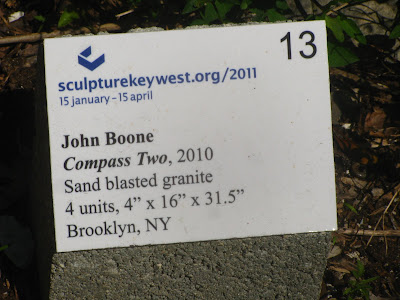 I can't help it that an artist from the Big Apple had to be the one to come up with this one... 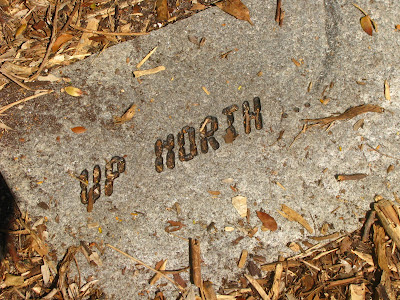 I use the phrase Up North in these essays with a touch of ironic amusement. Back East has it's own flavor: 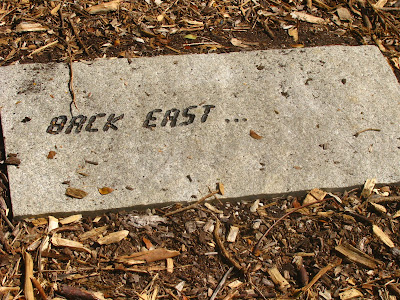 I find Down South to have some hint of hillbilly condescension in it... 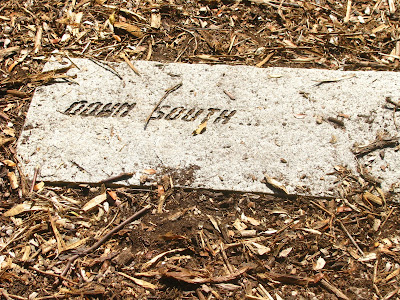 ...and when I lived in California I hated Out West. When I worked for radio networks based in the east (Back East!) I hated when I was referred to on air as Out West. I live in the west I said and I'm not gay nor am I floating in the outer galaxy. The importance of my stories was always, it seemed to me, limited by my distance from the east coast hub of the network. 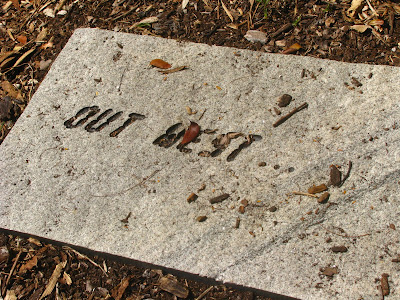 That sculpture struck a chord with me. Roosters were not part of Sculpture key West but lacking any further exhibits I figured they would do as well as anything. 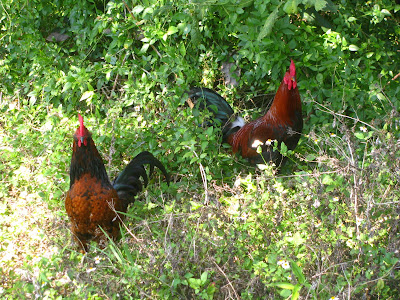 The n this dude strode up to me rather aggressively as Cheyenne and I paused on a bench (Cheyenne was at my feet). "Is that your dog?" he barked. "Yes" I replied. "I have her rabies certificate in my wallet." "Oh," he said. "We lost a yellow dog from the pound up the street." "I paid you lot fifty bucks for her," I said. 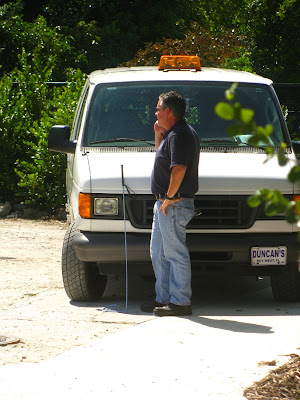 I rather admired the fugitive wherever he was. I hoped he stole a motorcycle, not mine, and rode for the border like Steve McQueen.
Posted by Conchscooter at 12:01 AM 11 comments: Links to this post