It happens that when you sit at the beach in your van you run out of fresh food. If the van is parked 15 minutes from town you clear the decks and take to the mud roads back to main road into San Carlos. 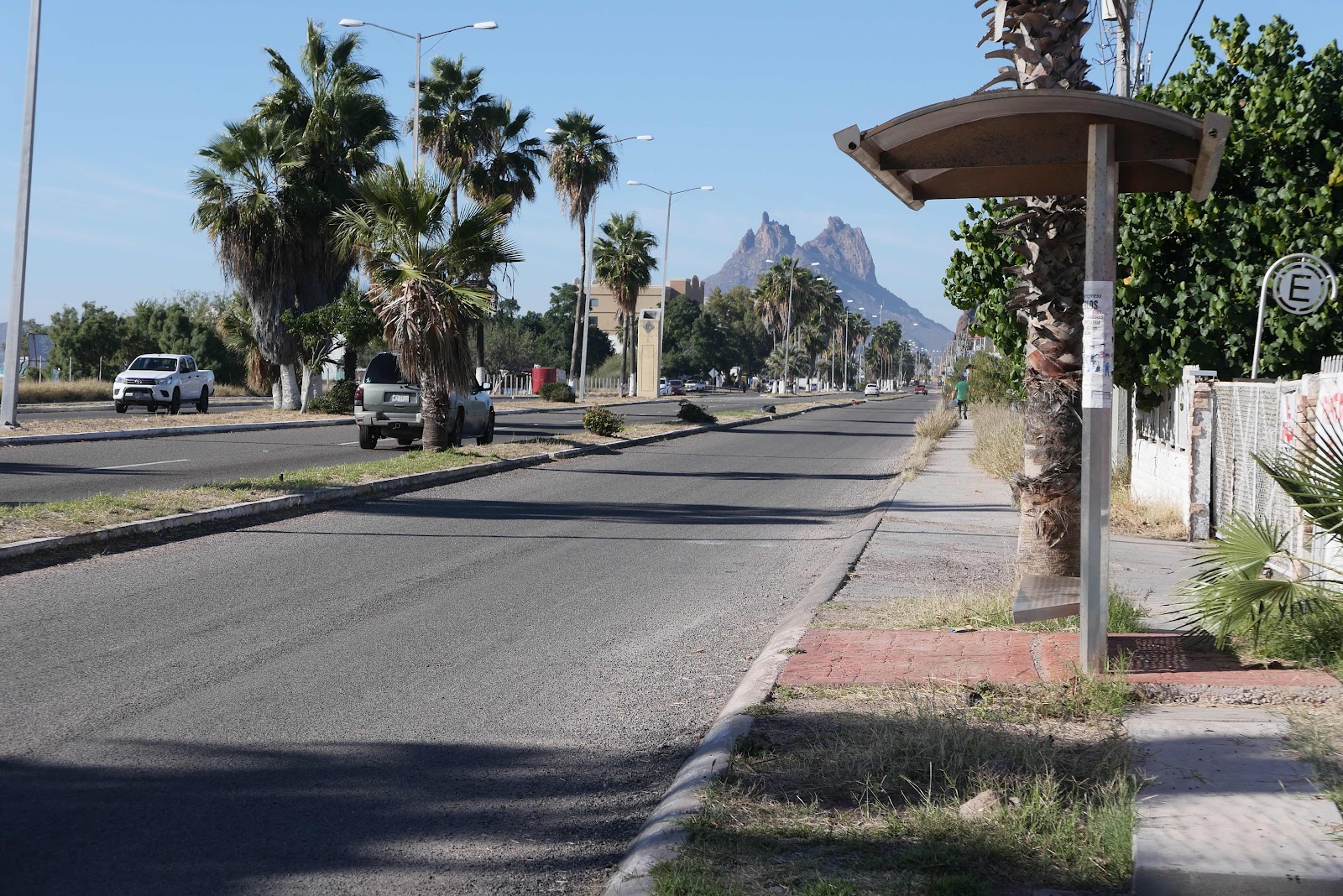 Our neighbor Ron told us about this fabulous bakery as you get into the outskirts. Naturally we missed the giant white sign advertising Rudy and Ruth’s Old European Bakery so I had to make a series of complicated turns to get back and park.  Job done. Eventually. 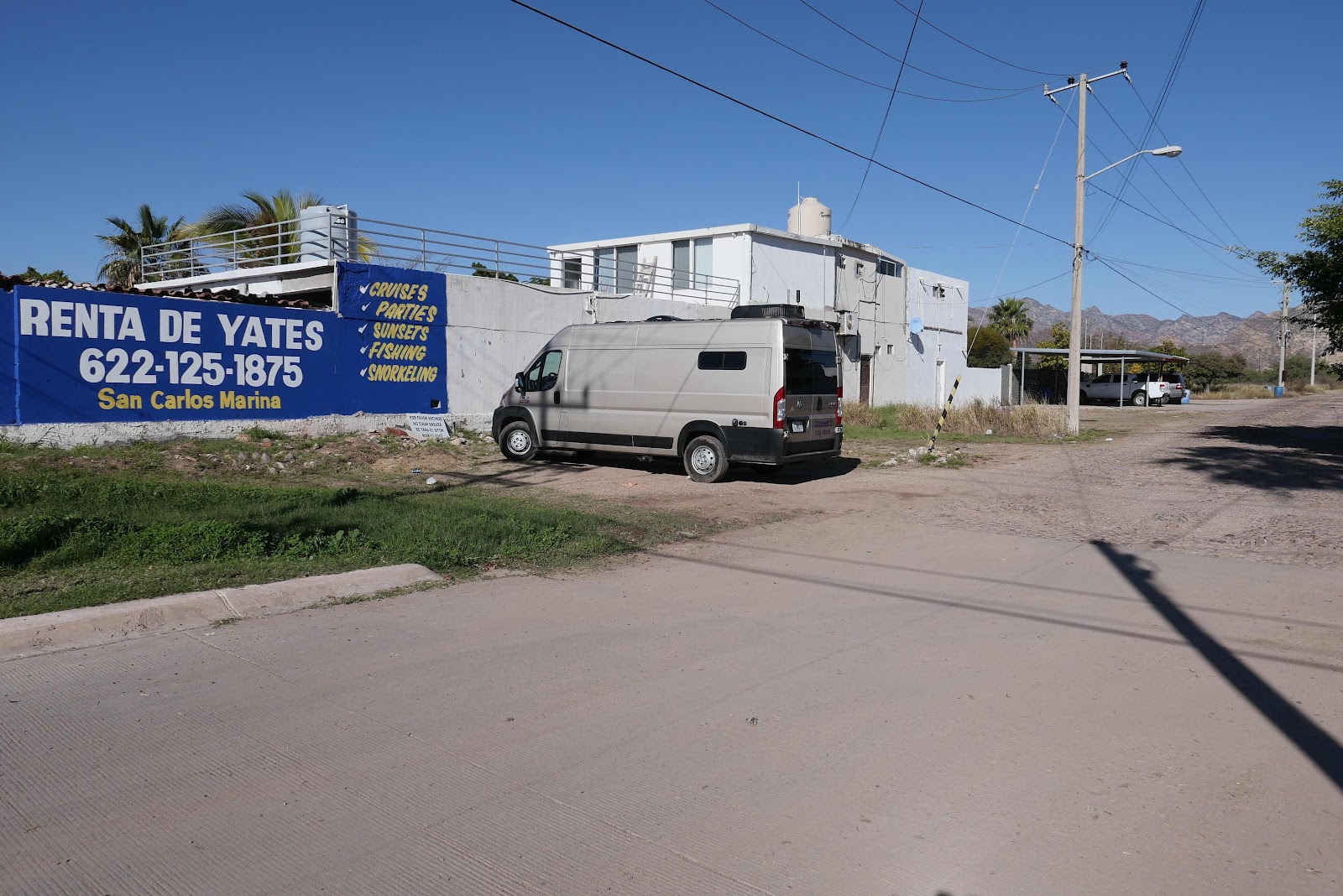 Ruth speaks English with a German accent but it turns out she’s Mexican   born it in the capital Mexico City, of German parents. Rumor has it Rudy is of Spanish extraction. They are demon bakers. Their ancestry is as mixed up as is mine, so there is that as well. I am in love. 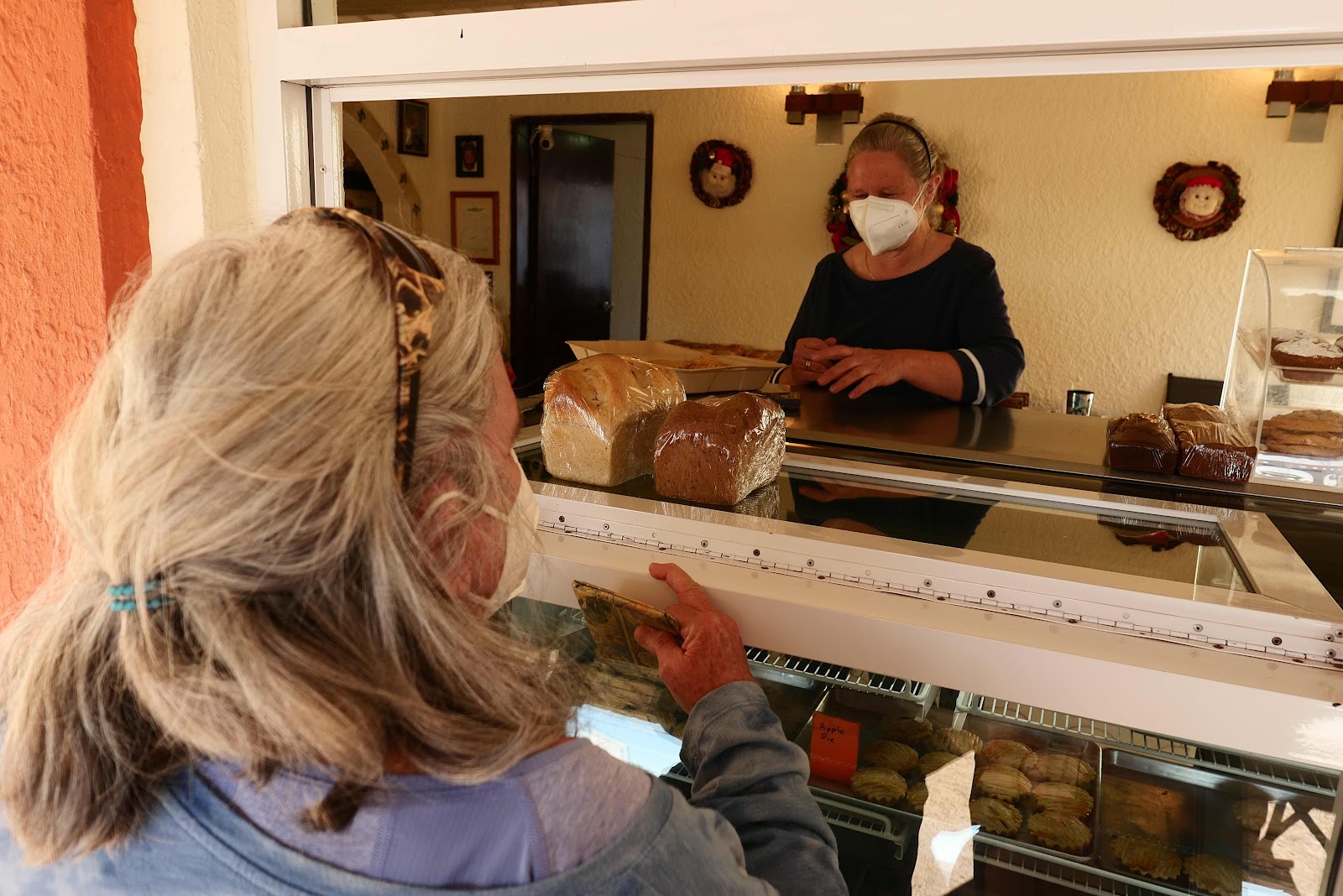 We got two loaves and two fruit pies   Naturally I wanted to go overboard but the Admiral kept me in check. We spent eight bucks. 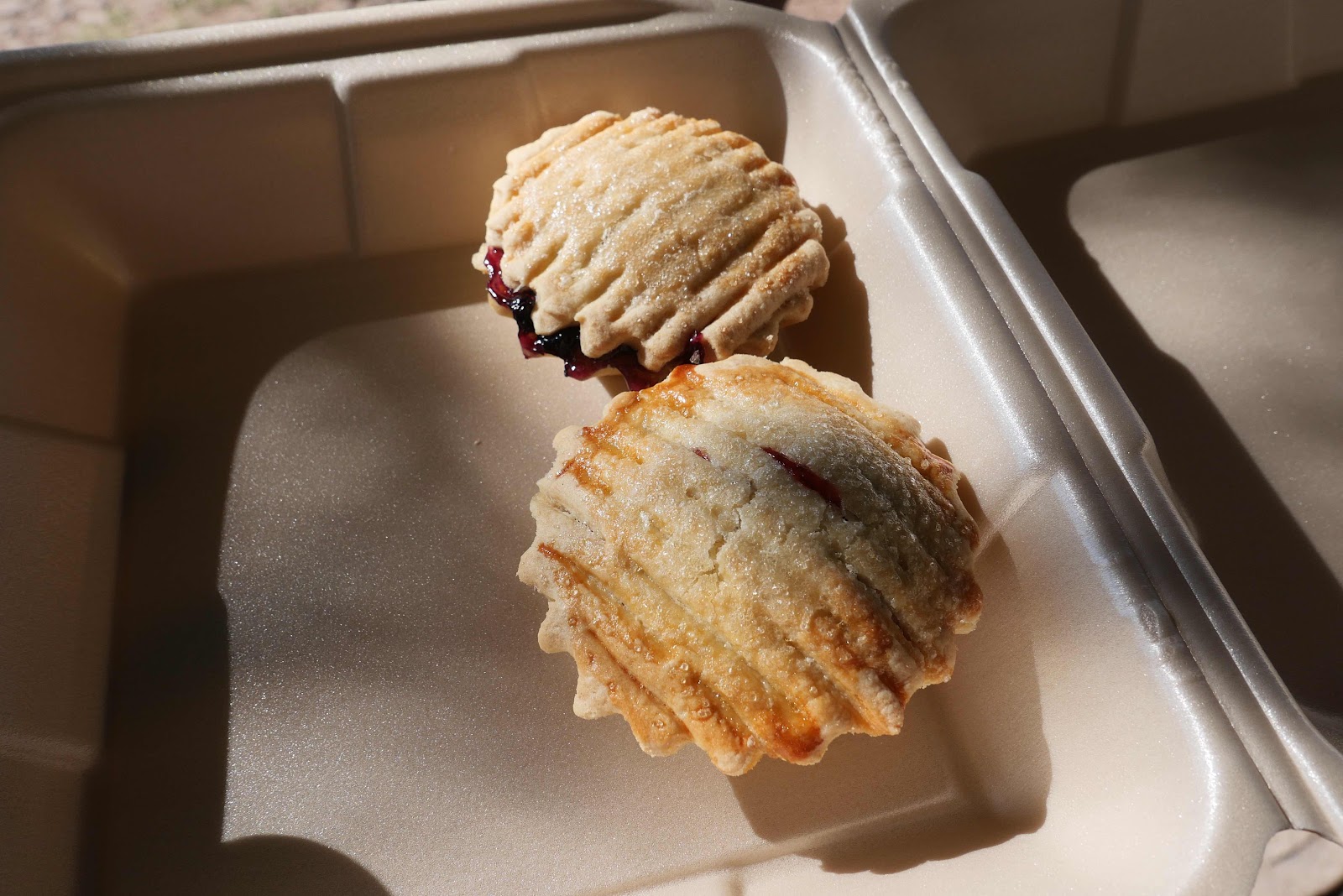 Layne pulled out her Trader Joe’s fig jam and a slice of Muenster cheese from the Guaymas Walmart so we had breakfast there and then. I love living in a van drinking my own hot tea and eating a thick slice of freshly made bread on the side of the road at home. 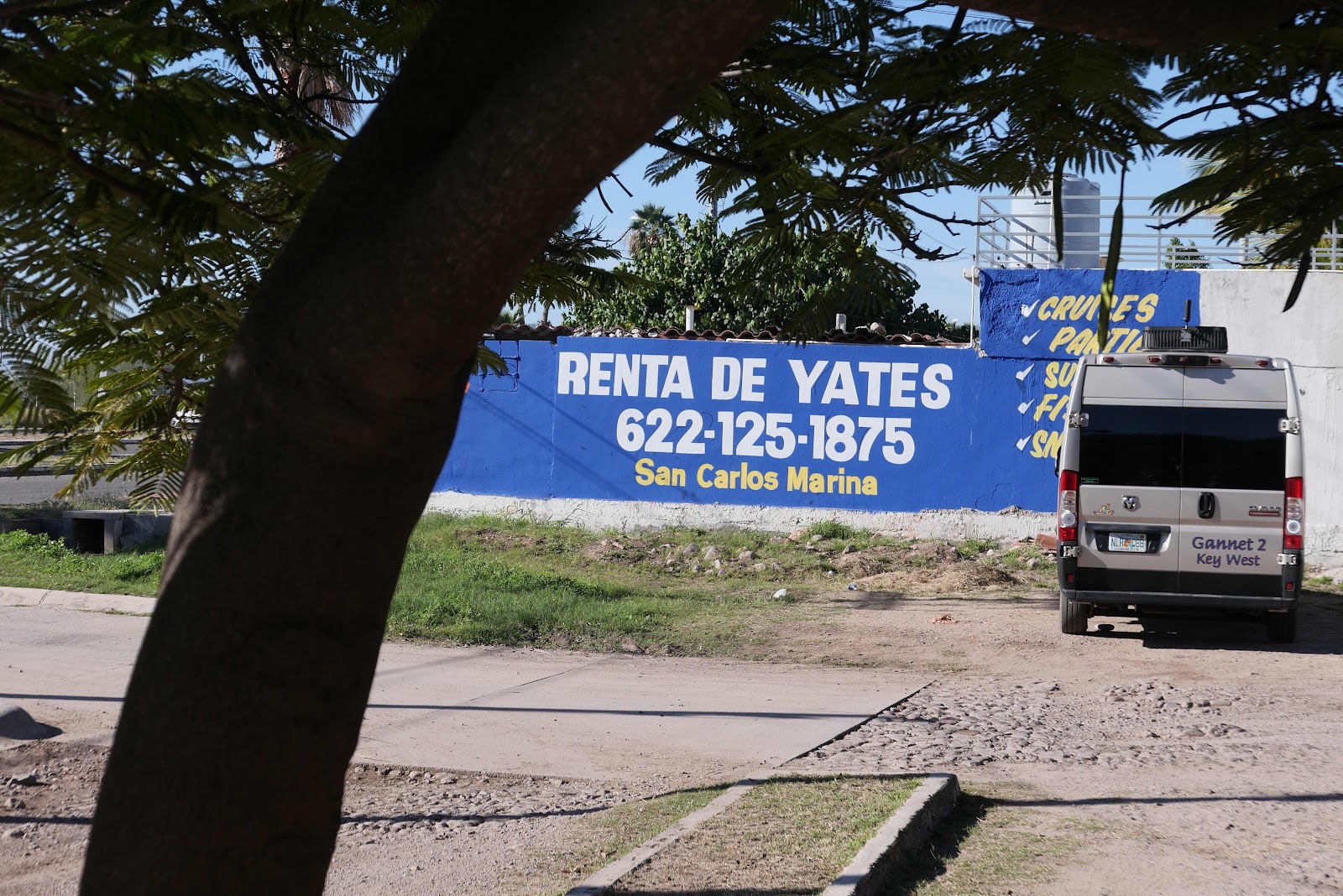 Next stop was fruit and vegetables at the Ley supermarket. San Carlos is laid out with the commercial district on the main highway into town so just keep driving until you see what you are looking for. 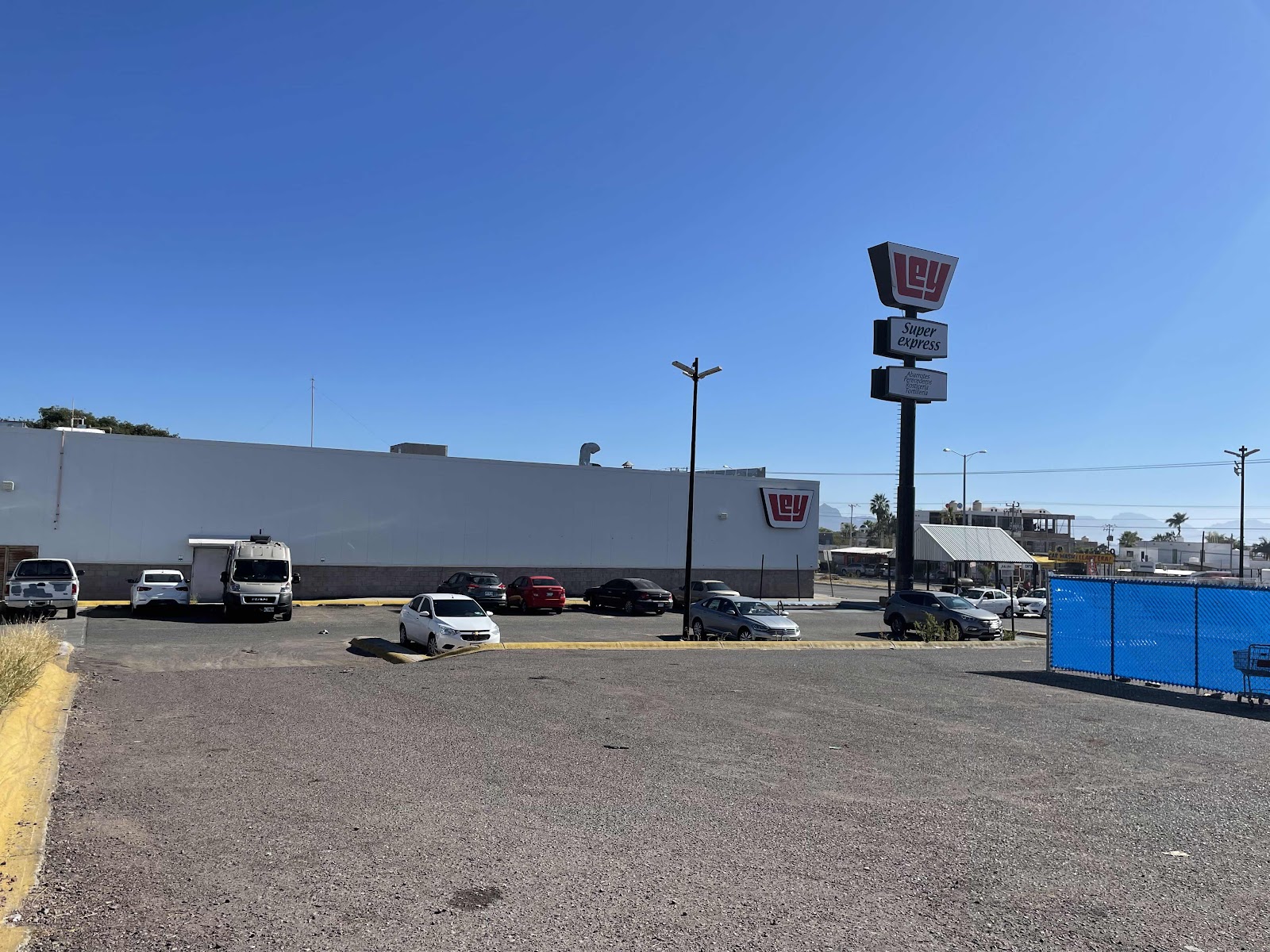 The supermarket was not great but I saw an abandoned minivan with an upside down dinghy on the roof with a 1991 Arizona registration. The dinghy was stuck on to create a raised roof. Very clever. 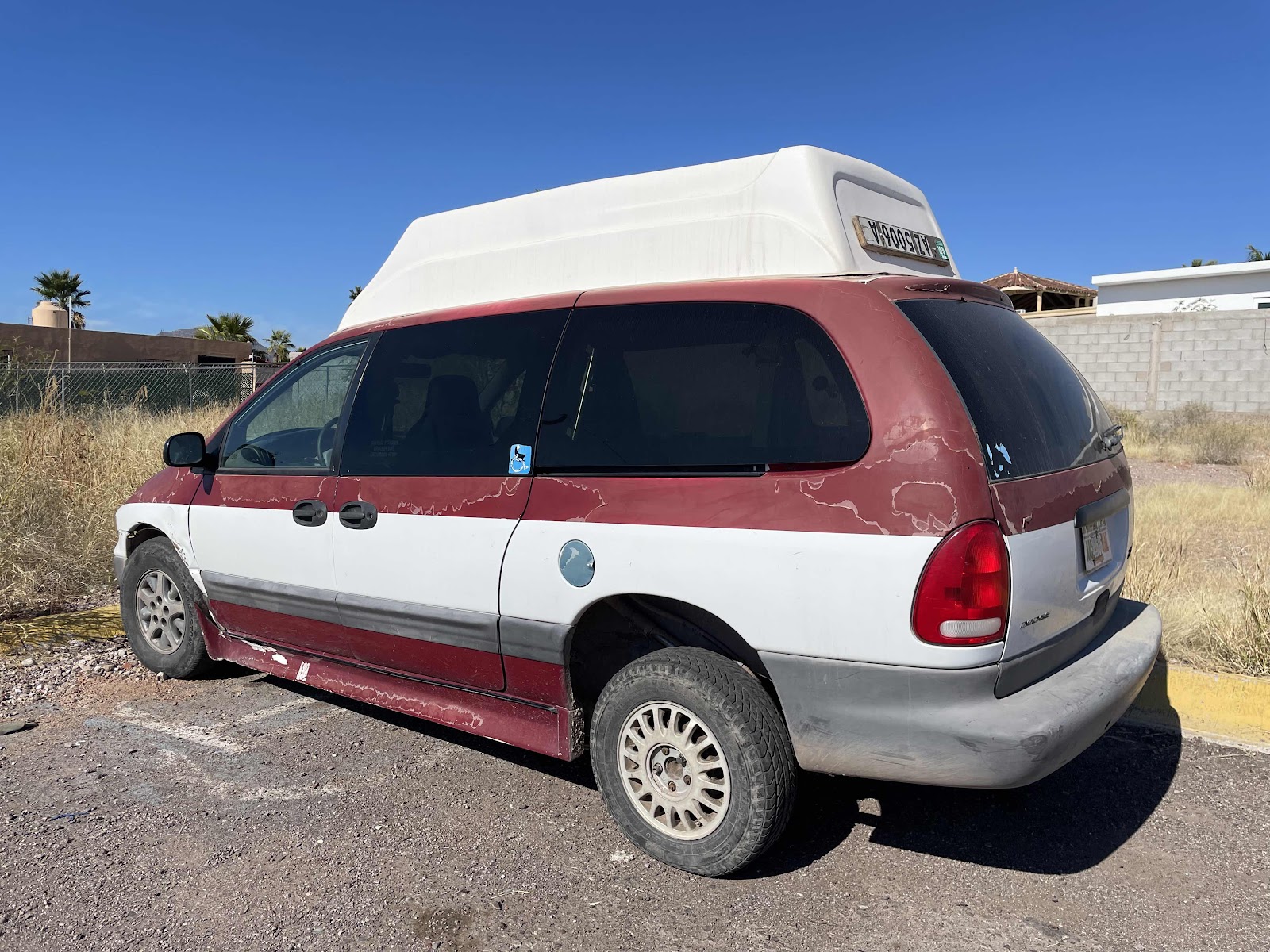 We went by the marina as I was looking for a wider mouthed funnel to make loading the water tank by hand faster. I failed but we went by a ferret shop as well and that ended up not working. Hardware stores in Mexico are called ferretería so naturally we call them ferret shops. 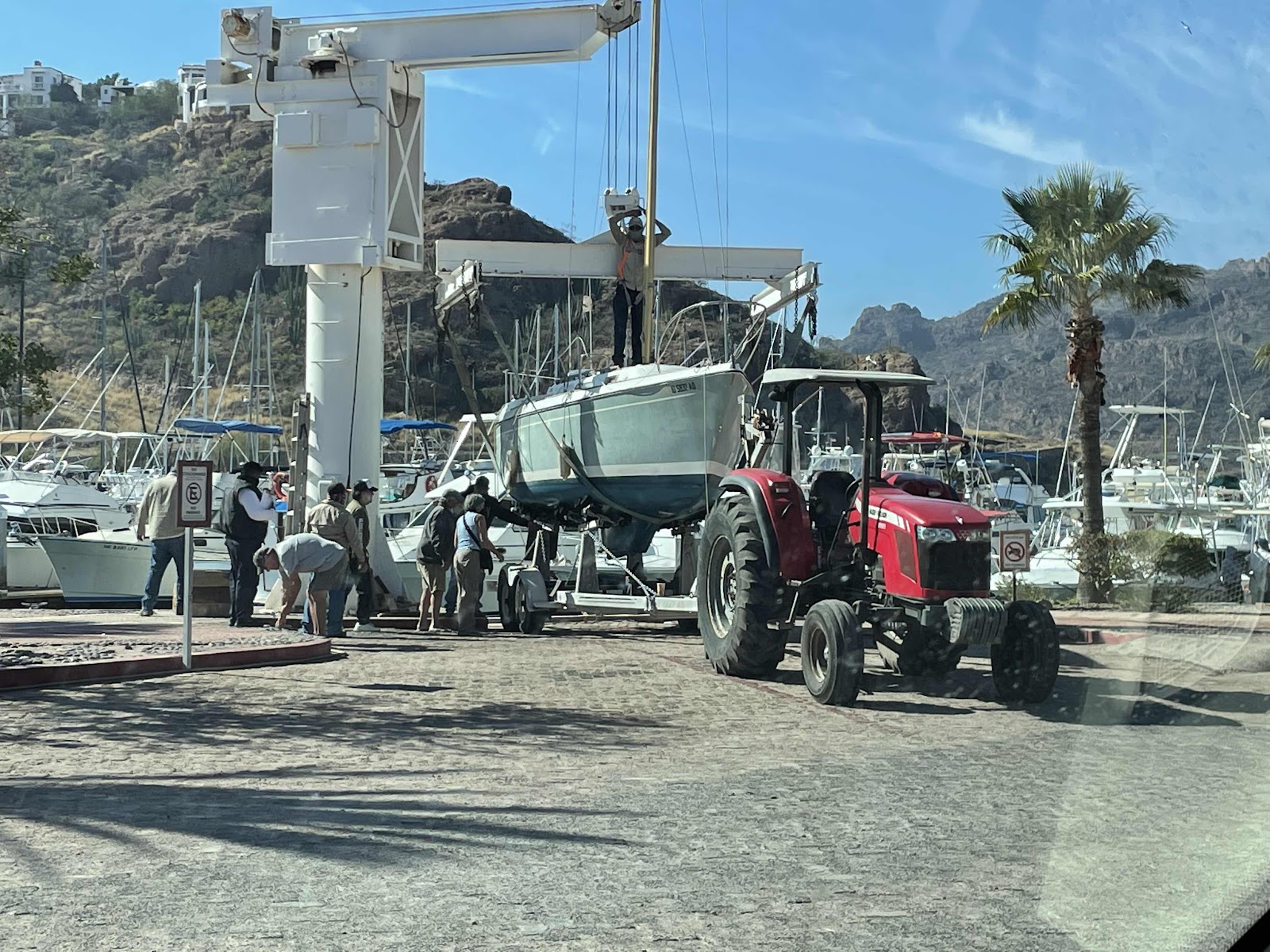 I watched them fussing around the boat out of the water and felt relief that it wasn’t me doing the haul out. A passerby asked where we were from and I told him Key West and we had switched from boats to vans for a simpler life.  He laughed and walked back toward the docks. 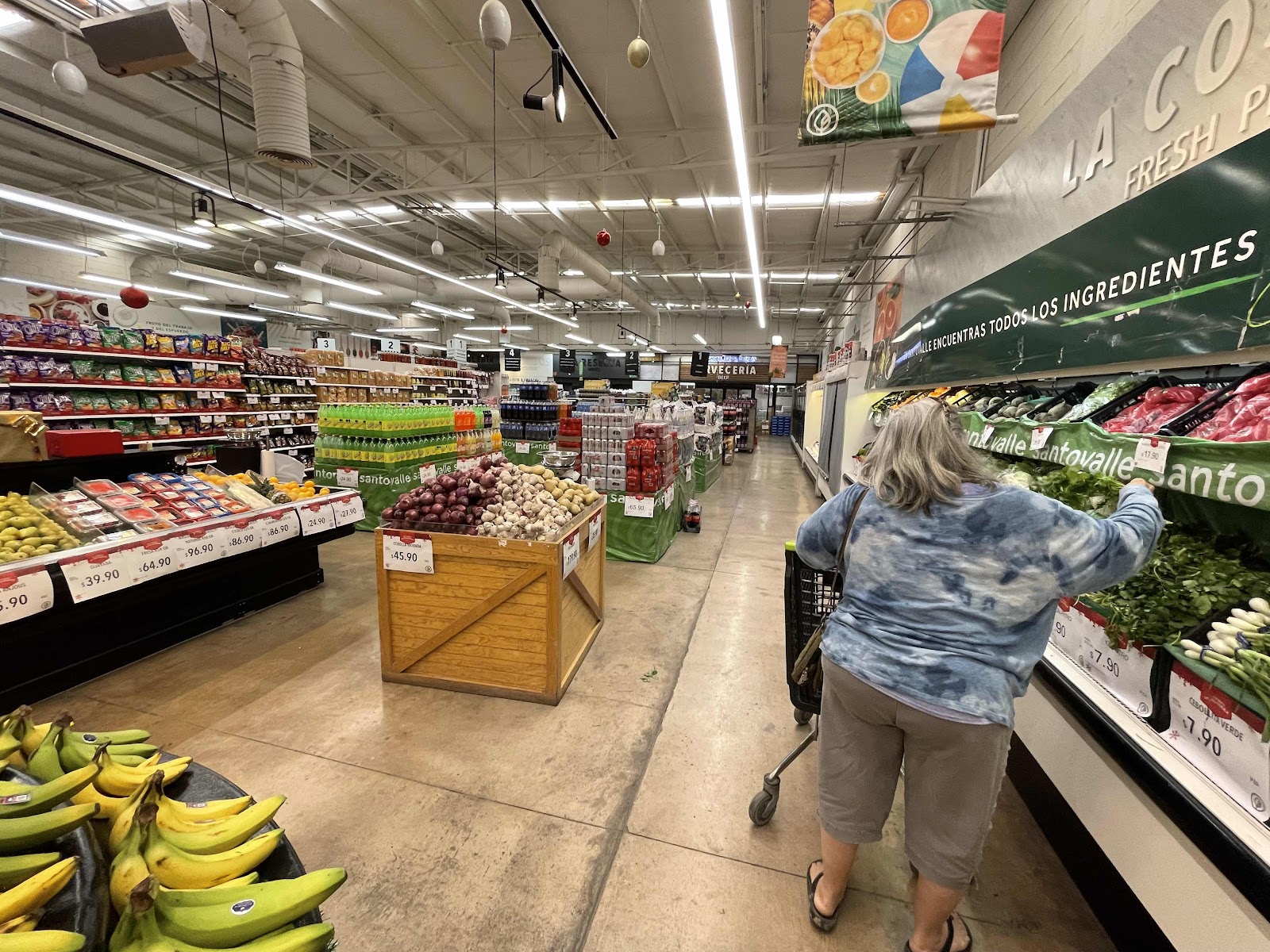 If you think Mexicans shop in third world open air markets as though the 20th century by-passed them think again. You can find many of the same products you see in the US even if not the name brands you recognize. 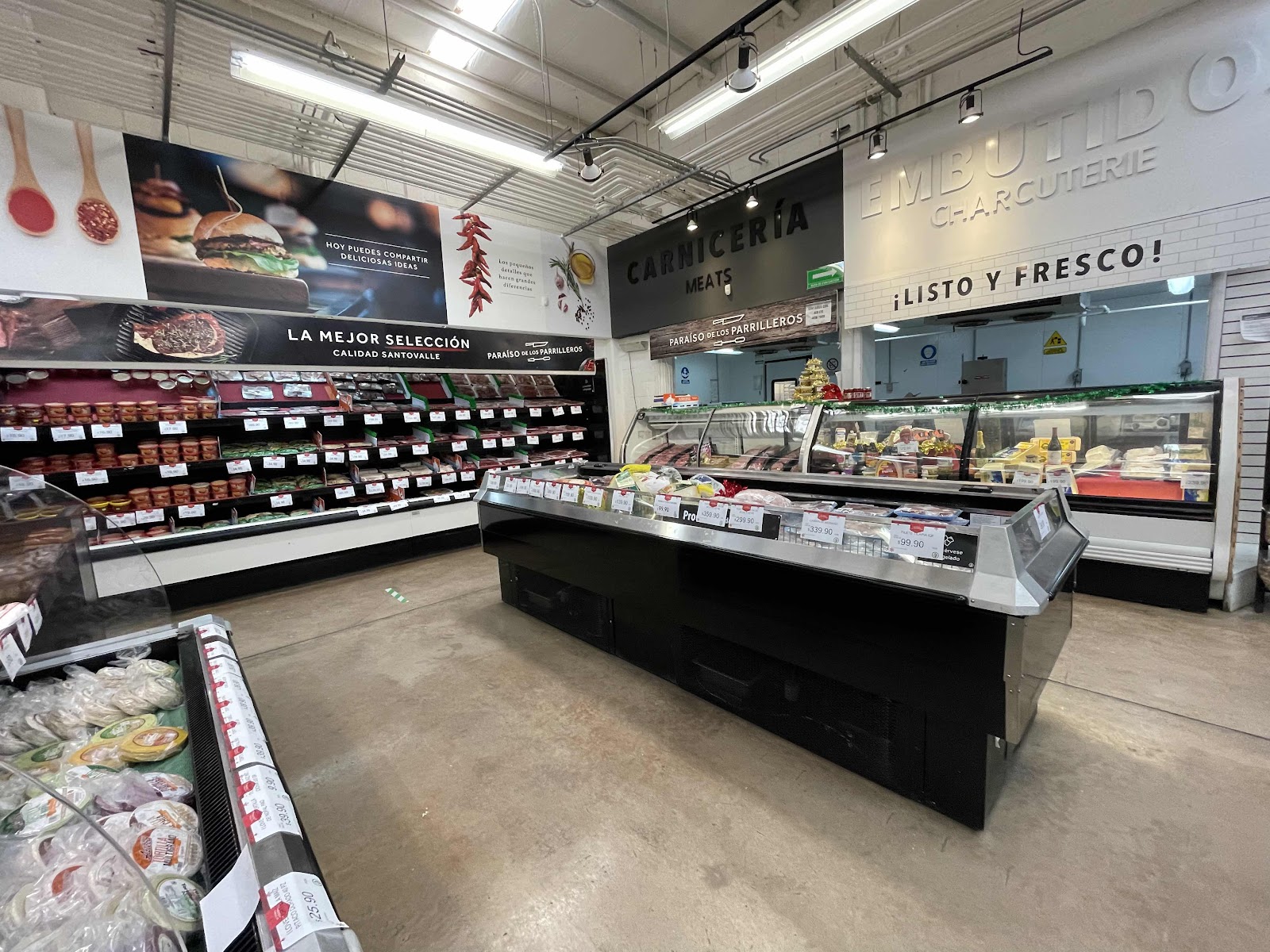 Santo Valle near the gringo marina is the upscale market but to Layne’s surprise not all the prices were higher. The kid bagging our groceries at the upscale market spoke fluent colloquial English a skill he attributed to his grandfathers interest. We suspected his grandfather owns the market and he seemed to be stepping into the family business. Maybe Layne will find out more next time. 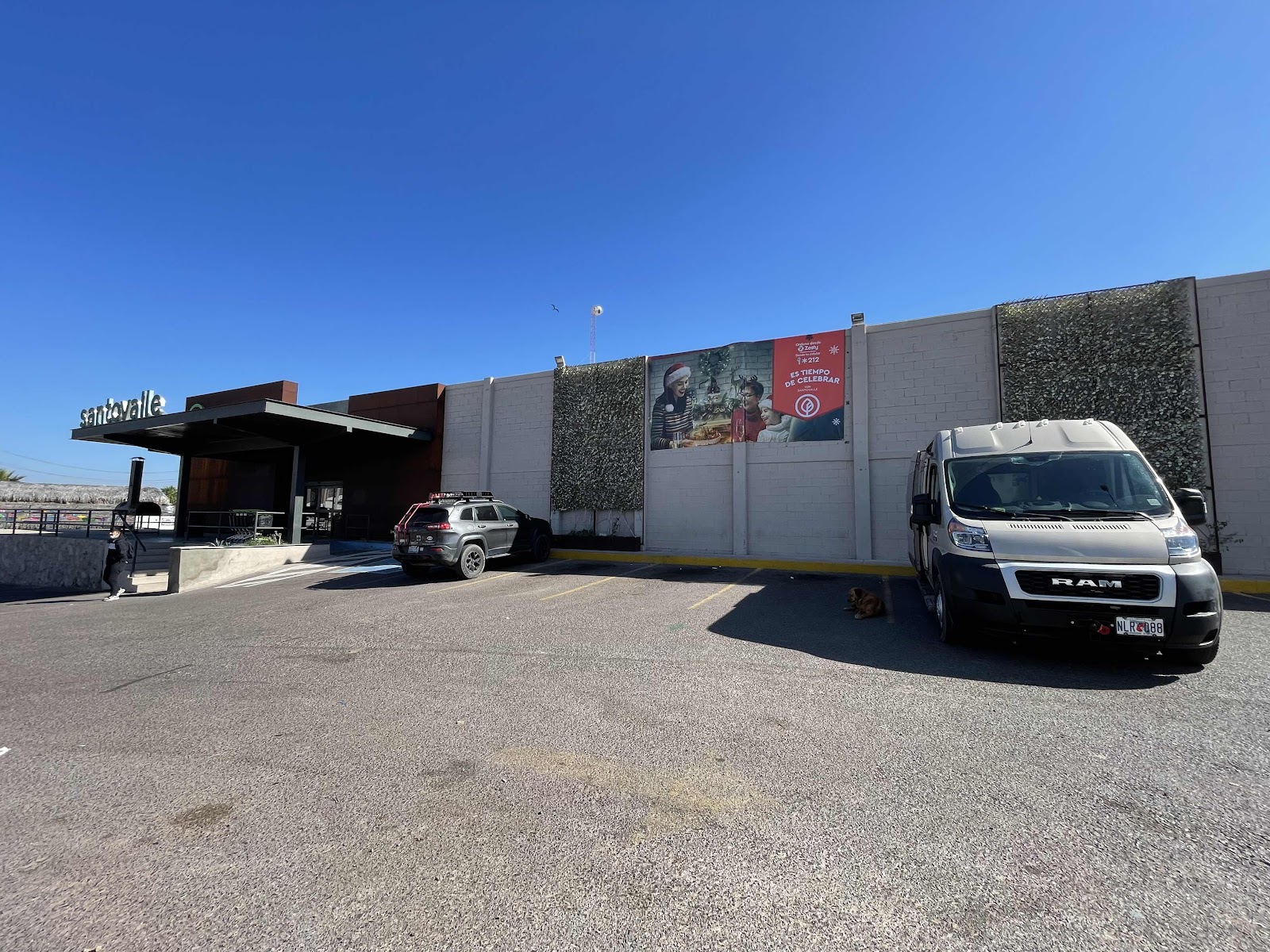 Rusty likes San Carlos where there are no street dogs to bug him and lots of activity for him to watch. He had a walk on the beach when we got back to our spot, played with another RVer’s dog, ate a huge dinner, had a fresh flour tortilla for dessert because he loves them, and passed out in his bed on our bed. A full life for him. 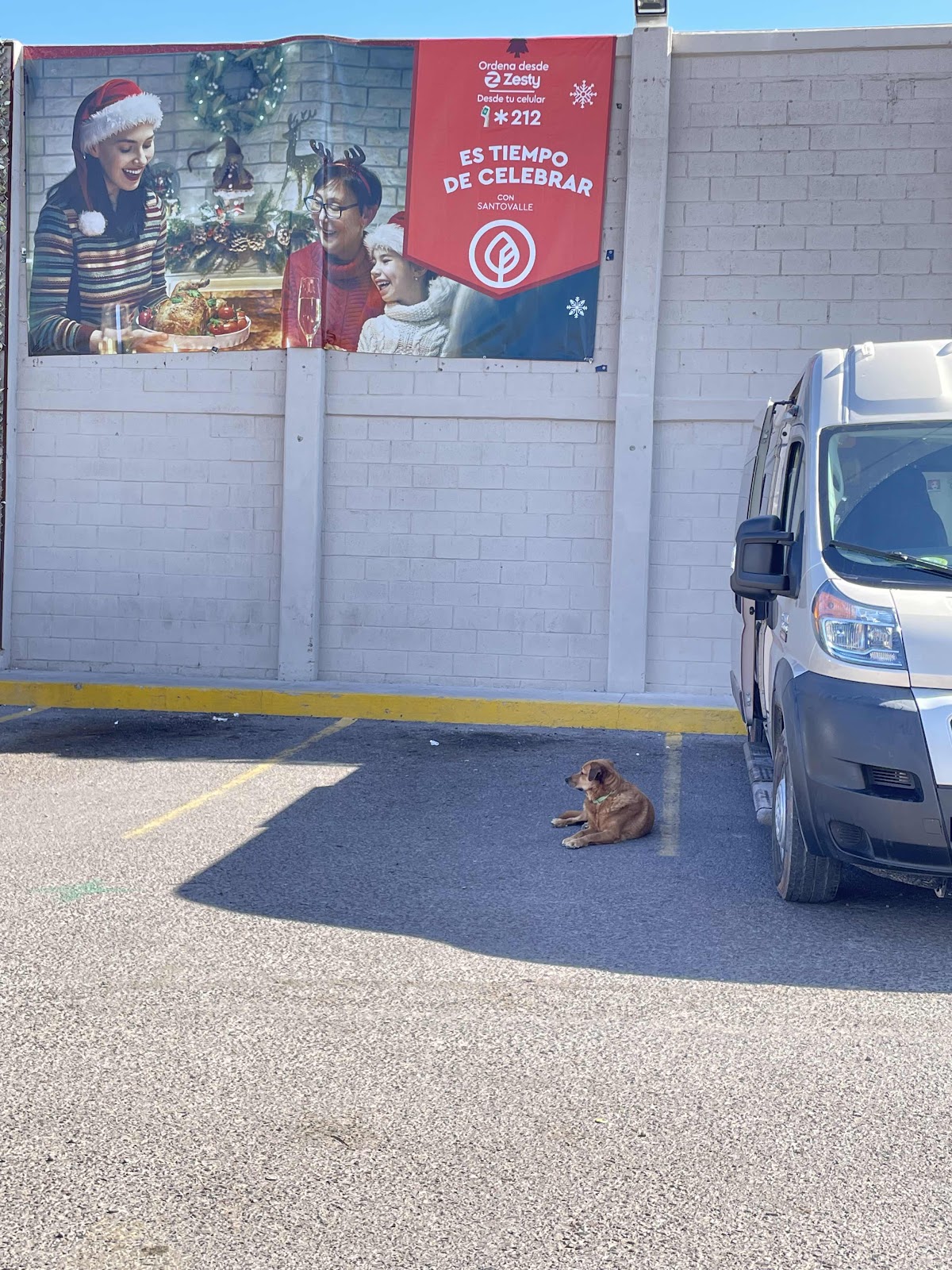 The ferret shop was on the way out of town so I pulled another, less complex u-turn and found a funnel. However it had no bend in it so it doesn’t work to fill our irritatingly horizontal filler. Three bucks wasted. 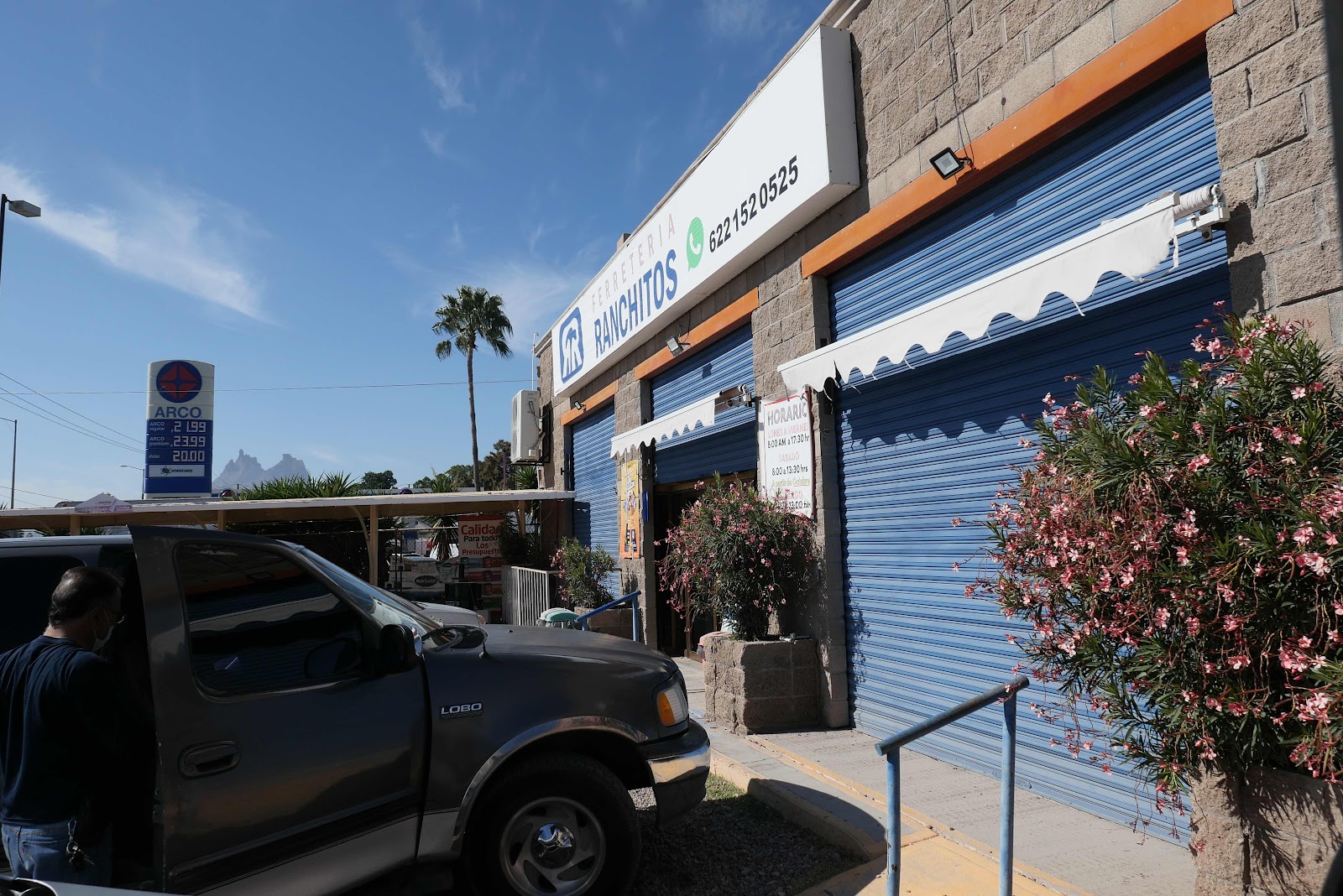 The guy in front of me in line looked older than me neatly dressed in shorts and long socks with a particular felt cap on his head. It was gray and had an insignia on it. He looked retired military and carried himself thus. I wanted to ask but for some reason lacked the nerve. He looked through me so that killed that conversation in the bud. 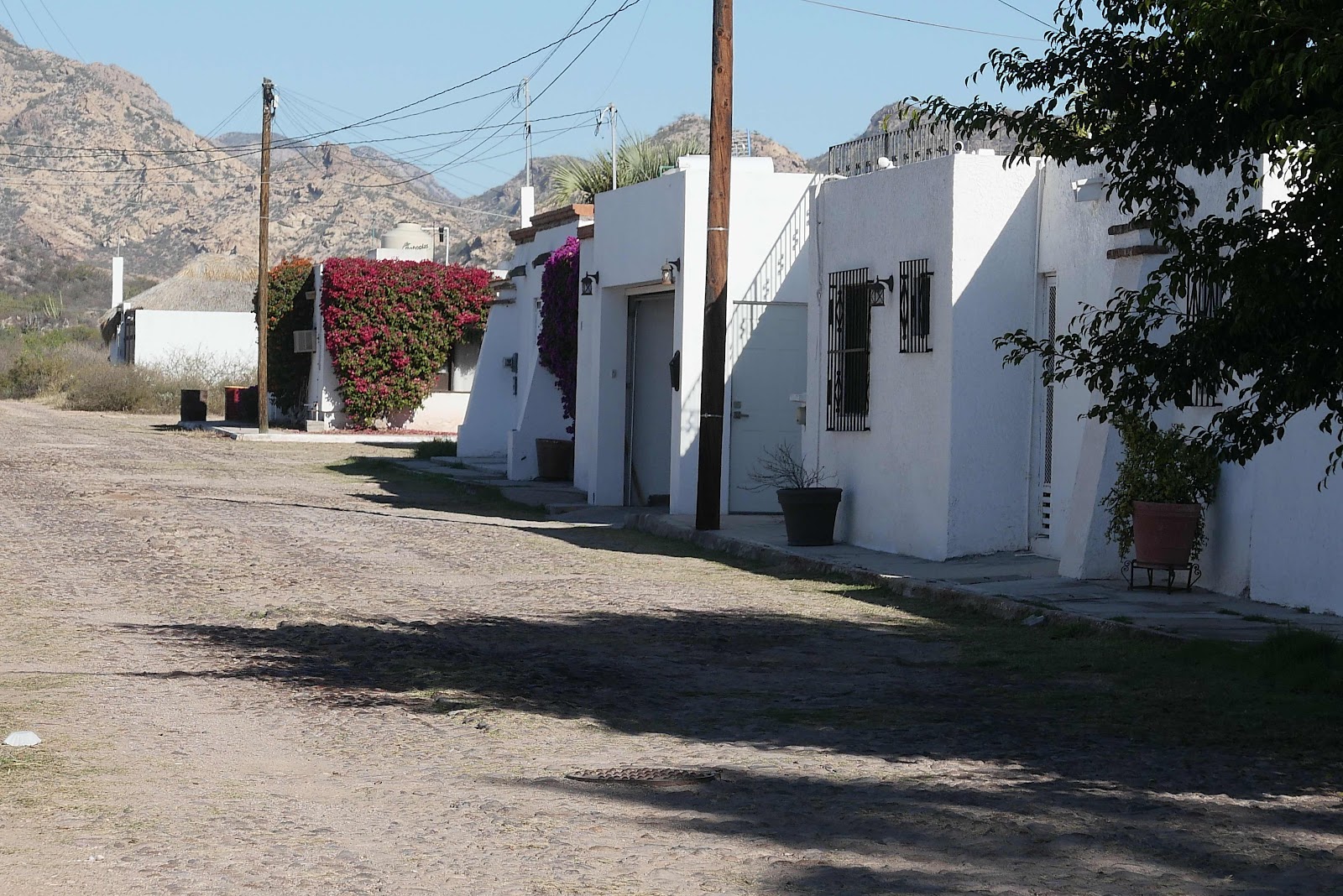 This is the big white sign we managed not see first time around. Hard to miss really isn’t it? 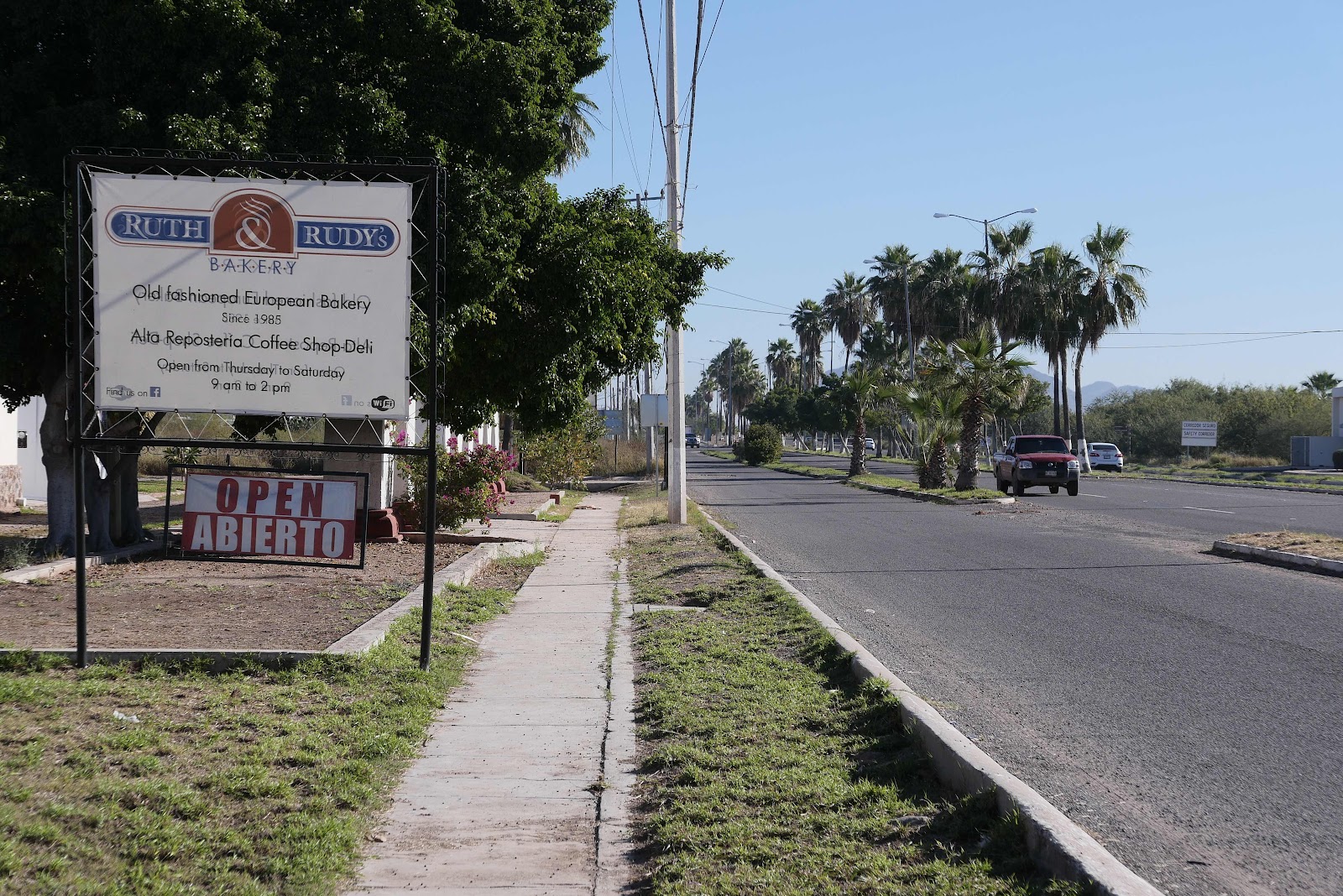 Back at camp we found ourselves buried in a fog bank. It was summer in San Francisco suddenly so we retreated to the bedroom (the back of GANNET2) and took a nap with Rusty curled up on my legs. 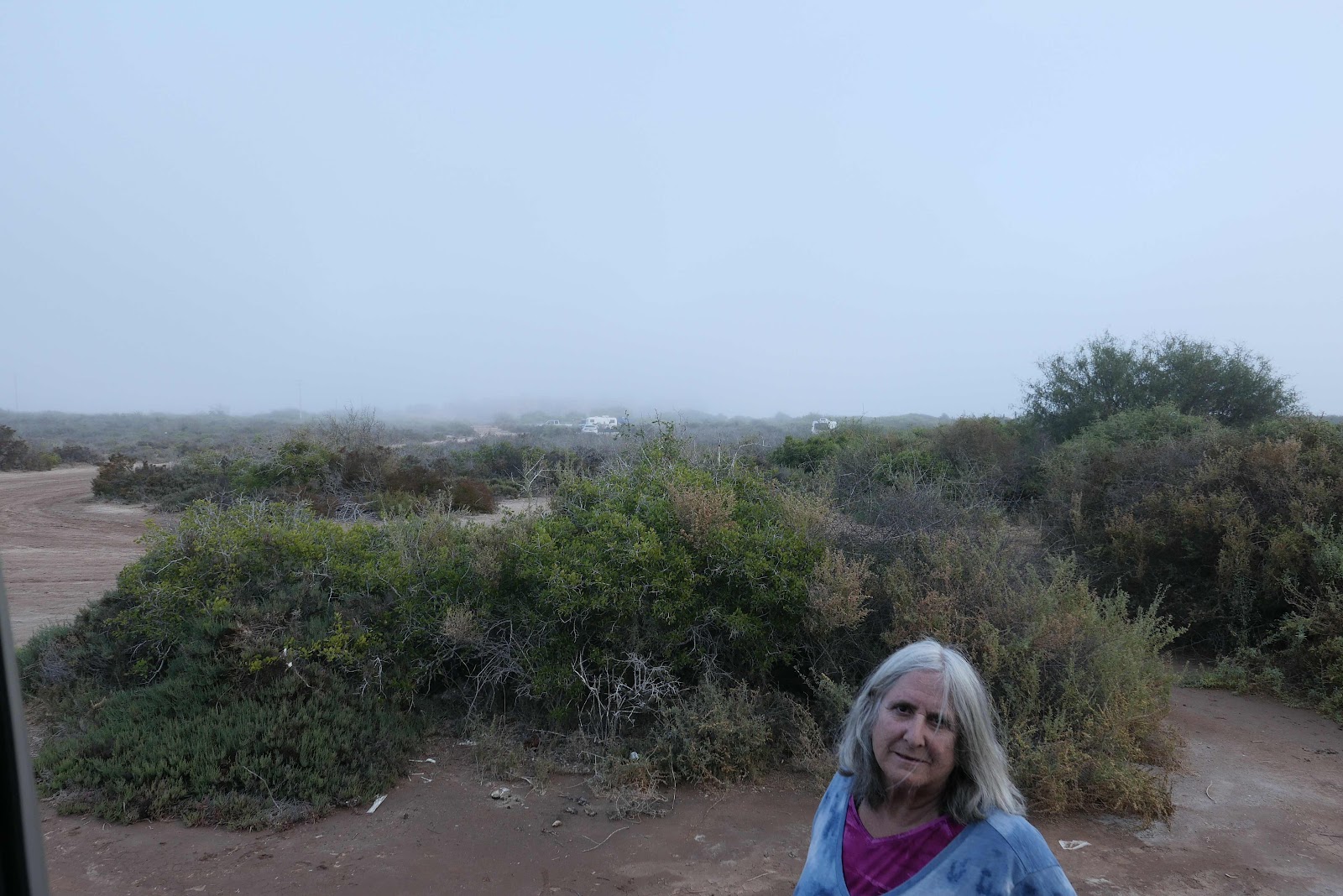 We went for a walk towards sunset. The fog lit up the sky and hung low over the water. The breeze had died down but it was cool and damp. 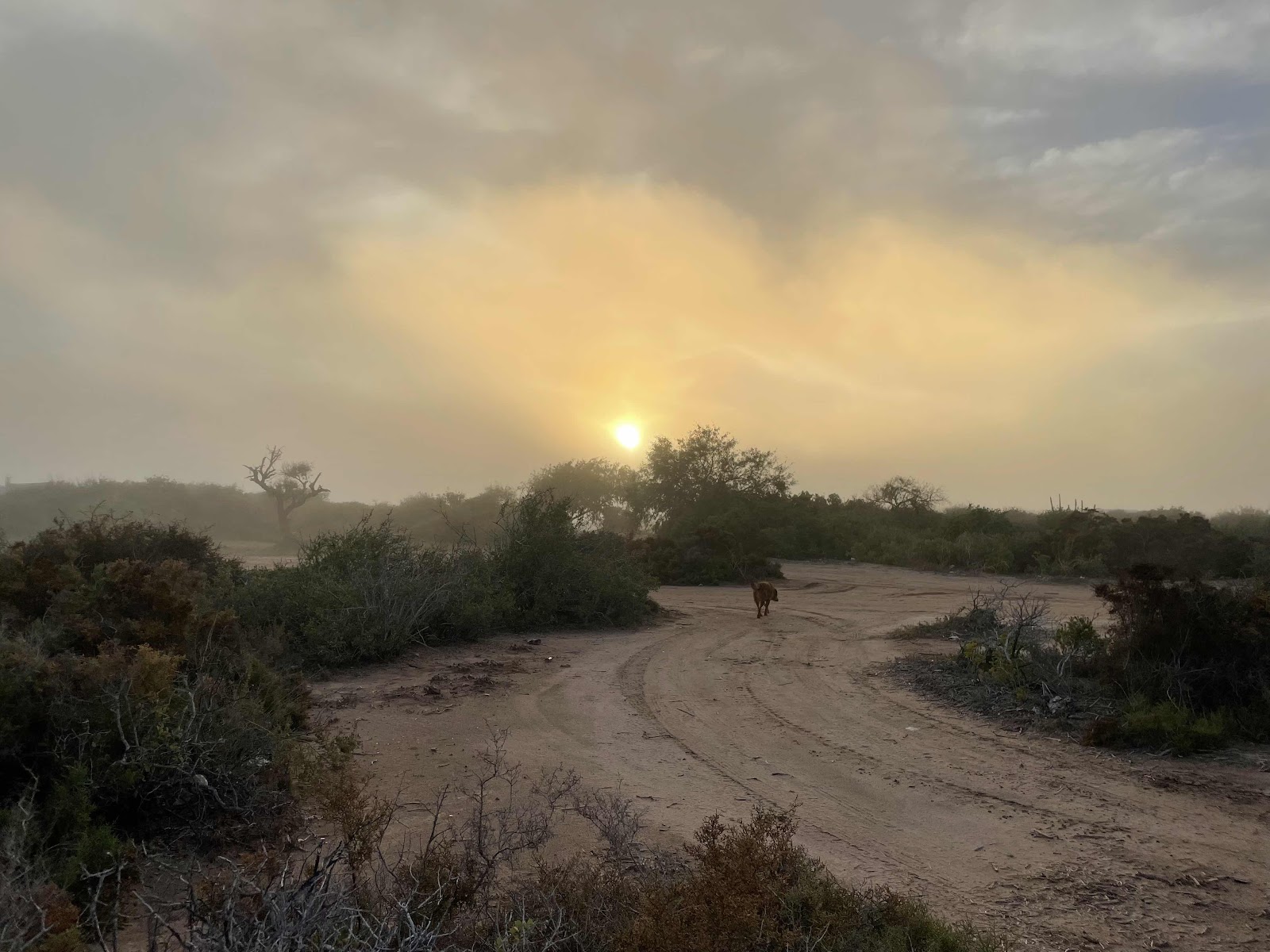 Layne had met Alejandro in his pick up and came back to the van with a quart of fresh squeezed orange juice ($4) and more shrimp than you should be allowed to eat ($14).  Weird combo but then Ron came by with fresh flour tortillas and we all nibbled those like a snack. Rusty loved them.  He sat in front of Ron and stared until he got another one. Layne gave half the shrimp to Ron who wandered back to his family’s camp dreaming of grilled shrimp. Simple things light your day out here. 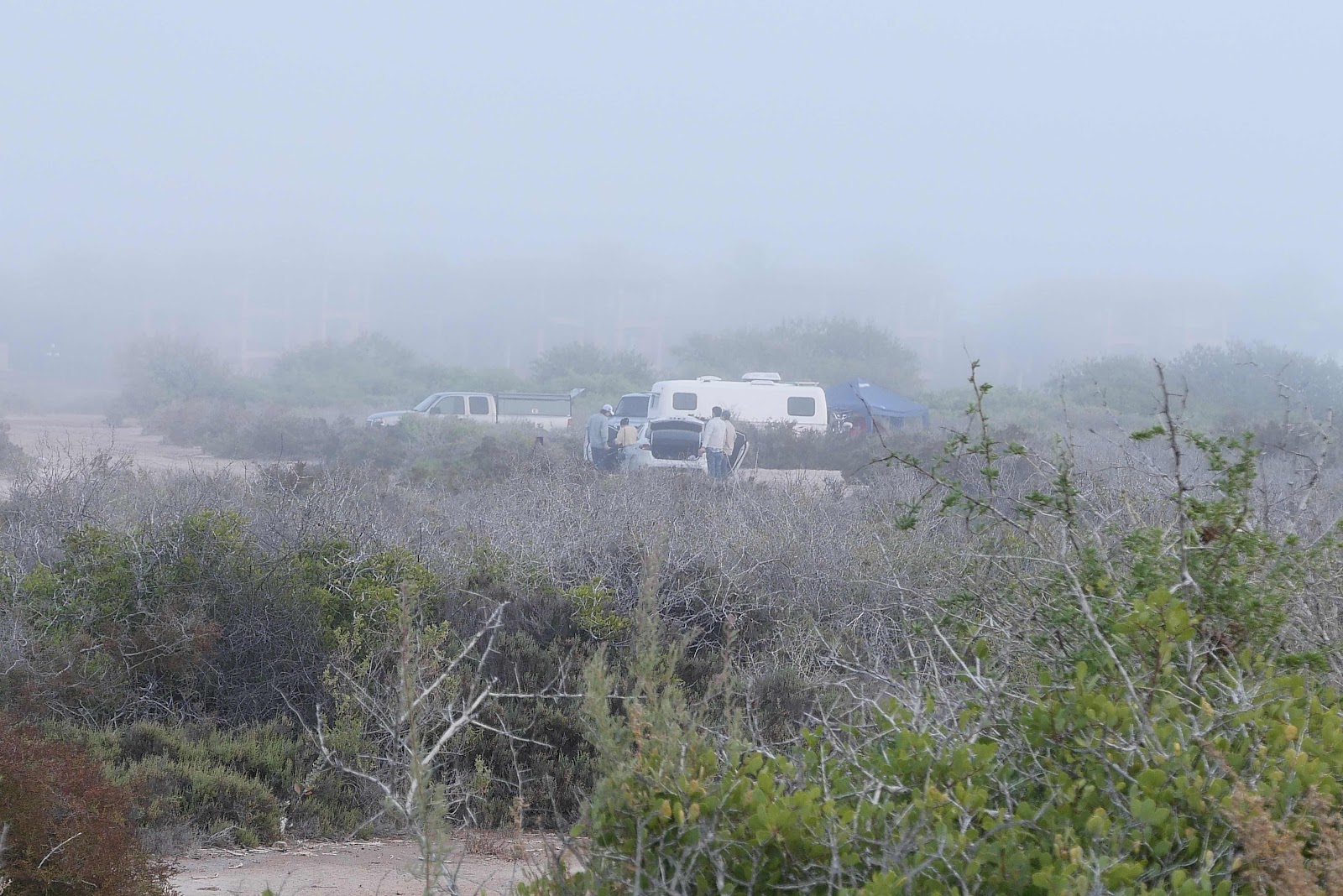 I saw Alejandro’s red lights later as he finished his rounds of the RV campers and the condo residents and he drove home. 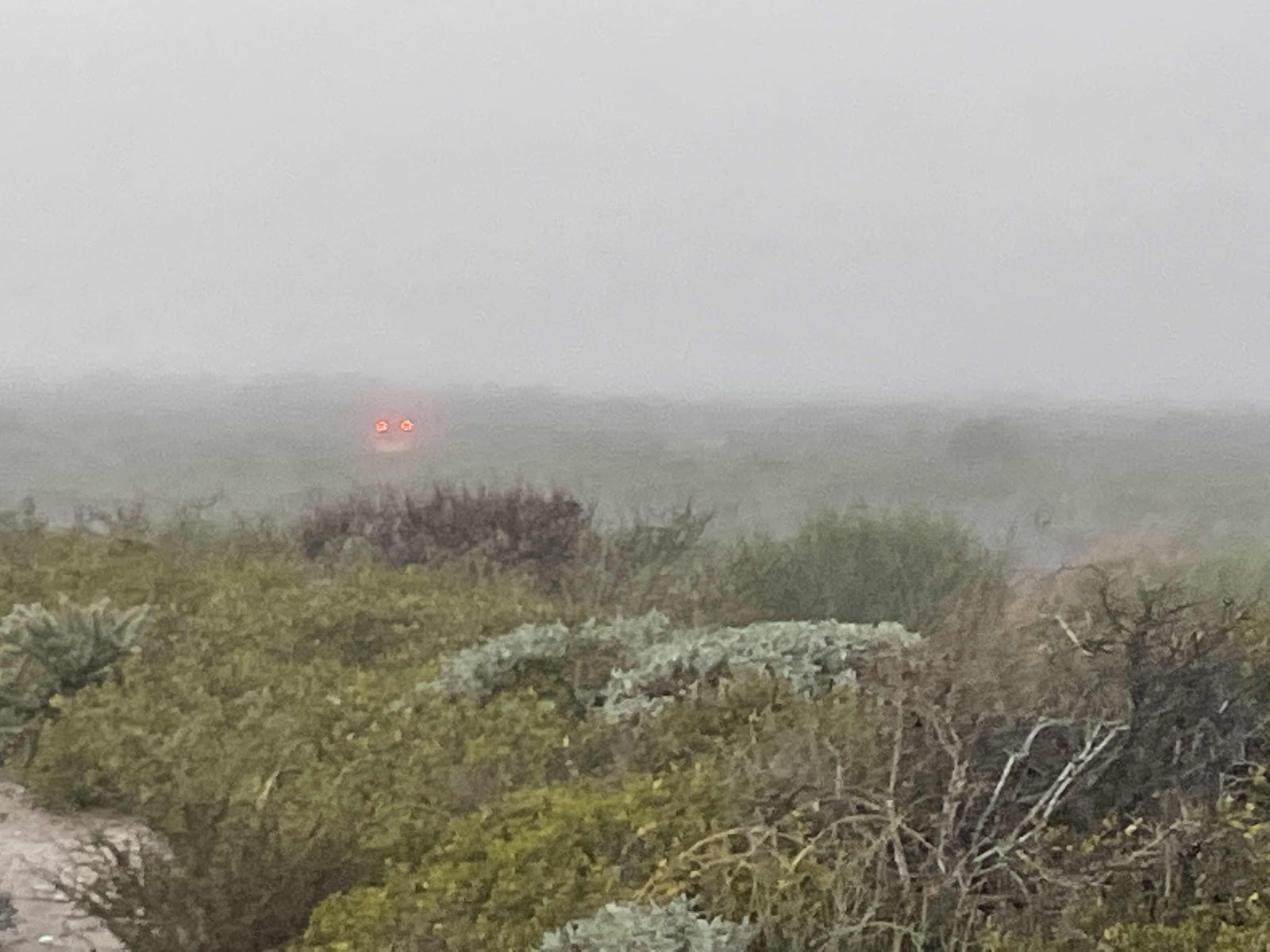 Sunset was muffled by the fog but some colors broke through. As night fell the clouds lifted and we could see the sliver of moon. We retreated inside to get out of the chill damp. 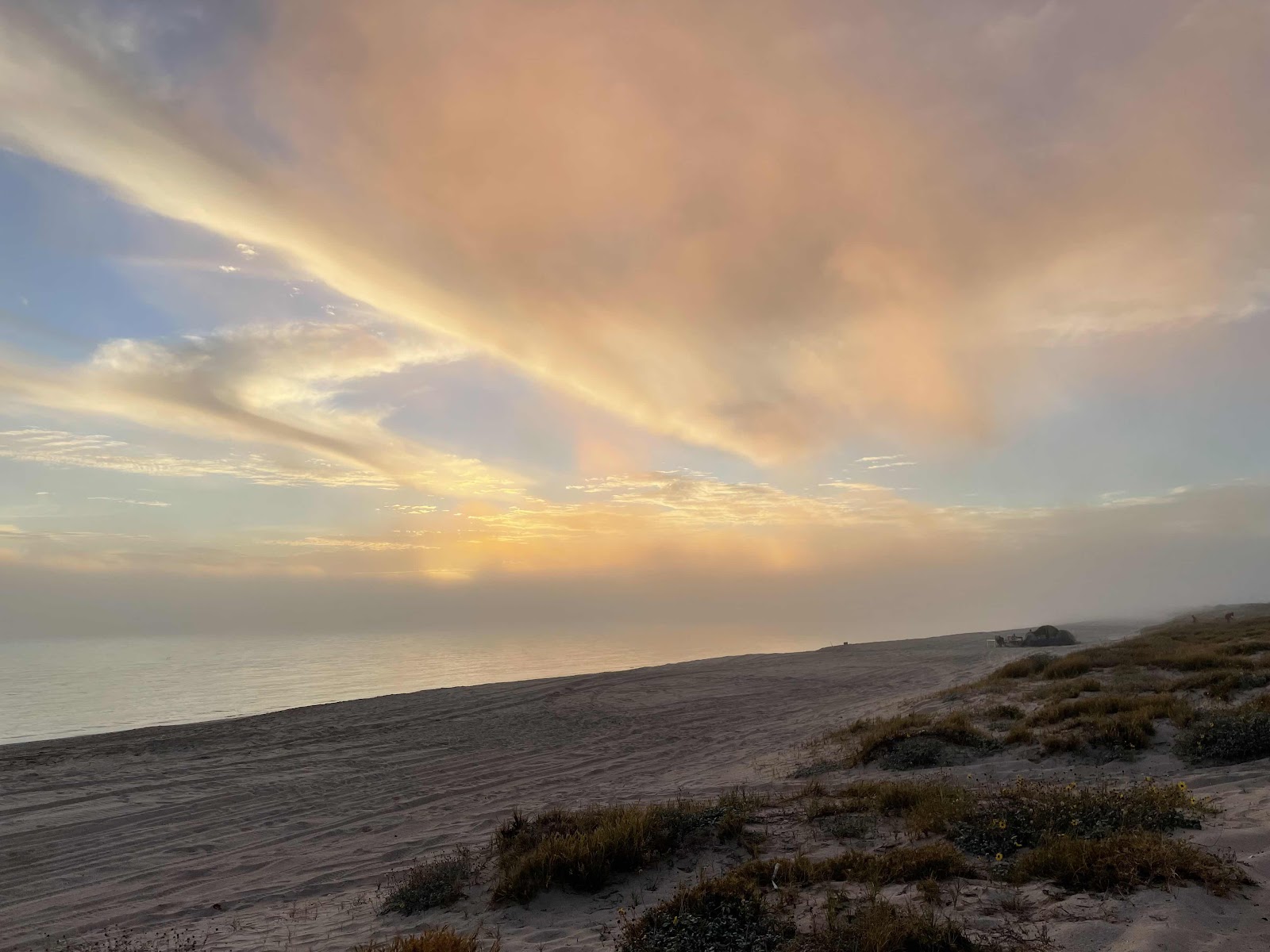 Layne made an appointment Monday afternoon to get her teeth cleaned ($50) in a dental office as spick and span and English speaking as any she has seen in the US. 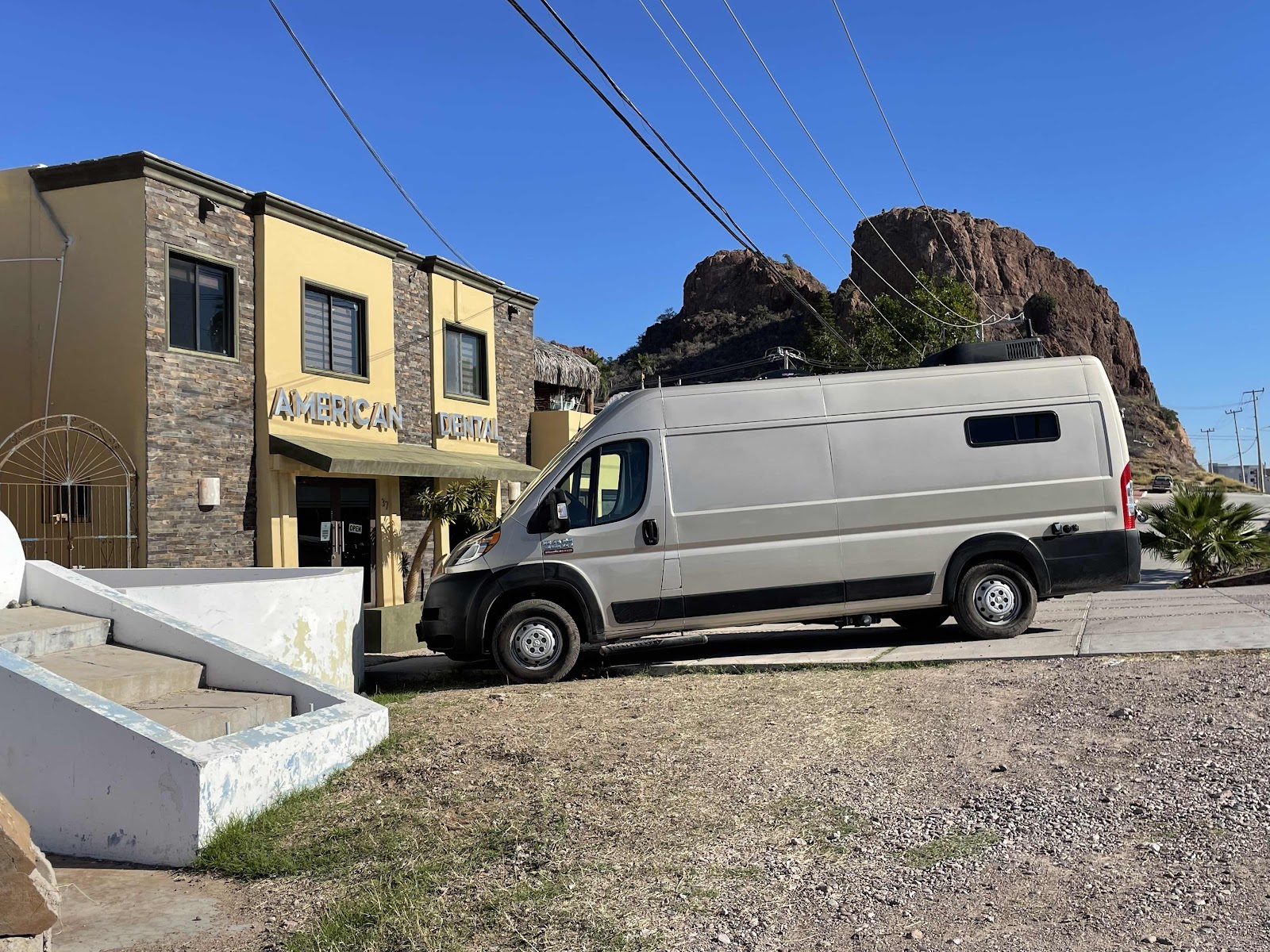 Mexico may not be as exotic or strange as you think it is. Just another way to get through the business of living that we all face. Friends in Key West sent us a text reminding us the weekend was starting  for working stiffs. Really? Good to know, I suppose.

Posted by Conchscooter at 2:00 AM 4 comments: