It started yesterday and ends tonight and not a minute too soon. 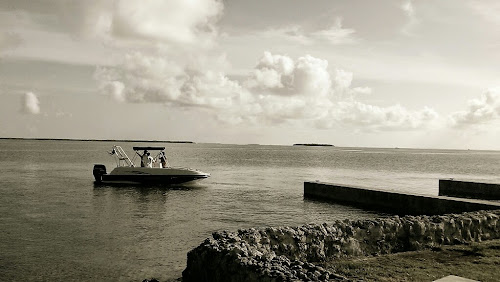 I have been feeling under the weather for a couple of days and spent most of Tuesday sleeping and chewing ibuprofen while feeling sorry for myself. I worshipped briefly at the porcelain altar and called out from work. It was in all respects a day best forgotten. 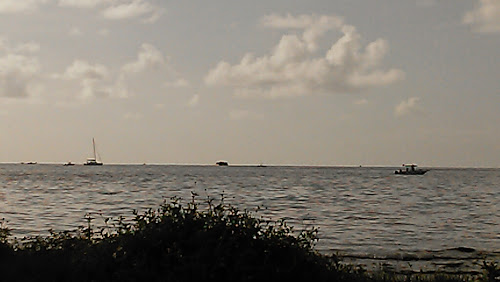 By the time I resurrected myself Wednesday, the bed a nightmare nest of twisted sheets after a restless period of unconsciousness, Cheyenne was trembling in anticipation of her walk. Such was my state of mind I had completely forgotten about lobster mini season and only remembered as I approached Big Pine and saw the highway lined with cars and the water filled with boats. 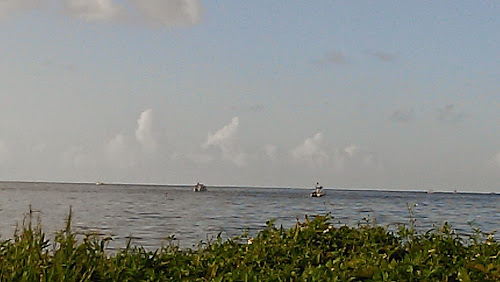 I have a plan to one day ride to Maine and eat a lobster roll which consists I am told of cold lobster and mayonnaise wrapped in a hot dog bun. People say it is delicious but I have to wonder. Lobster is a delicacy so I o end up eating it from time to time though I cannot imagine spending a perfectly good morning chasing lobsters underwater. 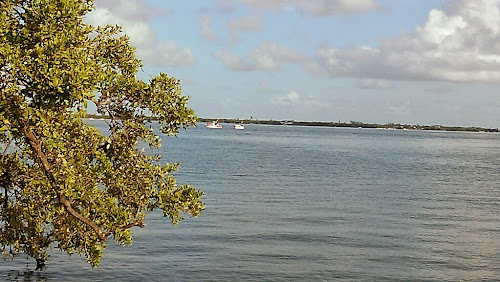 Mini season is a two day grace period for amateurs to go out and blunder aroud and see if the can catch legal sized lobsters in their natural habitat. Next month commercial lobster season begins and we will hear endless stories of too much rain, too much wind, etc etc explaining a poor harvest ad igh prices. Fishing is like fading I that cndrions are never quite right. 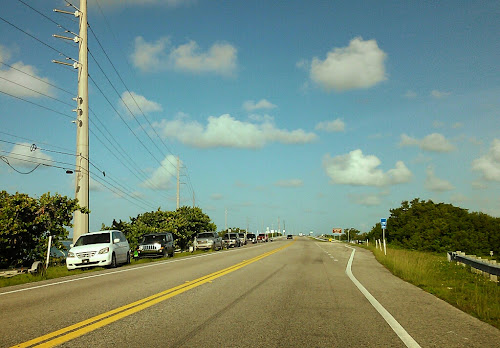 So these two July days see thousands of amateurs with only the vaguest knowledge of local waters and a tenuous grasp on the rules invade the Keys and get first dibs on the much sought after Florida lobster. Which some people say is much inferior to the North Atlantic version but on that I have no opinion.

Like any self respecting sport lobstering requires manly equipment, big trucks, big boas and lost of paraphernalia. So when I see these cast trucks towing huge trailers I wonder what chance do the little ouster have? Quite a lot it turns out as every year one or two less than capable divers end up dead. 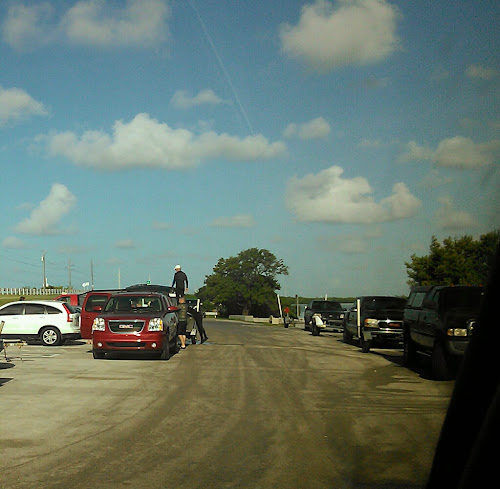 Not everyone has the wherewithal to bring a boat but nothing daunted they set up camp by the side of the road and jump in anyhow and scrape around looking for te tell tale anenna of lobster lurking under rocks. There are limits on where exactly you can hunt including staying offshore a certain distance and not hunting in canals but enforcement is a huge task. 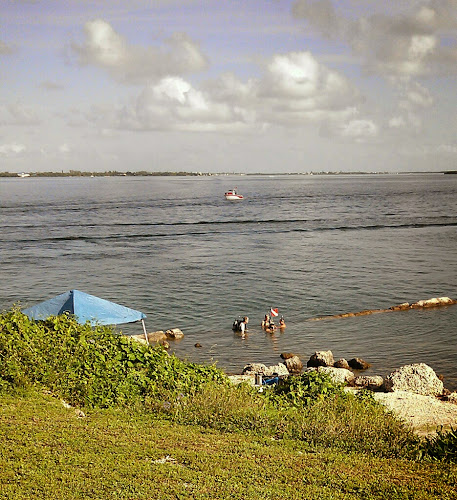 I tried to induce Cheyenne to take a country walk away frm the water but she was having none of it. My perverse dog wanted to walk by the water, perhaps for the breeze, perhaps for the bait that fishermen drop as they angle. It was a good plan, she hunted back and forth amusing herself while I stood on the slope and watched the busy boats come and go. Honestly I wasn't in the mood for a sturdy walk myself. 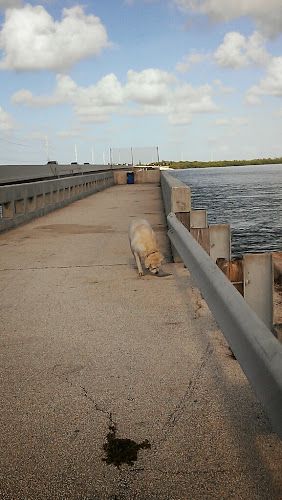 It was a beautiful day to be out on te water and I regret tha 2013 may be another year when we keep futzing around on land so much we don't get the skiff in the water ourselves. 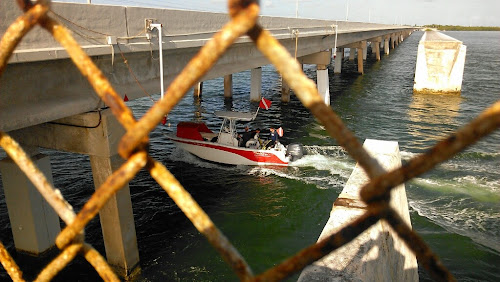 Lobster mini season s one of those times in the Keys when you have to assume everyone is a little less focused than usual and one must drive accordingly. I tried sitting in my folding chair with a book -Aurelio Zen by Michael Dibdin is my summer read this year- but Cheyenne with her usual precise sense of timing decided she wasn't going to amuse herself or leave me alone so reluctantly I landed us in the midst of the fray. 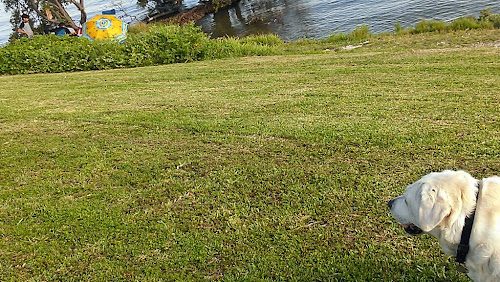 It's an odd business really, you can't spear them you can only tickle the to persuade them to come out of their lairs. You can't use compressed air, you must rely on what you carry in your lungs. You can only take lobster with tails of a certain length. 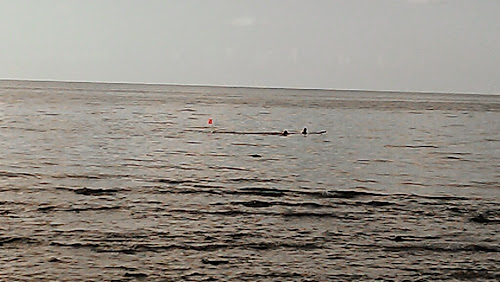 Imagine. A lobster will live 120 years if you leave it alone. 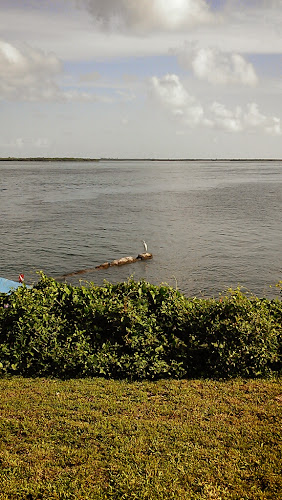 Locals maneuver their way between the busy keen amateurs. Some sit on the rocks, above, and watch, while others, below, go about their business as usual. 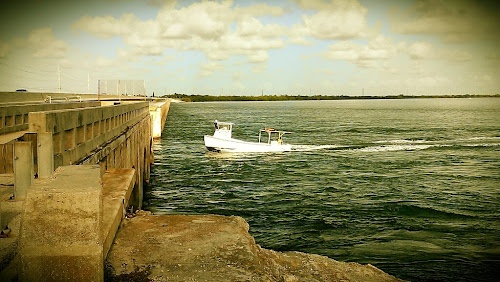 It was, in any event, a lovely day to be in the Keys. 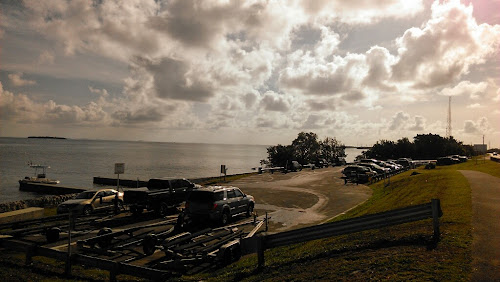 I spoke with a Monroe county detective who was working with a Fish and Wildlife Officer trying to keep lobster hunters in line. "Thirty years I've been waiting for them to ban mini season, " he said with a sigh. I was anticipating the usual chaotic night in Key West with sun baked dehydrated hunter gatherers recounting their exploits over several too many drinks...FWC the yellow tag says. They were everywhere. 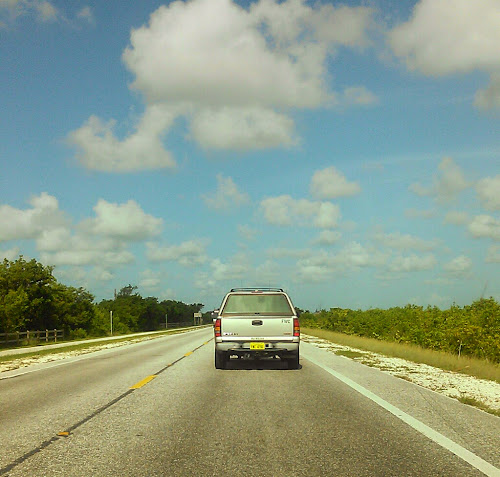 Last weekend it was Hemingway Days and now it's lobsters and next week it will be something else. It used to be that summer was quiet time but not anymore. A few people still refer to "season" meaning winter but It hardly seems to apply anymore. Lobster hunting is one more way to spread the money around so it will never be closed down. From the Citizen: 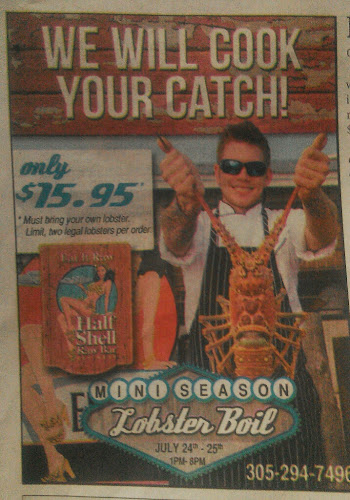 It' will be over soon and quiet times will return, and as they go maybe they will take the rowdy kids screeching about lobster in the rental home across the canal. That would be nice.