The rain stopped, the roads were dry and I had to take my lunch break before two o'clock as the rest of the night there would only be two dispatchers and we can't leave our desks when just two of us are running the room. I wasn't sure what to do with my break so I figured a walk was in order. I rode down to the Village to get some peace and quiet. 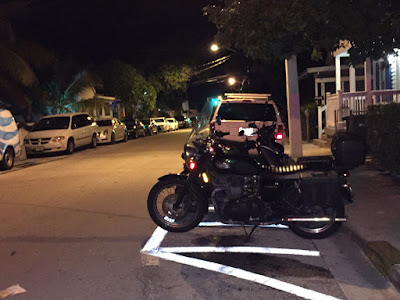 I've been riding the Bonneville exclusively lately as the winds have been honking and riding the Vespa in a strong headwind is a pain, and I have been happily trundling about with my saddlebags in place after my trip to Orlando last month. As rain has been dropping in on us unexpectedly at all hours the saddlebags, which are water tight, have been quite handy to store stuff out of the elements. So they stay on for now, especially as lane splitting in Florida isn't an issue. 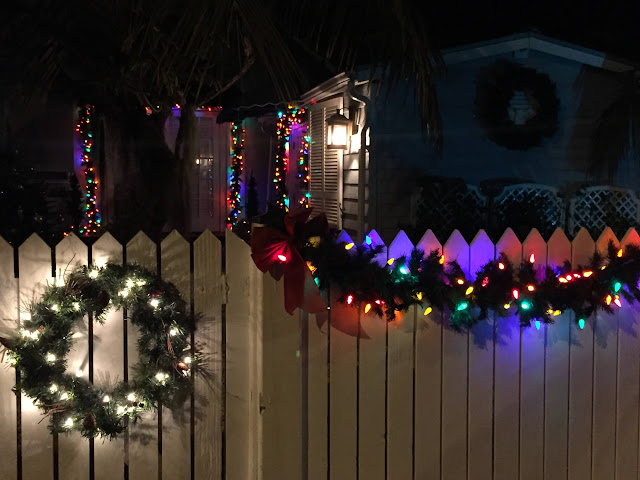 Bahama Village has traditionally been set aside for Key West's African American community which kept the white part of town close to the harbor on the northwest corner of the city. Development being what it is downtown anywhere is  priceless these days and Bahama Village is desirable for anyone who feels the need to be in the heart of downtown. Yet the community hangs on in the midst of the developmental ferment. 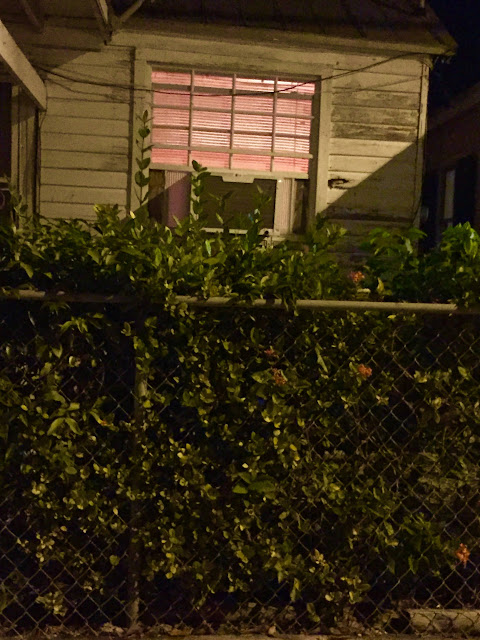 Some people make Bahama Village sound like a ghetto, fearful of the danger perceived on these streets. I find that attitude to be at best odd and at worst offensive, but we live in a  time when racism is denied though its worst traits are often displayed unconsciously. Perhaps I live some unusually sheltered existence but I have never been accosted threatened insulted or annoyed in Bahama Village. I wander around the entire city at will at all hours and frankly the fuss some people make about being in the Village after dark shocks me. 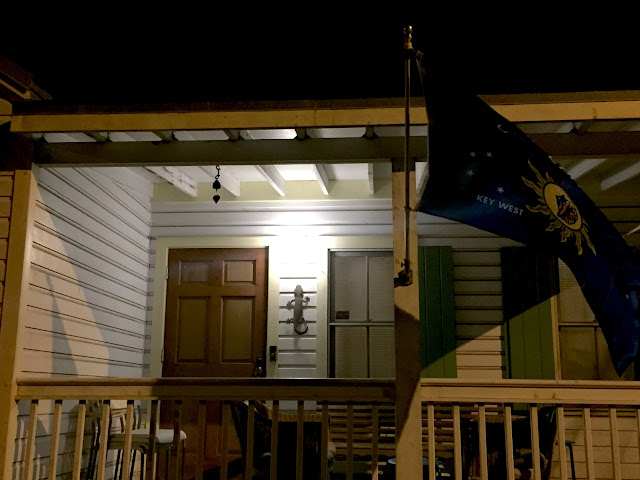 Many years ago my wife was a brand new juvenile probation officer in Key West and their office was on Villa Mill off United Street. We were living on our boat and my wife scooted to work every day on her purple Honda Elite. Her supervisor gave her a number of cases in the Village and warned her darkly to take a police escort to check on her charges. After a career as a California public defender dealing with murderers and all the rest, my wife shrugged the warning off and became a frequent sight buzzing around town, including the dreaded Village on her purple Honda. And to this day she meets former students and probationers who greet her cheerfully with nary a shiv or a rude word among them. People really do need to rein in their prejudices. 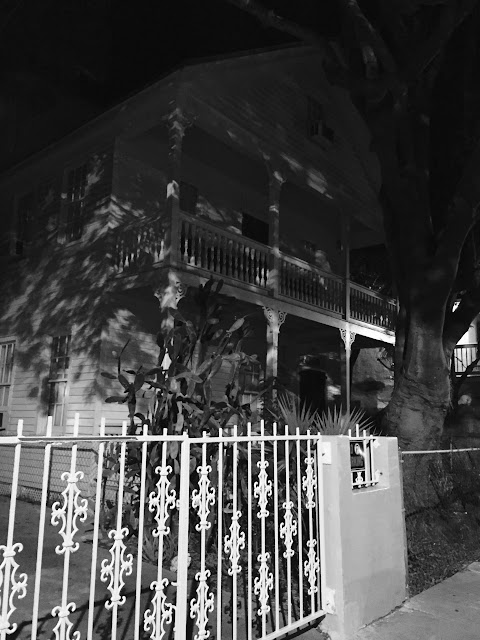 Personally I enjoy the architecture and at night there's no one around, the pools of light make things look slightly more mysterious than bright sunlight and I get to own the place for a very little while. I can walk head in air and act eccentric and there's no one to see. Even the neon at Blue Heaven was turned off: 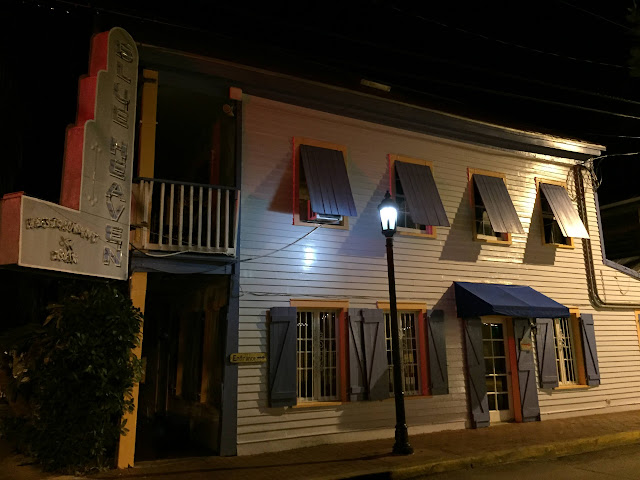 I have been watching Black Sails on Netflix and though I enjoyed the first season I think they have talked me out of a third season. Season Two shows off the most neurotic talkative pirates the world has ever heard of. All they do for hour upon endless hour is talk like the cast not of a pirate show but a soap opera melodrama. My exercise routine is taking a hit as a result. The show is shot in South Africa and the scenery is spectacular and believable as 18th century Bahamas but these bloody pirates never stop talking and hardly do any sailing or fighting. And the ships are incredibly realistic (that's where they do a lot of their talking. Though the captain's cabin is far, far too large and luxurious). The language is also grossly anachronistic which I try to overlook but a pirate talking to his wench about their relationship sounds totally daft. And her telling him she knows what he is feeling is equally ridiculous. And then they throw in a few too many "fucks" to sound like hard core tough guys. And they talk about pieces of eight as gold coins, and value them in dollars even before the US existed and the amateur historian in me gets turned off even more. Too bad because it looked like a fun series spoiled by too much chatter and anachronism. 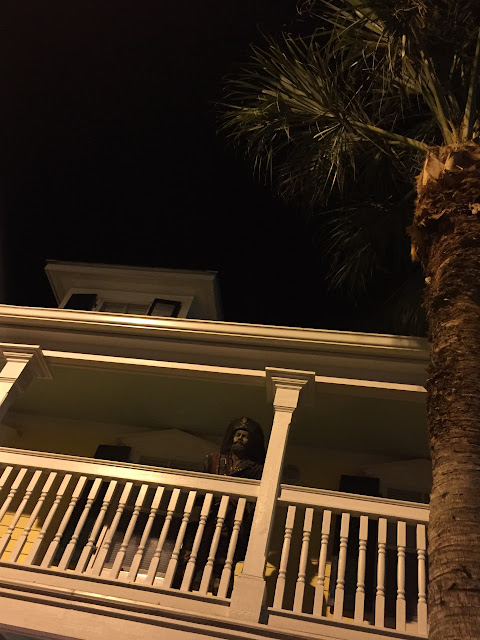 And back to Bahama Village where I spent some time loitering unmolested except by the sight of these ugly plastic signs: 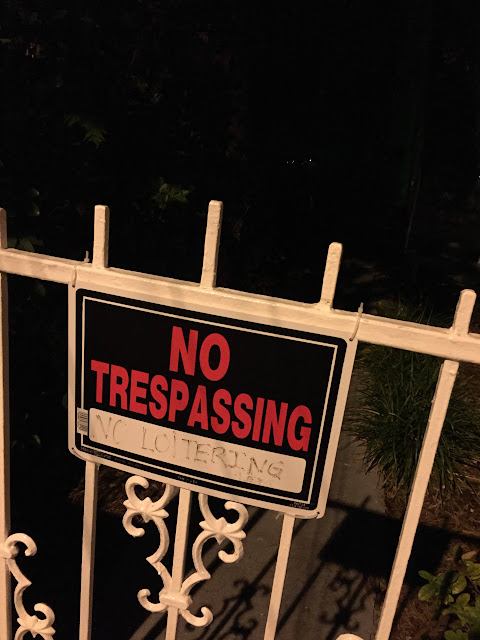 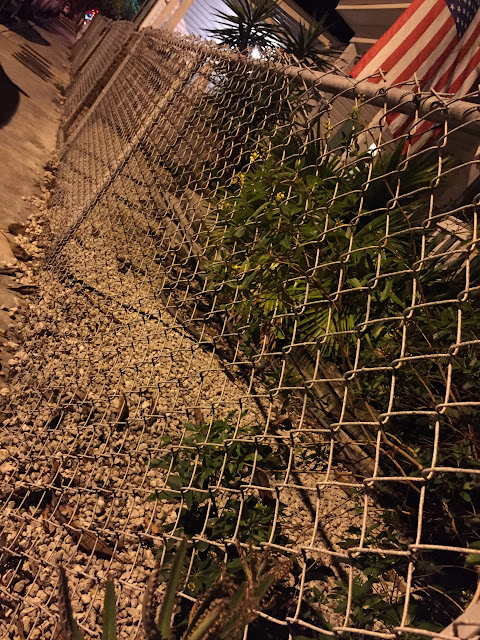 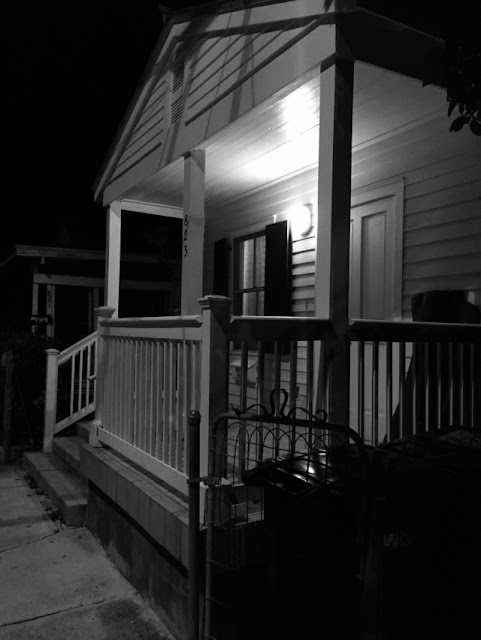 The bike rack looked like a chaotic jumble but in point of fact a sober bicycle rider could extract her or his ride quite easily though from this angle it looks impossible: 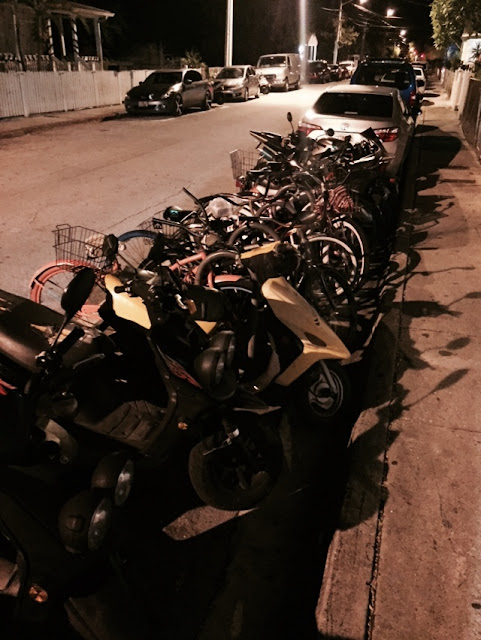 The fact that Key West has tons of free parking for two wheelers is one big mark in its favor in the transportation stakes. The odd mysterious half lit view is another. 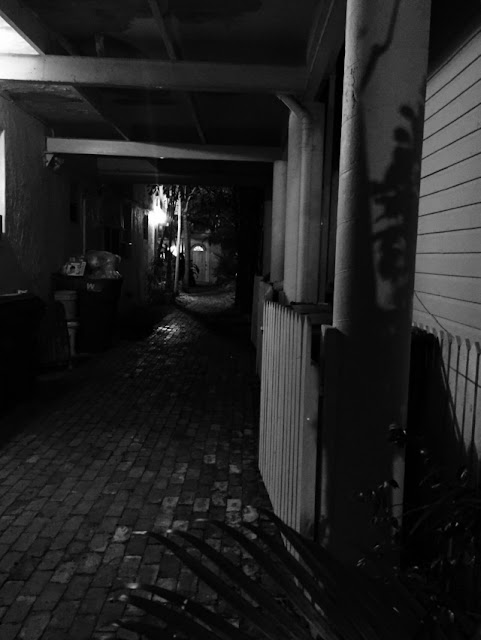 More highly sought after plastic advertising banners  enhancing this rather cruddy old wooden structure. Copious amounts of garbage at the base are a fact of life in a  tourist town not remotely connected to the concept of recycling. 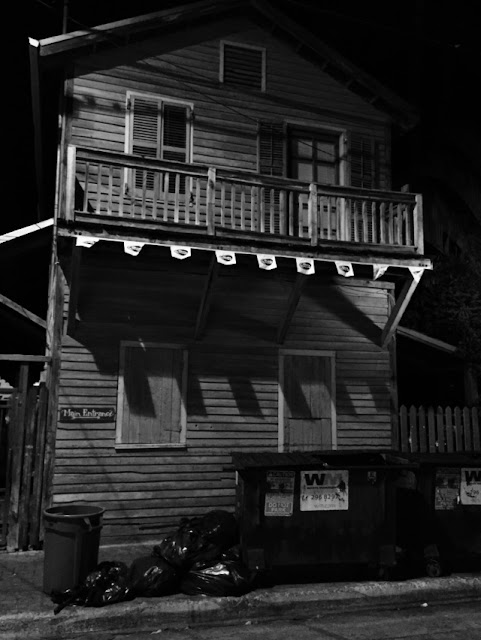 There was a county-wide forum on climate change recently and what to do about it.  I wonder what they will think to do. None of the pictures in this essay were taken at more than say 3 feet above current sea level.
Posted by Conchscooter at 12:00 AM No comments: