My wife the impromptu tour guide decided that we would not have plumbed fully the true attractiveness of little Chattanooga unless we went to see the Tennessee Aquarium, a place of wonder Trip Adviser assured her. I wasn't so sure but in the end after we dithered about for a while we easily found covered parking to keep Miss Cheyenne cool and comfortable in our absence, so in we went, at $25 a ticket. 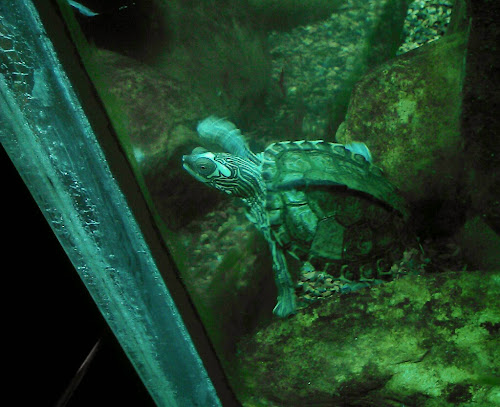 The structure is impressive when seen from the outside. We took a run across the bridge to see the other side of Chattanooga and while there engaged a young woman in conversation on the subject of her perfectly preserved Bajaj Indian built scooter of which she was inordinately proud, as she should have been. 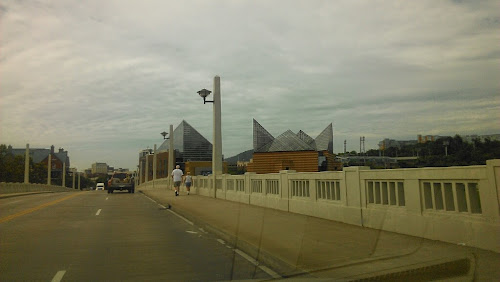 I did rather wonder what we might find inside this magnificent structure, this is the Bible Belt after all as this tour bus reminded us, had we forgotten. In God We Truss seemed a rather orthopedic stricture to me, but I am far too literal as my wife never ceases to tell me. I think they meant that they were full of trust not of hernia supports. In any event I did rather ask myself if I was going to be subjected to Noah's Ark inside the aquarium. 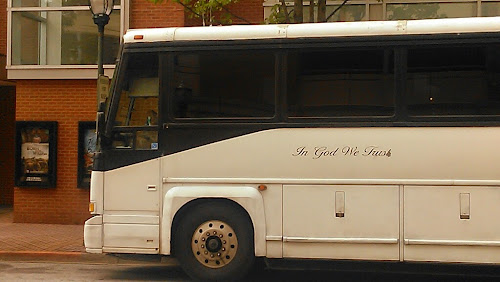 The plaza in front of the place was an absolute riot of Dali-esque melting sidewalks to nowhere and concrete pavement twisted like pretzels. 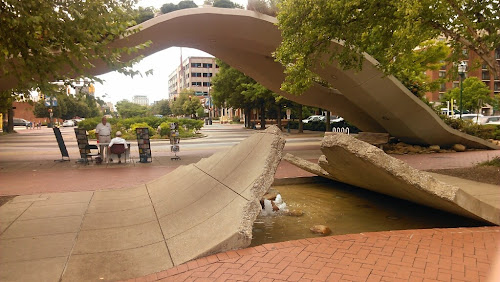 Watching families playing with the altered reality while my wife was off buying our tickets started me thinking this might be a very worthwhile visit after all. The exterior promised a very unusual interior. 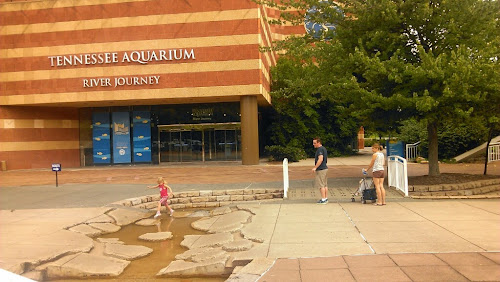 Up close one could see the glass pyramids were some sort of biosphere. 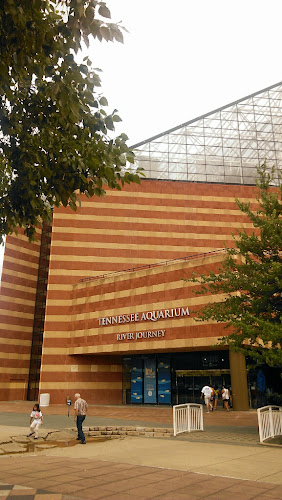 Inside Ranger Rick, some sort of Raccoon character was teaching young minds about the merits of conservation and wilderness and stuff.  It was a rapt audience. 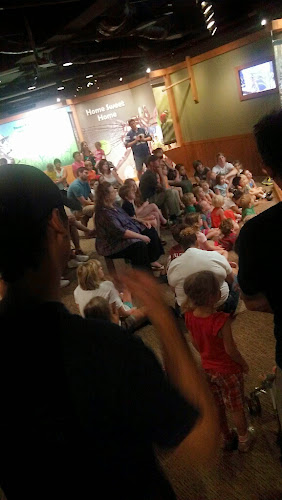 We had decided to take the river tour as neither of us had ever been to a freshwater aquarium before, but first we had to check out the seahorses. It was clear this was a first rate exhibition hall, no expense spared. 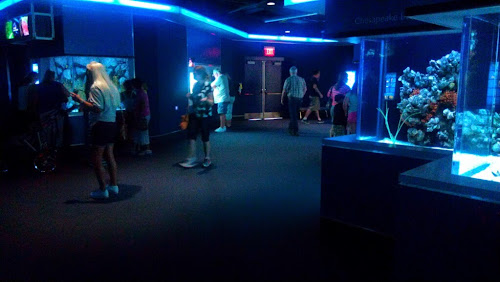 Clambering upstairs we enjoyed a view across the river. I loved the informal viewing area created very simply out of two glass walls. Too bad there was nowhere to sit, but the absence of places to pause and contemplate was my major gripe about this place. The exhibits deserved more time and some quiet contemplation. 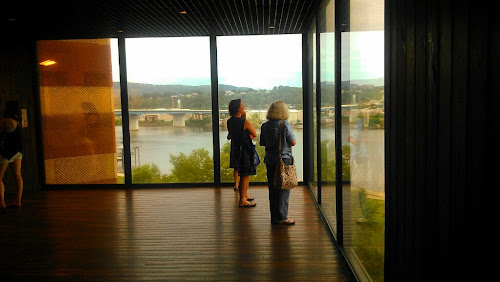 Inside one biosphere was a very popular exhibit. Habitat destruction (home building to you and me) has been wiping out otters in Tennessee and so many other places. They are raising them here for release into the wild. I dare say the youngsters and some of their parents who watched these delightful creatures may be moved to think differently about habitat destruction after seeing them here. 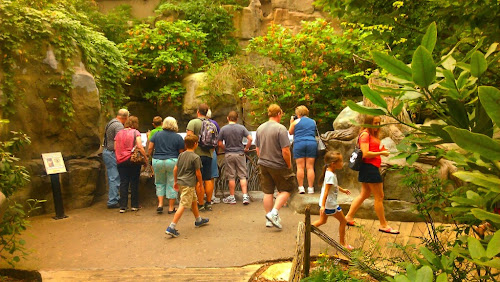 Or maybe not. We do have a penchant to follow the imperious demands of constant growth and  otters be damned! 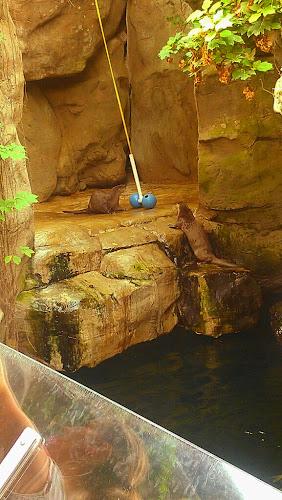 The interior of the aquarium was filled with huge tanks of freshwater fish. I sat on one of the all too rare benches and watched for a while mesmerized by the circling fish. 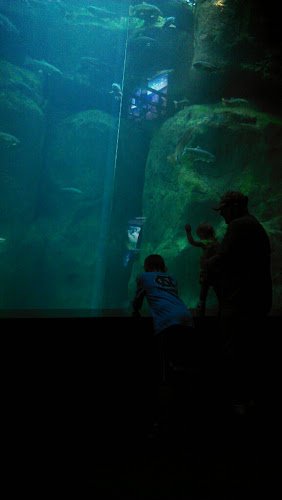 I hope they really do have very short memories as they deserve to be out in the wild rather than restrained in these tanks swimming endlessly in circles. 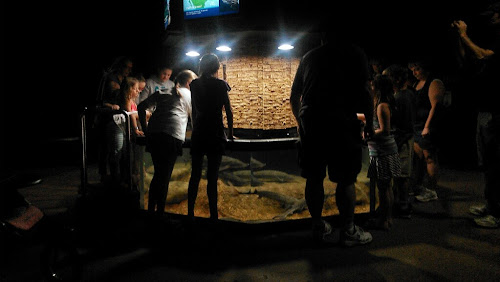 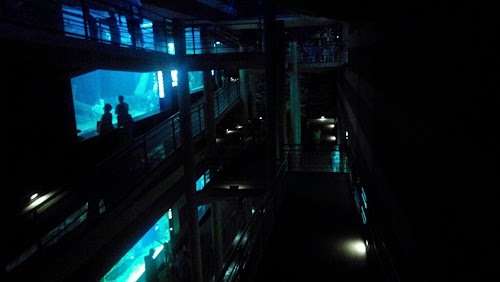 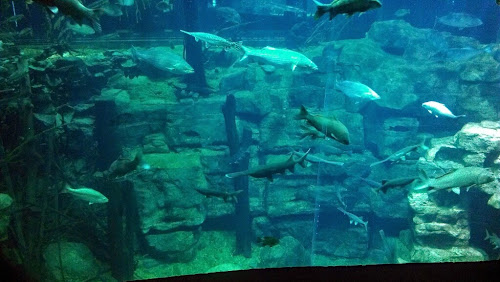 The worst for me was watching the frantic scrabbling of turtles imprisoned by the invisible plastic walls of their tanks. I hope their captivity isn't in vain and people take the time to learn and be educated, not just amused. 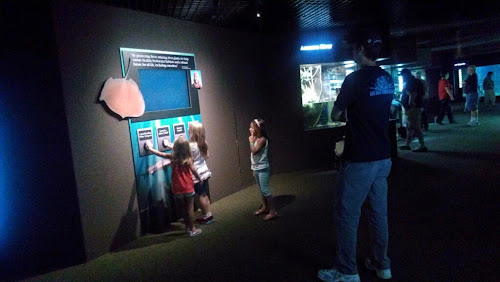 This cabinet  I loved. 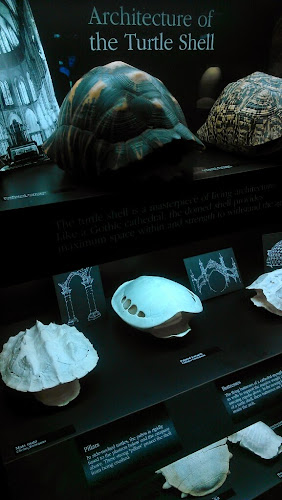 And this was exceptional also, aquarium employee and musician Matt Downer playing Appalachian blue grass tunes.   Matt Downer also can be found on YouTube if you want to hear his fine playing. 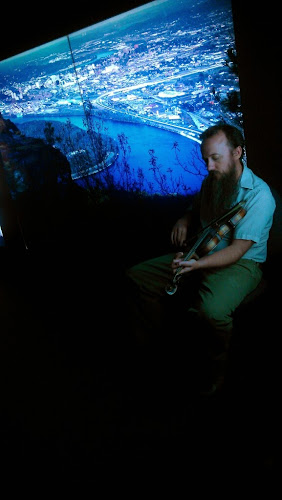 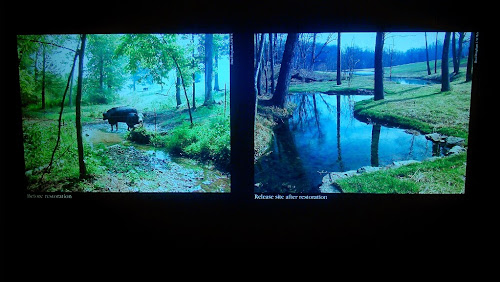 It was a surprisingly effective and rich experience strolling through the place. There isn't unfortunately much printed material on the exhibits so you do have to spend a bit of time dialing phone numbers with your cell phone to hear recorded descriptions which I found tedious. But there again I am a reader... I can't wait to go back. We might even have the time to check the Ocean Exhibit next time.