This is the time of year when in defiance of the norms of Northern Hemisphere living, life calms down a bit in the Key West 911 center. Winter when the ranks of part time residents swells, along with the numbers of tourists, is when the place gets busier. The nice part about the job is that you never quite know what you are in for but whatever does happen we have a plan of some sort to deal with it and after all this time there really isn't anything much that freaks me out, which is as well as I am in charge of the room all night. The other nice part is that whatever the weather we are snug at the top of the police station. I really like my work place. I arrive just before six and the administrative staff have gone home, the officers are in briefing downstairs and upstairs the day shift dispatchers go home leaving us to turn down the lights and settle in for the night. 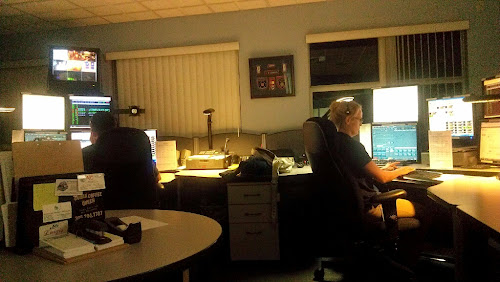 I am in one of those phases, long may it last where I am working with two people who suit my temperament and whom I can trust completely while we are at work. Nick and Shannon are both around 30 years of age and both have maturity beyond their years which makes it easy to share the room with them for twelve hours at a time. I trained them so they know how to take calls, how to share responsibilities and how to ask for help when they need it because you never know what odd thing a caller may need at three in the morning and I have been here longer than the other two dispatchers combined. I surprise myself sometimes by how much I know from years of being here.

One of the major character defects we tend to uncover in candidates for the job is the inability to sit still for twelve hours at a time. You had better know how to entertain yourself on summer nights when call volume drops off and you have only your own resources to keep you mentally engaged on those nights when the town is at peace relatively speaking. Shannon is a voracious reader while Nick is endlessly fascinated by car design and his new hobby of learning to fly. Me? I check out motorcycles and riding online. I call it a mini vacation spending a couple of minutes studying riders around the world doing something fun, in the minutes between the return to reality as one desperate call for help follows the next. I took the time to take a self portrait simpering horribly. The roof has been undergoing repairs but because we can never shut down the communications center the construction people had to rig a tarp to keep dispatchers and computers dry. Its a glamorous job but we soldier on no matter what. 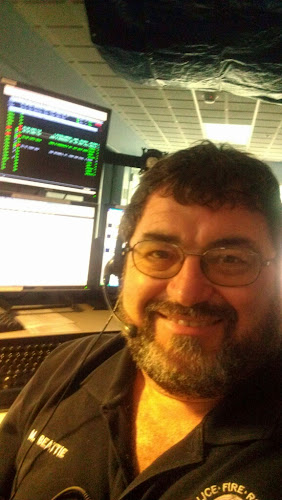 Hurricane season is upon us and the thought that one may come our way is in the back of one's mind but of course all contingency plans are in place. We haven't had a hit in several years and I was surprised to find how few dispatchers have any experience with storms. The good part about working twelve hour shifts is that we get time off to compensate, two nights on and then two nights off. somehow I have learned to switch my sleeping patterns at will which makes life a lot easier. There again I have been working nights as long as I can remember, most of the 9 years I have worked in the 911 center. Its a paradox that I have found a job I enjoy, a job that I have held longer than any other in a town that celebrates not working. It's odd but I'm probably happier being here than there: 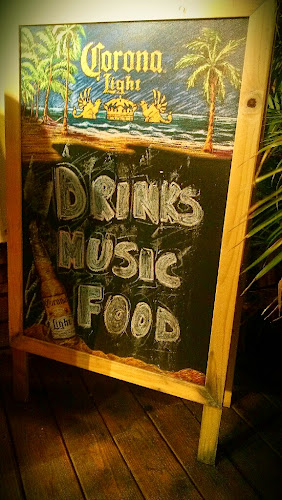 I just passed my ninth anniversary and when I think back to July 5th 2004 I really had no firm belief I could do the job let alone stick to it considering I had no experience whatsoever. Now I'm hoping I've got another 16 years in me doing this, what I hope will be my last job. In all my years of traveling and working here and there and failing to make a plan the last thing I would have expected was to find myself dealing with computers and telephones and radios and reassuring a lot of worried people from an office in a police station. I am rather looking forward to winter, when hurricane season is over and when the town is packed and we get the majority of the 180,000 calls we handle every year. Truly life is unpredictable, never quite so much as in a 911 center.