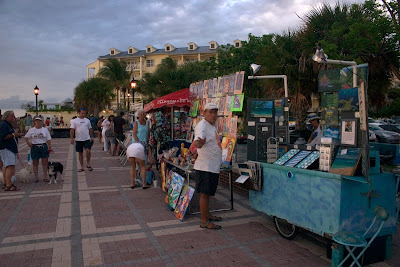 Mallory Square at sunset by GarytheTourist.
Posted by Conchscooter at 4:01 PM 3 comments: Links to this post

The Seventh Circle Of Hell


For some reason every time I open my eyes I see shadowy figures wandering the aisles of the aircraft, silently shuffling, heads down, endlessly back and forth from the pit of damnation back to their seats suspended high in the night sky over the bottomless pit of the Atlantic Ocean. The elderly Alitalia aircraft rushes smoothly along carrying us God knows where, and all the time I sit in my uncomfortable seat wondering how soon the engines will crap out as the toilet on my side of the aircraft has failed. The toilet failure was startling but not as startling as the sudden death of a worn out engine would be...

I took my turn playing the lost soul when I got out of my aisle seat and shuffled in turn to the back of the plane. The toilet door said "libero" and I pushed where it said "spingere" and the door slid creakily back like the entrance to Castle Dracula only to reveal, not a vampire, but a small boy with large brown worried looking eyes. I slid the door to, and turned my back. Twice in one day seemed too much to walk in on people peeing. Back in the Key Largo Starbucks I had found a man washing his hands. He apologized and said the lock didn't work. I tested it and it was he who couldn't work the lock. It could have been worse I suppose. He could have been holding his fire hose when I interrupted him.

The small boy came out and tugged my sleeve. I thought for one horrid moment he was luring me into the little closet to do unspeakable things to his defenseless body and I recoiled in horror but he kept tugging saying not a word and I went in. The toilet bowl was filled with dark water slipping gently to the motion of the plane and pieces of toilet paper lurched like waterlogged icebergs. The evacuation lever clunked helplessly when I depressed it and the bowl hiccuped and failed to cooperate for me as it had for the small boy who had pulled a disappearing act and left me to deal with the problem.

I saw the flight attendant fighting a plastic bag which apparently refused to die on this flight from hell and I explained the problem. He pressed the lever with the same dismal result and he thought for a second. "Perhaps I should put a note on the door?" he said as though struck by the most genial idea since the discovery of DNA. His colleagues were sitting on jump eats sipping wine holding the plastic cups delicately in perfectly manicured hands over delicately crossed knees. The manual labor of dealing with blocked toilets seemed far outside their union job descriptions so I walked past the helpless women to the other toilet.

Outside the engines continued to push the air with perfect regularity, which was encouraging because the second toilet door didn't close properly. I was buttoned up and exiting when a woman shuffled up, another lost soul looking for relief. I went back the long way to my stale coffee stained seat. My wife looked like a Bosnian refugee curled up under a blanket her nose smushed against the window. She is nothing if not adaptable.

Across the aisle a couple shared the horrid center trio of seats. She was propped up against the arm rest in a position that looked designed for torture, an aircraft pillow in the small of her well curved back. She was picking through noisy plastic sacks looking for food and opening a crackling granola bar for all the world like a bored primate in a cage peeling a banana and stretching the moment of pleasure out in expectation of nothing more interesting coming her way. Her partner looked like he was in a cold hell with a hoody over his head, his hunched shoulders wrapped in a blanket as he leaned his forehead against the seat in front of him in a futile attempt at sleep while his prehensile woman rooted noisily through her bags, feet stretched out luxuriously across two and a half seats. He was in a hell of his own making I think.

The usual relief from tedium, a movie was denied to me not only because the movie looked silly and I had seen it and forgotten it, ChristopherWalken, Morgan Freeman and William H Macy in an art heist caper, but also because my headset outlet was broken. Music mysteriously wafted overhead at odd intervals, inexplicably, a chorus of Janacek or Khatchaturian angels floating within hearing in and out at random, but my headset obstinately failed to give me sound. A party of Israelis in beanies provided a guttural soundtrack to my misery hawking and glotting in the weird Middle Eastern noise that is Hebrew. A bizarre Italian movie came on, a story of mistaken identity, amateur hit men and somewhere in it all a gift wrapped box of Cuban cigars. I read the English subtitles and translated the dialogue into Italian, my mother tongue in my head. The flight dragged on.

Ten hours it took to cross the Atlantic finally circling the brown fields and the blue waters of the Mediterranean Sea as we came in to land. Rome may not be heaven in any traditional sense but anything was better than the long dark cigar from hell hurtling through the night.

Posted by Conchscooter at 11:03 AM 4 comments: Links to this post 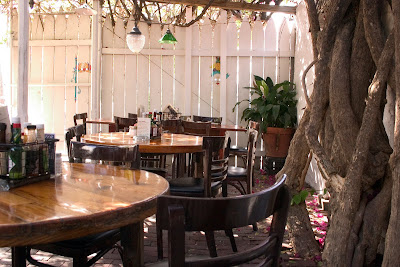 Where GarytheTourist and I first met, ooh sweet, Pepe's on Caroline.
Posted by Conchscooter at 8:01 AM 1 comment: Links to this post 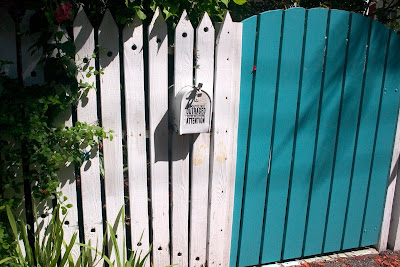 Poorhouse Lane by GarytheTourist.
Posted by Conchscooter at 12:01 AM 2 comments: Links to this post