Driving South Roosevelt this morning I spotted a car parked in the road - hard to miss actually!- and a crowd of people watching a boat maneuvering just off the seawall. It was a US Customs boat covered by a Coastguard Rigid Inflatable Boat and between them they seemed to be talking to a small outboard powered launch with two people in it. It's not uncommon for migrants to land in the Keys especially after a spell of settled weather. Last week at work we got calls from people on the beach who thought they were the first joggers to spot an abandoned Cuban chug (as the home made boats are called) washed up on the beach overnight. The migrants turned themselves in whe. They had landed and were doubtless already being processed at the Krome Detention Center outside Homestead prior to getting their eight thousand dollar welcome to the US check and the freedom to settle in their new country. These two off the beach this morning weren't so lucky as they never made it to the sand. 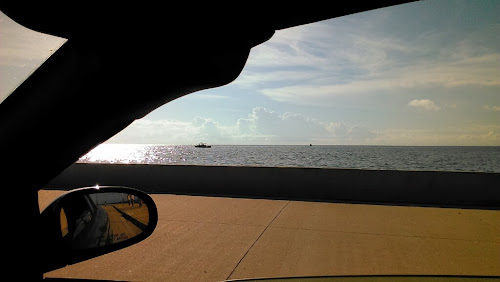 Stopping wasn't feasible for me as parking on a four lane state road isn't exactly my style and my lovely Android camera is rotten when it comes to telephotoing so the pictures aren't much but I thought you might care to see how they protect our shoreline from those pesky Cuban émigrés seeking a better life. I figured this might have been a Cuban landing owing to the large crowd of people waiting and watching. Frequently Cubans who have already made it to the US pay smugglers to bring their relatives over at about ten grand a head, but these two made it across themselves apparently and were stopped just feet from a new life. 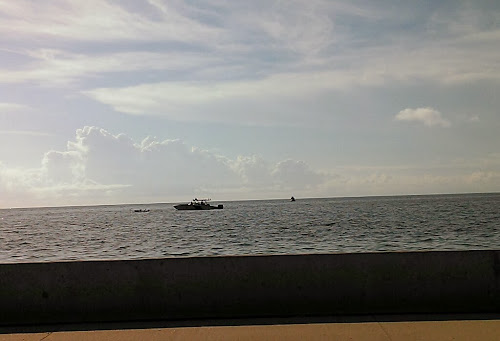 The thing is, people who are smuggled aren't supposed to get to stay if caught, but if you get across the water on your own, by raft or home made boat you get to stay if you mange to physically land on US dirt. If you get caught before then, our mariners are required by our heartless politicians to take you back to Cuba and a hot time in jail. It's called the "wet foot - dry foot policy." Really - that's the official title dreamed up by our NSA powered elected leaders (brought to you by the richest people in the world who wouldn't be caught dead on a raft in the Gulf Stream). So when law enforcement finds a clump of immigrants standing at the southern tip of Duval Street with no boat the migrants say "our raft drifted away" thus proving they weren't smuggled. The obverse of this official Cuban migrant policy is that if you are a Black Haitian on a raft you don't get any kind of a migrant policy: you get sent home pronto. May the power of the Miami Cuban Voting Bloc never grow less. They are also the people who benefit from the crazy Cuban Embargo that allows contact with Cuba to pass only through their wallets. 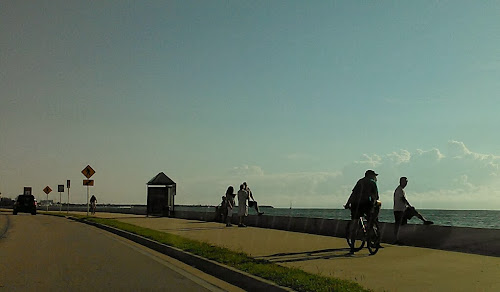 I felt bad for the two would- arrivals still on the water a few feet from US dirt where we fat Americans were playing at removing a few excess calories. Those were my thoughts as I sailed by carrying my dog in luxury back to her middle class home firmly in the US.

Post Scriptum: The last I heard they actually made it to shore where the Border Patrol met with them and released them to live in the US. All's well that ends well.

Posted with Blogsy
Posted by Conchscooter at 4:00 PM 4 comments:

I like to study maps which makes me a nerd UNLESS I act on that studying, which makes me an explorer. Which explains how it was that I got to drive across the Everglades, not on Tamiami Trail, nor yet on Alligator Alley, but instead of all that asphalt end ease I took my car and my wife and my dog here: 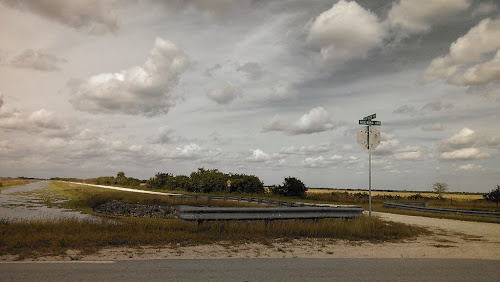 On the Seminole Reservation at the western end the dirt road is called Huff Bridge and there is a street sign, but that's all. It doesn't have a sign saying "Highway 27- 25 miles" and twenty of them are dirt. Highway 27 goes south and intersects I-75, the Florida Turnpike and Krome Avenue. Highway 27 is a useful road to know, and this dirt road knows it. 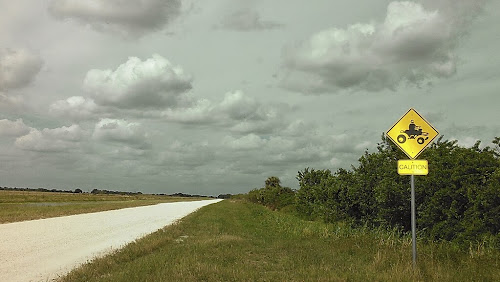 What a great road, flat straight and reasonably smooth at speeds close to fifty miles per hour. 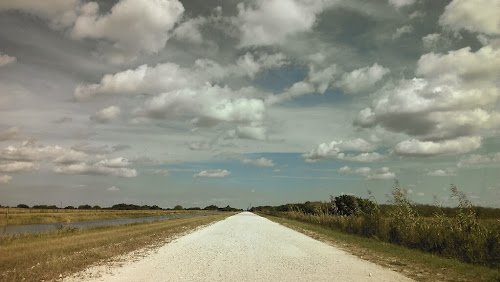 I learned years ago when riding in Africa, particularly in Niger, Nigeria and Cameroon, that keeping up a steady speed around fifty smooths out the "washboard" bumps that stretch across the roadway. It was slightly surreal buzzing smoothly along in the relative luxury of our two wheel drive, air conditioned Fusion sedan while outside the ninety degree wilderness sped by like a movie. 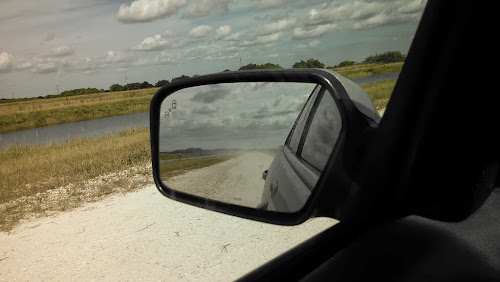 You can see this bridge in Google maps so I knew we were on the right path, as though there was a choice... 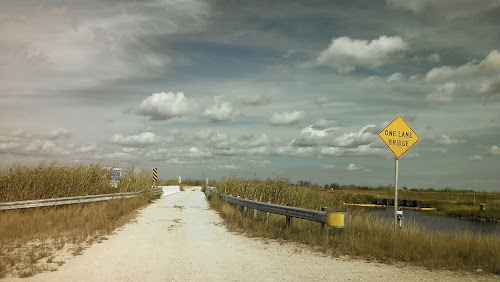 I'll tell you what, this road was a thin gray line on my phone GPS! Ain't technology great? In the days I'd have taken off after checking my map and doing my best. Nowadays you can take a quick check of your phone. Weird. 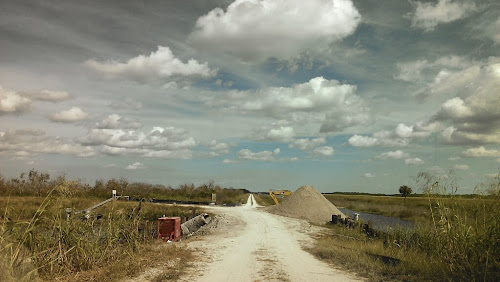 The Rotenburger wildlife area came up first. It was simply a sign by the side of the road, one at each end and that was that. 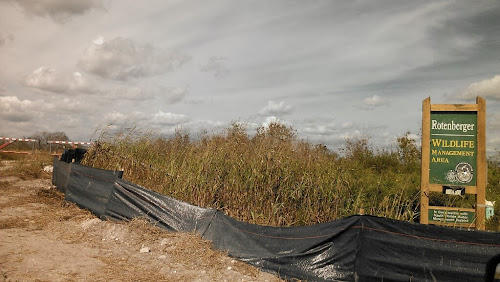 I think this Canal is labeled Dade County #5, but all I can imagine is that it was cut as part of the grand reclamation scheme designed to drain the Everglades. Nowadays the theory is the Everglades need to be restored, too little too late as usual. The state and the Feds have agreed to restore desperately needed wetlands but as for money...well...um...business as usual. 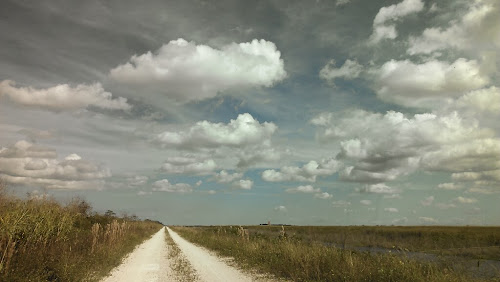 Along this section at the top of the levee that contained the canal the bulrushes grew thick and quite tall. 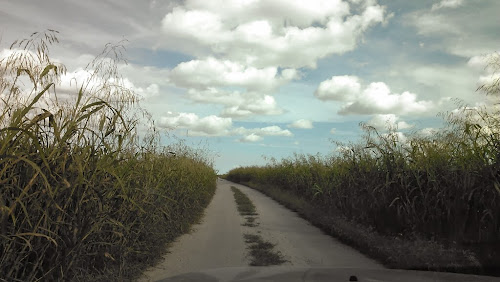 There was no civilization apparent, as the miles rolled by, Cheyenne asleep in the back, WLRN on the radio playing Saturday afternoon NPR. Then a pump station appeared: 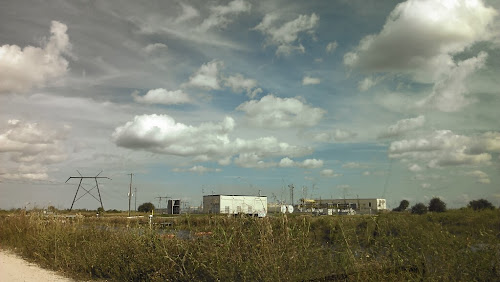 And we drove right through the installation. 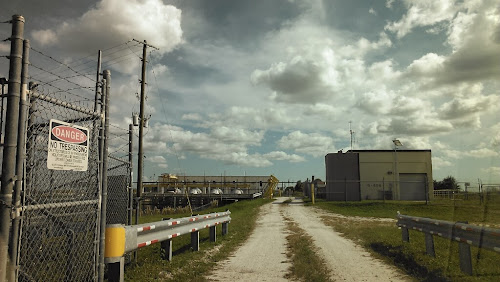 We drove to the end of the canal into a paved turn out so I could take a picture... 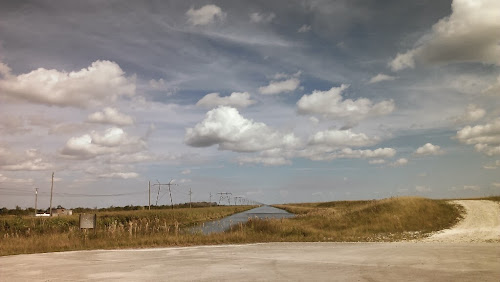 And so at last we came to Holey Land, a space much beloved by off road riders in South Florida. The odd name comes from craters in the land. They are said to have been caused by military shelling during exercises, but I rather suspect the holes are geologic in this rather odd wet landscape. As we stent off toad riders we left.

This was just a reconnaissance and I had been up all night working and had spent the day at the Seminole a Reservation so I was ready to put feet up at the dog friendly La Quinta in Fort Lauderdale. Stopping was not on the program this day. 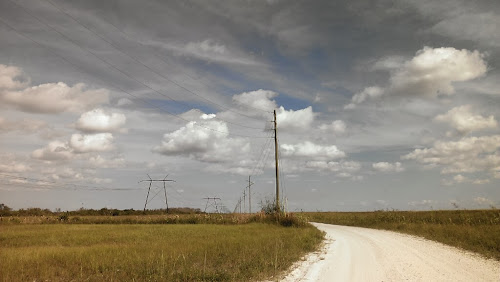 We met one solitary vehicle on our 25 mile exploration, a 45 minute journey. The pick up truck was ahead if us and pulled over yo let us by. I slowed massively to reduce the dust cloud and then took off again after we passed him, stationary at the side of the road going in our same direction. I guess we were in a hurry, oddly enough in such a lonely place. 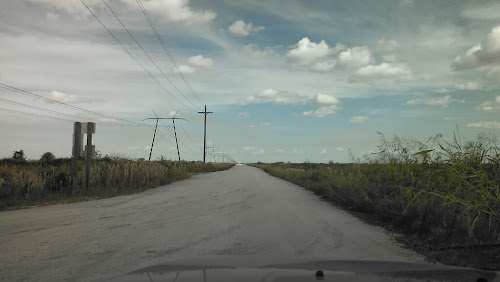 About twenty miles in and five from Highway 27 we reached pavement. I love pavement and now that my street is torn up for sewer installation I miss clean smooth, dust-free asphalt. We turned off to check a recreation area. "I suppose we should now we're here," my reluctant wife mumbled. 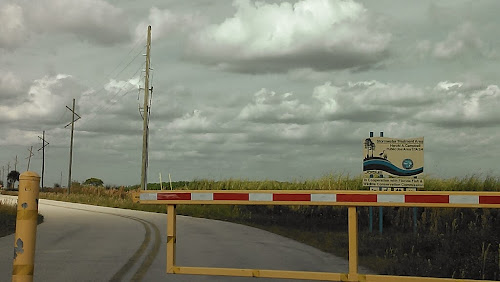 Groups of people were hanging round, presumably urban dwellers learning the joys of nature (and how to kill it) in the more or less wild. 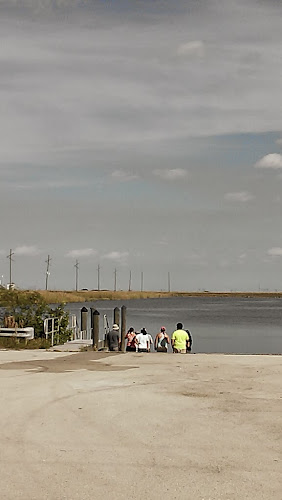 The open space was named for Harold A Campbell a water district employee killed in a vehicle accident on Highway 27 in 2006. A kind thought no doubt. 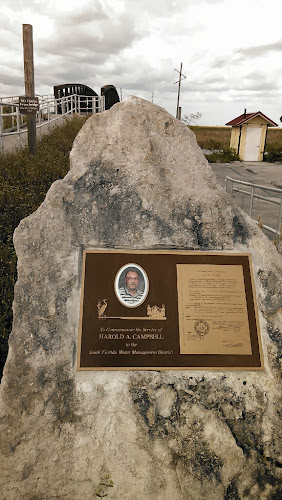 I don't know if they think of him but they seemed yo enjoy coming out here five miles from Highway 27. 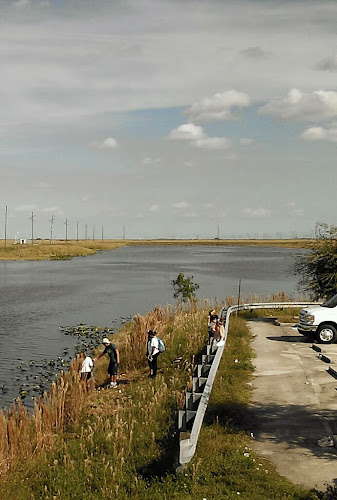 These cheerful fishermen walked out into the cleansing ponds to try their luck. 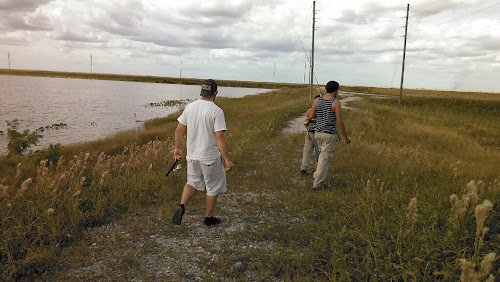 Cheyenne wandered off for a cooling dip and I worried about alligators but I figured modern society being what it is if there were any chance of gators in the water the place would be plastered with warning signs. We did fine. 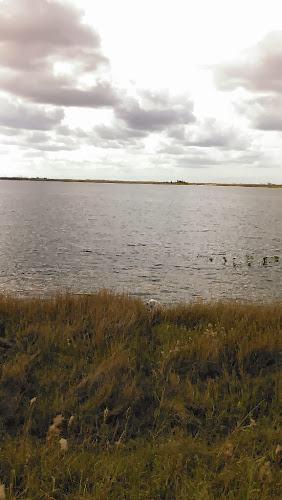 And plodded back to the patiently waiting wife in the car. She was not thrilled by this deviation from the drive to the hotel. 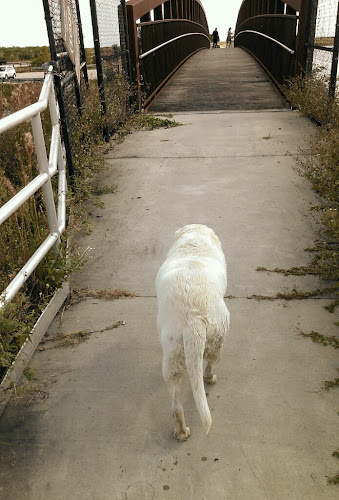 Civilization was represented by the appearance of Highway 27, a four lane road that cuts across the Everglades from Lake Okeechobee to Miami. 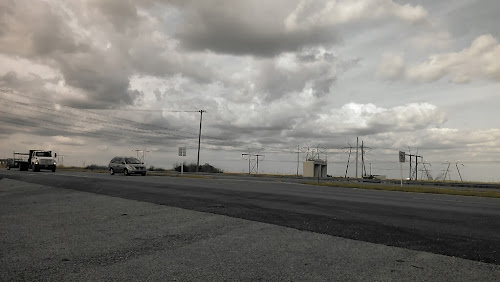 The turn off to take the dyke road to the Seminole Reservation isn't marked but it can be found at the southernmost edge of Palm Beach county. Driving north on 27 make a u-turn after you leave Broward County and pass the Palm Beach County sign and this will be the westbound entrance to the mysterious road, five miles paved, twenty not paved. 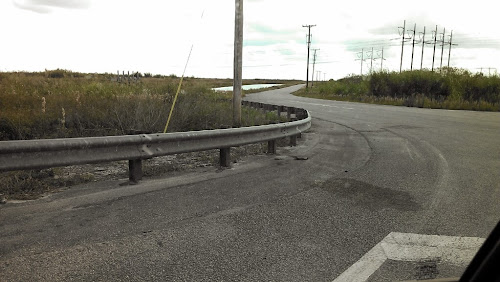 It was an easy straight drive to La Quinta. 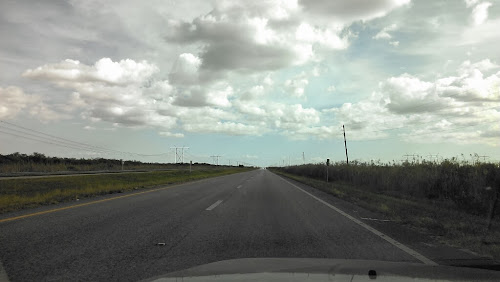 Where Cheyenne had fun going on a hunt. 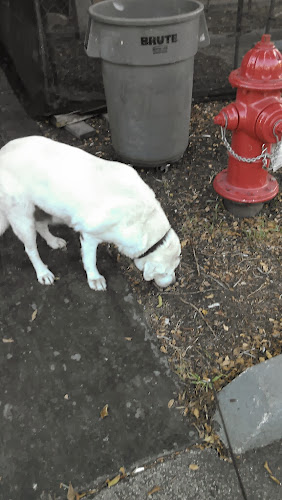 Her reward for her patience while we went exploring.