From my favorite South Florida political blog this consideration of Miami  and its relationship to Cuba now that the failed embargo is likely to be swept  away soon. I particularly enjoy the perspective of this blog on the politics of Miami and how they relate to Cuba. "On this blog, over many years now, we expressed this point less tactfully but more truthfully: how hatred of Castro in Miami moves elections through an orthodoxy as rigid as that in Havana." The Diaz Balarts have been in a family struggle with the Castros since before the Revolution and when the Bearded One won the war the Diaz Balarts gave up and fled to Miami to bitch at their brother-in-law across the Straits of Florida. Their behavior in Miami as Eye On Miami suggests would have been no better than that of the Castro brothers in their island fortress had the US allowed the exiles to be as undemocratic as they would have liked. Its only because the Republican Cubans hold the balance of power in Florida's electoral college votes that the undemocratic embargo has lasted as long as it has. People still make the case that the US needs to be the world's policeman. We need to get a lot better educated and a lot less blinkered if we want to do it well, in my view. As it is the US seems to get abused by everyone everywhere and like any abuse victim we give it back the way we received it. Hummus up the ass? No problem; we have learned torture from our tormentors. Time to let everyone else embargo each other and for us to manufacture and trade and make money once again. Let these feuds play out without our support, we simply corrupt ourselves. Check out the real story of Miami and the Cuban Exiles:

Musing on Cuba and the U.S. … by gimleteye


"This is where President Obama failed to understand the city," Strouse writes. "It is not just "a demonstration of what the Cuban people can achieve." These days, Venezuelans fleeing a failed economy play a role almost as large as the Cubans. Brazilians, whose economy is also flagging, have bought up huge blocks of downtown condos. Colombians, Nicaraguans, Argentines, Haitians and others all have their piece of the city, too."


Fair enough. The expanding influence of other Hispanics in South Florida has been well noted throughout our economic and political life. Strouse continues,

"… I wish, as the president said, that Miami were "a place that reminds us that ideals matter more than the color of our skin, or the circumstances of our birth." It is not. It is one of the nation's most segregated cities and one of the most extreme when it comes to rich and poor. Blacks have complained for decades of their inability to get good jobs here and many of the best African American minds have departed."


Strouse is right on point, of course, but I have a different interpretation. By singling out South Florida Cuban Americans, President Obama's speech acknowledged the outsized influence on Florida and national politics. (The New York Times ran an analysis along this line, yesterday.)

On this blog, over many years now, we expressed this point less tactfully but more truthfully: how hatred of Castro in Miami moves elections through an orthodoxy as rigid as that in Havana.

The purpose of this orthodoxy -- that manifests in political campaigns and regular broadsides (Spanish language AM radio in particular) -- is economic. By fixing the pecking order in city and county government, Cuban American elites in Miami achieved spectacular results. Not so good if you care about the quality of life.

But times change. Baselines shift. The Cuban American orthodoxies that Bill Clinton responded to in 1992 and Bob Graham even earlier have faded. Antagonists grow old. They disappear.

Every morning at Miami International Airport, in queues to ticket counters of outbound flights to Havana, the failure of the embargo is on full and visible display.

One reaches a simple conclusion ignored by the GOP: the Kabuki theater of US-Cuba relations outlasted audience preferences.

In yesterday's blog post, I called out Republicans for opposing Obama's historic initiative as "fighting yesterday's war". Along this line, angry Senator Marco Rubio, who repudiates reconciliation and science (global warming), ought to have a prayer session with the Pope.

In the meantime, the economic elite in Miami's Cuban American community -- mostly Republican -- if they haven't already visited Havana, will be buying their tickets now.

Fidel Castro's passing will feed a Miami audience hungry for any kind of catharsis, but change in Cuba -- when it comes -- whether slowly or quickly, will not be "democratic" for a long time. In the meantime, our Republican Congress would do well to get our own house in order; never mind Havana. Let's start with campaign finance reform. Imagine the celebrations in the United States, if we had fair elections and fair districts.
Posted by Conchscooter at 3:00 PM 1 comment:

Cheyenne was snoring on her bed, I was tired of reading and as I was working a late overtime shift I had an hour to myself before my wife came home from her late shift at work. Better keep putting miles on the Vespa I told myself. 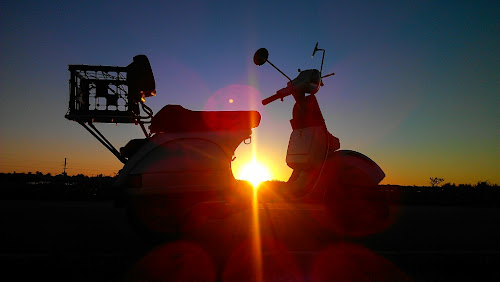 I have just passed the official break-in period of 600 miles (1000 kilometers) and with a gearbox oil change under my belt I have been seeking the elusive top speed in short bursts. So far it's about 60 mph (95km/h), though with a headwind a modest 53 seems the top. The engine feels strong all the way and vibrations present below 35 fade away around 45mph so 50mph (80km/) is a comfortable cruising speed. 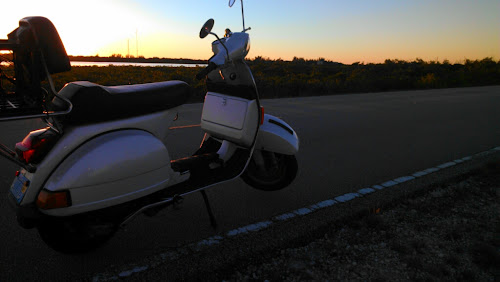 I think that over the next few thousand miles the engine will loosen up but if next year 55mph (90km/h) as a steady cruising speed seems busy I may consider a more liberal exhaust to increase upper range torque. I am told a SIP Road 2 is a direct replacement which leaves room for the spare wheel in its side carrier. I am bearing it in mind. My goal is to travel easily with traffic on the highway in a 55mph zone, where speeds up to 60 or more are commonplace. The P200 will get there over time. 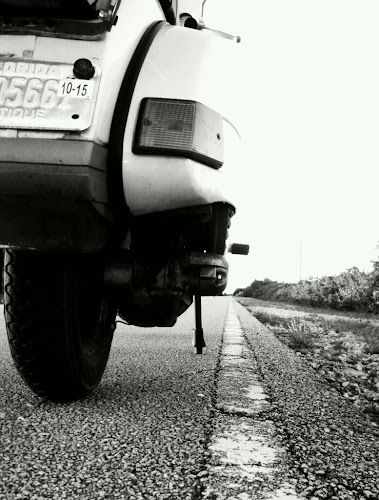 I kept up with traffic on the highway the six miles from my house to the turn off north on a Middle Torch Key. I rode the winding north go the causeway between Middle and Big Torch where I stopped on Dorn Road. The sun was setting - fast! 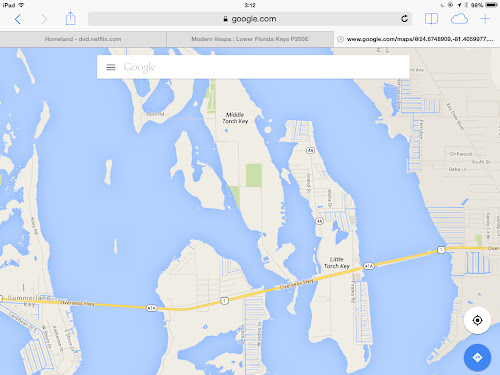 I hardly had time to ride down 50 yards of gravel before the orange orb was almost buried in the mangroves and salt water. 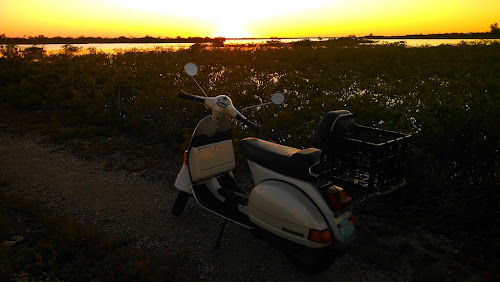 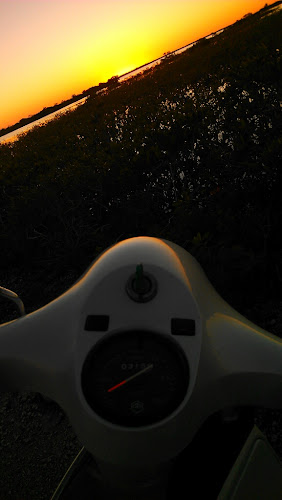 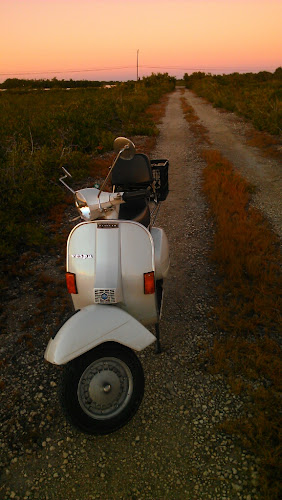 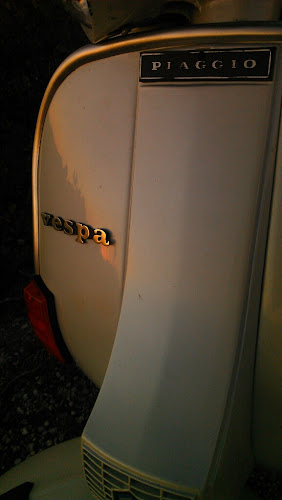 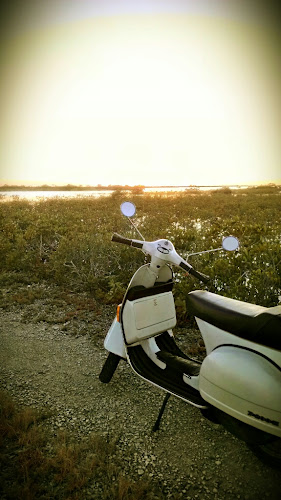 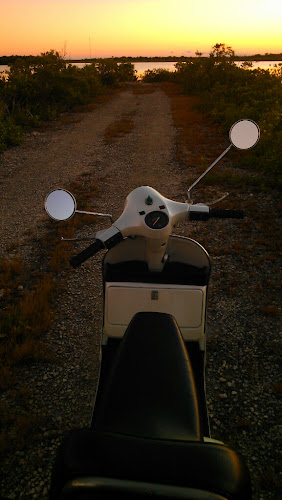 Riding back I tried to catch a reflection in the mirror but with the engine running the picture became a testament to the vibrations of the small two stroke single. 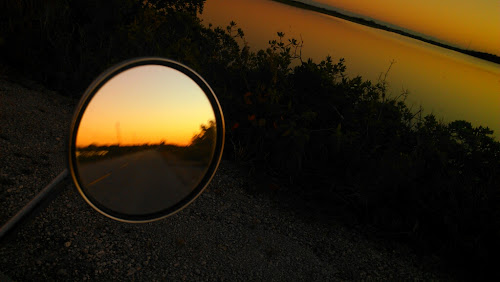 Never mind the Vespa; the views were tremendous. 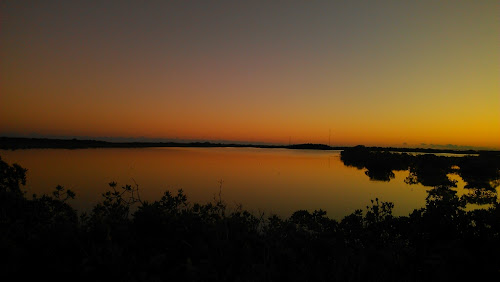 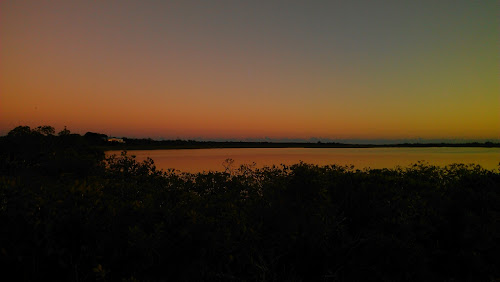 Dorn Road, like all side trips in these islands is a dead end. However this road unlike most is quite long, eight miles from the Overseas Highway to the turn around. 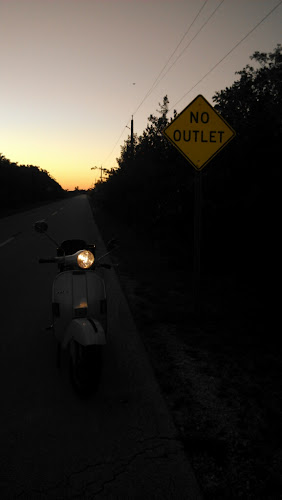 And of course by the time I got back it was dark and a small yellow Labrador had woken up and was very ready. 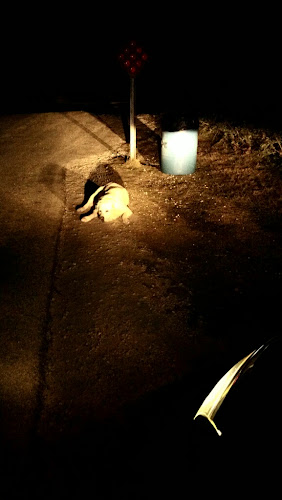 Back out again, this time with the car for a walk at the Ramrod Pool. So then we were both happy.