Museum of Art and History

The bright orange blob overlooking Clinton Square next to the former Westin Hotel, now the Margaritaville Resort ("where luxury meets paradise" squirm) is not supposed to be there. For years when Key West went through its latest and most likely last economic crisis the building almost collapsed under the weight of its own neglect. Not anymore, it is now moving from strength to strength as a source of information about the history of Key West with lots of exhibits laid out with a professionalism I never saw in the past.   They seem to be spending money to put on a  good show and it looks excellent. 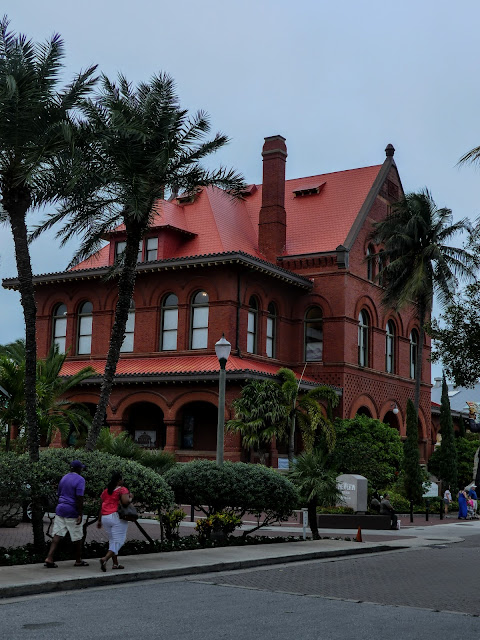 The Custom House is one of those places in Key West whose name is frequently mispronounced. It is not actually the Customs House, though to hear it said so often you might think it was. Key Plaza is another one as the shopping center where Kmart lives is often called Keys Plaza. And that well known watering hole Schooner Wharf is often given an extra S by those that know no better. Just like the tourists I heard yesterday walking on Whitehead pondering the meaning of Konsh, whether it was a mollusc or a human resident. Or both and either way its still pronounced konk. Very confusing. 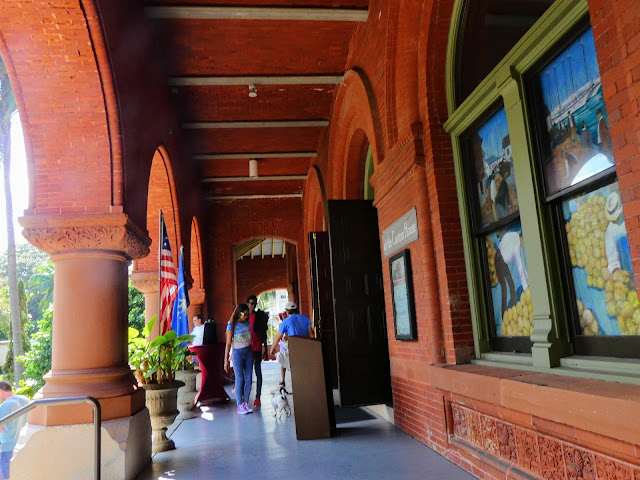 Seward Johnson the noted sculptor of true to life art that some people hate and others don't, has changed up the displays around the exterior of the Museum. Inside there was an exhibit about the Navy in Key West outside they were kissing to celebrate the end of World War Two. 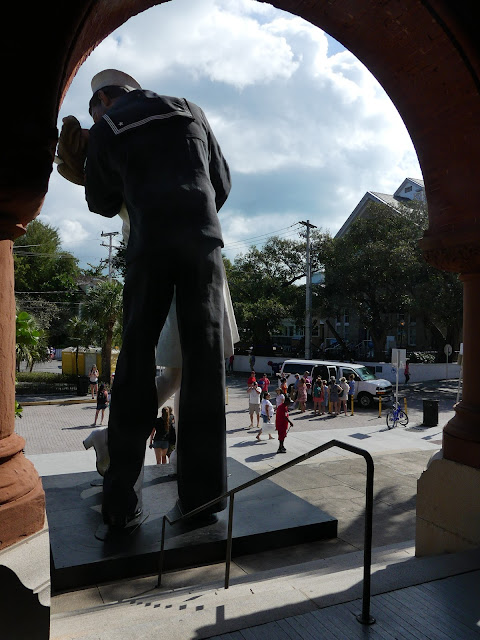 An Irishman by the name of William Kerr came to Key West in 1872 and designed some buildings around town culminating in this Federal Building in 1891. Much is made of the design which supposedly met Federal requirements fo border buildings next to Canada though I know nothing of that. AS to why the roof was pitched as it was I couldn't say but they don't get much snow in Texas if it really was a universal border building Federal design. 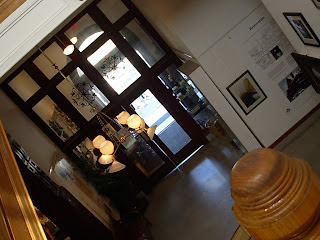 Inside there is a permanent Hemingway exhibit with photos of life in Key West and artifacts as merits the city's favorite macho author. 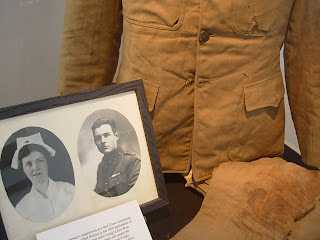 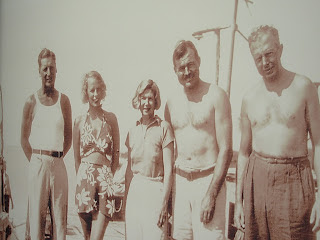 Tennessee Williams has an exhibit honoring his painting skills on display at the moment. Rather crude dare one say simplistic which seem to get traction owing to his reputation as a writer than these naive pieces of art showing off blonde haired very pink young men exhibiting their gentlemen's vegetables to the painter who was rather more interested in their truncheons than in Hemingway's more wholesome interest in killing fish. Here's a discreet depiction of similar that I found online: 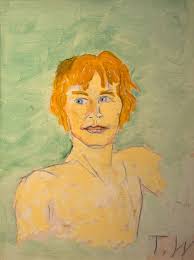 Several demure cruise ship passengers came by the discreet exhibit in a closet-like room and backed away rapidly on seeing what was up for their inspection as it were. Apparently Williams' private art was an expression of his self loathing and despair at his homosexuality, according to those who over analyze stuff. More likely the loathing came from the outside:
In the late 1940s and early 1950s, the McCarthy era, during which Williams wrote his best work, homosexuality branded one a traitor as well as a "degenerate." -from The Closet Professor.

Those were the times he lived in and the way things are going seem likely to start recurring soon if we aren't careful. Another artist on display is the ever popular Mario Sanchez mentioned previously on this page. Here is his art of the arrival of the first train in Key West in 1912 and his allusion to the ride he took later to the mainland:

The train changed Key West's character forever. No longer did you need to take a couple of ferries to drive to the mainland, even though the road out of Key West still only went as far as the ferry terminal on No Name Key some 30 miles away. Hemingway himself came to Key West the first time to pick up a car in this island town. I see a lot of similarities  these days to the transformation the train brought to what was an isolated island. Money now comes in and drives the working class out. The train brought the outside world to a town where many people dreaded it's arrival and the transformation it would bring. But one is obliged to celebrate progress and they do at the Museum. 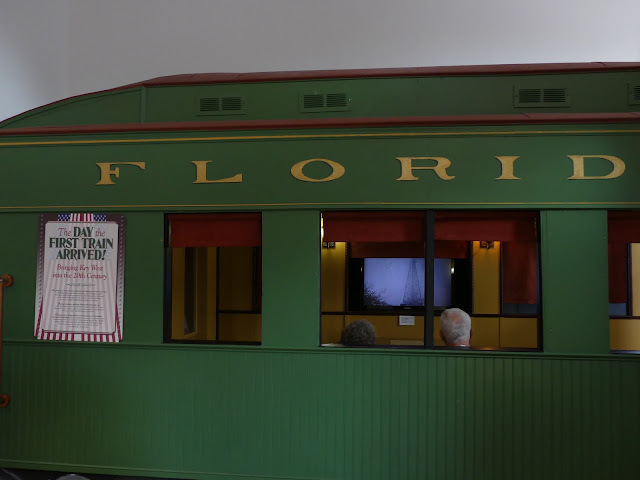 Then there is the USS Maine another historical artifact from a  little remembered conflict with lessons for today. The battleship blew up in Havana Harbor said to have been by Spanish sabotage though today the evidence is viewed dispassionately and wet coal in the bunkers is blamed for the accidental explosion that started the Spanish-American war that gave the US Puerto Rico, Cuba, Guam and the Philippines. The inquiry into the sinking took place in Key West where many sailors are still buried. 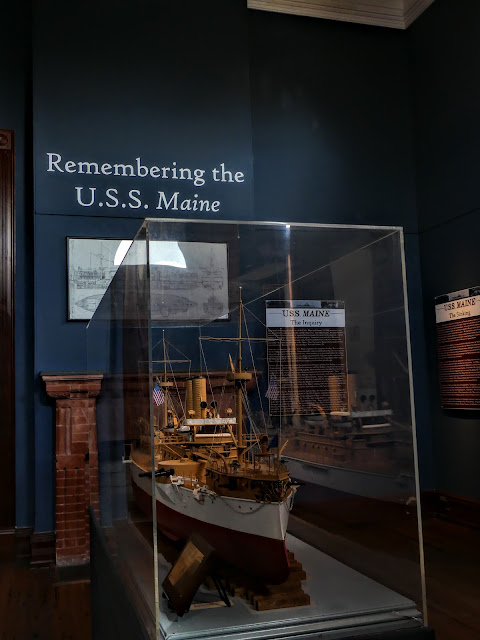 Key West was a Union town in the Civil War. The man on the left, Captain Brannan made it so by surreptitiously moving his artillery soldiers to Fort Zachary and flying Old Glory in defiance of the aficionados of slavery who ran the town. The middle figure, Stephen Mallory was the Confederate Secretary of War who came home to practice law after his side lost, such was reconciliation in those days. He got a square named for him. Tift on the right ran the Union blockade to supply the Confederacy. He made money and got a street named after him. Brannan who made a singular contribution to helping the good guys (if you oppose slavery) win got nothing. Think about that for a while. 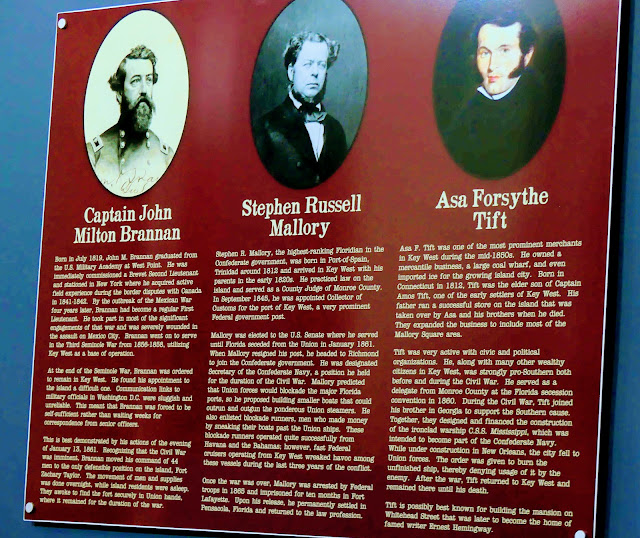 Key West was a little village huddled around the port where you can see pleasure boats these days at Key West Bight and Mallory Square (Port Rodgers as was) which is seen below as a place to unload cargo. In the background (right side) Fort Zachary was an island connected by a causeway. It became integral to Key West by virtue of harbor dredging that threw up dirt around the fort over the decades. 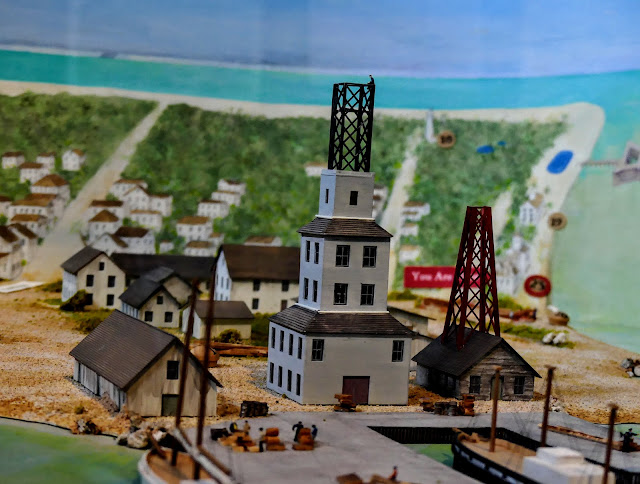 In the picture below you can the pond that used to exist underneath where the main drinking section of town is, in the area of Duval, Greene and Caroline Streets. The oldest house on the 300 block of Duval used to be waterfront property in those days. The city filled the pond in before the Civil War. 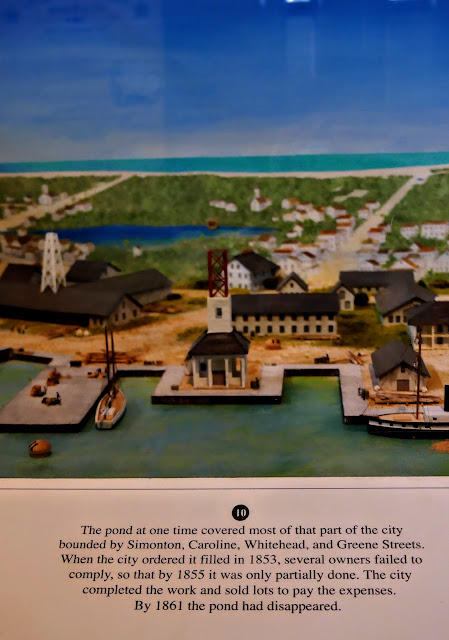 You can see the pond marked on a map of Key West at the Firehouse Museum on Virginia Street: 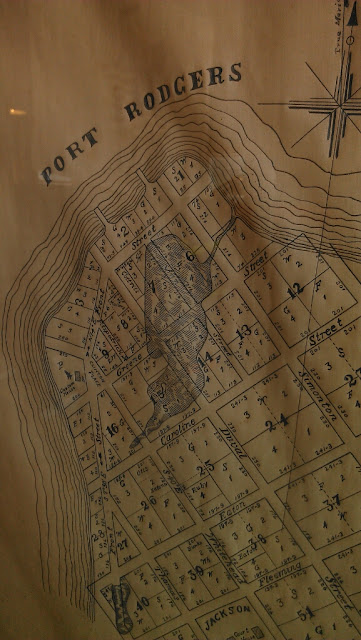 As for the stories of pirates in key West it's all rubbish I am sorry to say. The city was seen by the US government as an important military base and a rather obnoxious but efficient man David Porter was in charge of the fleet dedicated to protecting cargo in the Western Caribbean. He annoyed the locals so much he was removed in disgrace and went to organize fleets on the Barbary Coast of North Africa. 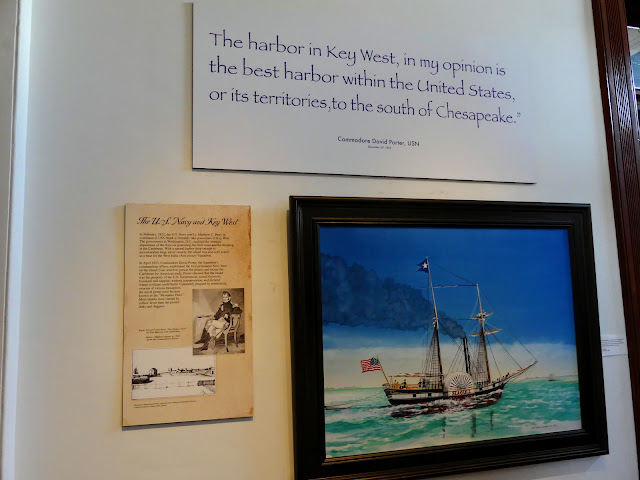 Lots to see and lots to ponder, especially the value of being nice in a small town. You get voted off the island all too easily, then and now.
Posted by Conchscooter at 12:00 AM 3 comments: