Life Or Debt In The Keys

There is some debate underway in Monroe Country about the value of Trauma Star the county air ambulance service. As usual the debate has descended to the spit balls and school yard level of political discussion but there are real issues at stake here, not least how much ordinary working people pay to ride an air ambulance to Miami.

There are two air ambulance services in Monroe County. Lifenet is the private provider and they charge full fare to any and all passengers. Lest you think you are a one percenter and imagine you can afford a ride to burn or trauma centers in the Big City a Key West resident recently took a ride and ended up on the front page of the paper facing a $27,000 bill that he says he cannot pay. That half the adults in Monroe County have no health insurance should not allow this to be construed as an unusual occurence. When Lifenet won the contract they promised they wouldn't hound customers to get their bills paid. Interestingly if you need an air ambulance in the city of Key West officials are required to call Lifenet first. The customer gets no say. If Lifenet's ambulances are busy they call Trauma Star as the second choice. County dispatchers call Trauma Star first to pick up the patient outside the city. For residents of the Keys the difference is crucial.

Trauma Star service is part of the Monroe County Sheriff's Office and is subsidized by a $50 per parcel tax throughout the county. The agreement here, honored by our public servants, is to charge county residents no more than their insurance will pay, and nothing at all if they lack insurance. Their rates for paying customers, publicly listed are easy to read and decidedly cheaper too: $5500 for call out and $80 per mile.

Here's the problem, in the political environment in which we live, toxic to rational discussion and sensible outcomes the vocal opponents ask loudly why those that don't need an air ambulance should pay for it through something as iniquitous as taxes. As though Lifenet isn't charging those of us with insurance (like me!) to pay for those who can't pay their impossible bills. This ghastly state of affairs came to very public light a few years ago when County Commissioner Mario di Gennaro a member of the notorious Gang of Three suddenly saw the populist light when his daughter got a Lifenet bill for a flight to Miami. He tried to win public support by campaigning for Trauma Star service but his record of dubious public positions lost him his seat anyway. The paper estimated his net worth from his disclosure forms at between 16 and 20 million dollars so I don't suppose his daughter is still dealing with that particular bill, but it should give every resident of the county of the Right or Far Right pause when a one percenter gets shaken awake by an air ambulance bill. 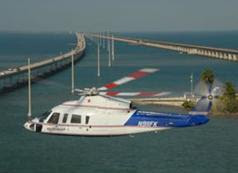 Don't count on it though. The problem with supporting Trauma Star is that it is such a sensible public service that opposing it forces people of the Right to once again lose their political, social, ethical and emotional minds. If one supports the notion of a very modest parcel tax to help pay for a service that saves lives, a service that most of us can't pay individually, you find yourself on the single payer spectrum of public health service. Trauma Star is single payer writ small, Lifenet is what we have now, huge bills paying salaries, stock holders and unrecoverable charges. The recent letter writer in the Citizen whinging about Trauma Star and its tax base of support (she cried: Socialism!) better be ready with a big fat check because Trauma Star is currently reserved for those of us lucky souls who live anywhere in the Keys outside Key West. Lucky me.

Posted by Conchscooter at 10:40 PM 3 comments: Links to this post

It wasn't so much that the former U-Haul was abandoned in a perfectly good parking space, though that is odd in a town where space, and parking space in particular is at a premium. It was the oil pan underneath the vehicle. One quick oil change and this baby will be ready to go.

I wonder what the story really is, how it ended up here and who was going to do that oil change and got distracted at the last minute. I will never know.

- Posted using BlogPress from my iPad
Posted by Conchscooter at 5:26 PM No comments: Links to this post

I expect to see a Great Egret in a swampy place wading through water and finding lunch submerged.

This specimen was in suburbia up the street from my house.

As I drove up it spotted something and in the brutal way of the wild world pierced the grass and came up swallowing something that appeared to be struggling to stay alive, even as it went down into the void.

The bird ignored me as it went on looking for pudding among the rocks. It is an amazing neck.

I went home to find something long dead in the fridge for my lunch. Same principle, different methods.

- Posted using BlogPress from my iPad
Posted by Conchscooter at 11:37 AM 2 comments: Links to this post

This is not the first time I have written about the missile base at the end of Government Road. Indeed I have two previous essays amongst all my 2300 entries in this blog, on the place as well as photographs elsewhere of surrounding Little Hamaca Park and the nearby Riviera Canal. This corner of Key West is not often viewed and is easy to overlook if you don't know its there in New Town.

Beyond the fact Cheyenne loves walking around the disused buildings I enjoy the sense of open space and serenity in this odd spot at the end of the road in the middle of the city.

On a day when puffy trade wind clouds were covering the sky and the sun and breeze were conspiring to put me in an expansive mood I just wanted to have another go and recording the colors and the light.

There is huge amount of history associated with this place during the Cuban Missile Crisis and all that is covered in the second link above while the first link has additional photos of the weird military structures left behind- former magazines and the like needed to support the missile batteries.

My fear is that sooner or later this spot will be cordoned off and developed or sanitized or made whole somehow in a way that will deprive the casual visitor of a chance to wander at will among these relics, and all their potential for the dreaded "liability." It cracks me up how people love to criticize lawsuits and lawyers but as soon as they become the injured party its time for the courts to intervene in their favor! One shining example of that was when I fell off my Bonneville in Big Coppitt in the middle of some poorly marked roadworks. The suggestions poured in that I sue etc.. etc... In defiance of all custom I rode home and paid for the bike damage myself. I would do the same were I to suffer damage here. Others? I suppose its reasonable to wonder what they would do were they to trip over their own feet among the rubble...

Some of the antennae are still in operation apparently though whether the feds operate the airport, listen to Cuba or do some other thing with them I couldn't say. I just the like the way they look against the sub tropic winter sky.

I hope I get to enjoy this little walk for a while to come. I need no paintball, also available here or any other organized activity. Just my dog and my camera for an hour of diversion.


- Posted using BlogPress from my iPad
Posted by Conchscooter at 4:12 AM No comments: Links to this post