There were three or four large motorboats anchored off Key West and for some reason they like to disguise themselves as Christmas ornaments while they do it. It may not be immediately apparent  but  Rusty was not the least bit interested in the illuminations offshore and he is the arbiter of all things interesting. 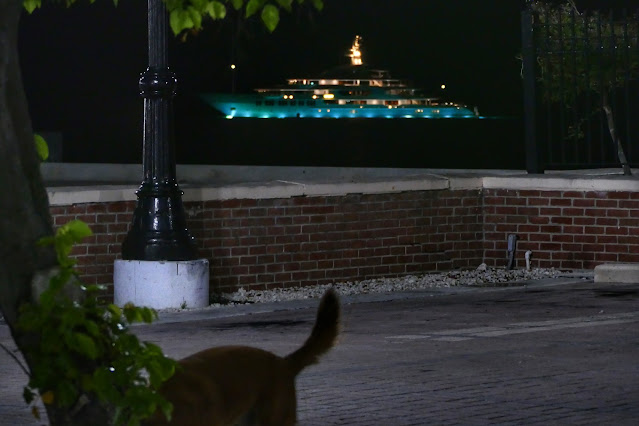 The barricades are gone, Mallory Square is wide open but this beautiful pre dawn morning was open as though for private viewing. No one was around. So we took advantage. 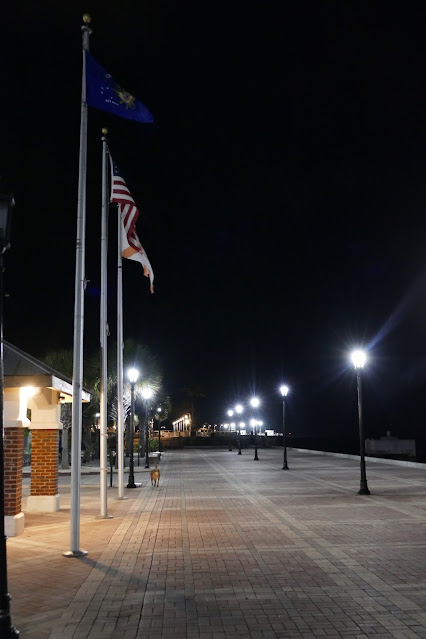 It occurs to me how far on the edge of reality I do live, down here. The rest of the country is caught up in the Black Lives Matter protests and  Key West had its own peaceful homage to the movement with a gentle amble through downtown. Despite all the rumor mongering online the protest in Key West was a civilized march led by law enforcement properly masked and in support of human rights and decency.  As it should be. 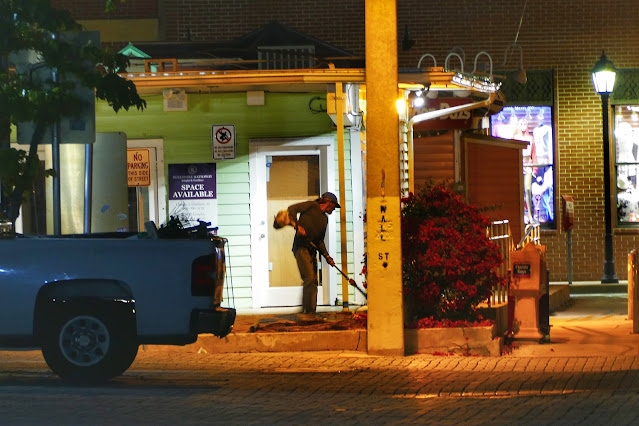 Key West is a complicated mix of social groups, more than black and white and to try to explain it is not easy as these subjects have so many points of view. I hated Venn diagrams when I was a child in math class but Key West is, in effect a Venn diagram of races, cultures and interests. People who have lived here a long time like to call themselves "freshwater Conchs" in a pale and unnatural imitation of people who were born here and have roots here. Conchs argue that being born in Key West makes you one but I, in my iconoclastic way prefer to think that graduating. Key West High School makes you a Conch. Thats where the connections come from and connections are what constitute life in Key West. 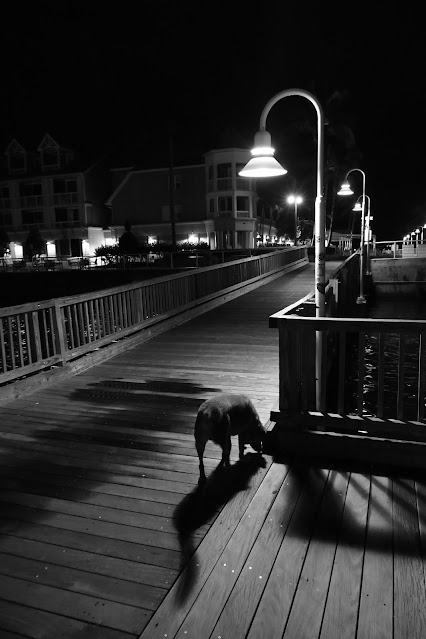 Bahama Village has come under attack in Key West not from intolerance or violence but from the usual bugaboo in modern Key West: money. Gentrification is an avalanche that is overrunning many aspects of life in town and to live close by the heart of Old town is to invite people with money to turn your neighborhood into a winter playground. It's happening in Bahama Village but slowly. Goombay points toward the Bahamian roots of families black and white in the Keys. Loyalists and their slaves fled the US as the revolution took hold and set up shop in the Bahamas. After things cooled down families came to Key West maintaining connections to the Bahamas as they settled here. 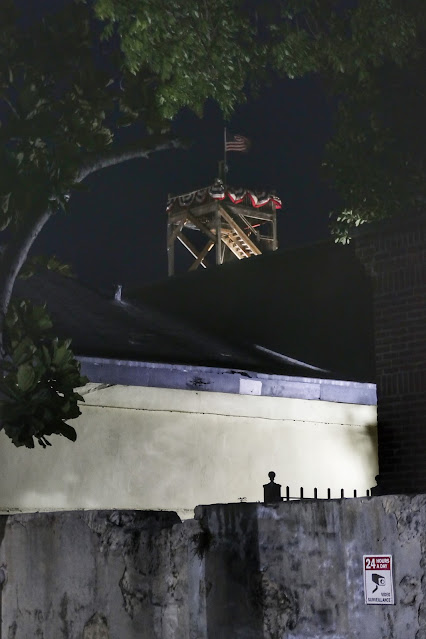 Then there is the Cuban community which has its own bifurcated history. Some of the Cubans in Key West have deep roots from the 19th century a time of revolt and war in Cuba which produced its own exile community. Then there is the new wave of exiles from the Castro regime in the 20th century, though most settled with relatives in Miami. The Cuban connection gives Key West a particular  home grown culture which you could describe as ethnic in the sense that it's not Anglo American. Food art and music out of Cuba has a home in Key West quite apart from the Afro-Caribbean influences and mainland US imports that are part of modern American life here. 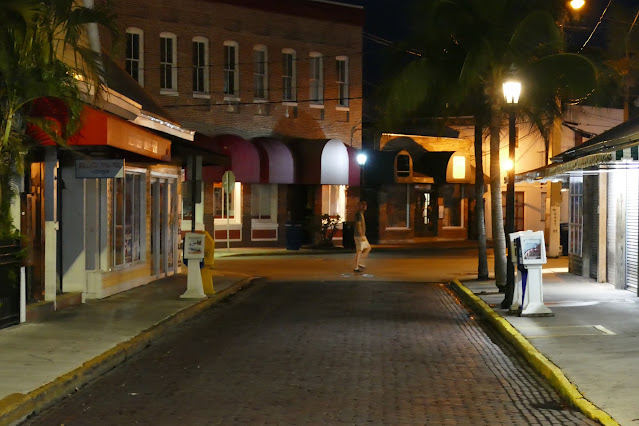 Key West is by no means perfect but there are lessons the mainland could learn in terms of tolerance. Unfortunately a lot of Key West's history is ignored in the rush to get publicly drunk. though if you walk Petronia Street and happen to see Dupont Lane you now know that was the first elected black Sheriff in Key West and I dare say if not the first a rarity in the reconstructed South. Annual remembrances for dead law enforcement always pay respect to a Sheriff's deputy killed breaking up a drunken brawl in 1901 Key West. Deputy Frank Adams was also as it happens African American. 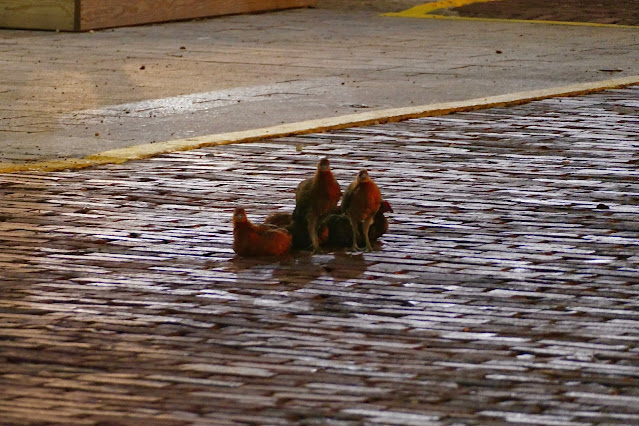 CNN ran a story about an all white town that gathered to join the Black Lives Matter protests by marking them in their town, as though somehow with Americans should not be expected to step out like that. I guess I am with those who hope that this is a turning point long sought that may set the notion of equality under the law in stone for once, which would be nice.  Maybe small town America can step up and teach the big cities that tolerance is an everyday struggle for some people and big bursts of protest must be followed by long months and years of chipping away at expectations. 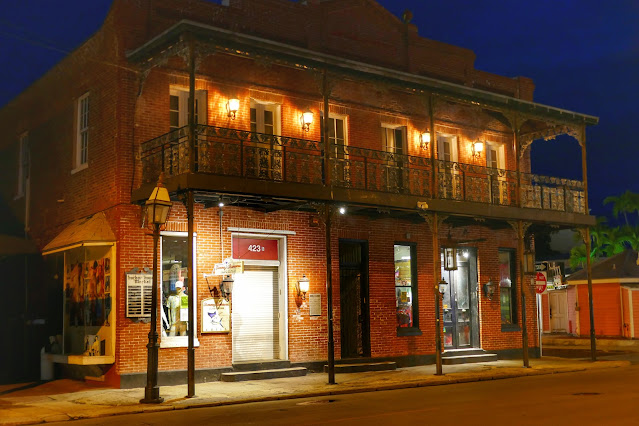 Key West is a frontier town on the ocean, a place where foreigners come and go and wealth has accumulated through centuries of trade with very exotic places. It's a truth about this town, the across the sea connection, that most visitors can't seem to imagine even as they take a sunset sail and play at piracy for an hour or two. The most notable feature about piracy equally often ignored is that pirate chiefs were elected and if found wanting were voted out of office just as easily. Strategic decisions were voted upon and treasure was shared among the crew. Just as there were black cowboys whitewashed by Hollywood there were black pirates living equal and democratically controlled lives long before slavery was abolished among the respectable people ashore. 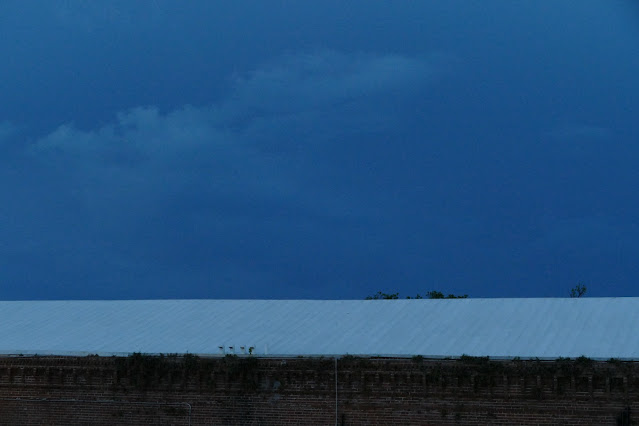 Simple prejudice is hard to sustain in a town with roots all over the place. If speaking Spanish offends you Key West has roots sunk into the Spanish and Creole languages that go back further than you do in this town. If men dressing as women annoy you, same story oddly enough. If you don't understand instinctively why Black Lives Matter just as much as your life matters Key West may be the wrong place for you. People tend to be annoying but we are all annoying equally in our own annoying ways around here. And when you live in a small space you lose the plot easily if you don't understand and live by this simple maxim of tolerance. Very expensive homes do not necessarily have offsets in Old Town and neighbors of all stripes of rank and wealth live cheek by jowl. 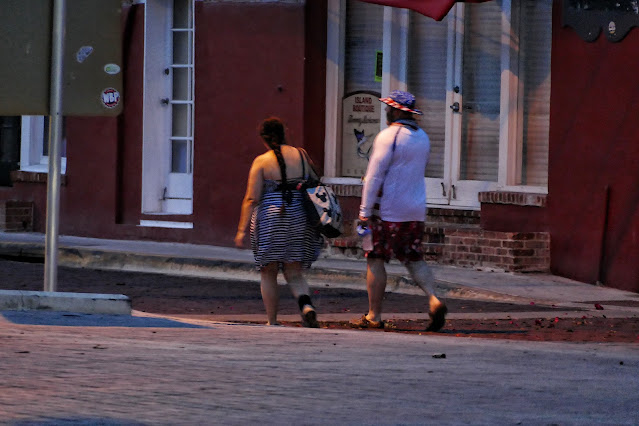 There's prejudice everywhere in all of us. and we can each of us take small steps to find our way past our own prejudices. But for government or organs of power to express that prejudice is when intolerance goes off the rails. To me that's what Black Lives Matters means. By all means despise black lives en masse on your own time if you must, but when you show up in society to do a job to dispense the law to be a neighbor, then you show up without your private prejudice. And eventually that private prejudice will get chipped away, but it does seem to take a very long time. 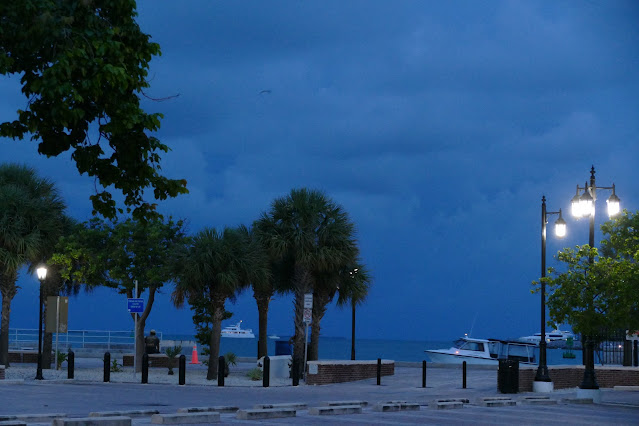 I hear a lot of people yelling these days about freedom, as though freedom is a certificate of merit awarded to those who choose to be free. I wonder how many free people who used to come to the sunset celebration know who Stephen Mallory was? Wikipedia knows and the ironies are amazing to me:
Stephen Russell Mallory (1812 – November 9, 1873) was a Democratic senator from Florida from 1850 to the secession of his home state and the outbreak of the American Civil War. For much of that period, he was chairman of the Committee on Naval Affairs. It was a time of rapid naval reform, and he insisted that the ships of the US Navy should be as capable as those of Britain and France, the foremost navies in the world at that time. He also wrote a bill and guided it through Congress to provide for compulsory retirement of officers who did not meet the standards of the profession.
Although he was not a leader in the secession movement, Mallory followed his state out of the Union. When the Confederate States of America was formed, he was named Secretary of the Navy in the administration of President Jefferson Davis. He held the position throughout the existence of the Confederacy. Because of indifference to naval matters by most others in the Confederacy, Mallory was able to shape the Confederate Navy according to the principles he had learned while serving in the US Senate. Some of his ideas, such as the incorporation of armor into warship construction, were quite successful and became standard in navies around the world. On the other hand, the navy was often handicapped by administrative ineptitude in the Navy Department. During the war, he was weakened politically by a Congressional investigation into the Navy Department for its failure in defense of New Orleans. After months of taking testimony, the investigating committee concluded that it had no evidence of wrongdoing on his part.
Mallory resigned after the Confederate government had fled from Richmond at the end of the war, and he and several of his colleagues in the cabinet were imprisoned and charged with treason. After more than a year in prison, the public mood had softened, and he was granted parole by President Andrew Johnson. He returned to Florida, where he supported his family in his final years by again practicing law. Unable to hold elective office by the terms of his parole, he continued to make his opinions known by writing letters to newspapers. His health began to deteriorate although he was not incapacitated until the very end.

We live in complicated times in a complicated place watched by the rest of the world which does envy us and were we to do more thinking and less yelling the ironies of being human may be more apparent and less threatening. I very much wonder what happens next. Whatever path the United States takes, as much as our opponents want to deny it, the rest of the world will follow. I hope we collectively make the right choices.