I let Cheyenne take a circuit of the dog park at Higgs beach last week and to my surprise there were cars parked in the section reserved for small dogs. 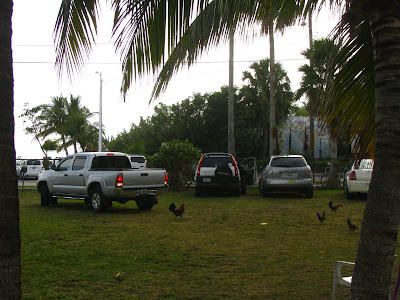 Another walker clued me in- they were gathered for the garden club meeting across the street at the West Martello Tower. Winter in Key West is just one meeting after another to keep those northerners happy. 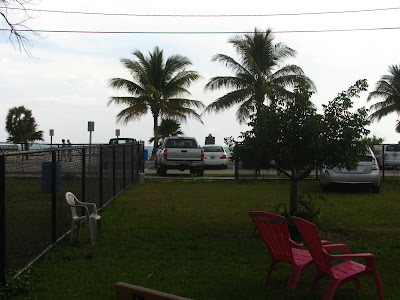 For some a lounger on the beach is entertainment enough even under a gloomy gray sky. 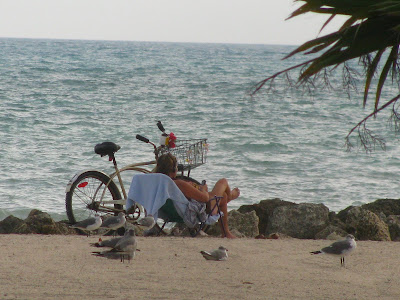 One thing that strikes anyone who travels around the Keys a little bit is how often vehicles cross paths in the course of a day. The "coincidence" of seeing the same vehicle coming from and later going to the city is too frequent to mention. However when I passed this Honda CB350, a motorcycle almost as old as I am, it had been on the shoulder of Highway One in the Saddlebunch Keys with two people on board. 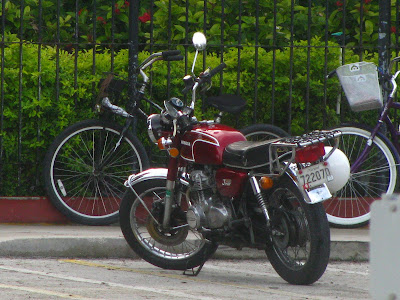 Pretty as a picture but apparently no longer able to keep up highway speeds. The race does not always go to the swift (though usually in my experience it tends to). This guy looked caged but actually he was meditating outside the dog run. 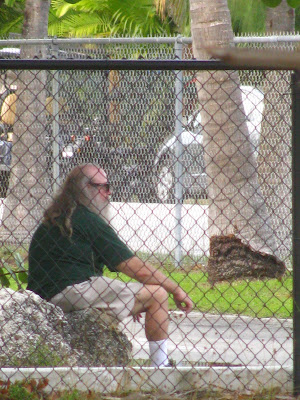 For some reason Cheyenne got mixed up briefly with some youngsters in the park and that brief encounter reminded me how glad I am I got an older dog at the pound. Some bundles of energy are just too much. 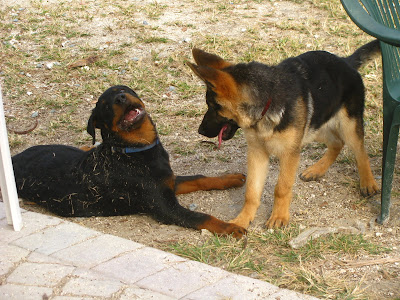 Speaking of energy...important people want to spiff up Higgs Beach and Park not least because there is a large segment of transient winter homeless people who literally camp out here during the day. The residentially challenged don't bother me but I am naturally resistant to change so I like things the way they are. 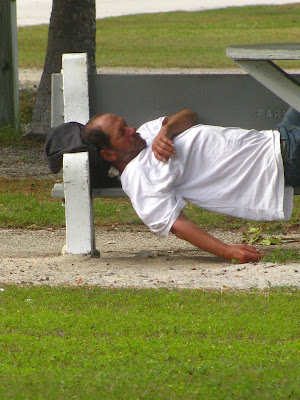 Birds in public somehow manage to carry off the dignity thing far better than a great many people. This seagull on the roof versus the drunk sprawled on the bench... 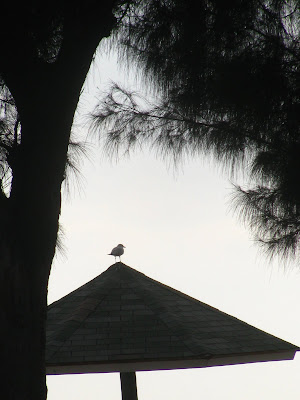 There is a rooster that has taken up residence in the parking lot of the Police Station and every morning when the bars close he comes home and starts crowing and it is making me crazy. I am going to ask one of my sworn colleagues for the brief use of their gun. Seeing this rooster at the park reminded me forcefully of the irritant at work. 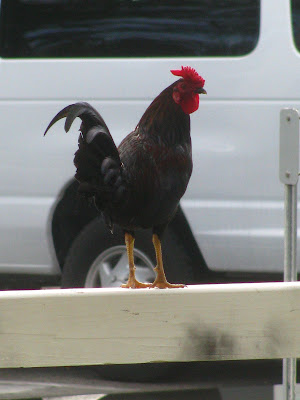 Some people actually like these nuisances and tourists love them. They are also the people who like vegetable eating iguanas so you know they have no taste at all. This woman was dong exactly what I was doing, taking it all in. She was one among many that did not appear to mind the gray skies. 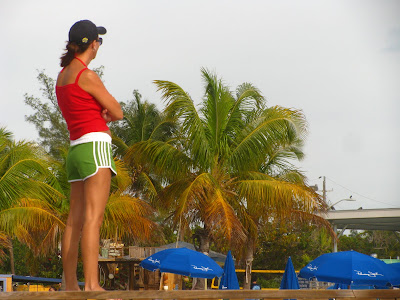 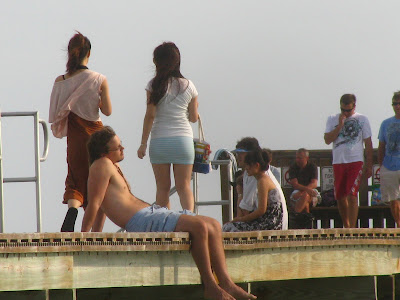 Sometimes I miss my catamaran, most of the time I don't. 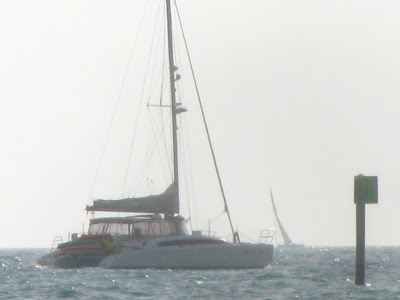 The Casa Marina Hotel is surrounded by old decaying buildings that appear to date from Henry Flagler's ear when he built the place. I wonder how long they will last. 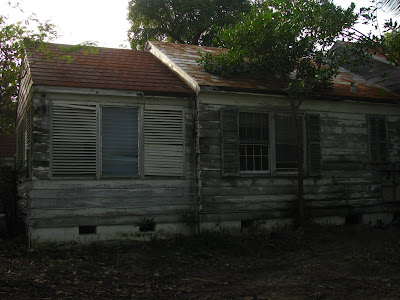 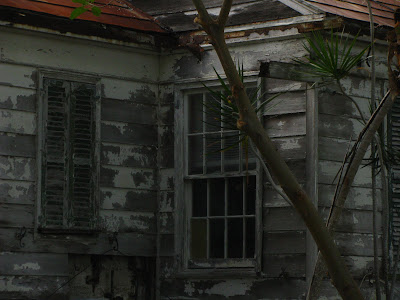 One of these days I'm going to take the time to wander the halls of the hotel. I never have and I'm told it's lovely. So many dog walks, so little time for myself. 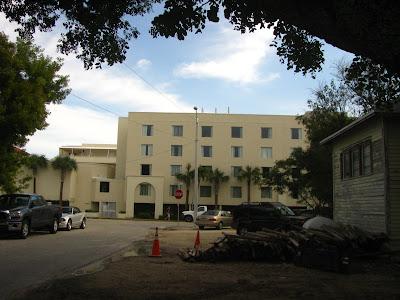 We stumped a couple of blocks along the waterfront and at this corner the dog's owner was sitting and watching as hi beast kept the savage sea at bay. At Vernon Street there is an actual dog beach, modest in size but open to dogs. neighbors like to complain in winter about the noise of dogs enjoying themselves. Anyone who chooses to live on a small crowded island and expects peace and quiet is an idiot, and thank god for them as I'd out of a job if they didn't come down and crowd the place and spend their money. 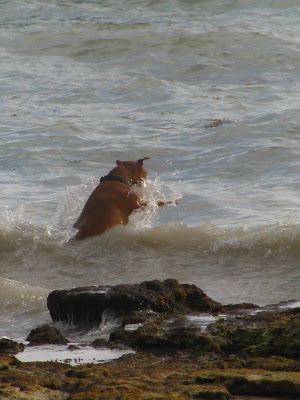 Cheyenne prefers calmer waters because my dog is smart. 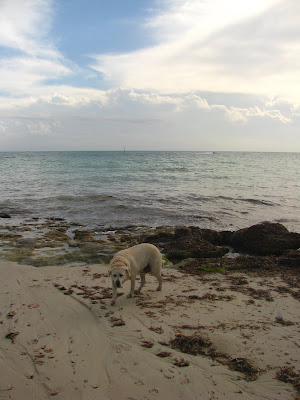 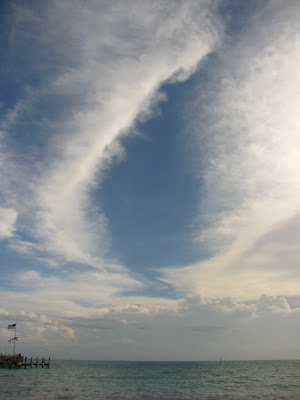 Sunbathing is an astonishingly uninteresting activity to me. For 17 years my wife has wanted a beach vacation and we have instead taken road trips in Eastern Europe, the Balkans, across this country numerous times, Puerto Rico also, a two year sail through Central America, and all she wants to do is this: 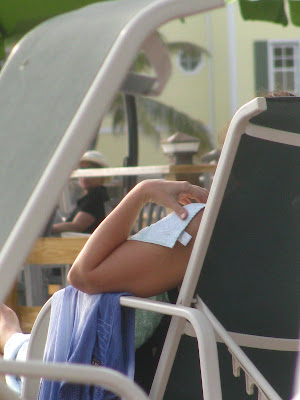 A complete waste of time in my opinion. 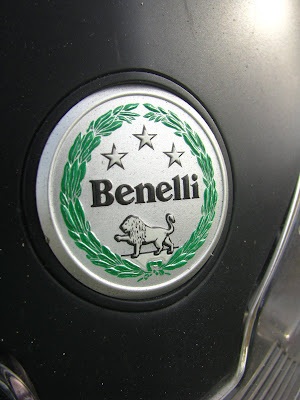 As a former Benelli owner, a Tornado 650 I might add not one of these punk ass Chinese scooters, I was astonished to see this on the street. It looked very nice actually. The Chinese corporation that bought up the Pesaro based factory has been building interesting bikes too, that don't rend to see the light of day in the US. But there was this pocket rocket and it looked nicely made. 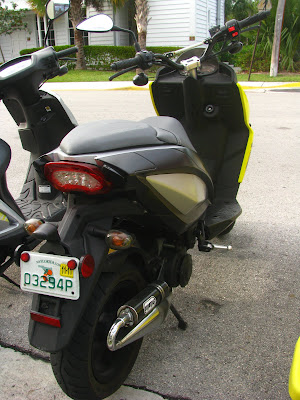 This was myself and my sweet rescued hound Sandy and my green parallel twin circa 1980 in Italy. The Benelli pretty much tore my eyes out of their sockets it was so powerful back then. Actually it was about as powerful as my green Triumph Bonneville today which seems underpowered compared to modern motorcycles. 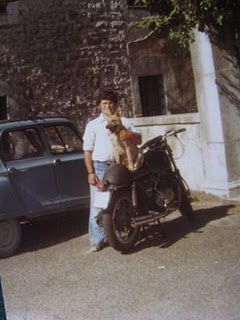 Thirty years ago I was doing the same shit I am today. I doubt that thirty years from now I'll be able to say the same. It would be scary if I could...
Posted by Conchscooter at 12:01 AM 6 comments: Links to this post