I don't know if you remember where you were New Year's Eve the night we switched centuries but Layne and myself along with our two dogs were anchored up the Rio Dulce in Guatemala in the company of some sailors of terrible influence. I am sorry to say we all got drunk out of our gourds that night, though the blame was only partly ours. At least we were without doubt securely anchored in the Guatemalan river mud. 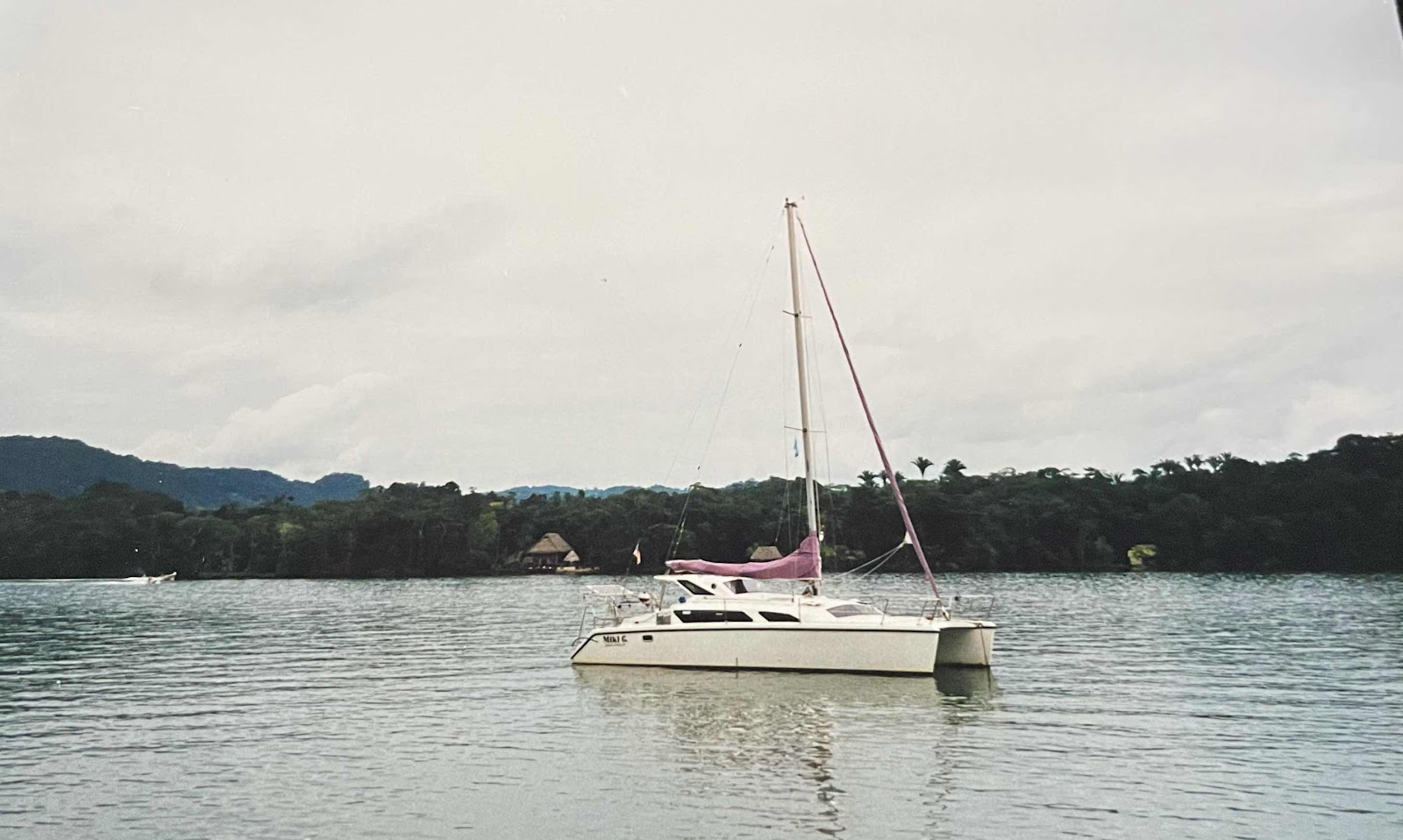 We had sailed under perfect following winds from the Bay Islands of Honduras into the dead end that is Guatemala's very small piece of Caribbean Coast. We anchored behind a spit of land, Punta Manabique, that protected us from the east winds and we spent the night a few miles from the port of entry across Amatique Bay so we could organize the boat and walk the dogs and arrive in Livingston in the middle of the morning with two well rested animals who would be in no hurry to go ashore. We already knew the check-in procedure in Guatemala was very by the book and it was no surprise when a launch put out from the town dock bearing Immigration and Customs officials with their paperwork. Most boats entering the Rio Dulce ("Sweet River") have to wait for high tide as the sandbar is extremely shallow but with our 18 inch draft we motored merrily across four and three foot water without. care in the world. The officials monitored our progress from their aerie above the docks and were quite surprised apparently when we didn't get stuck. 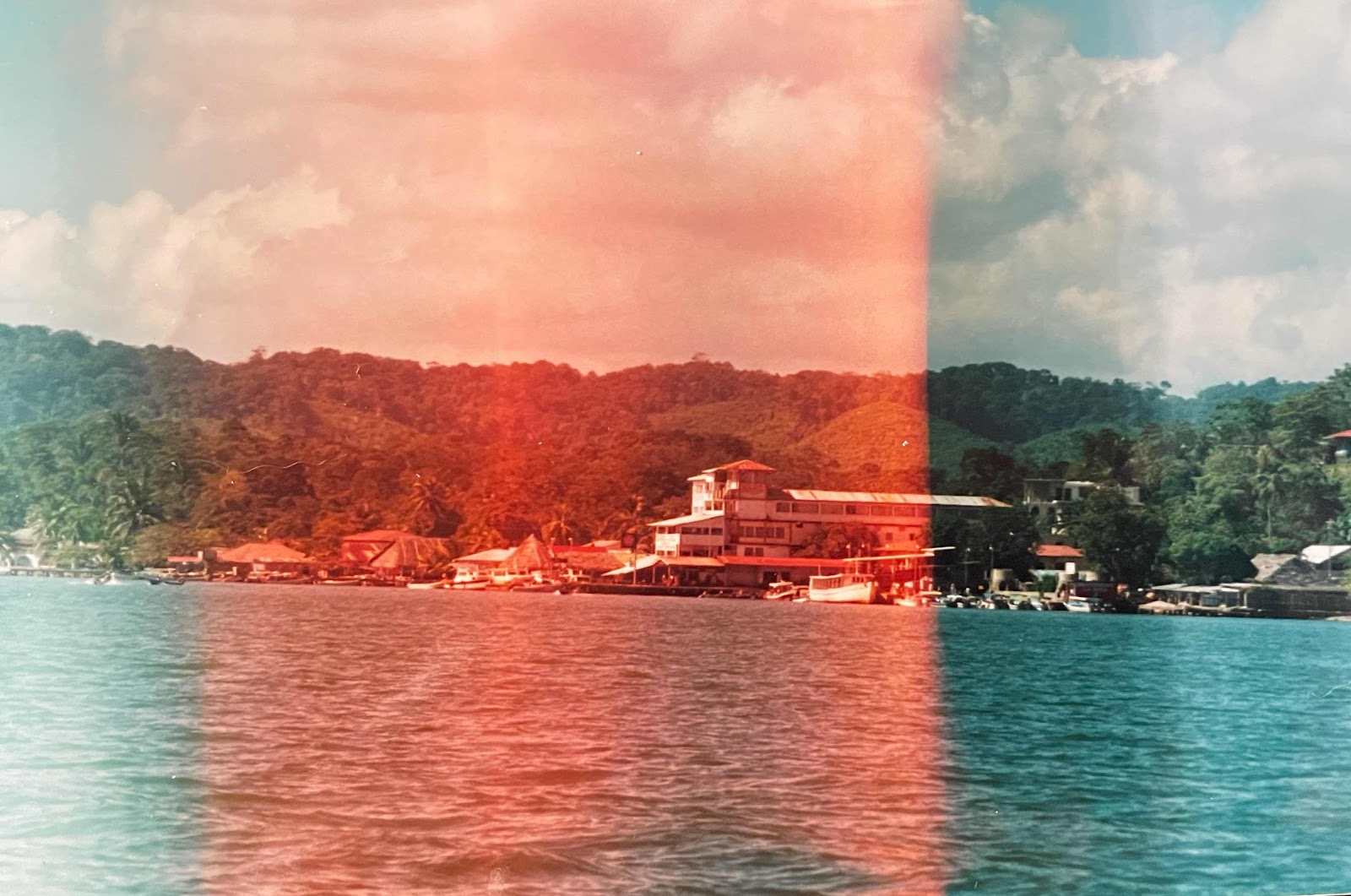 We landed in Livingston on the afternoon of December 31st 1999, not by good planning or anything but merely by chance. The rest of the world was on holiday like us and the town was buzzing. Livingston is one weird place geographically speaking. The city is named for a US lawyer Edward Livingston who wrote a constitution for Guatemala after one of their periodic revolutions when the country tried to institute democratic reforms as we under stand them. However in 1838 a counter counter revolution brought the church back into power and all good plans went to shit as they usually do. The city remained stuck by itself at the mouth of the river accessible only by water. A modern cargo port, Puerto Barrios was built across the bay as a railroad terminus in 1895. Nowadays a hundred thousand people live in Puerto Barrios located at the end of Highway 9, while 17,000 live isolated in Livingston with no road out. 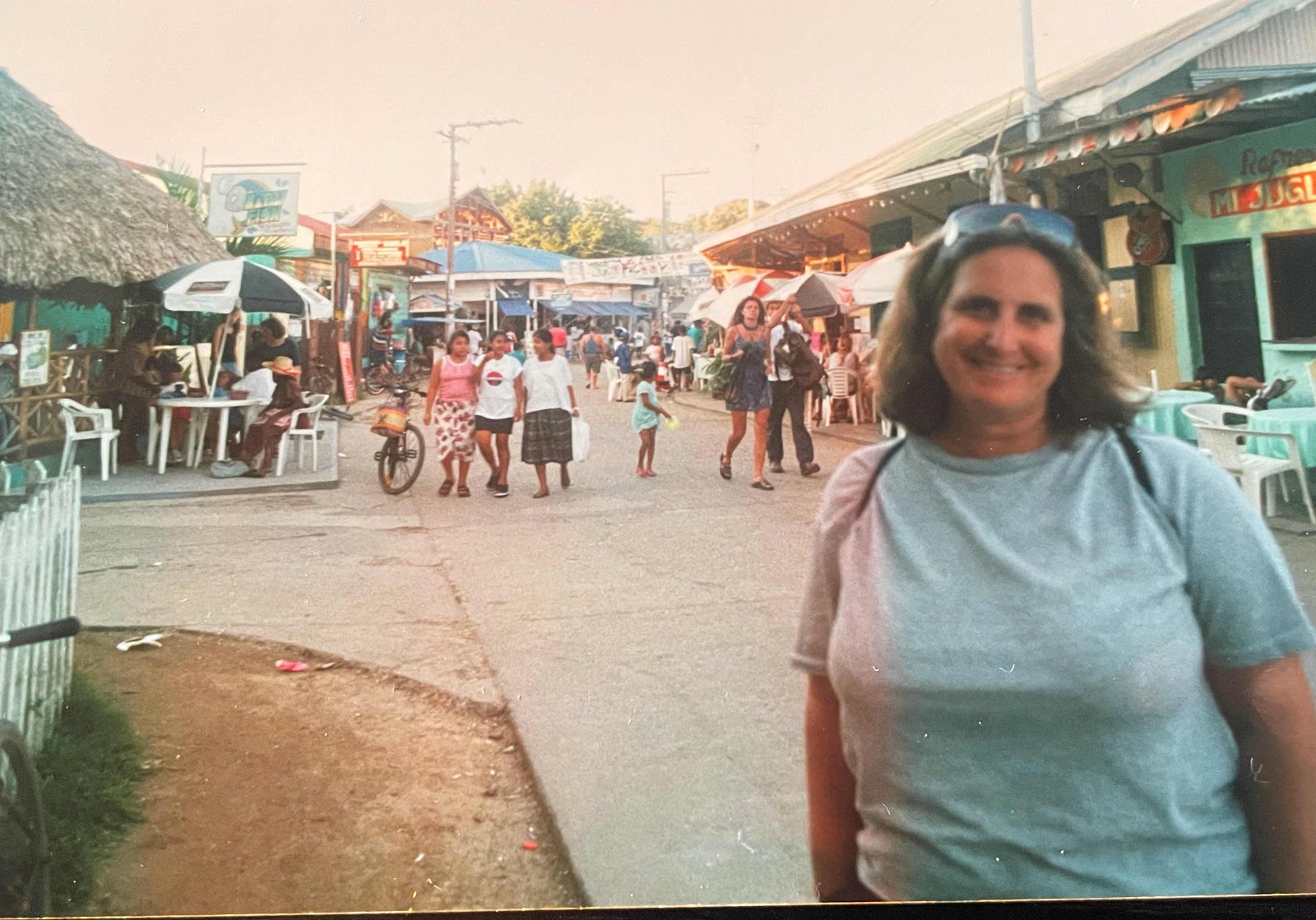 21 years ago Livingston was a hippy town for foreigners and the locals were strongly English speaking as they were part of the diaspora of escaped slaves and forgotten English speaking Garifuna, who inhabit the Caribbean coast of Central America. Apparently the Internet has of course put Livingston on the map since then so my observations may be a bit outdated (!) but we won't be driving there in any event so bear with me. I have always been fascinated by isolated outposts of human culture and Livingston was as much an island as anywhere on the water. I could find out very little about it in those days and I was curious to see what we might find. 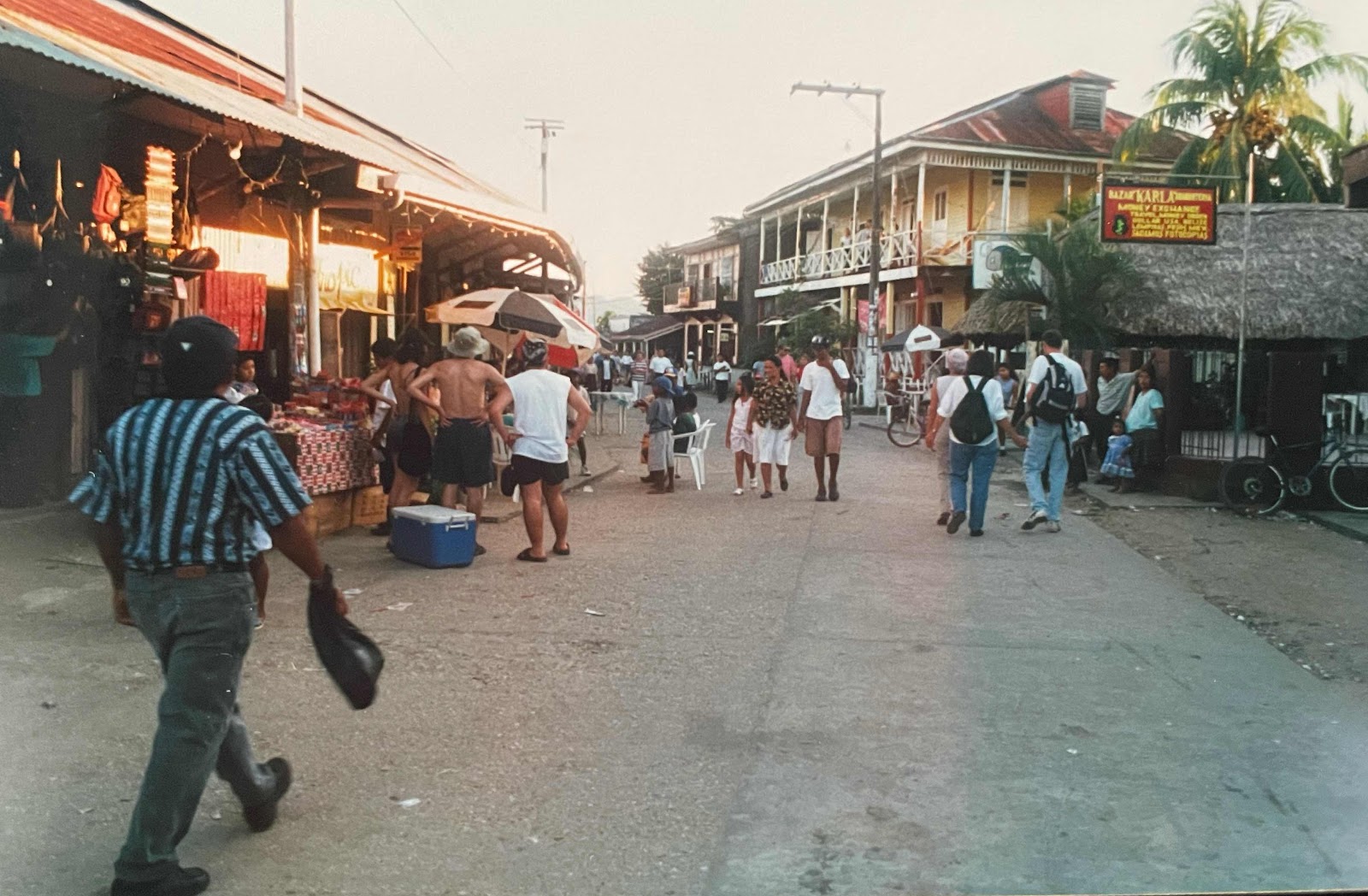 There is a short stretch of road along the coast and the streets are paved so of course there are pick up trucks and motorcycles but the town mostly looks toward the water for it's living. Guatemala has at last stopped treating Belize (British Honduras formerly) as a break away province but even in those days when official maps marked no border with their neighbors, there were water taxis to and from Belize and Livingston, not to mention across the bay to Puerto Barrios. As a cultural island Livingston stood out from the rest of the Spanish speaking country. 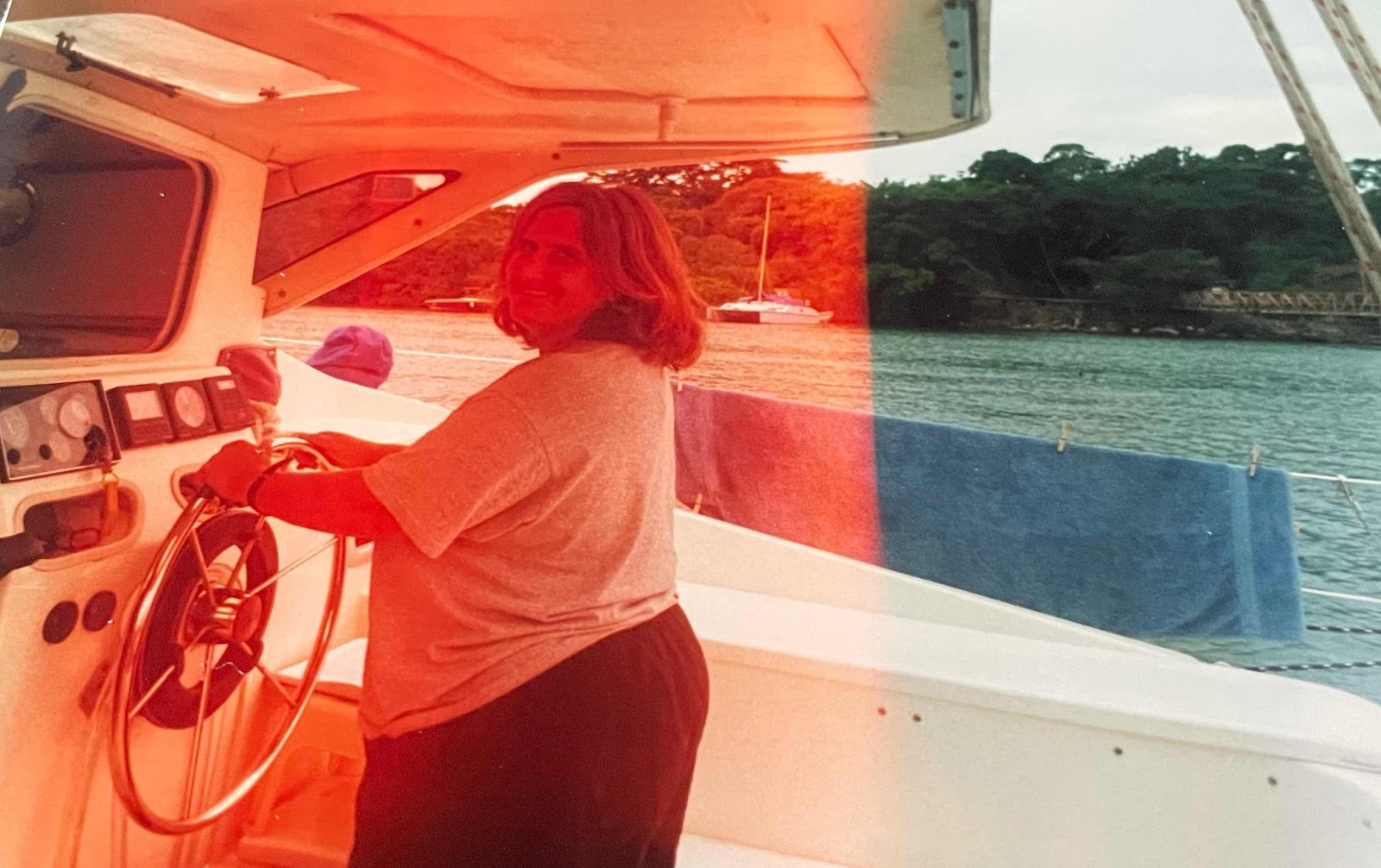 We ate some fried street food that disagreed with us, the only upset stomach we had the entire two years on the journey, and with thick hangovers we took off up the river, an imposing heart of darkness with huge wooded cliffs rising up either side of the gorge. I really enjoyed this exploration as the river was slow and smooth, deep and free of obstacles with scenery we had never seen before. 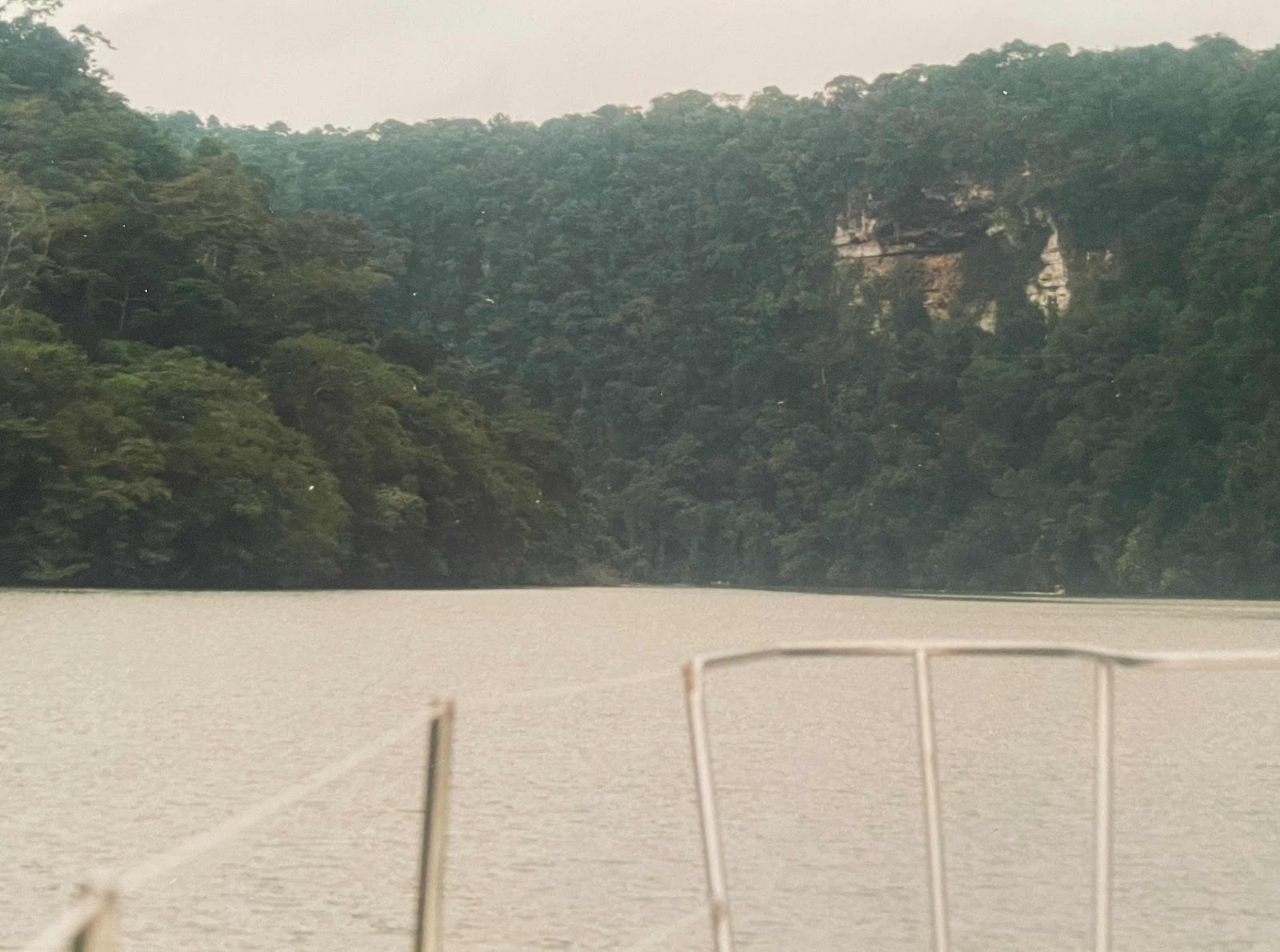 We ended up anchoring a few miles inland where we met a man and his family working as a caretaker of a section of riverfront for some wealthy Guatemalan. The New Year's holiday had put every motorboat in the country on the river and our slow moving sailboat was not at home amongst the roiling wakes and uncertain pilots. our sailing partners on this leg included a young Venezuelan woman seen here drinking from a coconut and she got us invited on a trip to a bat cave. 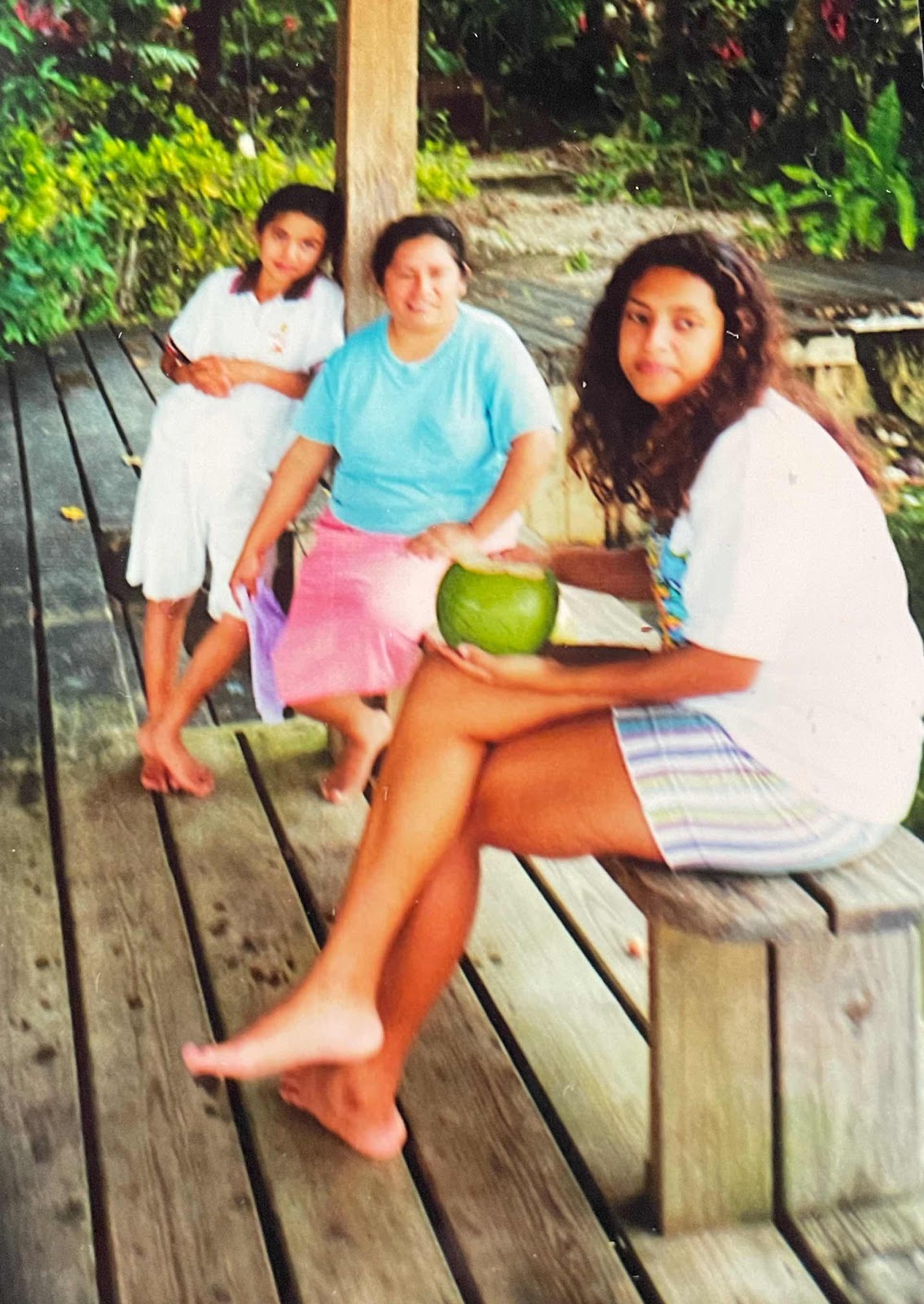 Antonio's family lived a rather medieval existence on the water hemmed in by jungle covered cliffs which may appear idyllic but lest you forget it is not always huge fun being isolated from modern conveniences. We had tiny batteries and minimal electrical features on our boat, lights and fans basically with a tiny TV and DVD player and a couple of solar panels to keep us charged. They had next to nothing. 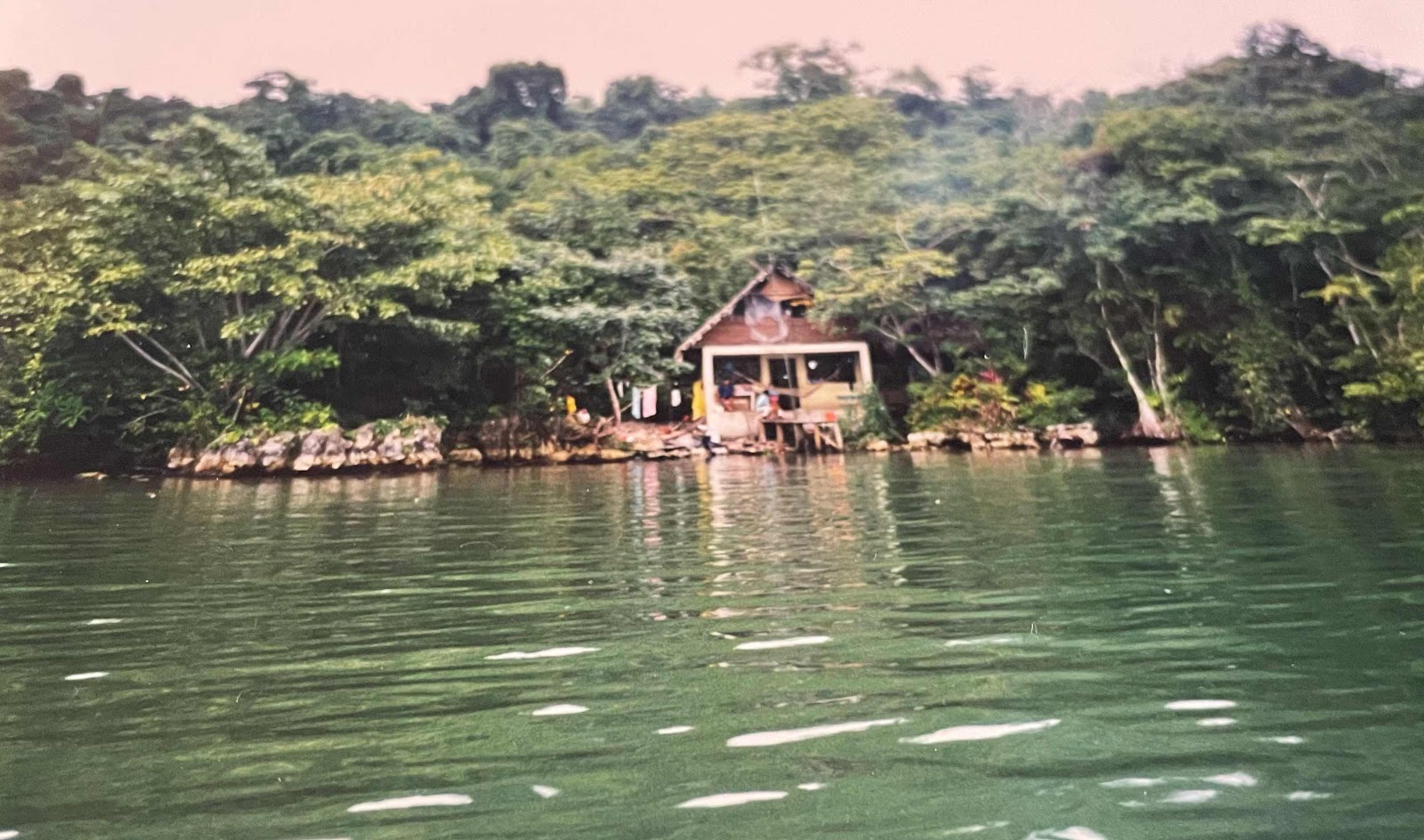 We were always ready total the dogs for a walk and they of course adapted to the weirdness of a boardwalk through the woods: 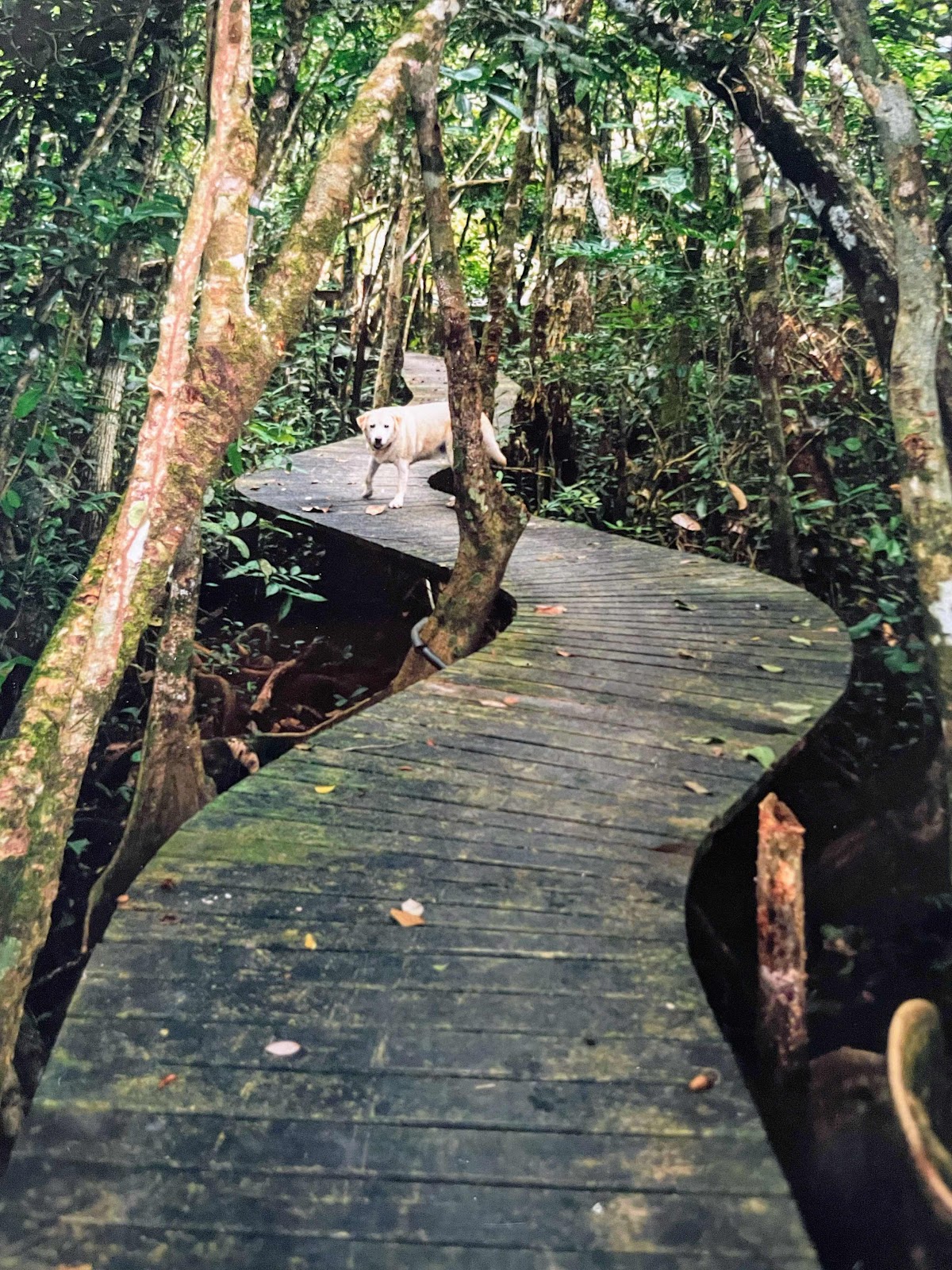 The drive to the town of Fronteras continued past homesteads on the banks that gave our journey the feeling of being more time travel than a journey through physical space. 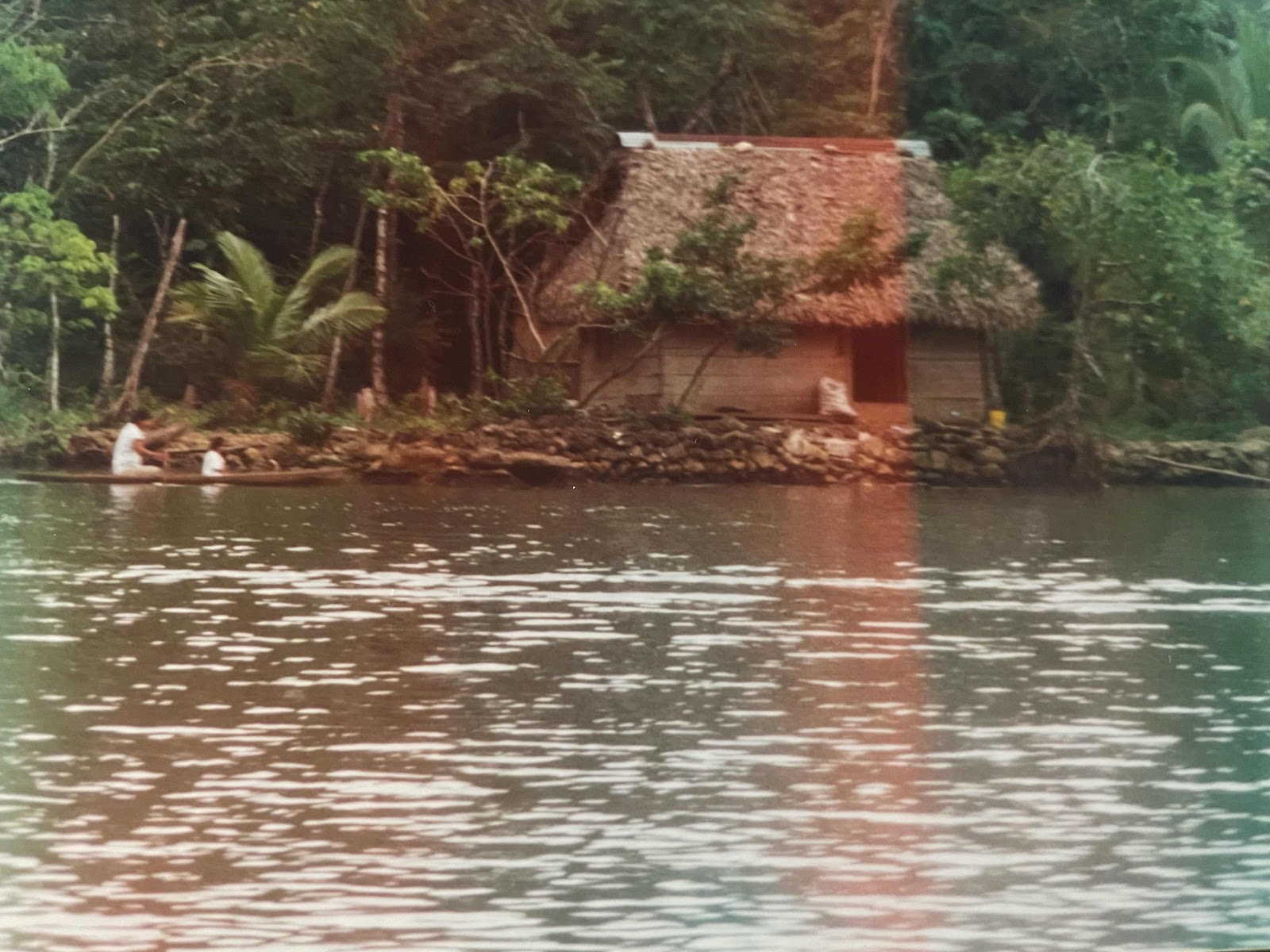 Then of course the Guatemalan Navy put in a New Year's Day appearance, barely caught by my camera that was still letting in light unbeknownst to me. I really do enjoy digital photography despite what the nostalgia photographers will tell you. 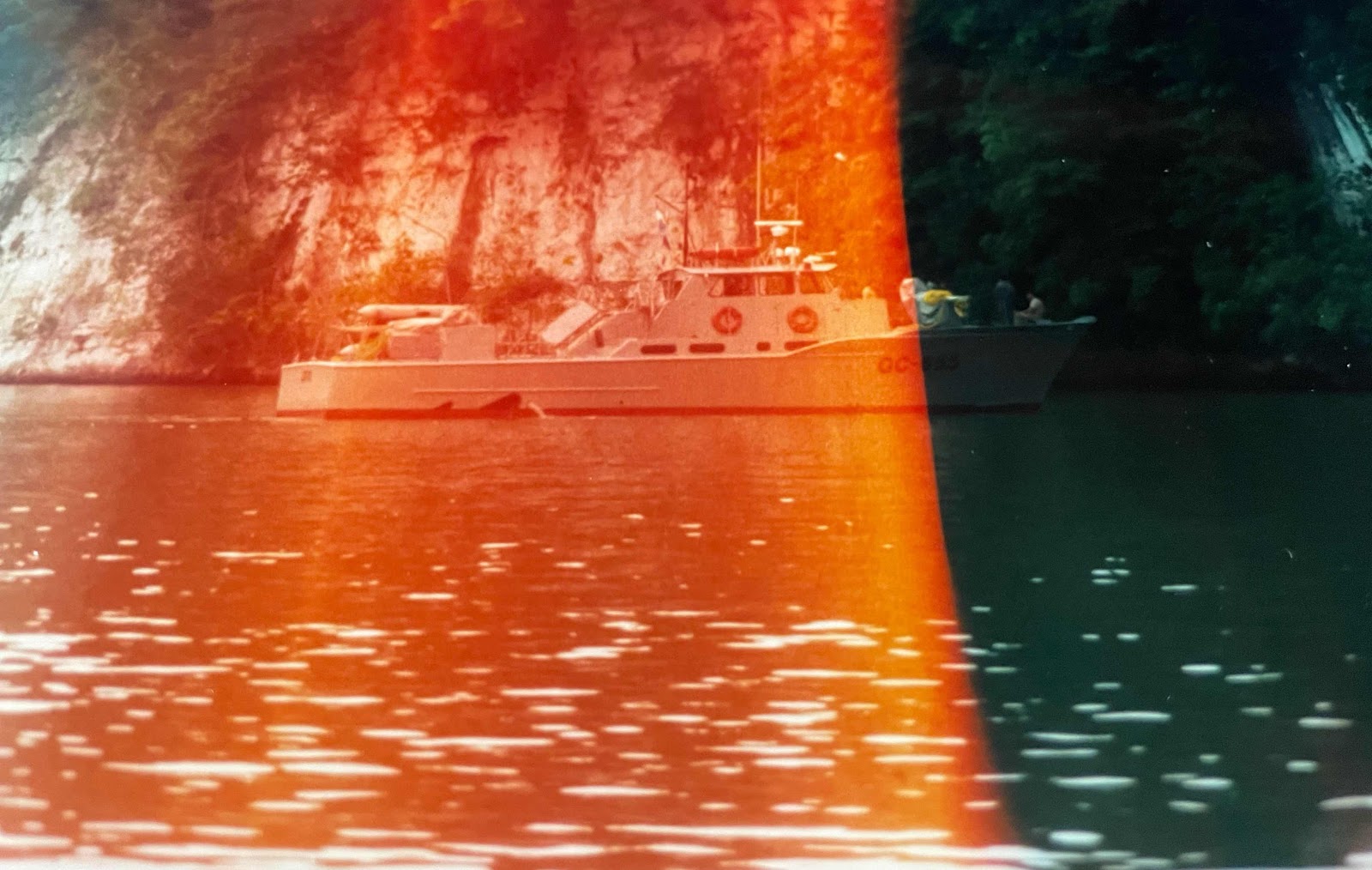 You can measure poverty by propulsion because anywhere there is fishing you will find outboards, mostly Yamahas to power the means to earn a living. On the Rio Dulce in the year 2000 it was all paddle power. 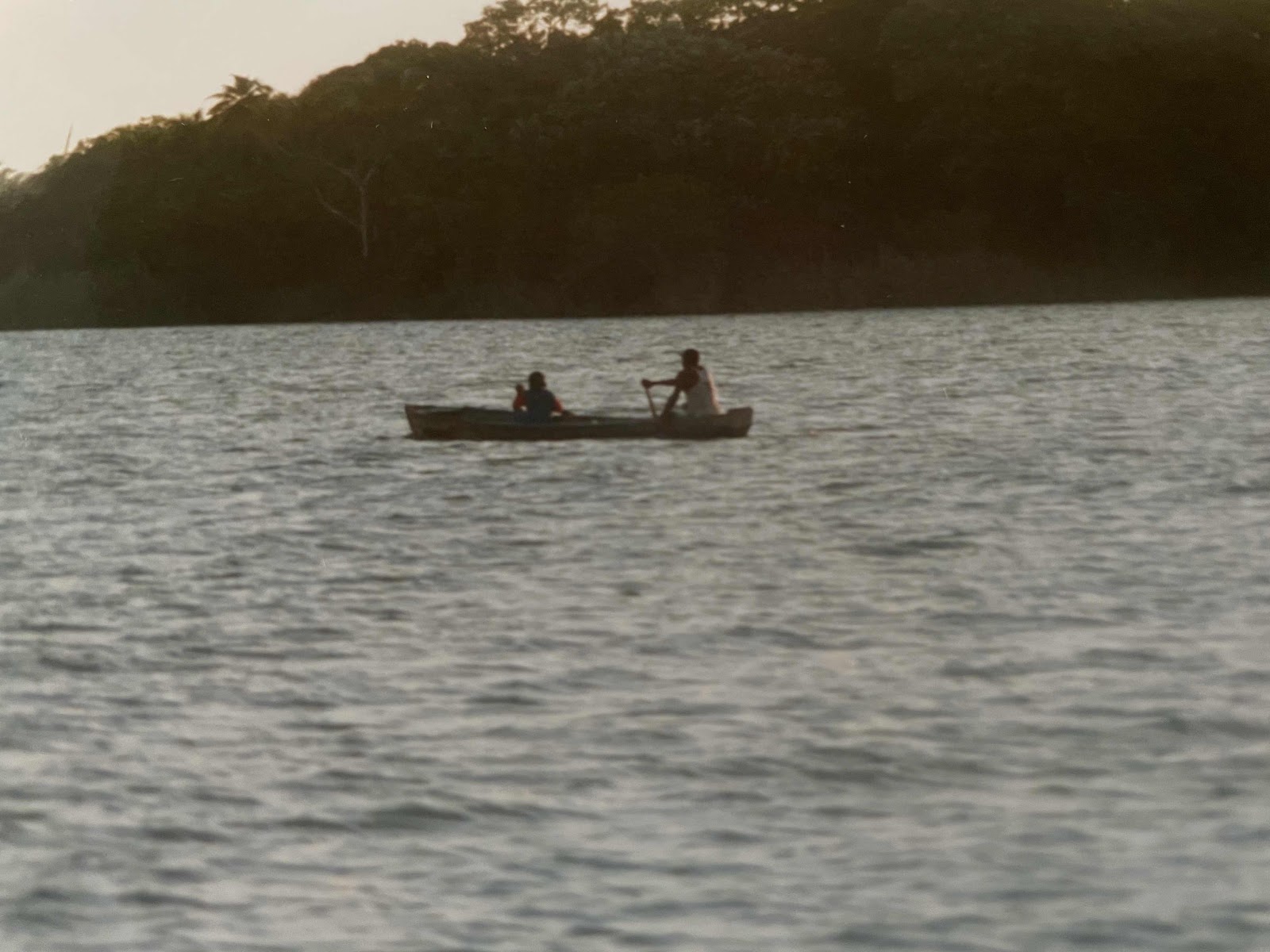 The bridge over the river at Fronteras was a very modern piece of engineering so we had some notion we had arrived somewhere. Then we saw marinas and sailboats with Canadian and American flags. Fronteras it turns out is one of those places where many sailors go but not all of them can figure their way out. The Guatemalans used their initiative and created a place with services, a bus line and a place to calla. refuge in hurricane season. 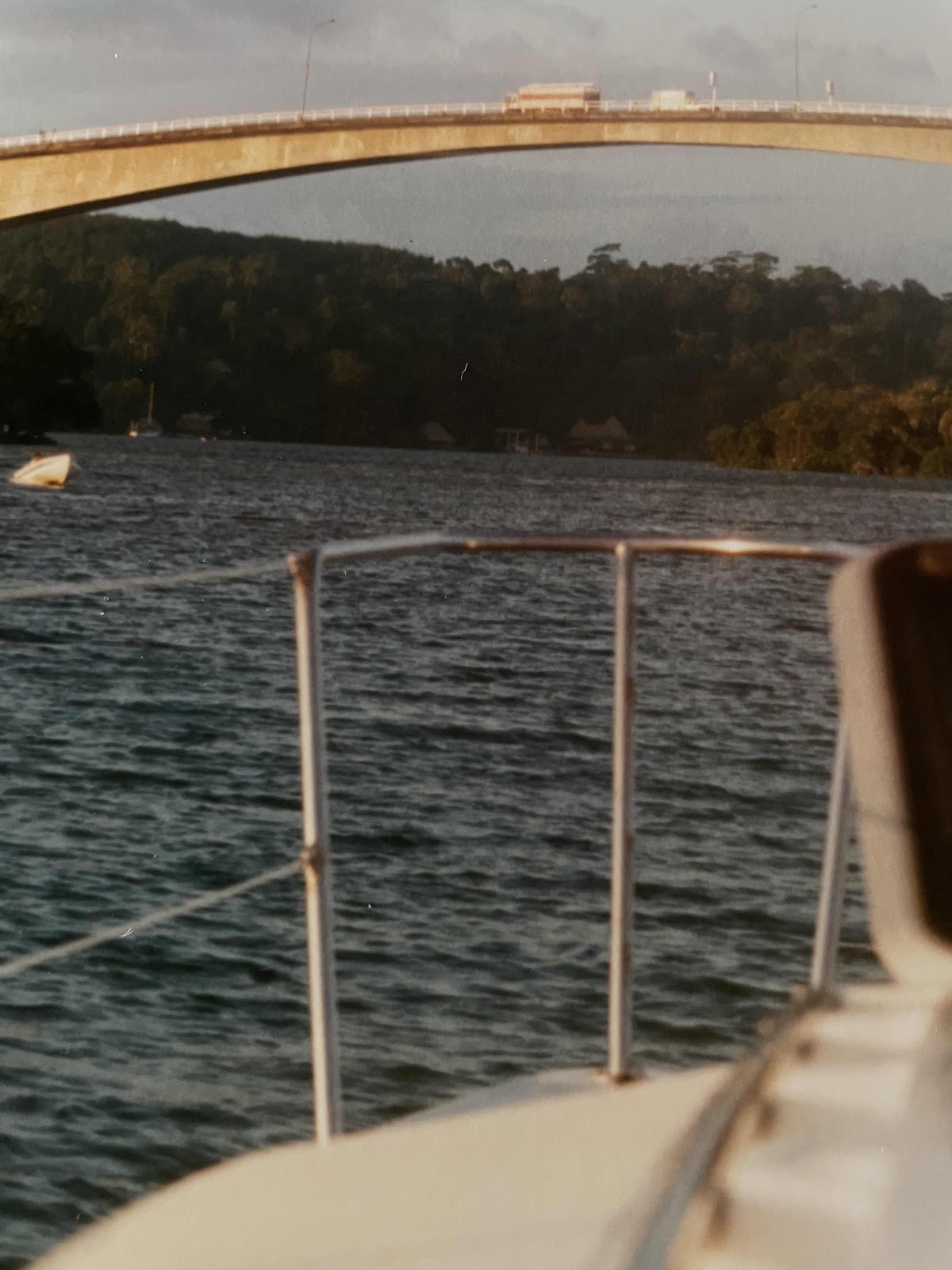 We saw a place to rent a car to explore the interior, which my wife had visited as a callow youth and was anxious to see once again. Meanwhile we took a trip up the river to the Lake which was essentially the end of the road. 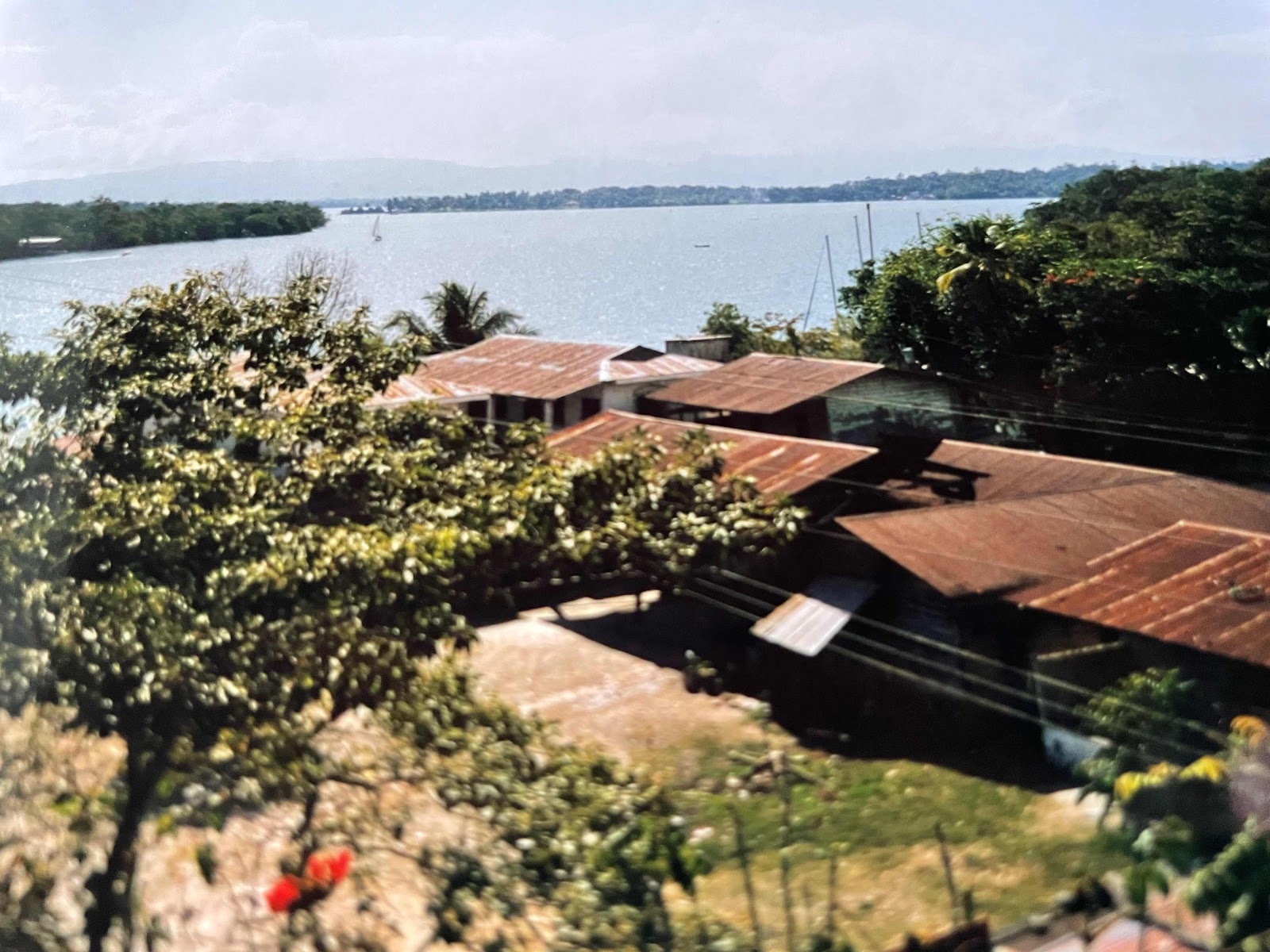 Fronteras was your average modern agglomeration of stores, restaurants and people crowded along the highway. Oh and good old fashioned shoe shine boys. Boys who should have been in school but were earning pennies for their families instead. Not a particularly bright future for them, then. 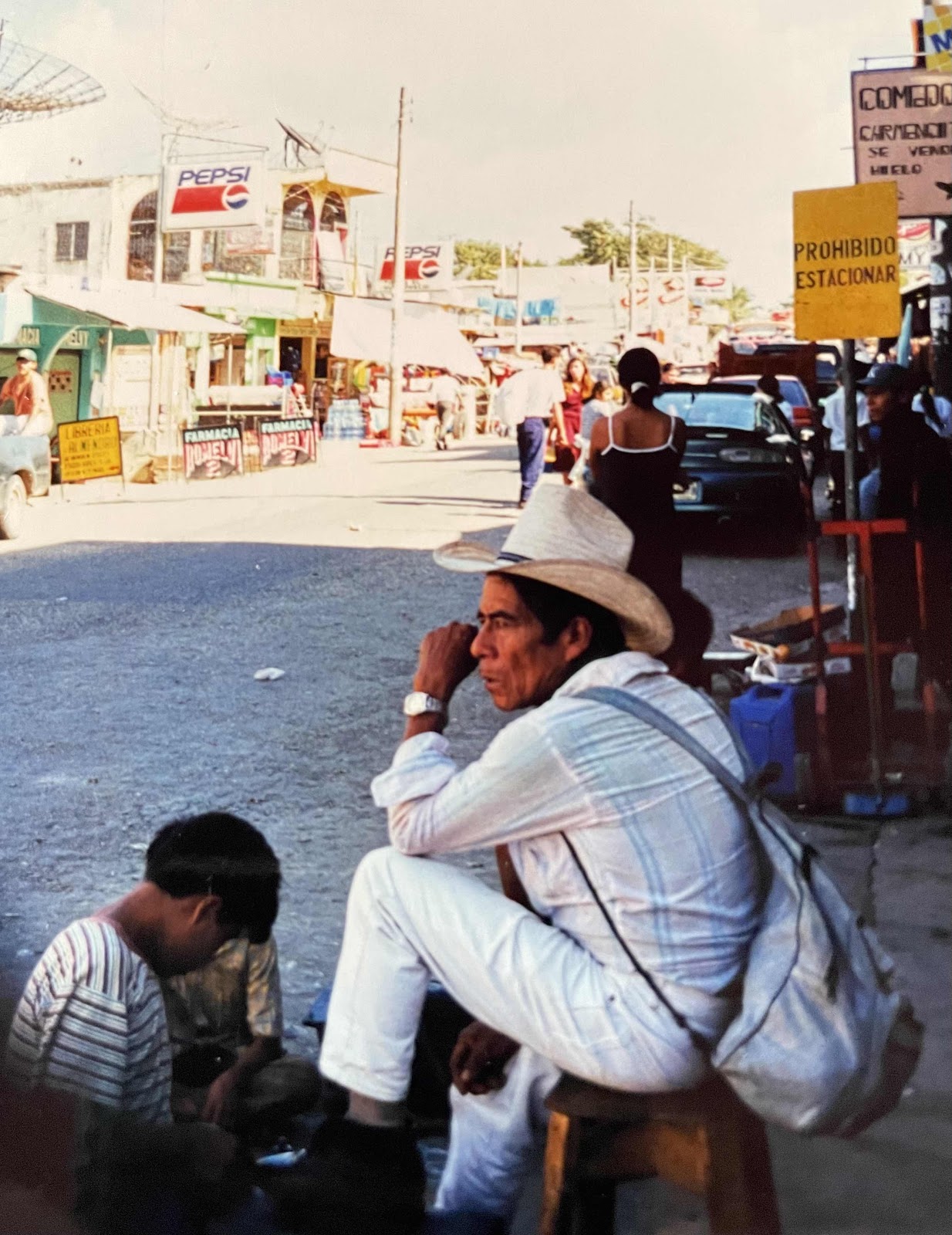 I made my mark when, over lunch I posed the question to my wife, why did the roast chicken taste so much better here than in the US, whither we were bound at last and in a few weeks. She looked at me like I was an idiot and pointed out patiently they baste their meat in lard that imparts flavor and calories and would never be acceptable in the calorie conscious world we normally inhabited. 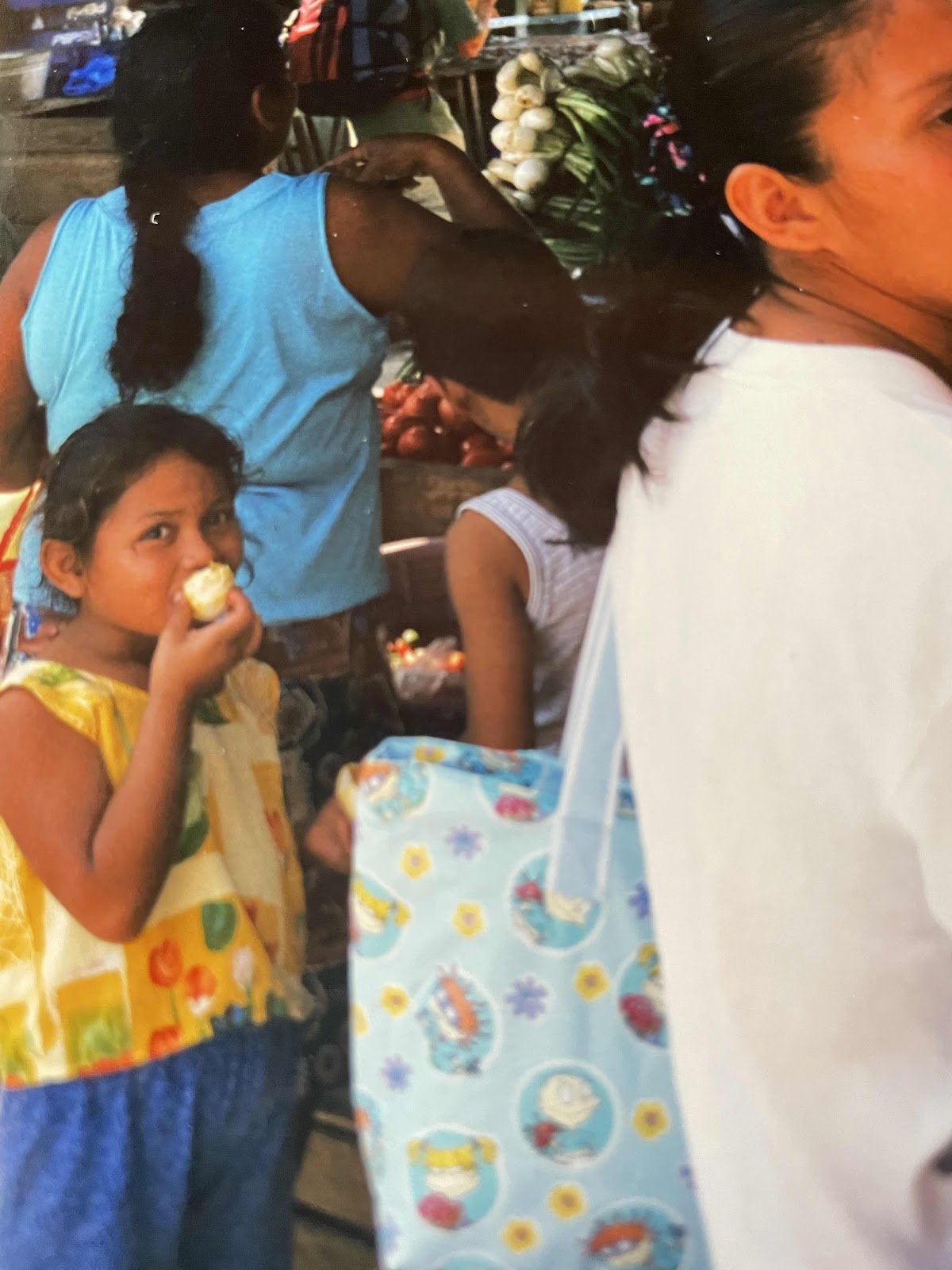 The thing about exploring by boat is that you have to walk everywhere, any time you ever want to seek out something, be it a part for the boat or a museum for the mind.  We walked like you wouldn't believe in those years, and I will tell you honestly our plans to travel by van will be immeasurably easier because we will be able to drive our 21 foot box almost everywhere.  We might walk a mile to see a movie, e might carry bags of groceries across town to get them back to the beach where our dinghy waited for us. We had to walk the dogs and they loved the less attractive parts of town. 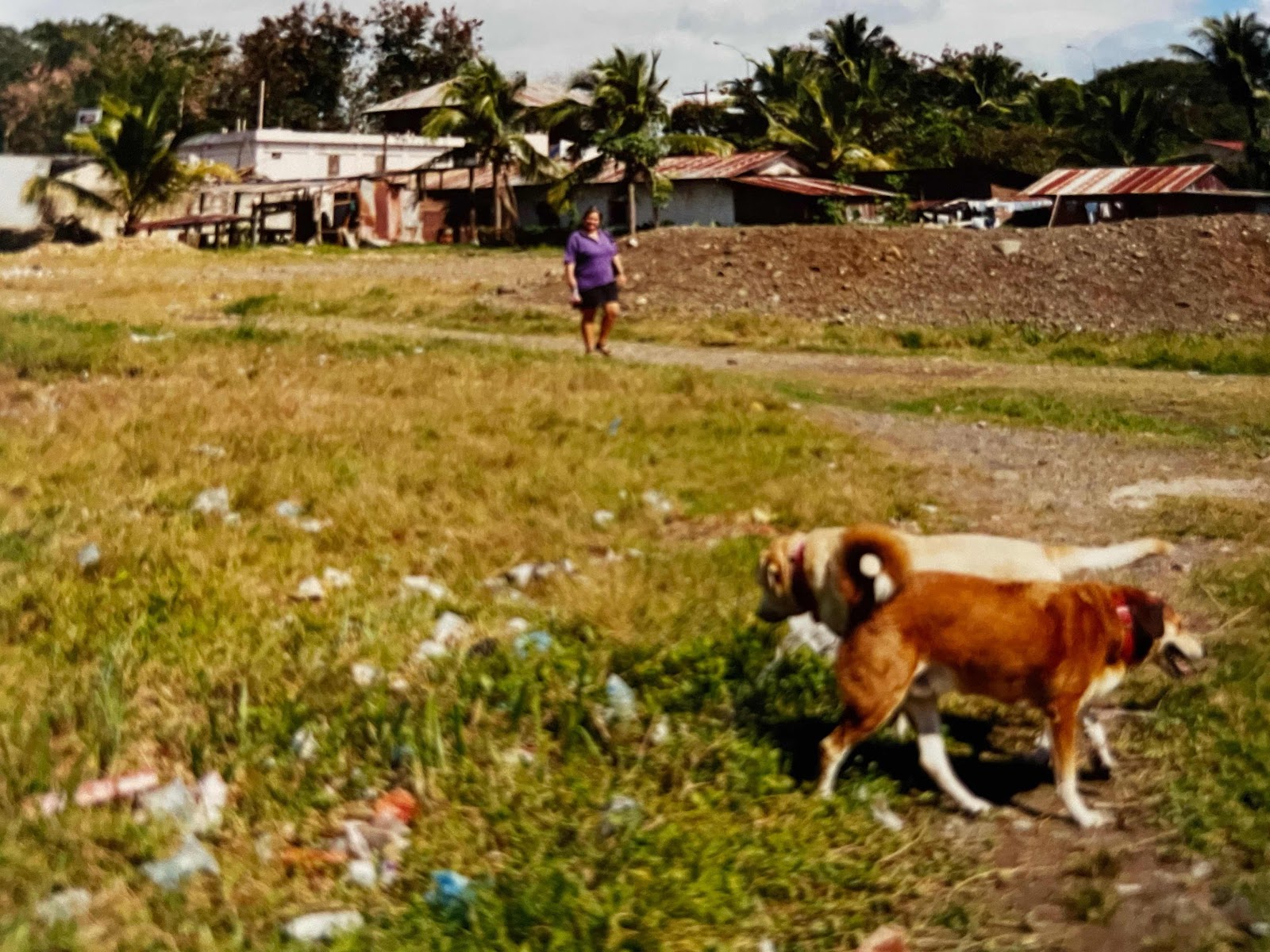 We swam too and cool fresh water in abundance was a treat. 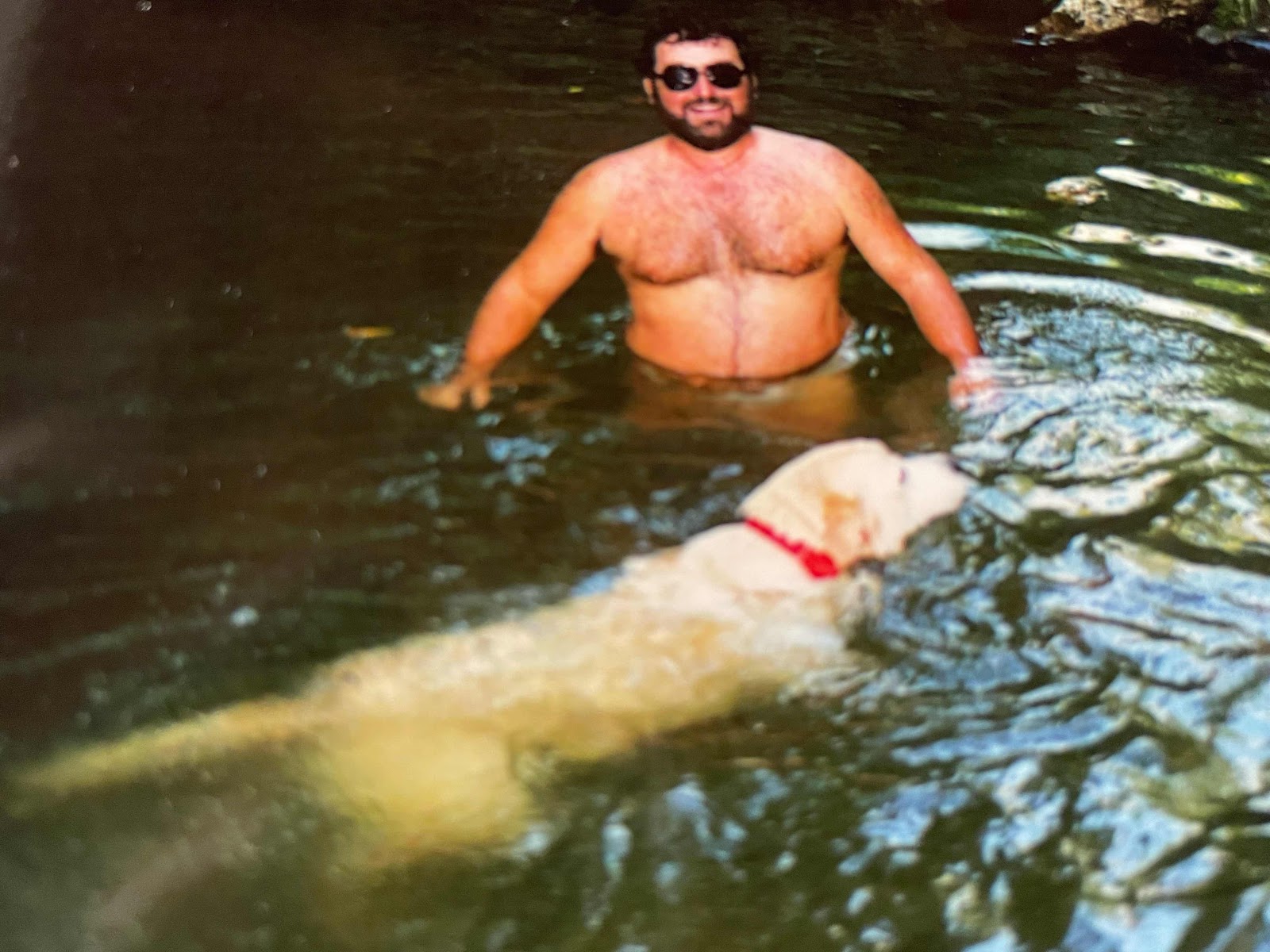 Lake Izbal is a large body of fresh water that feeds the Rio Dulce (the sweet water river) and the Spanish, in order to protect their conquests from English pirates built Fort San Felipe at the mouth of the lake. I wanted to at least see this infamous lake and sail Miki G around a bit. We did that and scuttled back to boring Fronteras after a quick scout on the lake. 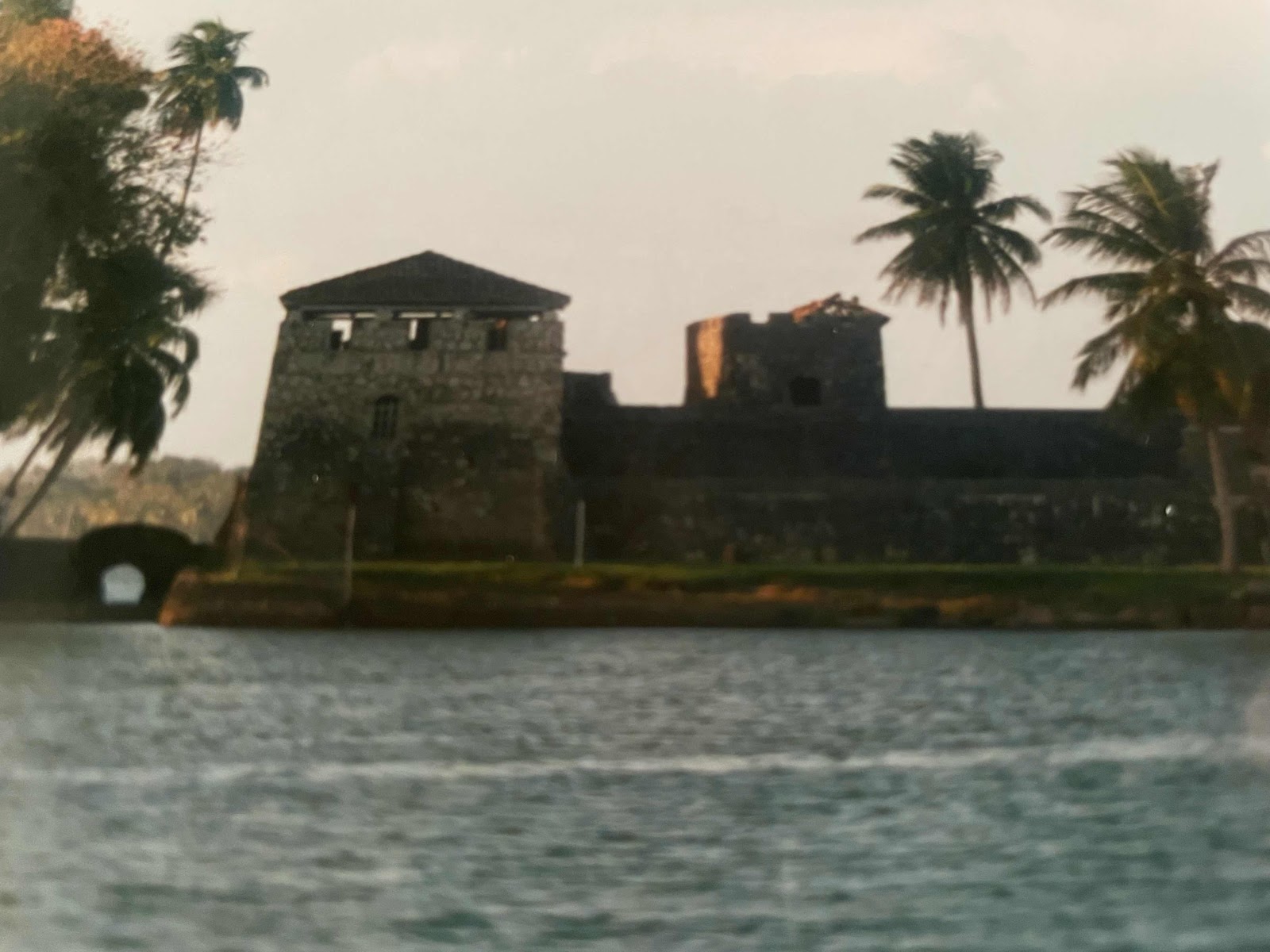 Lake Izbal is a big oval surrounded by reedy shores and farms and not much else. We had heard reports of modern piracy on the distant shores with fishing boats coming alongside isolated anchored sailboats and their crews helping themselves to the contents. I have no idea how true the stories were but there was nothing attracting me to go deeper, or to spend the night there so we turned around and went back to a marina slip with easy dog access to the land, always a plus. 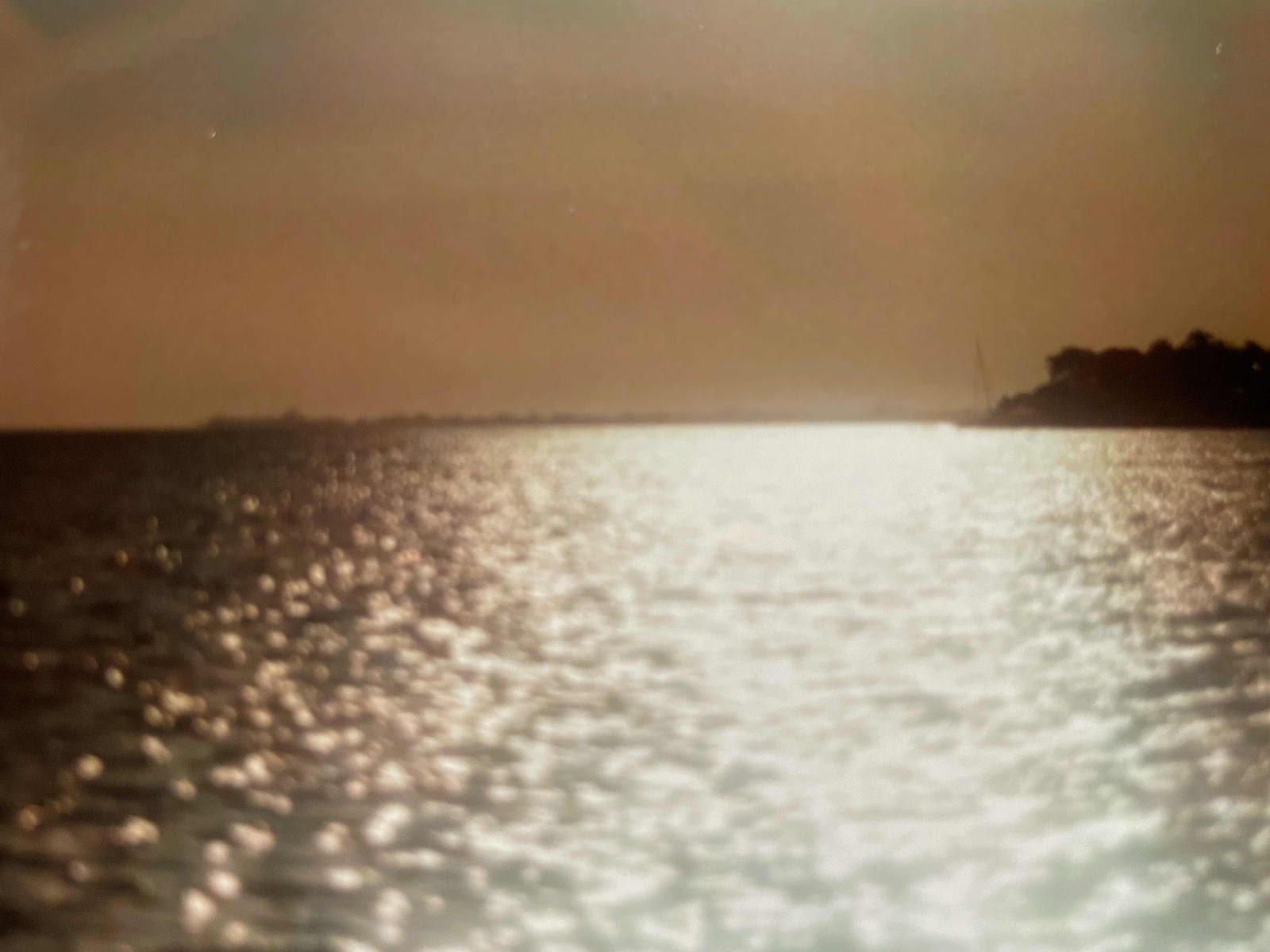 Next up we drive across Guatemala to the most beautiful lake in the world according to Aldous Huxley and we stayed in places so cold we fought over which dog to sleep with to keep us warm. The Guatemalan highlands were quite different and quite chilly in January.
Posted by Conchscooter at 12:00 AM No comments: