The theory is if you come to Mexico you will be forced to pay bribes, you will be otherwise robbed and set upon by hordes of locals anxious to enjoy the fruits of your expensive gringo lifestyle. That’s the theory. 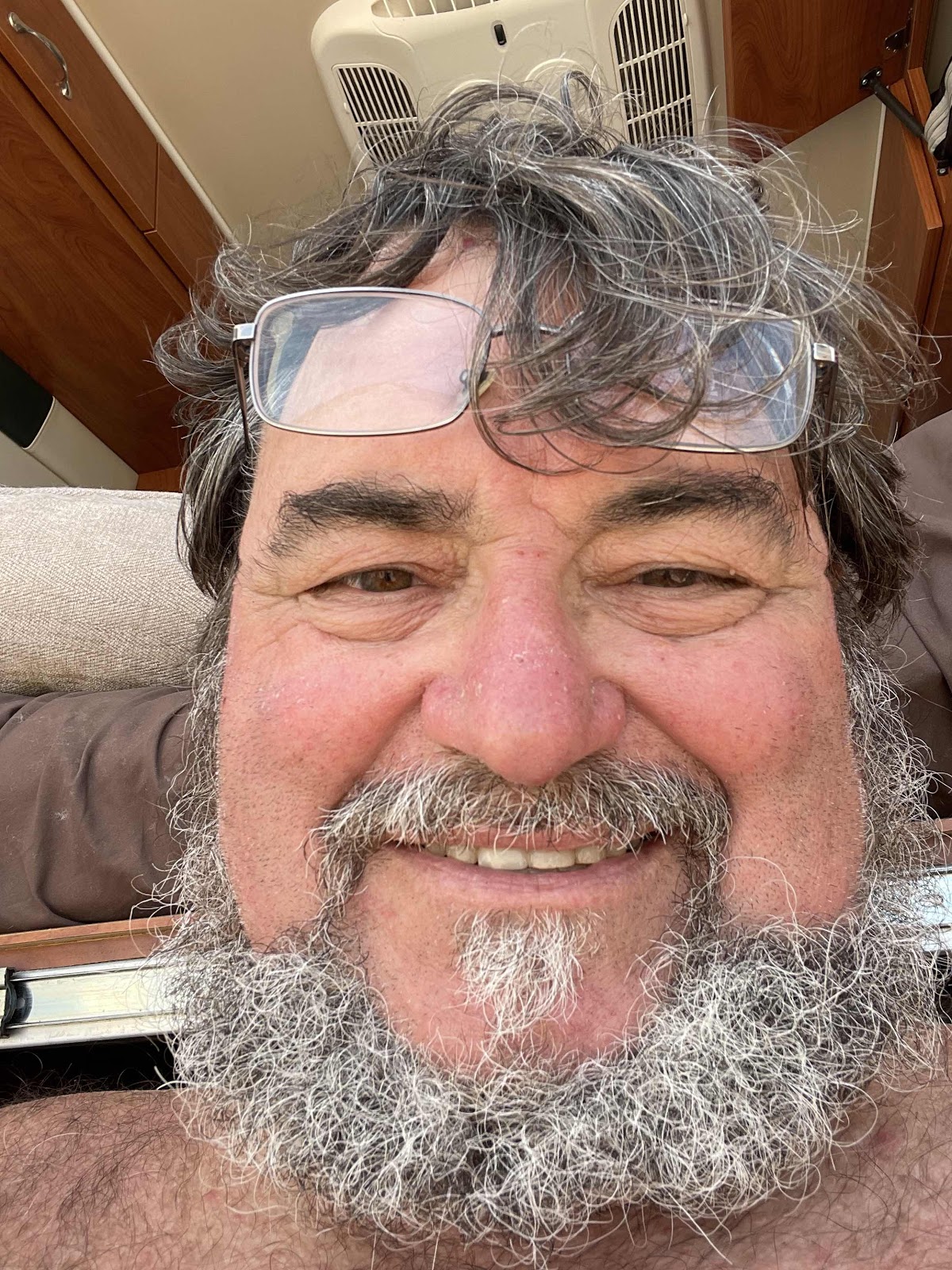 So far we have avoided the negative stereotypes but I have fallen hopelessly into the positive stereotype of the happy retiree. I have always wrinkled my nose at retired people who “need to keep busy.”  I’m happy with a book on my phone and a sunny day. We don’t have enough money to hire staff or to run an organization but we have enough to live. 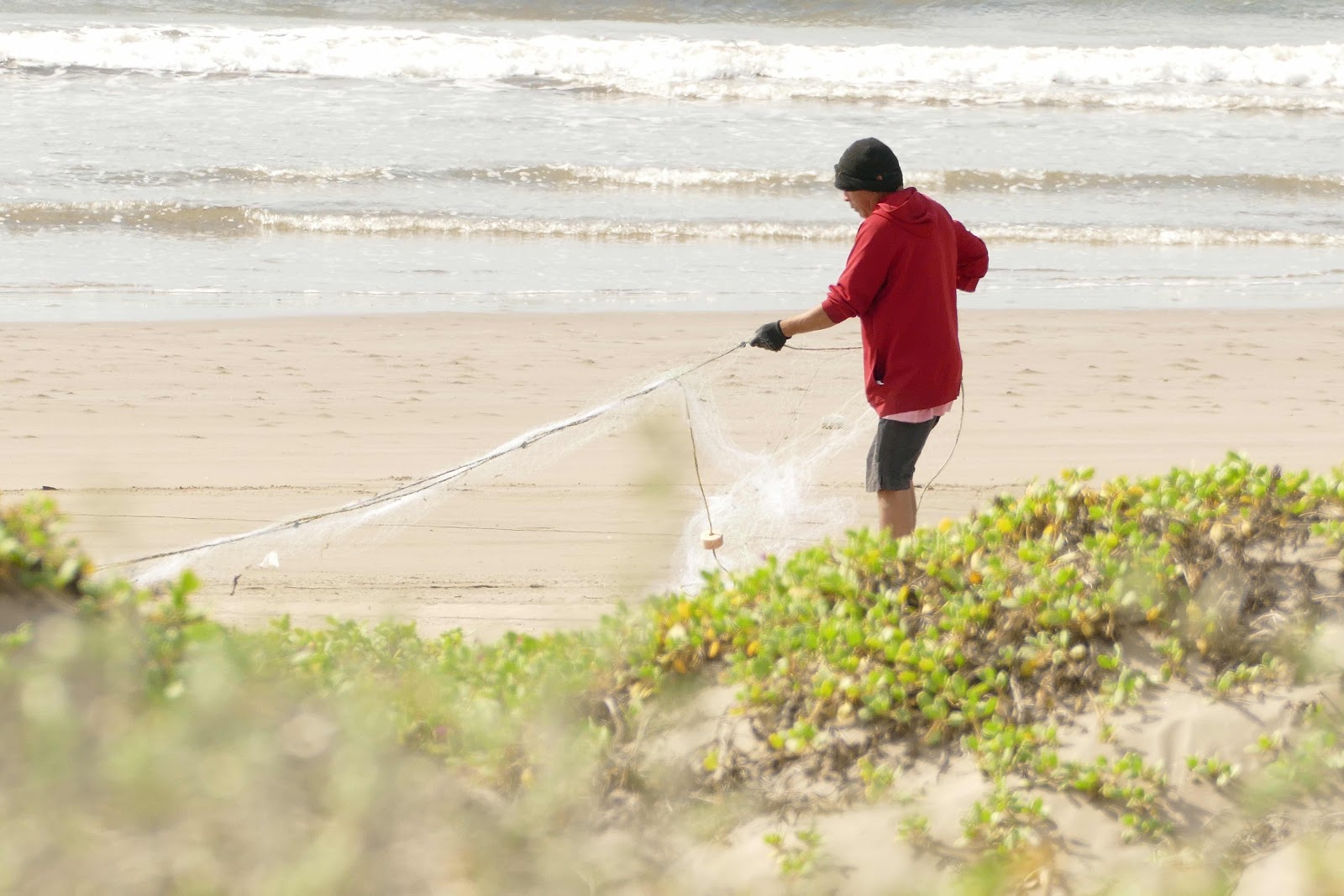 Then you see a Mexican standing on the beach sorting out his nets. He puts a sack full of sand on each end as an anchor and then they walk the net out into the water. In January. I have no idea what their retirement plan is but I suspect it involves doing the sane thing until you are too broken to continue and you hope your sons are in a position to look after you. 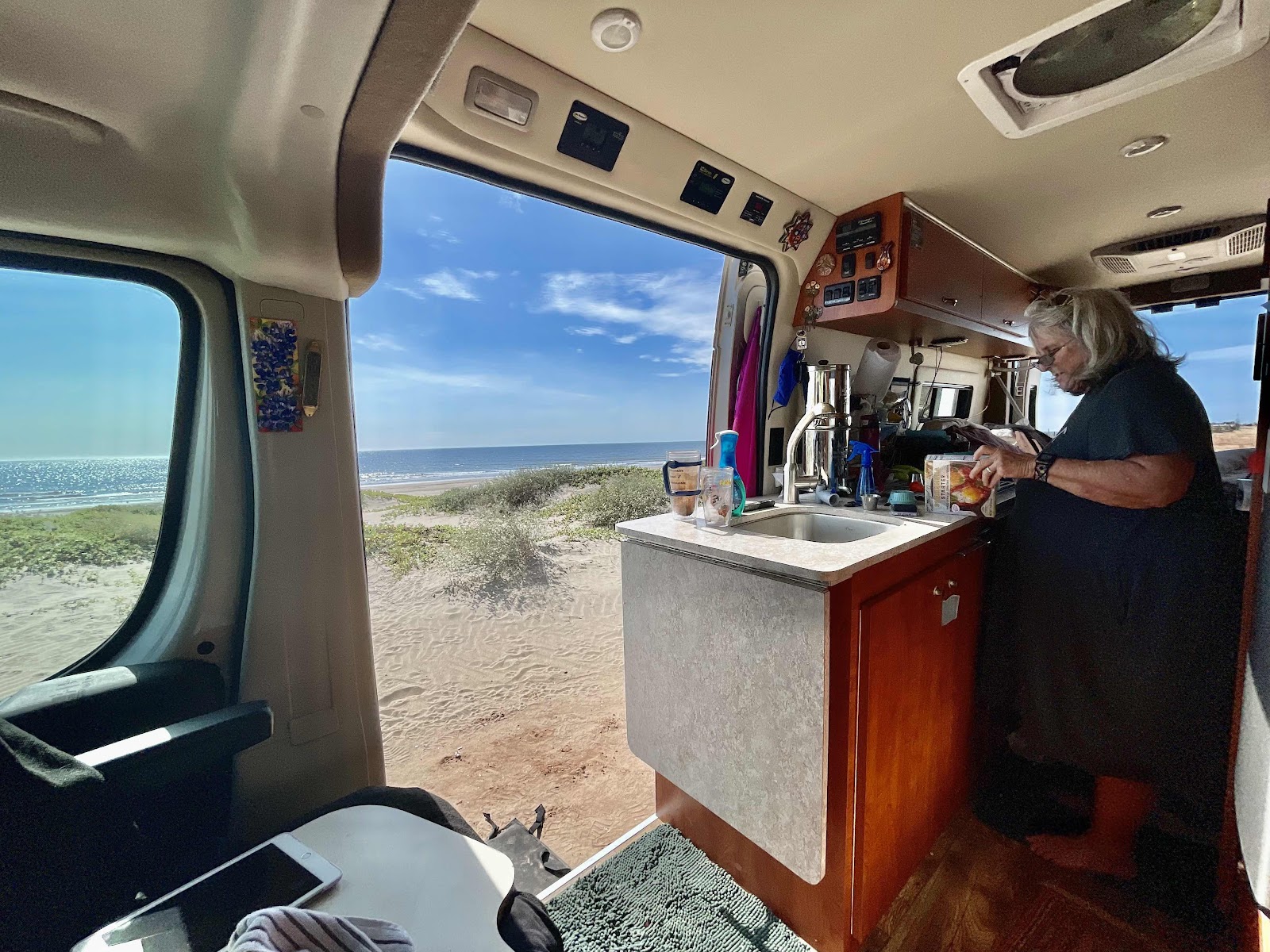 We live in a two million peso van with all the modern conveniences and no debt. Imagine what you have at home compared to a man who lives with an electric light bulb and a propane burner and a dirt floor. We’re the lucky ones. 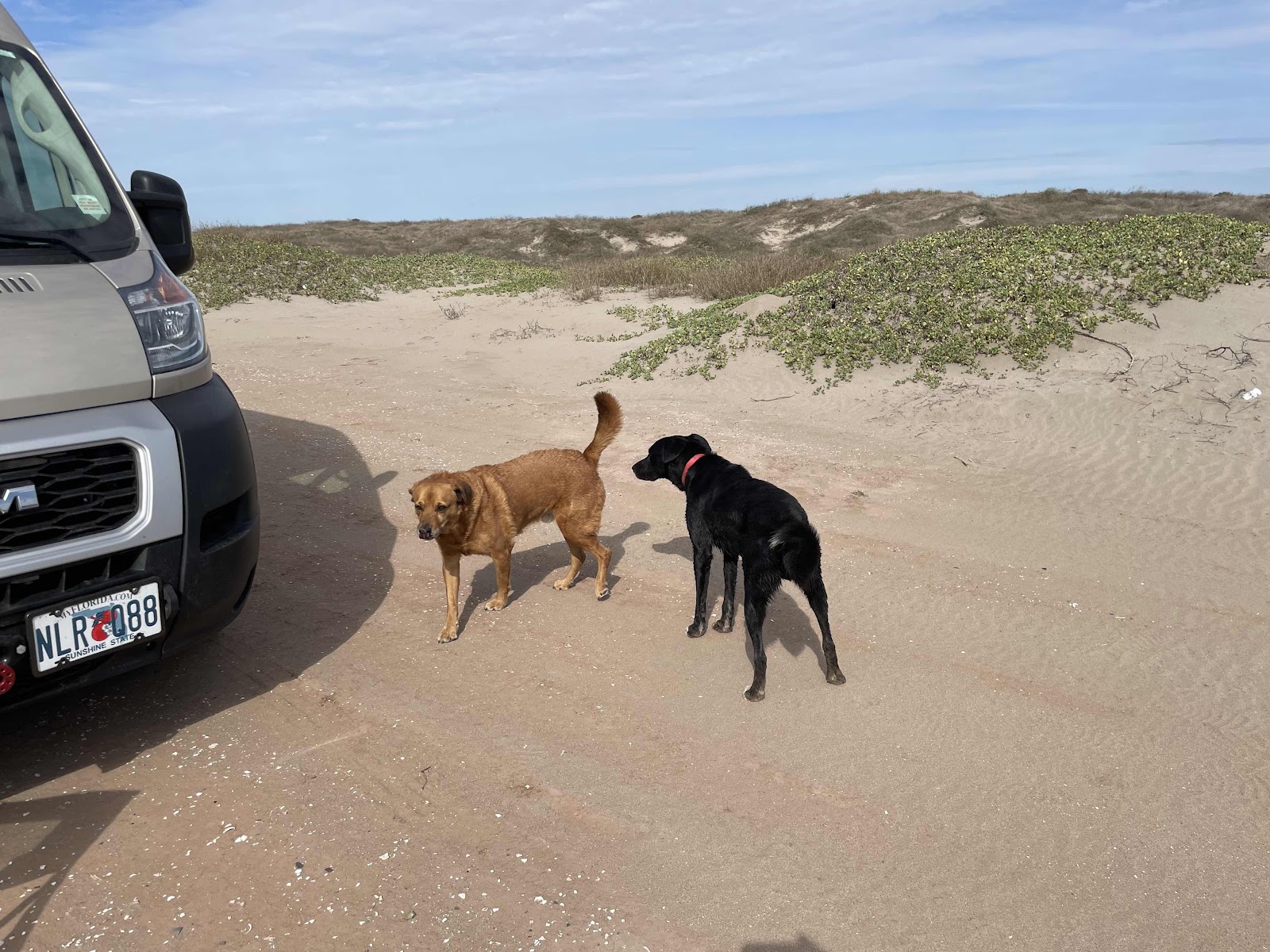 Rusty does all right compared to local dogs. I gave this one some food which he enjoyed but didn’t finish. Rusty was not happy and saw him off even though I was careful not be affectionate with the black dog with a collar. Later Rusty saw a couple of local dogs wandering this way at our end of the road and he got to his feet, fired his afterburners and took off barking like a local. They ran. He sat in the road and made sure of their intentions. I was slightly amazed. My dog is becoming a local. Of course he gets proper meals, treats, affection and of course room inside our home any time he wants. Mexican dogs though not actually strays are not so lucky when their owners are on the lower social strata. 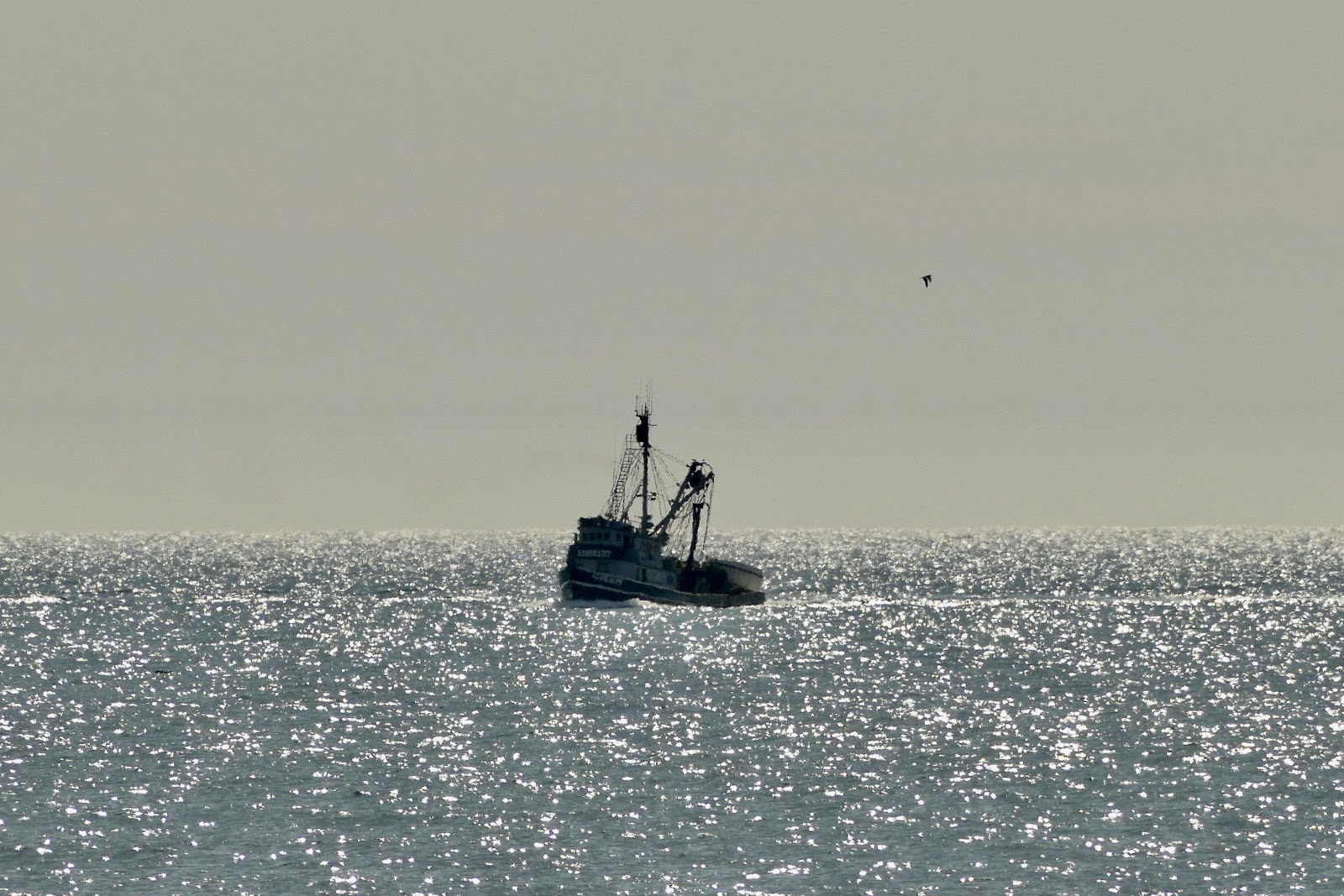 We were hanging around on a hot sunny morning yesterday feeling lucky to have a bright day mediated by a cool fresh breeze blowing through GANNET2. No sweat and no shivering made it a perfect day. Then we saw a Mexican walking toward us. We knew this spot was too good to be true and each of us, independently of the other, made plans to pack up and get going from this idyllic spot. 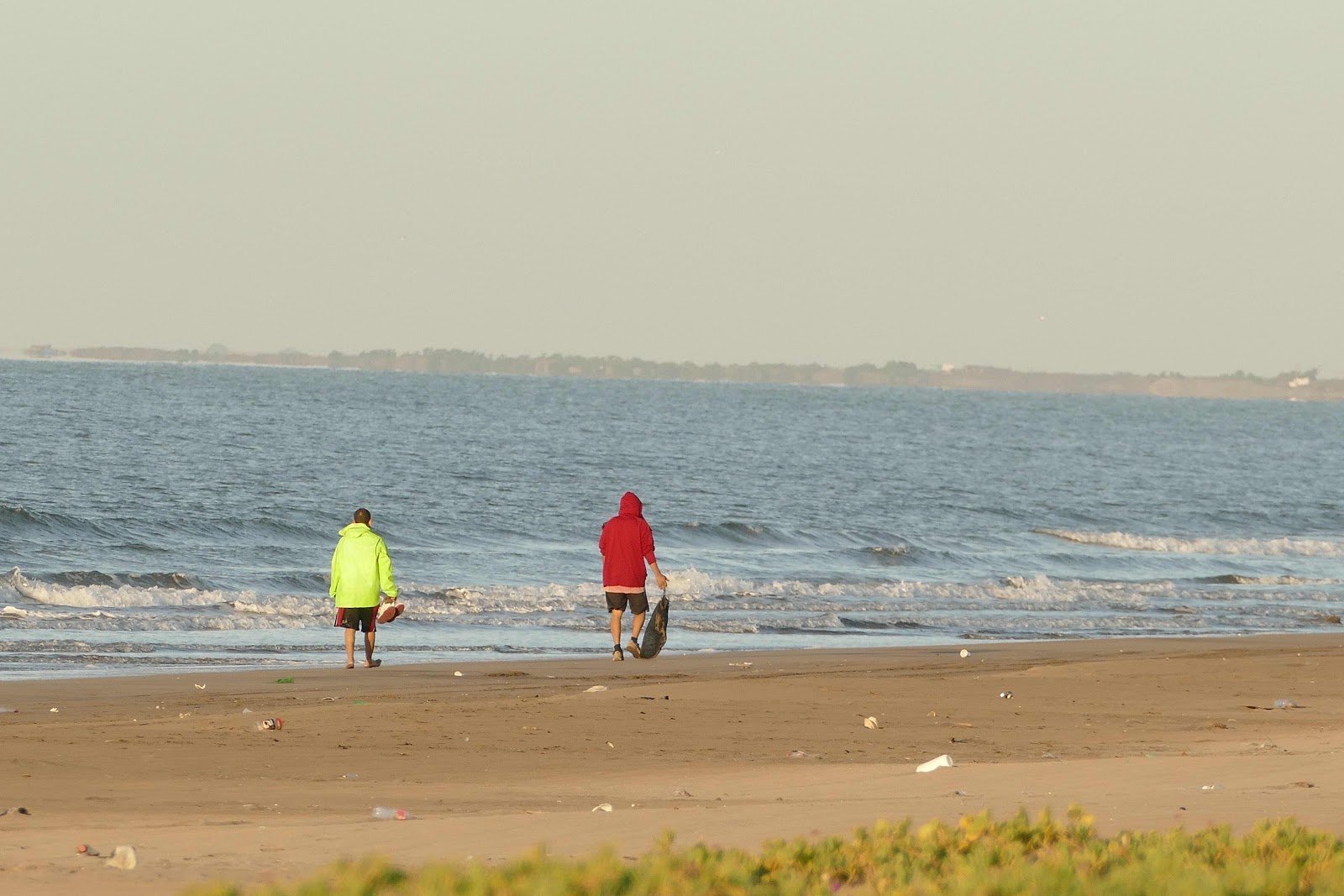 The brown leathery face broke into an apologetic smile. “My friend is too shy to ask but he was wondering if you could charge his phone?” Rogelio was carrying a cell phone with plug and cord so it was easy to help out. His gaze ran over the home on wheels as he explained they used the flashlight on the phone to work their nets after dark. 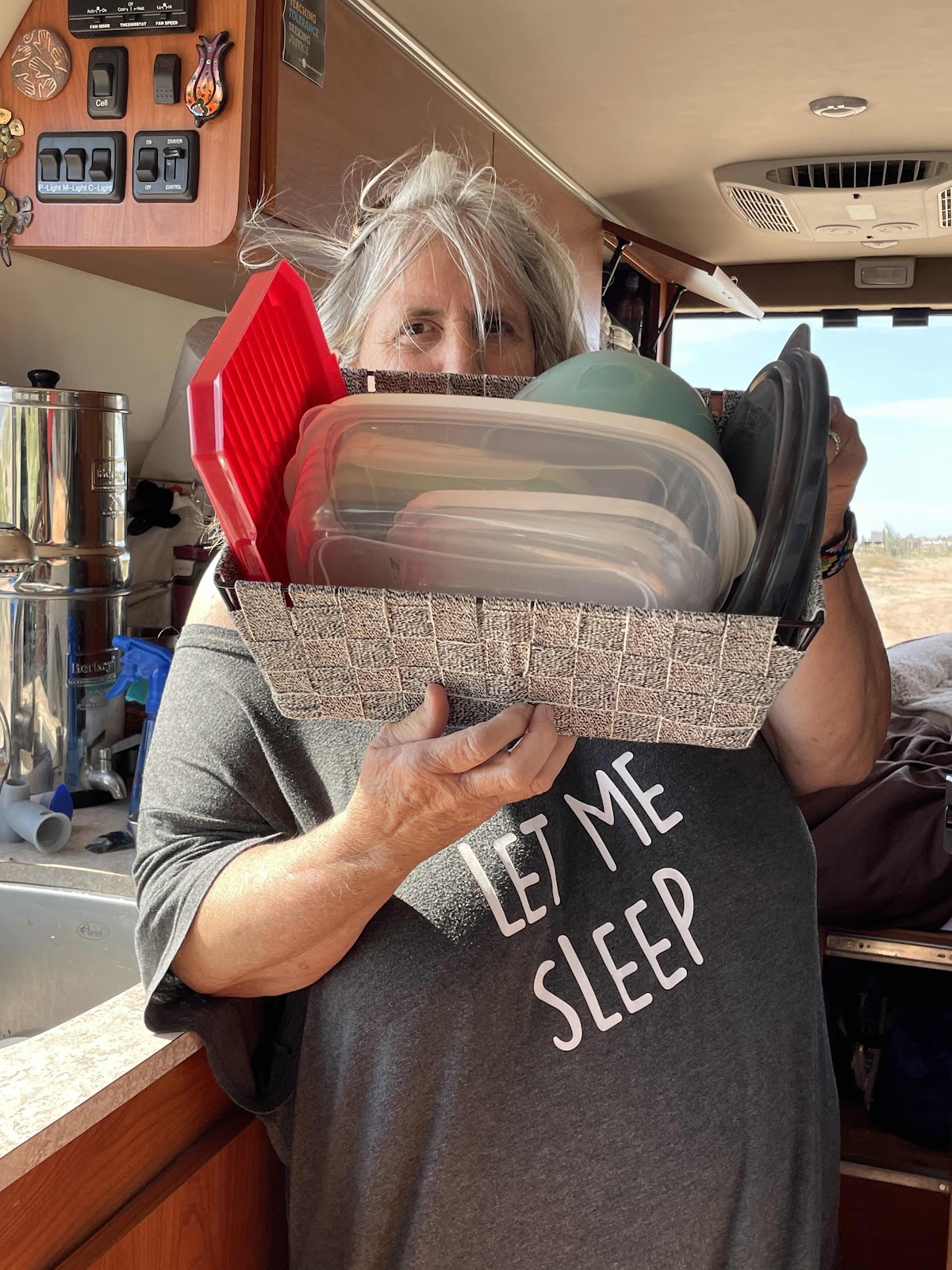 Layne told me with some pride she has used every single container she stores in the microwave. Not that big of a deal, right? Imagine what Rogelio’s wife uses in her kitchen…He came by later to check on the phone in case we were planning on leaving. No worries I said we plan to be here till Sunday, I said. He looked relieved. But tomorrow for sure he said worried we might drive off with his friend’s phone. I reassured him. He showed me a little seahorse they had caught accidentally. I took a  hast fuzzy photo of the creature: 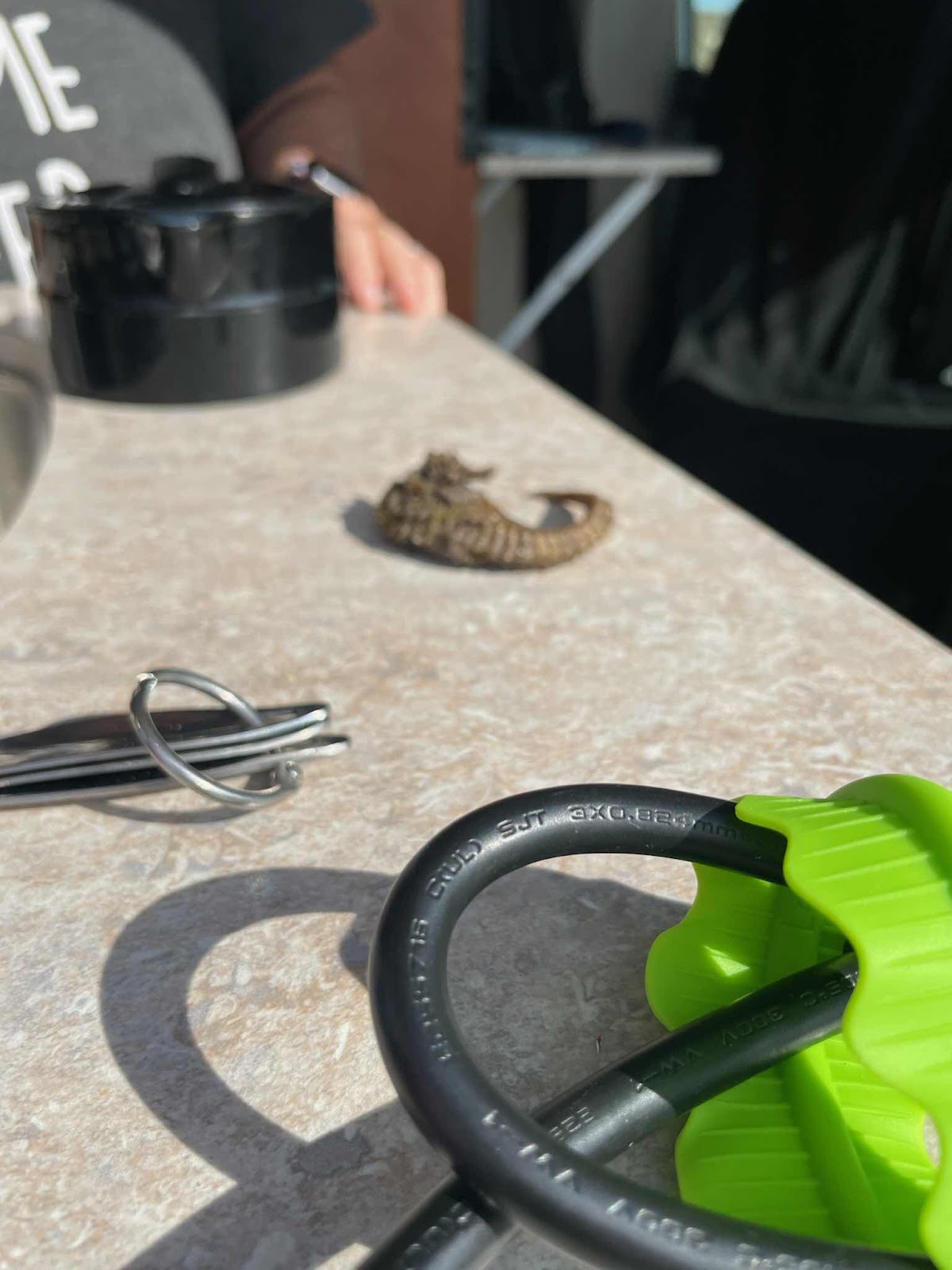 It was beautiful but I urged him to put it back in the water. He said they aren’t legal to keep anyway and he walked back to his nets with the little creature that I hoped would live. We carried on with our day exercising napping and walking the chief security officer. 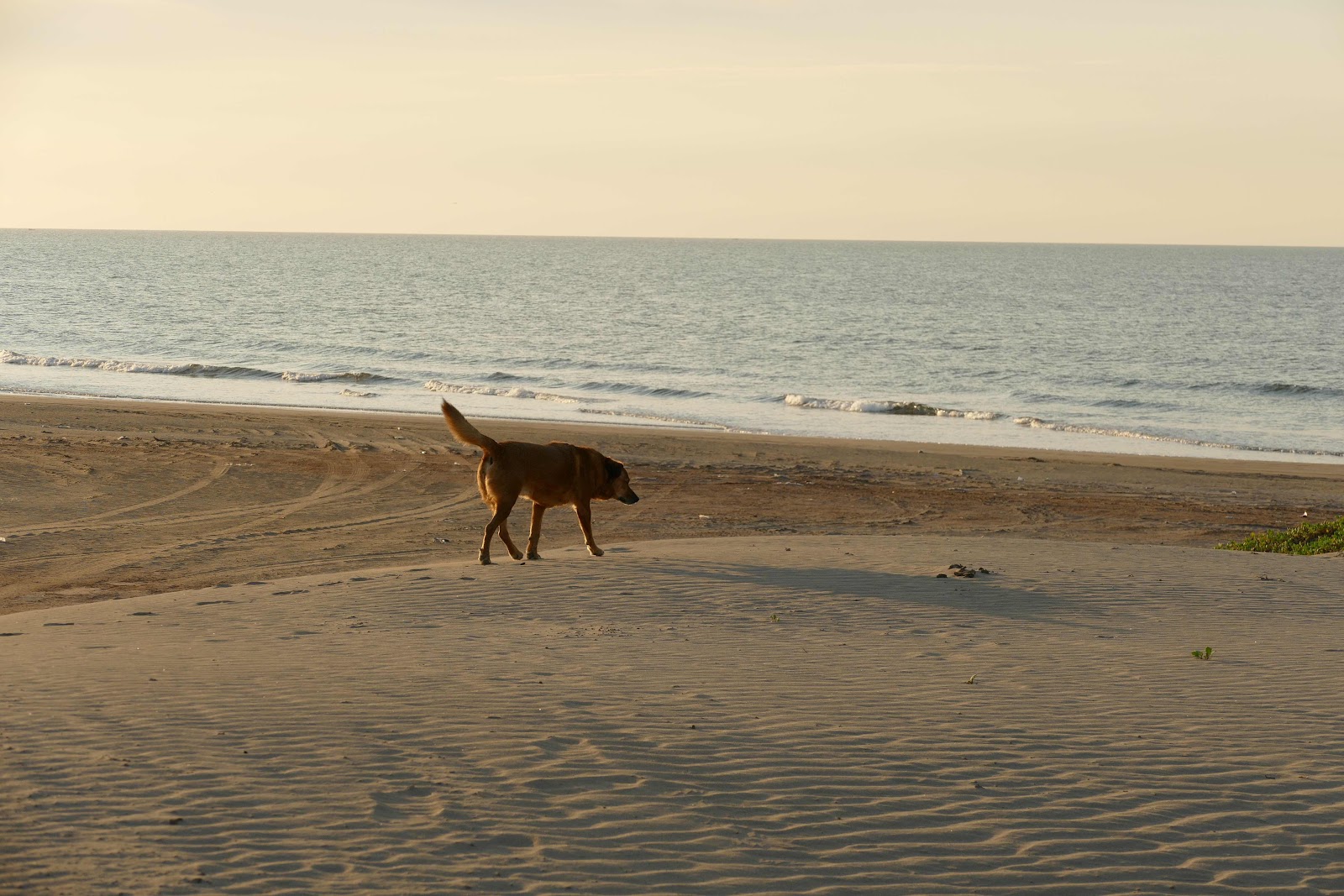 Clouds blew over and the breeze kicked in with enough strength to keep the mosquitoes at home and out of our lives. Lovely. The telephone owner found his courage and showed up with his buddy Rogelio: he’s the one in the Mercedes logo baseball cap. 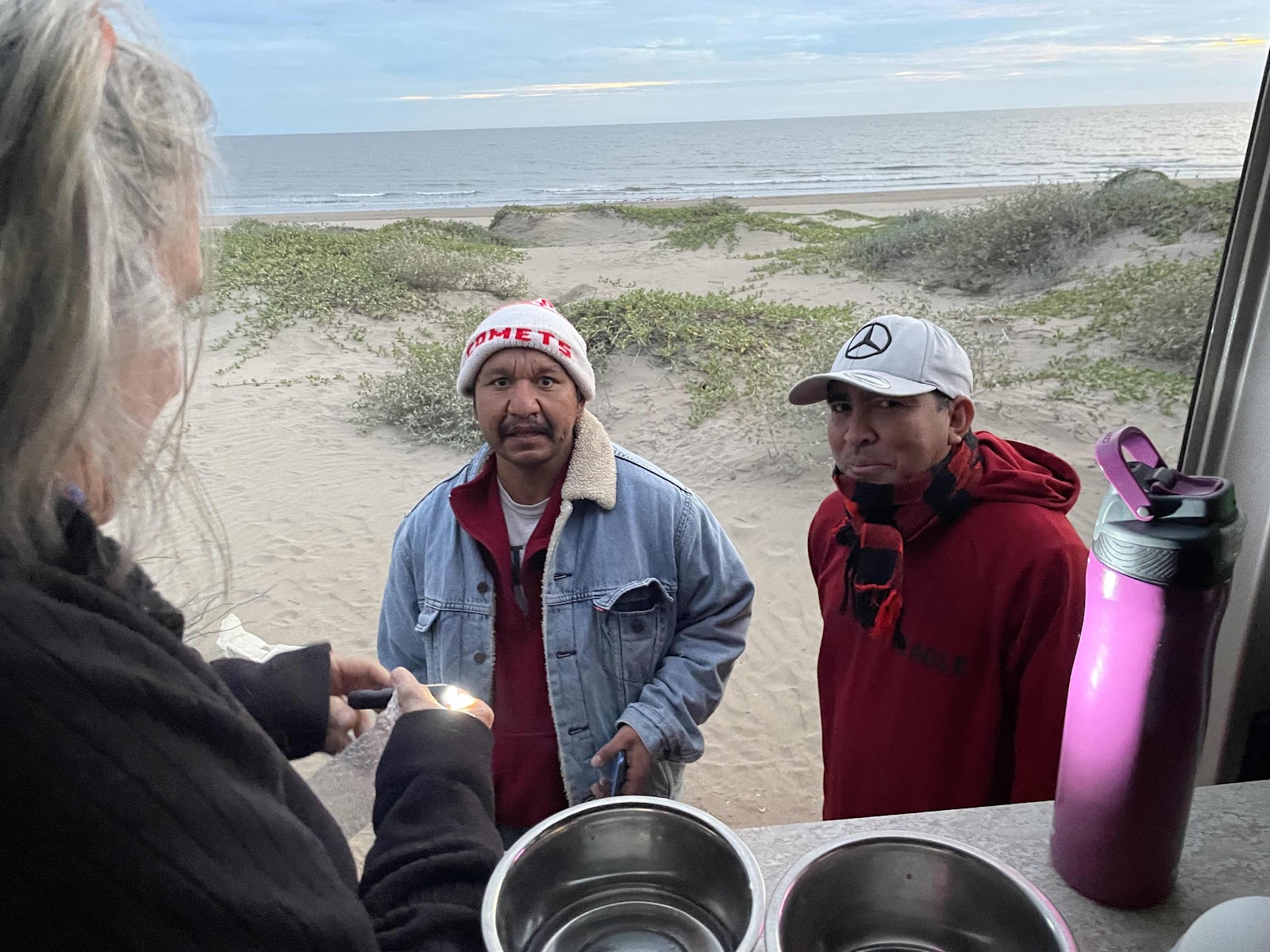 The phone owner, in the woolen watch cap, introduced himself as Cristobal. I said if he needed another charge to bring it by by Saturday at the latest. Why are you leaving Sunday, they asked. I pointed to the Admiral and she made a self deprecating noise. Maybe not Sunday she said. If it’s sunny…we gave Rogelio one of the flashlights we carry as gifts. They are small and powerful and we use ours all the time. He seemed genuinely grateful. 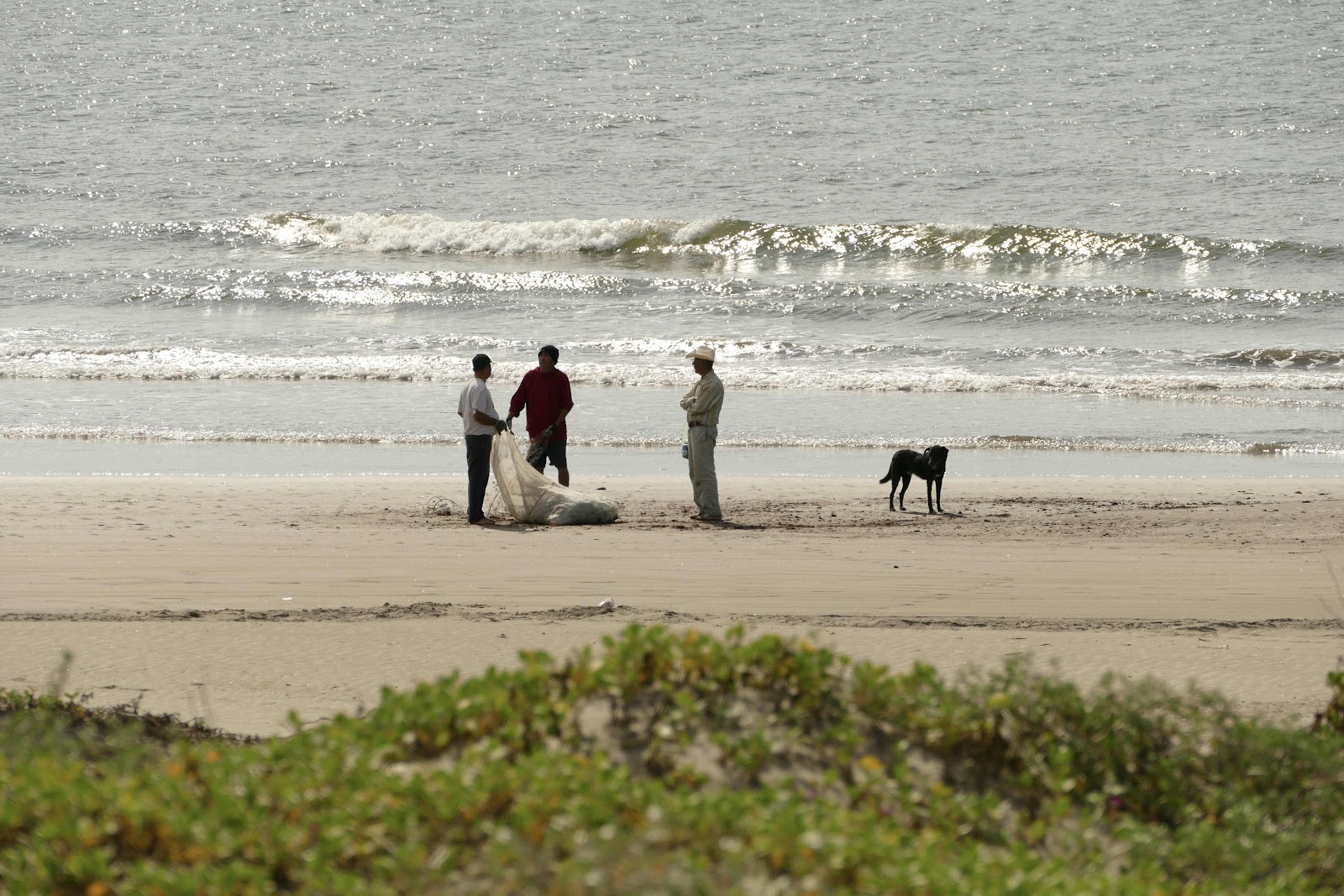 Part of the pleasure of life is hanging with your buds, the work is physical but the sort of stress and deadlines of modern office life isn’t part of it. Ambition? Expectations? It’s in the children usually. To live like us without children and on our own without a family nearby is weird beyond understanding. 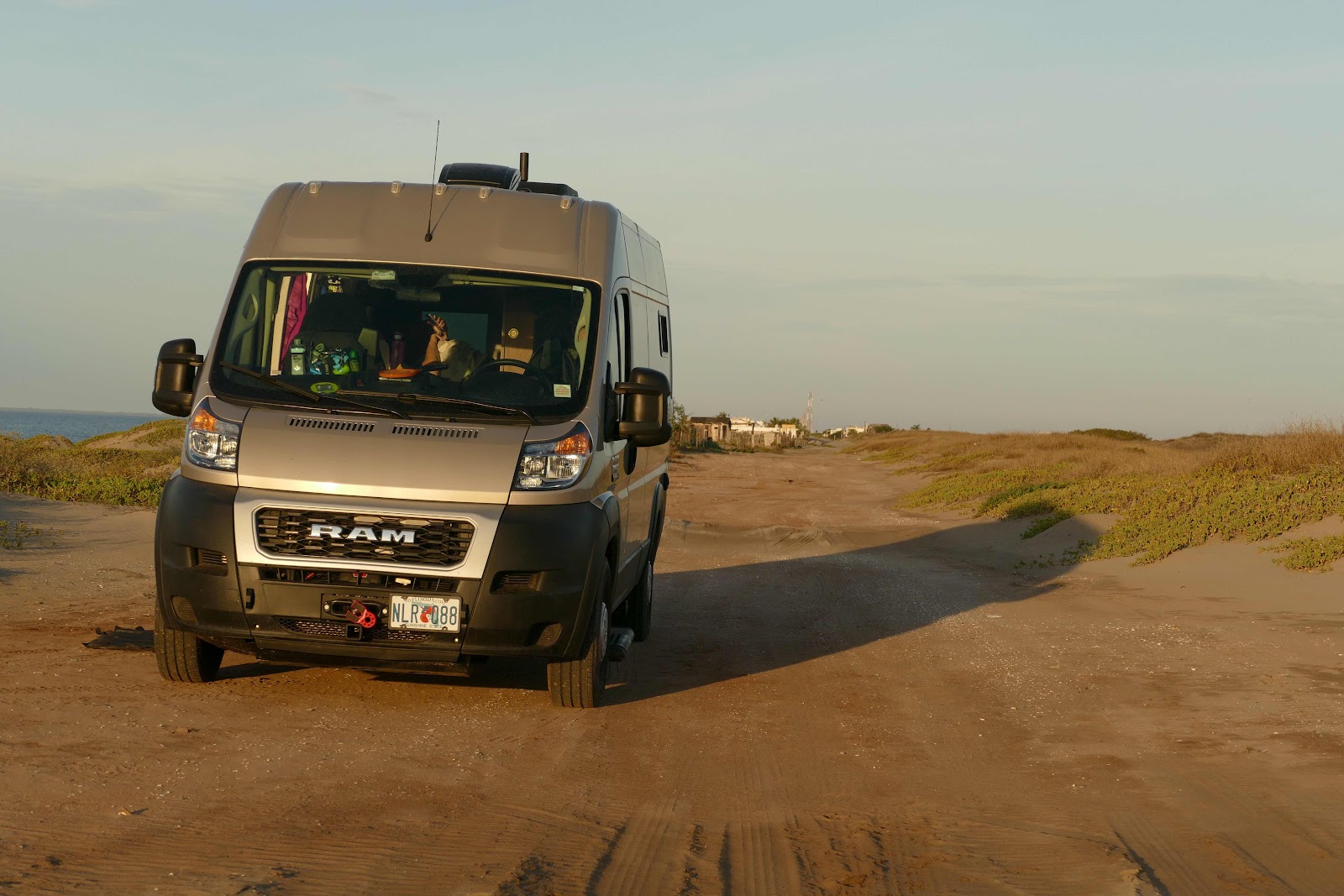 Mexico is a land of contrasts and poverty and generosity and kindness. I like the freedom we get traveling here. Don’t be an ass, be considerate and leave your pride at home. Just like you should when living at home. The freedom comes from living in a society where you are largely left to your own devices. The downside is you’ll have a hard time getting redress for injustice but the good part is your choices are yours to make. 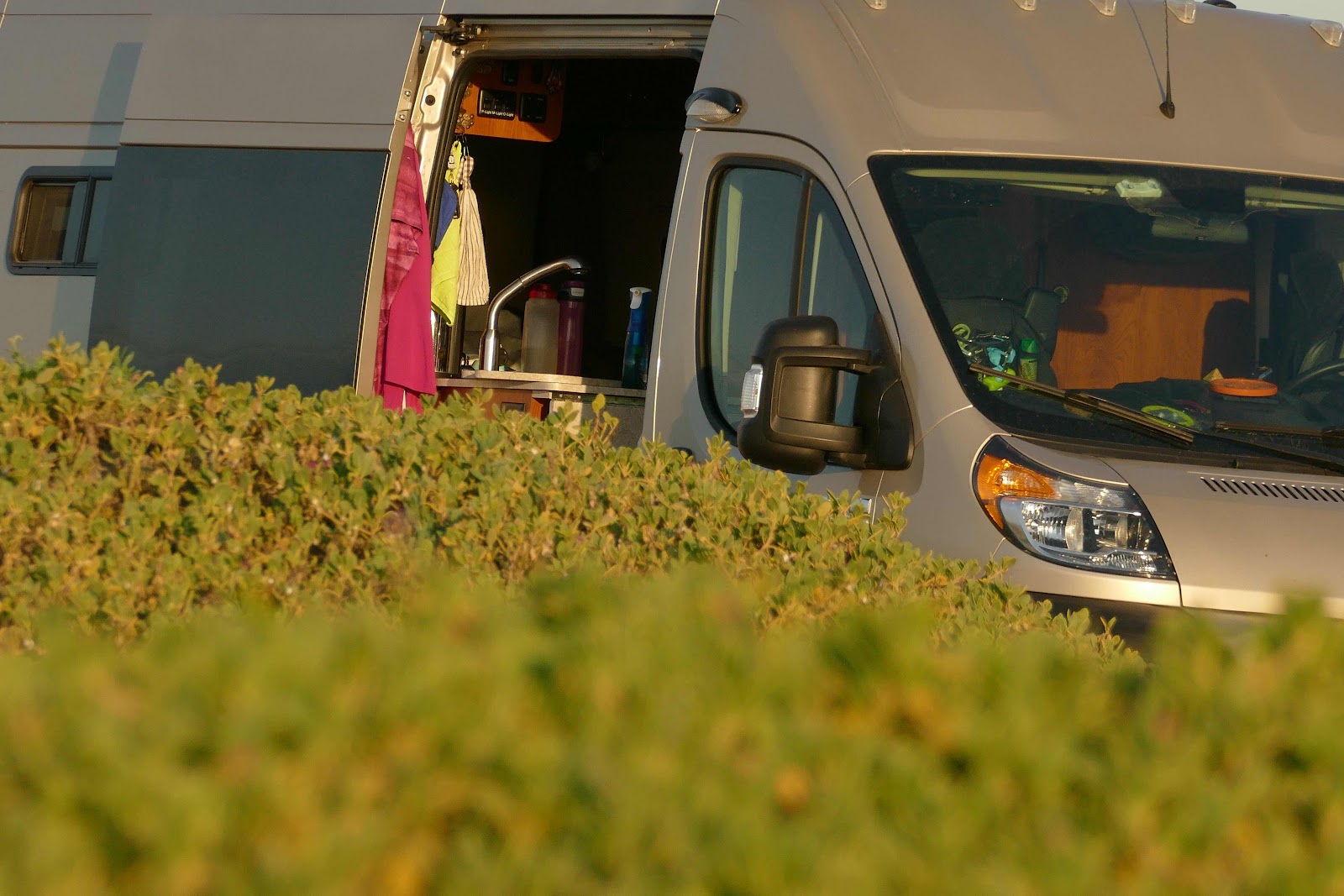 I like the quiet of a spot like this. It suits me. I am not driven to be busy, to run peoples lives or spy on my neighbor’s bad behavior. I don’t get bored easily.
Posted by Conchscooter at 2:00 AM 4 comments: