The city has been pointing out fairly publicly that saving a parking space with a  trash can or cone is illegal. It's also illegal to park on the street and not move your car for 72 hours. This is the time of year everyone is turning everyone in for parking infractions. The other day I took 25 of them in a 12 hour shift and I don't know how many my colleague dispatched. When I'm out walking I known when garbage collection is coming or recently occurred: 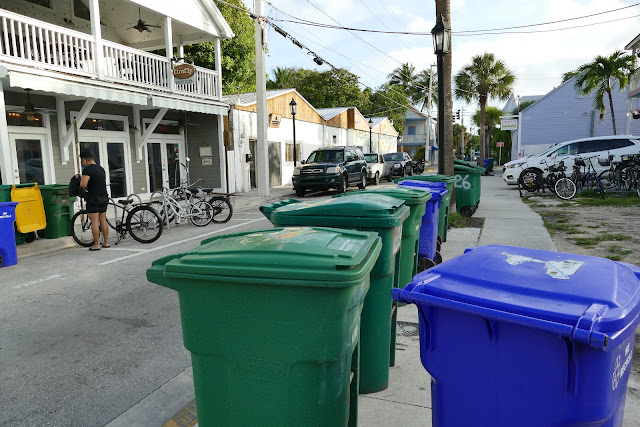 The sidewalks are narrow and the trash needs are huge so some discombobulation is to be expected as modern trash cans are positively cavernous. Rusty sidesteps them nimbly but I am not quite so lucky as I lumber after him! 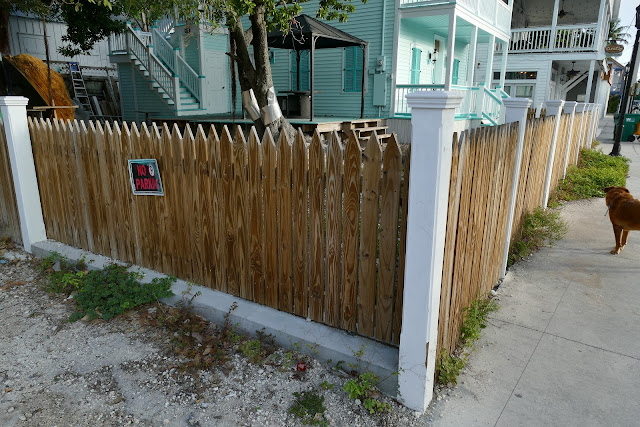 Check out the neat new fencing in the picture above. The house has got a lick of paint and order has been brought to a corner that used to be a mixture of outdoor art studio and actual shade tree mechanic's  shop. You can see in the picture below the artwork on the old rickety fence covered with construction netting. 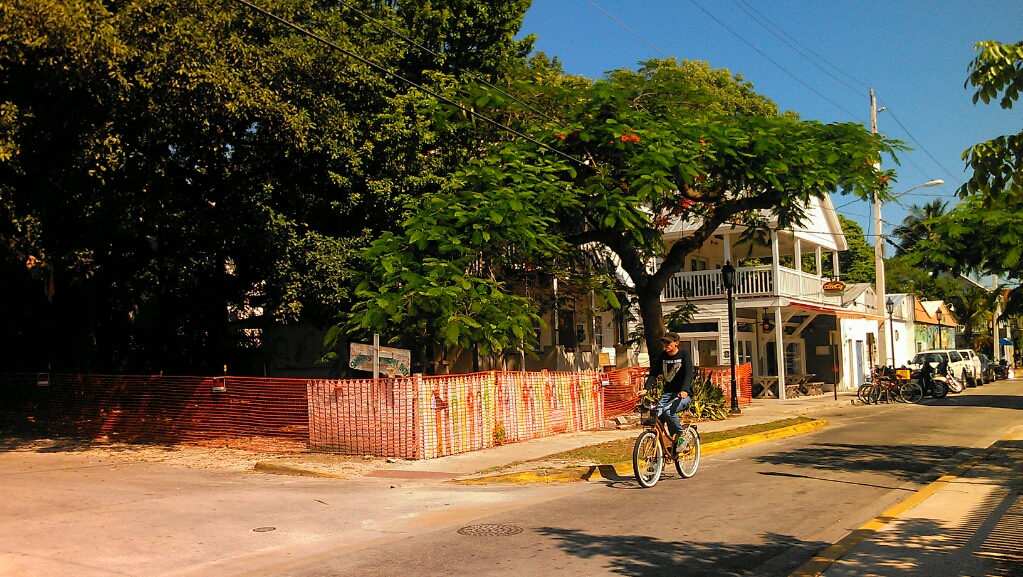 Change is good they tell us but Mr Chapman lost his home next door during the foreclosure scandals and instead of riding his outrageously decorated tricycle up and down Duval playing loud music from the speakers on the back. The neighborhood has gone to gentrification and Chapman apparently had to move to northern Florida from a formerly secure old age in his Key West. 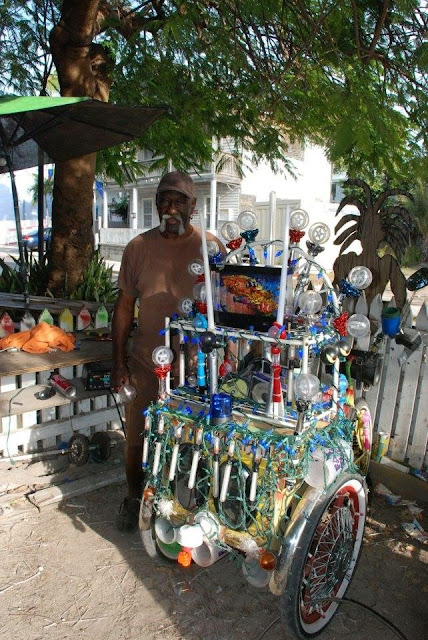 Nowadays it is enough to celebrate the past in two dimensions on a  mural where a game of dominoes will disturb no one and will serve as a sign of how cool the place is that they moved too, and how pleasant it was for those that were lucky enough to live here before it all disappeared and became cultural history. 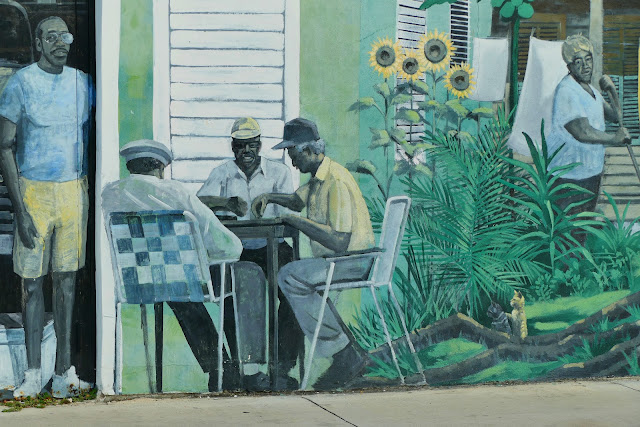 "The Best Kept Secret Of The Locals!" the neon green sign screams. Irony, where is thy sting? 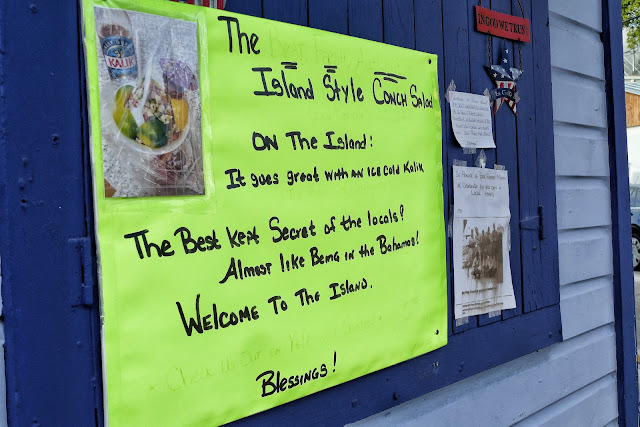 Every visitor thinks that the locals are holding back, that there is some secret parlor that serves food and drink strangers can never know about; some sort of elixir of youth and  a plate of ambrosia of the gods... for locals only! 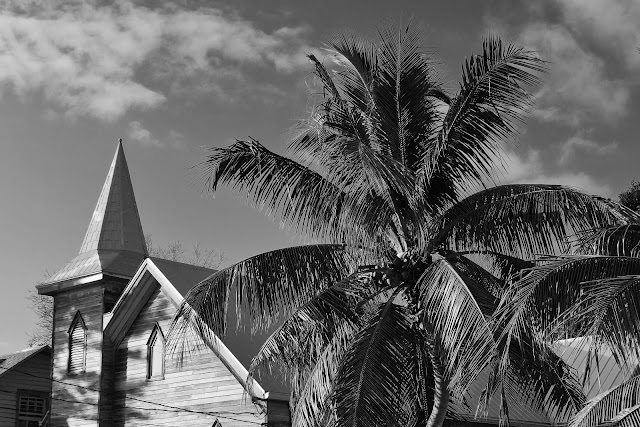 I think the real secret some few locals know and others don't care to bother with, is the state of mind where you walk and look and see and think. 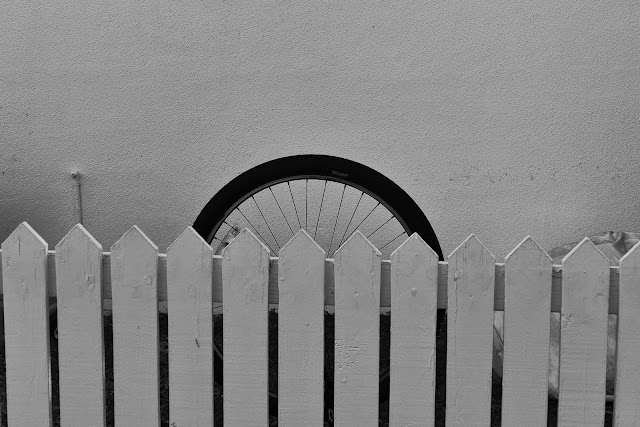 The colorful Conch Cottage illuminated by the afternoon winter sun is there and stands as the obvious symbol of the End of the Road culture of the island. 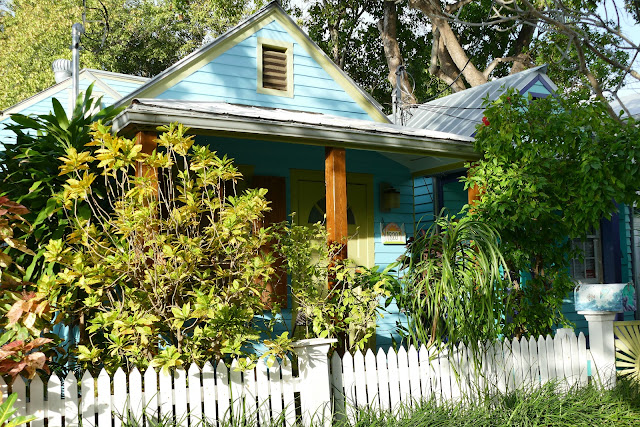 But sometimes we have to be dragged down to earth and reminded to see the worst with a sense of humor. 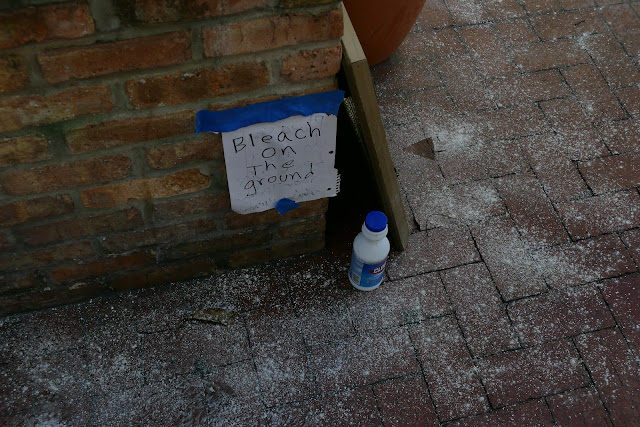 This is the reality of close quarters living in a small American town. You pay a million bucks for a tiny shack but that doesn't mean you get to park nearby or smell only fresh sea air! 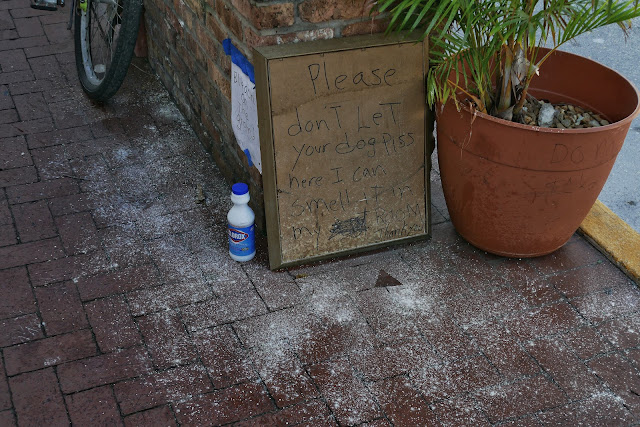 But the beauty is also there if you can take time out from sniffing the roses as it were. 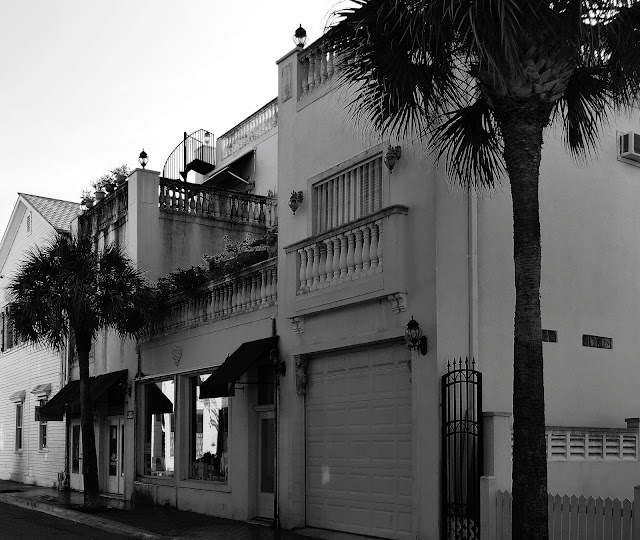 Funny the stuff you see when you are wandering around town with a dog (who doesn't piss at random happily) and a camera.
Posted by Conchscooter at 12:00 AM 3 comments: