If you look really closely you'll see rain drops on the windshield. However even not looking too closely you'll notice the car was on a six lane highway thus it was not in the Keys. One should be grateful it seems to be raining cats and dogs every afternoon on the mainland because that is where our water supply comes from, but still I am ready to see lots of lush greenery even in the Keys. 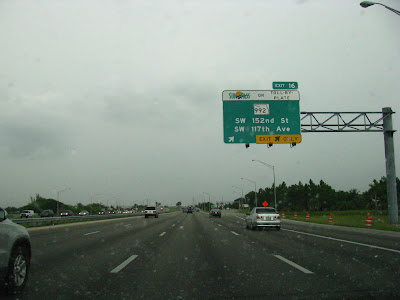 Every morning I see big black clouds overhead promising me a day off watering the plants. Fat chance. Every day they blow away and when I wake up at lunchtime its a blindingly bright sunny day outside. Poor me. 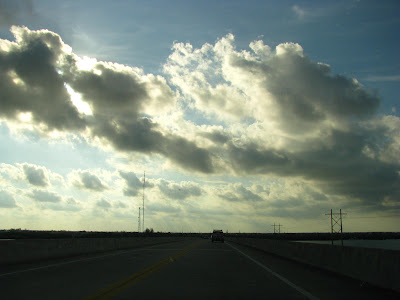 I don't mind at all because the breezes are still blowing and though it may be 91 degrees outside its an absolute delight standing around for ten minutes, hose in hand watching my mango grow. 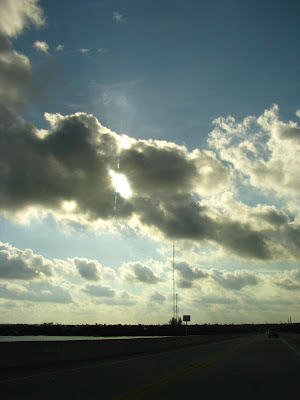 But still, it seems like it would be the socially responsible thing to wish for rain. They say it rain heavily in Key West a couple of days ago, but that's just a rumor. Come on down, the weather is lovely, if you're not a plant.
Posted by Conchscooter at 9:01 PM No comments: Links to this post

I have been asked if I sometimes miss living in the City of Key West which is usually the first place people want to live when they discover the keys. There is the romance of the narrow lanes, being close to the heart of the action and so forth. 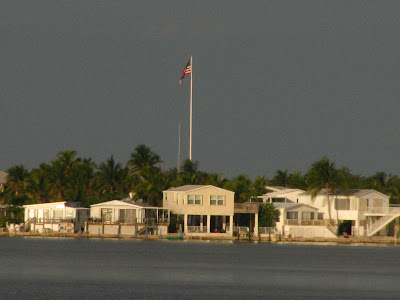 I can safely say that the only time I wished I lived in the city is when it's late at night and I have to haul my ass home from an event or a dinner or a movie and I'd rather my bed were three blocks away as opposed to 27 miles. 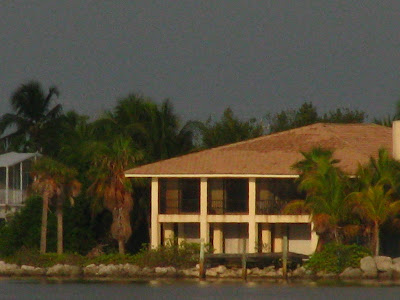 There is the fact that I do enjoy the commute especially as I normally do it by motorcycle or if I am lucky I get to ride my wife's Vespa 150 so commuting is generally fun for me. My wife enjoys commuting with her top down so the convertible does for her what riding does for me. 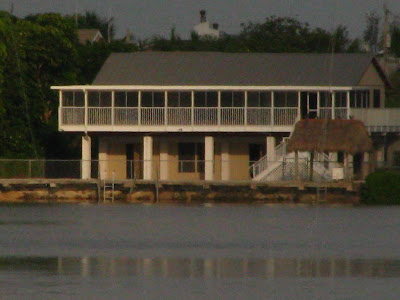 Beyond the logistics I find that living in the suburbs, up a canal a long way from the tourist frenzy of Old Town Key West, is the best place for me. Even though our modest 800 square foot stilt house has no open water views like these houses I photographed on Cudjoe Key, we have a dock on a canal and views to the west over the water and mangroves that make up most of the western edge of Ramrod Key. 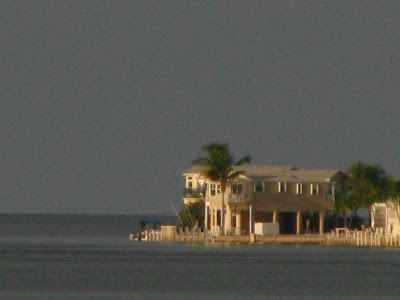 Certainly open water views are beautiful against which one has to balance one's exposure to hurricane generated waves... 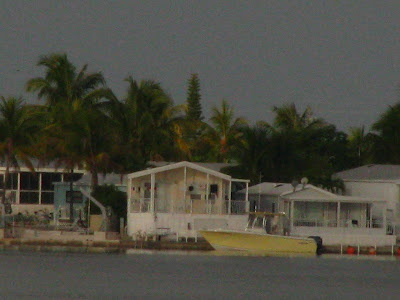 But the life of a canal dweller in general seems to me to be more in line with what counts most for me about life in the Keys. I like living on the water, I enjoy the utter peace and quiet of my little island, especially in summer when the snowbirds are gone and I can sit out on my deck and see no one and hear nothing all afternoon long. 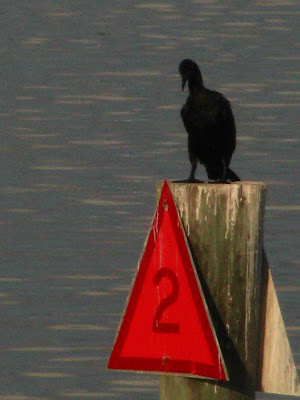 There are of course other ways to enjoy waterfront living, like the cormorant drying out on a channel marker, or the sailor living on a sailboat. 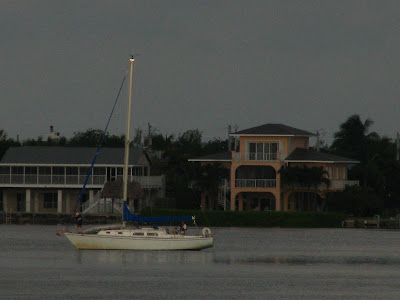 The most extravagant end up on their own islands, well and truly cut off from the rest of us. 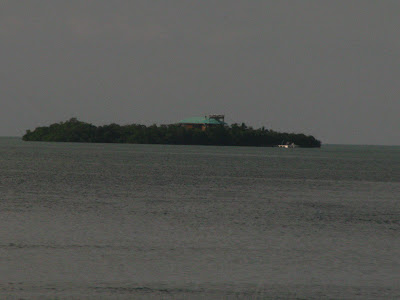 Actually that seems a bit excessive to me, needing too much logistical preparation and frankly too much effort to shuttle everything out to your island, from the plumber when needed to the spare bottle of milk or six pack of beer. To each his own I suppose, and for many of us it has to be Old Town!
Posted by Conchscooter at 5:01 PM No comments: Links to this post

The location of the incident mentioned in this morning's essay is actually quite scenic and pretty, which was why I chose to take a look and bring my camera along. 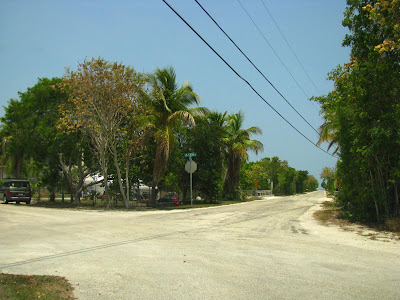 I came across a magnificent four way stop just yards from card Sound Road and to my delight there was a little bridge and a canal dug out of the living rock. Plus a bird (an ibis perchance?) was keeping an eye on things from an exceedingly awkward perch all the while. 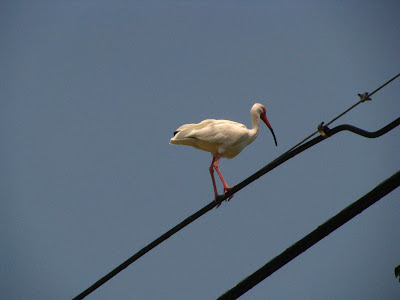 There was one rather bizarre looking but very functional apartment building overlooking the canal to the north: 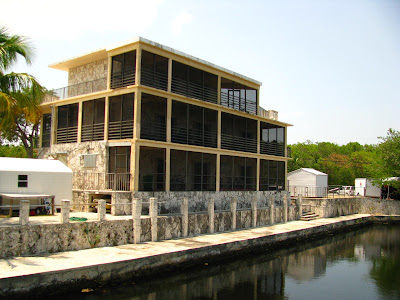 To the south the canal went sort of nowhere. 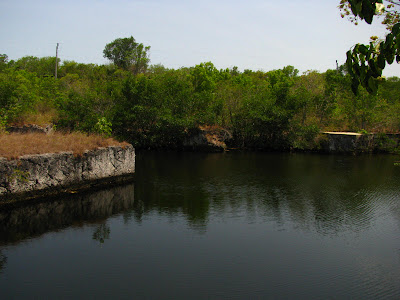 I couldn't imagine the amount of work that went into digging this massive piece of engineering, and then ending up with no development to justify it. I stumped through the dry grass and spindly trees, wishing my dog were there to enjoy the fun, and reached the edge of this imposing waterway. 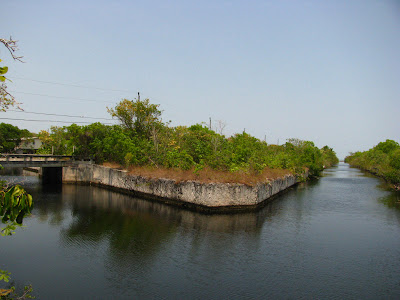 The bridge to the left is Valois Boulevard while the waterway to the right reaches the tidal waters of the Straits of Florida. Of Houses along its banks there were none to be seen at this end. It seemed deserted. 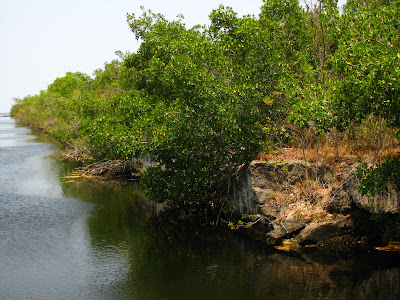 The corner was built up in an extraordinarily elaborate way. It looked almost like the haul out space of a marina or boatyard. 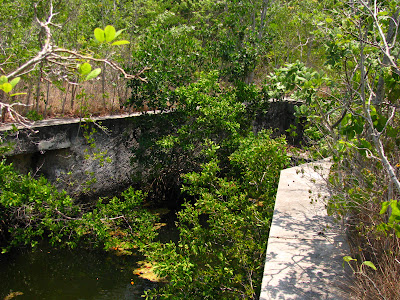 So it was I got back in the car and drove to the end of Valois Boulevard where I walked along a little trail to the end of the canal which it turned out was completely closed off from the ocean by a cement barrier. 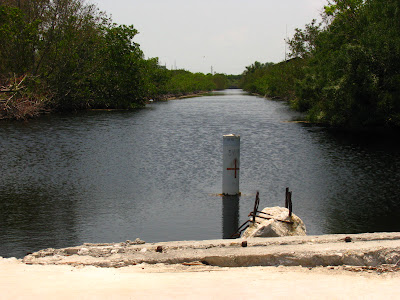 "No Fishing In The Canal" was the message stenciled everywhere. Clearly there's no boating and swimming would be an exercise in drowning as there was no way up or down the tall stone walls. 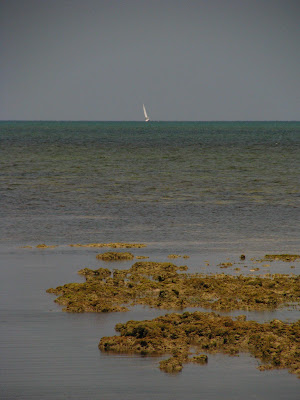 The fresh breeze and open waters beyond the cement barrier looked doubly entrancing, liberated from the confines of the mysterious and blocked off canal.
Posted by Conchscooter at 11:01 AM No comments: Links to this post

I was watching the young man maneuver his boat into position for the night and I was struck by the timelessness of the pose. They were doing stuff like this in Biblical times. 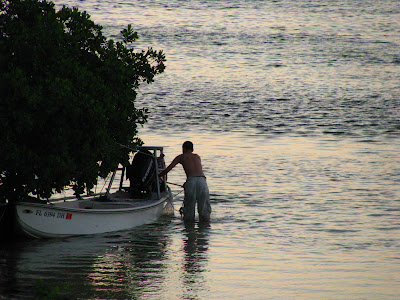 It was flat enough it could have been the Sea of Galilee I suppose. 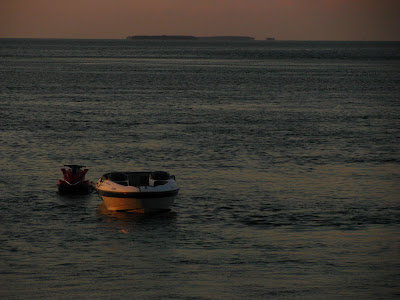 When you think about it we have all kinds of agencies and organizations working to keep humans in the Keys. I know government is the enemy in the current political climate but I'd rather see this sign over our empty spaces than corporate ownership of our public lands. 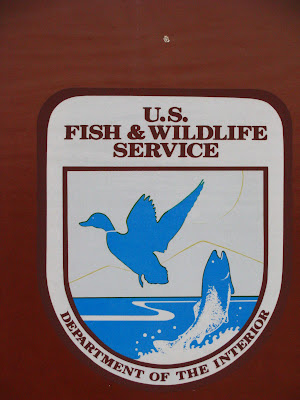 It takes huge amounts of energy to keep 75,000 people living in these islands, and other than recreation I wonder what our purpose is. Nothing is manufactured here, except for t shirt slogans and some skin creams and nothing much is exported except for seafood. 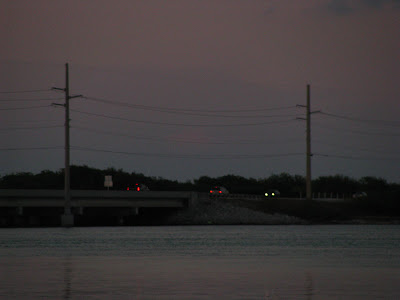 Yet here we are in the midst of the magnificence of nature, out on a limb providing space for the harried masses to come and recreate. 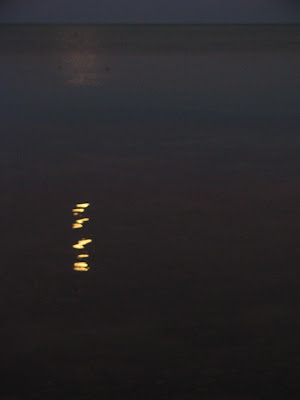 I spent twenty four hours on the mainland recently and was struck by how many people live and move in the suburbs of Miami. Sometimes I watch the cars rumbling over the bridges over the water near my home and think to myself that this is a huge convoy of cars rolling by on the cement props of the Overseas Highway. 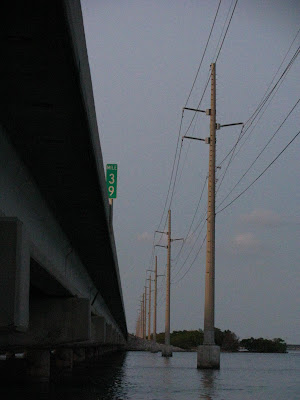 And, pausing in traffic on some six lane autoroute through the city I realize what a lot of traffic really amounts to. 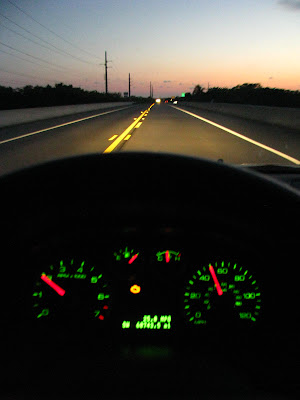 I read about the Greek government selling it's public spaces and considering the sale of some islands and I wonder how bad things get here before the Koch brothers put in a bid for Grassy Key, perhaps. A billionaire's playground indeed.
Posted by Conchscooter at 12:01 AM No comments: Links to this post