My sister-in-law motioned to the waiter after we had been studying the menu for a few minutes and while the rest of us continued to giggle helplessly she pointed out to young Josh that among the five of us we spoke five languages and between the lot of us we had traveled to six continents but putting all our heads together there was much in the menu we could not decipher.  Such an opening bodes not the promise of  a very good meal, but Josh handled it like the pro that he is and patiently explained all we needed to know. And there was a lot. 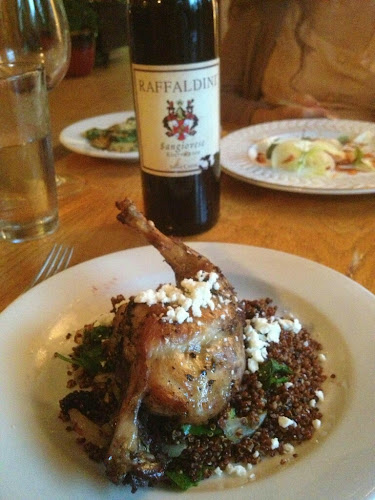 That the restaurant Knife and Fork is an unassuming store front in the unassuming North Carolina hill town called Spruce Pine made our confusion all the more hilarious to us, the table of urbane world travelers. At Knife and Fork the food took all that noise away and replaced it with the muted sounds of people enjoying their food. . My rabbit, seen above was excellent, with black raspberries in the quinoa and feta  sprinkled over the whole thing and  best of all none of the ingredients were unknown to me... 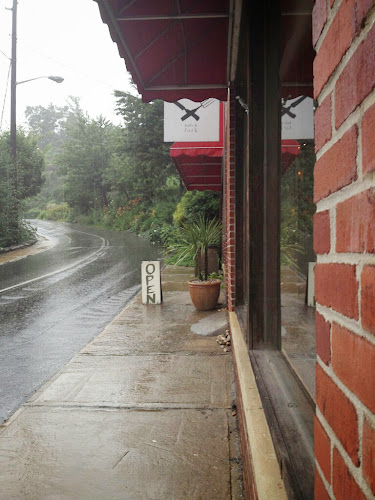 My brother-in-law describes himself tongue in cheek as a wine snob and therefore we brought a couple of bottles of his own excellent wines to be corked as it were for en bucks apiece by our hard working waiter, the Josh aforementioned, seen here pulling the stopper from a bottle of North Carolina Raffaldini Sangiovese. Thus it was we never even got to see the restaurant's wine list. 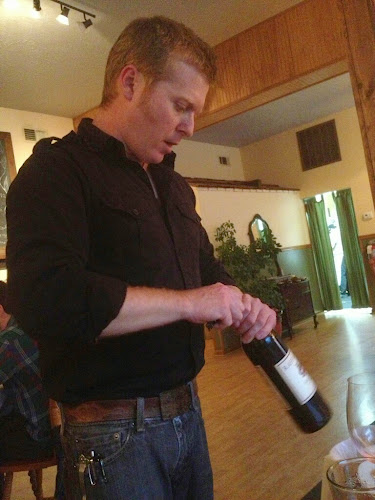 My indefatigable hostess, sister-in-law Geeta had organized a Fourth of July festivity for us to attend at the nearby Penland Craft School but rain stopped play. Stopped it dead as there were flash flood warnings and rivers were rising all across the mountains of western North Carolina. The pouring rain outside just made it all the more snug inside where we pouring brother-in-law Bob's wines with gay abandon. There he is next to his wife eyeing my wine glass. Good man.﻿ 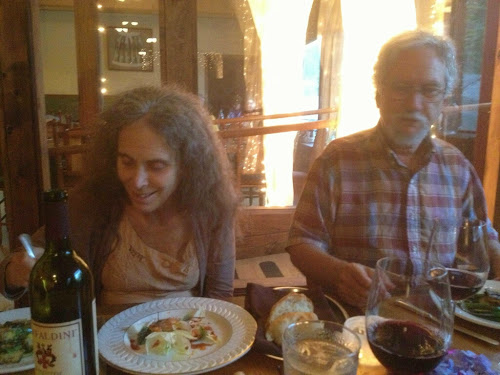 Once I had figured out what "lardo" was I ordered kettle corn with melted lard on it. Sounded intriguing and here it was, an appetizer like none  other I had eaten in my world travels. Popcorn for dinner...no less! In the foreground we see my wife's choice of fava beans and chicken neck. 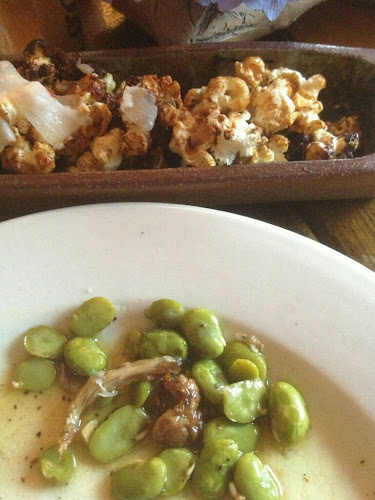 Knife and Fork has taken on the relatively new and very fashionable mantra of the locavore and they do a very nice job of letting the flavors in the foods speak for themselves. I think those beans were the most flavorful favas I have eaten in decades. Ellie, a former resident of Ecuador was delighted with her simple  yet elegant salad. And her glass of water...vegetarianism at its most ascetic. 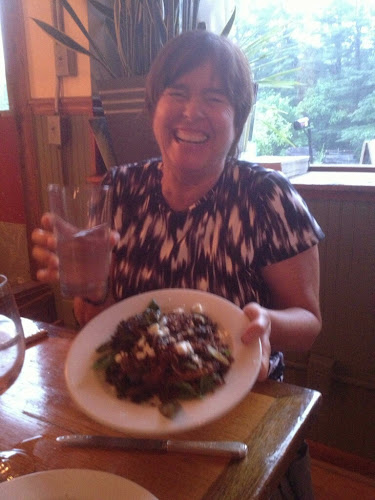 Every dish was a delight to look at and even better to eat. I had never heard of "allen table" cucumbers as seen on the left but they were delicious. 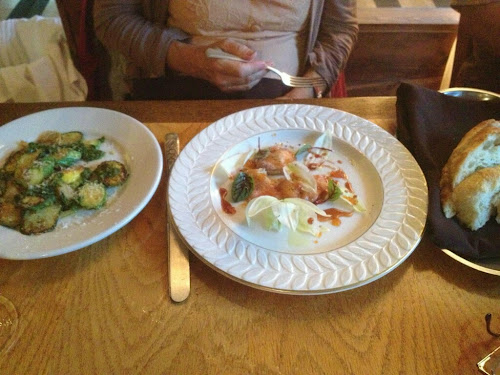 One of my wife's goals on this trip was to taste as much trout as she  could and she got a fair slab on her plate at Knife and Fork. 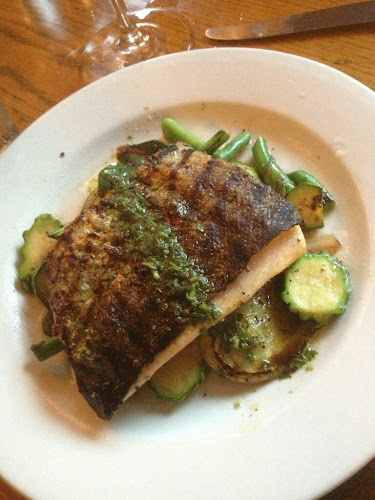 The prices at the restaurant are quite interesting too as they are not deigned to exclude anyone from a chance to taste first class cuisine and Spruce Pine is a small mountain town developing a reputation as an artist's haven in a working class town. The appetizers are less than ten bucks but the main dishes aren't much more, peaking at  $22 for a steak main course. Desserts were imaginative and excellent and they topped out at 6 bucks. All in all this is an excellent value. ﻿ 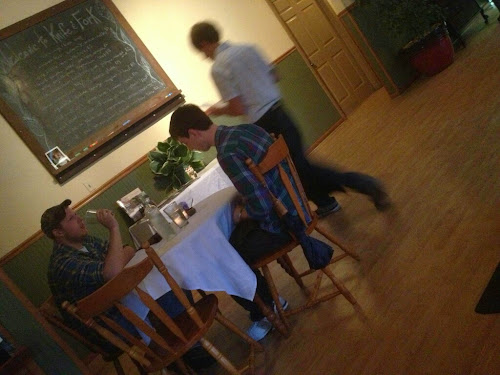 I wanted to try a cross section of desserts and overrode my dinner companions by ordering three dishes. One was a bread pudding with vanilla ice cream which I would rate as okay and no more. I like my bread pudding to be thick and moist and crumbly but this was two flat slabs of pudding with no texture. The huckleberry dish was the stand out, shown in the middle below, comprising a biscuit (!) slightly salty and crumbly with tart berries and delicious sweet cream. It won the prize as the best of the three. Of course we included a dark chocolate mousse for those heathen who argue that dessert must include at least some chocolate... We passed them round and each dug in with a spoon before passing the dish along to their neighbor. 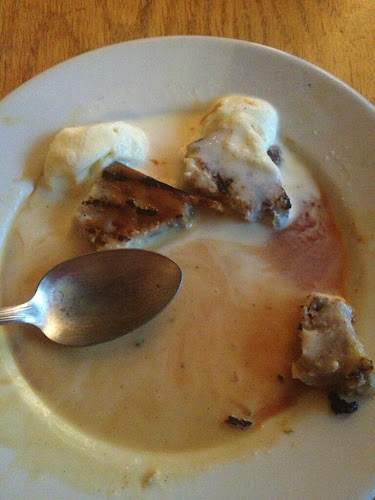 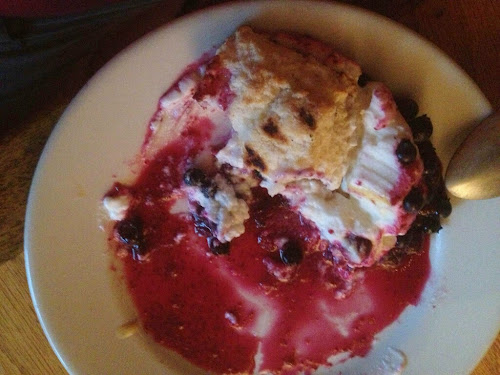 Owing to our aborted Fourth of July plans we had reserved an early seating and were unable to move it back and that ended up being okay too as we got home before dark, lit the fire and drank brandy till sleep overcame us one by one. It was an excellent Fourth despite the washed out weather. 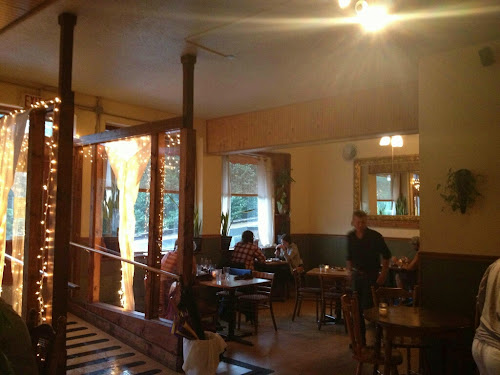 I was doing fine by the end of dinner.﻿ 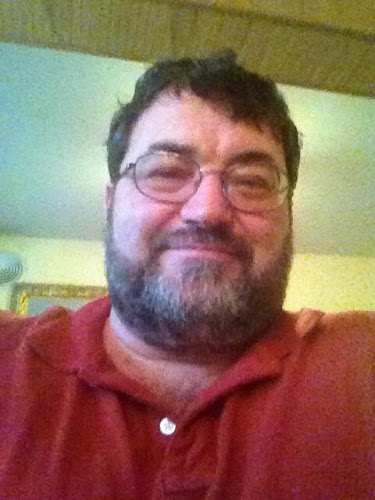 Nate the owner came out to chat with the locals at our table, Bob and Geeta. He is a Los Angeles transplant who married a North Carolina native who started pining for her homeland. One can  hardly blame her when one sees these mountains under sunshine, as one should. Anyway he came to live in his small town and decided to open a fabulous restaurant which he did. No one much noticed until he entered a regional cooking contest and beat everyone hands down, including the big name from the Biltmore Estate and suddenly he put himself on the map. Now everyone in the area is trekking to Spruce Pine for a meal. Plus Nate is expanding with prospects for a bar with food and a patio dining area. I've eaten there twice and I know I will go back when we make the family visit trek back to Celo. 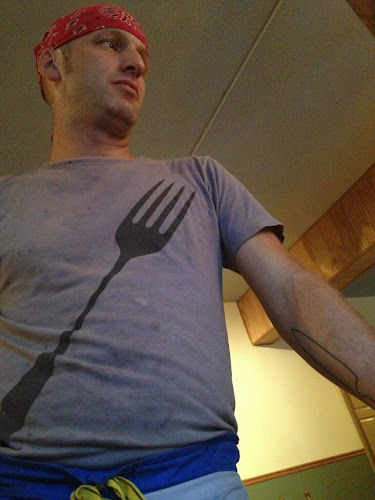 That locavore thing is on display in the dining room with photos and notes from the area farmers who supply real local food to the restaurant. These are the people who provide the ingredients for Nate to work his magic. Happy families growing happy food,. 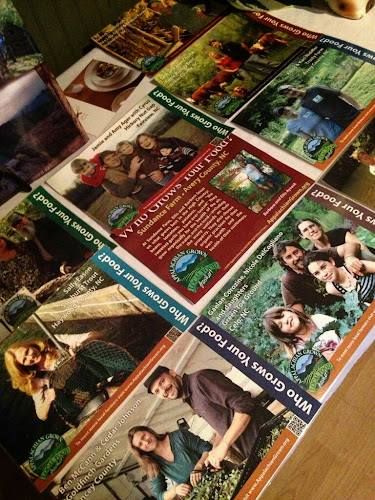 The bill came to $225 including $20  corkage and considering the fact that we held back not one jot it was an astonishing good value.  ﻿ 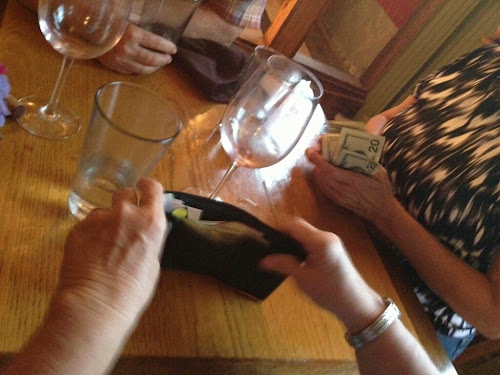 I have to confess that after coming to terms with preposterous Key West prices it was enormous great fun to have an exceptional meal, served by a cheerful capable waiter and to be able to call the whole experience a good value. 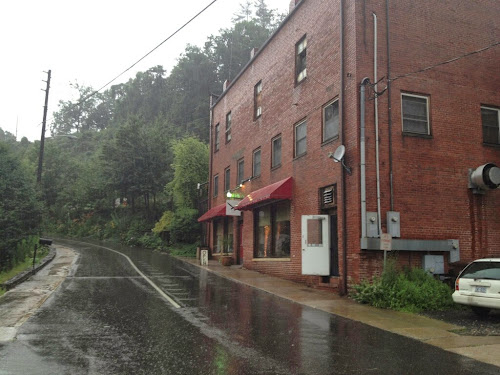 The food items that had confused us are all recorded on the restaurant's online menu. The cheeses, once we discovered they were cheeses got confusing invierno, sottocenere,taleggio. Not to mention the assorted and wild greens that accompanied the dishes. We were feverishly  consulting my wife's iPhone on the subject of mizuna, lamb's quarters, frisee and after we sorted that lot out we had the mysterious gribiche to unravel. If that lot is child's play to you, you're welcome. In any event if you want a first class meal and can find Spruce Pine on the highway between Asheville and Boone this is the place to stop. 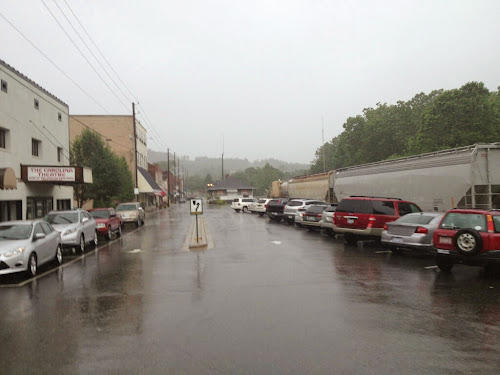 Spruce Pine has  had quite  a history since its founding in the early 20th century and the backbone, the railroad is still there in town, alongside lower main street known as Locust Avenue. There is also an upper main street parallel up the hill but it was too wet to take Cheyenne for a walk. For her the trip was in vain, a ride in the car and a snooze in the car while we stuffed our faces. her reward was a chew at home in front of the fire.  I don't think she cares much about the local food movement or braised frisee or anything quite that fancy. She is a plain dog and none the worse for that. I on the other hand want to go back to Knife and Fork and indulge myself.