Rusty And The Mangroves

I took these pictures a few days ago when it was warm and sunny and Rusty  and I were out enjoying the views. 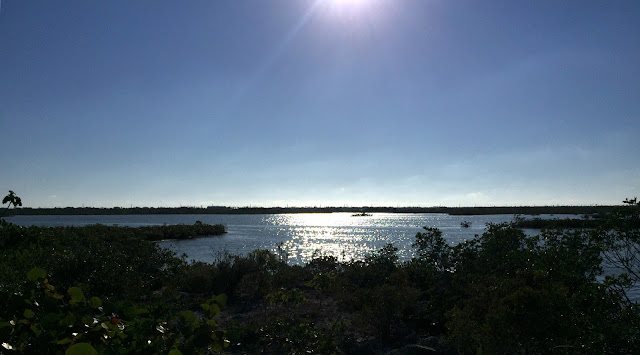 On my grumpy days  I'd like a bit of variety, a hill or a valley, an oak forest, a  view from on high.  On my less grumpy days I like to see January looking like this in the northern hemisphere. 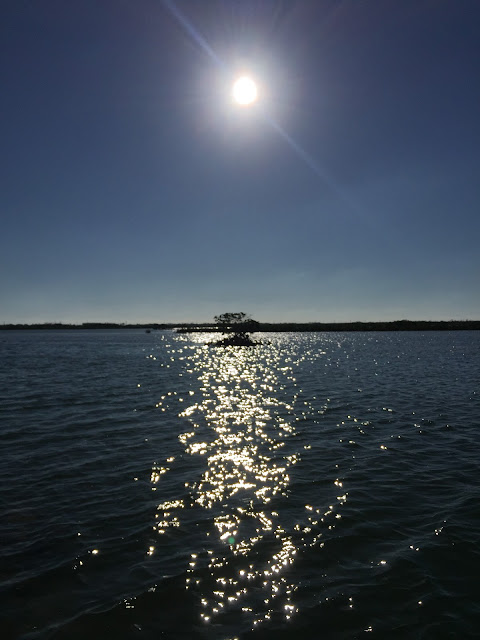 Rusty likes the cold weather of the recent fronts. He sits out in the breeze sunbathing and comes into the house his fur hot and his nose ice cold. So I was a bit surprised to come home to no greeting one day as I got off the Vespa. He was curled up under the car doing his injured feral dog protecting himself routine. He's done this before injuring his paw and then going into hiding in the bushes by the driveway so I knew something was wrong. Later I went to see hi and he hobbled out and squealed piteously when I touched his front left paw. 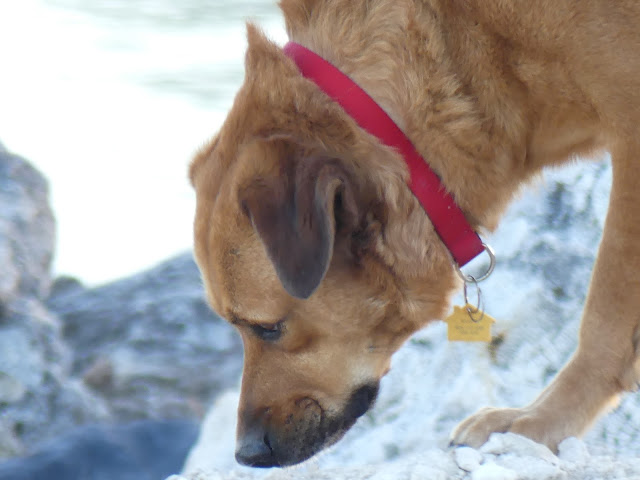 So there I was, my wife laid up with the cold I was just getting over and my dog laid up not eating, barely moving and moping on his own couch. The living room was a first aid post and I am not as good at playing nurse as my wife is. 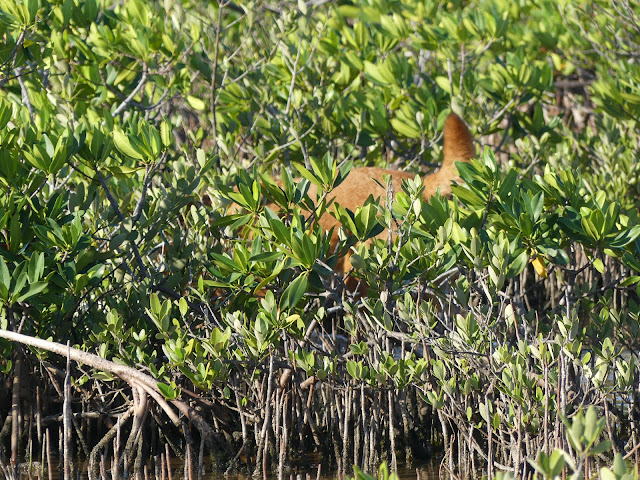 I don't know what Rusty finds in the mangroves, he reminds me of myself playing explorer when I was a kid  in the forests surrounding my home. I think he survived by hunting when he was abandoned, he must have done, and I suspect it's in his genes. to prowl. He doesn't seem to kill anything especially as there isn't much to kill except possibly crabs. In town he avoids chickens after being chased by them on the streets. These days he barely toys with iguanas anymore, occasionally catching one and walking away when it plays dead. To my relief he seems to have lost his killer instinct. We are  hunter gatherers at Publix after all and he does very well by my wife's food prep. 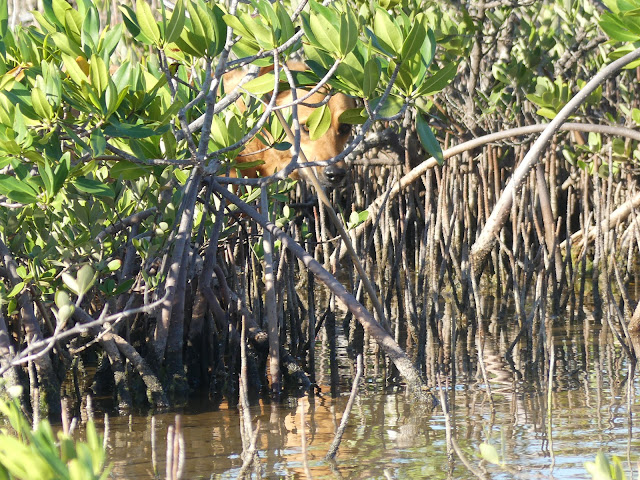 He goes splashing off and if I get bored I whistle and he comes trotting back though on my days off I let him come and go for a while until he gets tired. How he penetrates the roots and makes his way through them I don't know. Between us we take pictures and hardly leave footprints even. I have noticed a lot more trash and human waste on the trails I walk each week. I think of these places as rarely visited but it seems that for some people they make for cheap camping. I wish they would clean up after themselves. I suppose I look odd to them following my dog with a plastic bag but I'm no fan of stepping in shit anywhere. 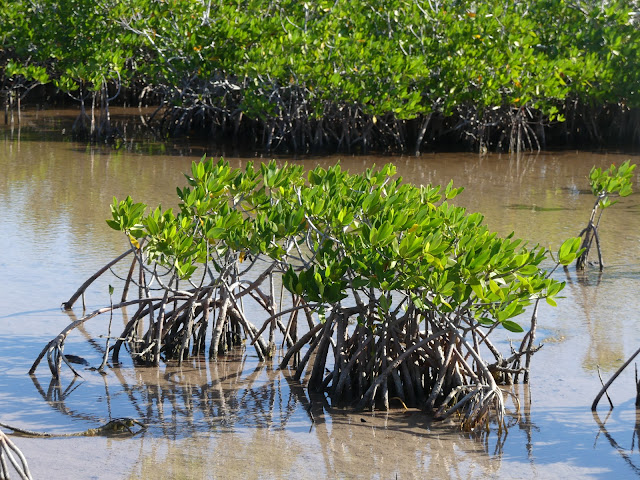 I see tire marks but I don't investigate, I prefer to maintain my fiction that these open spaces, silent and bare belong to Rusty and I alone for an hour or two after dawn. It helps me to sleep soundly taking a walking with the dog after a night at work. Its  a bit like taking a walking in a desert only this desert has small green bushes and lots of salt water. So when Rusty loses his appetite for walks I find myself missing these wide open spaces. It feels absurd to delay going to bed to take a walk by myself. 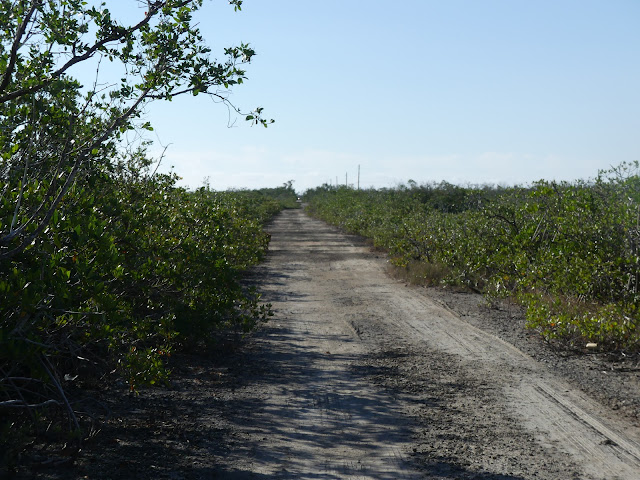 I suppose one could protect Rusty from himself but I think that a life lived without taking a  chance isn't a life lived a t all. What measure of risk you can endure varies between people. And dogs I suppose. Luckily for my dogs I like lots of walks and walks with variety. Unluckily for Rusty he has to learn to negotiate the debris field that seems to have penetrated all corners of these islands  since the passage of Irma and the litterbugs that came in the wake of the hurricane. 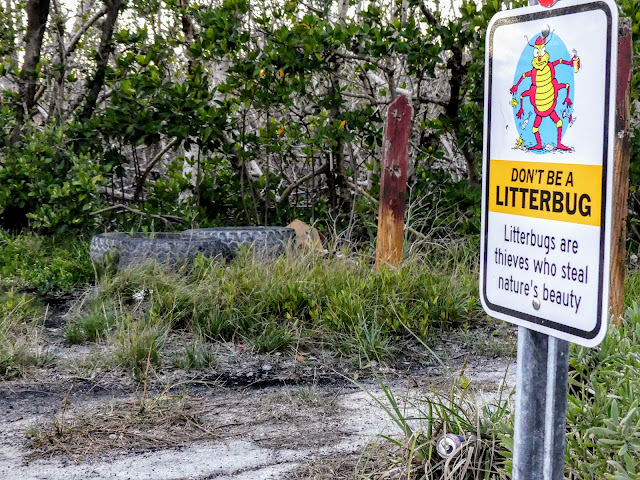 I see the pleasure of a camp fire I just don't understand the motivation that says to leave garbage in the wake of you experience out in nature. 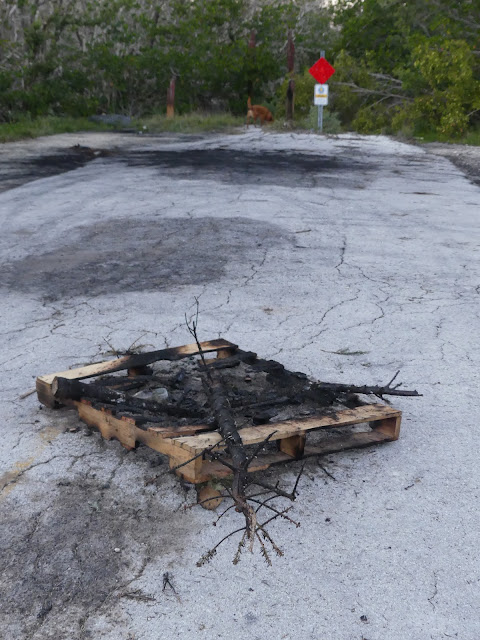 The injured dog in recovery pose. He never took to the open bed I thought was more comfortable but prefers the smaller bed that keeps him wedged in place. So be it. 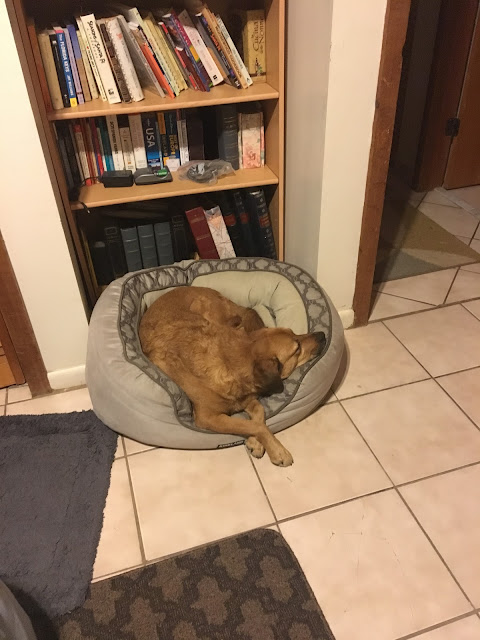