I found this story on Huffington Post and today is the 150th anniversary of the President's death so they ran the story for that reason. I have rejected revisionist views of the Lincoln Presidency for as long as they have been around and he has always been, in my estimation one of our greatest leaders. Who's to say not the greatest? That he had an affection for his dog well ahead of his time is just icing on the cake for me. It is well known on this page that Cheyenne is the apple of my eye, that unwanted dogs are my preference in a country where producing puppies for profit sickens me, so I thought this essay by Huffington Post's Arin Greenwood is an entirely suitable tribute to Lincoln on this day.
+++++++++++++++++++++++++++++++++++++++++++++++++++++++++++++++++++
When he was elected to the White House in 1860, Abraham Lincoln left his beloved dog Fido with friends.
And it turns out Lincoln was like more than a few of us whose pets have run of the house these days: He also left to those friends the dog's favorite horsehair sofa on which to nap, as well as a long, specific list of rules for how Fido was to be treated during his waking hours. For example, Fido was not to be scolded if he came inside with muddy paws, and he was to be fed from the dinner table.
Lincoln's attitudes and relationships with animals were in some ways ahead of their time. Matthew Algeo, author of the new book Abe & Fido: Lincoln's Love of Animals and the Touching Story of His Favorite Canine Companion, paints a picture of Lincoln as a deeply compassionate and empathetic person, whose respect for life extended from his fellow men all the way down to the smallest creatures. 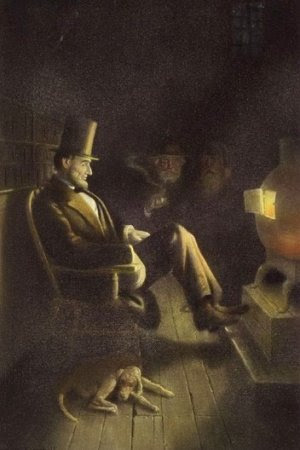 The dog in this portrait is thought likely to be Fido. Photo courtesy of the Indiana Historical Society
The book's publication coincides with the 150th anniversary of Lincoln's death on April 15, 1865. The Huffington Post recently caught up with Algeo by email to find out more.
The Huffington Post: Can you tell me about the most important animals in Lincoln's life?
Matthew Algeo: One of his earliest memories was of a piglet he adopted from a neighbor. When the animal grew into a fat pig, his father butchered it for food. Given the family’s meager circumstances at the time, this was perfectly understandable. But it made a deep impression on Lincoln, and probably fostered his progressive views on animal welfare.
I will quote Lincoln himself to fully answer:
“I saw the hog, dressed, hanging from the pole near the barn. I began to blubber. I just couldn’t reconcile myself to my loss. I could not stand it, and went far back into the woods again, where I found some nuts that satisfied my hunger till night, when I returned home. They could not get me to take any of the meat; neither tenderloin, nor sausage, nor souse; and even months after, when the cured ham came on the table, it made me sad and sick to look at it.” 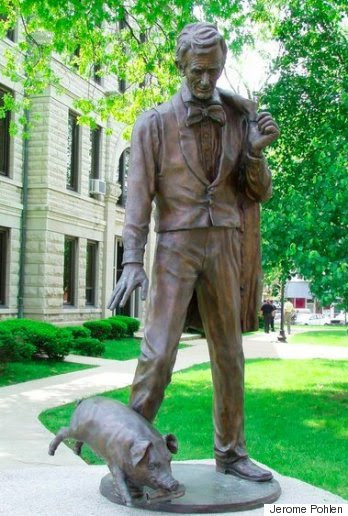 A statue of Abraham Lincoln with his favorite -- doomed -- piglet in Taylorville, Illinois. Photo by Jerome Pohlen
Then, of course, there was Fido, a mutt Lincoln adopted around 1855 when he was a successful lawyer in Springfield. At the time it was unusual to own a pet with no economic purpose. Fido was a pet, plain and simple. In a way he was a status symbol, proof that Lincoln had risen to the middle class.
You draw a connection in the book between Lincoln's attitudes toward animals, and his attitude toward slavery. Can you lay that out for me here?
This is touchy territory, of course, but I believe the empathy Lincoln felt for animals extended to all living creatures. He recalled vividly his early encounters with slavery when he rode down the Mississippi as a young man.
Lincoln witnessed unspeakable cruelty. He himself was incapable of cruelty. His attitude toward animals and his attitude toward the so-called "peculiar institution" were one [and] the same.
It could be argued that Lincoln’s empathy for animals permeated his politics. From his disdain for slavery to his inclination to pardon Union Army deserters sentenced to death, the mercy that Lincoln tendered even the smallest animals in his youth was magnified in his presidency.
“With malice toward none,” for Lincoln, included animals as well as his enemies. It’s remarkable, really. Even 150 years later, it would be difficult to find another politician -- let alone a president -- whose love of animals and political views were so inextricably linked. 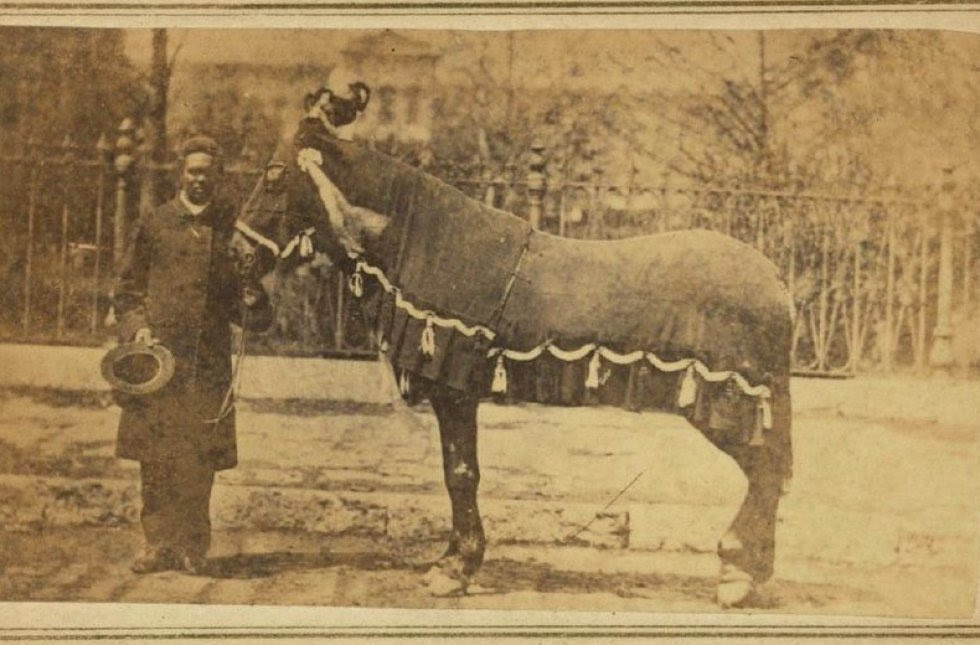 Abraham Lincoln's horse, Old Bob, on the day of Lincoln's funeral. Photo courtesy of the Library of Congress
How were Lincoln's relationships with animals different from his contemporaries? How were they similar?
They were very different, in that Lincoln regarded even an ant’s life as worthy of protection. After shooting a turkey as a young boy, the event left him so traumatized than he never hunted “larger game” ever again. It was almost unheard of for a young man on the frontier to eschew hunting.
On the other hand, Lincoln was not, as some animal rights advocates now claim, a vegetarian. Like his contemporaries, he ate much meat: beef, lamb, venison. It was practically a requirement of frontier life.
Tell me about Fido. All about Fido. Including Lincoln's list of things that Fido's new owners were and weren't to do with the dog, when he was left behind upon Lincoln's move to the White House.
Lincoln owned pets throughout his life. Around 1855, when he was in his mid forties, Lincoln adopted a stray dog found near his home in Springfield, Illinois. Lincoln named the yellow mutt Fido -- Latin for “faithful” -- and the dog lived up to his name. Fido was Lincoln’s constant companion, following his master everywhere, from the post office, to the bakery, to William Florville’s barber shop, where Lincoln’s shaves cost $1.25 a month.
After he was elected president in 1860, Lincoln, fearing the long trip to Washington would be too stressful for Fido, left the dog in the care of friends in Springfield. Lincoln also gave the friends Fido’s favorite horsehair sofa. They had to promise to never leave him tied up in the backyard. He was not to be scolded for wet or muddy paws. He was to be allowed inside whenever he scratched at the door. And he was to be given scraps from the dining room table.
Fido was a pampered pet. After Lincoln left Springfield for the White House, Fido practically became the town mascot. He was given free reign, and unaccustomed to mistreatment of any kind.
It was his pleasant disposition that ultimately did him in. One day about a year after Lincoln’s assassination, Fido saw a man sitting on the curb whittling a stick. In his friendly way, Fido went up to the man and put his paws on him. But the man was a notorious town drunk, and he took his knife and thrust it into poor Fido, who ran away, then curled up and died behind a church. So, ironically, the life of complete security that Lincoln had given Fido led in some way to his demise. 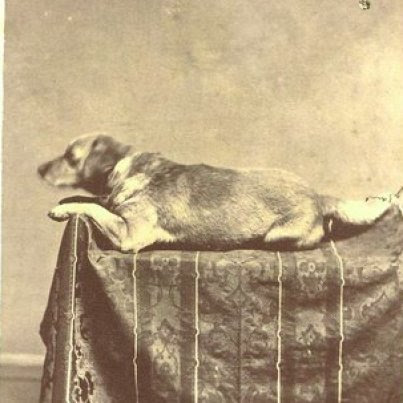 Fido, Abraham Lincoln's beloved dog, in an undated photo. Photo courtesy of the Abraham Lincoln Presidential Library and Museum
Did Lincoln have pets at the White House?
Yes! His White House was a veritable menagerie, with a dog, cats, rabbits, goats and ponies.
Lincoln was especially fond of the goats. He enjoyed watching them frolic on the lawn. When one of them disappeared, he was despondent. “‘Nanny Goat’ is lost,” Lincoln wrote to his wife Mary, who was traveling at the time. “Mrs. Cuthbert [the housekeeper] and I are in distress about it.”
Nothing more is known about Nanny.
What's your own history with animals? Did writing this book get you thinking about that any differently?
I’m a cat person! We have a big old orange cat named Copernicus (Mr. C for short). He’s a peach.
But writing this book definitely gave me an appreciation for dogs. It’s interesting: Lincoln was neither strictly a dog person nor a cat person; he was that rare sort of individual who loved both equally.
There are many issues on which Abraham Lincoln took a firm, uncompromising stand; however, concerning the superiority of dogs or cats, the Great Emancipator was uncharacteristically noncommittal.
What got you interested in Abraham Lincoln's life with animals?
While researching an earlier book (plug alert: Harry Truman’s Excellent Adventure: The True Story of a Great American Road Trip), I visited the Abraham Lincoln Presidential Library and Museum in Springfield, Illinois.
Inside a display case was an old photograph of Lincoln’s dog, Fido. This really struck me, how this yellow mutt had been such an important part of Lincoln’s life that he had him photographed. So I began researching Fido and found that Lincoln regarded all animals with a tenderness that was practically unique at the time.
What were your big surprises or insights, working on this book?
Pet ownership is a relatively recent phenomenon. For example, commercial dog foods weren't mass produced until after the Civil War, when a British company called Spratt’s began selling its dog biscuits in the United States.
The company was actually founded by an American, James Spratt, an electrician from Ohio who went to England to sell lightning rods. The story goes that Spratt noticed stray dogs on a Liverpool dock eating leftover hardtack, the rock-hard biscuits that were the staple food of British sailors at sea.
Spratt developed a hard biscuit especially for dogs, using a recipe that comprised wheatmeal, vegetables, beetroot, and meat—though Spratt was cagey when it came to identifying the source of the meat. His advertisements intimated it was buffalo.
Are there any lessons here, in Lincoln's relationship with animals?
Yes: Never trust a politician who doesn’t love dogs. (For the record, Scott Walker insists he is allergic to dogs.) 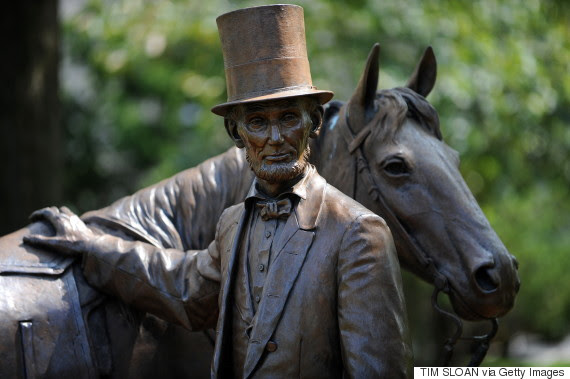 A life size statue of Abraham Lincoln and a horse stands in front of the entrance to his summer retreat.
This interview has been lightly edited for length. Get in touch at arin.greenwood@huffingtonpost.com if you have an animal story to share!
Posted by Conchscooter at 12:00 AM 2 comments: