Van and Philip came visiting and we went to Sunset Key for lunch at Latitudes Restaurant. Out of the breeze it was lovely on the beach, the view across the harbor only slightly impaired by the necessary plastic screens. 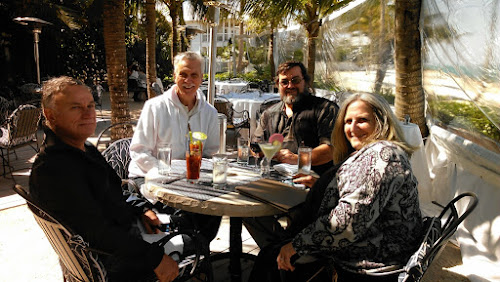 And the wind was noticeable as soon as we boarded the ferry at the Westin Resort on the waterfront. 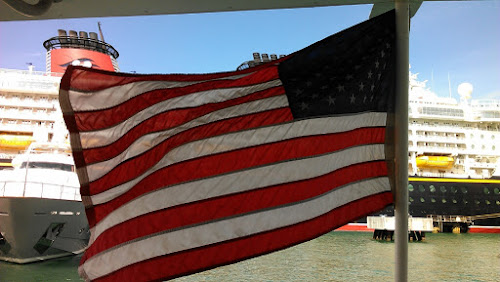 It was quite cool,  somewhere close to 65 degrees, but the boys, residents of Maine and former Key West residents were quick to admit they were feeling the chill. 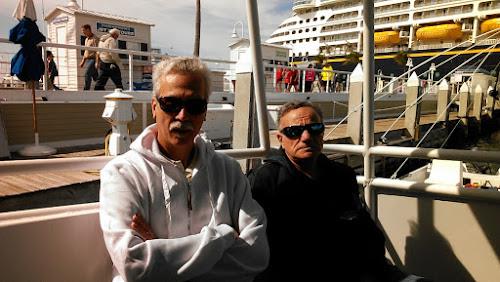 It only looked like the cruise ship was boxing us in to the Westin Marina. 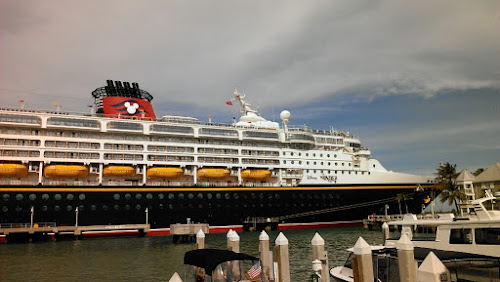 For some reason, even though the boat was empty my companions figured sitting outside was the thing. 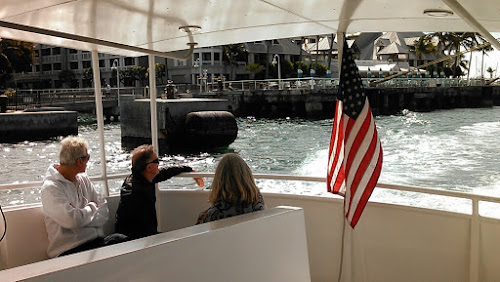 Nice views of the harbor... 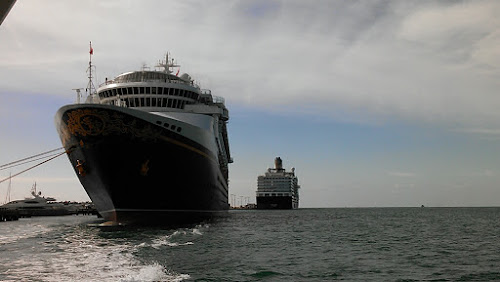 ...as we crossed the five minutes of water separating the city from the luxury island. 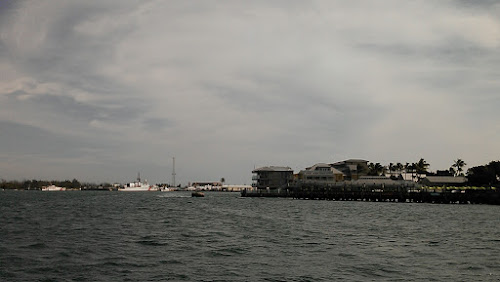 Hoi polloi at anchor, next to Wisteria Key, known to locals as Christmas Tree Island, thanks to the Australian pines that flourish there. 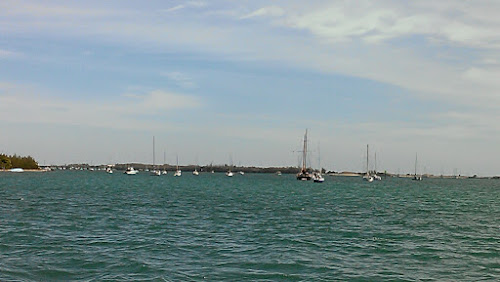 We were thrust into the lap of luxury, a place where drinks with umbrellas appeared as if by magic,  as we waited for our cheese plate first course. 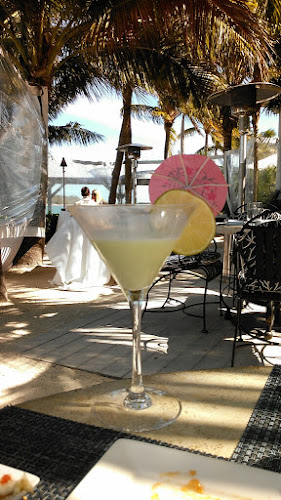 Victor took our picture so I reciprocated while he was between plates, glasses, trays and orders. Latitudes is monstrous pricey (and romantic) for dinner but lunch is actually quite reasonable with a whole long list of sandwiches between fifteen and twenty dollars.  We lounged around talking and eating, and enjoying the sun, while Victor waited on us. 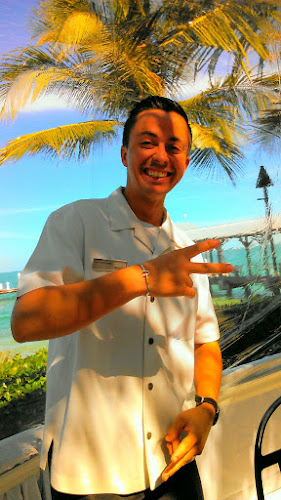 Our conversation centered around where we might like to live. Van and Philip like to move around, buying and selling homes and tasting life here and there. We last visited them in the summer in Boston and now they live in Portland up the coast. What makes for a desirable place to live was the subject of our meandering lunch time conversation. Phillip had an interesting take: he said the town has to have an edge, citing Boston as being too clean and middle class in his neighborhood. I started the conversation by expressing my confusion over the state of Key West, dirty chaotic and unorganized, and yet appealing perhaps because of that. "Decadence" Phillip said, saying a touch of the down at heel makes a town interesting. I need to come to terms with it, an ongoing process. The meal was excellent, the conversation was thought provoking. 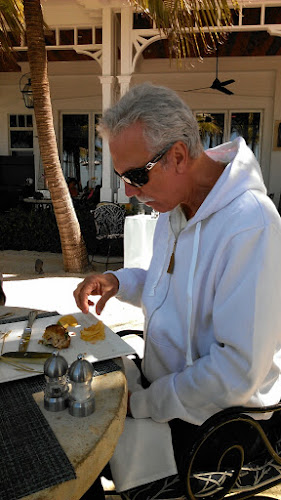 I did kind of splurge with red wine, coffee and a suggestion we go for dessert as well. My vote for white chocolate bread pudding got nixed but the three flavored  creme  brulee  was just fine. Everyone else preferred the coffee flavored section, I preferred the bourbon but I didn't mind the mango in the middle either. 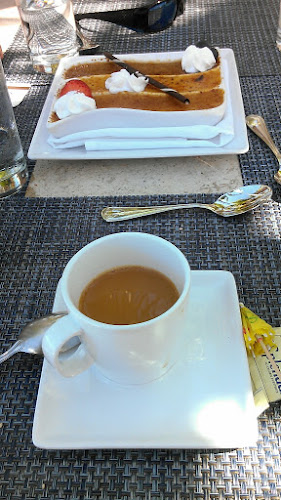 Sunset Key used to be called Tank Island because the Navy built fuel storage tanks here (and never used them) but when the city sold the place for a pittance to the people that own the Westin it's fate as a sterile "Key West style" retreat was sealed. I have been round the island and it looks pretty much all like this, as seen from the restaurant area. The wealthy and the famous come here to get away from their tedious fame and vacation bum-free, chicken-free and reality-free. If you want to stay on the island they do have some cottages for rent for the well heeled masses. Guaranteed to be quiet, though noisy colorful Duval is but a 24-hour ferry ride away.... 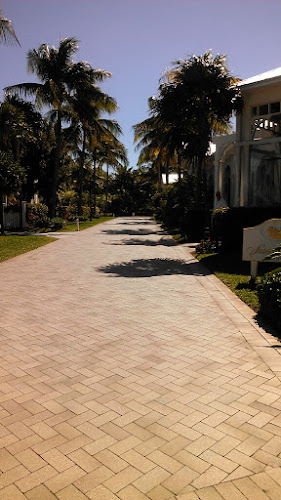 Tank Island used to look like Christmas Tree Island does today, created out of material dredged from the harbor floor when the modern deep water turning basing was created in front of the city. Sunset Key has a pleasant little sandy swimming beach for the summer visitors when the waters are properly heated by the sun. 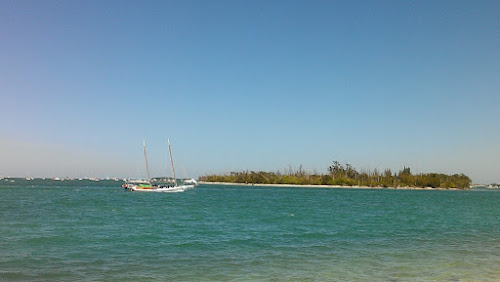 And then we were back, and the crowds poured off the boat and mixed themselves back into the Key West street scene. I was sitting outside on the way back, such was the crush in the cabin and next to me there sat a grumpy looking dude dressed half way to homeless (worse than me) who carried some large bag and put me in mind of Pablo Picasso. He said nothing and didn't encourage conversation but he appeared from the depths of the island so you can speculate as you will on who he is and what his story might be. 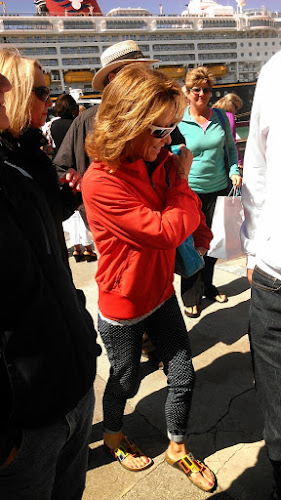 At home, meanwhile, Cheyenne got on with the serious business of getting some beauty sleep. 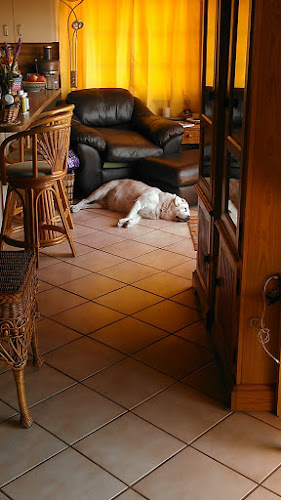 A good day had by all, was Valentine's this year.