Mine was not a bad plan. I entered my destination, 3800 Fleur Drive in the phone's navigator and got a firm blue line across town, carefully avoiding points of interest and entanglements like parks and lakes and any such fripperies. I determined the walk would do me good and I figured there was more to see in Des Moines than four lane highways. I got one half of the equation right. 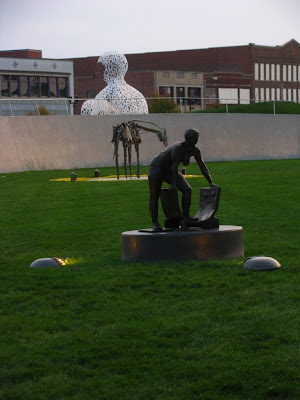 The statuary in the park deserved more time than I had available. Darkness was falling rapidly as clouds closed in overhead, and I took pictures as fast as I could (and will add them as soon as I can figure out how) but I didn't take the time to match information boards to scultpures. I saw a wild range of creatures and fantasies lying around in the grass. 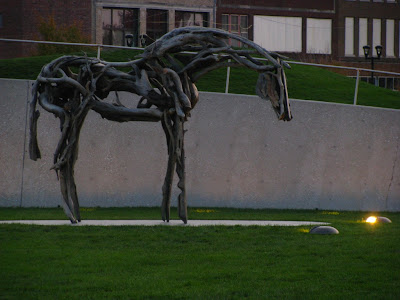 I saw bugs that looked decidedly Kafkaesque, a bronze see-through horse with head hanging in the style familiar from the illustrated Don Quixote and a cogitating jackrabbit with huge floppy ears sitting atop a squashed ball. 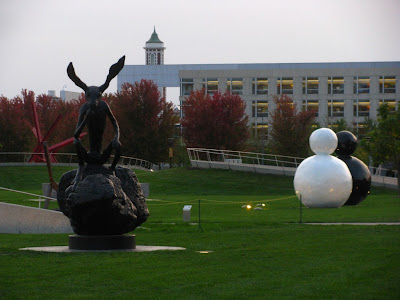 There were no bums to be seen passed out in alcoholic stupors (they can't survive the winters, I was told with some satisfaction by a local. Snow has it's uses) but there were small children running while screaming in Spanish, families of dishwashers and laborers giving Des Moines a splash of ethnicity.
if we're going to be honest I probably looked more like a gentleman of the road than any of the I encountered as I took off along the sidewalk that led through the park, past a brewpub/hip restaurant and over an impressive iron arch dedicated gorge Washington Carver. A young woman with an even younger black Lab approached and I stopped to ask about the park I planned to walk through. In Key West incompetent tourists are constantly calling 9-1-1 after they get locked inside the cemetery at dusk and we have been issued a key to give to officers sent to release the silly buggers. I think the sexton got tired of being woken up at all hours to rescue the stranded. I did not want the same stranding fate to befall me. 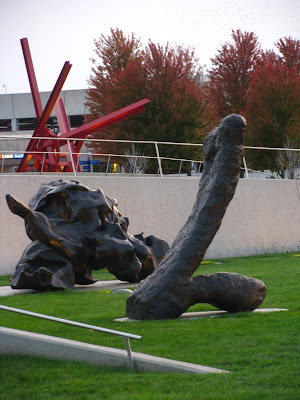 I was quite encouraged by her laughter at my preoccupation, "I think you'll be okay," she promised completely unafraid of an unscheduled encounter with a stranger at dusk on an unpopulated sidewalk. I walked on, crossed the bridge which spanned a rather unprepossessing river lined with mud and rocks. Here I figured was evidence of the prolonged drought that wrecked food crops this summer across the Midwest. 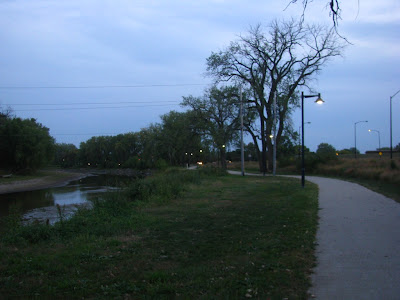 Large deciduous trees, maples and oaks perhaps, lined the path along the riverbank and I marched steadily along my feet shuffling dead leaves already barely visible in the failing light. My navigator's blue triangle on my phone was adapting well to my driving eccentricities and obediently showed my place on the thin gray line that marked the walking path through the park. I was not lost, amazingly enough. 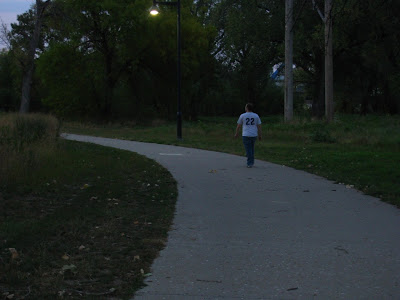 I was not alone, for lots of people were out jogging and a few were cycling, all properly dressed for the event in ridiculous tight shorts and brightly colored t-shirts all cut off from the world around them by ear phones, those excruciating little plugs that sit snug inside the ear canal and give the user a headache. I noticed one other thing, everyone kept to the right. It was as though they were driving, though being locals they had no need of pocket navigators as I did. They walked and ran and cycled as though they knew where they were going because they did. I kept pausing to study my phone, or send a text message to friends at home, and my distraction led me to abandon the strict right side of the path quite frequently. It was on one such occasion when I was startled into levitation by a rough deep rasping hacking cough that sounded like it had come from a not entirely pleased mastodon.
Imagine my surprise when a dainty young thing in black flapping a pony tail and striding smoothly along in a manner that denoted total control passed me on my left! She flashed me an irritated glance to remind me that my eccentric middle of the road walking had almost caused to her alter her pace, god forbid. I shriveled under the glare and promptly shuffled back the curb. As she swept imperiously by I saw another jogger, a man my age who should have known better than to wear spandex in public, approach from a side trail. I was astonished to see him look carefully to his left and time his arrival on the main trail just as though he were driving a freeway onramp. He joined the flow with nary a hiccough. It was clear to me, as I reined myself in one more time and stumbled back to the curb, that Iowa is a complicated place to take a walk.< br /> 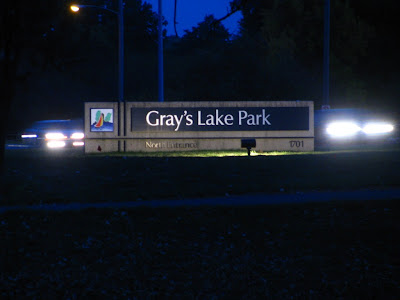 Gray's Lake shone black under the glare of street lights, a pale moon and utter darkness from the west. There were crowds enjoying a balmy fifty degree evening made bearable for me by the absence of breeze. They sat in family groups at picnic tables and exposed their bare arms to what seemed like should have been frost. 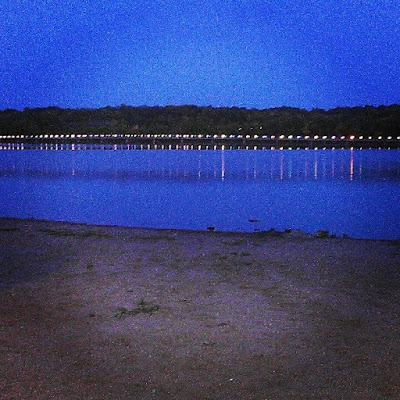 My bag was heavy, my motorcycling woolen long sleeved undershirt stuck to my sweaty arms and my boots were starting to feel heated on my pounding feet. I had perhaps a mile to go to the hotel. I was determined to keep off the multi-lane Fleur Drive as I approached my destination. 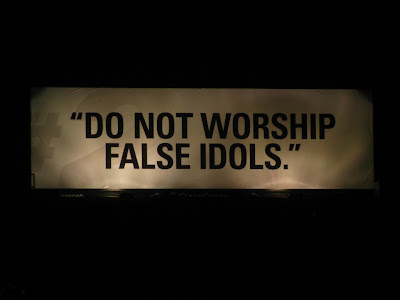 In retrospect the message in the billboard spoke to my inner depths about my faith in the accuracy of the little blue triangle. Anyway after the joys of the park and the bikepath I followed my blue navigating triangle through a residential subdivision of brick apartments, eanisive grassy areas dotted with canopy trees dropping browner leaves and no sidewalks. To my astonishment I had located thenonly hill in all of Iowa and I went into low gear, shuffling my suitcase strap onto then other shoulder, lowering my head and charging up the hill like a doomed Confederate in Pickett's Charge. The top of the hill was no such thing and I climbed still further trusting my navigator to take me where I would never otherwise have gone. I was wandering through private neighborhoods, places where strangers aren't supposed to venture, apparent dead ends that opened by surprise into other narrow wooded streets, known only to locals and my GPS. Eventually I followed the blue triangle to my destination, a little checkered flag on the map which was not, itturned out the hotel. No it was, much to my surprise a, Methodist church, which as attractive as it was, did not hold a reservation for me to sleep. Puzzled I crossed the side street and staggered into a Quik Stop gas station. I could have used the emergency phone I saw standing alone and unused in the park. I don't think Des Moines has too many emergencies. It's a very well regulated town and I heard no sirens. 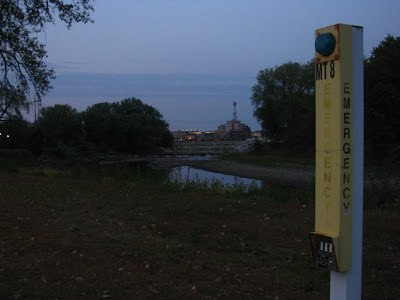 I called the hotel and immediately realized my error. 6800, not 3800, which my little blue triangle figured was 1.7 miles away and four minutes by car further down lovely Fleur Drive. Not on my feet. I was toast. Had Genghis Khan's hordes been coming to rape and pillage me I would have stood there and told them to have at it, I was past caring. I wanted civilization, first world amenity and babble on a television screen to wash away any lingering coherent thoughts in my aching body. Now I had to use the Web function in my life saving Saint Bernard of an Android phone to find a Des Moines taxi, take as long as it might to arrive in this corner of Siberia.

There are occasions, I admit it reluctantly, when this Atheist has a hard time rationally explaining away miracles and one such occurred right there at the execrable inconvenience store. My feet were steaming, I was hungry past caring as I had forgotten to eat lunch had any been available that afternoon on the bus and my sweat soaked long sleeved undershirt was turning to frost in the glacial night air. I was sweating and freezing at once like an arctic explorer facing frostbite, not like any sensible visitor to Des Moines should be feeling. As I fiddled with the phone my Lord and Savior took time out from saving souls in African missions and separating fighting heathen in foreign lands, and sent an unoccupied cab to the fuel pump right in front of me.

What's more Sergei was delighted to have a passenger as he was driving unoccupied in my direction to get in line at the airport and I was just a bonus in his schedule. I bought cheap beer, all they had, and a hefty sandwich and a banana to devour in solitary splendor in my room (the idea of dining in a restaurant fully clothed appalled me. I wanted nothing to do with sticky damp clothes for the next twelve hours) and got in the cab. We had a cheerful ride as I explained my predicament. Sergei laughed a Russian laugh and looked through the passenger window pointing out Fleur Drive was no place to take a stroll. I looked at the crumbled curbs, patchy grass, broken signs, potholes and puddles and was reminded of North Roosevelt Boulevard and agreed walking here would have been absurd. I told Sergei I was delighted to be arriving at the hotel in a sensible cab and he was my cover for my crazy walking idea. He giggled delighted at the idea of pulling one over on the snooty hotel clerk and we made sure he parked solidly in front of the doors as I poured myself back onto my aching feet. I gave him ten bucks for a six dollar fare and he was delighted. I got a key and a free cookie (”complimentary" in the lingo of modern business euphemism where reality is eschewed) from the delightful clerk who made no mention of my disheveled fleeing refugee appearance and I collapsed in my palatial $84 room. I had coffee, bottled water, and an hundred channels of babble, a hot shower with dry towels and a vast spacious bed. I was where I was meant to be. At last.

I suppose one could say the GPS is a brilliant tool for finding one's way, and I further suppose that had I not had it I would never have seen what I saw strolling through the city. Without GPS I'd have been obliged I to call a cab upon arrival at the awful bus station. Of course had I been riding the Vespa...it would have been paper maps all the way. Until I got lost, then I'd have had to revert to the advice and support of the Great Saint Bernard in my phone. May I never leave home without him.
Posted by Conchscooter at 12:00 AM 4 comments: