We had no idea what to look for in Charleston, South Carolina, even though we had been here before. So my wife the Jew took us to the synagogue, as one does. We were standing outside this Palladian temple reading the historic markers when this woman in a red blouse walked up and said "Are you here to see the temple?" We nodded and followed her and suddenly found ourselves on a tour of the oldest synagogue in continuous use in the United States. 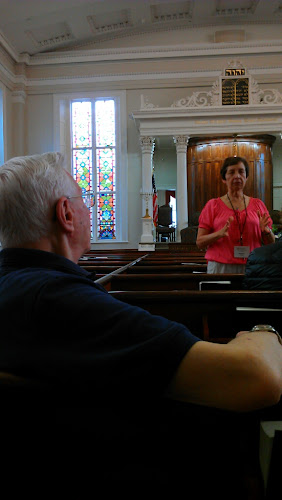 My wife has dragged me, the lapsed Catholic, into synagogues all round the world yet this is the first one I've seen that has a domed roof and Grecian columns though according to our guide there is another similar one in Minnesota. Go figure. There is so much about synagogues that reminds me of a Catholic Church, the lighted lamp, the candles, the lectern and so forth. And the stained glass windows which in Catholic tradition show pictures of apostolic endeavor. Jews don't approve of images of G.. the unmentionable so the designs are geometric. 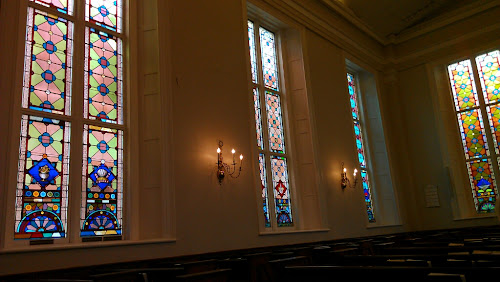 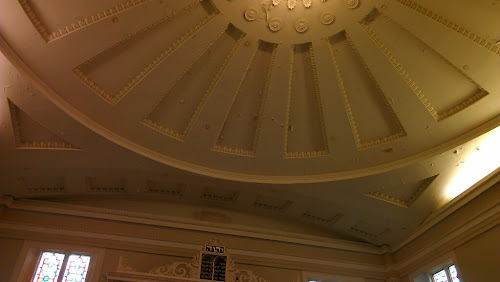 We dutifully looked up at the fine which is solid, she says but needs some work. Plaster has been known to drop from the impressive dome but apparently it's stable right now as the congregation waits for a local benefactor to fork over half a million to fix it permanently. This is also a synagogue with an organ which for some makes the Temple too much like a church. 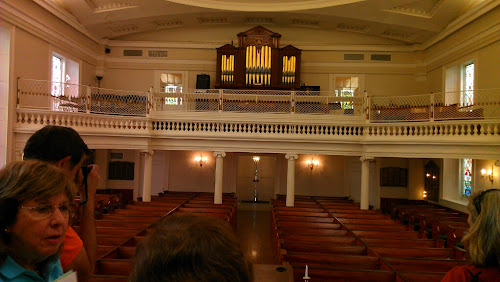 The history of Judaism in Charleston is actually quite unusual even for goyim like me. They originally came from Portugal and Spain to escape the Inquisition (my people on the religious warpath). Peter Stuyvesant, Governor of New Amsterdam didn't want them as they might be competition for Dutch merchants so they found refuge in Charleston where they were accepted like regular white people, allowed to marry, do business and own land without restrictions. 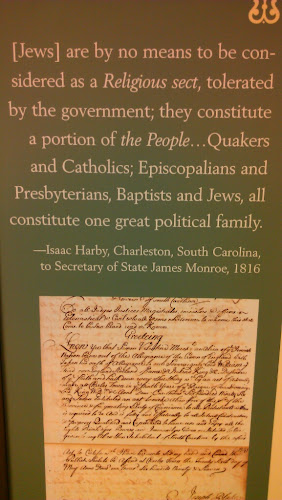 All of which sounds normal today but was a rarity for 18th century Jews. They also ironically enough became slave owners. 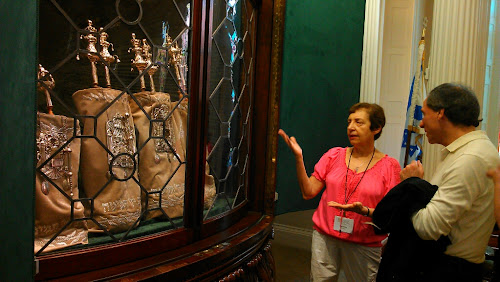 The four Torahs displayed in the synagogue are housed in a re-creation of a Sephardic Torah which is apparently housed in a wooden container rounded in front and flat in the back. Who knew? Not me, nor my Ashkenazim wife it turns out... 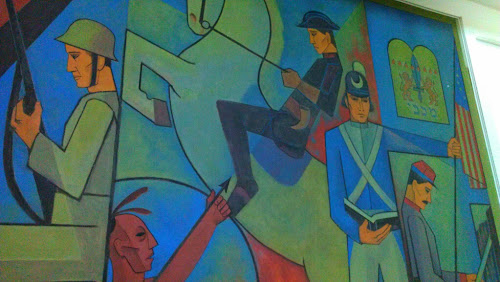 There was a discussion then about the current Jewish population of 7,000 people in a metropolitan area of three quarters of a million people. They have schools and services, a history of participating in the culture and history of the city. Speaking of which we then wandered off up the city market: 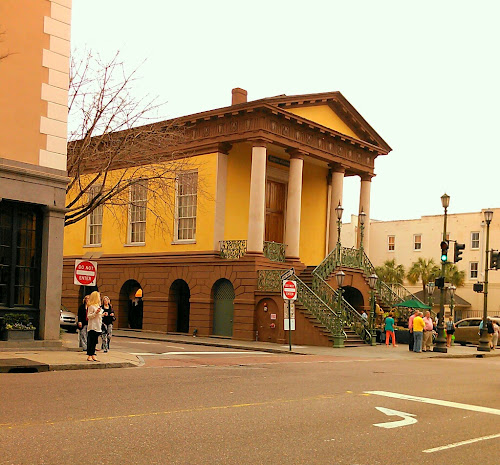 Most of it was pretty regular stuff, dust catchers, soaps, jewelry and all that, no food but they did have one dude selling Gullah art from the barrier islands. We got a print and a woven basket and ear rings and then we went on our way. 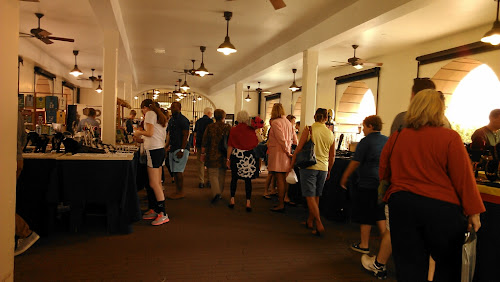 Charleston has a reputation as a picture perfect city and it deserves it. 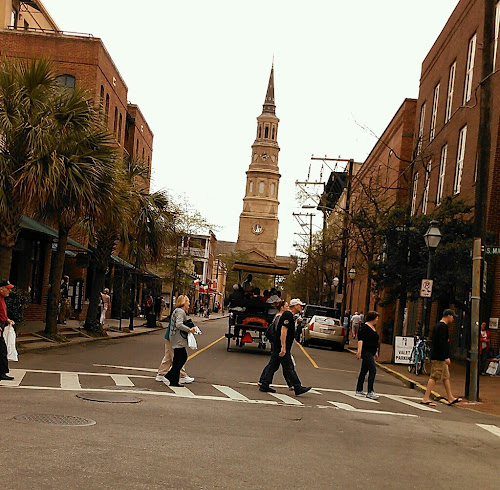 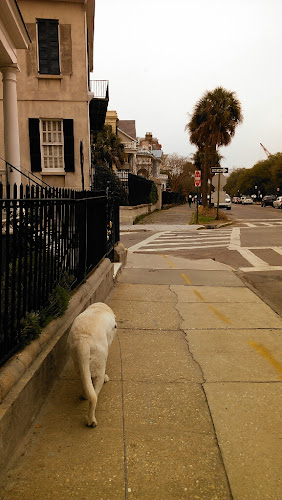 Not that she cared about the history. 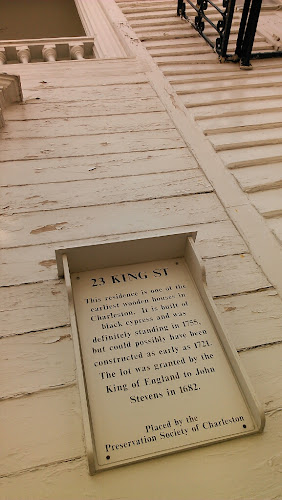 And there was a dog friendly city park, which she did care about. 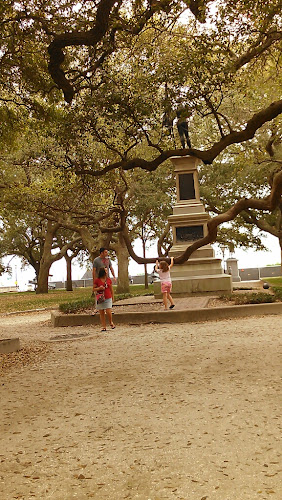 History is never far away even if it celebrated the unpleasantness between the states from the loser's perspective. 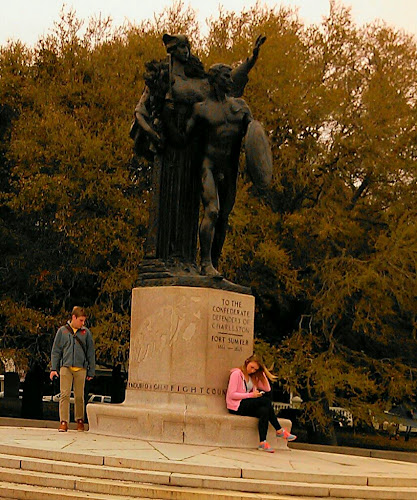 Charleston is always picture perfect, no bums or vomit wrecking neighborhood planters. Everything reeks of stratification and privilege in a town passed by in the rush to modernize. Even our cell phones worked more like 19th century telegraphs than modern Web centered tools. Perhaps that is just due to Verizon's ever crappy signal. I could never dress well enough to live here, even on my best days. 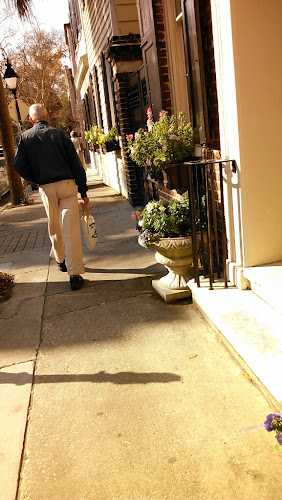 Frankly I found it exhausting to be surrounded by so much perfection, and every single house is perfect believe me. 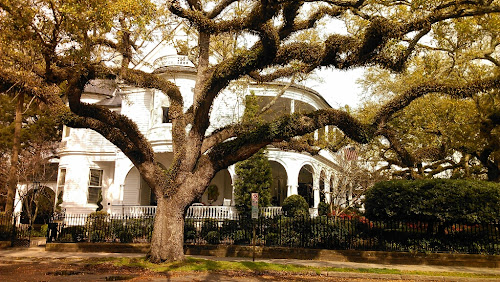 Their owners seem to enjoy being gawped at, but this isn't Key West. In the Southernmost City neighborhoods are mixed, mansions sit next to bungalows and as much as the city is getting gentrified, it is nowhere near as homogenous as the Holy City. 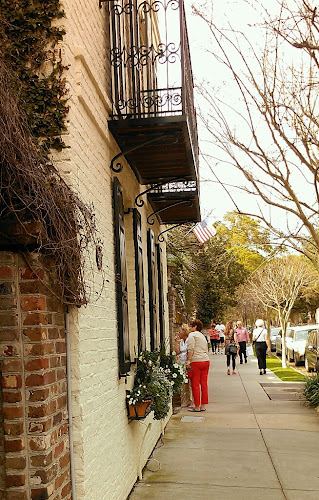 Charleston is not bicycle friendly, there are no bike paths on the streets, not that we saw too many bikes or scooters for that matter. There aren't many one way streets either, but drivers are quite courteous and the city prides itself on its good manners. 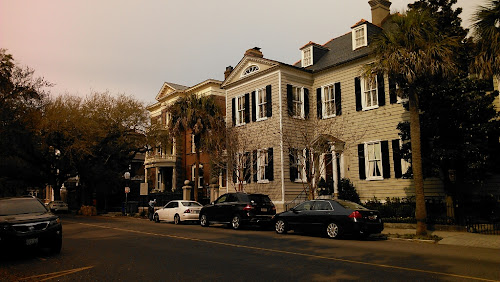 These homes do not change hands as often as you might think in modern America. There is a great deal of pride in Charleston on the subject of longevity. They count the number of generations your home has been in your family. 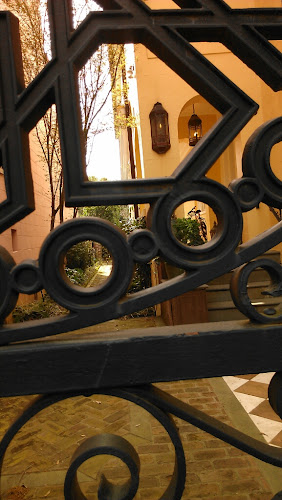 One thing I liked a lot was the absence of the gruesome red plastic hardware store "No Trespassing" signs that disfigure Key West's Old Atown. Everything here is in good taste: 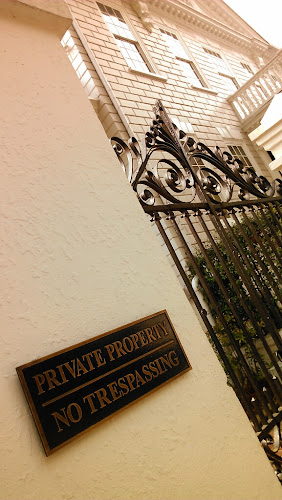 This is a home that, if you read the accompanying sign... 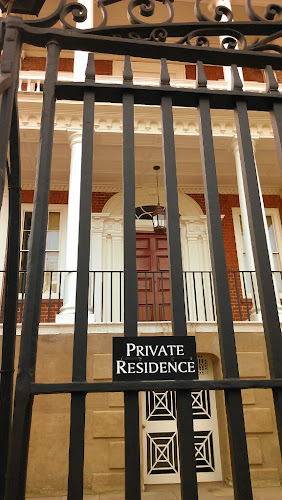 ...has an impeccable pedigree: 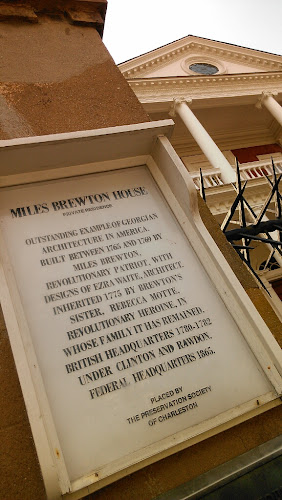 I liked this next sign, especially as it implies you might gain entry to the Sanctum Santorum! 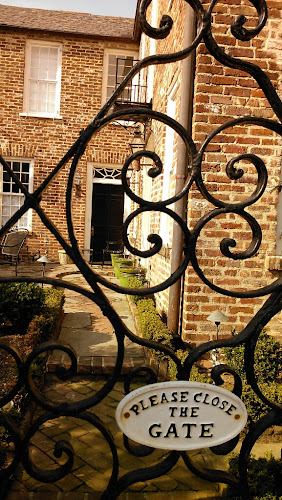 It's mile after mile of astonishing architecture lovingly preserved... 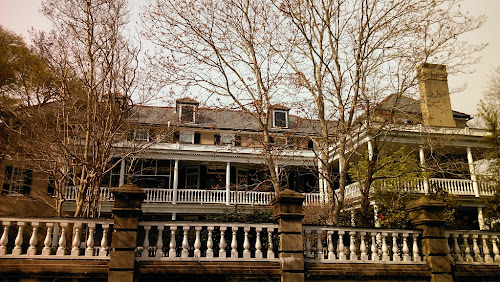 What's wrong with me? I find this all too much. There is certainly some horse puckey in this town from the mules hauling visitors around in carts but there is a sense of sterility that is disturbing. Charleston fired the first shots of secession and does not seem to have come to terms with its role in the ensuing fiasco. Judge Magrath, was it seems the Federal official who fired the opening salvo in the pursuit of secession. 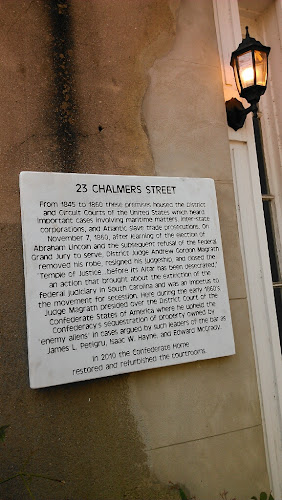 Cheyenne loved the walks and we did too. Charleston is a great place to visit with lots to see. I think part of my anxiety about this town is the possibility that this represents the future of Key West. I know a lot of what is irritating about Key West is what gives it color and flavor. Charleston is so bloody perfect it irritates me in a different way. 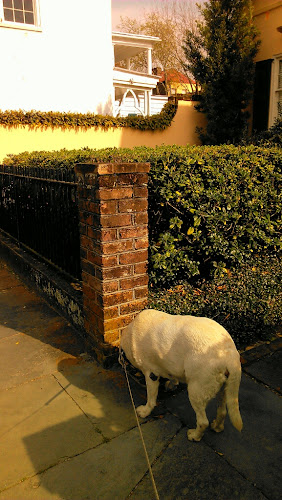 We need to come back and see it again. My wife never tires of telling me that the first time we went to Puerto Rico we loathed the place. Now we can't wait to go back. 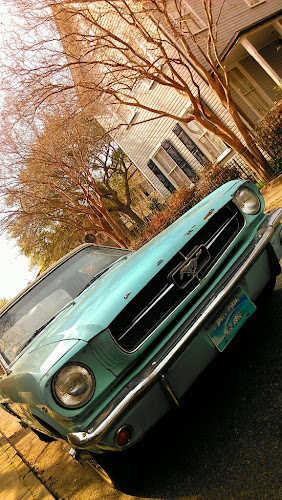 Check it out, every view is a photo opportunity, but I'll tell you this the cobbled streets are hell in a car. I can't imagine bouncing down these streets on two wheels... And I mean bumping because these cobbles are anything but flat. They are astonishingly uncomfortable and sure slow traffic down to walking speed! Fortunately they rather rare in Charleston, but you'll feel them the minute you drive them. 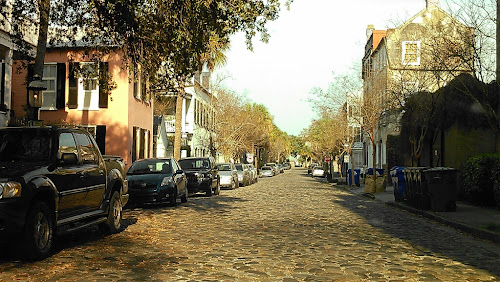 One other thing: the quality of the food we ate in this town disappointed hence no food pictures. Wilmington and Savannah do better than Charleston so I have to believe we haven't got this town right. Bland food in the Palmetto State? That can't be right! 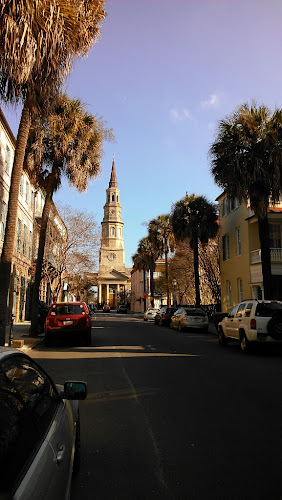 I give up, Charleston confuses me. 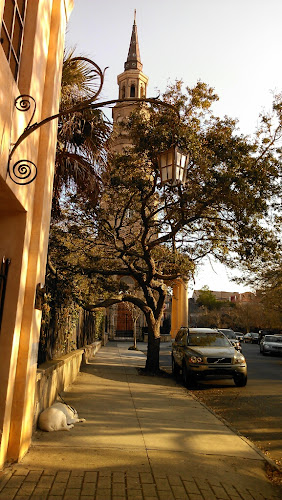 It wore Cheyenne out.