The Bridges Of Monroe County

The story goes that when a tourist heard a tour guide talking about the 42 bridges linking Key West to Miami, the tourist piped up and asked which was the best bridge to drive to get back to the mainland? 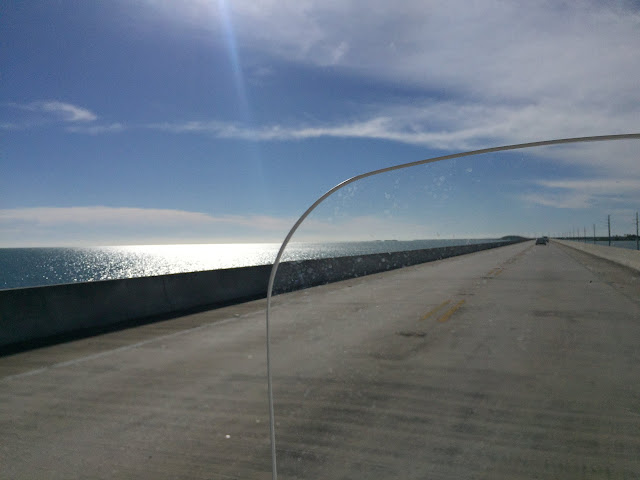 To find oneself with a reason to ride the 30 miles from my house to Marathon on the Overseas Highway was a very pleasant thing last week, when the sun was out, the breezes were light and temperatures were hovering close to 70 degrees. On my way home from my chores in town I decided to dawdle and stop often and with no better reason than to take a few pictures. These are of the Seven Mile Bridge, like all the "new" highway this broad two lane bridge was put into service in 1982, cutting down the time it takes to drive from Florida City on the mainland, to Key West, about 125 miles apart. 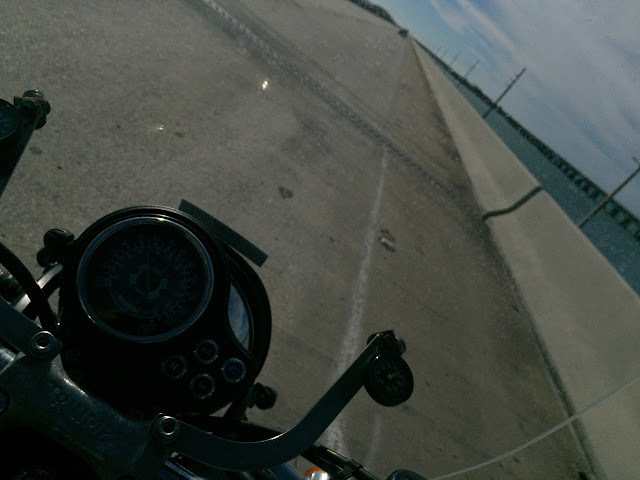 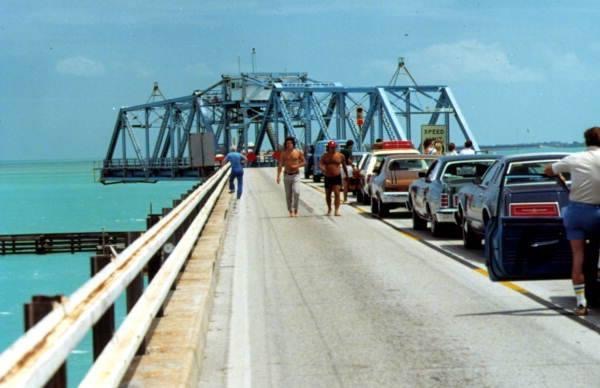 The memorial to him is embedded in the cement of the new bridge, a picture I took in slow summer season: 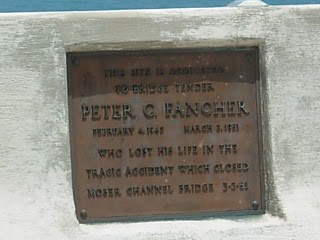 The Seven Mile Bridge like all the exposed bodies of water along the route, is a tourist attraction and the authorities in Monroe County have made it easy to stop almost anywhere along the shoulder to admire the view. Unfortunately a lot of the time visitors prefer to slow down on the bridges instead of stopping on the shoulders. Happily passing is legal on the Seven Mile Bridge and it's a handy section of roadway to dispose of dawdlers. Or pedestrians crossing in front of traffic... 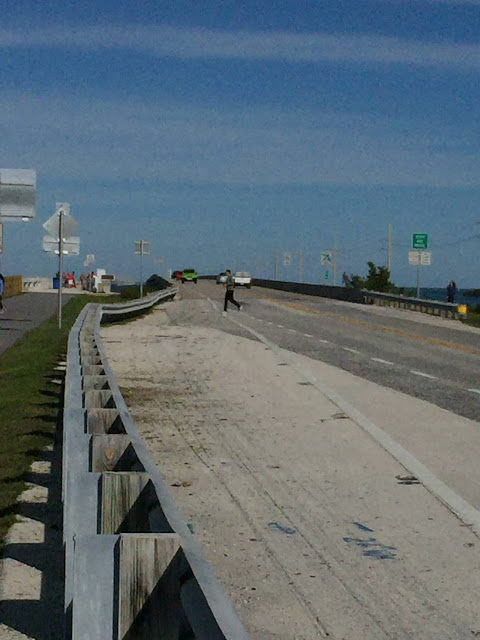 The old bridges built by Henry Flagler's railway engineers in 1911 are still standing and quite solid. Some few sections are restored and used as pedestrian or bicycle paths or as fishing platforms. Until 1935 the railway ran to Key West and took all day from Miami. A hurricane knocked it out in Matecumbe Key and the line languished. Flagler was long since dead and the Florida Keys extension had never turned a profit so the state of Florida bought the right of way and turned it into a roadway in 1938. Finally you could drive uninterrupted from Miami to Key West. 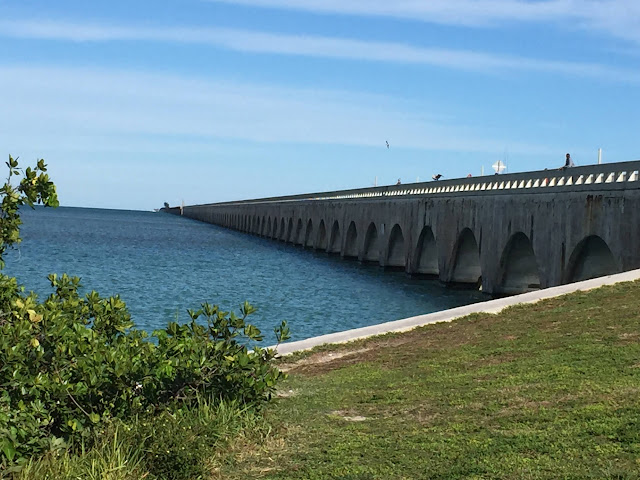 Then in 1982 they opened a new Highway alongside the old cutting down the driving time as I recall from Homestead to Key West from five hours (or more) to less than three (depending on your nerves and speed). 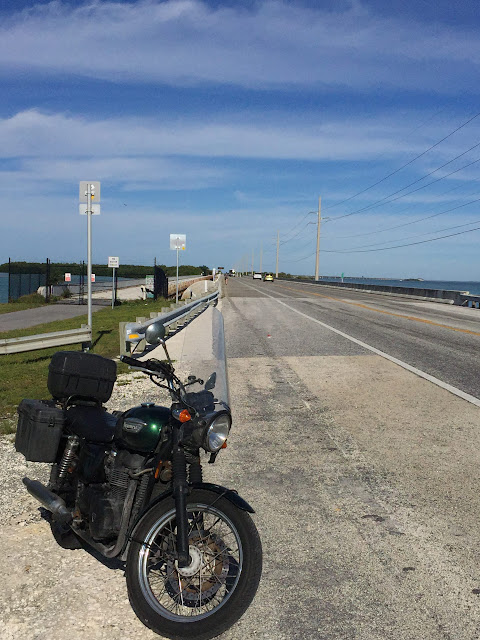 The old Flagler railroad bridges are slowly getting refurbished and as a precaution many are closed to pedestrians: 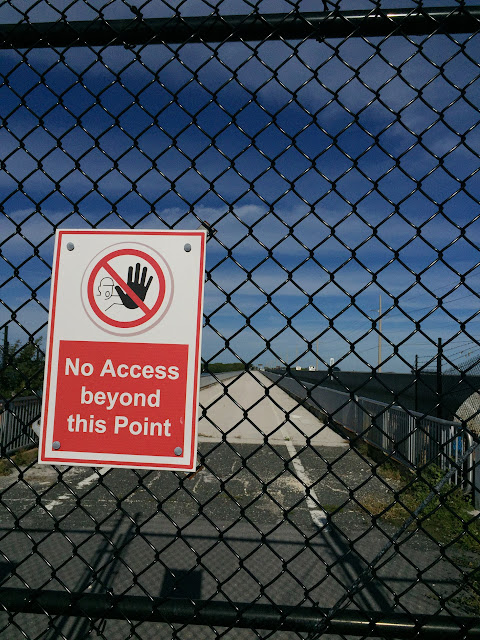 The old bridges make for excellent viewing platforms of the brightly colored waters. Pollution hasn't done the coral reef any favors and visibility has deteriorated but the waters are still quite spectacular. 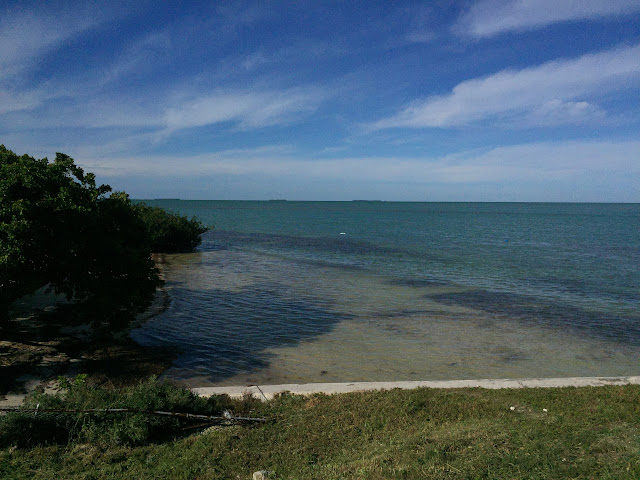 The speed limit on the highway never goes above 55 mph though as you can see it is broad mostly straight well marked and easy to drive much faster. Considering there is no cross traffic not many animals or pedestrians and not many cyclists you'd think they could let you go faster. Killjoys. You could make the point there is no need to go faster than 55 but then the irony of the views would be lost, wouldn't it. Sometimes I see people pass on double yellow lines and so forth such that I wonder perhaps I missed the news and maybe Key West was coming adrift from its moorings and might soon be gone. 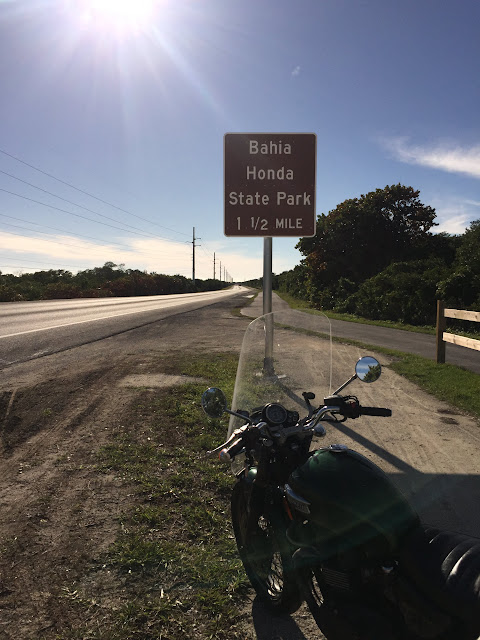 On the subject of the old bridges you can see the original railway lines used as handrails, now obscured by modern ugly aluminum hand rails, but the rusty originals are still there: 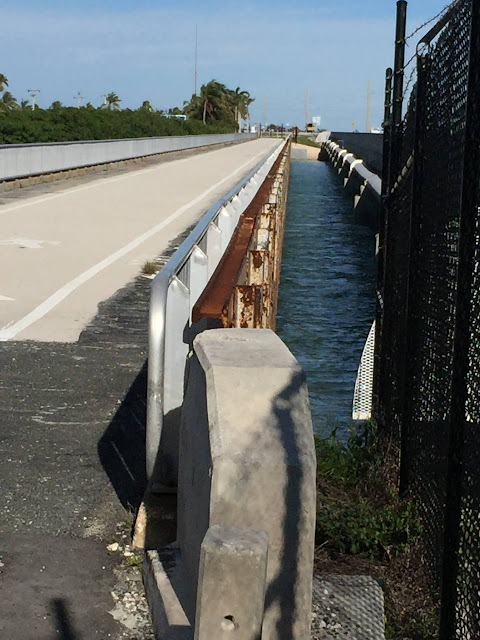 And the first mainland water was piped to Key West in 1942 for the war effort. A bigger pipe was installed with the new roadbed and that is still there of course, painted white and hanging alongside the road: 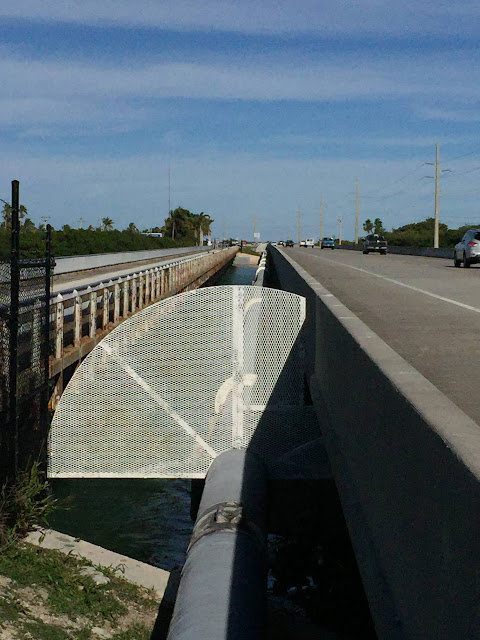 Before the pipes were installed everyone lived off rainwater. Nowadays technically it is illegal to drink cistern rainwater which may only be used for stuff like watering plants. This is the weirdest state. There is nothing the government won't do to help corporations while prattling on happily about freedom. Solar panels? Nah, they are officially discouraged for fear of upsetting power companies...in the Sunshine State. You won't see solar panels powering homes in the Keys. I drank cistern water for a decade and here I am. I used solar power on my boat twenty years ago and the rest of the world has caught up but Florida, including the Conch Republic which is merely a state of mind, is firmly in the hands of proudly know nothing leaders in thrall to the barons of steam era technology. 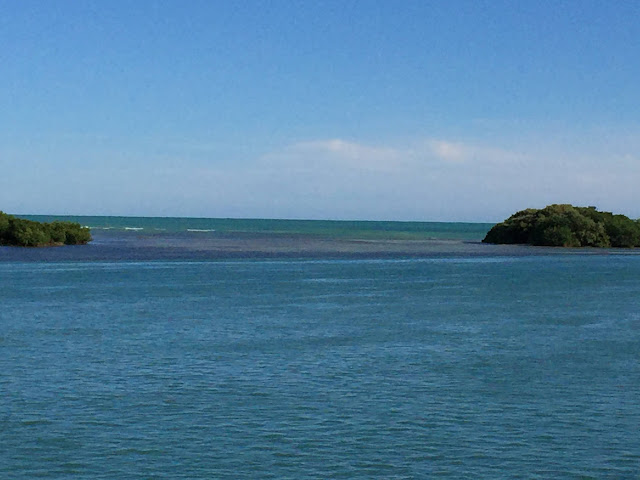 The various islands in the Keys didn't have names until fussy Americans came and settled them. And for most of them that only happened after the railroad arrived. It is said the railroad workers were well paid but homesick and they had a tendency to name the islands after home states they had left behind. The story goes Marathon was so named owing to the marathon task it took to get the line laid to Knight's Key at the western end of what was to become the second city in the Keys (there is no "Marathon Key" by the way). 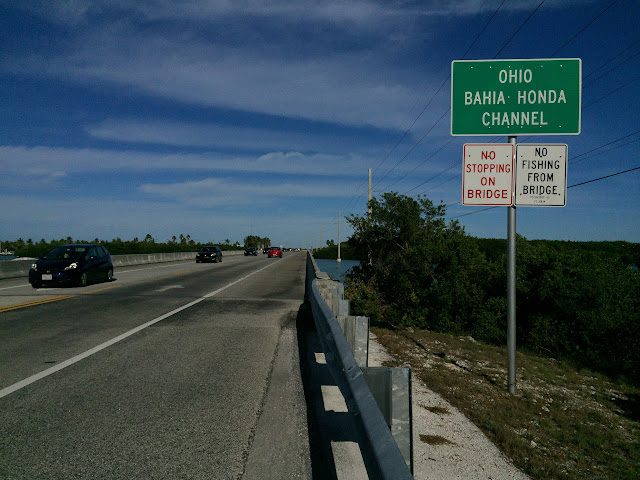 Riding Highway One is on a lot of people's lists but often riding it once is enough. Traffic can be slow and if you aren't confident in your passing skills, and not many are it seems to me, you can be stuck in slow lines of cars all day. Put some guy on a huge bike, have him overload it with stuff, wearing no proper clothing and his feet stuck out in front and you don't exactly have a recipe for fast travel. But there again lots of people would argue that traveling slowly is the charm of the Overseas Highway. I like brisk riding and I find passing to be fun so I amuse myself when I travel as best I can. Be careful though, not everyone pays attention. Several recent deaths found drivers in head on collisions Shen cars crossed the centerline, inexplicably unless they were using their phones. I am always hyper alert driving US One. Every week cars pass coming towards me and take up my lane forcing me on the shoulder on my early morning commute home. 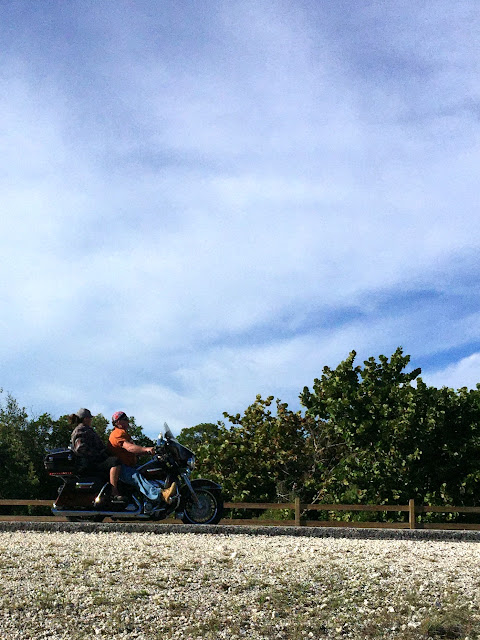 Bahia Honda Bridge helps release he backed up traffic with it's four lanes but we call the south end of the bridge the "Toll Booth' as the Highway Patrol frequently parks there and catches speeders coming off the bridge. Which is why locals slow down suddenly before the corner and visitors speed into the arms of the law. 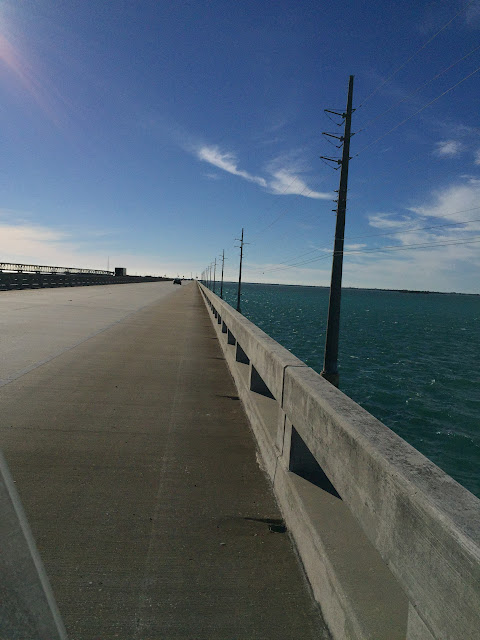 Speeding on the Overseas Highway is not a matter of riding at 80 miles an hour, just a few over the speed limit and not paying attention is enough to get a ticket. But some days the excruciating driving makes you glad to be on two wheels and able to pull free of the death spiral of 40 mile an hour phone booths and wildly waving video cameras. 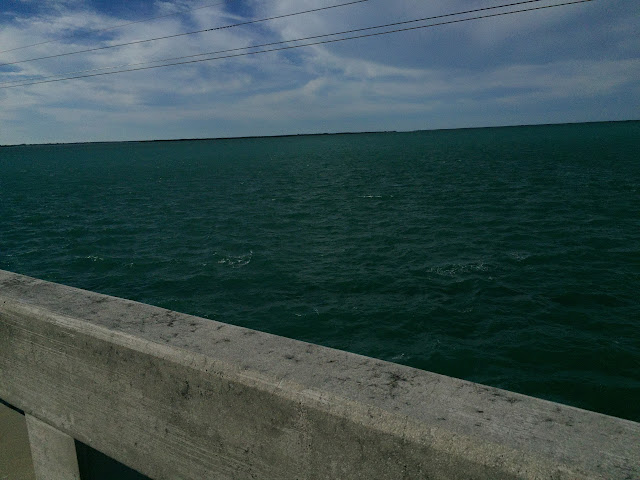 The old Bahia Honda Bridge, spli to allow sailboats to anchor off the state park beach: 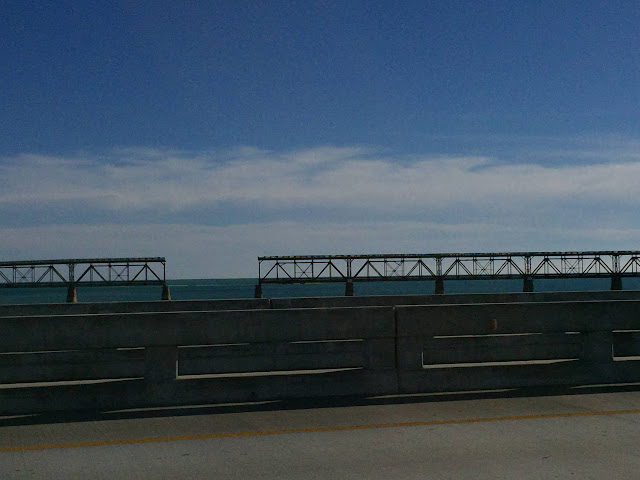 Quite spectacular, in 1938 the road bed was laid on top of the bridge. 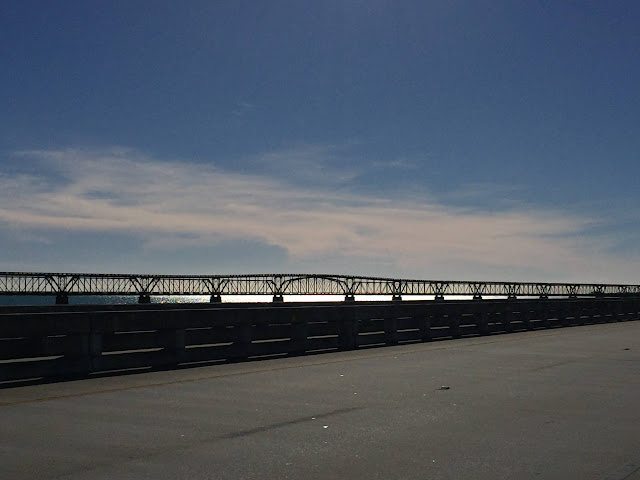 Then you get to Big Pine Key crossing Spanish Harbor Channel, at Mile Marker 33: 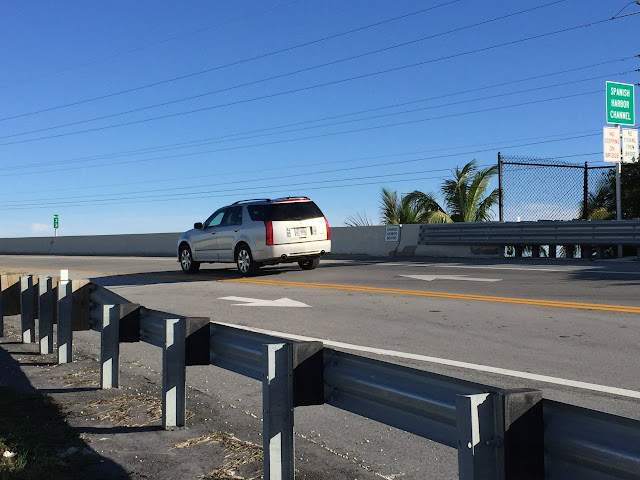 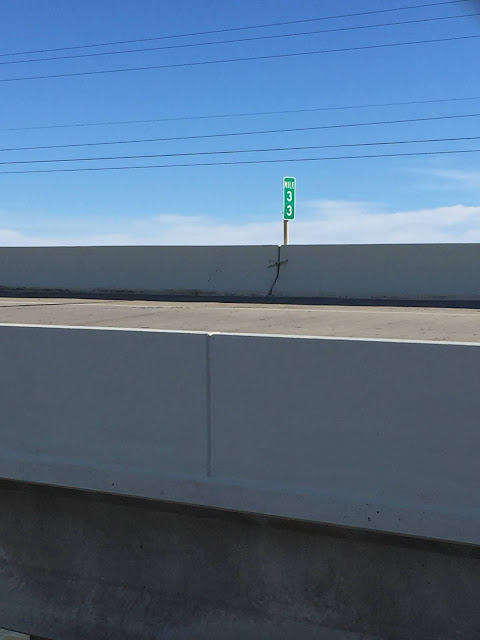 And alongside a resting place for cormorants, the roadway markings still visible on the Old Flagler Bridge. Imagine two trucks meeting on a roadway that narrow: 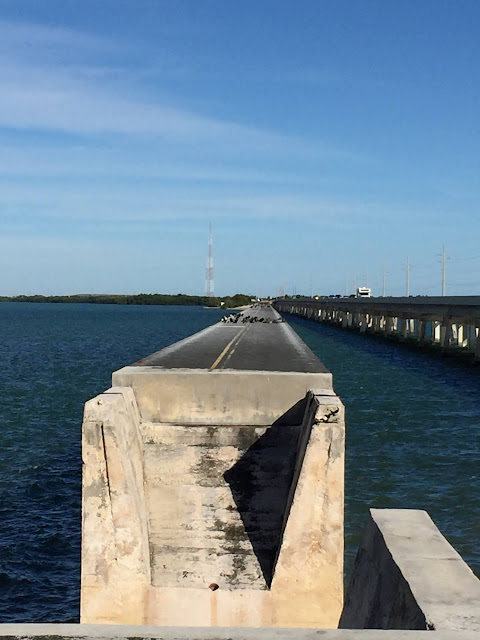 Then there is a thing here that pisses me off and its this stupid deer fence. It works really well and keeps deer off the road absolutely. Great stuff but why do they keep the speed limit down to 45 during the day and 35 at night? 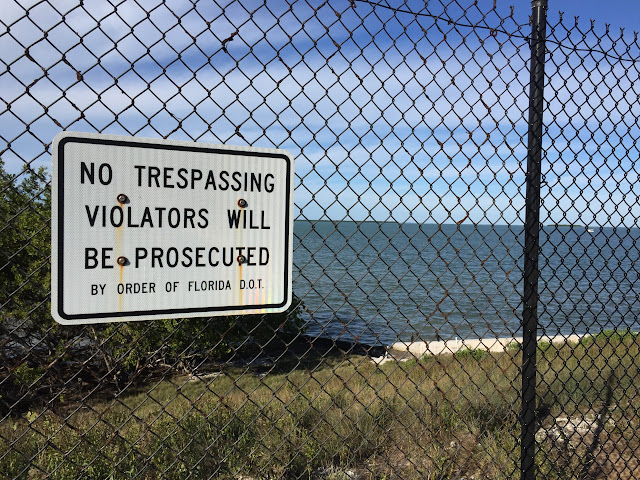 Yes, yes it's deer habitat but they have tunnels under the roadway and there are cow grates to keep them off the main road...and still it's treated as deer roadway. 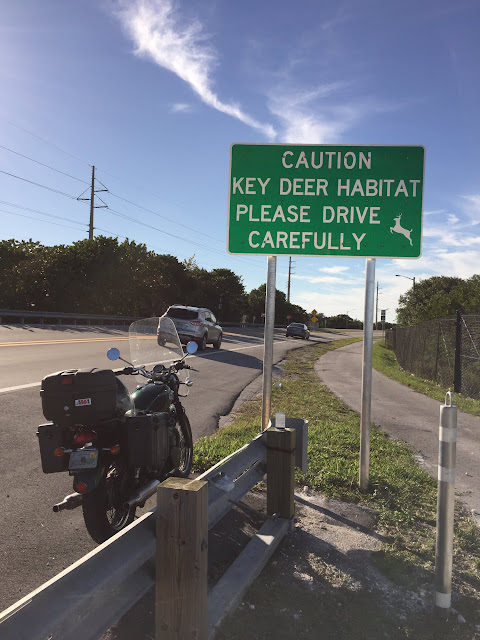 Here is a gratuitous picture of my Bonneville. After 8 years and 90,000 miles it runs perfectly and I still enjoy riding it every day. Great bike. 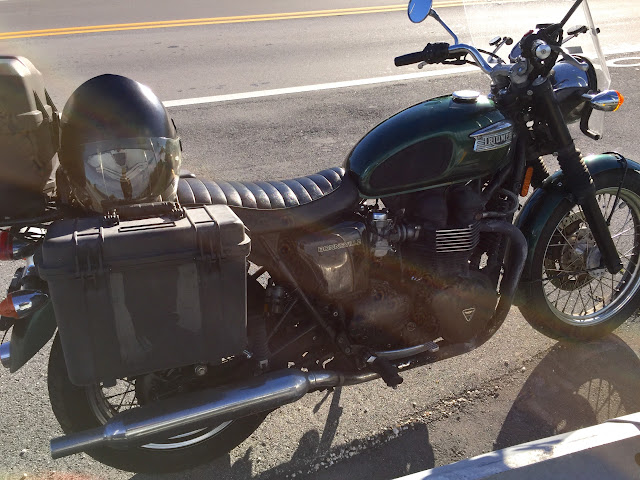 Here are the signs that confuse tourists. Some of them can't tell night from day. If it's light enough to see the 45 mph sign that's the speed limit. As it gets dark the 45 sign disappears miraculously thanks to modern paints and the thirty five will be illuminated by your headlights. If you are smart enough to have turned them on when it gets dark. That problem of no headlights is a rant for another day. 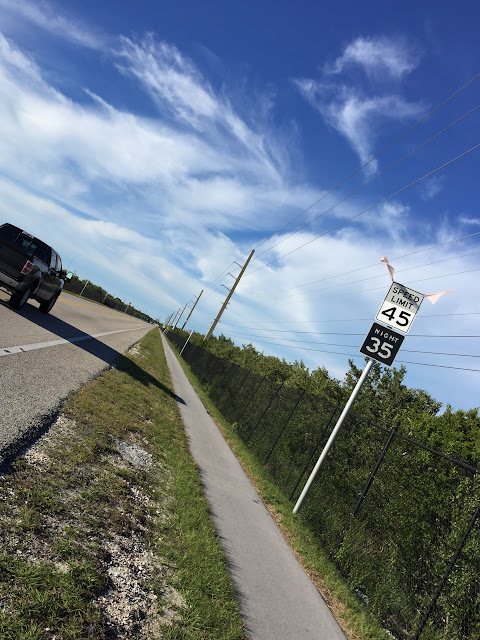 Here in the distance is the 40-foot high Niles Channel Bridge. When I lived on Ramrod Key I crossed it every day to work. The view from the top isn't as broad as you'd expect but people still slow to a crawl on top. 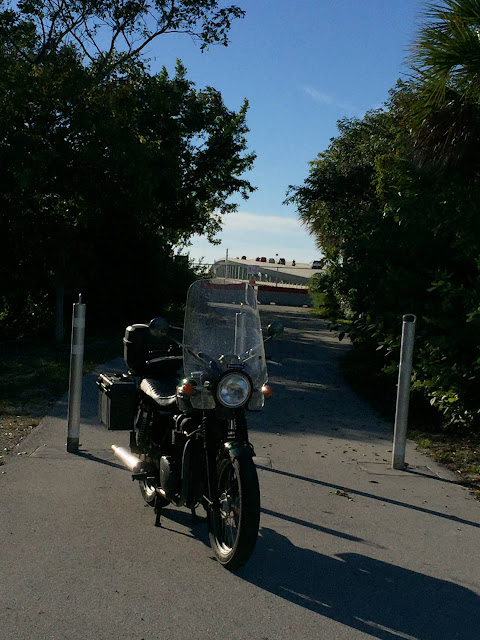 The Old Flagler Bridge is turning to rubble and is closed off. What a waste.I used to walk Cheyenne on it. 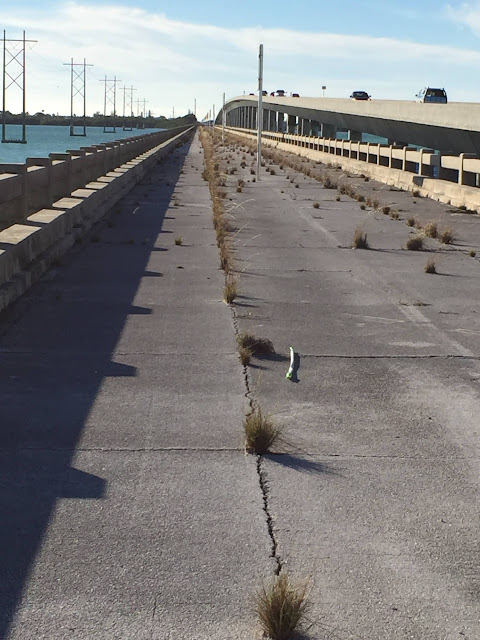 The tallest three bridges on the Overseas Highway are seventy feet above the high tide. Niles is one of the lower high bridges at forty feet. 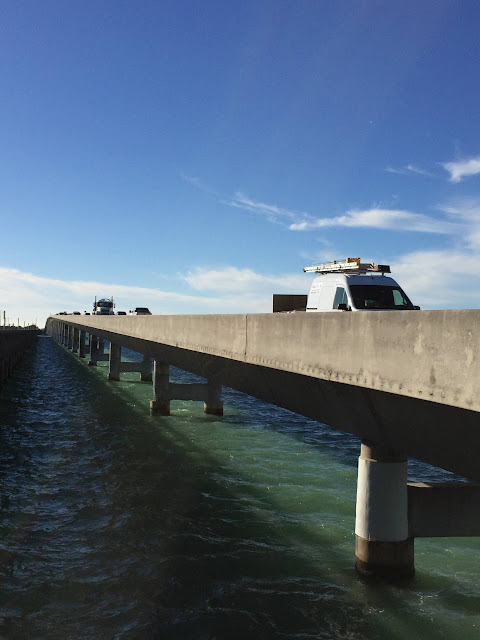 I have no idea if there are in fact 42 bridges between Florida City and Key West, I've never counted them but this very long essay shows a representative sample of what to expect when riding through the fabulous Florida Keys.