Another glorious sunrise but this one was special. Nick and I had a hard week in dispatch together and we were both aching to be gone. We had no overtime scheduled for either of us so we had the prospect of four scheduled days off and we both rocketed out of dispatch the second we were relieved. "See you Tuesday!" he called from the driver's seat of his Volkswagen CC and that was the last of work for a long weekend off. That next weekend is all work is a subject for another day. 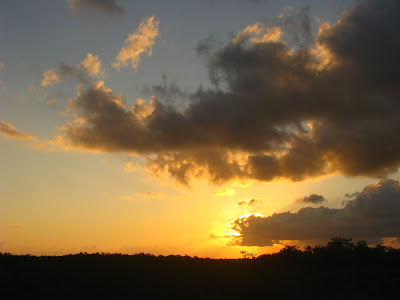 I took Cheyenne to the Pool on Ramrod Key not least because I was tired, Friday night was busy in Key West and I wanted to let her run while I stood still and read the paper. The Pool is actually a failed development that started with planned roads and a canal cut that never went any further happily. Now it's a county park as undeveloped as only a park in the Keys can be. It is perfect when no one is there. 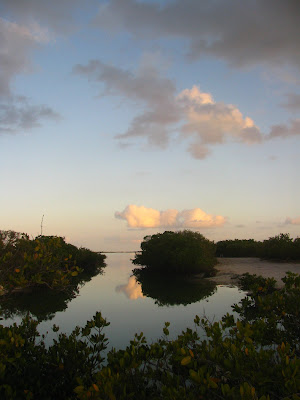 We were not alone. John was out walking his foundling. The story goes that the puppy held up a coconut in his mouth most appealingly as John walked past the pound and he had to have the dog. My Yellow Lab doesn't mind him at all. 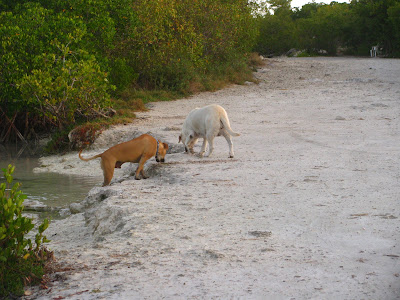 We are different creatures he and I. He's an entrepreneur in electronics who has run his business all his adult life after he learned the trade. Yet we have an outlook in common which surprises me. 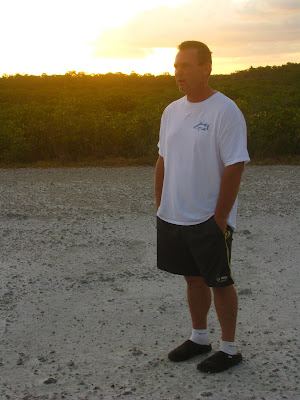 We share a belief in the decency of single payer, not least he with his bad back (he blames excessive motorcycling as a youth) and we prefer the value of small business over the monopoly of corporate America. 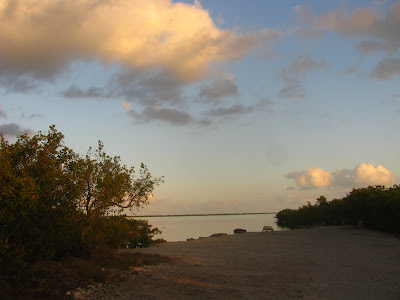 It's an opportunity to meet and share news once every couple of weeks walking our dogs by the shores of the Ramrod Pool. 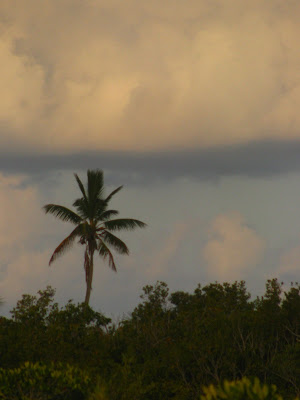 And no matter how grim the news on the financial front there's always a palm on the horizon to help keep things in perspective. We could be freezing our asses off!
Posted by Conchscooter at 9:01 PM 2 comments:

I put eight gallons in the car yesterday at Ramrod Key which is known as a slightly less expensive alternative to key West gasoline, perhaps 25 cents a gallon. I noticed the cost was down to four dollars a gallon even- the nine tenths bullshit doesn't actually fool me, I always round the price up to the nearest while number. Speaking with some Italian tourists in Key West struggling to understand metered parking they touched on the price of gas and I pointed out that unlike Canada and Europe we pay for our own medical care. Fancy a 50,000 dollar co-pay I asked, thinking of my colleague who got that bill from the hospital last month. Their eyes widened. 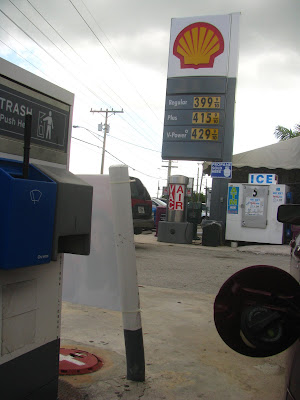 I am waiting for Saudi Arabia to go up in flames. It seems to me they are barely tamping down dissent in their country, paying through the nose to improve conditions but not offer meaningful social change. When Saudi Arabia goes the way of all the other Middle Eastern countries in crisis the world will lose ten percent of oil production. In a bidding war China has three trillion of our dollars they don't need and we have sixteen trillion in up front debt. I'm guessing we aren't going to win any bidding war when oil goes into seriously short supply. We may well look back at four dollar gas with the same affection we remember the buck fifty gas of decades gone by.
Posted by Conchscooter at 12:01 AM 12 comments: