My wife was at the Florida Keys Community College campus running an errand when she saw this  rather fearsome vehicle on campus.﻿ 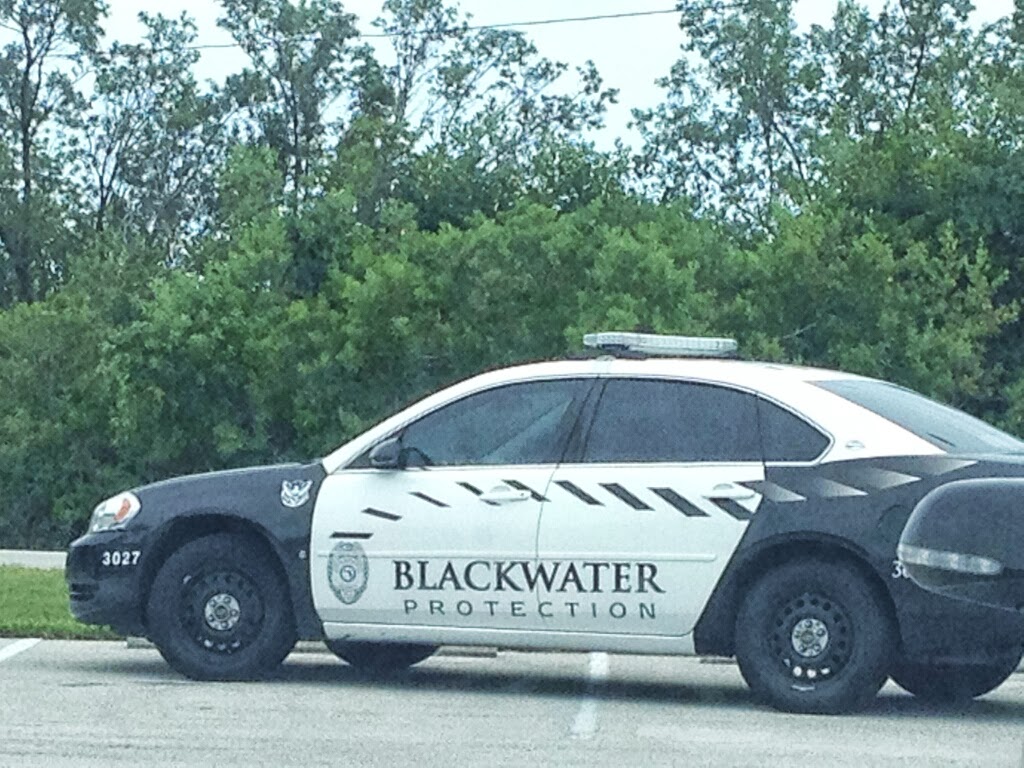 It used to be there was a rather mild mannered security dude in the hut at the entrance to the campus who would make his rounds of the campus. My wife used to work on the college grounds and after hours she found reassurance in the guard keeping an eye out for her when she was working late. Not that she ever felt afraid being alone at FKCC at night. Blackwater? Protection? These are the mercenaries one associates with coups d'état in African dictatorships and nefarious behavior in Iraq at the US government's request. In an age when the National Insecurity Agency seems to think that I should believe that storing my e-mails will keep the country "safe" it should come as no surprise that mercenaries show up on a community college campus in the guise of protection.  I wonder what the Founding Fathers (and their wives) were thinking when they agreed to add the Bill of Rights to the documents they thought a free country needed.
Posted by Conchscooter at 10:00 PM 4 comments:

It was never my desire nor yet my intention to end up in a rather dark dubious place called "Fairyland" but life has a habit of taking peculiar turns and so it was I shrugged off the negative vibe and stepped into the cave so labeled. There was no other way out so I bravely followed my dog underground into the land of faeries. 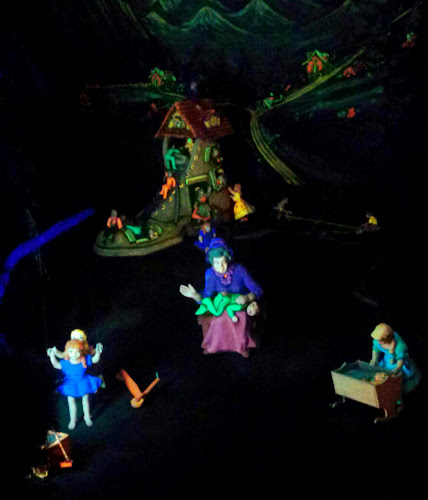 How my wife managed to get me to a place called City of Rocks where I came face to face with the Old Woman who Lived in a  Shoe tableau seen above, is a story that starts with our recent trip to Chattanooga Tennessee. It took us two days of driving, twelve hours on Saturday and just three hours the following Sunday to arrive in the city which sits at the base of Lookout Mountain. The original plan was to ride the train up the side of the mountain but we missed the turn for the lower station and by the time we reached the top we had the rather surreal experience of watching the riders step out of the train into an upscale suburban neighborhood. There was a State Park up the street and there was a rather hazy view but that was all. 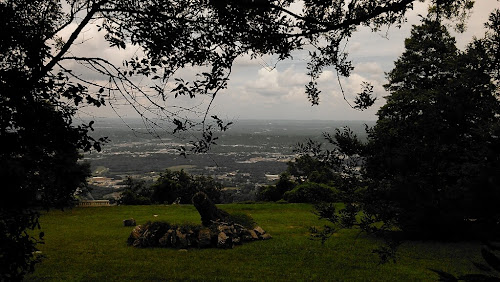 We sat in the car for a moment while my wife studied Trip Adviser and announced finally that we had to go to Rock City. I was glad to be doing something so we ignored the traditional state park, a first in my traveling experience and followed the blue GPS line across the top of Lookout Mountain. 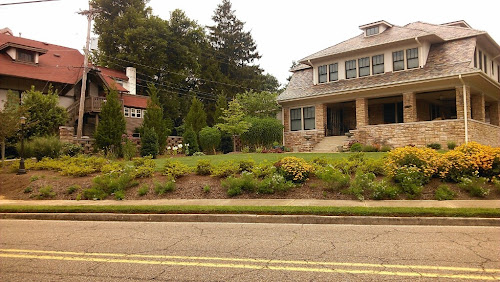 It was a lovely sylvan drive, a winding road dipping through suburbia, going apparently nowhere at a leisurely pace. What we did, without much noticing it, was switch from Tennessee to Georgia though it seems eastern Tennessee remains on eastern time unlike the rest of the state which is in the central time zone. 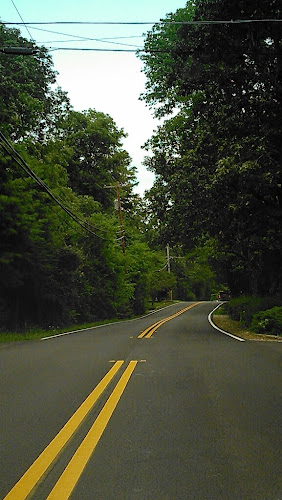 The sign posts were unconventional though clear and like Hansel and Gretel we blindly followed the breadcrumb trail. Rock City? Not  a clue what it was though we were getting an idea how to drive there. 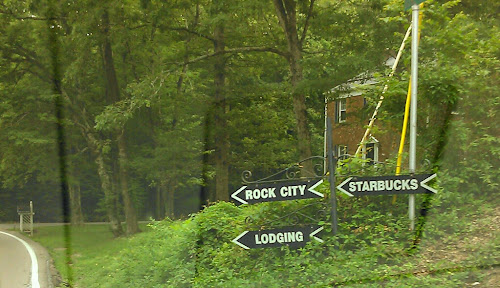 After a fifteen minute meander we arrived at a place that was clearly placed in the 21st century but looked like a roadside attraction from sixty or more years ago. I couldn't wait to see what my wife had scrounged up for our amusement. They assured us our dog was welcome so we parked the car in a vast spacious lot and in we went at a cost I seem to recall of twenty bucks apiece. Cheyenne  was free. 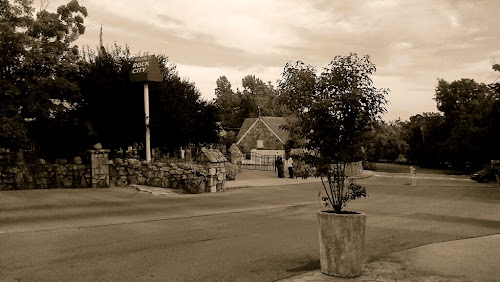 It was an attraction of a similar kind to what one see sat Disney, explicit instructions, a simple map and a fool proof (I think) visitor experience. Rock City presents itself as a unique place and I have to say it is high up on the list of oddities. I looked at the steps and I looked at my portly middle aged Labrador and I wondered...but off she went, like a rocket, frightening a couple of dog phobic visitors into stepping aside. I mumbled my apologies but Cheyenne was intent on getting through it. I came to suspect she might be a bit claustrophobic, a sensibility I would never have attributed to her. 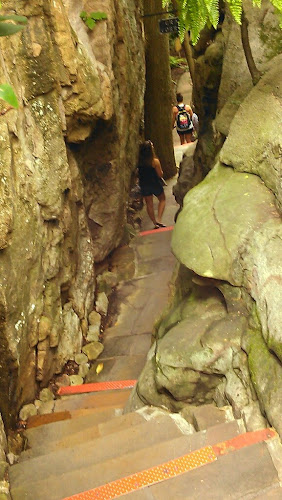 At first I thought the notion of staying IN the trail to be rather ungrammatical but it was borne in on  me that the sign was supposed to be taken literally. 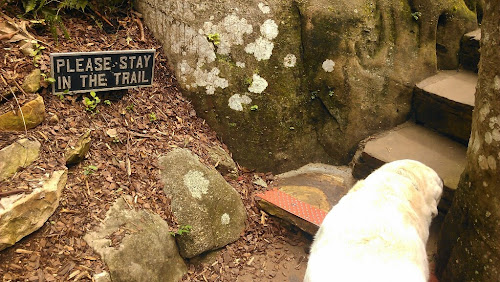 Sometimes we had no choice, on the thirty minute scramble to the end of the magnificent overlook at trail's end. 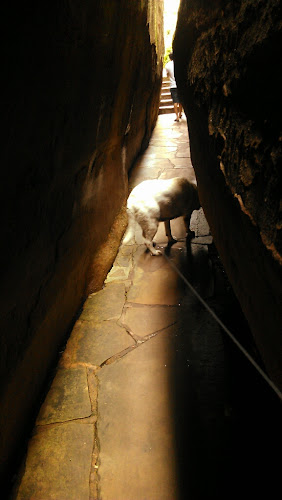 Other times Cheyenne seemed to be rather too curious about what was going on outside the perfectly manicured trail. 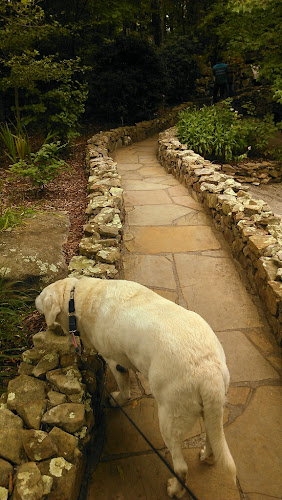 And as usual she found a cooling bath that also served as a refreshment stop for her. A walker who passed us in a wide spot on the trail expressed surprise at seeing our dog. "Do they allow them?" he asked wistfully, mentioning his dog left at home for this trip."Well," I said, "Its pretty much impossible to sneak a  104 pound Labrador anywhere.". 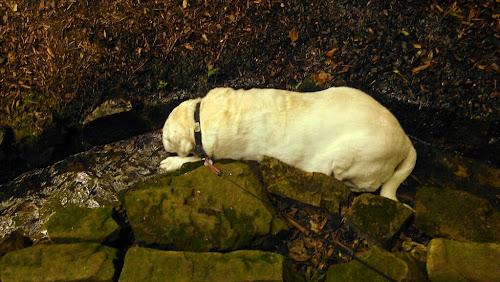 According to the literature a couple of missionaries on a journey to convert the heathen found this place in 1823 and described the jumble of rocks as resembling a city. Hence the name that stuck. 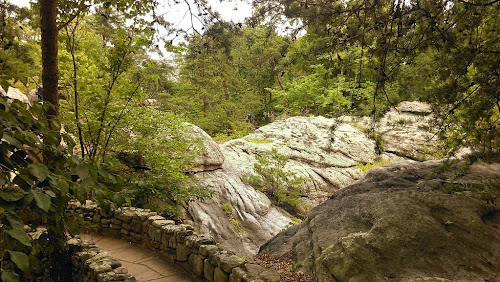 Since then they've provided a fair bit of work to stone masons to create the very elaborate trail. 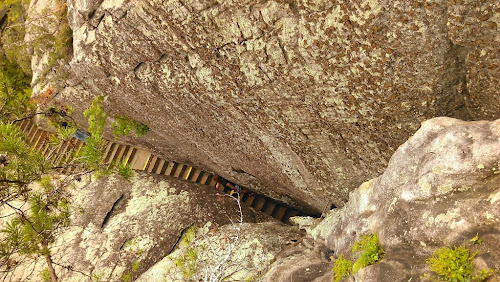 A trail yes, but there are also many natural clefts in the rock: 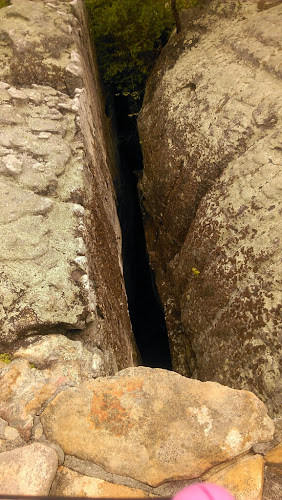 My wife is no great fan of suspension foot bridges though she's done a few over the years of mad exploration with me.  Grandfather Mountain in North Carolina comes to mind, as do several rather rickety zip lines in Nicaragua and Costa Rica, but I could see no way to get Cheyenne easily across the void in one piece. Fortunately there was a more solid if no less extravagant rock bridge built in a series of impressive arches for the less fleet of foot. 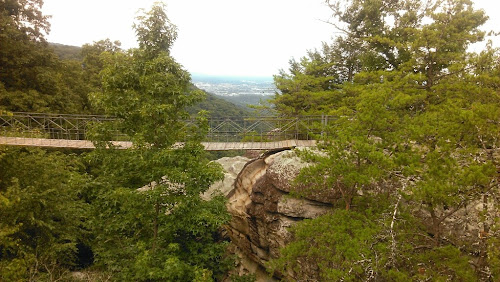 For some youngsters vertical pathways presented a more interesting challenge. 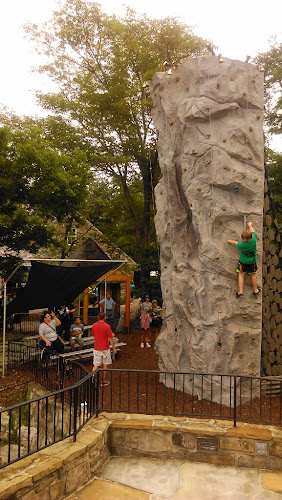 And here was our reward, a view across they claim seven states, though that claim has been rather tartly refuted on line by the corollary that the claim is "unfounded." Impossible seems more like it, but one doesn't want to be rude. Beyond that disputed claim there wasn't much to see, a collection of rolling woods and a town rather indistinct far below. 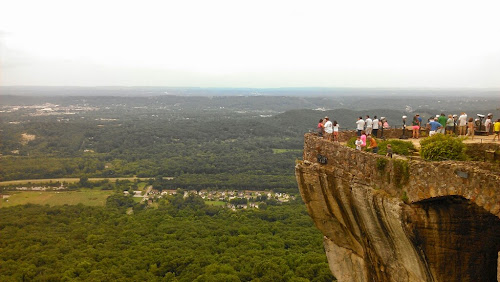 It was nevertheless an impressive collection of paths, buttresses, viewing points and overlooks. 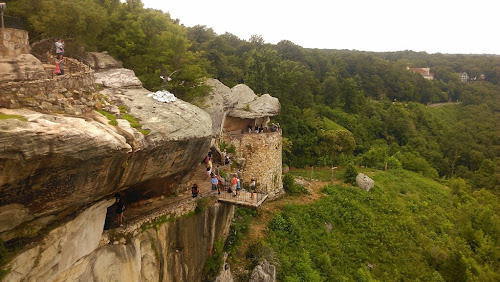 From the platform seen above one could view this human-made waterfall shown here below: 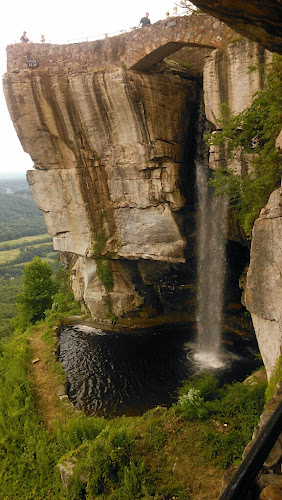 Aside from the need to create human attractions, a preposterous gnome garden and weird structures welded into place in an effort to amuse the masses, the place had its own natural grandeur and it was, I have to say, a shame to see it bent to the needs of crass commerce. 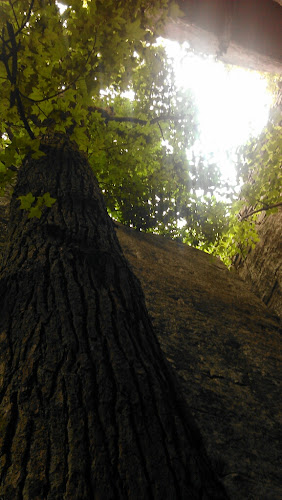 We wound our way back to the start, a mile long walk they say and there we were almost out yet obliged to go through Fairyland where small children admired, with loud squeals, the assorted tableaux of traditional, to my surprise, children's stories. Here: little red riding hood, set in a  cave off the main trail.. 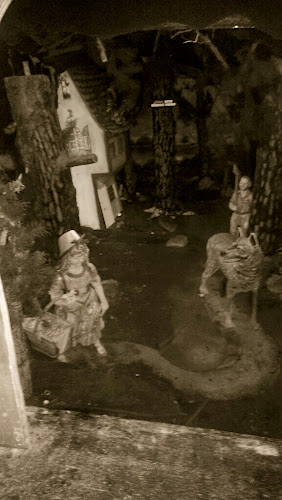 These oddities are the sort of attractions you have to seek out when on vacation. Its a bit like the worlds largest ball of twine, or Cadillacs planted in the desert. What Nature provides sometimes has to be improved upon. I could imagine coming up here some bright midweek winter's day and exploring the trails and enjoying the views alone and it could be quite the mystical experience. On a 90 degree day shepherding a surprisingly enthusiastic Labrador down the trail was an experience of a different magnitude.

We sat at the Starbucks for a while and refreshed ourselves. Cheyenne had a bowl with us and we watched the world go by. It was a pleasant moment as southern strangers made cheerful conversation and we slipped into the moment, almost without trying. As we gathered ourselves up to leave this monument to Georgia's natural beauty we spotted an electric car plug in station. It reminded me that sophisticated urbane Key West recently rejected the notion of buying electric cars for parking control saying the city lacked the infrastructure to recharge them. Here it is: 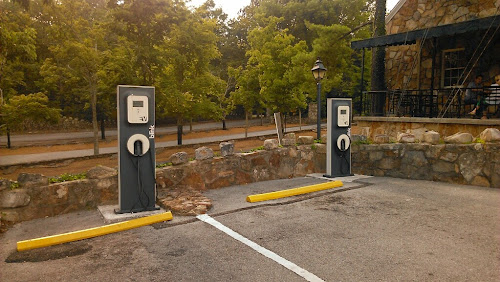 Not that complicated surely?  And here it is at Rock City of all places showing us how it's done.