In late January 2000 my wife, myself and two large dogs were living at anchor off the beach at Isla Mujeres in Mexico. We had sailed up the coast of Central America from the Panama Canal, exploring the buggy islands off Nicaragua's Caribbean coast and comparing them  unfavorably with the granite rocks that litter Panama's Pacific Coast where we had found ourselves six months before. 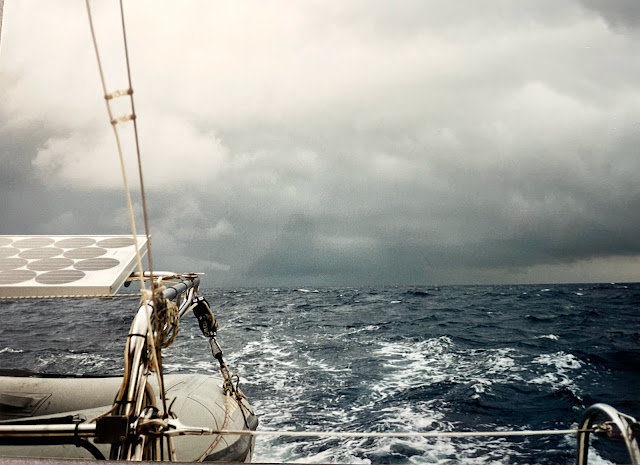 Our goal was to arrive in Key West before the money ran out completely, the money we had spent getting there from San Francisco. I think we left California with around $15,000 and a well found Gemini catamaran but our run up the Caribbean was a race against insolvency so we had to move more than we wanted to, as we didn't want to finish a two year cruise on bread and water. I drank a lot of tea off watch, which isn't free. 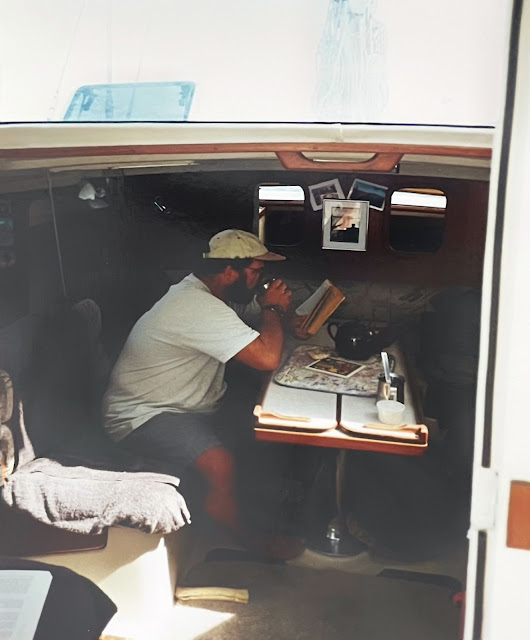 The sail from the Cancun area is three hundred and thirty miles to Key West and  is a complicated bit of water. It requires crossing the Gulf Stream, dealing with winter storms that blow the stream into piles of very uncomfortable waves, while not washing up into Cuba which was not a friendly destination that year. We watched the weather and pondered our chances. 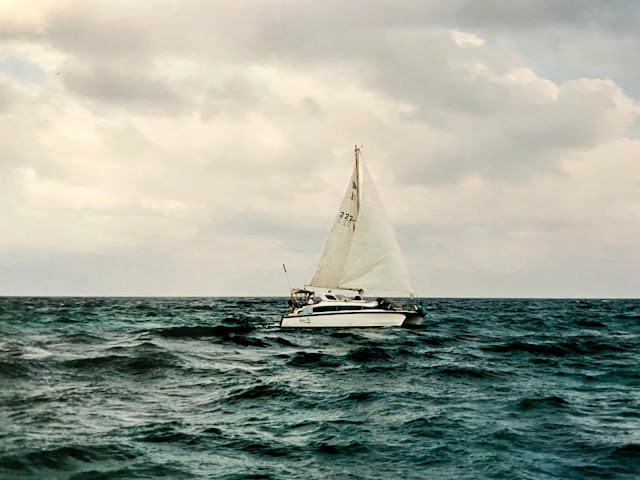 They weren't great and things got a bit messy. We sailed accidentally in a  group with two other catamarans, most likely because each of us independently saw a decent weather window and we cleared out of Mexico at the same time. A 330 mile passage at an average 6 knots, hoping for a boost from the Gulf Stream would take more than two days. Finally we left of an evening and it was dark when we cleared the reef and settled down to a course as due east as we could against the wind. I was ready to arrive in Key West and rest. Our plan was to stop for a couple of years, make some money and then tour the Caribbean before settling down for a bit longer. It was obvious the current cruise was over so I wanted to start work on the next one, never imagining I would be leaving Key West 21 years later...in a van no less. 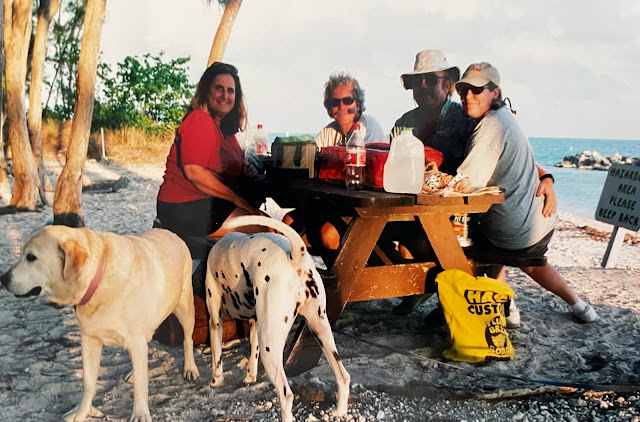 The storm blew up when we were still fifty miles southwest of the Dry Tortugas. Our loosely knit group split with Tom heaving to, stopping in place with his huge catamaran while us four on our smaller machines decided to run downwind and get out of the Gulf Stream slammers that were making life miserable. I wanted  to arrive in Key West but not like this. Perhaps we should have stopped in place like Tom but our decision to spin off downwind with Dennis on his Gemini sent us on a real adventure and it was all to the good. 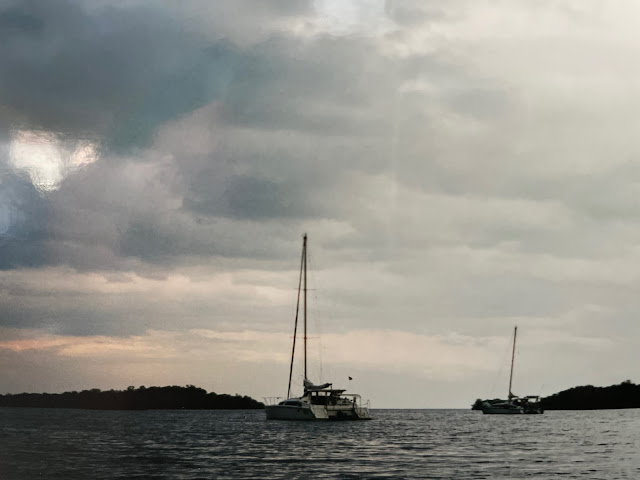 The storm blew us into Cuba into a  vast bay filled with mangrove islands into which we ducked. We had no desire to go ashore officially as Cubans take a dim view of unexpected arrivals in towns not equipped to process strange boats. They might have kept us onboard in a harbor making life hard for the dogs and difficult for us trying to explain to Debs and Emma why they couldn't go for a walk on land. So we anchored among the mangroves and waited out the storm. Our boats were very shallow, drawing 18 inches and David taught me to enjoy sailing in two feet of water as we drifted like dinghies through the channel and reefs watching the thinnest of water slipping under our hulls. It was hair rising for cautious old me but I learned to love it as we picked our way through water that wouldn't cover our knees were we to walk in it. Of Cubans we met a few fishermen and bought all they had to sell: lobster tails. We feasted on lobster till we were sick of it. 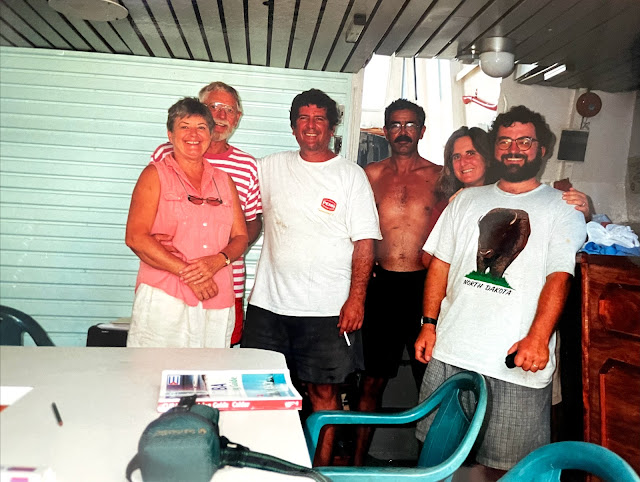 Captain Ray and Rodolfo entertaining Arlyce, Dennis Layne and I
There was a lovely beach nearby and we sailed out to it and spent an afternoon in the sand, apparently far from civilization until a naked man came round the corner and startled our dogs, middle class creatures not used to men with dangling appendages walking into them. They barked, the French vacationer swore at us colorfully and with proper Gallic hauteur and we hastily got back aboard out of range of any Cuban authorities likely to be sent to investigate. A scrubby security guard duly appeared but we were sailing out into the bay and he was powerless to interrogate us. The nudist colony of Punta Jutia was secure once again and our dogs were tired from their exertions. We sailed for Key West. 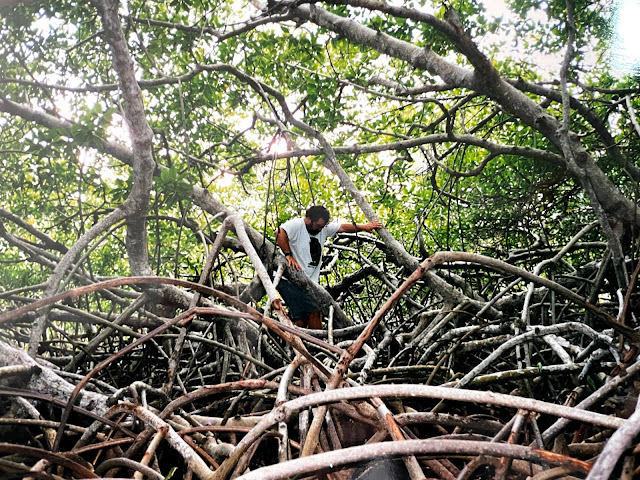 The weather was perfect, and we sailed through the afternoon pointing north with the wind conveniently behind us and the current dragging us toward Florida. 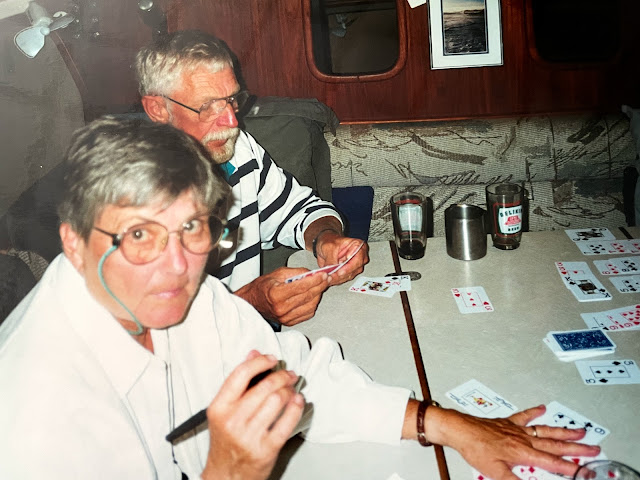 Throughout our journey we had developed a technique for landing in foreign countries which went like this. On approach we would scout out a quiet bay with a beach out of sight of whatever community there might be ahead. There we would spend an evening prior to our official arrival walking the dogs and enjoying land for a while. In the morning the dogs would get a pleasant spell ashore and then with ourselves, the dogs and the boat washed and cleaned we would sail smartly to the customs post in the next town, arrive at lunch time and present ourselves for check in with sleepy exercised dogs on board. 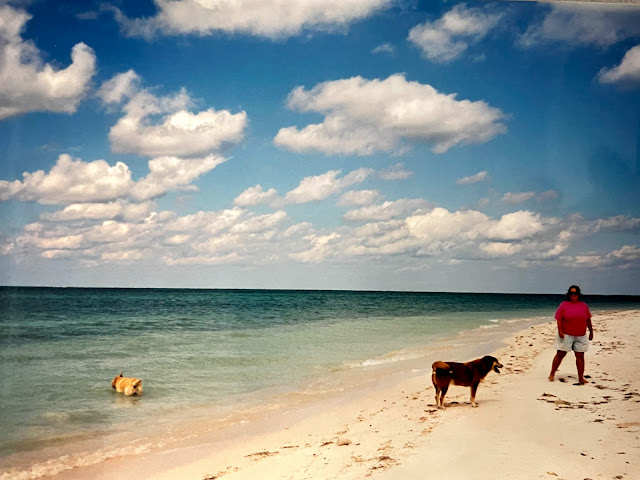 My plan was to do the same in Key West. At first I thought of stopping at Sand Key, familiar to me as a large arc of sand under the old lighthouse seven miles from Key West. By the time we were sailing up the channel at dusk and Sand key Light came up close I realized my memory of a broad arc of sand was reduced to a handkerchief.  We pressed on, drifting in to Key West harbor after dark. I knew where I wanted to go and we anchored off Christmas Tree Island, more properly known as Wisteria, named for the ship whose remains lie to the west of the little island. 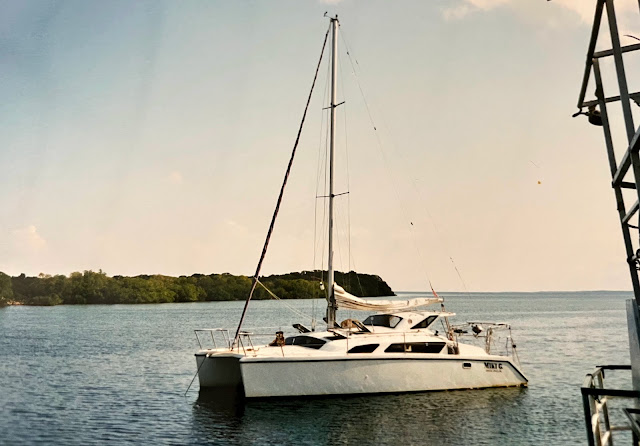 I dropped the dinghy into the water and the dogs ran swiftly down the steps into the rubber raft. I am a pansy so I had a small outboard to propel the clumsy Caribe through the water and we pushed up onto the pebbly beach. The dogs jumped out and wandered up the beach. I tied the dinghy off to a large piece of wood and walked toward a bonfire. 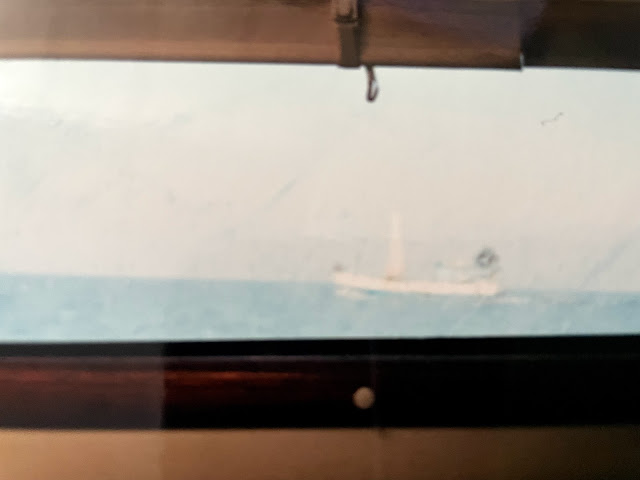 He nodded to me as I stood in the light of the flames. He looked up weighing me and the quality of my character as I watched the flames and listened to Debs and Emma scratching the pebble sin search of the exact right spot to pee. Wanna beer? he said. We manly men stood and watched the flames together. 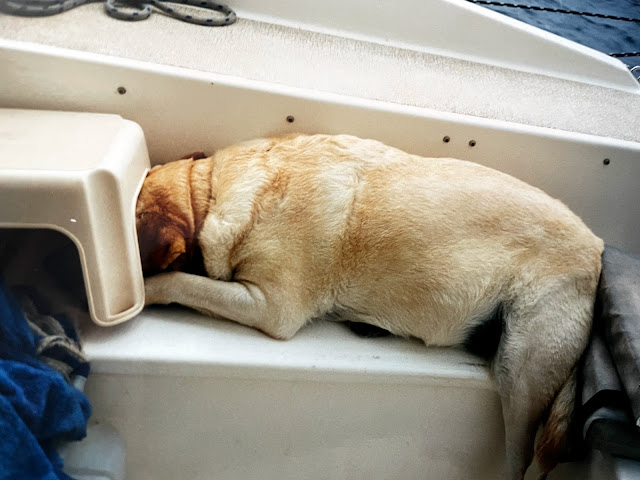 Across the water I could see the cabin window illuminated as Layne sorted dinner out for the dogs and for us. The sky was a deep dark blue and anchor lights were appearing around the anchorage. Where you from? he asked with another grunt. Mexico I replied unwilling to list my illegal foray to Cuba. Nice trip he said. Welcome to Key West. I drank some beer and then the struggles of wind and wave and storm and the uncertainty of smuggling myself where I was not wanted, all of that nonsense fell away. The naked guy at Punta Jutia became a metaphor for vulnerability, not a threat. 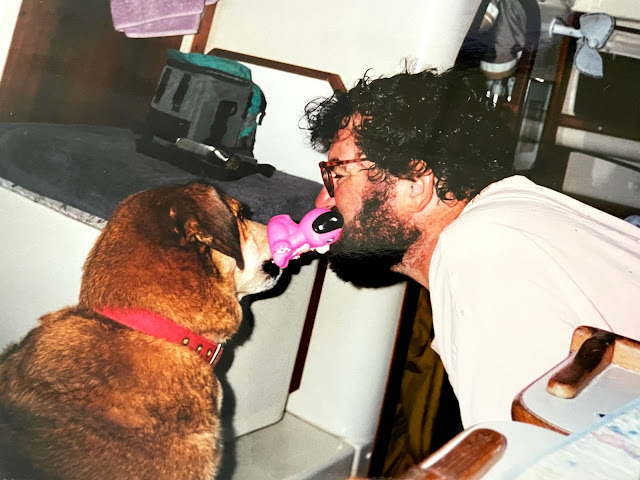 Thank you I said. The silence persisted. A wet snout nuzzled my empty hand. The peeing was done and it was time for dinner. We had arrived. 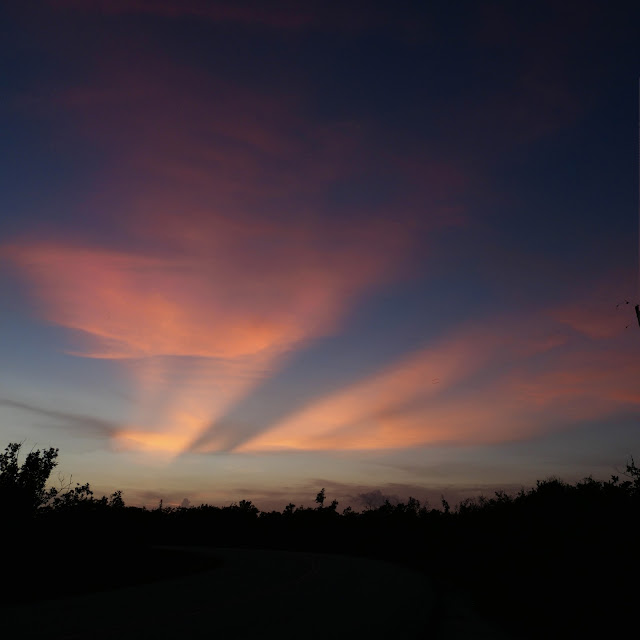