Webb Chiles is a remarkable man now busy sailing the Pacific in an entirely unsuitable boat, a Moore 24. He has a history of being unsuitable, sailing an open boat most of the way around the world, trying to commit suicide by sinking his boat and changing his mind -too late! - and thus struggling to survive. Too often these days we find ourselves reading people doing silly things and justifying them as being the best thing anyone could do with their lives. I prefer people who travel for pleasure, for the challenge not as a fundraiser to increase "awareness." I like the unvarnished truth, not jollity in praise of the improbable. If you read my blog you know my Key West is unlike anybody else's, warts and all. Treasure Webb Chiles and his legendary sailing:

self-portrait in the present sea journal: Neaifu, Tonga: pounded: A distressing trend has emerged from my immediate post-passage entries. Instead of reporting how great the sail, I repo... 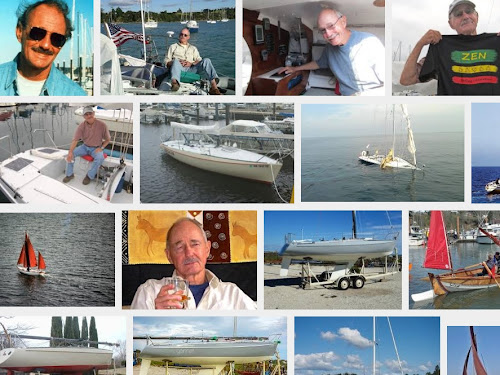 Posted with Blogsy
Posted by Conchscooter at 9:00 PM 4 comments: 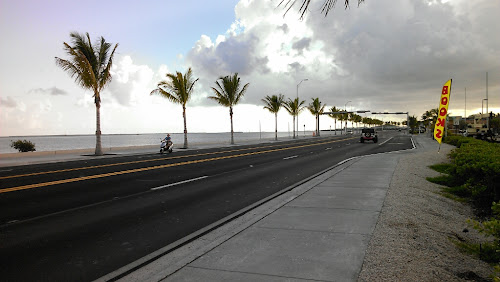 Today is supposed to be the day that the bigwigs come to town and open the Boulevard officially, a couple of weeks past the due date. It's hard to imagine that traffic will be back to normal, whatever that is, after two long years of chaos on the main road into Key West. 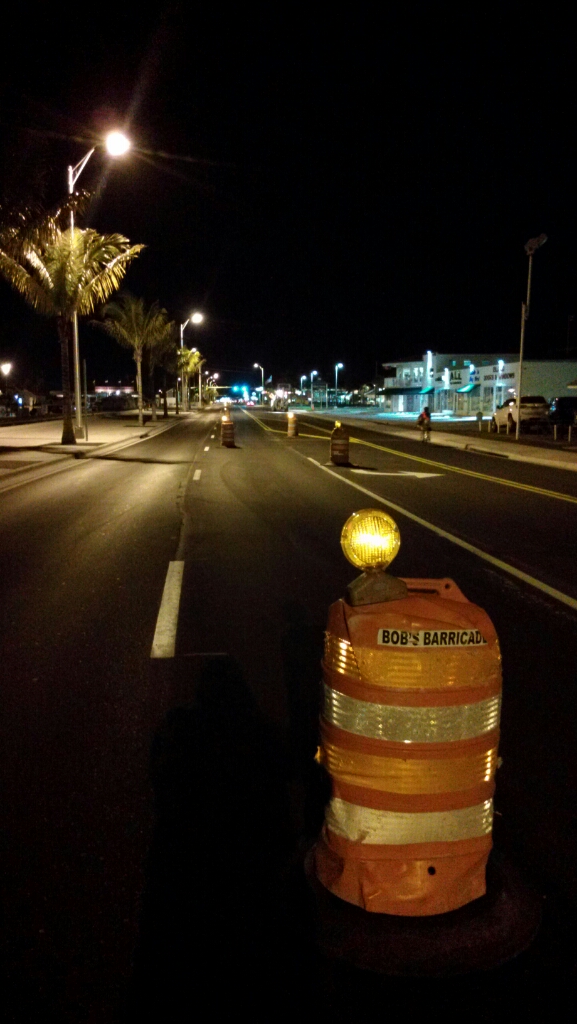 The $45 million dollar construction job has been a nightmare for all concerned, principally the business community that has lamented the loss of business as the four lane road has been torn up and rendered into a version of a nightmare ride into the city. For a while the Boulevard was two lanes inbound only rushing traffic past the stores that line the state highway for two long dusty miles. Then the business community protested and they changed the format into one inbound and the other outbound, which seemed a lame idea to me but it actually did okay. Nothing has been great about this street since they started tearing it up but the work did have to get done. 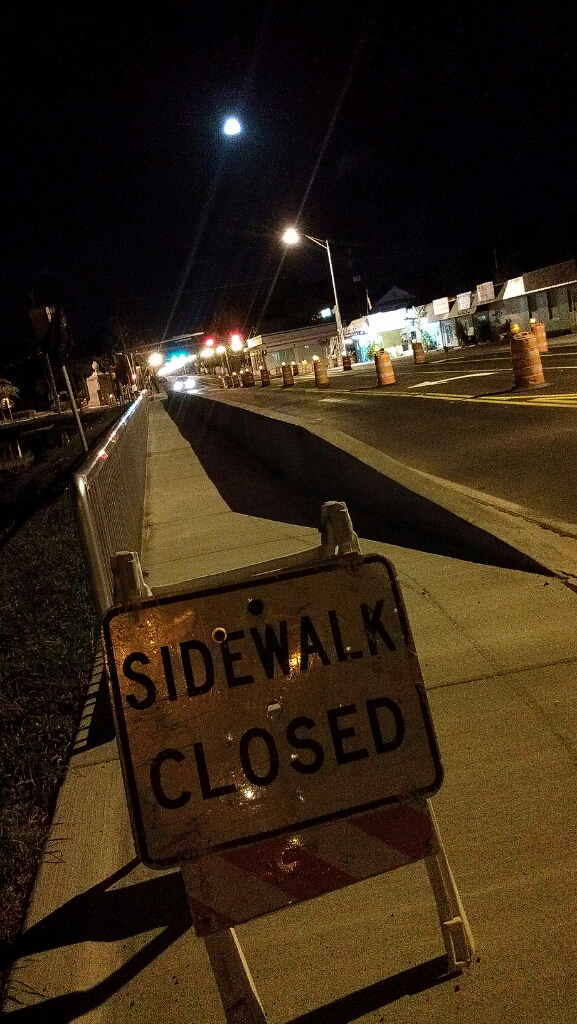 Flooding has been the problem, not climate change induced flooding though higher tides won't help. Heavy rains reduced the road to two lanes, and the weird camber of the old road forced huge lakes to form all along the edges. The renovation has supposedly installed new high powered storm drains to remove the water: we shall see. The bike path/sidewalk has been rebuilt and the state was restrained from ruining the view by not installing the world's ugliest aluminum railings. However the high maintenance coconut palms are back by popular demand. The plans had called for low maintenance, native palmettos and thatch palms but that wouldn't do for the peanut gallery... 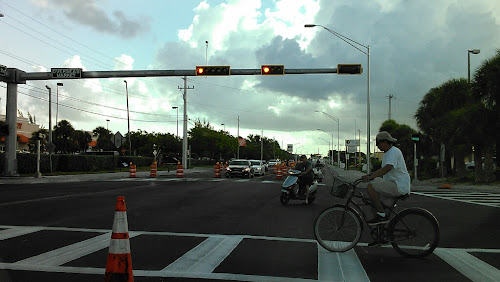 The de Moya company that won the contract have been utterly gruesome to our little city. They have much larger contracts on the mainland so after they won this modest bid they tore up the entire road and buggered off leaving the city with a wrecked road for about four months. Finally city officials contacted the state department of Transportation and some ineffectual representative from Tallahassee came to town to lament with the city leaders and eventually the bozos from Up North got back in gear again, not before a few businesses closed their doors. 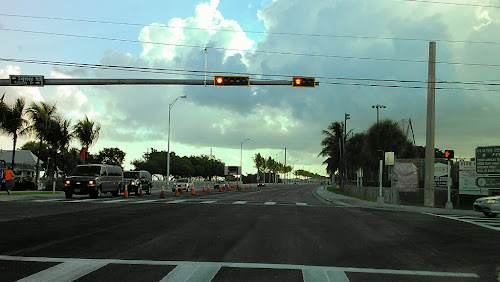 Lately of course the construction company has made a perfect nuisance of themselves frantically trying to complete the contract in order to win a bonus and i certainly hope they missed that deadline. However knowing how the good old boy network operates I don't doubt they will be rewarded for the chaos they have brought us. What's worse is they tore up the entire road all at once and kept it all torn up all the time. They never finished one piece of it and then moved on to the next bit. The whole thing was a shambles from beginning to end. I hope they never come back to the Keys. 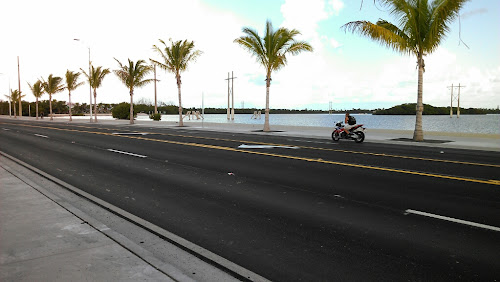 There is also going to be one more set of lights at Searstown, but the engineers told me that if traffic flows at the speed limit the lights will be in sequence. Fat chance, as Key West specializes in wasting time at red lights with no cross traffic. 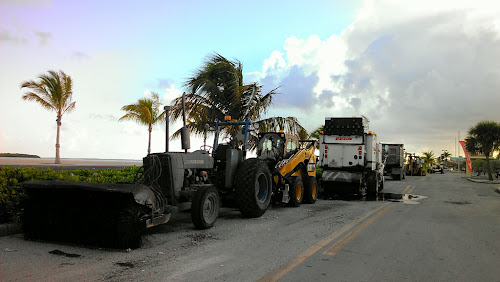 Honestly, my hope is most traffic will return to The Boulevard next week returning Flagler and South Roosevelt to the bucolic emptiness I remember so fondly. 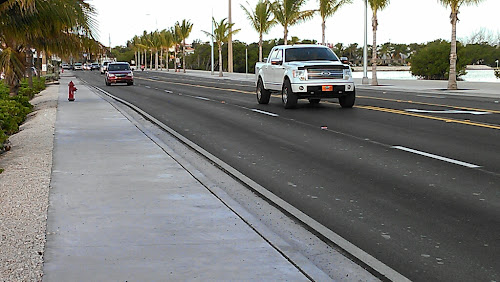 At night the absence of traffic is a lovely thing, another reason I enjoy working nights ( parking my motorcycle out of the sunlight is another...): 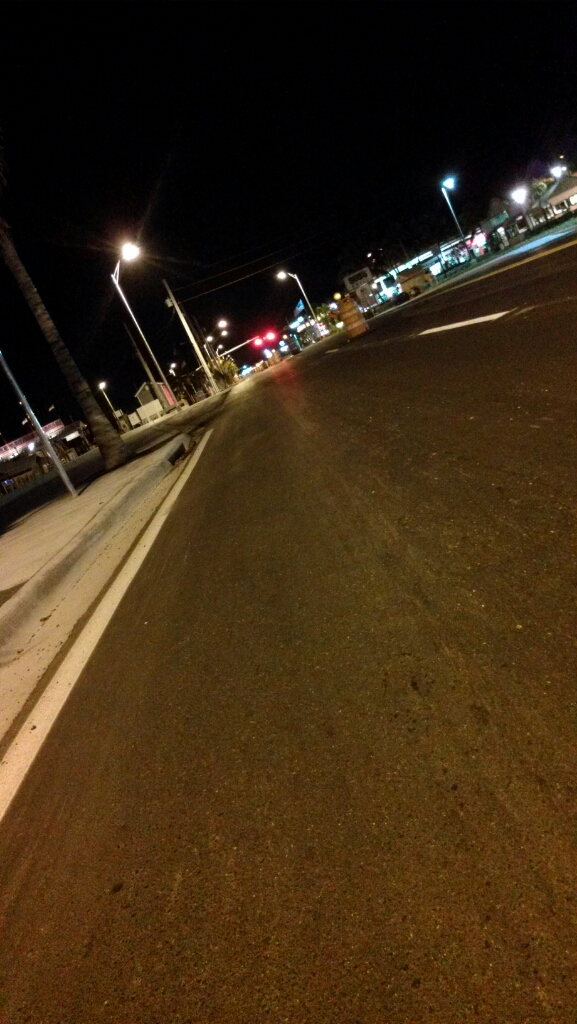 Already the new Boulevard is backing traffic up of course: 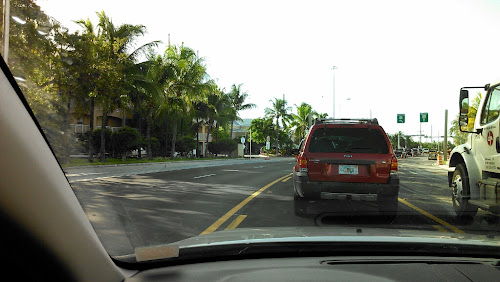 And waiting endlessly at traffic lights with no cross traffic is back! 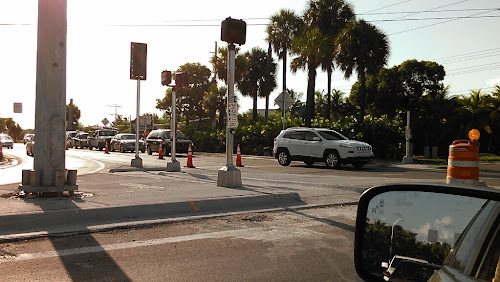 In winter it will get worse of course but I will be happily buzzing down Flagler at speed limit plus five. Everyone else I hope will marvel at the billiard table smoothness if the flood-free North Roosevelt Boulevard, where hardly anyone knows how to use the median lane to make turns without blocking traffic while integrating into the flowing traffic. 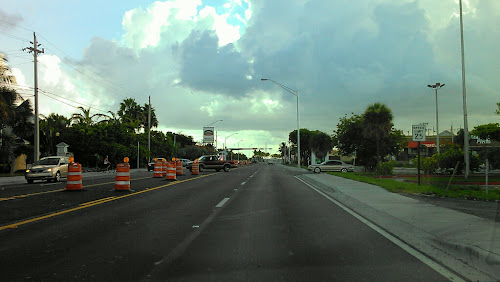 Bearing in mind the tourist attractions in Key West are to the left in the picture below, and the sole entrance to the island is the bridge on the right, the importance of North Roosevelt becomes obvious. That it is lined with businesses that are less tourist oriented but vital for locals adds to that sense that this project took too damned long. 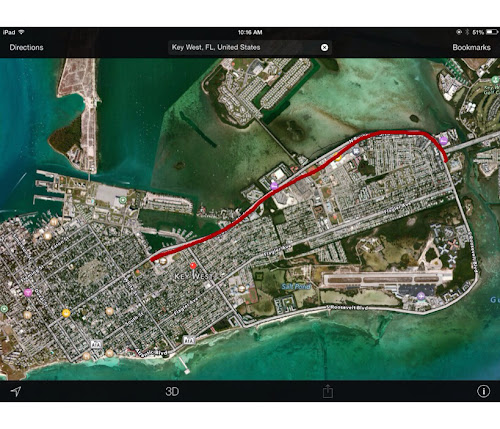 But now it's over, they say and everything gets back to normal. That this job worked we'll know after heavy rain with no flooding. Ho hum. We'll see.