An Afternoon In Raleigh

I completed my Shark Tank audition by noon and found myself in an unknown city's downtown on a muggy overcast Friday afternoon. I checked my invaluable phone and I found an old time diner which looked like my kind of place. I did manage to get lost once following the arrows on the screen, but that's nothing for this world girdling globe trotter. I sorted it out. 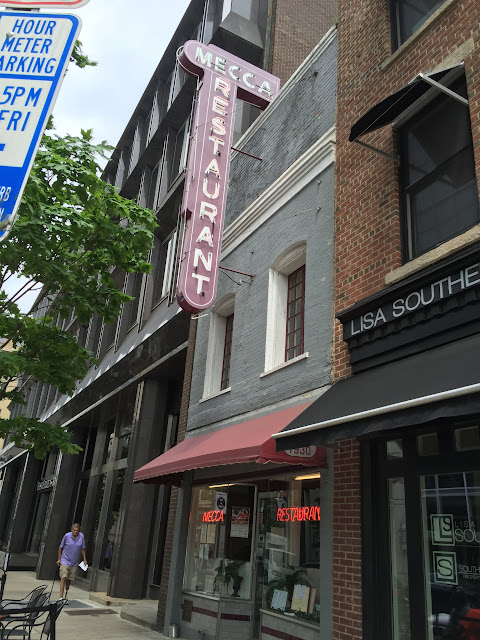 It was dark and cool inside and I took a spot at the counter. My neighbor had a plate of spaghetti bolognese straight out of a 1950s cookbook, white pasta with a sauce more closely resembling chili, so I figured simple and straightforward was the way  to go. So I ordered friend trout "fresh from the ocean" which I pondered for a bit. Maybe they brought trout from the sea to this inland location. Fish on one side, fried eggplant on the other, mac and cheese in between for nine bucks. 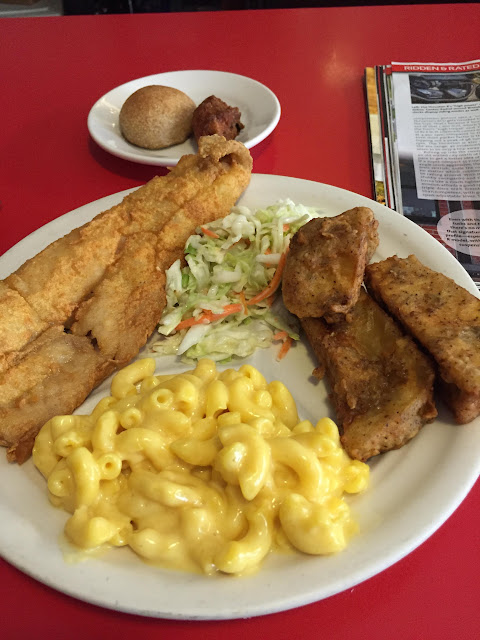 I was alone on this trip so I was a devil and had blueberry cobbler with ice cream which went with the decor and ambiance of this place. I expected Sam Spade to climb out of one of the booths behind me, or hear a debate between Raymond Chandler and Dashiell Hammett. 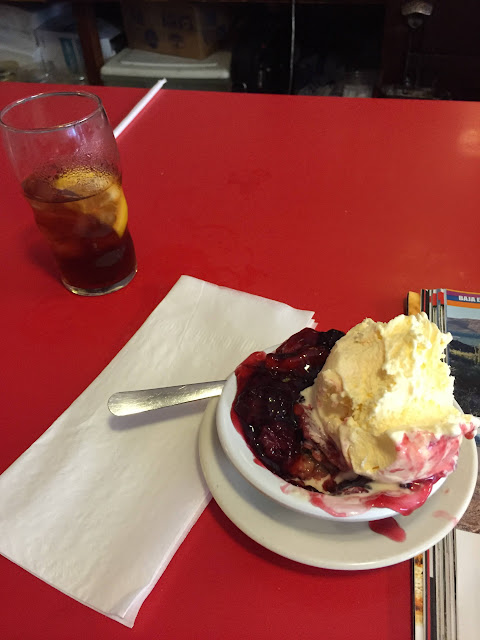 I sometimes hear from people tat they don't need a smartphone and i guess  they don't if they don't leave home. I find mine invaluable and it has changed my life for the better. I love how I can look for whatever I need with a  click of the map icon.  Need lunch? Click, study the choices and get directions. Easy. I could read a book during lunch, or check the front page of the Citizen, find out the history of the Mecca...The short version being a couple of Greek immigrants opened the place in 1930 and it has flourished ever since. 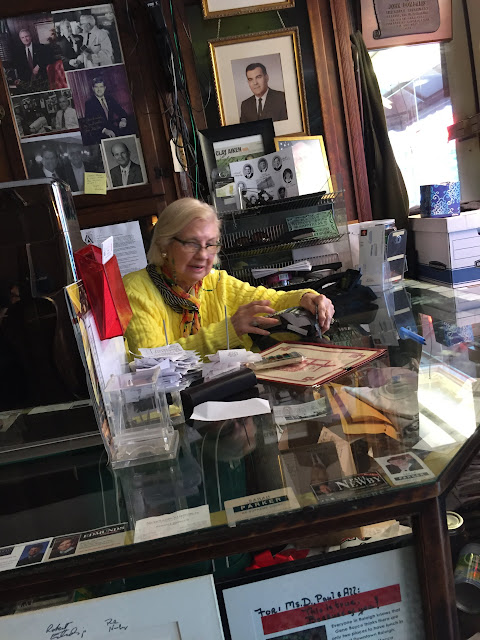 If I have this right the lady staffing the old fashioned till and helping out at the counter is the wife of the eldest son of the founders and her name would be Floye. I can't begin to imagine her dedication and though she scared me a bit she was actually really cheerful and charming, concerned mostly by the fact the day was Friday 13th. I'd have gone back to the Mecca for dinner, except I had a plane to catch. 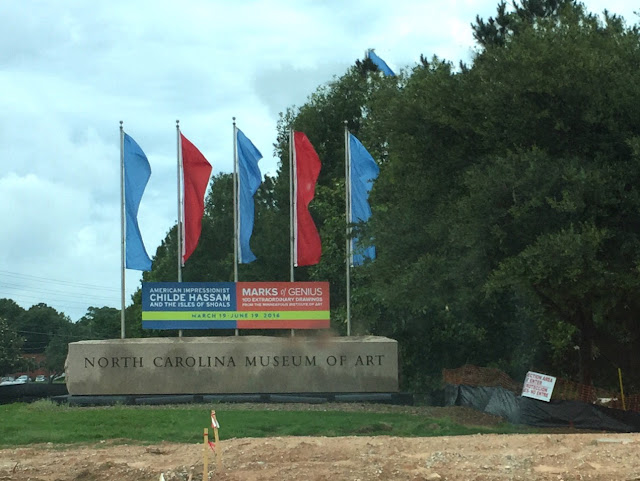 With the phone in hand I got myself to the North Carolina Museum of Art which is a rather fabulous place free to all and worth far more than the hour I dedicated to it. I got to see pictures by Damian Stamer shown here in front of one the exhibits (from the Internet, he wasn't actually there): 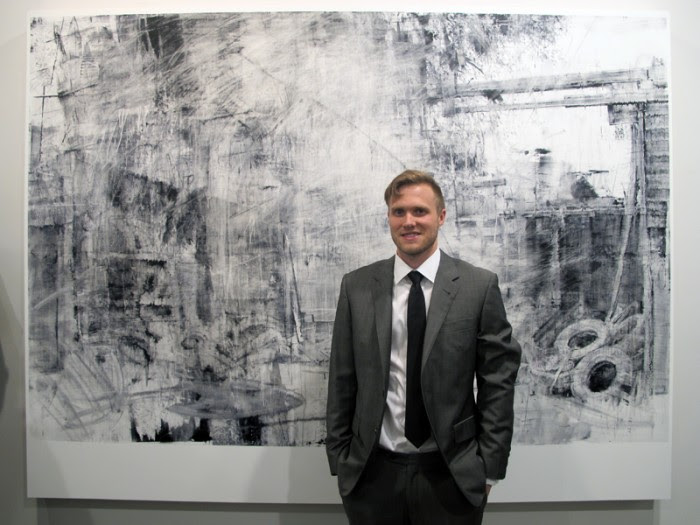 I wanted to see  more of his pictures of distressed  old buildings but the exhibit had more abstracts than I wanted to see. Also on display was the work of Burk Uzzle a noted North Carolina photographer famous for his picture of a couple under a blanket at Woodstock:

But whose work I appreciated through this picture on display> I stared at it for a very long time, Jesus and a Camo Truck:

Making pictures of ordinary America they said, a theme that appeals to me, I guess it's what I try to do on this page. So after digesting that lot (and lunch) I decided I had time enough for a short walk before catching the plane. Walking in the Umstead Park halfway to the airport made me realize how badly I have cabin fever in the Keys. 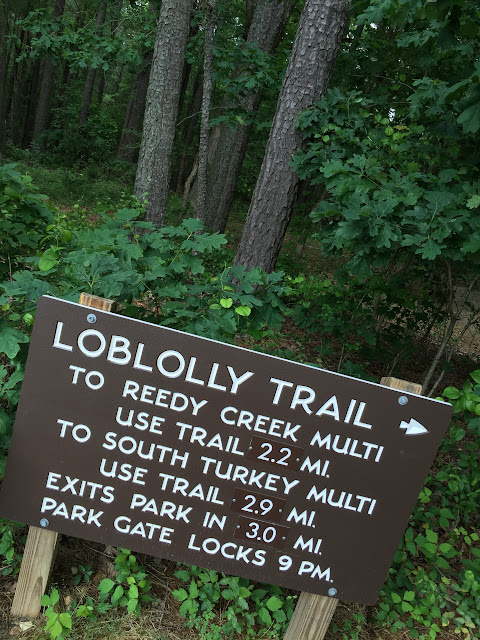 I didn't have long, perhaps half an hour, but I made the most of it under a canopy of startling green leaves. 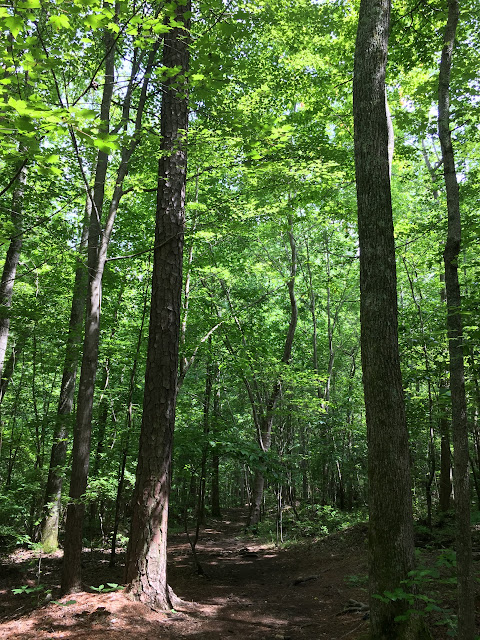 I wished Rusty were here but he will be Up North soon enough when we take off in the car for three weeks, so I enjoyed my solitude. 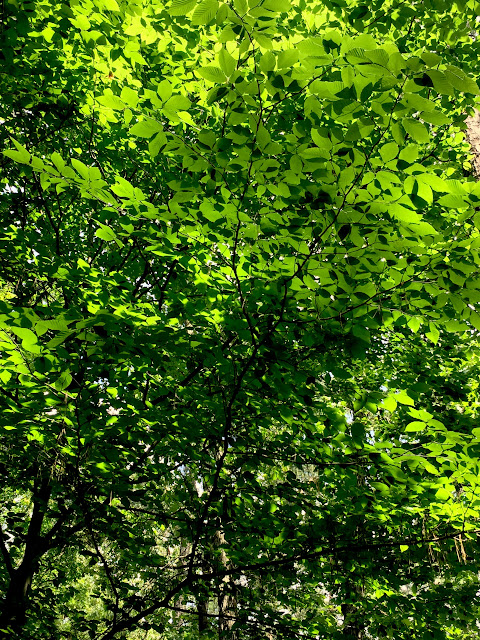 It wasn't particularly cold, rather warmer perhaps than I expected and still muggy despite the sunshine that had burned off the threat of thunder and rain from dark clouds overhead. 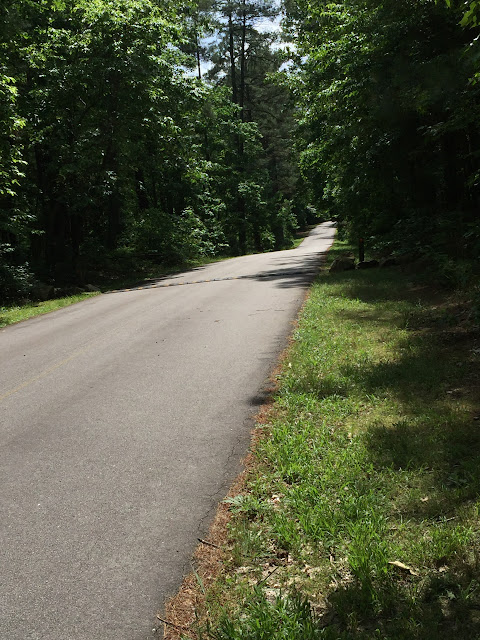 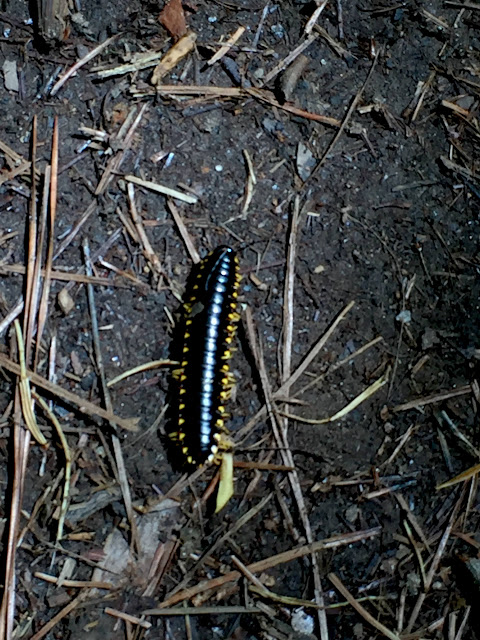 I followed the copious blue markers  through the woods though there was never any doubt about the location of the well worn trail through the trees: 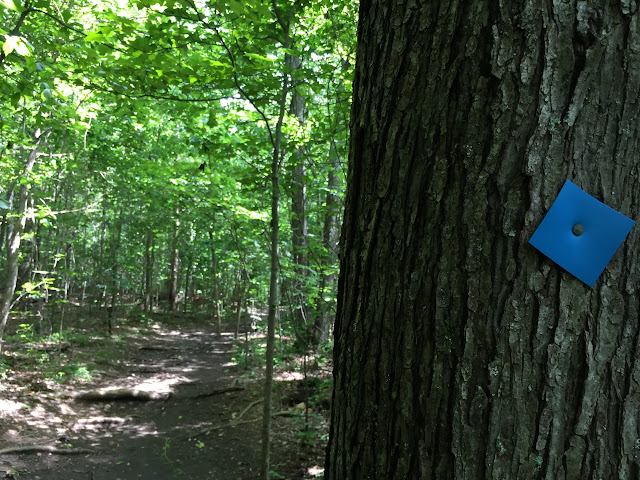 I met a party of militaristic characters in black and camouflage clothing and was passed by a couple of joggers. 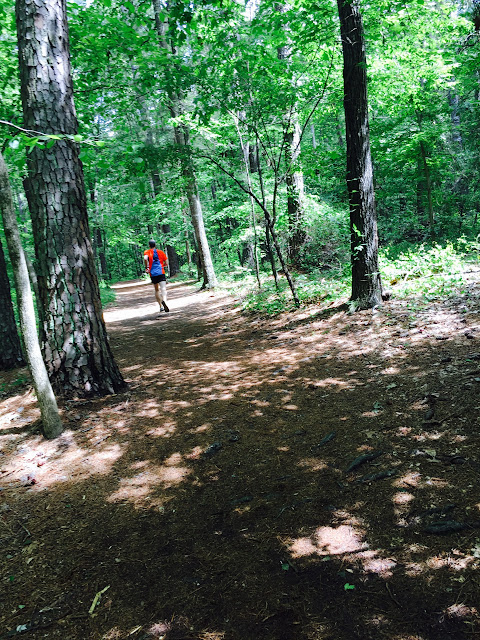 I got one quick black and white picture before the airport beckoned and the joke was that the flight, I discovered on arrival was an hour late. 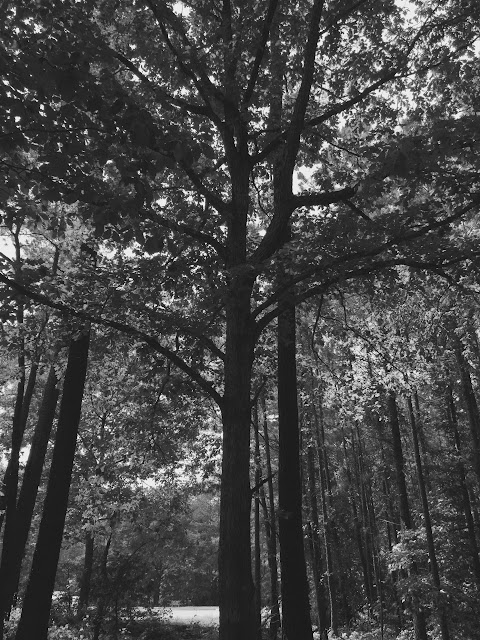 Wandering the vast hall on the way to finding a beer I spotted a couple of oddities. One was a guidebook to Cuba which was a first and on the wall in back an advertisement for Key West author Judy Blume, who is apparently much enjoyed by young people who know more of her than I do as I grew up in a different childhood world. 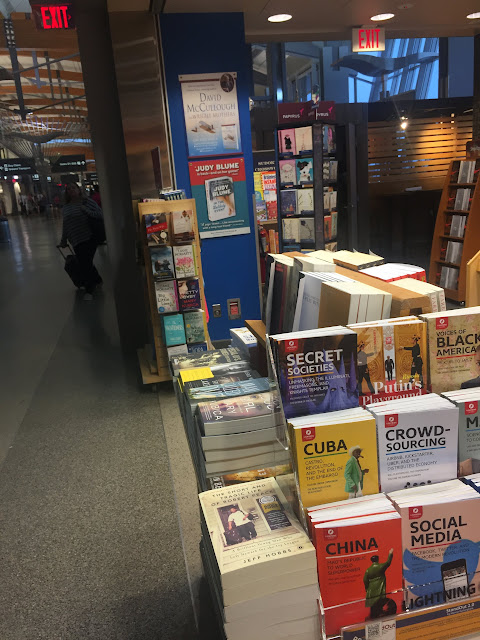 The flight is less than two hours but I sympathized with the young person in the seat in front who seemed to be trying to make a break for it, luckily without success. 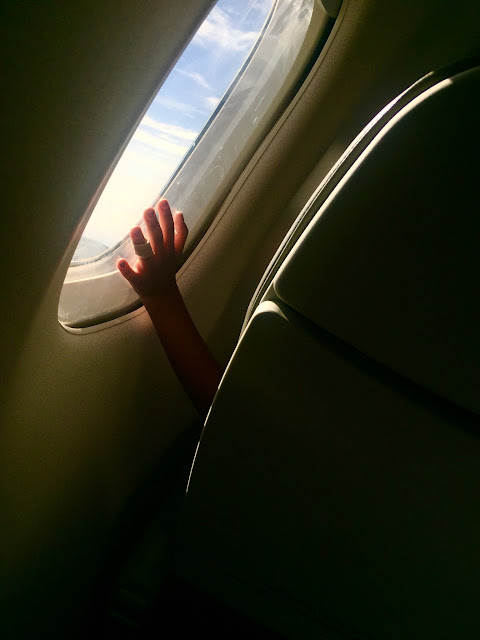 A three hour drive through the dark and a small brown dog was waiting up to greet me with much enthusiasm. Our first separation was over 36 hours after it started.

PS I got through North Carolina without falling afoul of House Bill 2 that requires people to be gender identified before pissing or something like that. I used the family toilet at the museum and snuck into the men's loo at the airport when no one was watching. Risque  stuff.

I hope the Feds bring common sense to these poor deluded fools.
Posted by Conchscooter at 12:00 AM 5 comments: