Adult Night Out In Key West

I am proud to say that Mexican food was my suggestion when herself asked where should we have dinner, and because herself grew up on California-Mexican food the answer was of course Lupita's on Bertha Street. 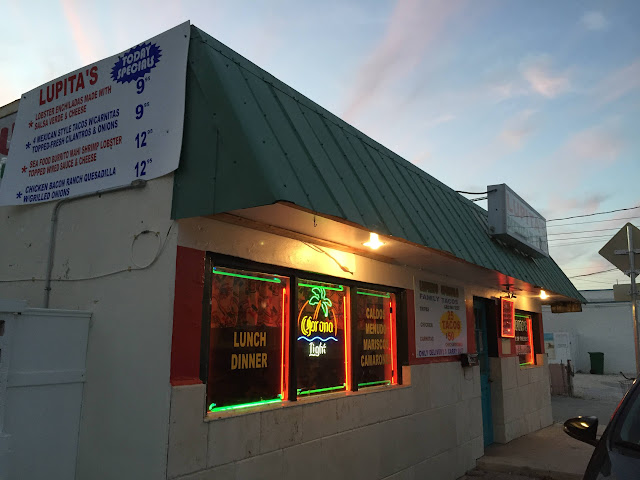 There are Mexican choices in Key West, starting with Chico's on Stock Island and Old Town Mexican Cafe on Duval as well as Amigos on Green Street, but Lupita's in New Town hits the spot for Mexican food of a certain genre. I like the decor, Mexican/ American diner style, and the menu with dinner items under twenty bucks and fresh fish on offer as you would expect in an island town. 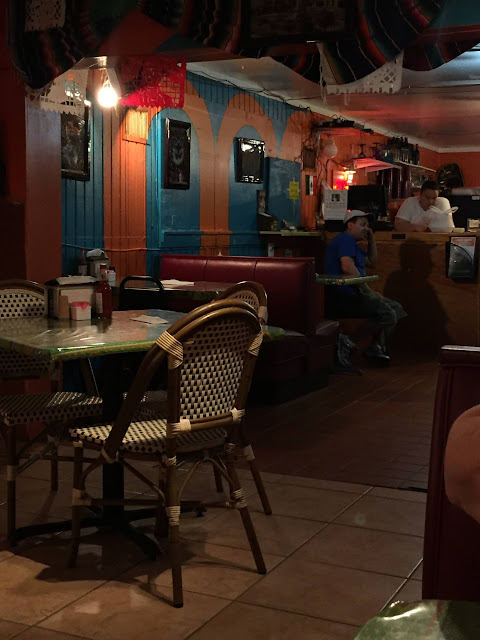 The Negra Modelo beer was on offer at two for six bucks so we shared them and each had a plate of spicy blackened fish tacos. They hit the spot even though I don't think of blackened as Mexican they were spicy and the salsa was fresh and the tacos were thick unyielding corn tortillas just as they should be. 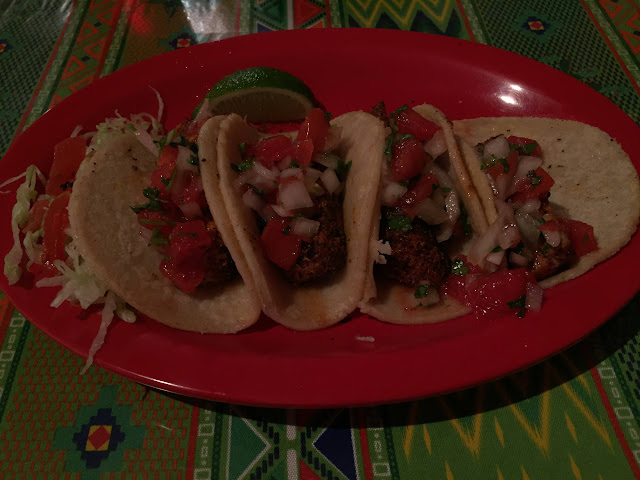 The winter weather has settled down and Key West has been lovely lately, sunshine breezes and cool nights, exactly what you want when you are driving your wife's convertible Fiat 500. Bertha Street connects Flagler to South Roosevelt and the beach and its probably overdue for resurfacing but it will have to wait it's turn. The traffic light at Flagler is notoriously short too so Bertha is not recommended unless you like sitting in traffic or bouncing on the pavement. Lupita's is recommended though. 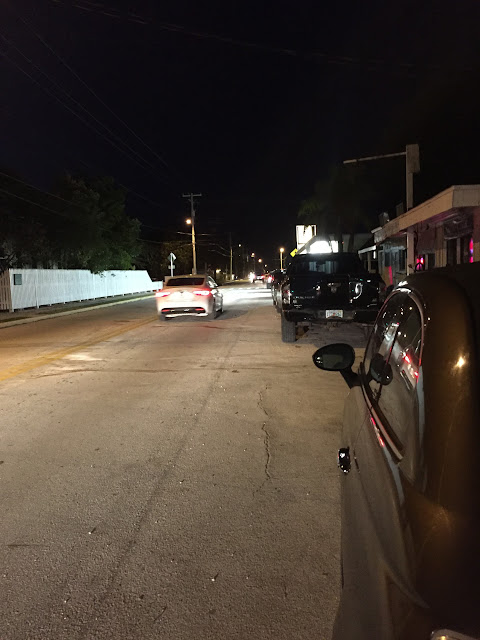 The night was pleasant enough we decided to take a walk at White Street pier where the wind was whipping up waves large enough to burst over the sea wall. It was refreshing. 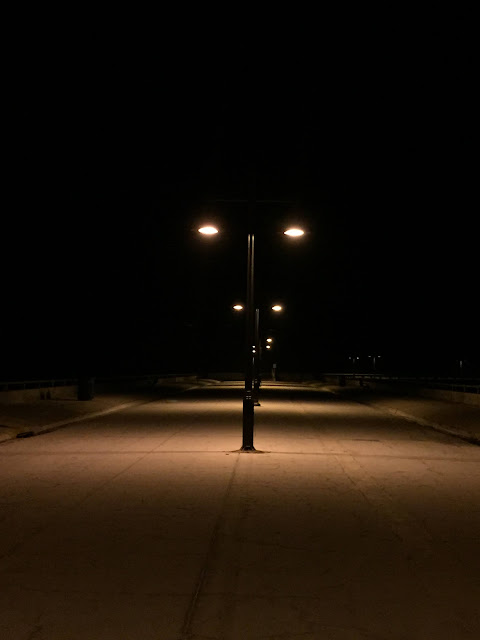 The plan was to fulfill our promise to spend one day each week doing something fun otherwise 911buddy and work suck up all our time if we aren't careful. It's winter so it's live theater season and we do our best to catch stage performances. This one was easy- free teacher night so we essentially got two-for-one tickets. 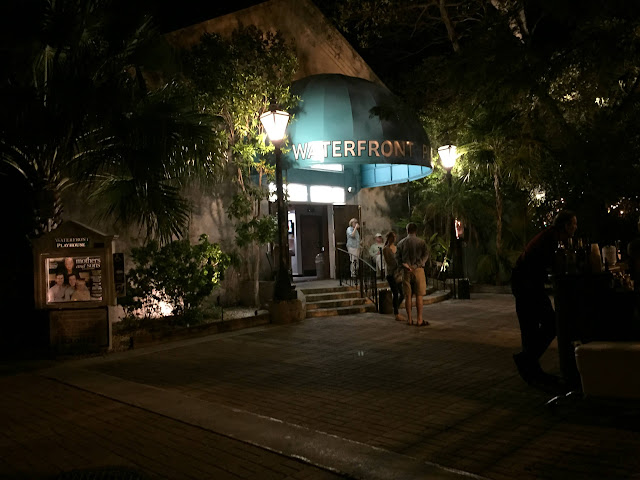 The play was a tough subject discussing the AIDS epidemic decades on as the various survivors detail their struggle to refashion their lives. Joy Hawkins plays Katherine the bereaved mother who confronts her dead son's partner and  in so doing reopens old wounds and questions about surviving death and moving on. Hawkins gives an outstanding performance as an uptight withdrawn angry resentful mother still unable to come to turns with her son's death, still looking around to cast blame. Hawkins is well known in Key West as a vital alive and charismatic performer and it was shocking and hard to watch her play this character so perfectly, with never a false note. 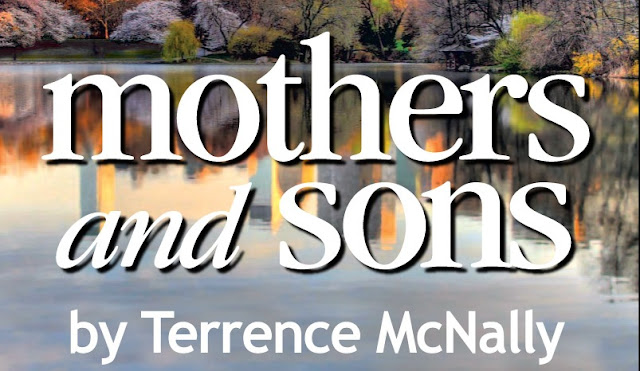 The cast included eight year old Jake Ferguson who performed flawlessly, completely unintimidated by the high powered cast he was working with and gave the story the depth it deserved. Cal and Will played by professionals Matt McGrath and Trey Gerrald weren't going to miss a beat either. The ensemble was terrific enough that sitting in the audience one got the uncomfortable feeling of being a peeping tom in a private family drama. It was 90 minutes of spellbinding intimate revelations. Happily there was no intermission and thus the spell was not broken from beginning to end. We reeled from the theater. 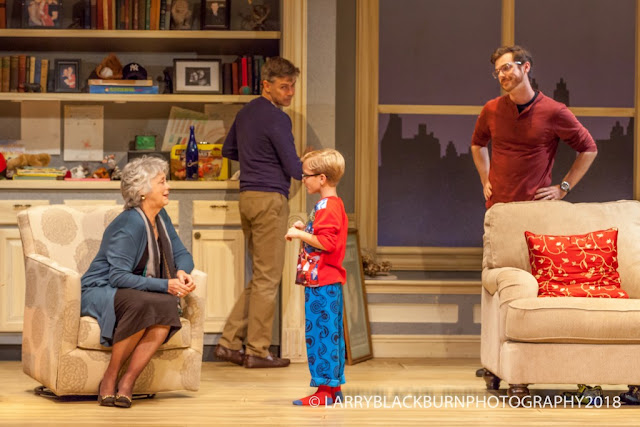 Pictures Courtesy Waterfront Playhouse web
I loved this review from the Chicago Tribune (LINK) from which I excerpted this discussion of Tyne Daly's performance as Katherine.

"My eyes were moist through a good amount of "Mothers and Sons," frankly, even in its more manipulative sections (especially those, really, McNally being so adept at making us feel the weight of age and experience). The show works not least because of the creative team's enormous sympathy for his anti-gay, fictional mother, a character whose pain has ennobled. In the play's most eloquent section, Daly's Katharine gets to argue that partners move on, find other lovers, marry, adopt, gain a life pockmarked with slowly fading grief but a life, nonetheless.

Bereaved mothers, though, are not so lucky, especially if they refused to really know their sons when they were alive." 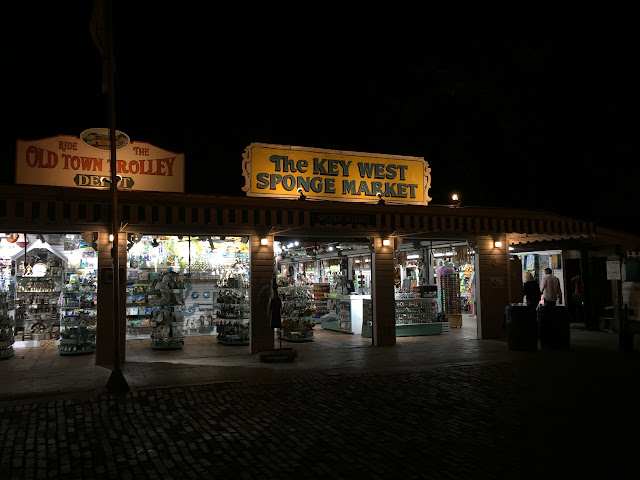 It was of course a lovely wander back to the car. Thoughtful but lovely.
Posted by Conchscooter at 12:00 AM 4 comments: