You might think I envied the people on two wheels but I didn't as I had already ridden the desert quite enough for one vacation. It wasn't hot or windy or unpleasant under hazy skies but I had yet to discover the cheap rental car didn't have cruise control so I thought I was better off in the gutless Nissan Versa. 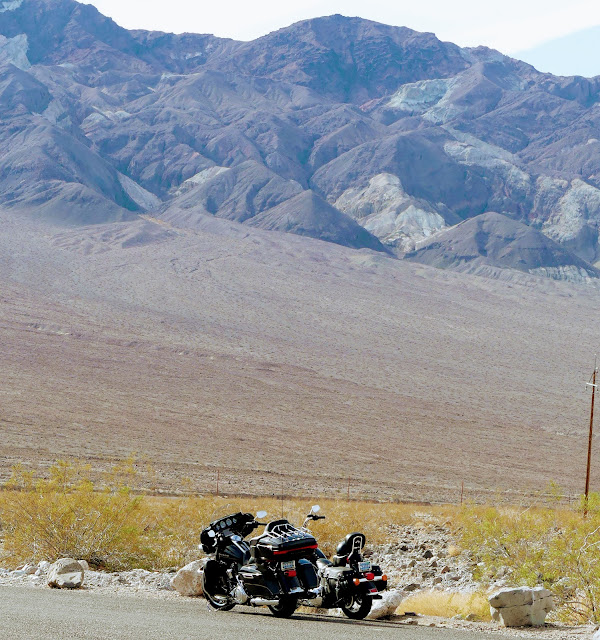 It's a two hour trip from Las Vegas to Death Valley via Pahrump ("pa-RUMP") small desert outpost not far from the California state line. Here there is gambling prostitution and legal weed and over there they only have legal weed and state income taxes. You decide. There's small sign on the road heading west and it reads simply "Inyo County" as the quality of the pavement deteriorates. Welcome to the Golden State where my wife grew up. The roads continue long and straight and it occurred to me that Las vegas would be a rotten place to live and ride a motorcycle. Besides I like trees and I don't like dry desert air as it makes my delicate skin itch. 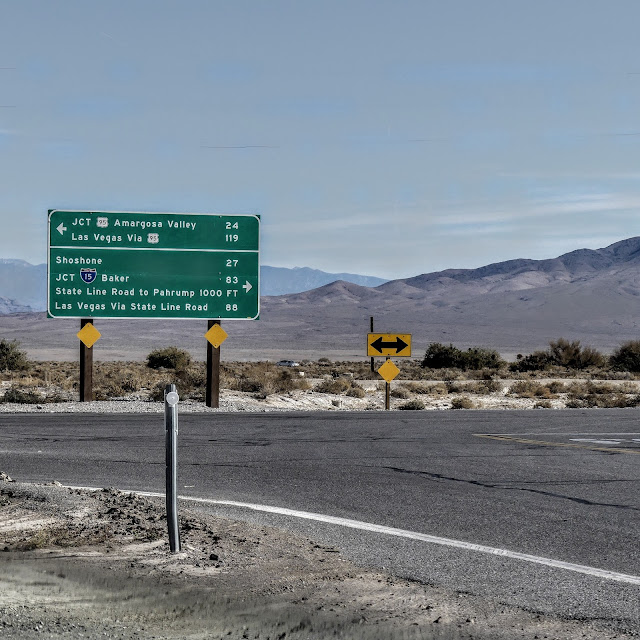 But it sure was fun to immerse oneself in an alien world for a few days and this is about as far from the green wet Florida Keys as you can get. It's been years since either of us was in Death Valley and this short quick trip was a reminder why certain places are set aside for the public pleasure. It is a different world within these preserved lands, stark beauty worth preserving. And paying for, twenty five bucks for a week's worth of re-entries: 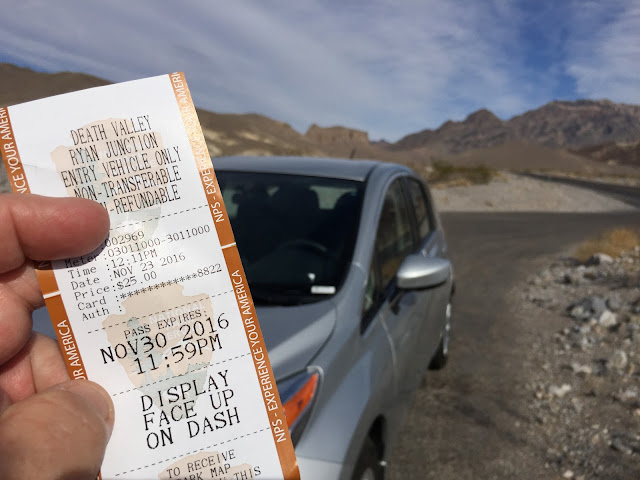 This wasn't going to be a leisurely visit but we like our road trips and we decided that even if we couldn't make Dante's Overlook and Badwater (the lowest point) we would see what we could. 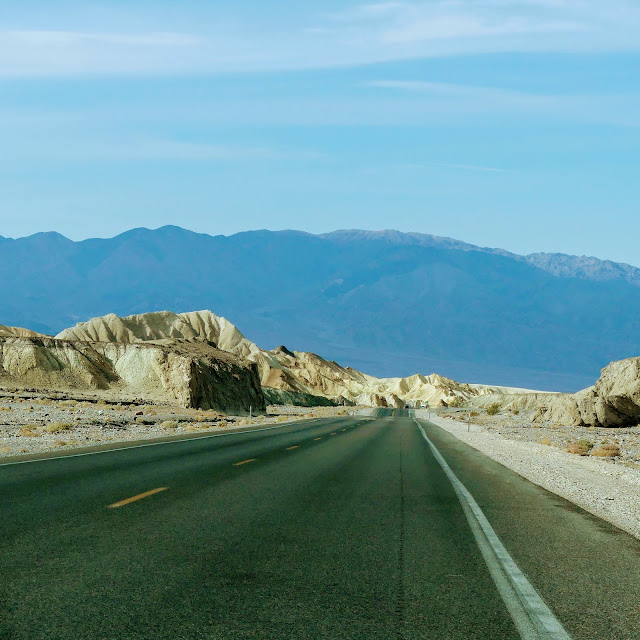 Zabriskie Point was on my list of places to see and we actually made it here the day before Thanksgiving. 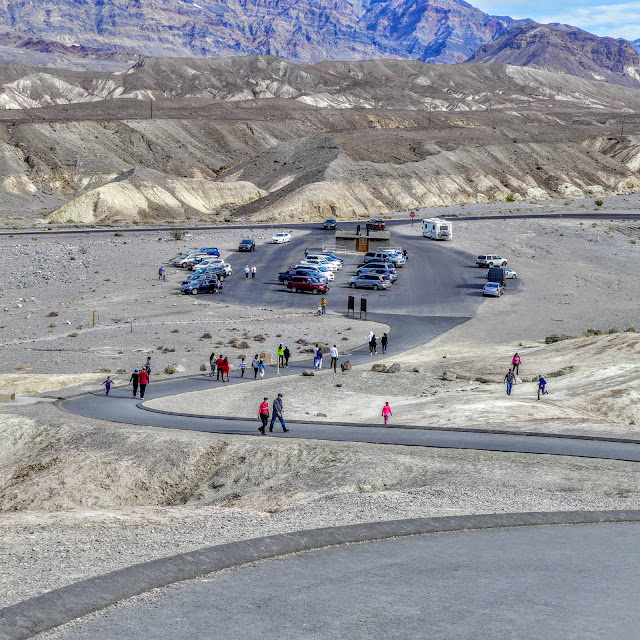 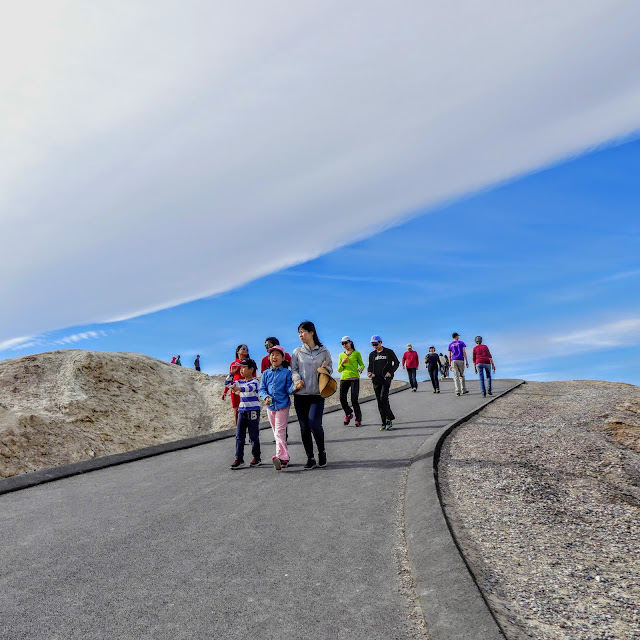 Amazingly enough they encourage walking out on the trails through the badlands and there is even a five mile loop down the hillside which I dearly would like to walk. Except pets aren't allowed so scrap that. Walking without Rusty seems stupid to me. 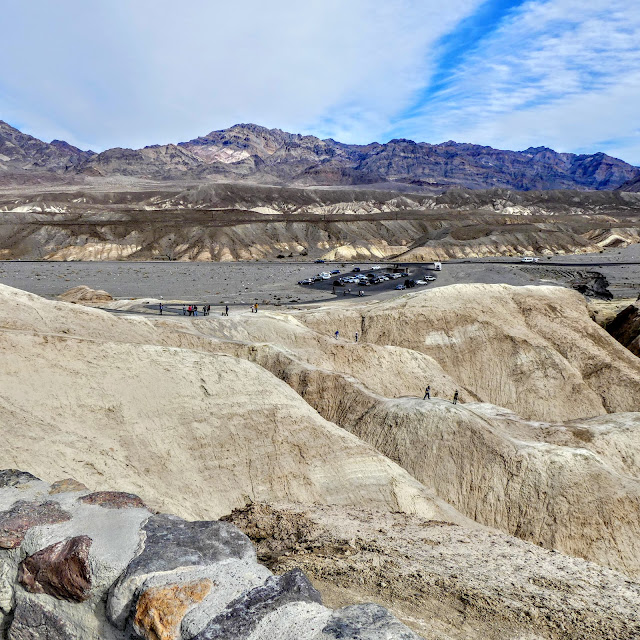 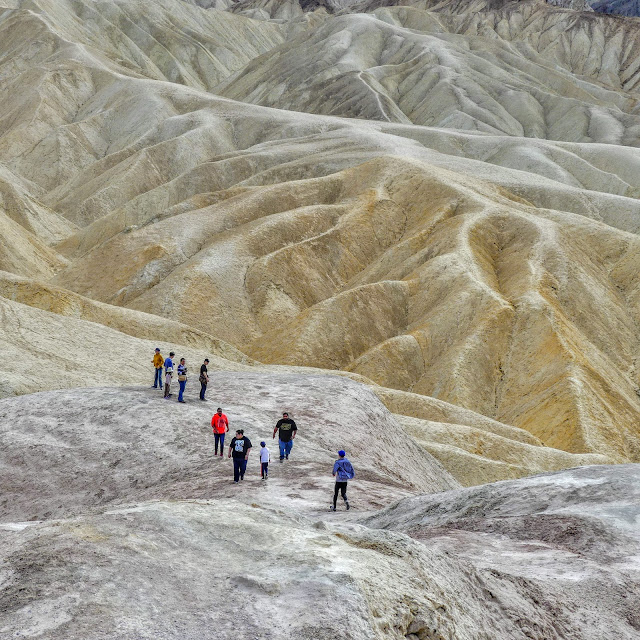 My telephoto lense from a long way away: 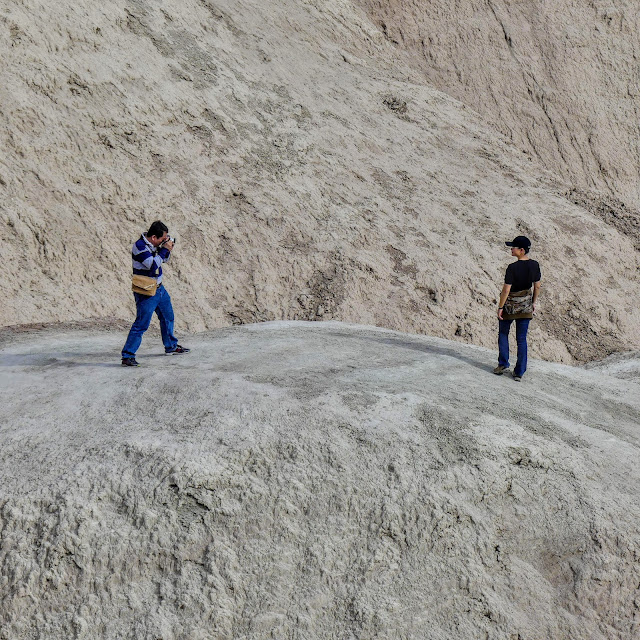 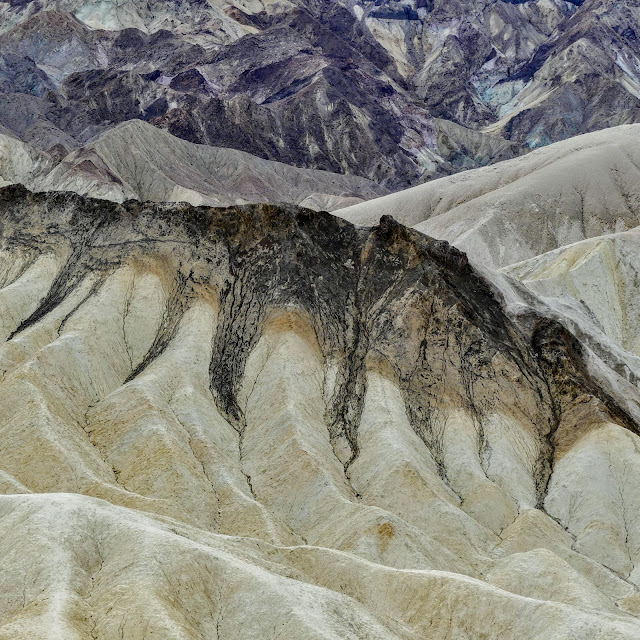 Despite all the people these strangers were filled with silent wonder. 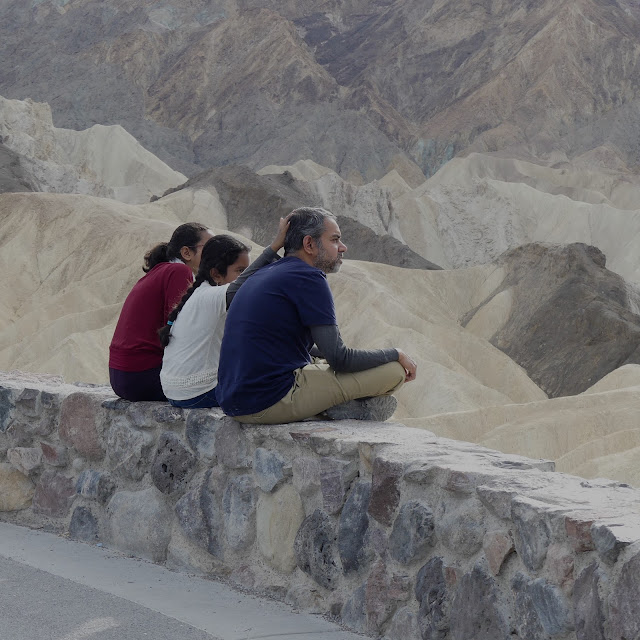 The drive from there to Furnace Creek took us through the now familiar burnt plains dotted with sage bushes and not much else. 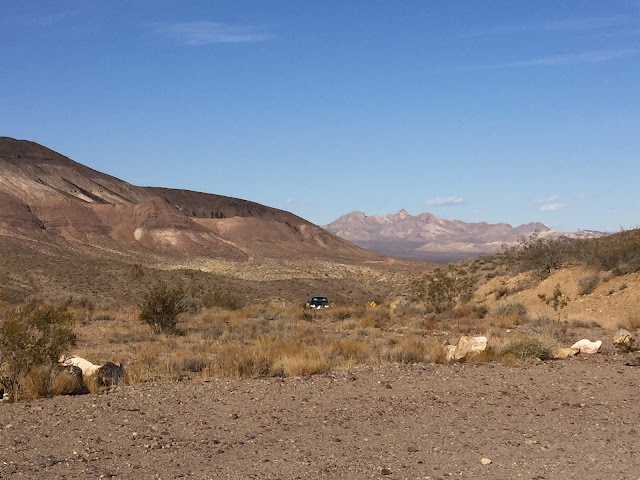 I thought it might have been nice to take a room and pause for a nap, then a short drive to the lowest point followed by dinner and some star gazing...Dream on we had places to go and things to see a hundred miles away. 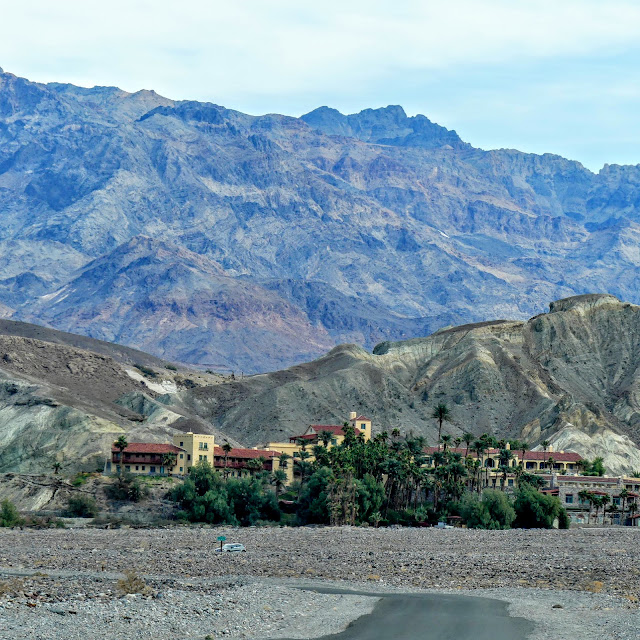 My indefatigable Tripadvisor wife located Indian food which sounded just the ticket, weird fast and filling. A Tripadvisor review:
After all the disappointing meals we had in Furnace Creek, we made our way toward the Indian Taco sign. I'm glad we did. It was the most enjoyable lunch we had during our visit. Menu is limited to frybread taco, frybread without the taco, and many flavors of shaved ice. The taco was large and delicious. I regretted not getting some plain frybread to go. Highly suggest having a taco for one of your meals in Death Valley.
"They have a Key West problem" my wife reported after standing in line for a while. "Someone forgot to show up for work." Consequently the fast food wasn't quite as fast as you might think. Which wa sokay. I sat and drank a Coke we got from the Pepsi machine. 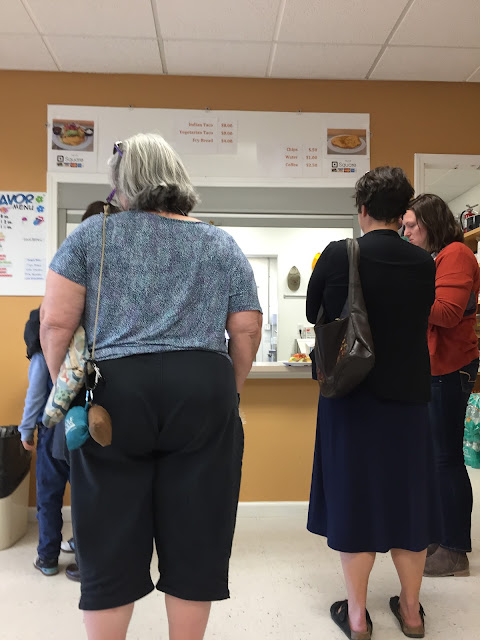 In retrospect the Frybread taco was perhaps rather more robust than one might imagine if one imagines a fusion of Indian food with Taco Bell.  I made my way through it and surprisingly suffered no ill effects if you don't count the coma I struggled to fend off as we made our way back to Las Vegas on long straight roads through the sagebrush desert. 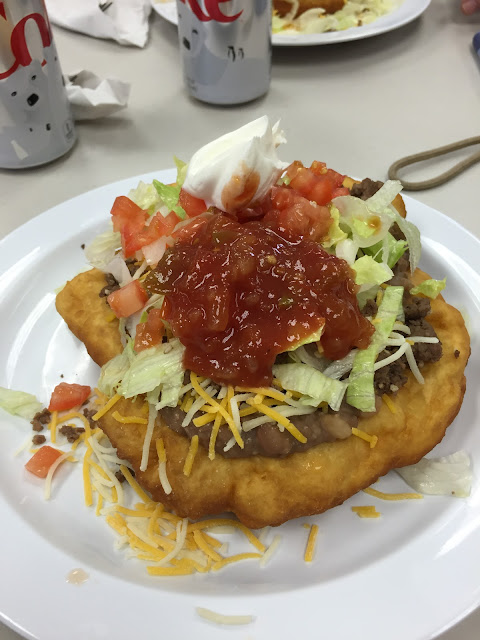 The Nissan Versa was a base model I have not seen in years and hope never to see again. It lacked every possible amenity including horsepower for the long uphill grades through the mountains. More seriously it had wind down windows and no central door locks and no sign of cruise control either, or satellite radio. Yup we suffered but when my wife asked me to kindly turn off the preacher promising damnation through the radio I did point out that it was her rental choice. "Never again" she muttered " And this wasn't one of my famous seven dollar rentals."  I know it sounds unlikely but she has rented cars for almost nothing and this was not one of them. 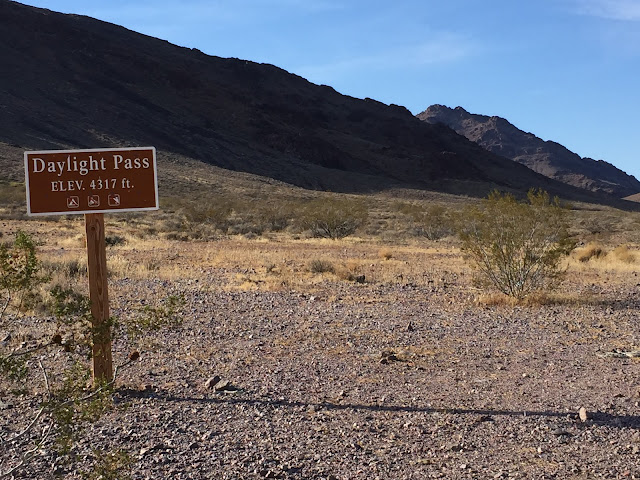 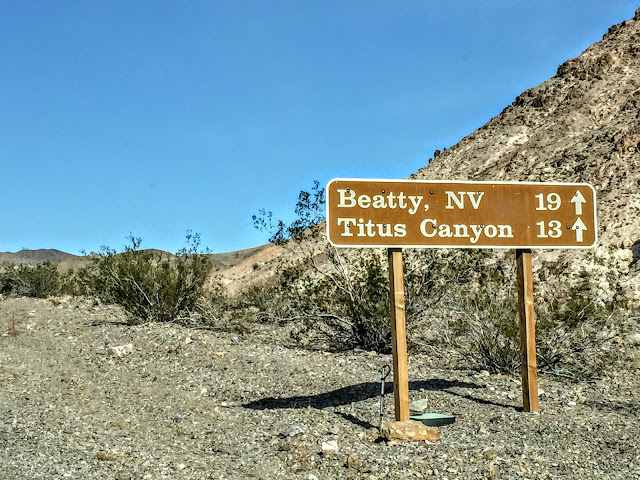 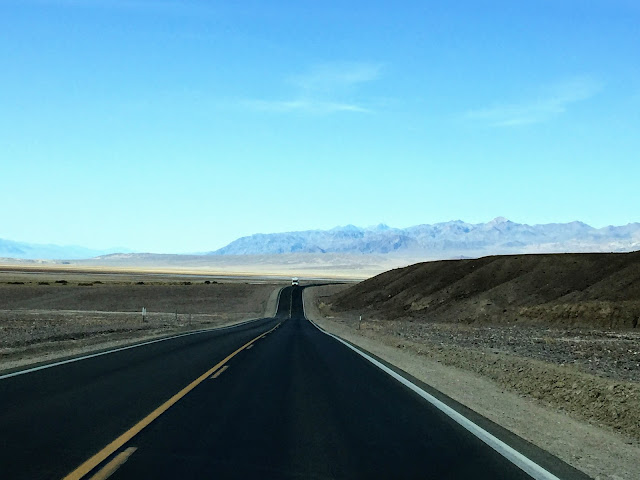 I thought a car parked at the state line was a cop so instead of blowing through at 85mph taking advantage of the downhill grade we puttered along like a couple of Florida retirees at 57 miles per hour, burning no visible gas as we went. We got back to Las Vegas with 55 miles left in the bottomless tank. 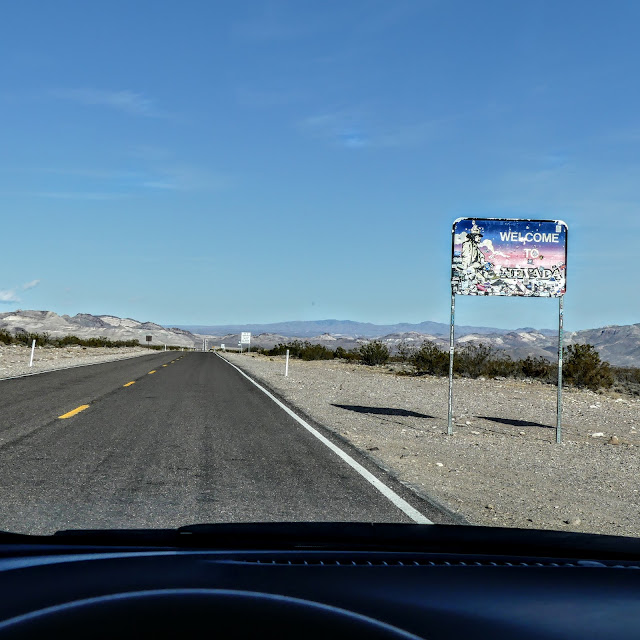 Our goal was Beatty Nevada  a small mining town that has shrunk even further after the gold mines dried up. Locals call the place "bay-dee" but I signed the guestbook anyway with my own spelling and told the nice lady at the museum that I pronounced it Bee-Tee. She mulled it over for a while. 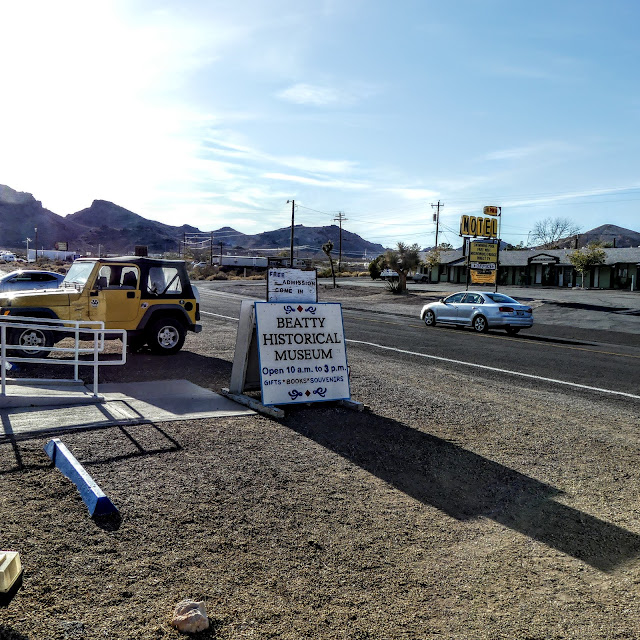 The women at the museum were discussing plans for Thanksgiving in the town and the knotty problem of one of the city's 800 residents who lived alone and was not happy getting ham instead of turkey. My wife said it sounded like the TV show "Northern Exposure" about a small town in Alaska. 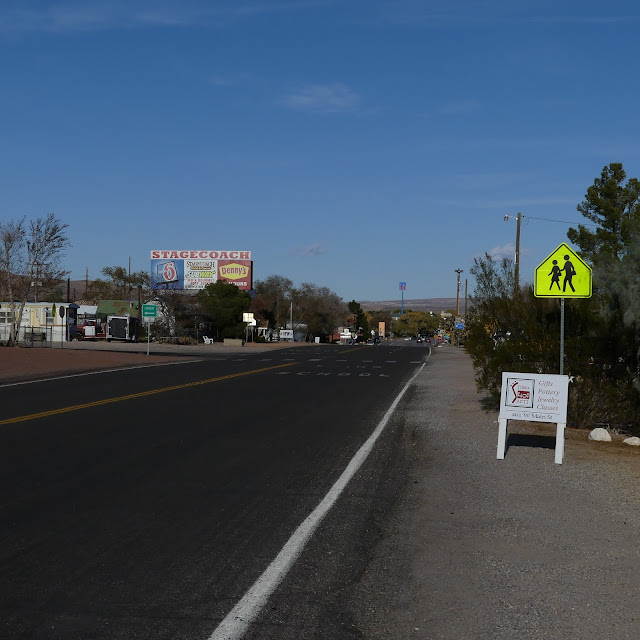 "The Keys?" the museum woman said wistfully, "I'd like to go for a visit one day..." I sympathized with her considering the rather bleak world she lived in but I made deprecatory noises as we contemplated  the dusty landscape of this speck on US Highway 95. 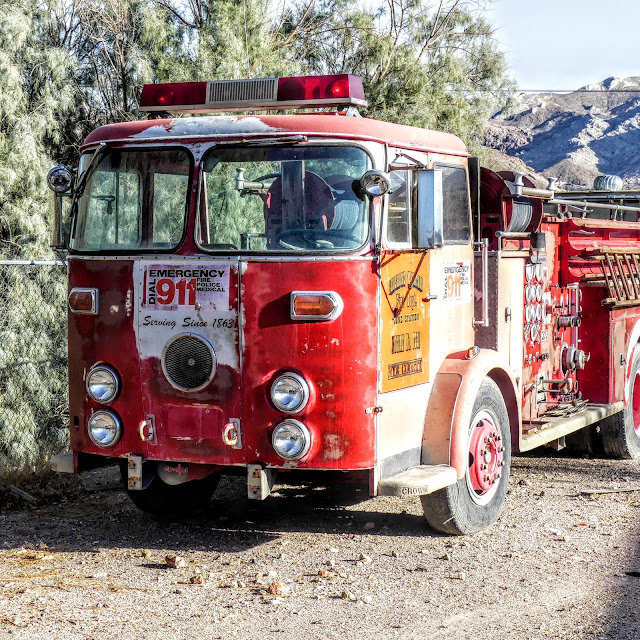 We had to take a short tour of the back streets to double back to the museum which we passed accidentally in an unnatural burst of speed from the Versa. Many of Beatty's residents live lives of what looks from the outside to be hoarding squalor.  I have no idea how one makes a living out here but however it's done they don't seem to be in on the secret either. I wonder if Washington will ever see these people, no matter who is charge. 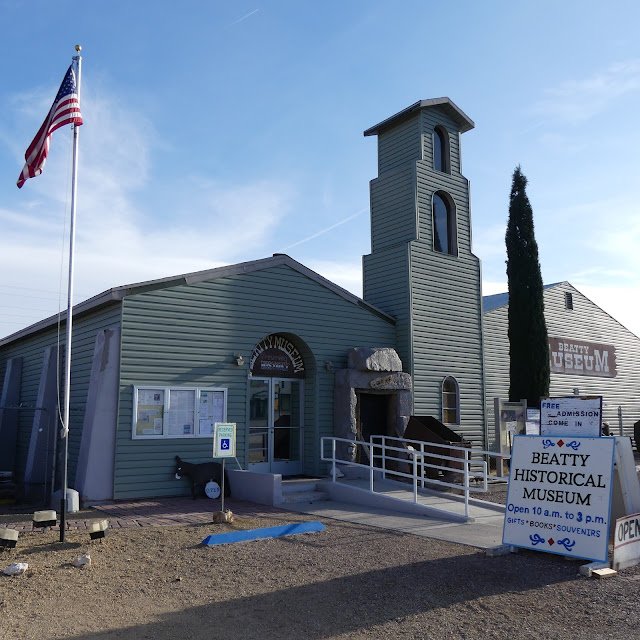 The man this town was named for the grandiloquently named Montillius Murray Beattie one of three white men in the area. He married a Paiute woman whether in deference to the melting pot theory or for lack of choice isn't clear. In the event he bought the land with the water and his buddy bought some of it and named the town for him which was created around 1905. 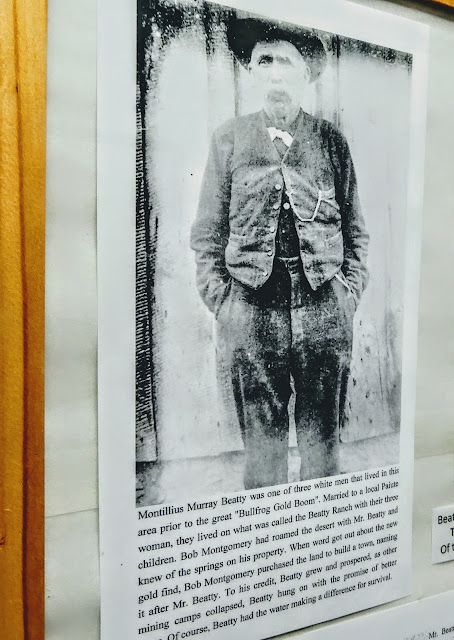 It was not a rich cultural landscape back then and it isn't now.  It looked cleaner back then probably because there was less junk to trash. 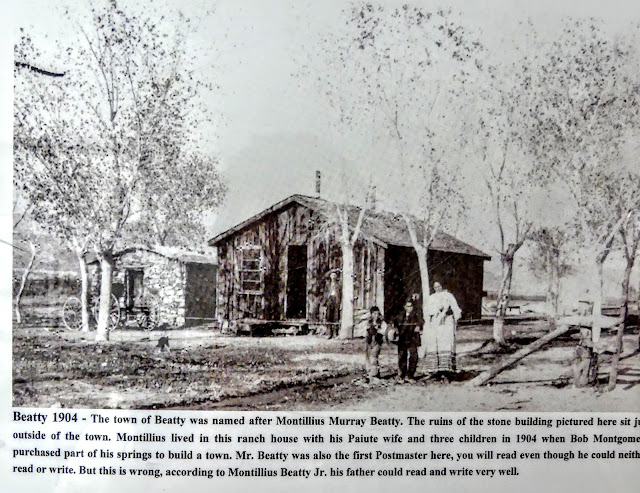 The museum was a fascinating hodge podge, a diary of a town's life. 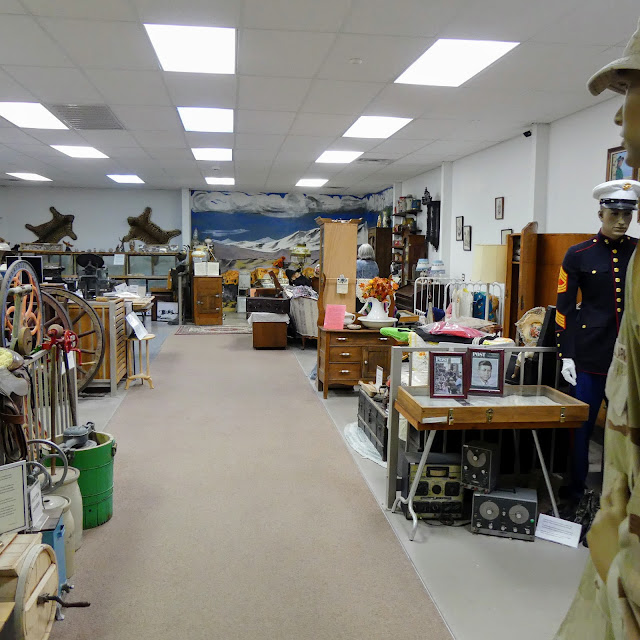 We bought a  souvenir, I signed Beattie, Key West,  and we drove off back into...the sage filled desert. Spectacular views. 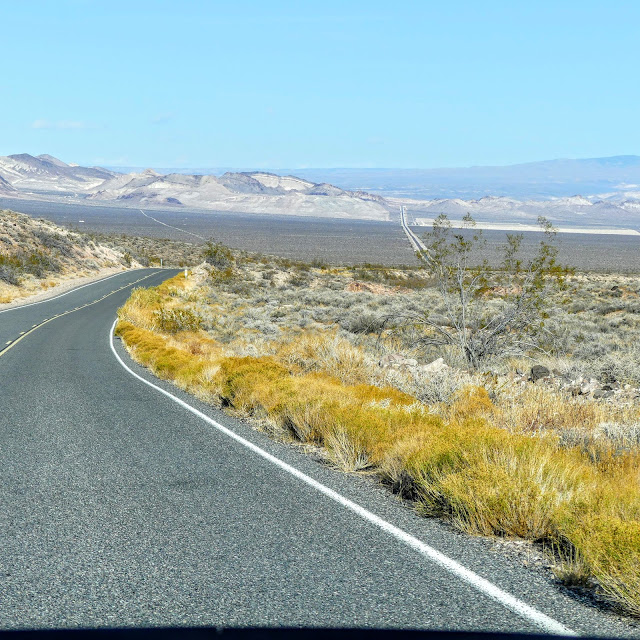 Back to Las Vegas, past military installations, lonely gas stations, attaching ourselves to lines of cars rolling at 85 mph which the Nissan could hold on level ground. Racing the sunset on the Wednesday night before Thanksgiving, miles from festivities, alive on the road. It was great.
Posted by Conchscooter at 5:40 AM 2 comments:

This shop is the only motorcycle dealership left in Key West. Riva South a Suzuki dealer is in Key Largo a hundred miles north and there are various dealers in Miami and Fort Lauderdale. The Yamaha dealership is run by a notoriously cranky man whose crank apparently got turned a little too far...but like they say political expression is never good for business. 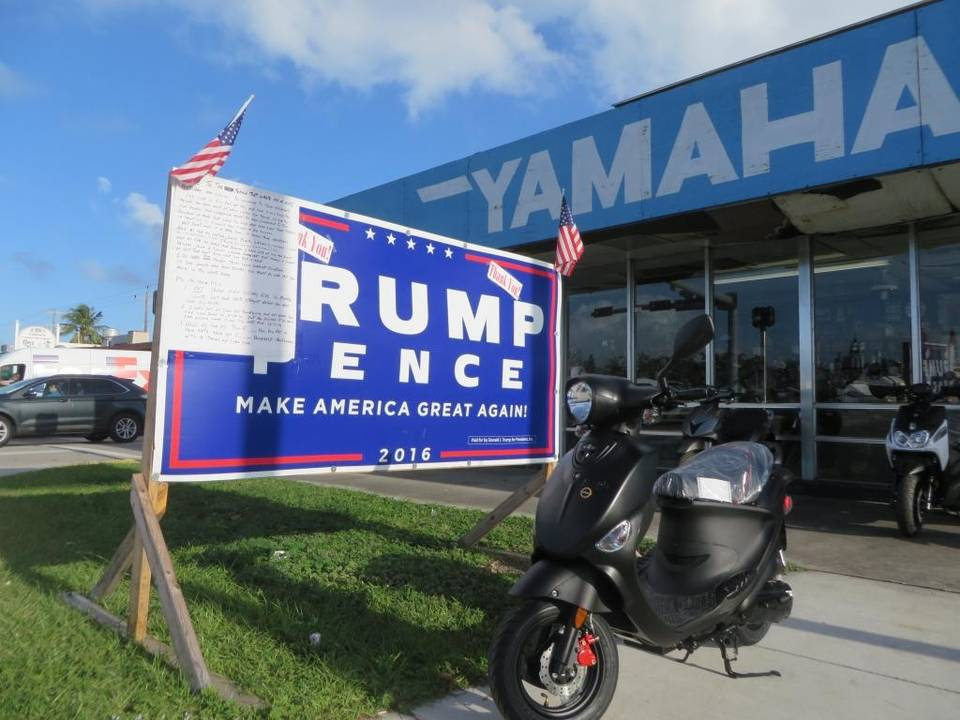 For a brief time this week, Alvin Crockett posted an angry handwritten letter to a political critic on the Trump campaign sign he put outside his scooter shop at 2222 N. Roosevelt Blvd. Gwen Filosa Keynoter
BY GWEN FILOSA
gfilosa@keynoter.com
Joni Bernstein says she just couldn’t take it anymore.
For Bernstein, a Hillary Clinton supporter and activist who attended the Democratic Convention in Philadelphia and marched with Black Lives Matter, said she had to confront the owner of the large Trump/Pence campaign sign planted outside a scooter shop on the city’s main artery, North Roosevelt Boulevard.
“It felt like a punch in the stomach,” said Bernstein, 52, a massage therapist and 20-year resident of the island. “We’re the walking wounded.”
So she tried to reach Alvin Crockett, of Florida Keys Cycles, 2222 N. Roosevelt Blvd., but left an unsigned note at his shop telling him the Trump sign may as well be a swastika in her eyes and adding some four-letter words.
What could be logged as just another ugly post-presidential verbal standoff between a proud Trump fan, outraged at being called a bigot for his decision at the ballot box, and a pro-Clinton liberal who says such signs are still up only to taunt those devastated by the result.
But in Key West, the election did more than shock Trump opponents. For decades, a safe haven for the LGBTQ community and an official motto of One Human Family, Key West is a place where people care more about what fund-raising party you’re going to than your ethnic heritage.
Crockett replied in kind but publicly, posting a handwritten, obscenity-laced letter on his Trump sign for several hours Nov. 30 that stated he was going to take the sign down Nov. 28 but now will leave it up until Dec. 5.
“I only hate two people,” Crockett wrote. “Those lying, corrupt Clintons.”
In response to being called a bigot, Crockett added his girlfriend is a Cuban and, “The guy who runs my shop is a Jew,” and then wrote his critic should do something that cannot be printed in this newspaper.
He redacted the F--- words he included and before sunset removed his letter.
A local church hosted a meeting designed to foster communication between the politically warring on the island. About 30 people, mostly white women, turned out and each took a turn sharing about their reaction to the election. One woman nearly broke into tears.
An author of a book on grief offered to start a support group but said she couldn’t find enough takers.
Florida and Monroe County went to Donald J. Trump in the Nov. 8 election, while Key West remained a deep shade of blue with Hillary Clinton winning all 10 city precincts and the Stock Island firehouse voting spot.
Everything north of mile marker 5 went to Trump.
Key West city officials on the same day Crockett posted his letter announced all political signs must come down within 30 days of an election under state law. Starting Dec. 8, the city will enforce that law, said city spokeswoman Alyson Crean.
Gwen Filosa: @KeyWestGwen
Posted by Conchscooter at 5:39 AM 2 comments: